Cap of Liberty drawing on the Peterloo cane, around 1819 © People’s History Museum

On the 200th anniversary of the Peterloo Massacre Museum Crush has teamed up with Manchester Histories, which has been leading the Peterloo 2019 programme of events, to highlight some iconic museum artefacts that help to tell the story of this milestone moment in the history of our democracy

Karen Shannon, CEO of Manchester Histories, has been looking at some of these fascinating objects. With few artefacts to shine a light on this chapter of history each plays a significant role in helping to tell the story of 16 August 1819. This was a day in which more than 60,000 people assembled in Manchester. They were united in peaceful protest to demand rights and representation at a time when working people had none. When the authorities sent in the troops to break up the crowds the bloodshed that followed would result in 18 people losing their lives and around 700 people suffering injuries.

The objects below from museums, libraries and galleries represent some of the key moments in what took place.

This handbill was produced to warn people against attending an illegal meeting planned in Manchester for 9 August 1819. As a result the meeting was postponed until 16 August.

The names of the Manchester magistrates are listed below, including that of William Hulton who would also be the person to sign the order to send in the Yeomanry and the warrant for Henry Hunt’s arrest.

Carte de visite. Portrait of an old bugle. The photographer is Squire Knott. Front is captioned ‘ Knott, Yorkshire. St Oldham.’ Reverse in pencil ‘reputed to have been used… on Tandle Hill’.

This battered and unremarkable bugle may once have summoned crowds to political meetings on Tandle Hill, just outside Oldham. Perhaps it was even sounded at St Peter’s Field on that sunny day in 1819.

Writing in 1878 a correspondent in the local newspaper recalled the events of Peterloo and stated that “the reformers of Royton were in the habit of rising as early as three or four o’clock on the summer mornings, to drill in the Rushpenny, near Tandle Hill. On these mornings an old army bugler of the name of Tom Bluett would call them to arms by the sound of his bugle.” 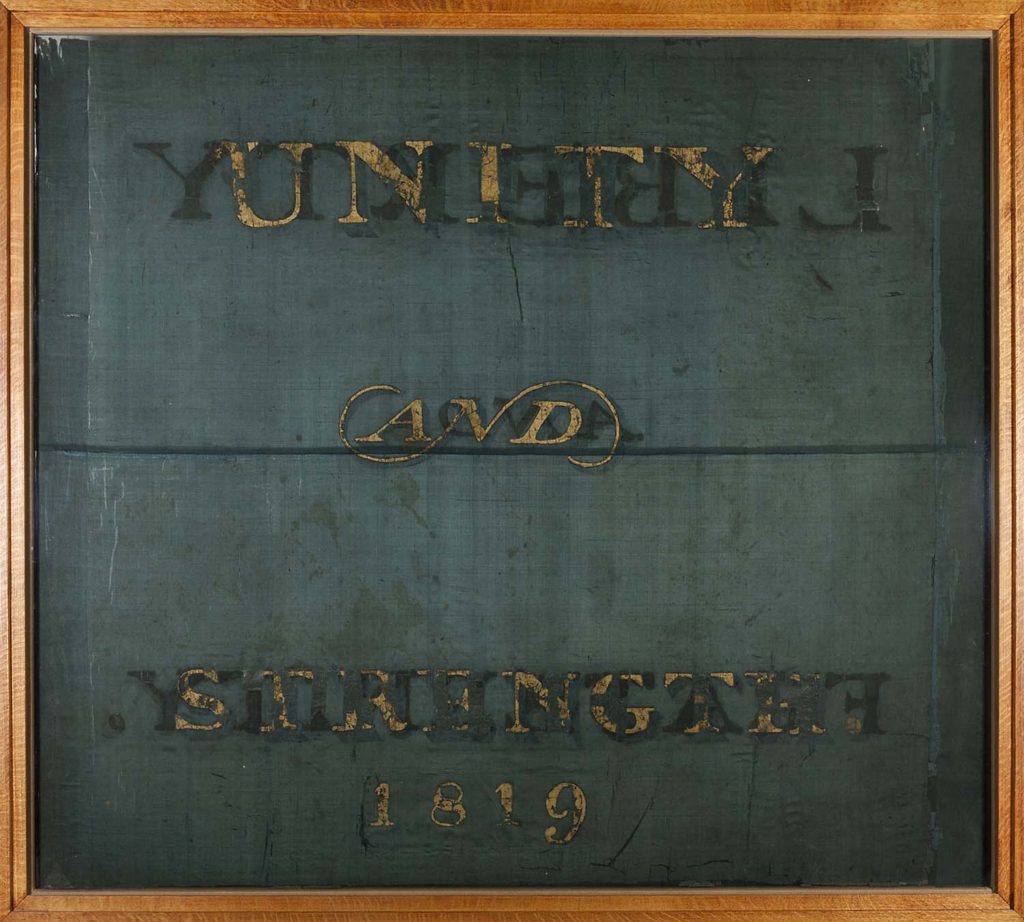 The Back of the Peterloo Banner. The front carries the slogan Liberty and Fraternity. Courtesy Touchstones Rochdale / Link4Life

This is the only surviving banner from the Peterloo Massacre. Made from locally woven blue silk and hand painted with gold lettering this banner was one of two carried by the Middleton contingent as they marched into Manchester in August 1819. The other, a green one inscribed with ‘Parliaments Annual’ and ‘Suffrage Universal’ was cut from Thomas Redford’s hand by the yeomanry soon after violence broke out. Bearing the slogans ‘Unity and Strength’ and ‘Liberty and Fraternity’ this banner is believed to have been smuggled off St Peter’s Field under a young woman’s petticoats before being reunited with the group, carried back into Middleton and subsequently hung in the Suffield Arms pub. Understandably the banner is a huge source of pride for the people of Middleton and for years hung proudly in the local library.

This map shows the area around Peter Street where the Peterloo Massacre took place. 18 men, women and children would lose their lives as a result of what took place on this site and over 700 received extremely serious injuries. All in the name of liberty and freedom from poverty.

The only remaining structure from the event is the wall of the Quaker Meeting House garden that runs down Bootle Street.

It is believed that this cane was carried by Charles Worsley at Peterloo. Like so many other protestors, he would have been dressed in his Sunday best with the walking cane carried as a part of his attire, as was the fashion of the time.

Observers said one in ten of the protestors had walking sticks and canes, similar to this object, which led to claims that the protestors were armed.

The cane is decorated with liberty caps and a flag alongside a list of names that includes Worsley and radical speaker Henry Hunt. Significantly, there is also a carving that reads: “I was one of the dreadfull [sic] bludgeons seen on the plains of PETERLOO”. Could this have been a satirical reference to the exaggerated claims that the protestors carried weapons?

This oil painting depicts Hugh Hornby Birley, a 19th century Manchester mill owner, who was captain of the Manchester and Salford Yeomanry.

On 16 August 1819, it was reported by observers that it was Birley who gave the orders for the local government forces to attack the crowds. He was said to be the first of the cavalry to arrive at the hustings in an attempt to arrest the radical speaker Henry Hunt, attacking anybody in his way. The eyewitness reports also indicate that it was Birley himself who was responsible for some of the deaths and injuries of the men, women and children present.

Birley was eventually brought to trial, with three others from the Manchester and Salford Yeomanry, three years after the Peterloo Massacre. Despite shocking witness statements, they were all acquitted. Their violent actions, it was held, were justified in dispersing an illegal gathering.

Birley’s legal costs were covered by the government of the time, and his career would continue to flourish; eventually he became a magistrate and the Deputy Lieutenant for Lancashire.

Shelley’s poem The Masque of Anarchy consists of 92 verses written in September 1819, immediately after he heard about the Peterloo Massacre. It has been described as ‘The greatest poem of political protest ever written in English’. This first edition was purchased by the Working Class Movement Library using funding from the National Lottery Heritage Fund’s Collecting Cultures programme.

Following the Peterloo Massacre, hundreds of these handkerchiefs were produced, but few have survived. They would have been carried by radicals and may have been sold to raise funds for the injured.

Following what happened in Manchester, the government started clamping down on radicals, so carrying something like this would have been dangerous.

The three phrases repeated around the margin of the textile have echoed down the ages; ‘Universal Suffrage’, ‘Annual Parliaments’ and ‘Election By Ballot’.

Henry Hunt marked the first anniversary of the Peterloo Massacre with a black border around his journal entry for 16 August 1820 and the words:

“I eat no meat this day.
I sincerely pray that I may live to witness the [ ] punishment of every scoundrel that was instrumental, an accessory or principal or in any remote degree concerned in the infamous, cruel, cowardly, unprovoked & premeditated assassination, cuttings & murders of peaceable men, women & children at Manchester on this day twelvemonths.”

This photograph was taken on 27 September 1884. Almost all of these eleven men and women had been teenagers when they attended the meeting on St Peter’s Field 65 years earlier. In 1884 they were special guests at a meeting pushing for further political reform. The Oldham Chronicle newspaper interviewed several of the veterans for an article that gave a fascinating insight into their experiences.

“Remember it! He should think he did. He nearly got killed that day. When the Yeomanry rushed upon them he made his escape, and took refuge in a cellar where a lot of his fellow Reformers followed. In the bustle he was thrown down, and trampled on, and badly hurt. It was with great difficulty he got home. Forget that day! nay, never while life lasted.”

For further information on the events and exhibitions taking place to mark the 200th anniversary of the Peterloo Massacre visit www.Peterloo1819.co.uk The Peterloo 2019 project has been supported by The National Lottery Heritage Fund and developed through partnerships with cultural organisations and communities.