2018 marks the centenary of the RAF, the world’s oldest air force. Here, the RAF Museum, London pick 10 objects from their extensive collection which highlight the amazing technological advances, innovative thinking and touching personal stories that surface through the depths of war

Taking to the air during 1913, the Avro 504 served with front line squadrons until 1915 when it was reassigned to the training role for which it is best remembered.  Retired from the RAF in 1933 a handful of Avro 504s were impressed back into service at the outbreak of hostilities in 1939 making it the only basic design to have served in both World Wars.

This rudder came from an Avro 504J C4451, the aircraft in which H.R.H. Prince Albert (later to become King George VI) learned to fly. 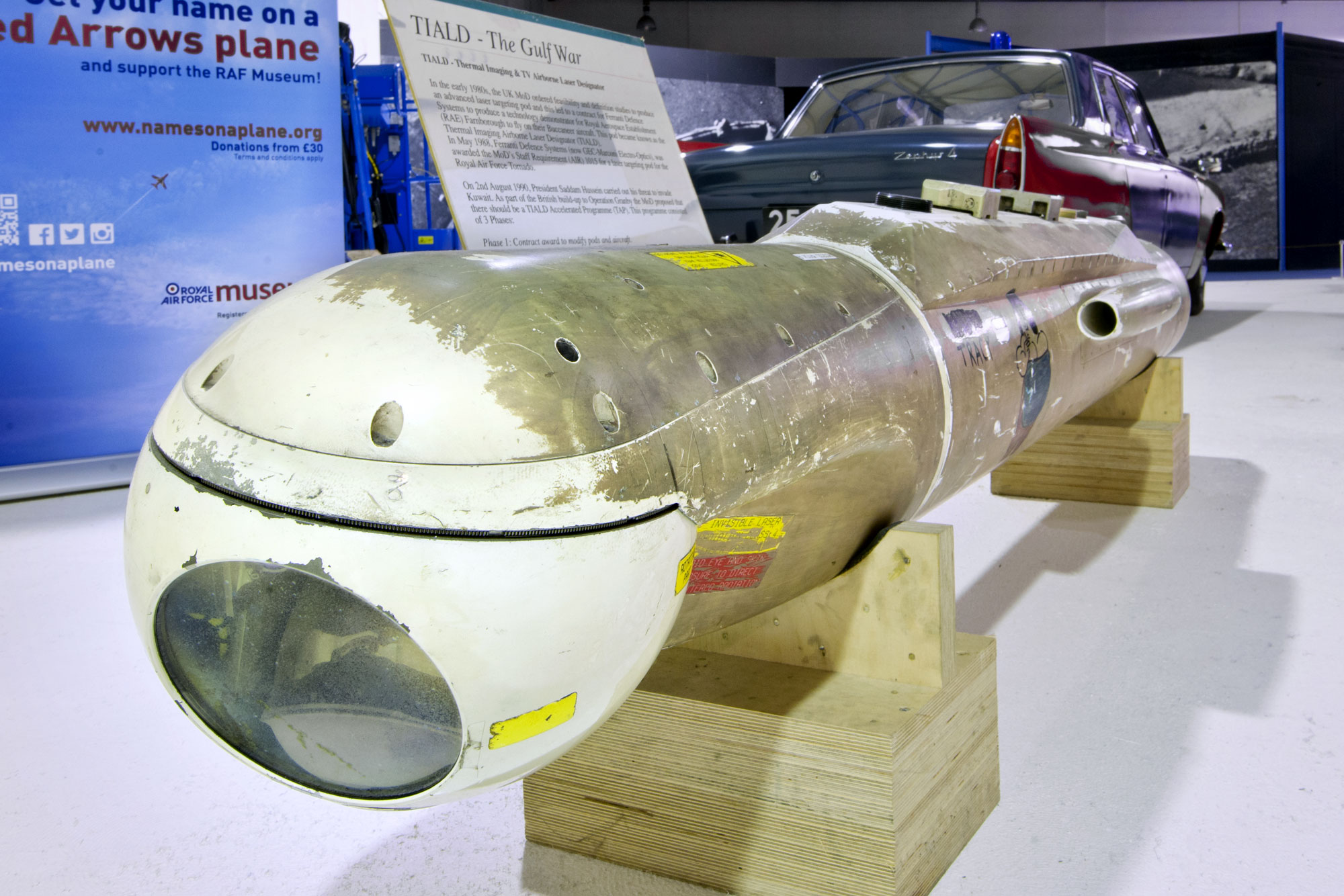 The TIALD (Thermal Imaging Airborne Laser Designator) Pod provided the Royal Air Force with a day and night precision strike capability with the production version seeing action over the Balkans and Iraq during the 1990s.

The TIALD Pod was still in development when, in 1990, Iraq invaded Kuwait.  With the conflict to eject the Iraqi forces looming, RAF personnel and engineers from the Ferranti worked day and night, seven days a week to prepare two pods and four Tornados.  The pods, named “Sharon” and “Tracy” after characters from the adult comic “Viz”, flew their first sorties on 10 February and over the next 18 days, completed over 100 sorties with 229 confirmed hits on target.

Highlighting the work of those who keep the RAF flying, we have the ubiquitous “Trolley Acc” which would have been found littering many 1940s airfields.  Basically a wooden box on wheels, the trolley houses a series of batteries which would have been used by the ground crew to provide electrical power to an aircraft for starting the engine or for checking the electrical systems.

This example, recently restored by the volunteers of the RAF Museum’s Vehicle Team, is fitted with a single cylinder JAP engine which was used to recharge the batteries on remote sites where mains electricity was unavailable. 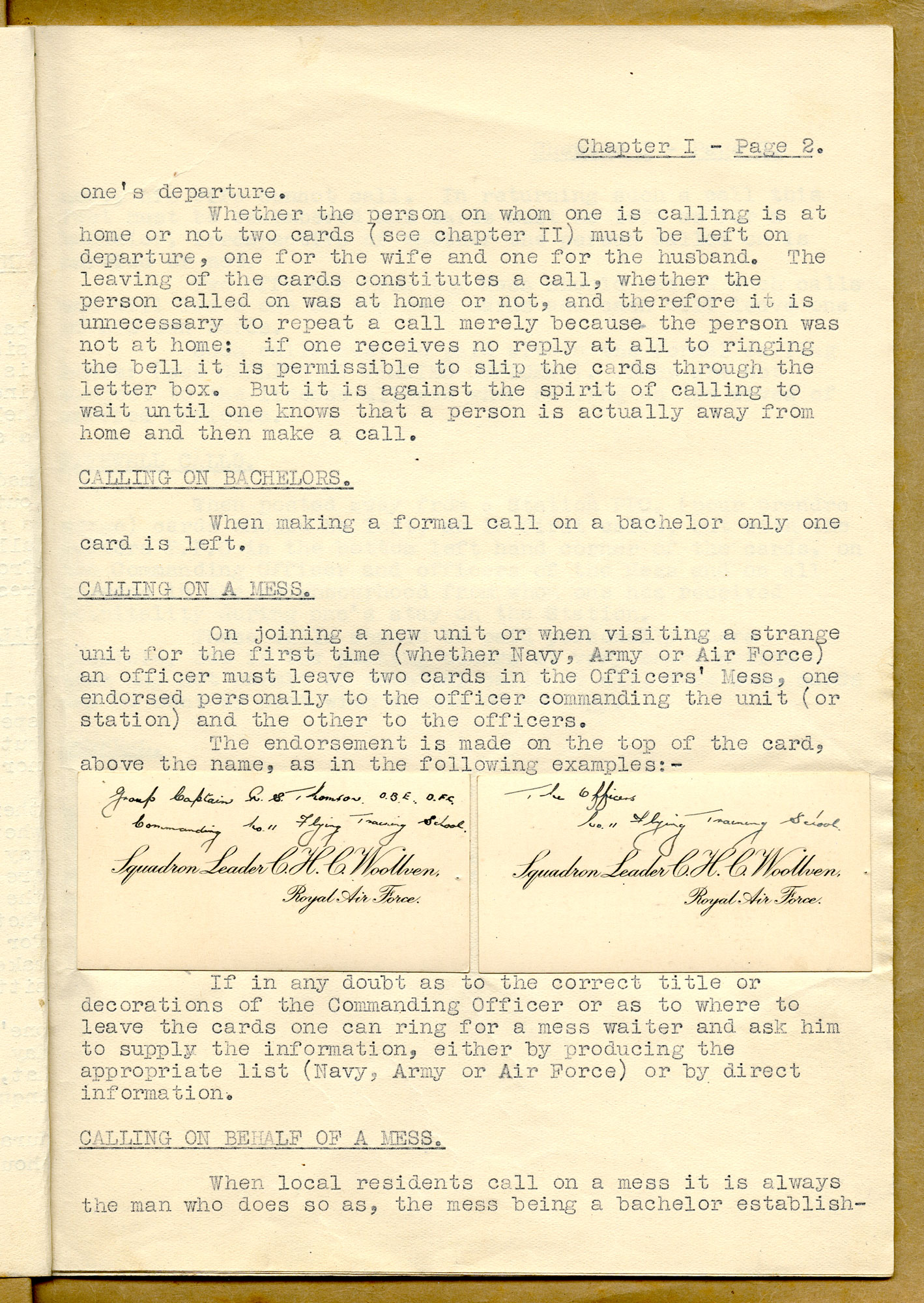 This document illustrates the rigid etiquette that governed the social lives of RAF officers in the inter-war years. It includes the following handy advice:

General discussions on politics, on religion, or in which ladies’ names are mentioned are not allowed within the mess. Swords must never be drawn…Cash transactions and the making…of bets should never take place…The origin of these unwritten laws dates back to the time when duels were frequently fought as the result of quarrels on such subjects: as a guiding rule, nothing should be discussed in a mess on which feeling is likely to run so high that quarrels may possibly occur’.

‘The Great Escape’, ‘The Dam Busters’, ‘Reach for the Sky’ by Paul Brickhill 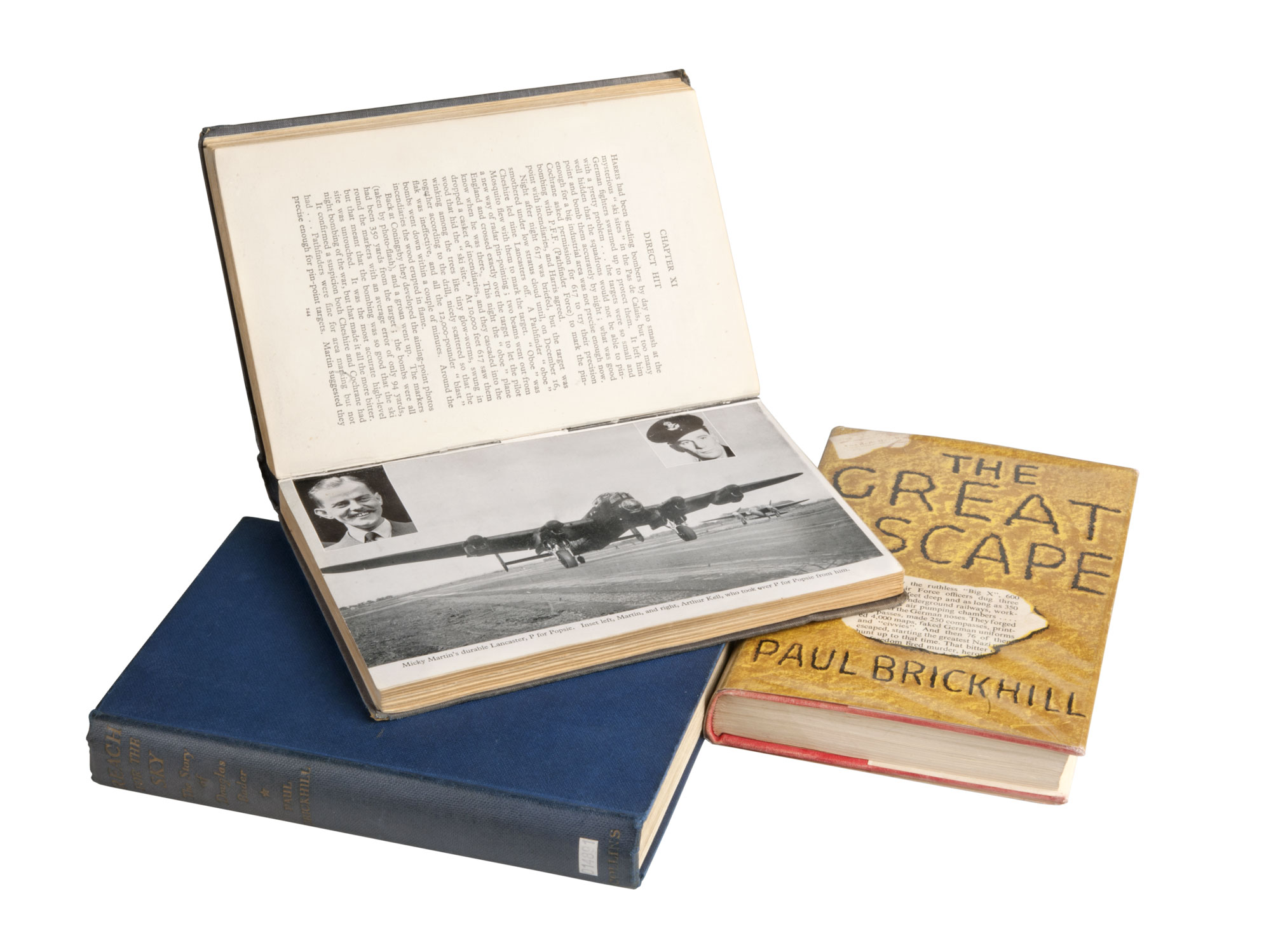 Flight Lieutenant Paul Brickhill was an Australian Spitfire pilot shot down and held as a prisoner of war at Stalag Luft III. After the war, Brickhill wrote three best-selling books: ‘The Great Escape’, detailing the mass breakout from Stalag Luft III (1950); ‘The Dam Busters’, his gripping account of 617 Squadron’s low-level, pinpoint attacks on the Ruhr hydro-electric dams (1951); and ‘Reach for the Sky’, the biography of double amputee fighter ace Group Captain Sir Douglas Bader (1954). These seminal books, and the highly successful feature films they inspired, have shaped, and perhaps distorted, our understanding of the RAF’s contribution to victory in The Second World War. 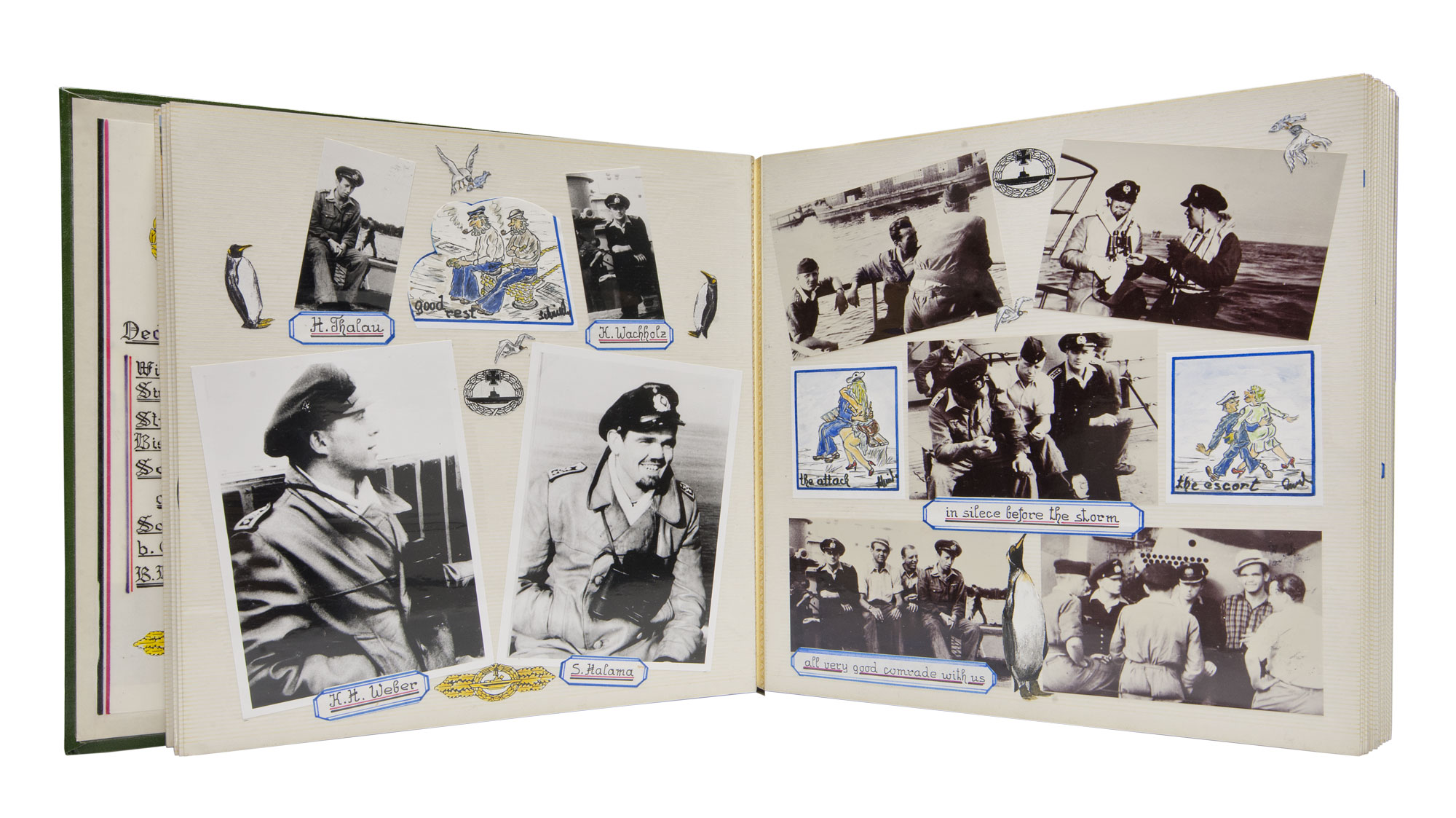 On 7 May 1945, Flight Lieutenant Ken Murray and his crew were on patrol over the North Sea in a 210 Squadron Catalina when they sighted German submarine U-320. The RAF flying boat attacked and sank the U-Boat with depth charges only for Murray to receive the signal that the war in Europe had ended.

Flight Lieutenant Murray regretted the unnecessary loss of life but, in 1985, he received a letter from U-320’s commander, Heinz Emmerich, informing him that the submarine and its crew had in fact survived. Murray was invited to U-320’s annual reunion the following year where he was presented with this album by his former adversaries. 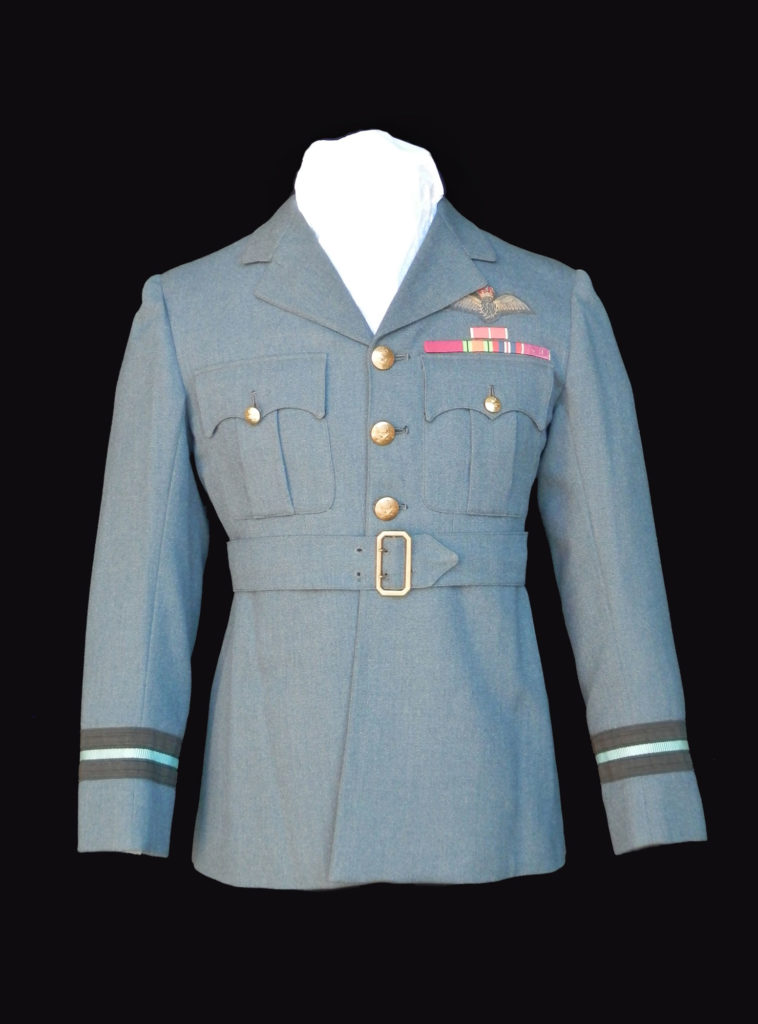 This Service Dress tunic belonged to engineering hero Air Commodore Sir Frank Whittle, who is world famous as the pioneer designer and developer of the world’s first jet engine.

Whittle’s engineering interest and aptitude was harnessed in a successful Royal Air Force career, notably during completion of the officers’ RAF engineering course which saw him develop his ideas about turbojets. After graduating in engineering at Cambridge, he formed his own company, ‘Power Jets’. Despite a lack of official support, Whittle managed to create the first engines that dispensed with the profusion of moving parts found in a conventional piston engine, replacing them with an engine that consisted of one moving part: a spinning turbine and a centrifugal compressor with a far higher output. These engines began the British jet age and a wider revolution in the world of aviation.

The uniform tunic chosen for display is the uncommonly seen 1947 pattern, which had only a short life as the approved pattern. The disappearance of the large and useful pockets on the lower skirts of the tunic proved deeply unpopular with officers who wore them. Pockets were reinstated on subsequent versions. 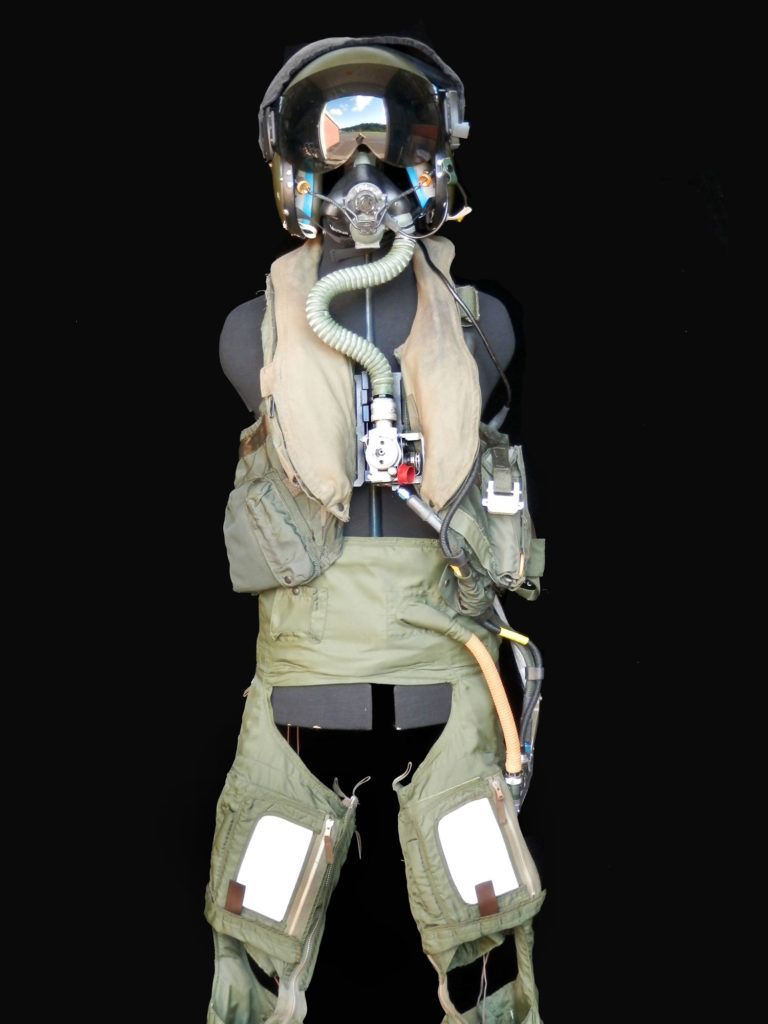 In more than a century of human flight, the clothing that has to be worn in the air has continually evolved. As the human body is not adapted for flight, the only way of keeping aircrew alive during flight is to match the technology of protective clothing to the increasingly demanding environment created by ever higher performance aircraft.

Increases in flying possibilities mean a lack of oxygen, sub-zero temperatures and considerable G-Forces exerted on the body. The typical flight clothing of an RAF Phantom pilot from the 1980s addresses all of these factors well. The Mk20 life jacket (1994/0232/S) not only has the potential to save life in the sea, but houses the Personal Equipment Connector with its vital oxygen regulator and communications link to an ejector seat. An aircrew protective helmet Mk 4B (1996/0426/U), has a hard shell to shield the head from any impact with the cockpit canopy; ear capsules that house headphones for communication and hooks that hang the oxygen mask Type V9 (1994/0230/U) and its pipe that carry oxygen for breathing at high altitude and a centrally positioned microphone.  The anti-gravity G-trousers provide a solution for the body to resist either a black out of pilot’s vision or worse, G-induced loss of consciousness.  During extremely rapid turning, climbing or descending manoeuvres, compressed air is injected into the belly band and leg panels covering primary muscles. Blood is forced to remain in a pilot’s torso and head, meaning they will still function, rather than descending into legs and feet which would mean certain death. 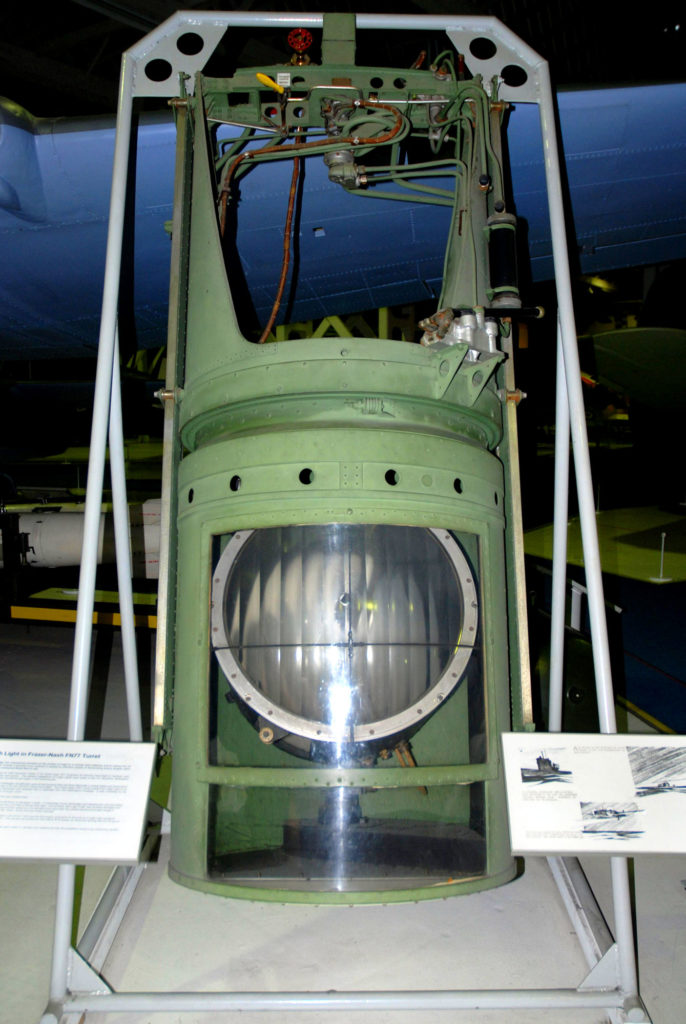 The Leigh Light was introduced in 1942 for use by Coastal Command aircraft when attacking surfaced German U-boats at night.

The attacking aircraft would use radar to identify the presence of a U-boat on the surface and the pilot would be guided to within a few hundred yards of the target before the Leigh Light was switched on.  If the guidance was successful, the target would be illuminated by the Leigh Light’s beam and the aircraft would attack with depth charges, preferably before the U-boat’s crew had time to react.

The Leigh Light gave the Allies an advantage at a critical time in the Battle of the Atlantic.  German U-boats, crossing the Bay of Biscay to their patrol areas under the cover of darkness, could now be successfully found and sunk by Coastal Command aircraft. 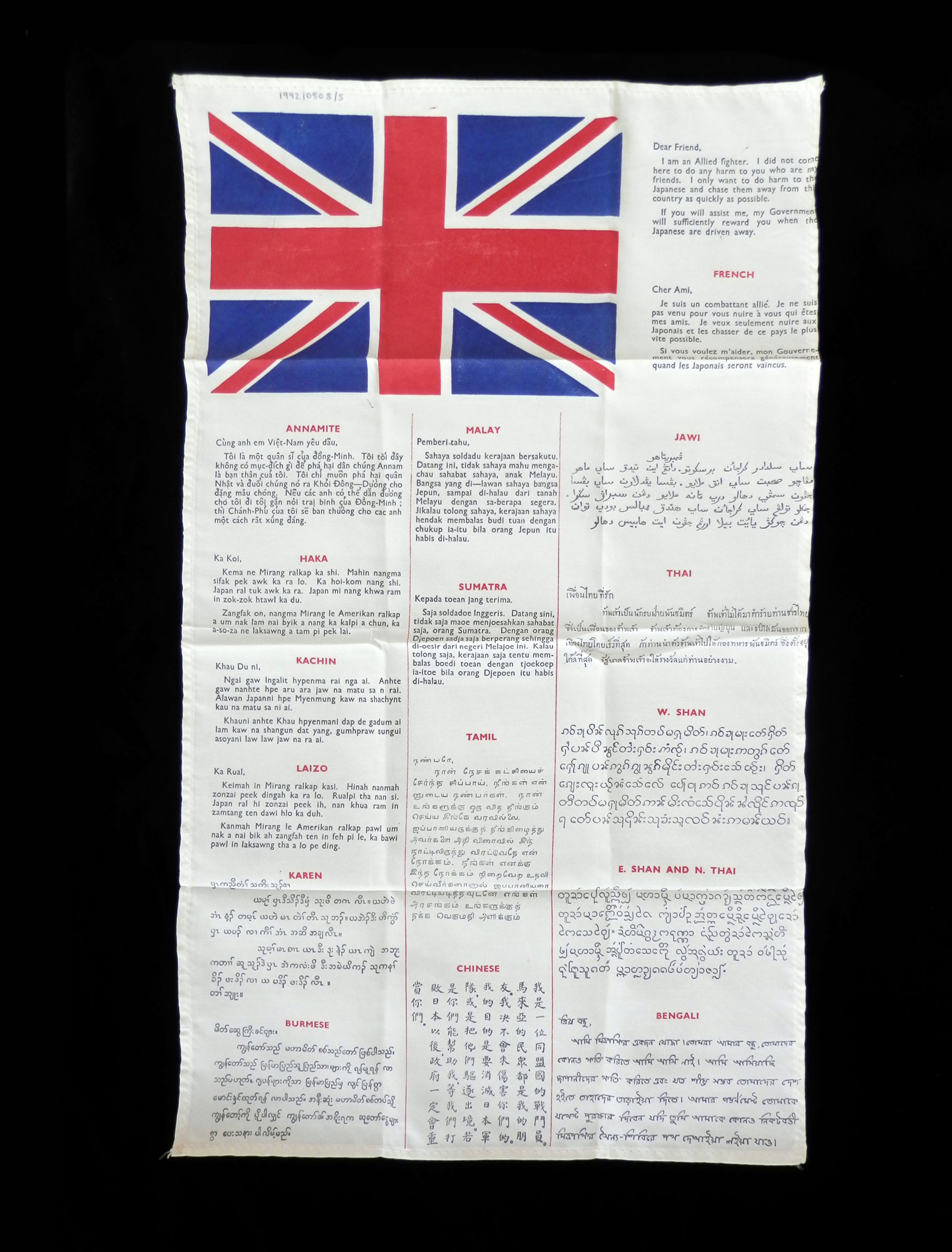 The “Goolie Chit” or “Blood Chit” was pioneered by pilots of the Royal Flying Corps while based in India during the First World War.

If forced down in potentially hostile territory, the document, printed in the languages of the region, promised to reward those who gave the airmen assistance.  The term “Goolie Chit” was a reference to the desire by the authorities for the airman to be returned alive and in one piece.

This particular example was carried by RAF pilots flying in Asia during the Second World War.  The message is printed on silk in seventeen different languages and includes the words: “Dear friend. I am an Allied fighter, I did not come here to do any harm to you who are my friends…If you will assist me, my Government will sufficiently reward you when the Japanese are driven away”

These messages not only provided reassurance to their bearers, they could also, in extreme circumstances, mean the difference between life and death. Similar documents are carried on some operations by RAF and other service personnel to this day.

Get ready for take-off and wing your way over to a wonderful collection of aircraft, interactives, medals, uniforms, film shows and memorabilia on display and trace the story of the RAF and aviation itself. The Royal Air Force Museum’s purpose is to tell the story of the RAF through is…

The Royal Air Force Museum Cosford is home to over 75 historic aircraft and offers a fun, entertaining day out for the entire family. Aircraft on display include the world’s oldest Spitfire, the unique TSR2 and the mighty Vulcan bomber to name but a few. Plus, visitors can now see…