Detail from scenes from the legend of St James

The Stained Glass Museum, the only one of its kind in the United Kingdom, celebrates the vibrant beauty of stained glass from the medieval period to the present day. Over 125 examples are displayed at eye level in the beautiful surroundings of Ely Cathedral. The collection includes glass from across Britain and Europe from a range of important religious and secular buildings as well as private homes and studios.

Opening its doors on March 30 1979, the museum began its 40th anniversary celebrations in November 2018 with a visit from its Patron, HRH The Prince of Wales. Celebrations are continuing throughout the year with a regular programme of ‘Spotlight’ and ‘Behind-the-Scenes’ tours and a series of online posts #SGM40. 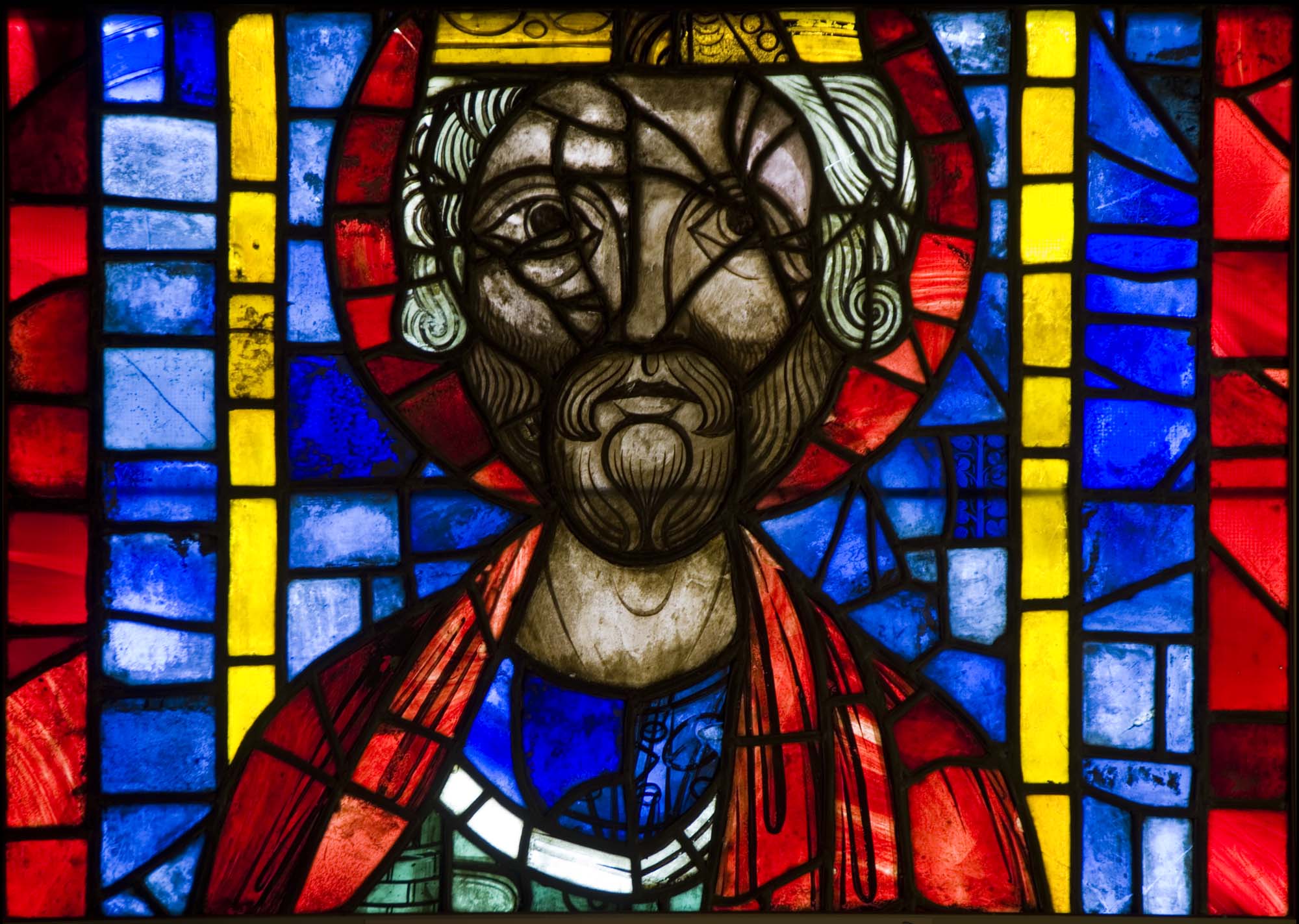 Bust of a king.

This striking image of a medieval King is the oldest stained glass panel in the museum’s collection. The simple design and bright primary colours are typical of early medieval stained glass. The panel comes from the side windows in the clerestory of the choir of Soissons Cathedral, which originally also contained enthroned figures of prophets and apostles in two tiers.

The Cathedral was brought into use by 1212, the choir at Soissons was a key building in the evolution of the High Gothic architectural style and one of the very first Cathedrals to include the giant figural stained-glass windows so characteristic of these great churches. Many of the windows were removed in the 19th century and then found their way into museum collections.

Annunciation to the Virgin

Rescued from a redundant parish church this window is now one of the museum’s star objects. The window, which depicts Gabriel’s Annunciation to the Virgin Mary, is one of the finest surviving examples of English 14th-century glass-painting, which illustrates the elegance and sophistication of the ‘Decorated’ style. Mary’s twisting pose is typical of the fascination with sinuously curving shapes seen in the architecture of this period.

It was also the first medieval stained glass to be acquired by the museum in 1976. Although the museum did not officially open its doors until 1979, its origins date to 1972 when a project was established to rescue ‘homeless’ windows such as this one, from redundant churches and other buildings. In 1866 the window was sensitively and skilfully restored by the Birmingham firm of John Hardman Co. 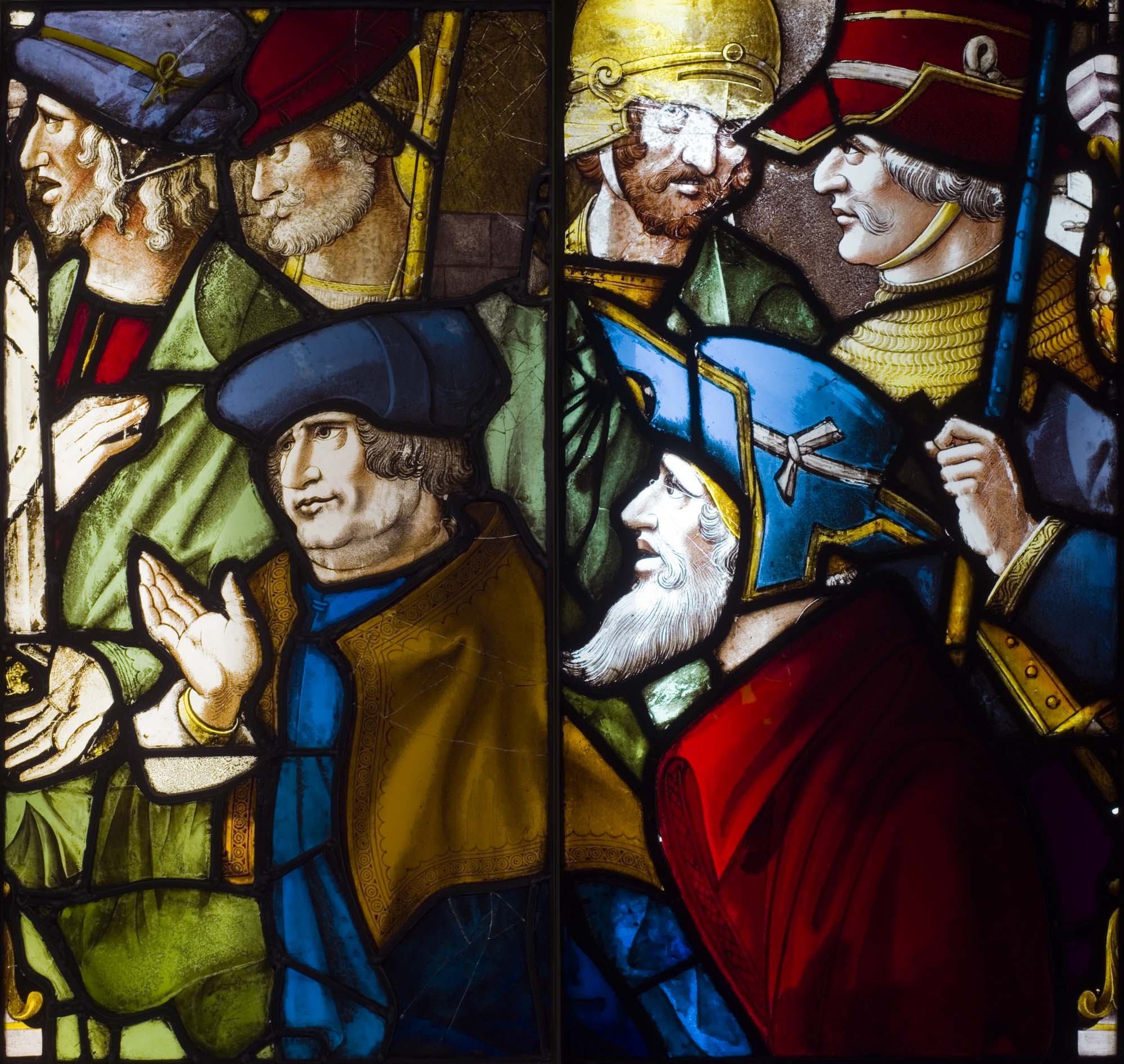 Scenes from the legend of St James.

Richly coloured and exquisitely painted, this panel shows the highly developed techniques of continental glass painters and glaziers by the 1500s. In England, such developments were halted by the Reformation. The panel, which possibly depicts observers at the trial of a Pilgrim, from the Legend of Compostella, is artistically linked to the circle of Netherlandish glass-painter Arnold of Nijmegen (active c. 1490-c. 1536). Although made in the 16th century, the panel was a key acquisition for the museum in the 20th century.

Portrait of George III, 1793, made by James and Margaret Eglington Pearson, Windsor Castle 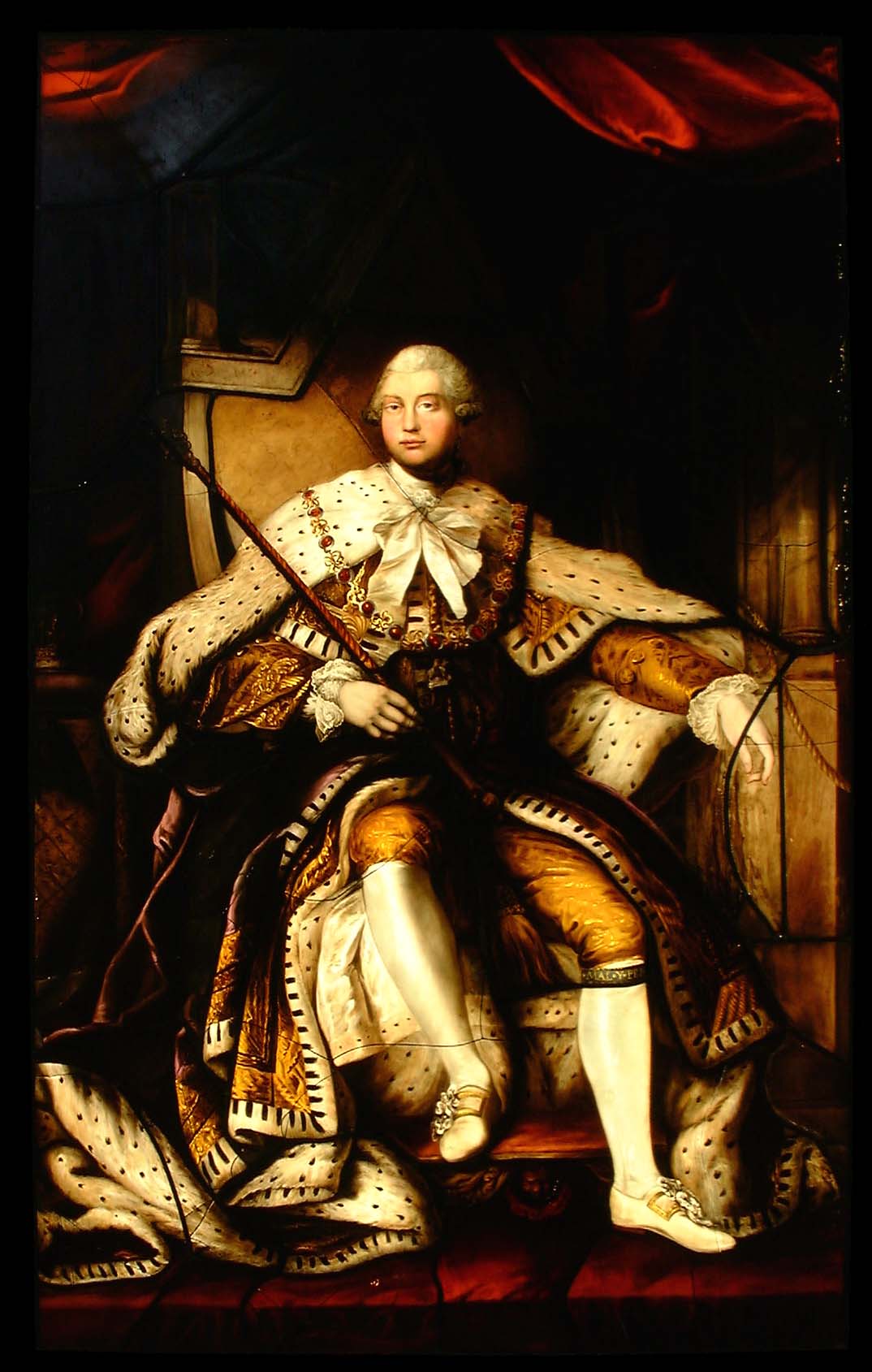 This larger-than-life portrait of King George III (r. 1760-1820) on his coronation throne is a stunning example of enamel painted glass. The panel is skilfully painted onto clear glass using coloured enamels by husband & wife duo, James and Margaret Pearson, and is copied after an oil painting by Joshua Reynolds, which can be found at the National Portrait Gallery, London.

Where possible the lead lines have also been concealed. The panel was originally displayed above an ornate marble fireplace in the King Charles II Dining room at Windsor Castle. It is on loan to The Stained Glass Museum courtesy of Her Majesty the Queen, and the Royal Collection.

Labours of the Month: August, Threshing the Corn, 1863, Designed by Dante Gabriel Rossetti, made by Morris, Marshal, Faulkner & Co. 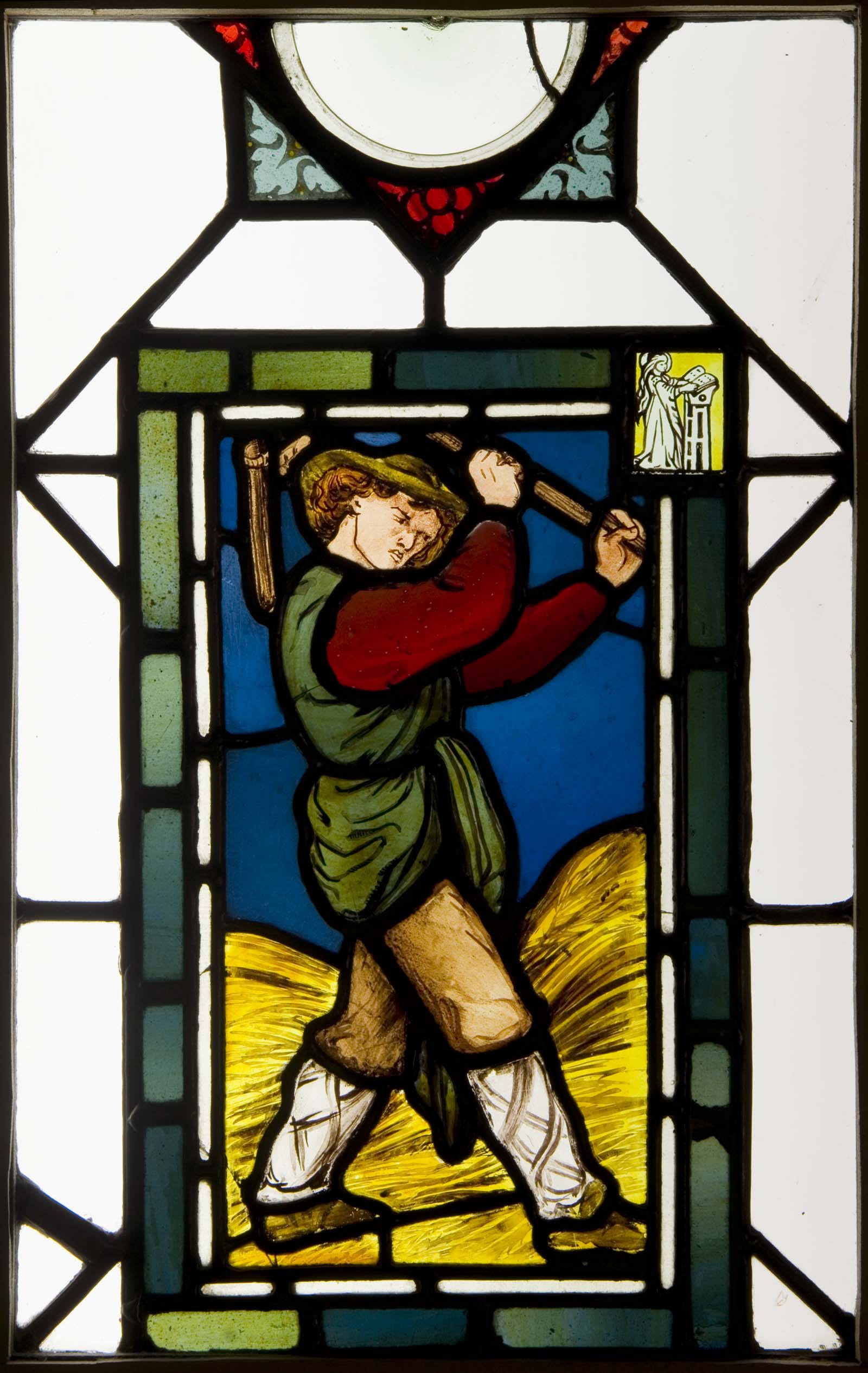 Labours of the month

The collection of 19th and 20th century glass at the Stained Glass Museum is unparalleled. This small panel was designed by the celebrated Pre-Raphaelite artist, Dante Gabriel Rossetti (1828-82) for Morris & Co., shortly after the firm had founded. It demonstrates a subtle shift from the Gothic revival style of the time towards what would become known as the Arts and Crafts style.

This panel was once part of a set of 12 ‘Labours of the Month’ and came from the drawing room of Silsden House in Keighley, Yorkshire. The house was built for a wealthy Bradford textile manufacturer to the design of architect Richard Norman Shaw. The glass was removed when the house was demolished in 1903. 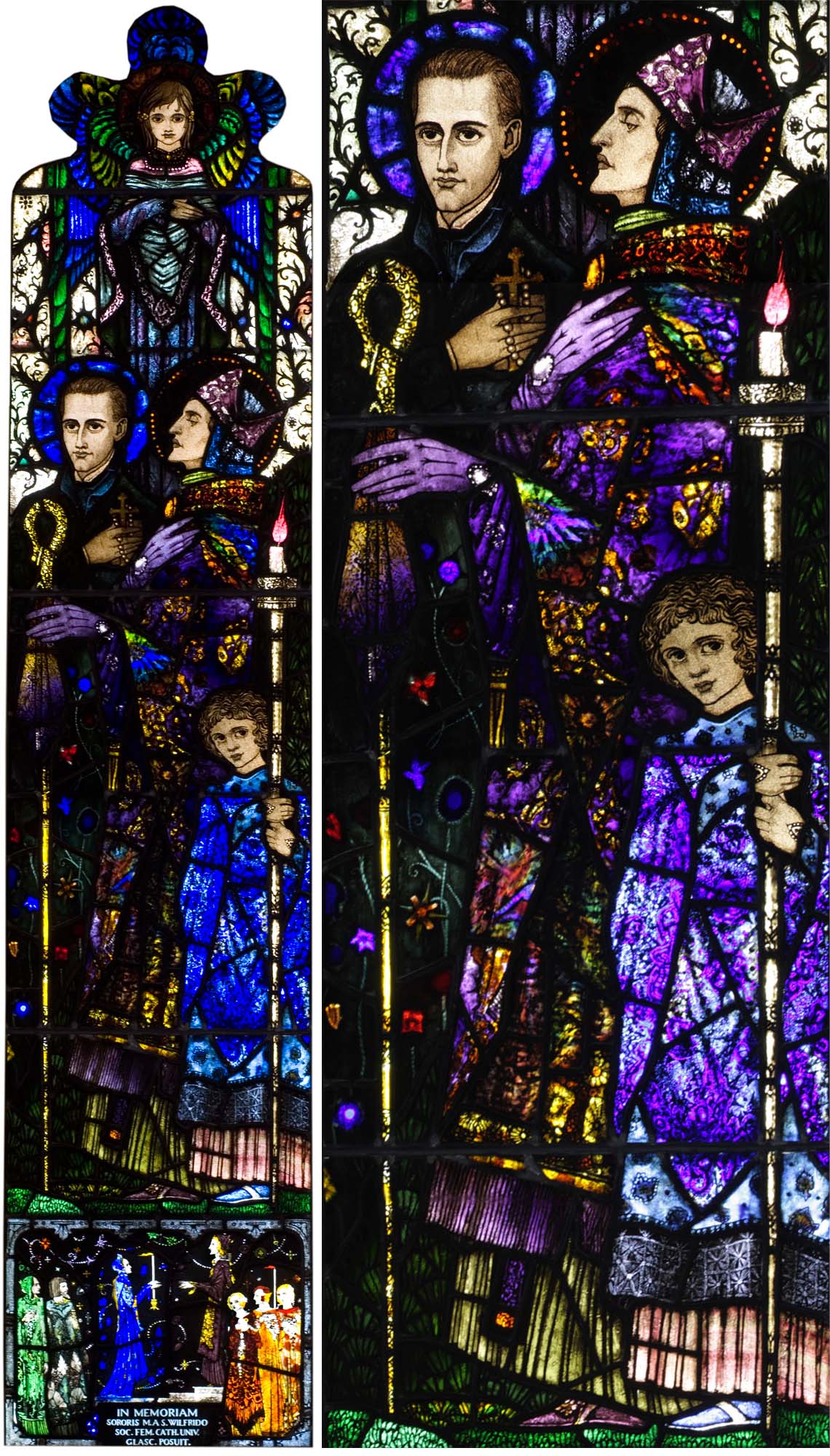 Visitors come from all over the world to see our Harry Clarke window, which was rescued from a former convent in Glasgow. Clarke was a well-known artist and illustrator, as well as a key figure in the Irish Arts & Crafts Movement. The people represented in this window were carefully chosen to reflect the individuals to whom it was dedicated. The museum was able to purchase this panel at auction in 1998 with help from the Art Fund, the V&A Purchase Grant and a Friend of the Museum, P. Shaw. 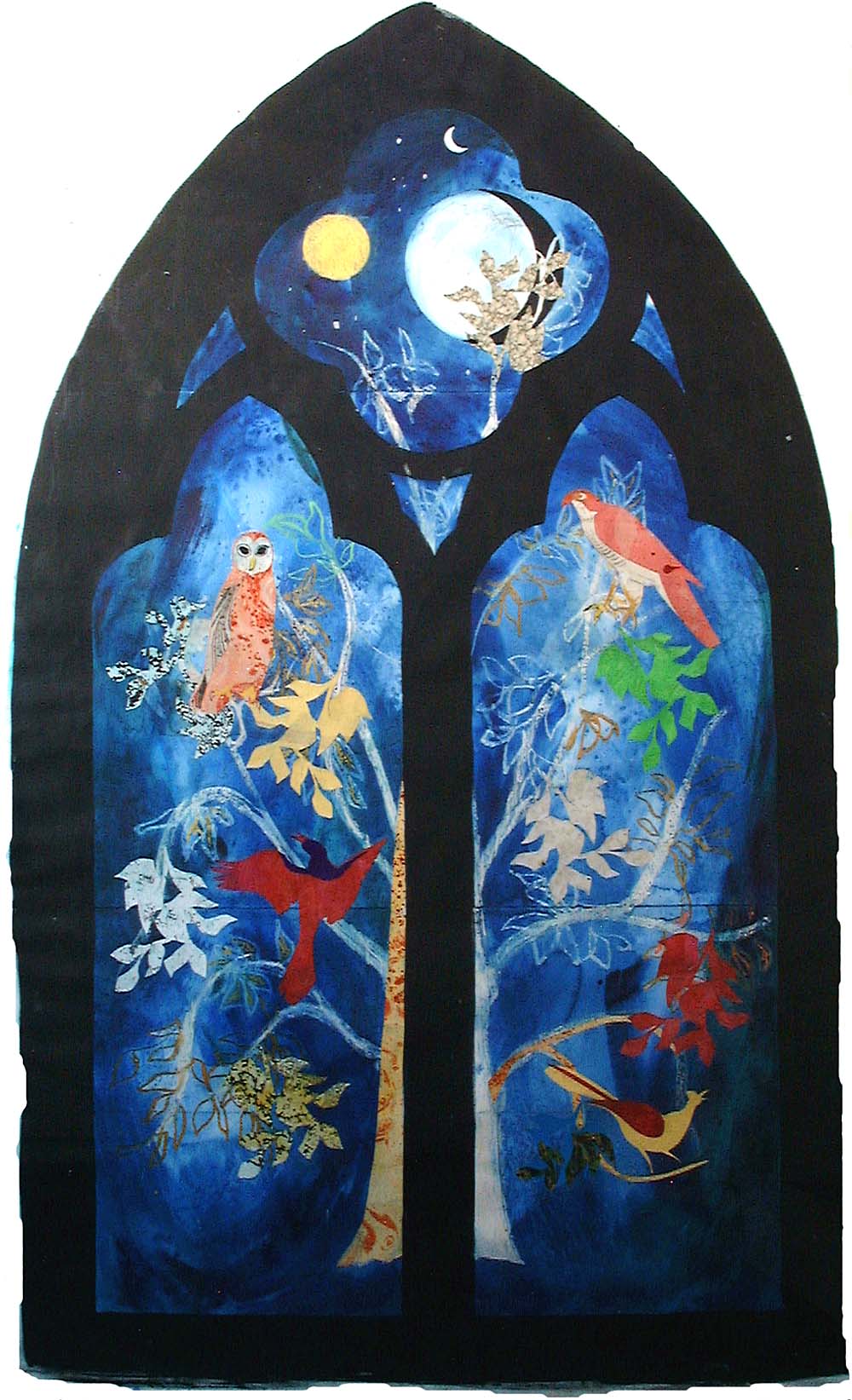 A cartoon is a full-scale working drawing of a stained glass window. This is the only cartoon on permanent display in the museum gallery from our extensive cartoon collection. British artist, John Piper designed many stained glass windows which were often translated into glass by skilled artist Patrick Reyntiens. This memorial window is dedicated to Peter Fleming (1907-71) who was a ‘writer, traveller and solider’ having served with the Grenadier Guards during World War II. He was also the elder brother of James Bond author, Ian Fleming.

Stained glass can be found in a variety of religious contexts, and this one comes to the museum from an Ashkenazi-Orthodox synagogue that was demolished in the 1960s. Its subject is the Jewish festival of Purim, which celebrates events described in the Old Testament in which Esther, a Jewish girl, prevents a plan to slaughter the Jews living in Persia. Her bravery is commemorated with great revelry and this panel depicts the lavish array of food & drink accompanied by Hebrew inscriptions.

David Hillman arrived in Glasgow from Russia with his family in 1908 when his father was appointed Rabbi. Following his art training in Glasgow and London, Hillman started creating glass in the 1930s, including a series of 16 windows celebrating festivals in 1954 for the synagogue. Many of the panels were relocated to Borehamwood Synagogue in 1964 when the Bayswater building was demolished. 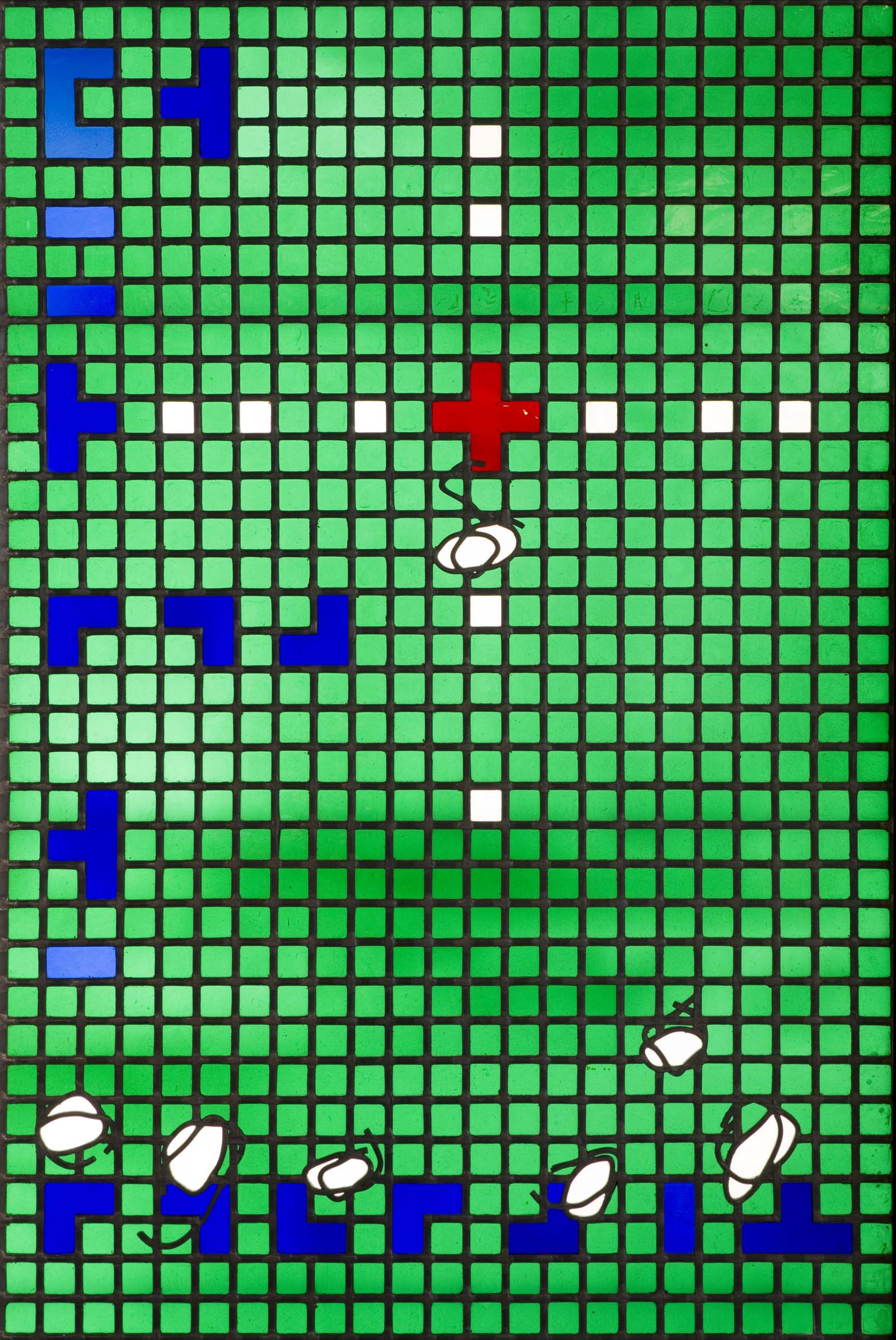 Brian Clarke, the son of an Oldham coal miner, is one of Britain’s leading exponents of architectural stained glass artists, and is well known for his collaborations with the architect, Sir Norman Foster, most notably at Stansted Airport and an enormous glazed arcade over the Victoria Quarters in Leeds. Clarke’s work is inspired by the work of German artists such as Johannes Schreiter, and he has worked consistently in an abstract, geometric style, and often on a vast scale.

His work has won international acclaim and commissions from Riyadh to Rio de Janeiro. This abstract panel in the entrance to the museum cannot be missed! It was made in 1982 and was influenced by German post-war abstract stained glass. 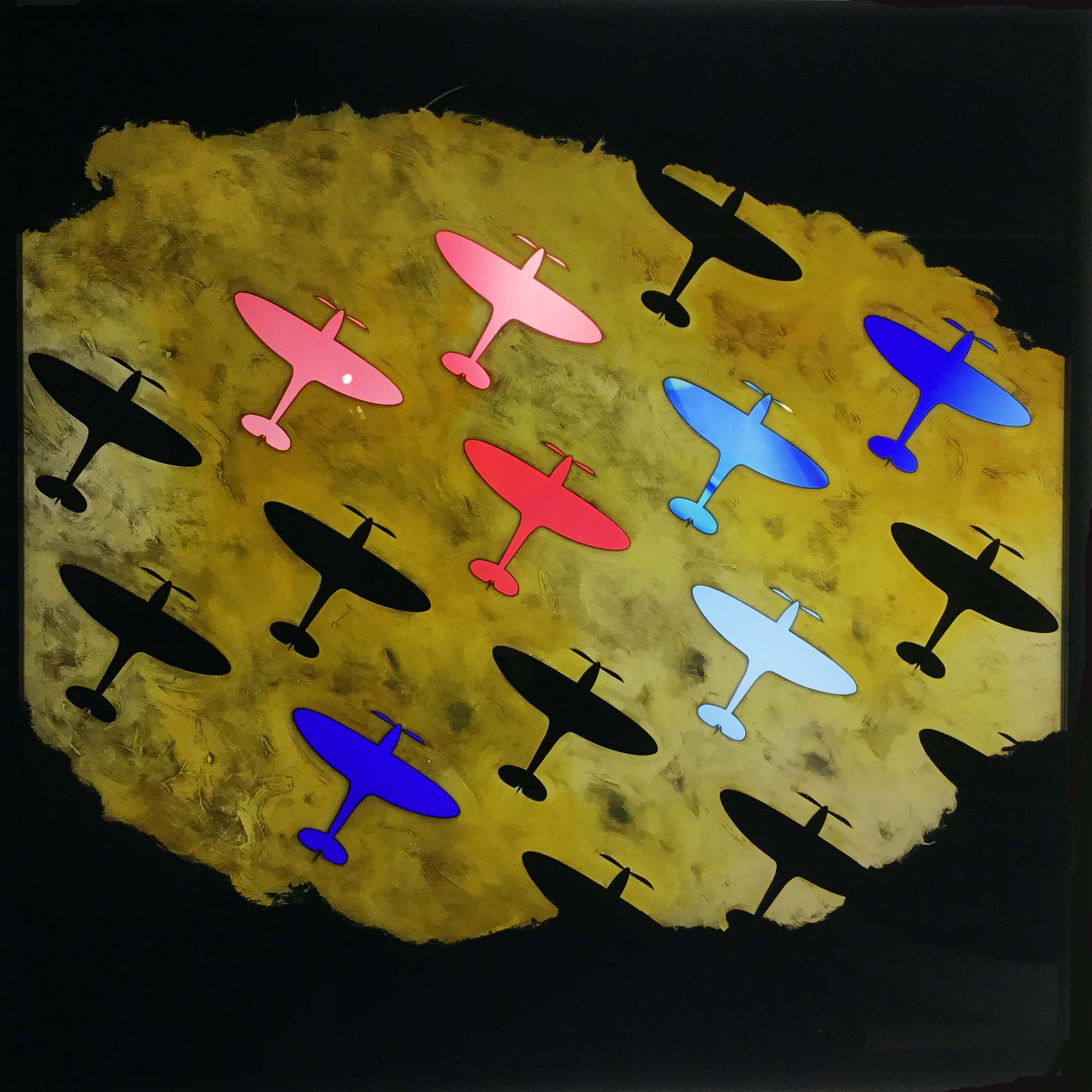 Clarke has been making paintings of iconic British Spitfires, since 2012. He made a site-specific stained glass window for an exhibition entitled Primroses and Spitfires at Pace Gallery, London in 2015. This is one of a series of 70 stained glass panels made on this subject, made in 2017. The artist gifted it to The Stained Glass Museum to celebrate its 40th anniversary of opening to the public. The panel features a digital print on glass of seven water-cut-jet antique glass Spitfire versos enclosed in a hand painted ceramic.

All images are © The Stained Glass Museum

The Stained Glass Museum is an independent, accredited museum & registered charity located in the South Triforium of Ely Cathedral and open seven days a week. You can find out more about the museum and its collection on our website here: www.stainedglassmuseum.com

The Stained Glass Museum’s main aim is to help people understand and enjoy stained glass. Our Gallery exhibition illustrates over eight hundred years of the history and beauty of this ancient craft. Founded in the early 1970s the Museum is located inside Ely Cathedral and is the only museum in…

3 comments on “10 treasures of the Stained Glass Museum, Ely”