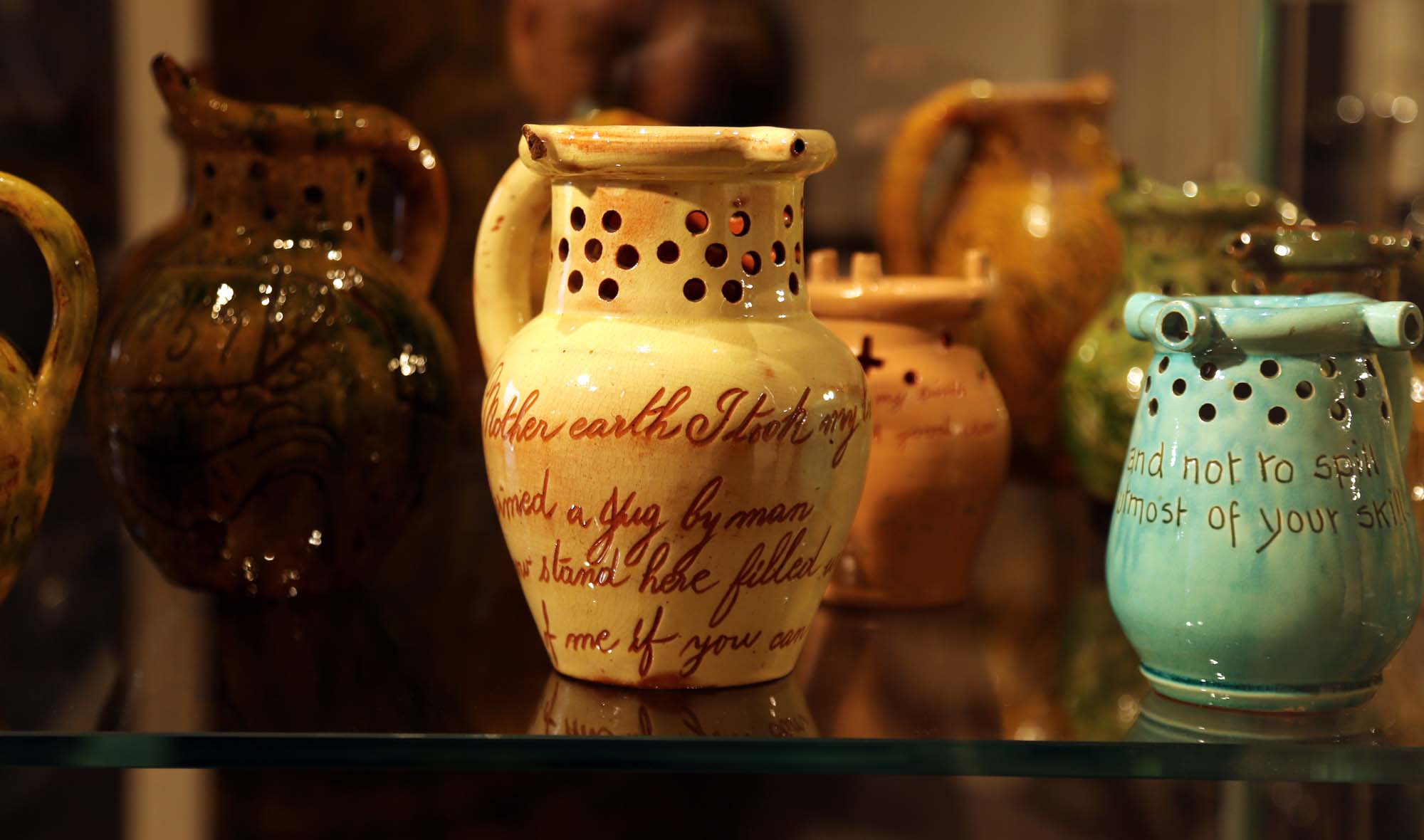 Decorative, functional and beautiful: ceramics from the last 400 years are on display in this celebration of Somerset slipware at Somerset Rural Life Museum in Glastonbury until November 9

The magic mixture of coloured clay and water, called ‘slip’, has for centuries been used to decorate pottery. Ancient potters used the technique to decorate their pots before firing – and of course the studio potters of the nineteenth and twentieth centuries revived it to produce layered decorative qualities that can be as beautiful as painted or glazed ceramics.

To some slipware ceramics may seem rustic, but their creation requires great skill and today the form is highly collectable and persists in the work of contemporary potters.

In North Devon and Somerset there is a great tradition of slipware dating back centuries and at the Somerset Museum of Rural Life they are celebrating its appeal by opening up a fine collection that charts its rise, fall and resurrection.

‘Somerset Slipware: The Art of the Potter’ explores how slipware ceramics developed in the county from the late 1600s onward with early production of slipware focusing on Donyatt in south Somerset and on pottery produced in the main for everyday use. 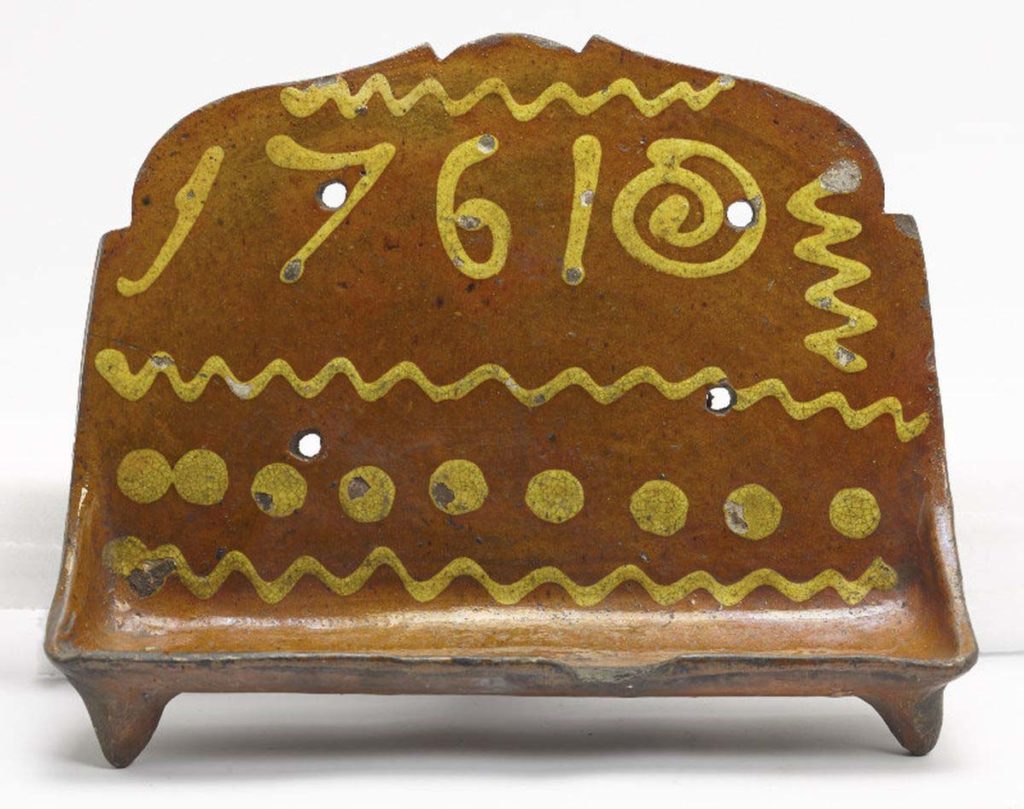 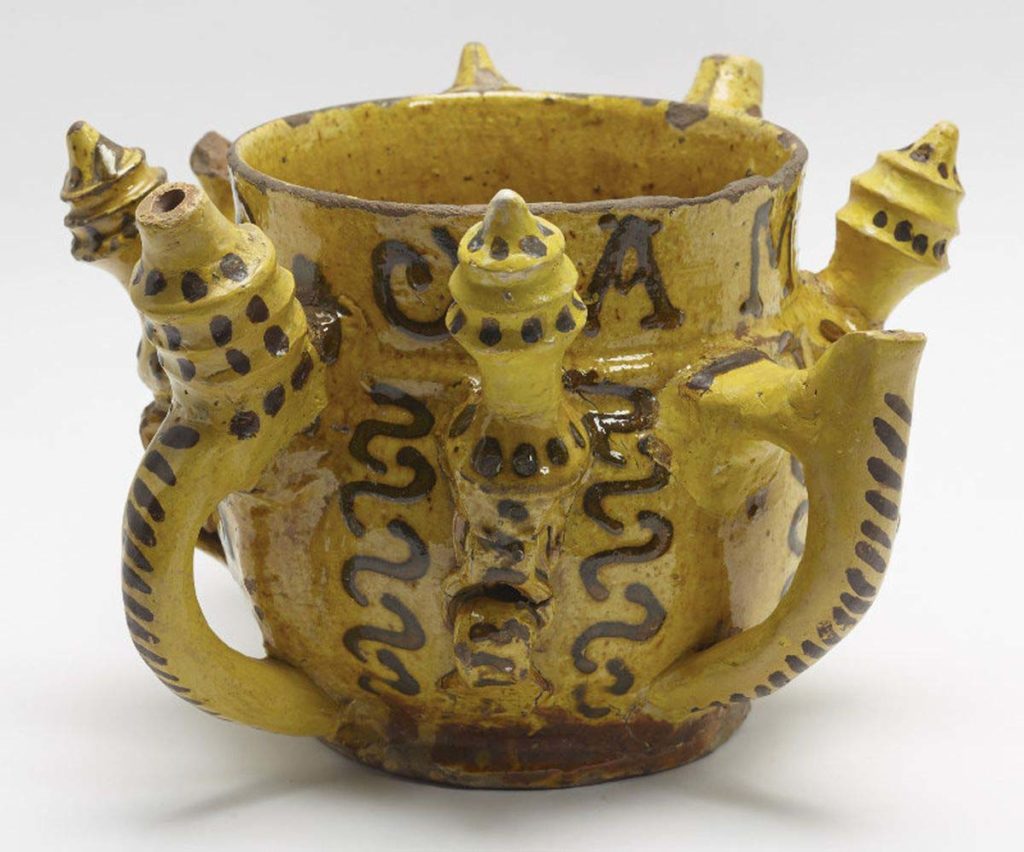 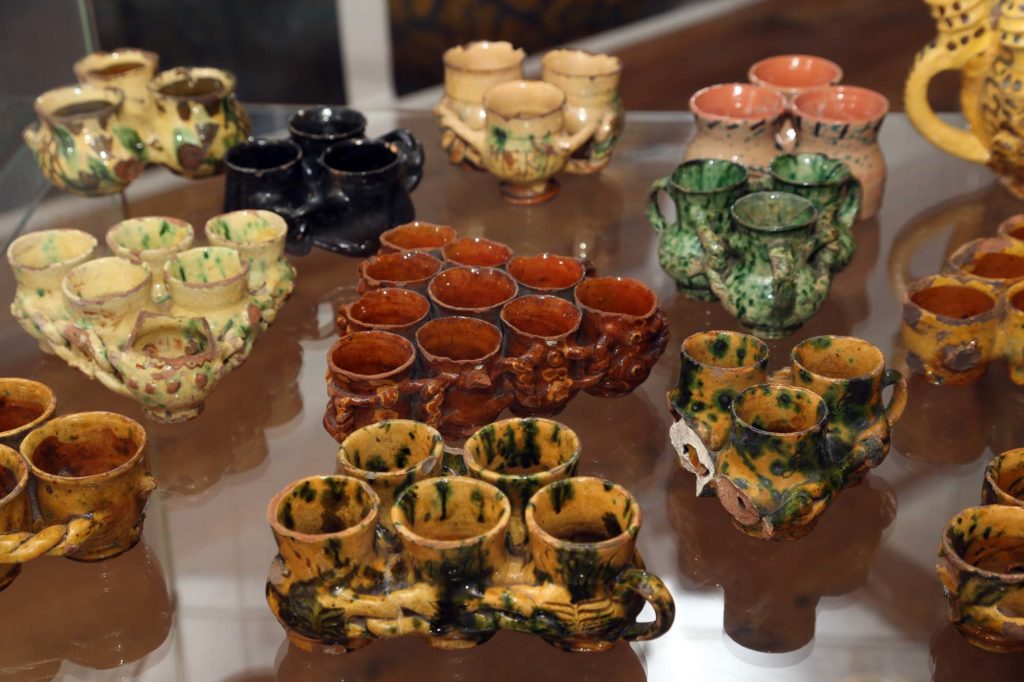 “There is evidence for slipware production in Donyatt from the 13th century,” says Curator Bethan Murray who oversees a collection dating back to the 1600s. “Traditional techniques were passed from generation to generation. Between 1662 and 1910 more than 70 potters are recorded.”

Among the more unusual ceramics produced by this thriving cottage industry and displayed here is a bacon toaster from 1761 and an 18th-century urinal, both of them exuding an aesthetic charm that belies their function. Many of the ceramics from Donyatt have a distinctive yellowish-brown colour, mottled with black or green. Some of them include imagery or inscriptions that place them in the social and religious milieu of their times. And this being cider country, drinking vessels feature quite heavily, too.

“They created quite a lot of everyday ware that was very functional but also objects that were slightly more fun,” adds Murray, “like the puzzle jugs that made cider drinking a bit of a puzzle by inviting the drinker to close off various holes and channels to get to the good stuff.

“Then there’s the Fuddling Cups, which look like several cups joined together – generally in a sort of triangular shape. They’re conjoined with an internal channel, if you’re really clever then you can drink all of the cups in one.”

More conventional modes of consumption are represented via beautiful harvest jugs which held either cider or beer to share at harvest, and posset pots which would have held posset, a brew popular in the early 1600s, which, says Murray, was “a drink made from spiced milk curdled with wine or ale, so not overly pleasant. But it is said to have been a cure all for minor illnesses.” 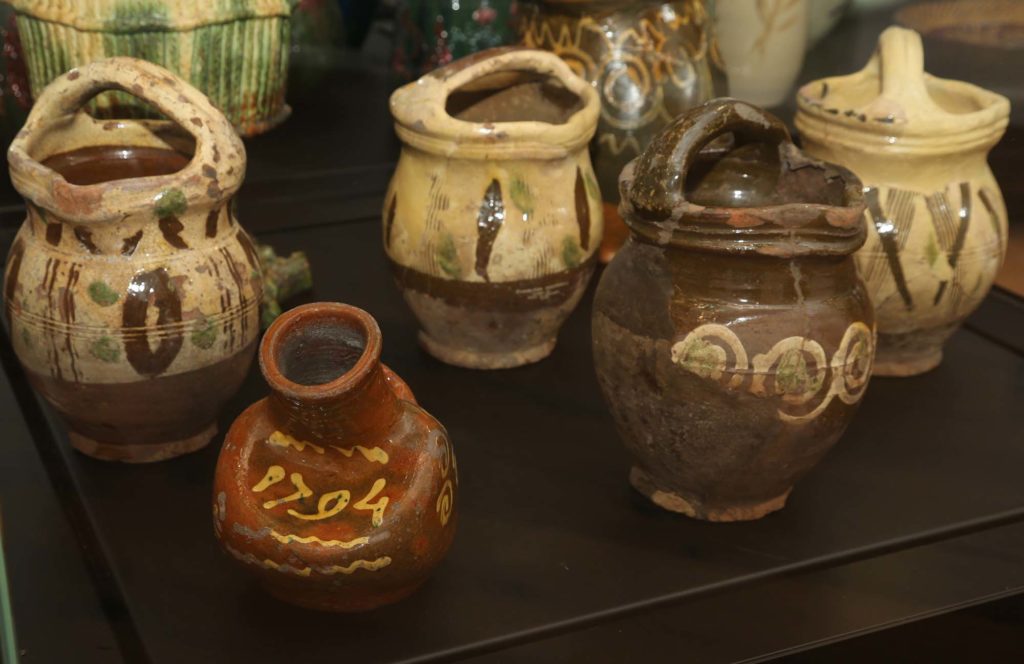 A urinal and bucket pots. 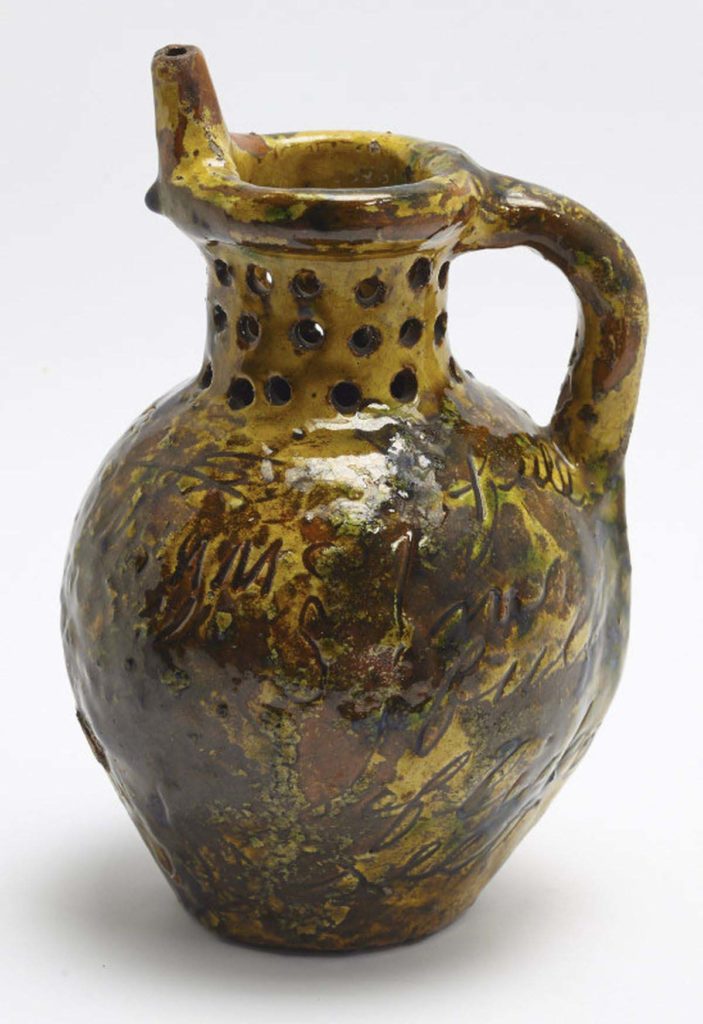 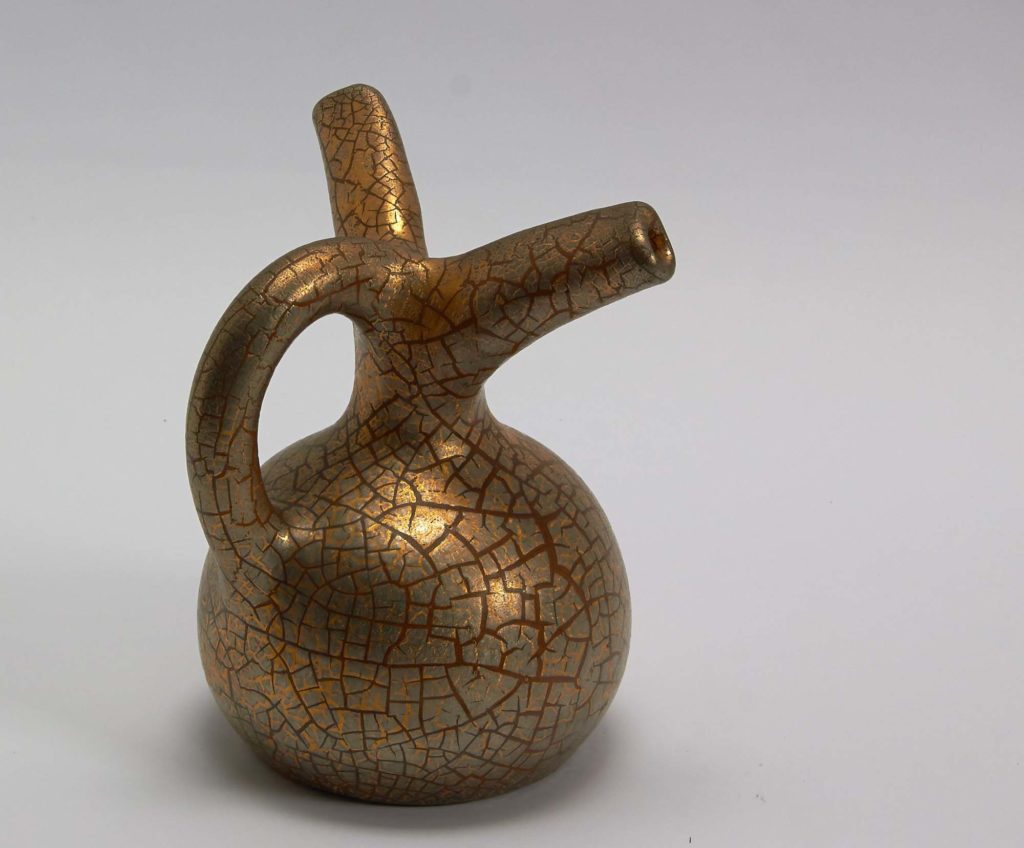 “In 1881 Edmond Elton of Cleveden Court decided that he wanted to start making ceramics,” explains Murray, “he had no background in it whatsoever so he began by trying to make ceramic pictures. This didn’t work so he employed a local flower pot painter to join him to make his pottery, and as you might imagine it’s very decorative.”

They are all very much influenced by Japanese patterns, full of flowers and nature and there are some quite unusual forms.
“Elton produced two types of pottery – the slipware, which features the flowers but then there’re the Crackle Ware which have a metallic sheen on them.

“He was painting gold and platinum into his slipware and one day they mingled to form this ‘crackle’ and so he developed that. They’re not necessarily the most beautiful things but they have their own sort of attractiveness.”

Another important part of this Somerset story of pottery is Fishley Holland, a potter from a well-known North Devon potting family, who moved to Cleveden to work with Elton. He eventually set up on his own and although his techniques were traditional, his cheerful use of colour found him an appreciative audience. 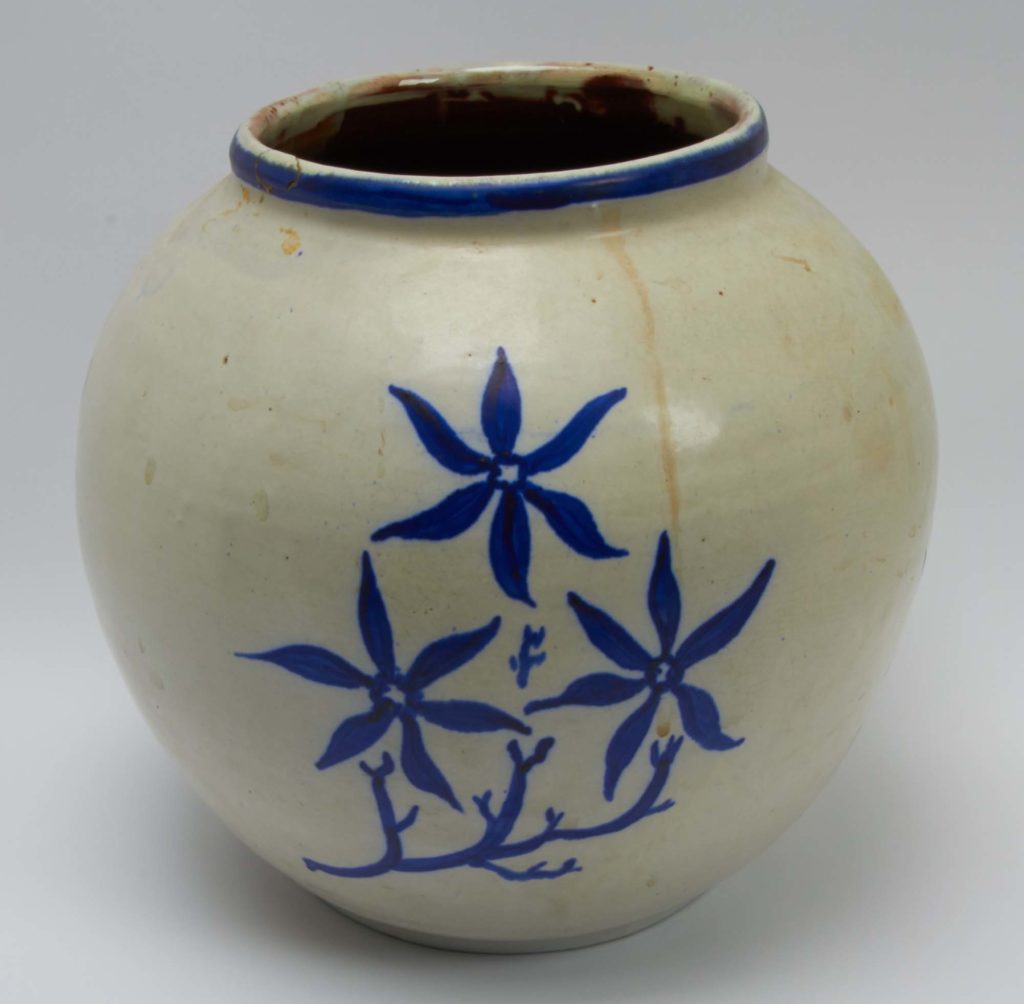 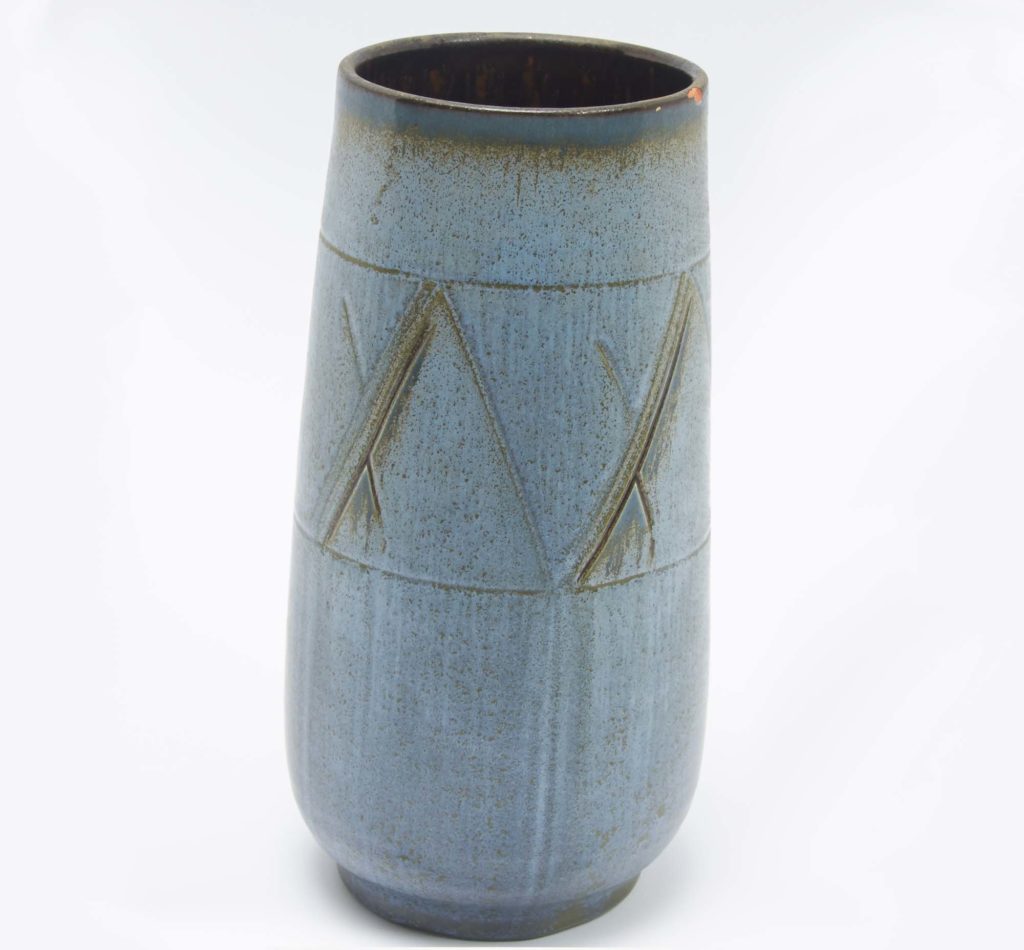 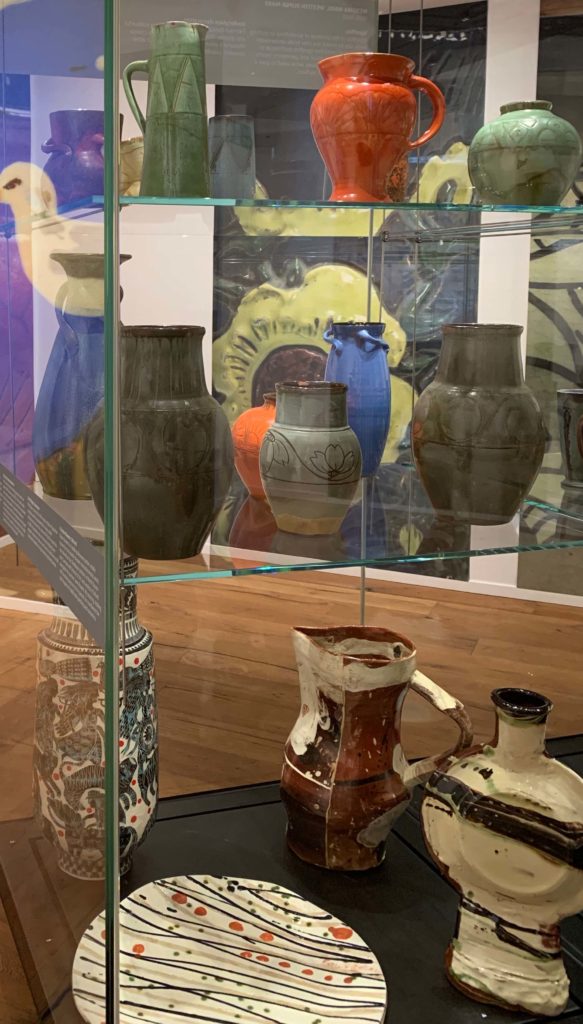 Another popular form of slipware, Wesuma Ware, was produced at a family-run Weston-super-Mare factory during the early 1900s. Taking its name from the first two letters of each word in Weston-Super-Mare, Wesuma was created by Thomas Lemon and his son Cyril.

“Thomas became a potter when his father died at sea and in 1926 he moved with his family up to Weston. Their pottery looks quite modern but they have quite geometric styles and rising sun or floral designs scratched into the slip. They’re renowned for their oranges but they also used pale greens and blues.”

Unfortunately Thomas Lemon died in 1941 and in 1942 the factory was destroyed in a German air raid, which was the end of Wesuma Ware, but the ware has since garnered its own following at auctions and online auction sites.

And that link with the mores of the modern ceramics buyer is represented here by contemporary potters who are keeping the slipware tradition alive through a series of ceramics that effortlessly combine function and form.

A large plate by Sandy Brown, based in Appledore in Devon, is accompanied by a large ceramic vase by Bideford Devon potter Victoria Lindow. There’s also a rather fine large jug made by Phil Elgin who’s based in Swansea and another beautiful vase from Dylan Bowen of Oxford.

Exhibition partner Somerset Art Works is also bringing artist in residence Emilie Taylor to the Museum to produce an installation that responds to traditional Somerset slipware collections. Emilie’s work will be displayed in the Abbey Barn for Somerset Art Weeks in the autumn.

The Art of the Potter: Somerset Slipware is at the Somerset Museum of Rural Life until November 9 2019

The Museum tells the story of Somerset’s rich rural and social history and provides a family-friendly destination which has learning, access and discovery at its heart.