Reconstruction of arthropod Amplectobelua symbrachiata, thought to be the top predator in the Early Cambrian oceans. Credit: Mighty Fossils

‘What is an animal?’ A new exhibition at Oxford University Museum of Natural History will challenge visitors to ponder this question

Six hundred million years ago the Earth experienced an evolutionary event which has never been repeated. The Cambrian Explosion saw a huge increase in new life forms, many of which laid the foundations for the body plans of all subsequent animal life – in fact life as we know it on earth today.

Through the modern lens, the period of 20 million years in which these new life forms appeared might seem like a slow burn, but in geological terms it was a mere blink of an eye and it saw an extraordinary increase of new life. This exhibition reveals the fascinating fossil evidence of the early earth life forms from this epoch and how they shed new light on our earliest beginnings.

Over 60 incredibly well-preserved specimens, each hundreds of millions of years old, are travelling to Oxford from sites across the globe to tell the story, including a significant loan of 55 fossils from Yunnan University in Chengjiang, China, along with other evidence from the Burgess Shale, Canada and Sirius Passet, Greenland.

Cinderella eucalla is one example of the astounding diversity of Cambrian arthropods found amongst the Chengjiang fossils. This group gave rise to all the arthropods found today. Credit: Derek Siveter 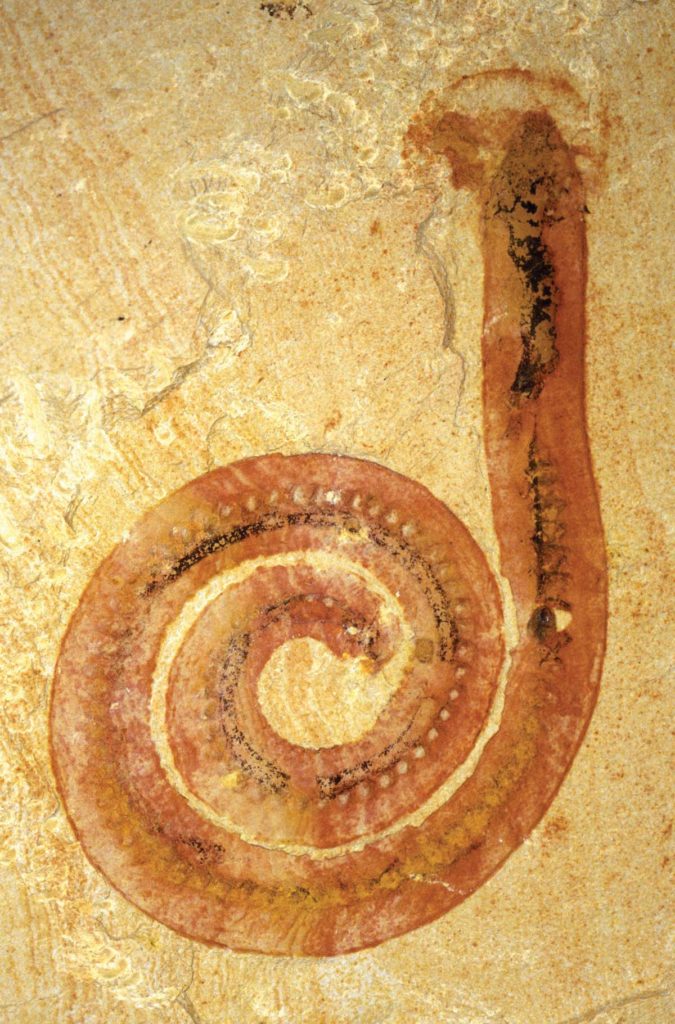 But it’s the unique Chengjiang fossils that are undoubtedly the star loans of the exhibition, and here they sit alongside more than 70 specimens from the Museum’s collection to reveal how the very earliest creatures relate to all the major animal groups today.

Older than other well-preserved fossils from this era the Chinese fossils offer a uniquely complete snapshot of the diversity of animals appearing during the Cambrian Explosion. Their range and preservation make them one of the most informative – and therefore important – Cambrian fossil deposits in the world, providing an insight into the very first animals to inhabit our planet.

The 55 specimens represent 11 of the major groups of animal life as well as a number of enigmatic and starkly different forms, including tiny worms, large predatory arthropods (invertebrate animals such as insects, arachnids and crustaceans) and the early ancestors of vertebrates. 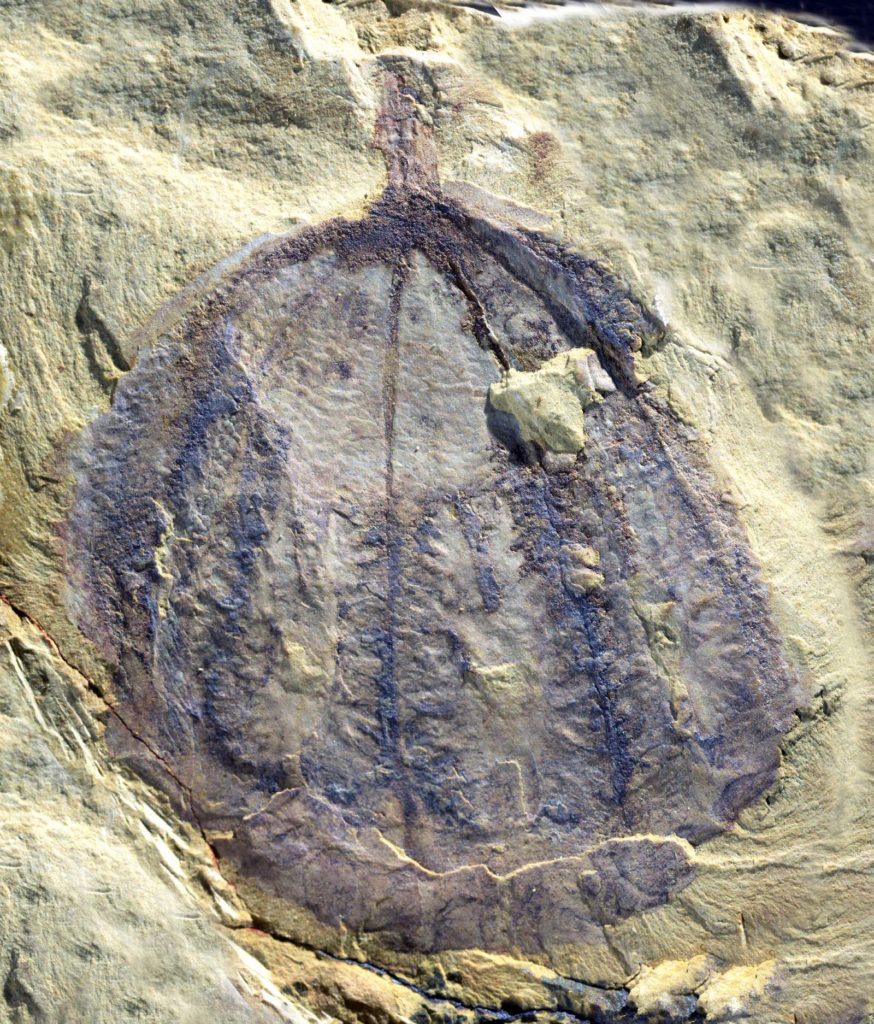 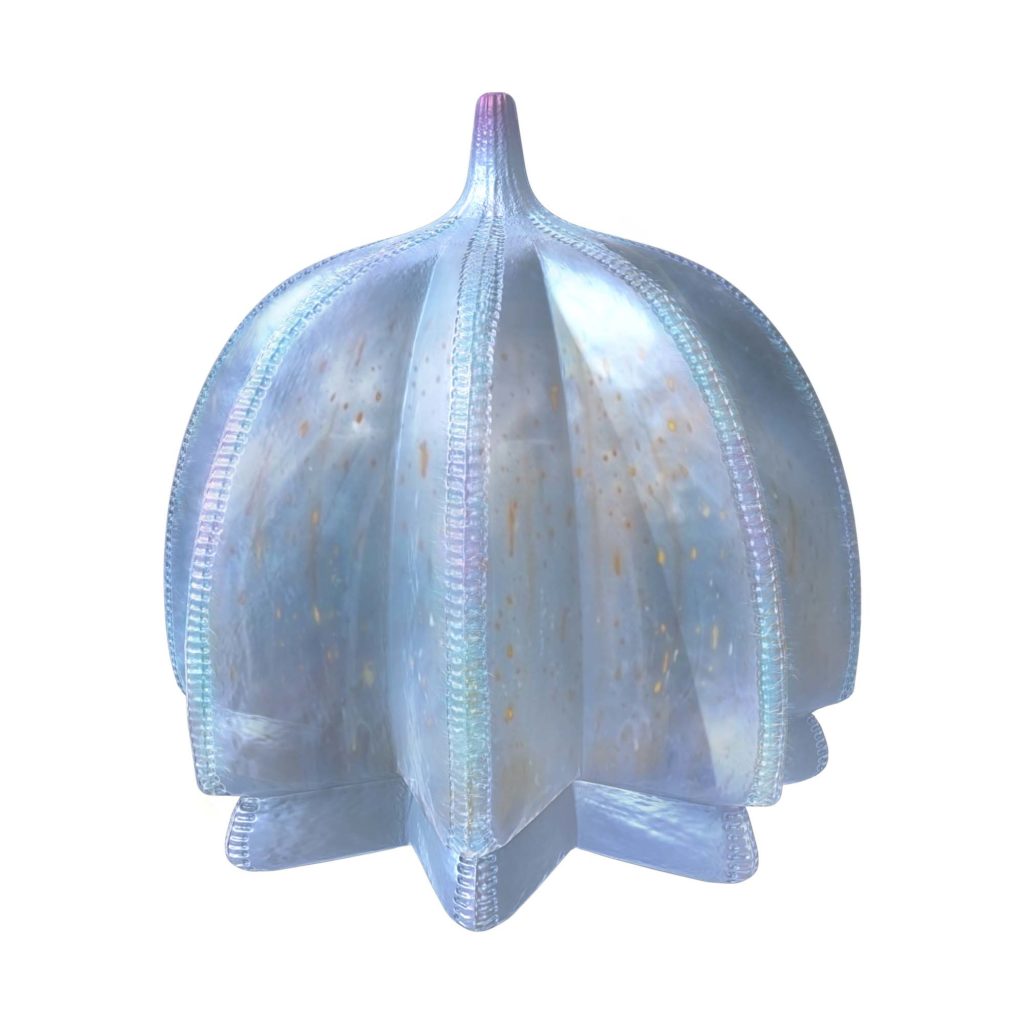 Reconstruction of a shallow sea in what is now Namibia, around 543 million years ago, right before the start of the Cambrian period.

“After billions of years in which bacteria were the only lifeforms, a combination of local and global environmental changes kick-started the evolution of animal life on Earth,” says Museum director Professor Paul Smith.

“First Animals shows how new techniques, analysis and fossil evidence are opening up new understanding of the origins of animal life, now dated to almost 600 million years ago.

“Visitors to the exhibition will encounter strange, enigmatic creatures and ancient ecosystems. They will be able to contemplate their earliest animal ancestor – a hypothetical first animal – and through digital reconstructions will come face to face with creatures that changed the planet forever: the first predators, and the first prey.”

Among the bizarre creatures that lived in these flourishing seas is the penis worm (closely related to the modern penis worm which still lives in our oceans), which burrowed in the Cambrian sea floor sediments and used its fearsome toothed proboscis to capture prey, and the Cinderella eucalla, an arthropod that scientists believe gave rise to all the arthropods found today, from crustaceans to insects. Then there’s the Amplectobelua symbrachiata, a free swimming predator with a jointed body and a pair of jointed appendages which it used to grasp and then devour smaller creatures. 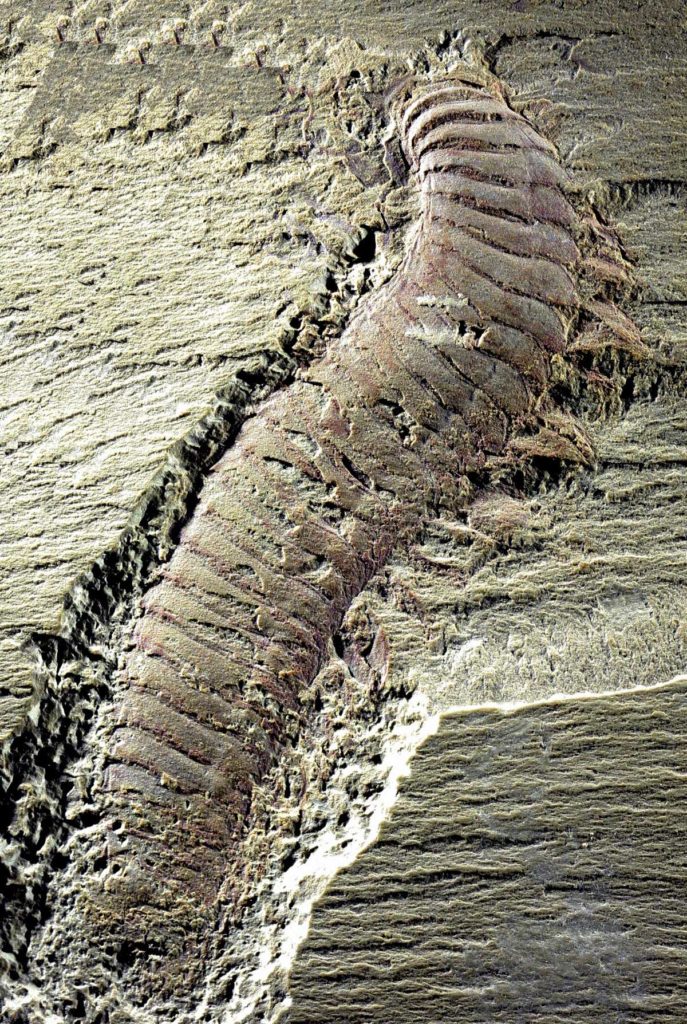 The long, segmented body and multiple pairs of legs of Pseudoiulia have been compared to those of myriapods, the group containing millipedes. But without a preserved head, we cannot be sure.

Reconstruction of a scene from the Ediacaran Period with the early animals (L-R) Charnia, Fractofusus and Haootia. Based on fossils from Newfoundland, Canada. Credit: Mighty Fossils 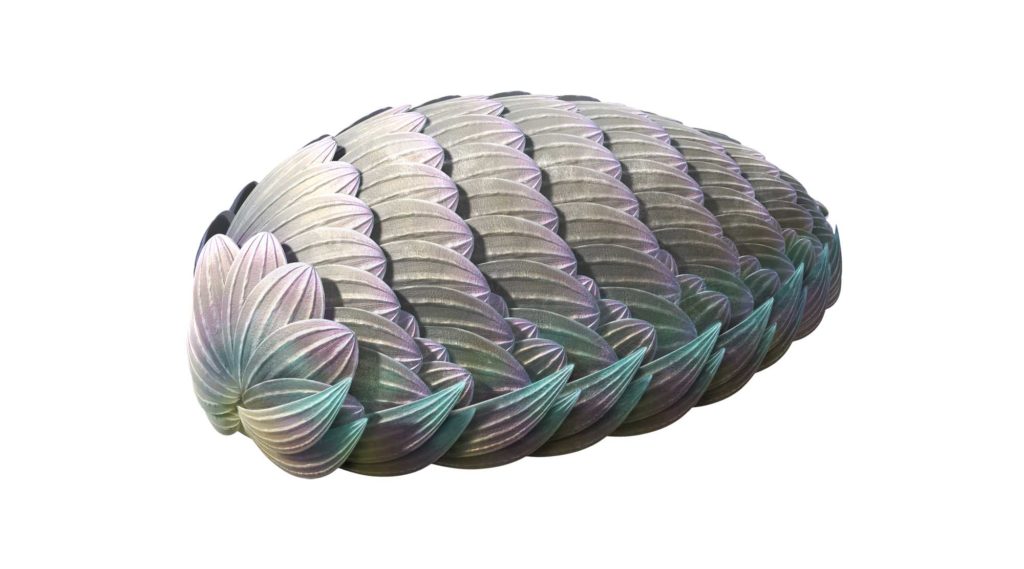 To help visualise this period of profound change for life on earth, an interactive Cambrian Diver installation allows users to explore a 360-degree ocean in a virtual submersible craft. On the dive they will learn more about some of the key animals in the exhibition, and how they existed as part of the very first animal ecosystems.

Digital reconstructions will also bring these enigmatic creatures to life, with the animations helping visitors to visualise what they may have looked like, how they moved, and to understand their roles within an ecosystem.

An artistic perspective on the earliest animal life is presented through a collaboration with the Oxford Printmakers Co-operative (OPC). Twenty-two members of the group have been working closely with Museum research scientists to create individual prints that respond to fossils on display in the exhibition. 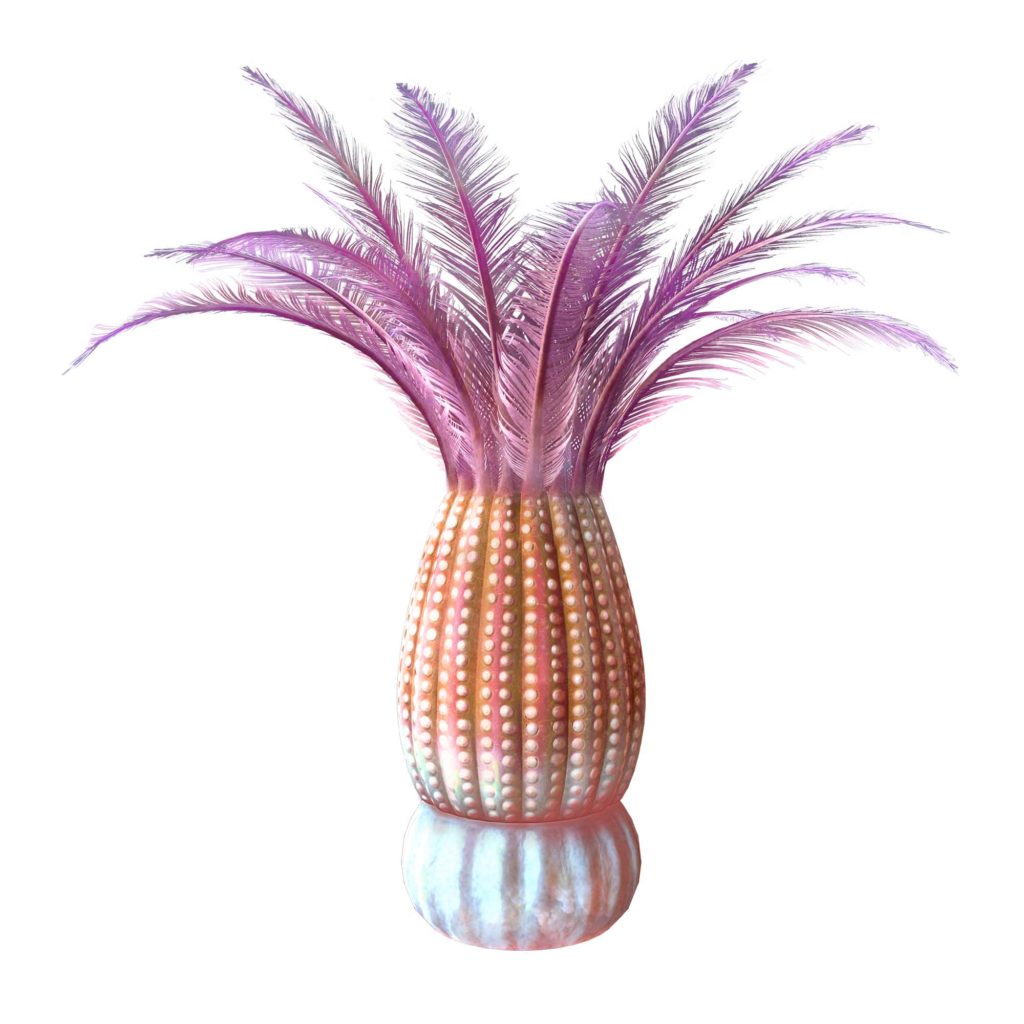 Although it bears an uncanny resemblance to a pineapple this Cambrian animal, Xianguangia sinica, is actually closely related to sea anemones and corals. Credit: Mighty Fossils

First Animals is at the at Oxford University Museum of Natural History from July 12 2019 – February 24 2020. Admission is free.