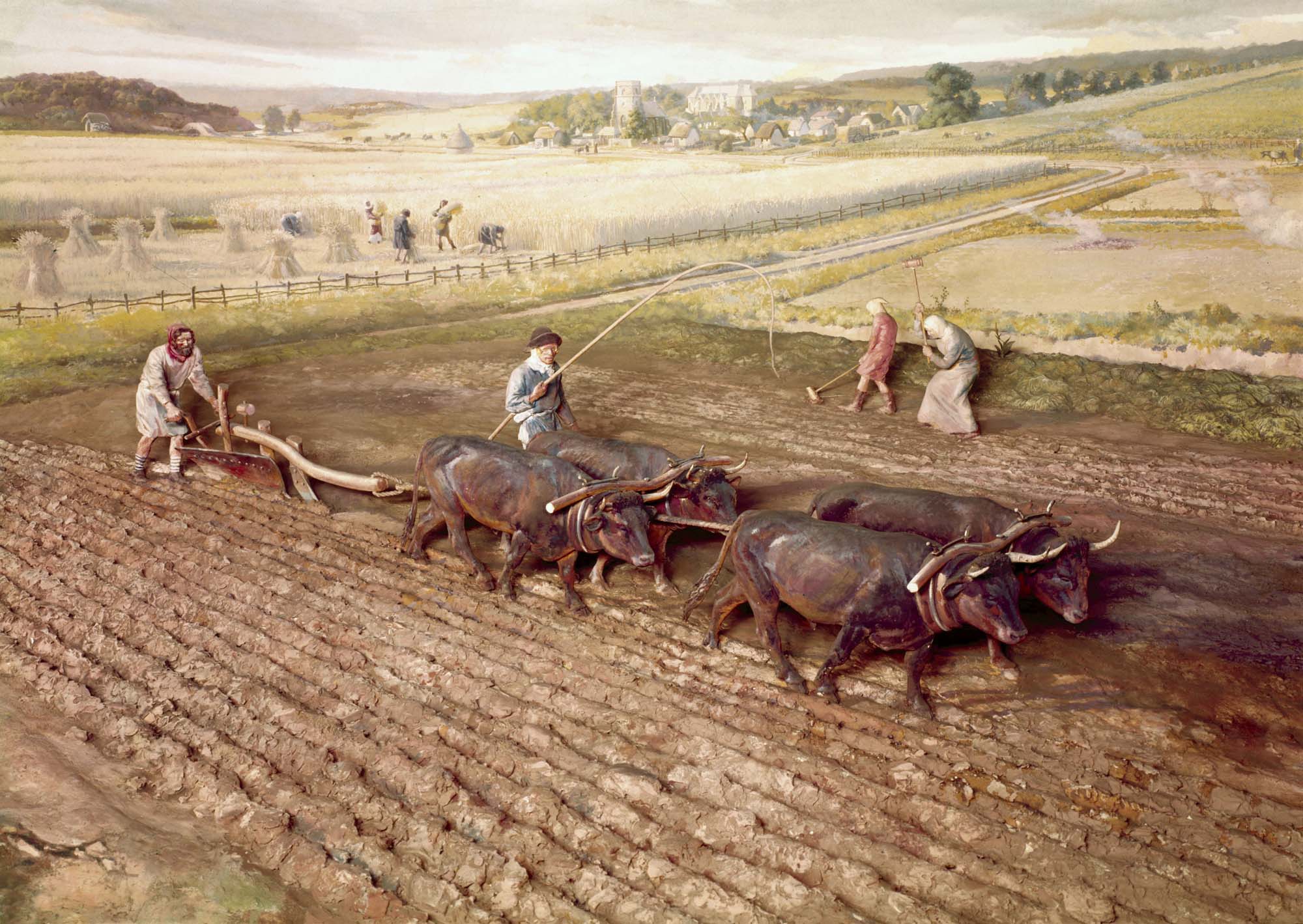 Diorama of Medieval ploughing, 14th century. © The Board of Trustees of the Science Museum

This particular piece was brought to my attention when one of Roussel’s relatives turned up wanting to look at ‘Uncle Raph’s’ work. This was the only example I could show them. The science Museum has over a hundred dioramas in its holdings, but only a fraction of them are on display.

When you start looking at it you realise it’s beautifully made. You can’t tell where it stops being 3D and starts being 2D, where the foreground merges into the background. Even when you’re standing right in front of it, it’s pretty difficult to work out.

The skill Roussel had in spades was the business of skewed perspective. You can’t actually lift the plough and the oxen out of the diorama and stand them on a table, they’d just fall over. In context, though, they seem completely solid. That’s not something that can be done merely competently – it wouldn’t look right. To do it badly is very easy indeed.

Children respond well to it – we had to forever polish nose prints off the glass. If you get down to child height you’re nose-to-nose with the oxen, and it’s really quite a dramatic view from that angle. Children are quite prepared to be entranced by things that may not be particularly convincing to adult eyes, but the thing about the Roussel diorama is that it actually does hold the attention of adults as well. 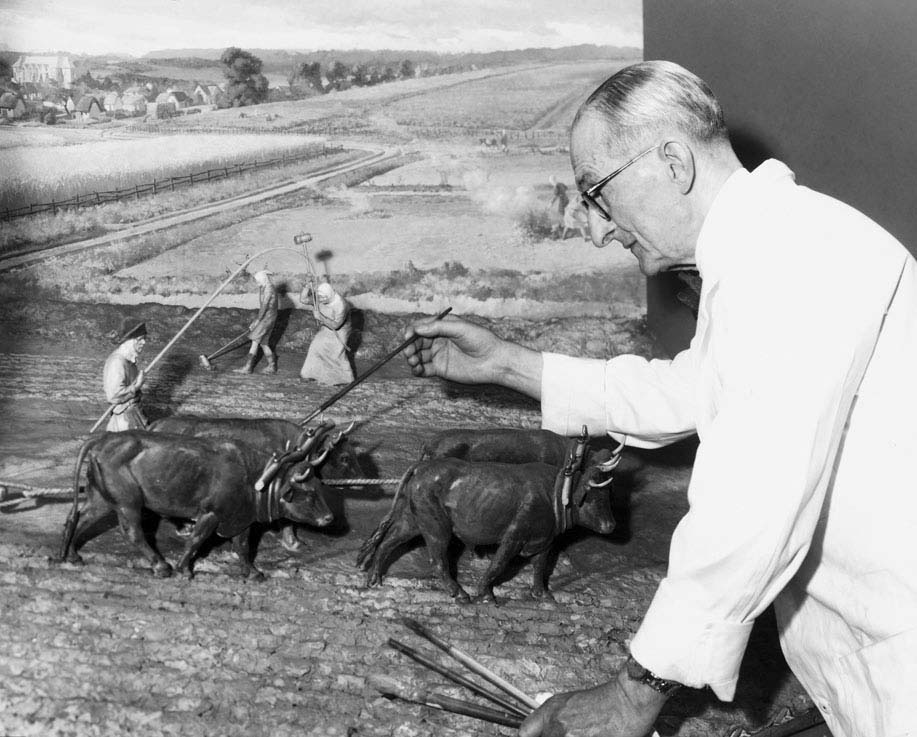 Mr R T Rousell working on his diorama of Mediaeval Husbandry. © The Board of Trustees of the Science Museum

The difficulty in making things look real and relevant in displays, in showing how tools worked and so on, is an enduring one. A person may well not have a pre-existing desire to know about something, and dioramas aren’t designed to leap out and grab people’s attention – they don’t make noise. But once under its spell, people really stand and look at this.

There’s some beautifully subtle detail. It’s based on illustrations showing life in medieval Lincolnshire from a 14th century manuscript called the Luttrell Psalter, but Roussel has rendered the scene in a remarkably lifelike fashion. The scene is obviously cold, there’s a sense of there being frost on the furrows. He’s painted the oxen with a sort of bluish sheen – if you look at the dark hide of a cow in bright sunlight, that’s exactly how it appears. It’s very, very true to life – the observation he was able to bring to this is absolutely stunning.

“A brightly-lit window in an otherwise dark space, through which you can peer into somewhere magically different”

The painting is wonderful. Roussel was trained by his father, Theodore, who was a watercolourist of some repute. Originally, the backdrop had to be painted out and then painted back in again. When the lighting was changed to fluorescent tubes, all of that was wrong, so the museum would’ve had to call Roussel back in to re-paint the model in order to ensure it had just one sun in the sky, so the shadows made sense again. We have a photograph of him doing that in 1953.

Before Roussel became known as a builder of dioramas, he painted graphics and designed posters for railways and shipping lines. Dioramas became a very popular type of display in the 1930s, and Roussel ran a studio devoted to them. He died in 1967, and I think only a couple of the generation of diorama artists who followed him even approached the quality of his work.

Ever since, the technique has flickered in and out of fashion. You see models everywhere, but dioramas are less related to model villages, which offer the sheer entertainment of an oversized dolls house, than they are to theatre – that idea of a brightly-lit window in an otherwise dark space, through which you can peer into somewhere magically different to where you’re actually standing.

Here are some of our favourite dioramas from the Science Museum collection:

Surgeon Pare treating the wounded in the open air 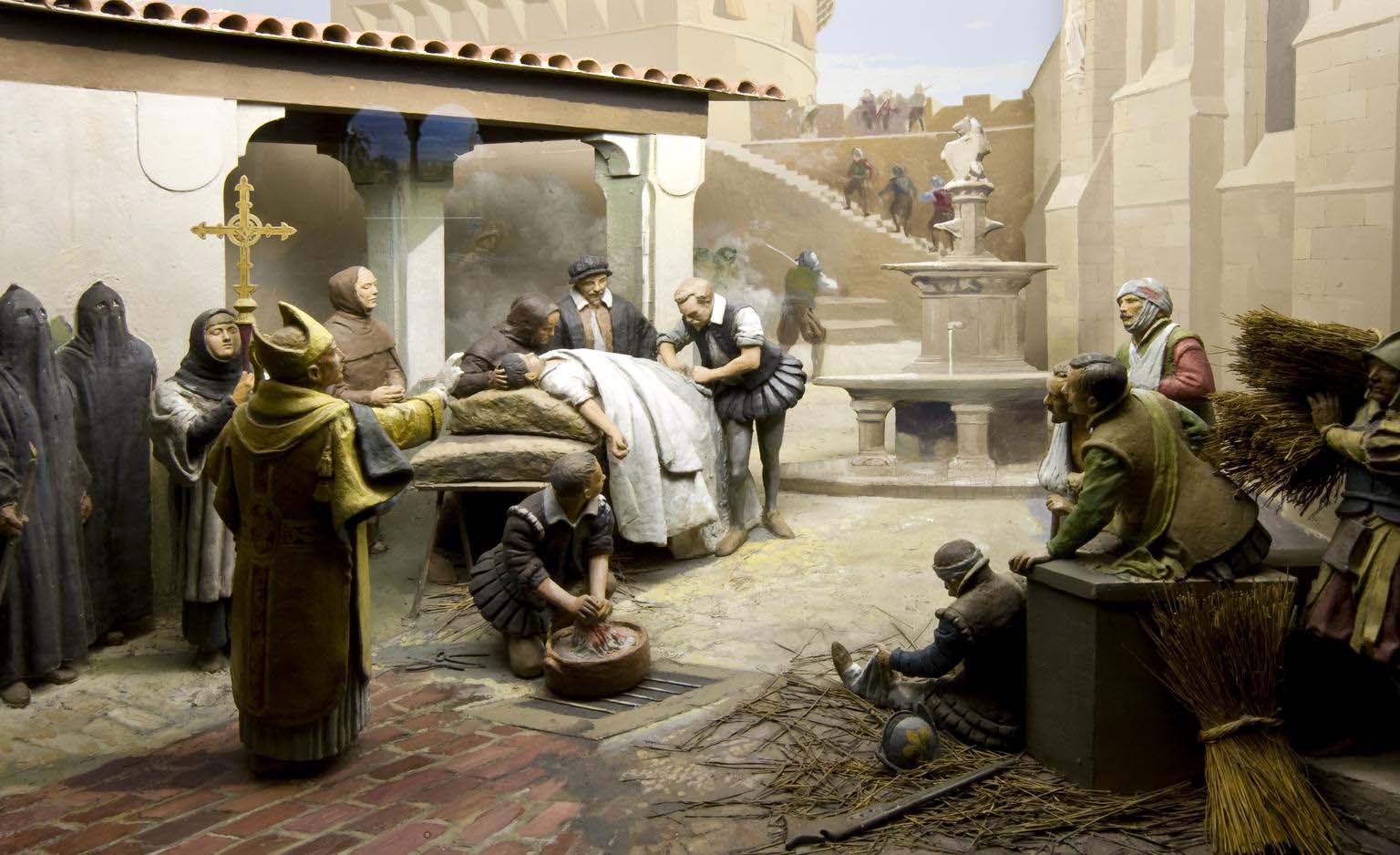 Diorama “The Advance of Surgery showing Pare treating the wounded in the open air” , English, 1901-1970. © The Board of Trustees of the Science Museum

Pioneering French surgeon Ambroise Paré (c. 1510-1590), treats the wounded outside a cathedral as the battle rages on the battlements beyond. Reconstructed from a painting at the Sorbonne in Paris, Paré is shown demonstrating an important technique he introduced to tie off blood vessels after amputations. Previously, blood vessels were sealed using boiling oil or a cautery, causing further agony to the patient who only had alcohol or herbal remedies for pain relief. As well as the injured soldiers looking on a group of religious figures include a pair of intriguing hooded figures and a bishop who blesses the surgeon’s efforts. 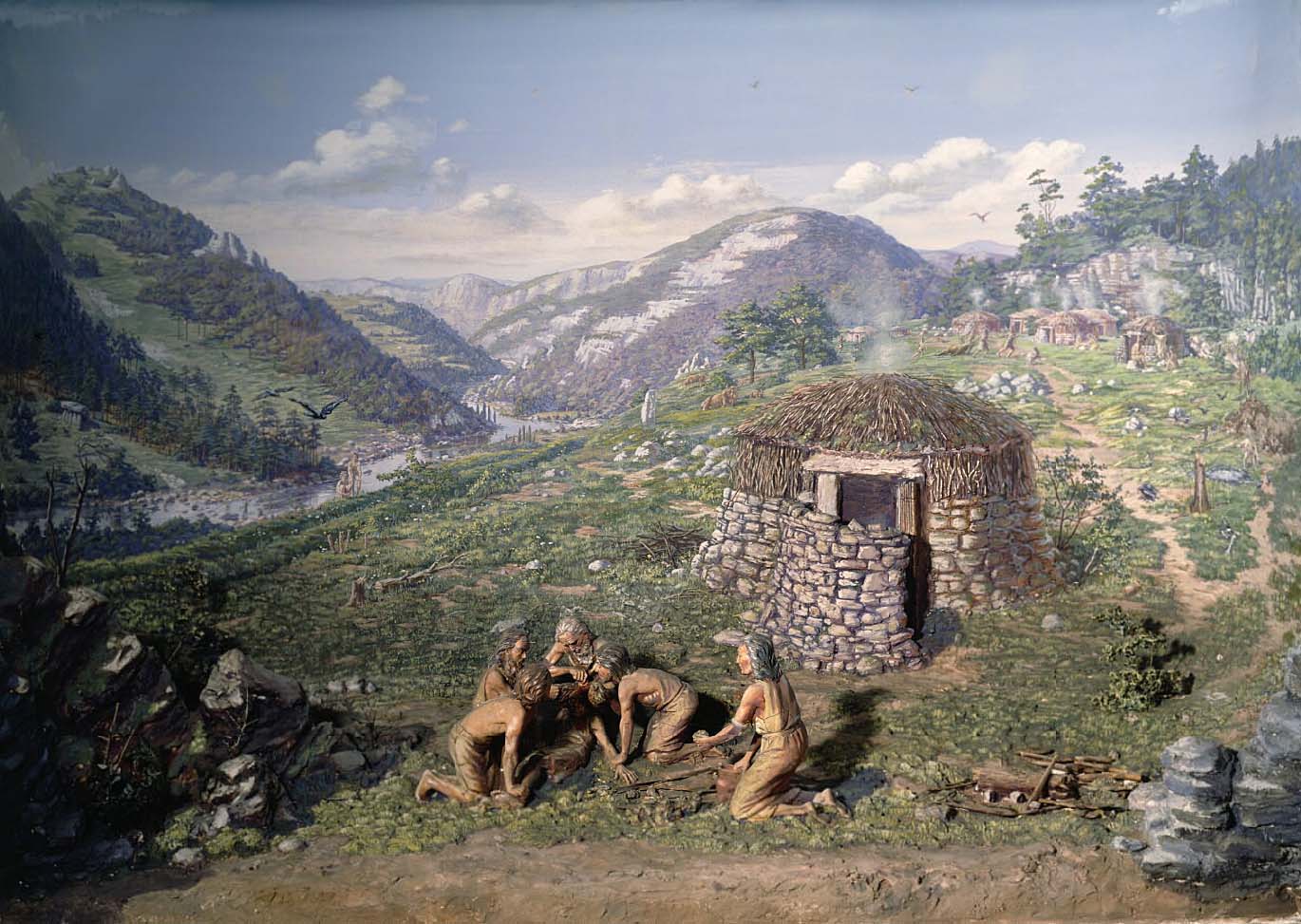 Diorama showing trephination in Neolithic times, England, 1942. © The Board of Trustees of the Science Museum

Probably the oldest surgical procedure, trephination involves cutting into the skull to remove a small area of bone and is thought to date from around 5000 BCE. Set in the Neolithic period (the latter part of the Stone Age), this diorama shows trephination in progress. Tools, such as pieces of flint and sharp animal teeth, were used to cut into the skull. It would have taken a long time to carry out the procedure and with limited pain relief the person undergoing the operation would have to be physically restrained.

Lavoisier carrying out an experiment in Paris in 1789 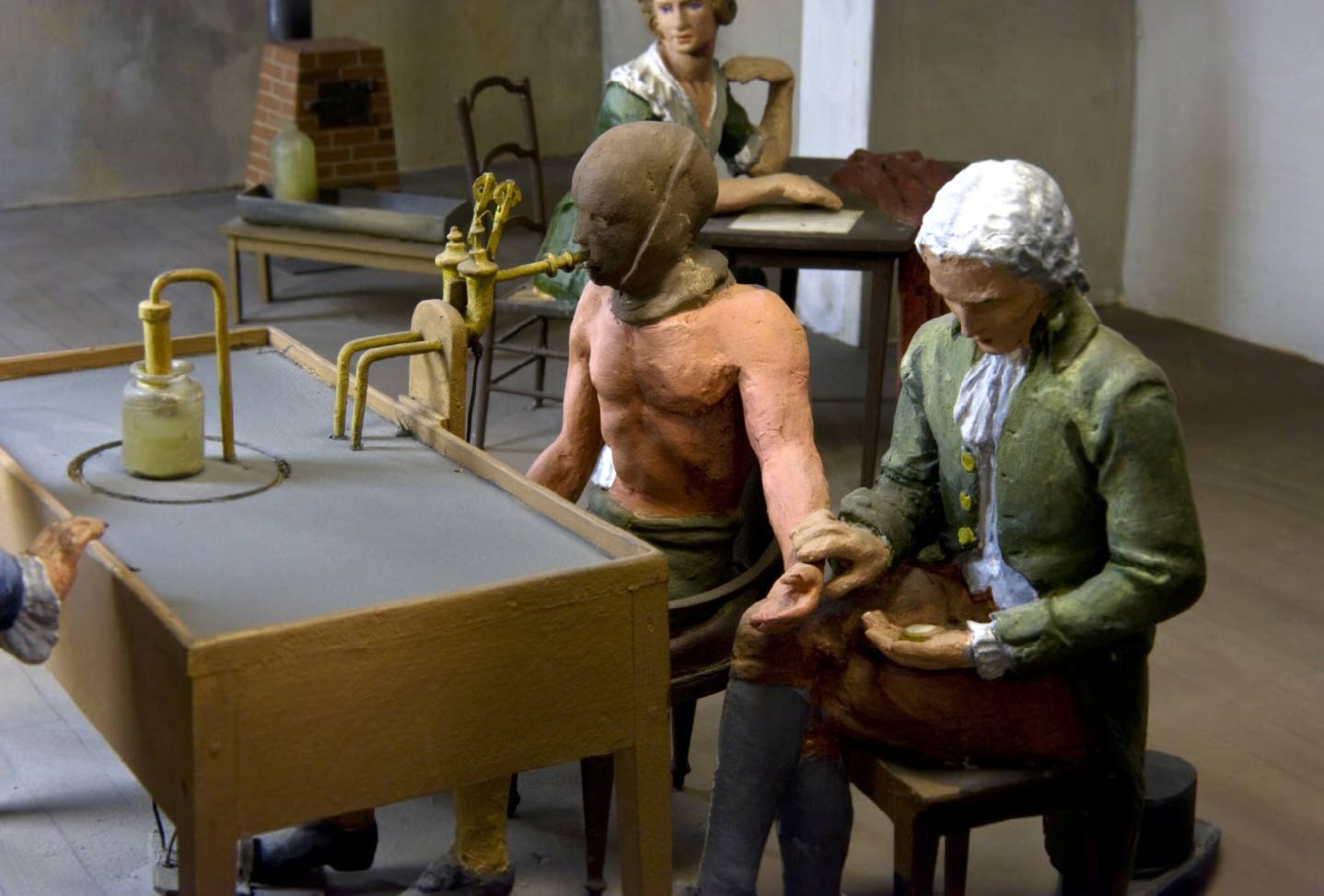 Lavoisier carrying out an experiment in Paris in 1789. © The Board of Trustees of the Science Museum

The great French chemist Antoine Lavoisier (1743-1794), considered the pioneer of modern chemistry, conducts an experiment on breathing. His assistant, Armand Séguin (1767-1835), is wearing a rubber mask connected to a spirometer to measure the amount of air breathed in and the amount of carbon dioxide breathed out as Lavoisier takes his pulse. The diorama, which was made by Wellcome Institute, London, 1945-1960, is based on a sketch by Lavoisier’s wife, Marie-Anne, who can be seen taking notes in the background. 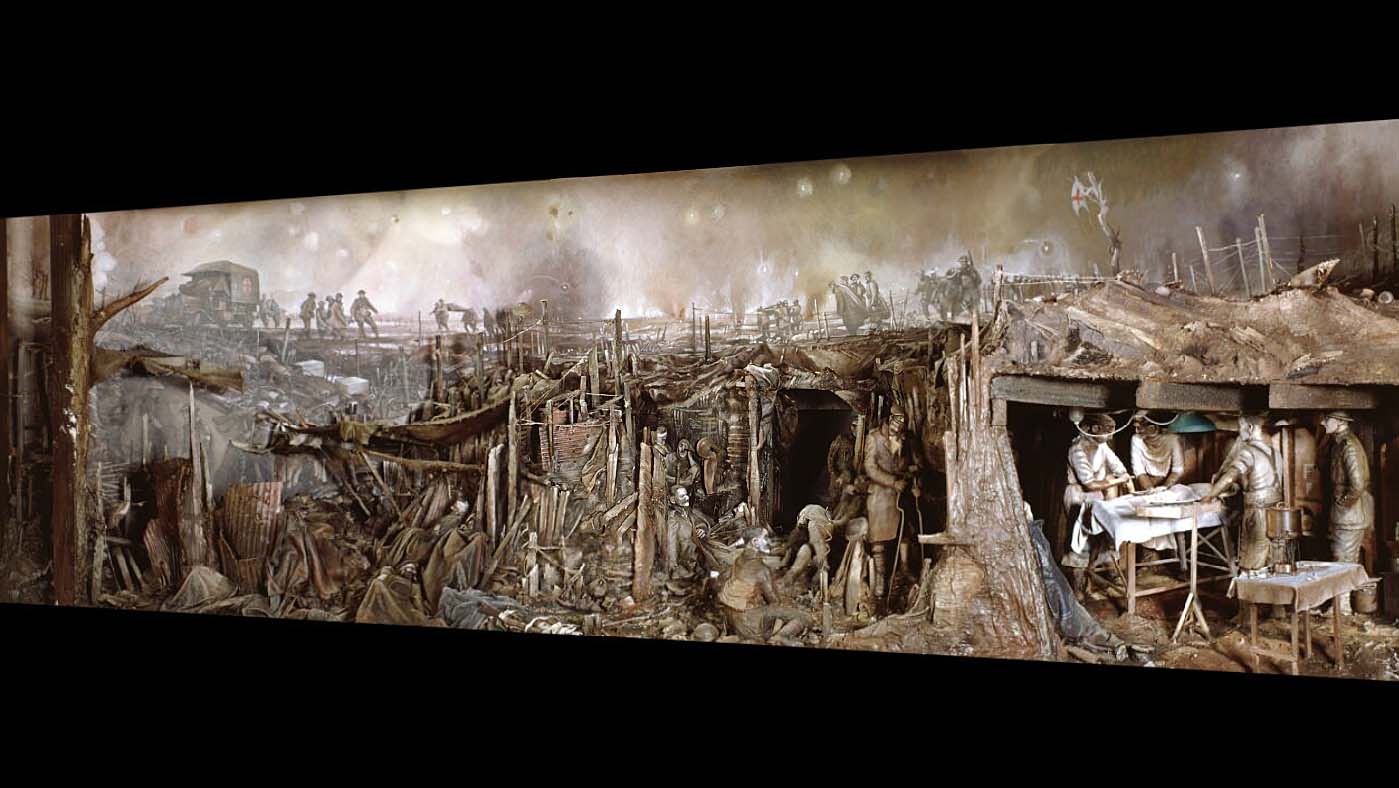 First World War field dressing station, England 1979. © The Board of Trustees of the Science Museum

This nightmare scene shows a familiar sight during the First World War, injured soldiers being carried by stretcher bearers from dressing stations to casualty clearing stations further behind the front line. The surgeon on the right hand side is using a kitchen table as an operating table and his instruments are being sterilised using an autoclave heated by a small portable stove.

All medical and surgical equipment had to be light enough to carry to wherever it was needed. Soldiers could experience a range of injuries caused by artillery, bullets or poison gas. Sixty-five million troops fought during the First World War, of which eight million were killed and nineteen million were wounded.

Basic oxygen steelmaking plant. Diorama. © The Board of Trustees of the Science Museum

This dramatic diorama takes us inside a steel plant using the Basic Oxygen Steelmaking (BOS) process. BOS is the dominant technology in the production of crude steel and requires vast six storey buildings to accommodate the Basic Oxygen Furnace which can weigh as much 250 tonnes.

“Childbith in the 1860s”, diorama for Lower Wellcome Gallery, which includes adminstration of anaesthetic. © The Board of Trustees of the Science Museum

This diorama illustrating a home childbirth in the mid 19th century shows a doctor and nurse administering an anaesthetic to a woman in labour. Anaesthesia was used from the 1850s to relieve the pain of childbirth. A servant is entering the room with a large kettle and a fourth attendant, possibly a relative, is standing at the bed with an anxious expression. The doctor is the only man present at the birth. The interior scene was made in 1979 by Derek and Patricia Freeborn Ltd, in East Horsley, Surrey, England.

Surgery on board ship 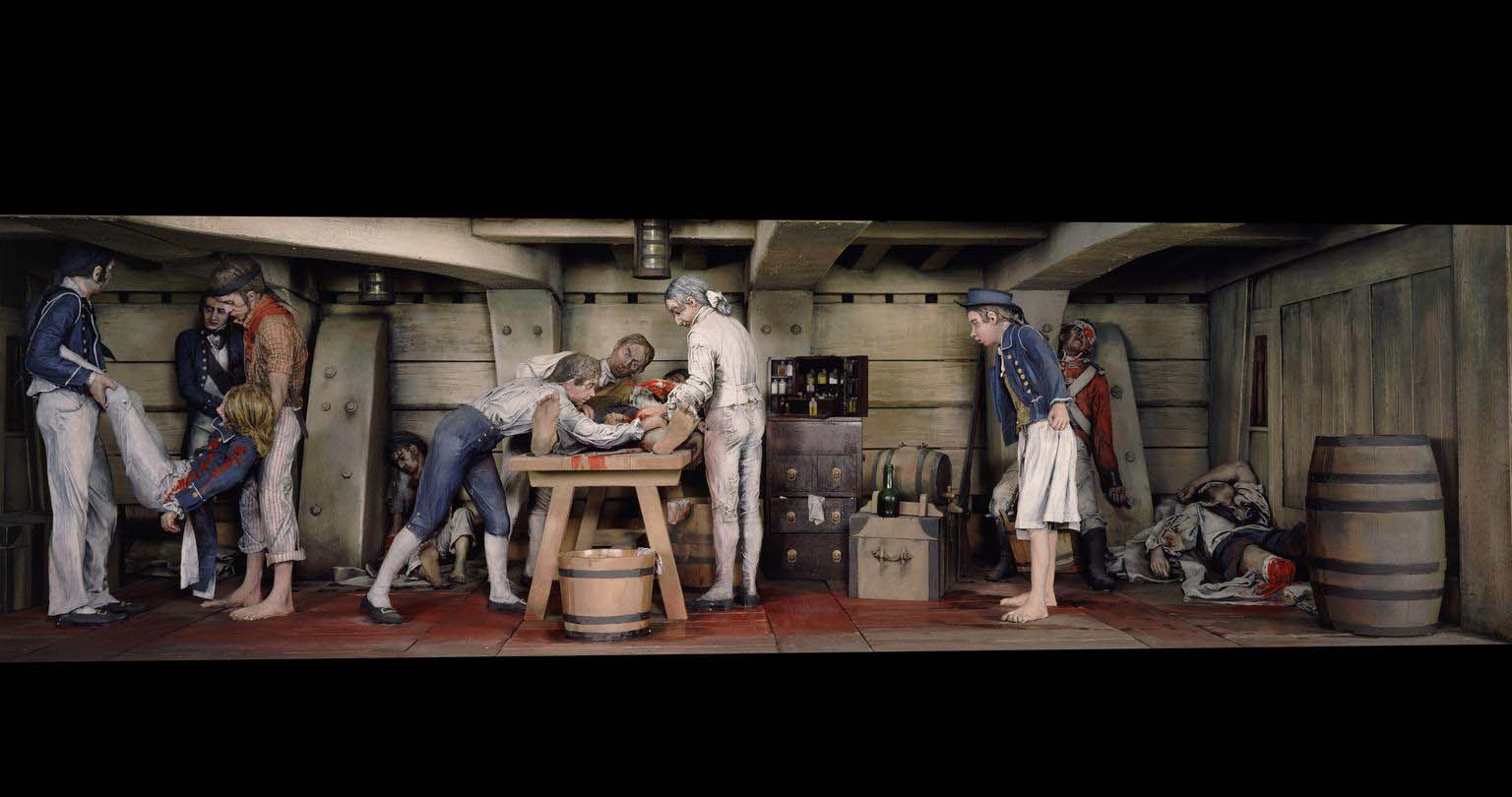 “Naval surgery in 1800” diorama in Lower Wellcome Gallery. © The Board of Trustees of the Science Museum

A tub beside the ship’s surgeon is already filled with limbs in this grisly scene depicting the surgeon’s deck during a 1800s sea battle. A sailor is having his leg amputated because a large piece of wood is embedded in it. Anaesthetics were not yet in use so sailors had only alcohol for pain relief and a piece of leather to bite on when the pain was at its height. At this time, sailors were treated in the order they arrived rather than by their injuries – today they would be prioritised according to the severity of their injuries. Infections and blood poisoning spread easily as the same equipment and sponges were used on everyone without being washed after each patient was treated.

All images used with a Creative Commons Attribution-NonCommercial-ShareAlike 4.0 Licence

Explore these and other objects in the Science Museum’s collection search collection.sciencemuseum.org.uk/

One comment on “A brightly-lit window in an otherwise dark space: the museum diorama”