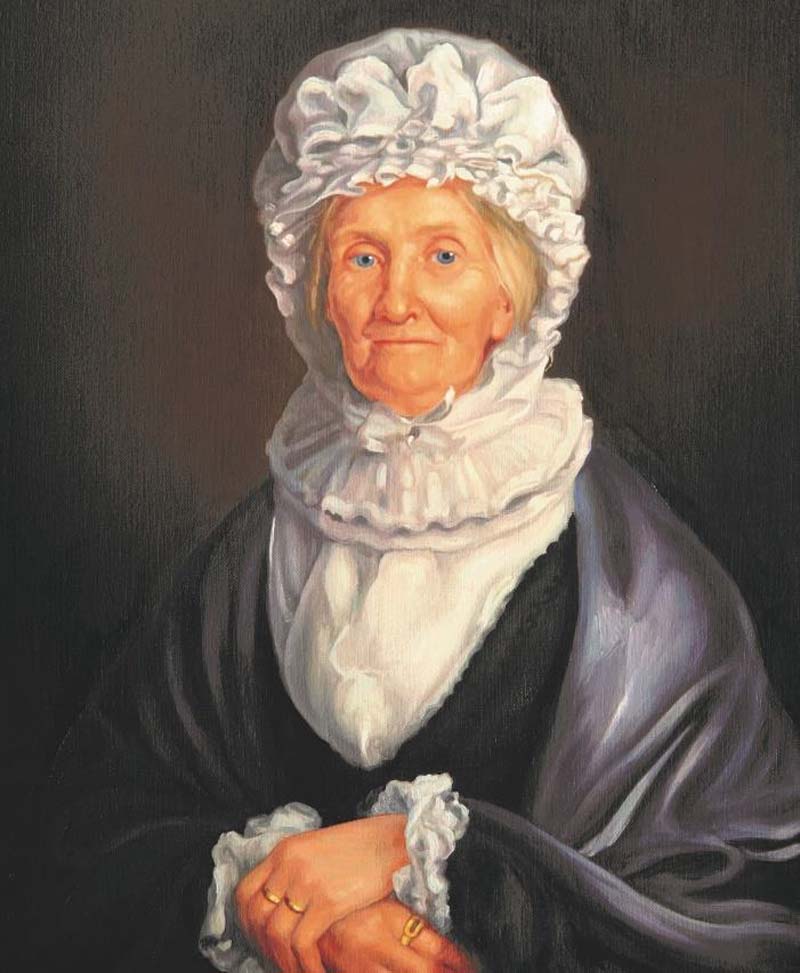 Lynn Walker, Volunteer at the Captain Cook Memorial Museum in Whitby tells a story of love, death and remembrance via the tragic life of Elizabeth Cook and her mourning brooch, which is held in the museum collection

If ever a person earned the right to wear and cherish a mourning brooch, that person was Elizabeth Batts Cook the wife of the celebrated Captain James Cook. Tragically, Elizabeth spent 42 of her 93 years in mourning alone, after the deaths of her six children and beloved husband. In the Captain Cook Memorial Museum, Whitby, we have the mourning brooch that belonged to her.

Mourning brooches are a way to remember loved ones and typically, these brooches would contain a lock of hair of the deceased which brought comfort to the wearer and was a visible sign of mourning. Mourning brooches are often associated with the Victorians and Queen Victoria’s penchant for jet, but we know that they were also popular at least a century before.

Elizabeth’s brooch is inscribed on the reverse “Mrs. Elizth Cook Widow of the Circumnavigator / Obit 3 May 1835 aet 93”. It does contain a lock of hair, but it is not known who it belonged to; it may have been hers rather than Cook’s. Elizabeth left money in her will to several people to make commemorative items, and the black enamel surrounded by seed pearls was typical of the early 19th century.

Elizabeth Batts Cook was the daughter of Mary and Samuel Batts, the innkeeper of the Bell Inn at Execution Dock in Wapping, London. She lived a remarkably long life (born 4.2.1742 and died 13.5.1835). We can imagine that her early years as an Innkeeper’s daughter would have been full of stories of death as Execution Dock, which was opposite the Alehouse, was used for more than 400 years to hang pirates, buccaneers, smugglers and mutineers who had been sentenced to death by the Admiralty Court. The last executions were in 1830 and Elizabeth died five years later. 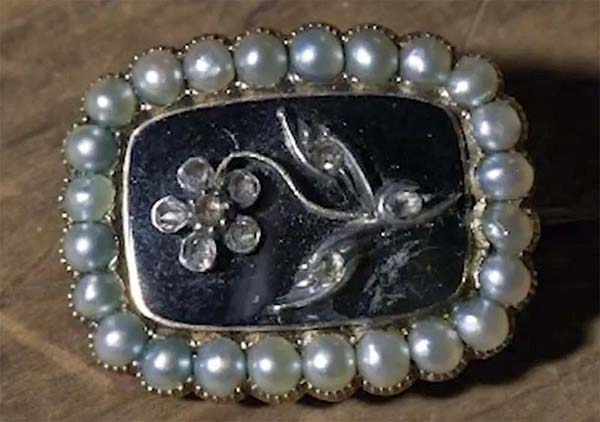 Elizabeth was married to Captain James Cook RN from 1762 to 1779, though she only spent a sporadic total of four years with him due to his life of seafaring and exploration. Although he was older than her by 14 years, it was clearly a love match. Many letters were written between the two but Elizabeth destroyed them before her death.

They married at St Margaret’s Church, Barking, Essex on 21 December 1762 after James Cook had become a Master in the Navy. They bought a house on the Mile End in which Elizabeth lived until 1788 when she moved, as a widow, to Clapham. James was earning a decent wage and he was able to take his bride north to meet his father which showed his regard for her as it would have been an expensive and long trip and not one to be undertaken lightly.

During their short time together, they nonetheless produced five sons and one daughter. Unfortunately, James was killed at Kealakekua Bay in Hawaii in 1779 but Elizabeth remained true to his memory and never married again.

The first child was a son, James, who was born on 13 October 1763. James followed in his father’s footsteps, and from 1774 he was educated at the Royal Naval Academy. He rose to become Commander James Cook. He commanded the HMS Spitfire, a 14 gun sloop-of-war, but was drowned in a boat accident with six of his crew off the Poole coast on 24 January 1794.

Their second child was Nathaniel, born just over a year later on 14 December 1764 destined also to a seafaring life, although a short one, as he too died at sea on 3 October 1780. At just 15 years old Nathaniel was a midshipman but went down on the HMS Thunderer during a hurricane and all 617 souls were lost off the Jamaican coast. 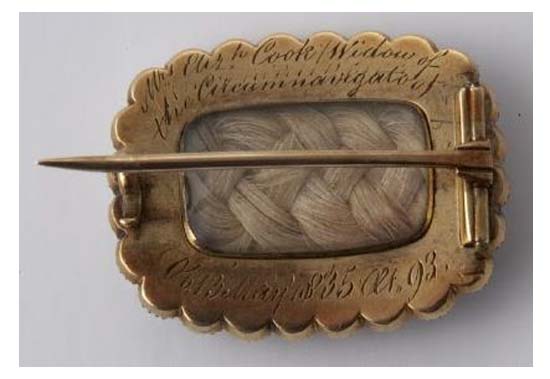 The back of the brooch with inscription and a lock of hair. © Captain Cook Memorial Museum

Their only daughter, Elizabeth was born on 14 September 1766 in Mile End. She was baptised two years later on 22 September 1768 at St Dunstan in Stepney just before her father left on Endeavour for his first voyage of circumnavigation. Tragically she died on 9 April 1771 at the tender age of just four of dropsy, before his return. This was a harrowing diagnosis which is now known as Oedema (fluid retention) but in those days could include heart, liver or kidney failure which must have been unbearable to witness in a child, especially as Elizabeth found herself alone.

Their third son Joseph was born on 17 August 1768, the week before his father sailed from Plymouth on 25 August. Tragically Joseph did not survive and was dead one month later. Cook had already set sail on his first voyage of exploration leaving Elizabeth to mourn two of her children alone. On his return, Elizabeth quickly became pregnant and George was born 8 July 1772 but died only four months later. She must have been heartbroken with three children dead within four years.

Hugh, born 22 May 1776 was their youngest son and was named after Cook’s friend and fellow naval officer, Sir Hugh Pallister. Just after his birth, James left on his third and final voyage so never knew that Hugh became a student at Christ’s College at Cambridge University in February 1793. It is thought that Elizabeth had high hopes that Hugh would become a priest and thus not follow his two brothers and father into the Navy. These were dashed when Hugh contracted scarlet fever in the same year and was buried on 24 December 1793.

Hugh at 17 and James at 31 died within weeks of one another and poor Elizabeth took to her bed for two years with the shock of now losing all her children and her husband. Thereafter, she observed a four days fast on the anniversaries of each of her tragic bereavements. She spent these days alone, meditating with her husband’s bible. 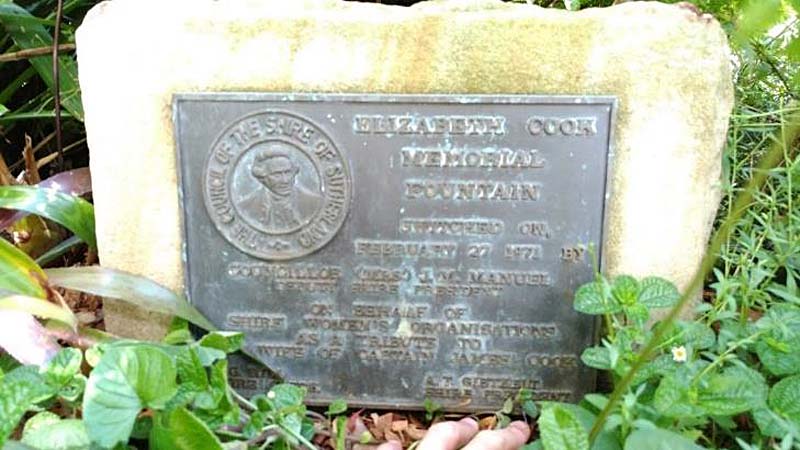 Elizabeth is buried in St Andrew the Great Church, Cambridge, reunited with her two sons, James and Hugh in the central aisle.

As well as the brooch in The Captain Cook Memorial Museum, Elizabeth always wore a mourning ring which is said to contain a lock of her husband’s hair and is now in the State Library of New South Wales.

Elizabeth is also remembered in the National Camellia garden, Caringbah, Sutherland Shire, Australia. The Elizabeth Cook Memorial Fountain installed in 1971 is a beautiful tribute to the strong, loving mother and wife of Captain James Cook.