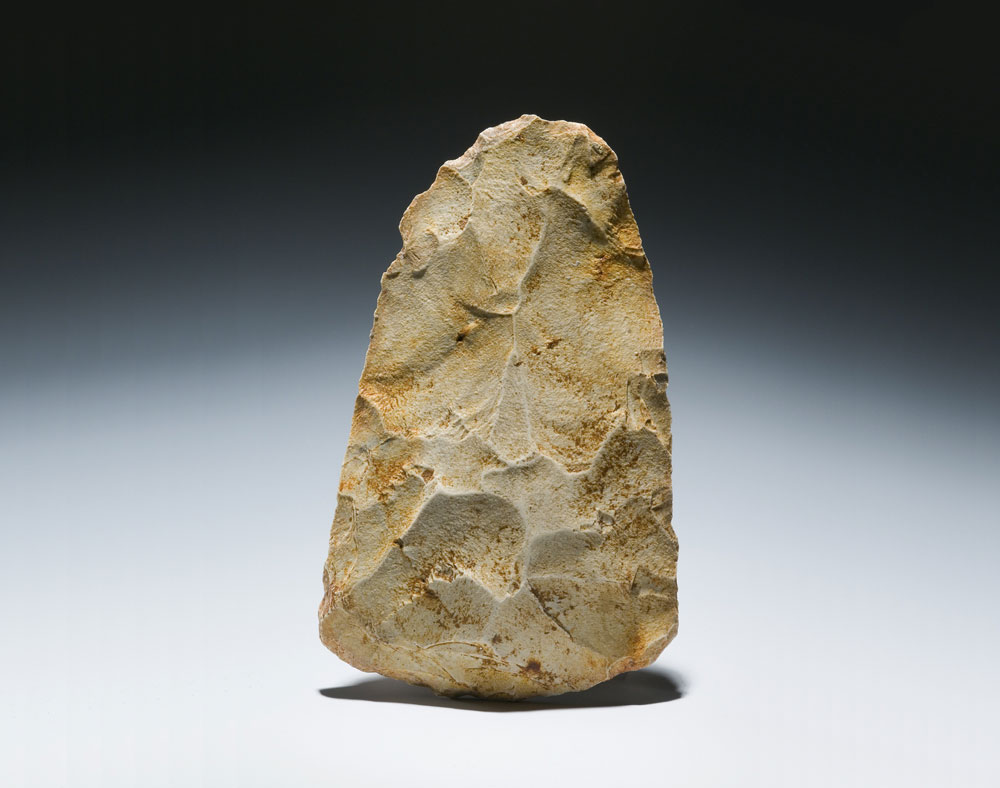 Elizabeth Walker, Palaeolithic & Mesolithic Archaeologist and Head of Collections at National Museum Cardiff, talks about a Neanderthal hand axe, which dates back to c. 60,000-35,000 BC

This hand axe was found during excavations at Coygan Cave, near Laugharne, Carmarthenshire, in advance of the cave’s destruction by quarrying in the 1960s. It is of a form typically made by a Neanderthal and was left at the cave with another similar tool sometime between 60,000 and 35,000 years ago.

Findings like this hint that Neanderthals may have lived in the Carmarthenshire area, but we have no evidence of their physical remains. The two axes we have were found near the wall of the cave, and it’s been suggested they were deliberately cached by their owners, who intended to return to the cave to use them on a future visit.

What happened to those owners is of course unknown, and we have no Neanderthal remains of this date from sites in Wales. It’s always interesting to speculate, though. Perhaps they were passing through and sheltered in the cave for the night, before setting off down the valley the following morning to hunt.

This is a particularly good example of a Neanderthal hand axe. Real, true Neanderthal tools tend to be beautifully crafted, and very distinctive in their shape and form, quite unlike those made by their hominim ancestors. There’s a sense that this was made with a certain amount of pride.

The axe has been hewn out of a chunk of rhyolitic tuff. Typically, Neanderthal tools were made from flint, but there’s no good flint source in Wales, so the maker has had to use an alternative, locally available material.

Rhyolite isn’t as fine-grained as flint, and doesn’t flake in quite such a crisp way. As a result, this axe doesn’t have quite the same sharp flake scars you’d see on a tool made from a more siliceous stone. Even so, the maker has shown considerable skill in working this comparatively difficult material – the axe still has all the characteristics you’d usually expect to see in a tool of this type.

To begin with, the stone would have been knocked into shape using a hard, percussive hammer-like instrument, perhaps a pebble. The thinner, finer flakes would have been removed using a softer material such as bone or antler – you can really see the affect of that across the surface of the object.

Neanderthals are fascinating. They shared a common ancestor with us, yet they were an evolutionary dead-end and died out sometime after anatomically modern humans like ourselves entered Britain. It’s a very strange sensation to look at a tool made by a Neanderthal and consider that it was essentially made by a different species.

A lot of work has been done about the ways Neanderthals’ brains may have worked, and it is now thought that they had the capacity to express themselves through song. I worked with a local composer, Simon Thorne, who picked up on this idea and created a soundscape to play in the museum’s Origins gallery, in the area where we display the hand axe.

The idea was to provide an imagined landscape of what sounds a Neanderthal may have both made and heard, and I know Simon gained a certain amount of inspiration from handling this axe and visiting the caves like the one in which it was discovered.

Discover art, archaeology, natural history and geology. With a busy programme of exhibitions and events, we have something to amaze everyone, whatever your interest – and admission is free! Although not the oldest of Amgueddfa Cymru – National Museum Wales’s buildings, this is the first location of National Museum Wales,…