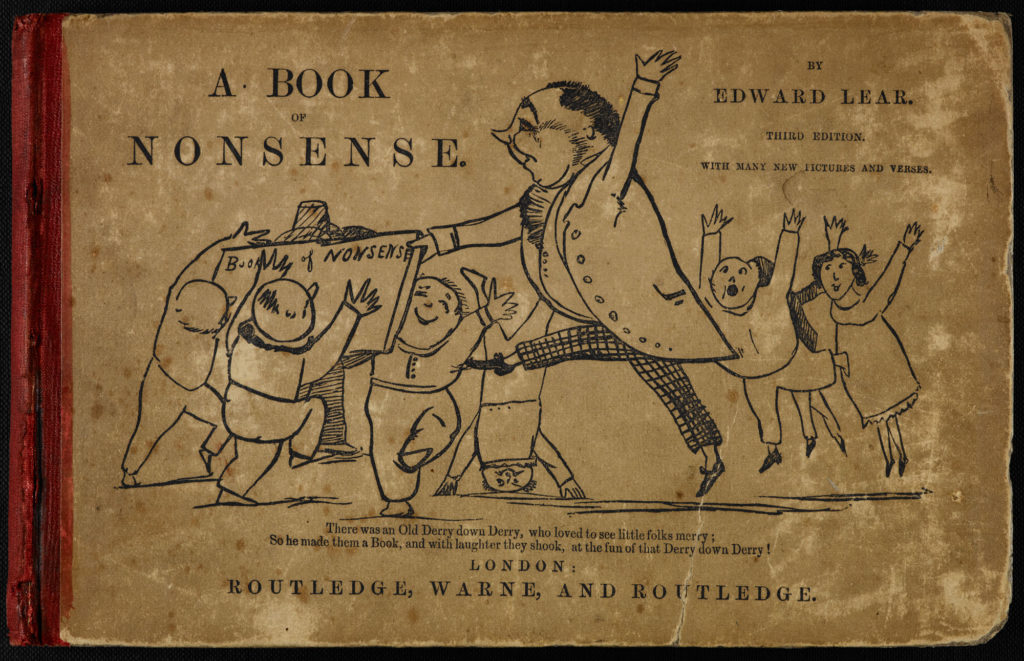 You can also take a closer look to some of the earliest printed works created for a young readership and an array of movable, miniature, noisy and toy books, propaganda stories, comics, poems and fairy tales drawn from four major cultural institutions: the British Library, Seven Stories The National Centre for Children’s Books, Bodleian Libraries, University of Oxford and the V&A.

Below is a selection of Museum Crush favourites:

YouTuber? Professional footlballer? Britain’s Got Talent-show-winner? Children’s aspirations have undergone a seismic shift since the dawn of the nineteenth century – especially if this pack of cards is to be believed.

Grocer, painter, bookbinder, brewer, shoemaker, bricklayer and cooper are just some of the occupations on offer in this rare toy, which as the British Library points out, was probably never seen or used by the working class children who went into many of these occupations.

Made by the publisher John Marshall the cards were one of several cards sets he produced called ‘infant’s cabinets’ with subjects ranging from fish and flowers to shells and street traders.

Find out more at www.bl.uk/collection-items/the-infants-cabinet-of-trades

The History and Adventures of Little Henry 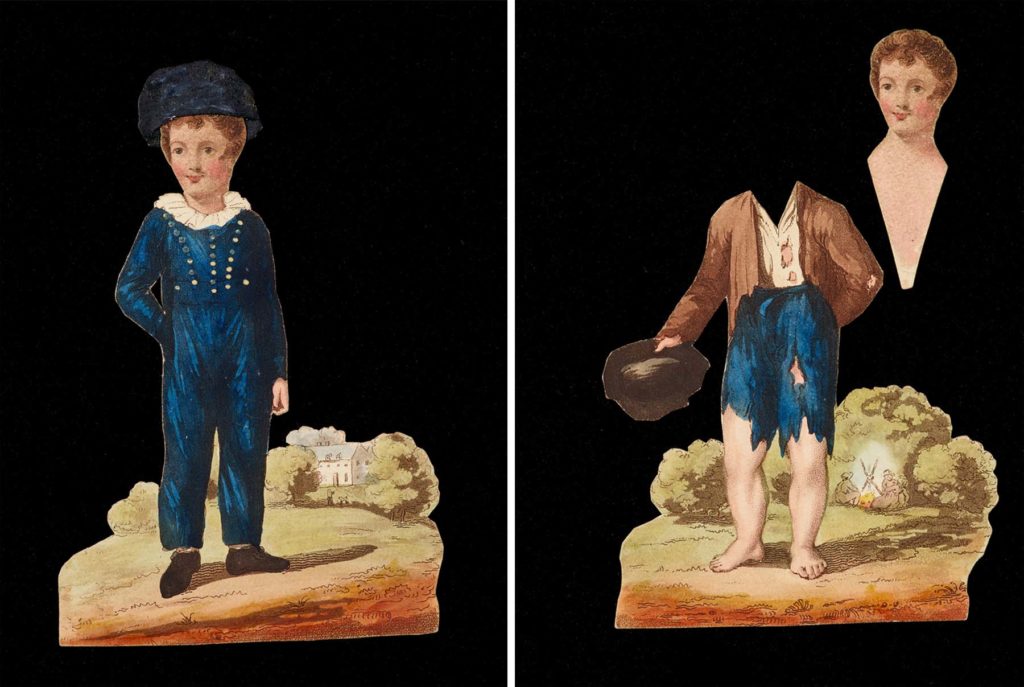 Poor little Henry, one minute he’s wearing his silk jumpsuit and living in a fine Georgian country house, the next he’s cast outside in rags. A kind of interactive story, known as a doll book, the reader changes Henry’s outfit to suit his changing fortune.

The 1810 book, published by S and J Fuller, comes with movable parts – a cut-out head, three hats and seven figures. The story meanwhile is a typically Napoleonic-era picaresque in which the boy is stolen by a gypsy and sold to a chimney sweep. Aside from the negative stereotyping, the book offers a lively tale of derring-do complete with military service and an eventual reunion with his parents.

Find out more at www.bl.uk/collection-items/the-history-and-adventures-of-little-henry-a-paper-doll-book 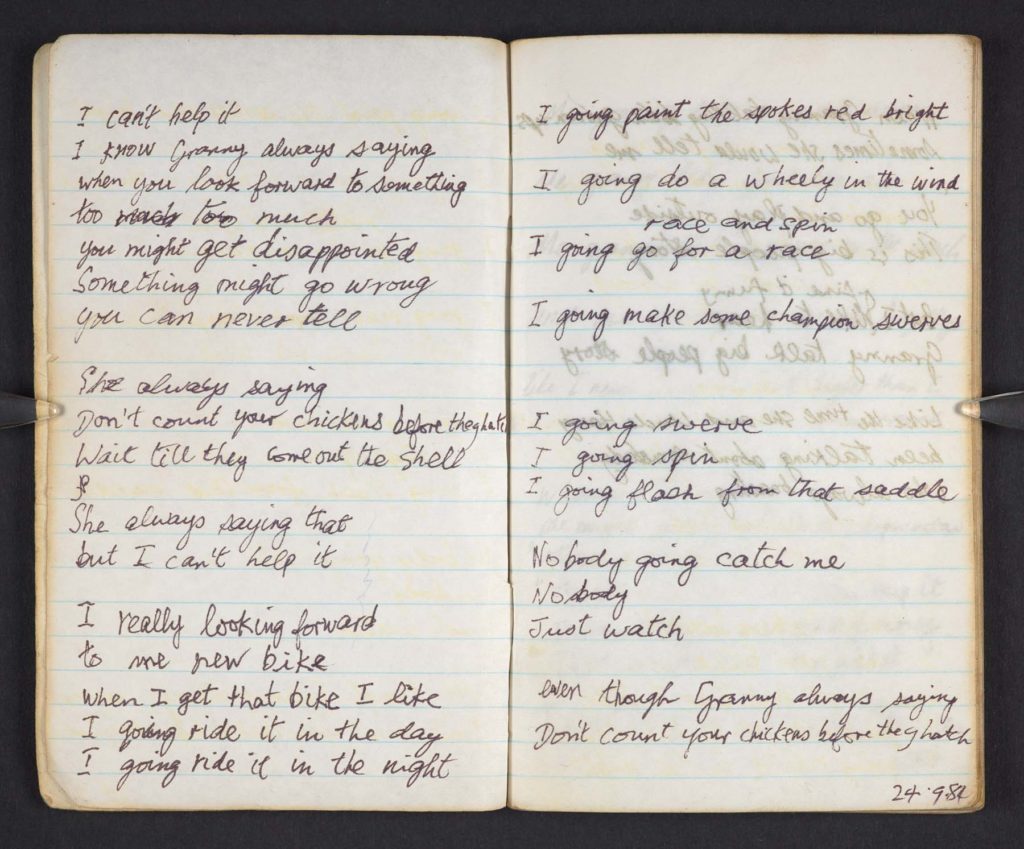 An insight into the mind of the famed Afro-Guyanese playwright, poet and children’s writer John Agard, this handwritten notebook offers some clue as to how he deftly combines issues of identity and ethnicity with acute social observation and humour.

An acknowledged master of capturing the speech patterns of people from the Caribbean, Agard’s notebook includes draft works of his children’s book collection of twenty poems ‘Say it Again Granny’ inspired by or based on Caribbean proverbs, such as “The older the violin the sweeter the tune” and “A bad dancer mustn’t blame the floor.” Apparently off the cuff, without too many alterations, here’s evidence of an innate rhythm and love of oral storytelling.

Find out more at www.bl.uk/collection-items/poems-by-john-agard-notebook-drafts-and-a-copy-of-say-it-again-granny 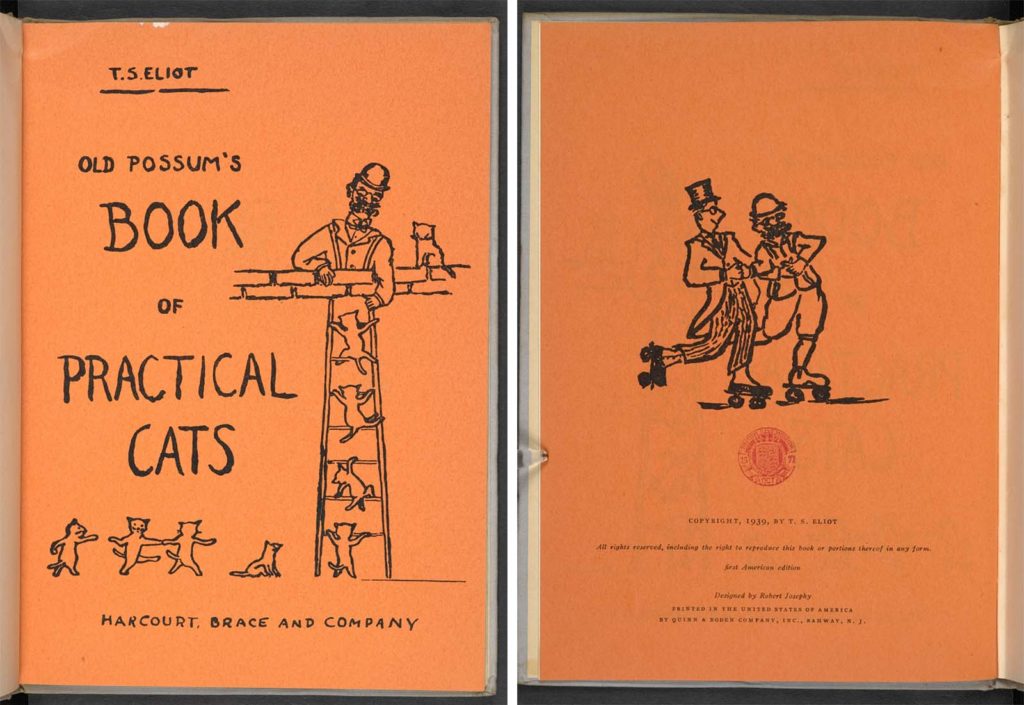 The cover of the 1939 edition of TS Eliot’s Old Possum’s Book of Practical Cats features a drawing by Eliot himself, who not only left behind his dense modernist poetics for this book of whimsical sketches of cats, but also inspired Andrew Lloyd Webber’s eponymous musical. Just don’t mention the movie…

Find out more at www.bl.uk/collection-items/old-possums-book-of-practical-cats-by-t-s-eliot 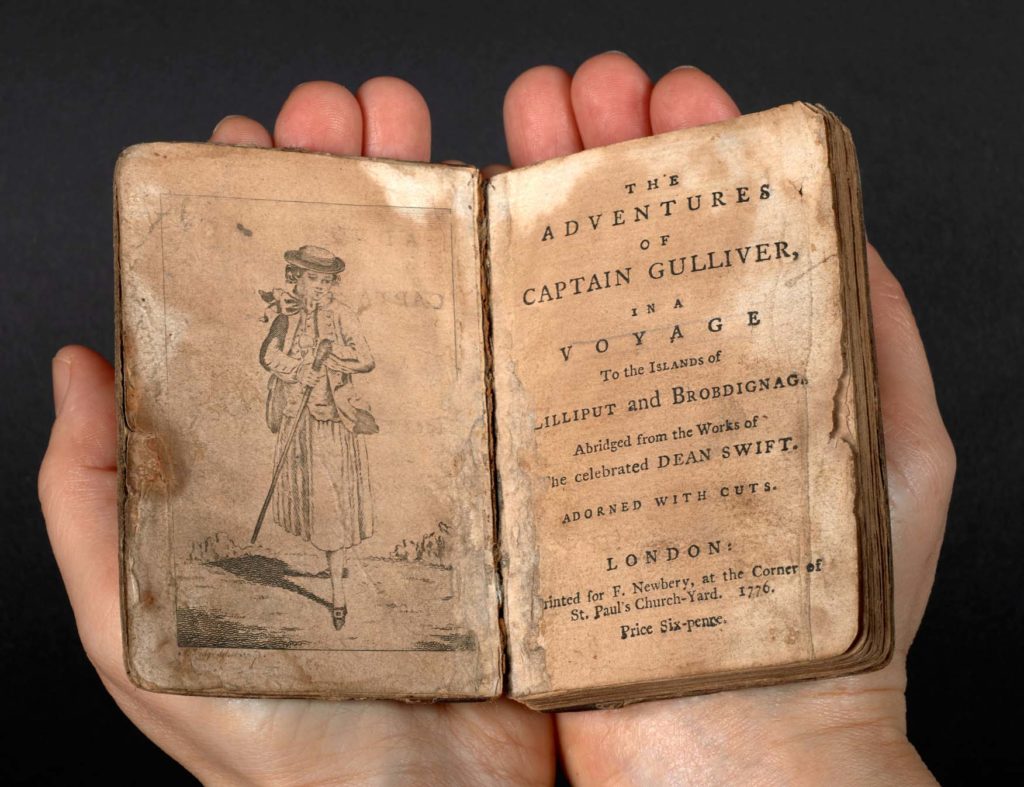 The adventures of Captain Gulliver, in a voyage to the islands of Lilliput and Brobdignag. Abridged from the works of … Dean Swift. Adorned with cuts. 1776 London. Public Domain. Courtesy The British Library.

Lest we forget that Gulliver almost got himself eaten alive by a baby, attacked by rats, drowned by a toad and dropped from a great height by a monkey during his stay in the kingdom of Brobdingnag, this copiously illustrated 1776 children’s edition is full of lively pictures to remind us of these perils, together with a skilfully abridged text that no doubt thrilled young Georgian readers.

First published in 1726 the novel soon became popular with readers of all ages and this pocket-sized ‘chapbook’ is an early example of how novels were abridged and adapted for youngsters with the story focussing more on Gulliver’s adventures among the pint-sized Lilliputians and the giants of Brobdingnag than the later denser adventures of the original.

Find out more at www.bl.uk/collection-items/the-adventures-of-captain-gulliver 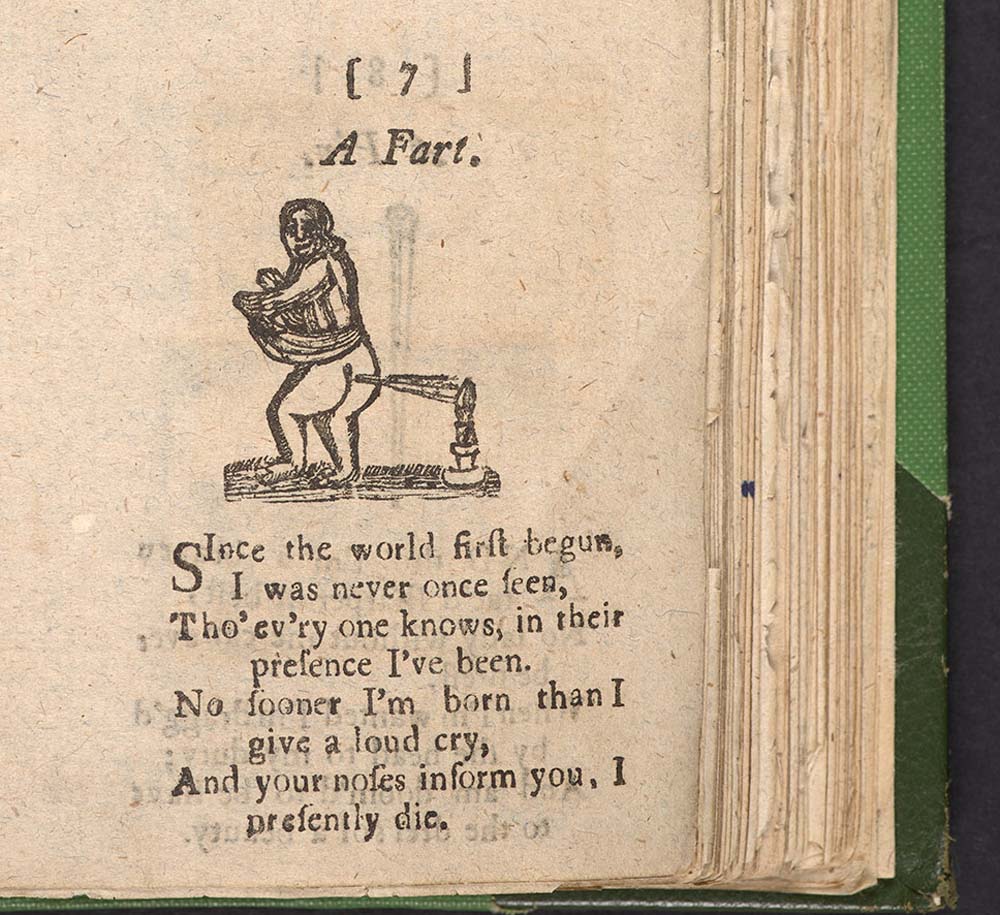 This charming little riddle about the transient qualities of a humble fart is found in the 1770 edition of the Child’s New Year’s Gift.

Another ‘chapbook’ this one is filled with riddles written for children based mainly on objects, which would normally have been found around the home, such as a kite, a pin or a pair of spectacles. Not only will this little book give you an insight into the content of the Georgian home, it will remind you of the enduring centuries-old nature of kids’ humour.

Find out more at www.bl.uk/collection-items/the-childs-new-years-gift 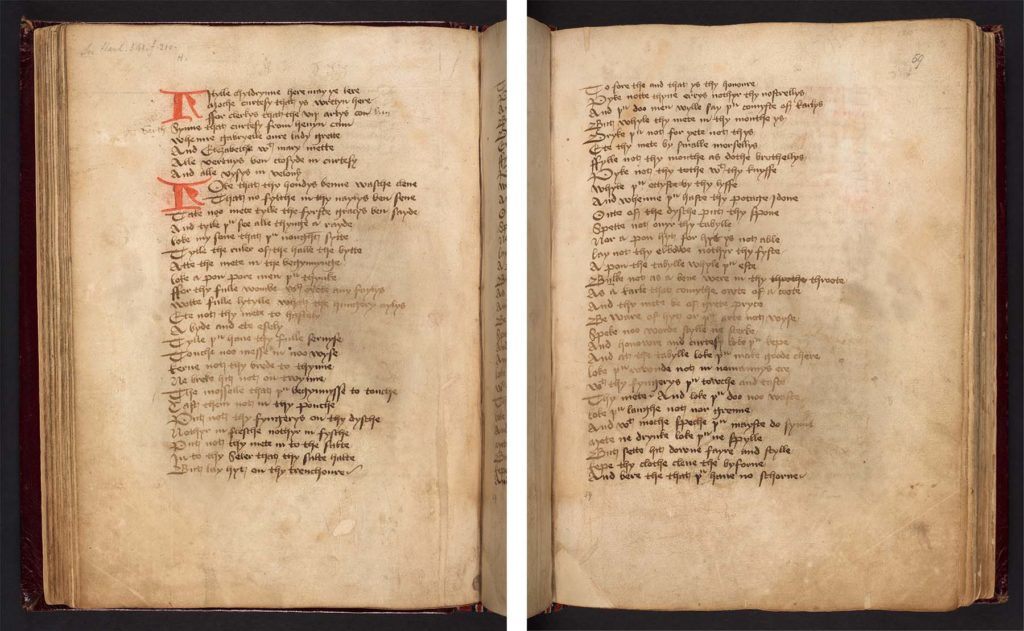 ‘Pyke notte thyne errys nothyr thy nostrellys’, which in modern parlance translates to don’t pick your ears or nose, is pretty good advice for behaving yourself around the medieval table. Other gems in this courtesy book written in Middle English and dating to around 1480 include Spette not ovyr thy tabylle’, which means Don’t spit over your table and ‘Bulle not as a bene were in thi throote’, which means don’t burp as if you had a bean in your throat.

A Goode rede for ye yonge knave, as they may have possibly said in medieval times.

Find out more at www.bl.uk/collection-items/the-lytille-childrenes-lytil-boke

How we lived then – Soviet style

Written in 1925, this Russian children’s book called Yesterday and Today, was penned by the children’s author Samuil Marshak and describes how a gas lamp, a candle, a milkmaid’s bucket yoke (or carrying pole) and an inkpot with a feather quill all feel annoyed when they see modern tools coming to replace them.

Filled with wonderful modernist illustrations, the Soviet era tale sees the abandoned implements chat in a dark corner and ask how anyone could possibly trust an electric lightbulb, water pipes and a typewriter to do their jobs. Sadly for them this is also the period of collectivisation and rapid industrialisation and from now on Uncle Jo Stalin would see to it that people would indeed use these new inventions.

Find out more at www.bl.uk/collection-items/yesterday-and-today-by-samuil-marshak 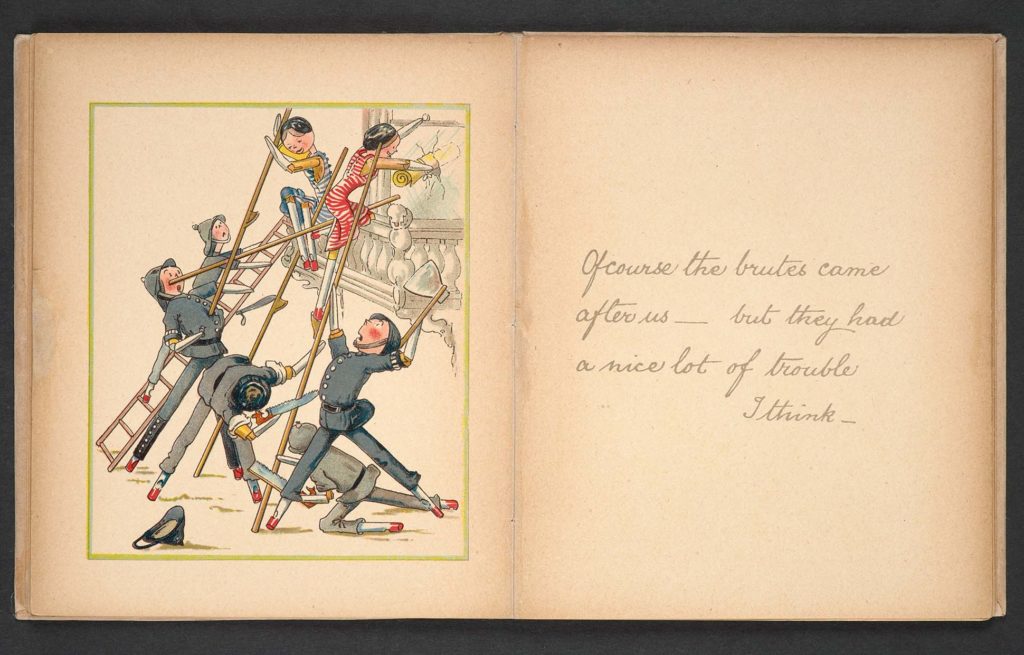 How many contemporary kids’ books tackled the issue of votes for women? Just this one.

Votes for Catharine Susan and Me by Kathleen Ainslie followed the adventures of two peg dolls swept up in the ‘Votes for Women’ campaign. Along the way they smash windows, battle peg doll policemen and even go on hunger strike while in prison – before quietly going home.

Find out more at www.bl.uk/collection-items/votes-for-catharine-susan-and-me-by-kathleen-ainslie

The British Library is the national library of the United Kingdom, and one of the world's greatest libraries. Set up in 1973, with galleries formerly in the British Museum building, it moved to its spectacular flagship new home at St Pancras in Central London in 1997. The John Ritblat Gallery:…