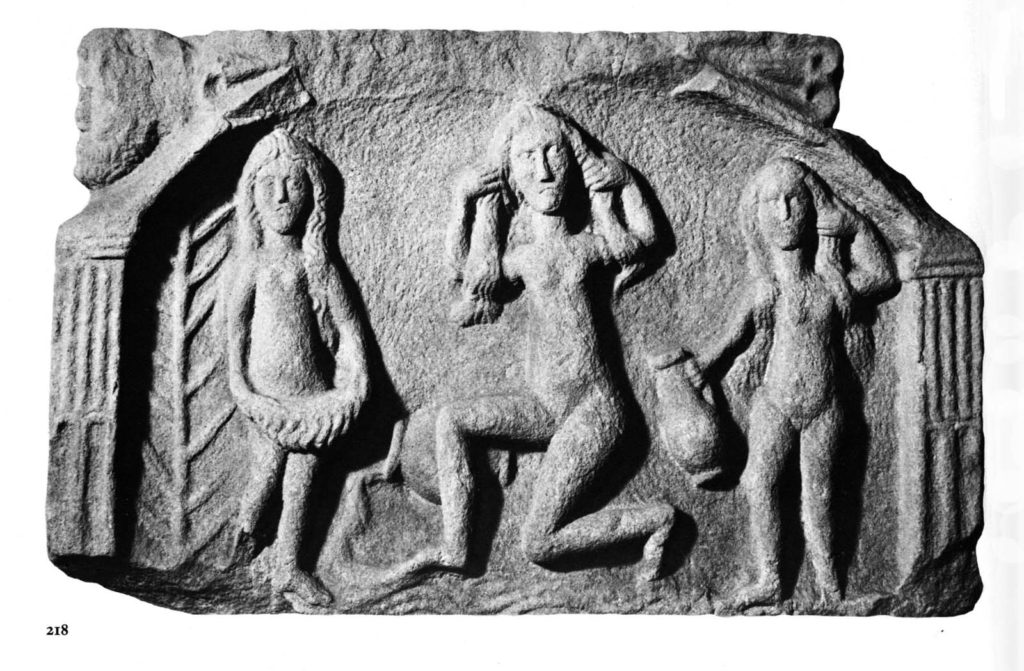 Courtly love, maternal love, Goddess love, doomed love – and a bit of cheekiness – all characterise the collections of museums and galleries on Tyneside

From Egyptian statues of Venus to delicate Victorian Valentines, these love stories span continents and generations.

Love among the tombstones 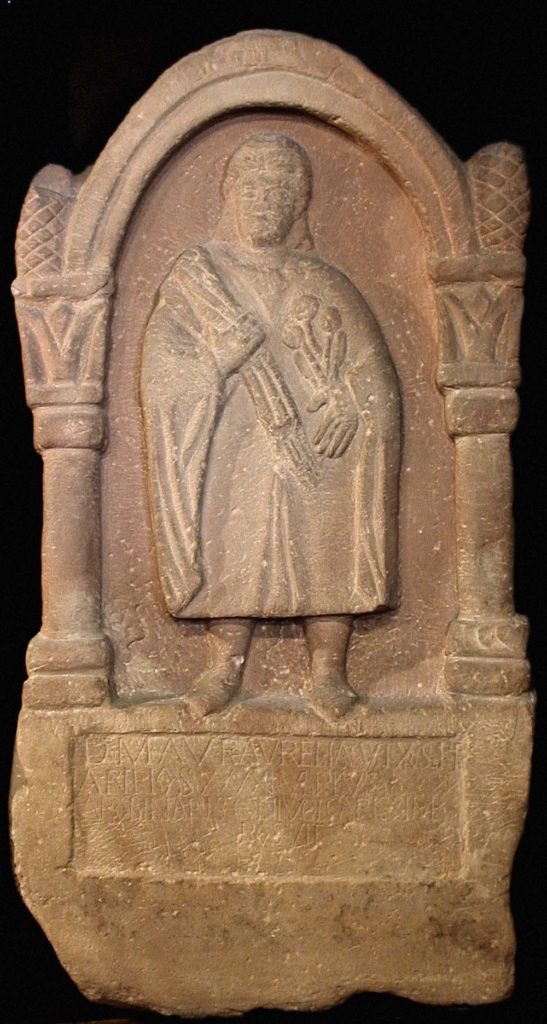 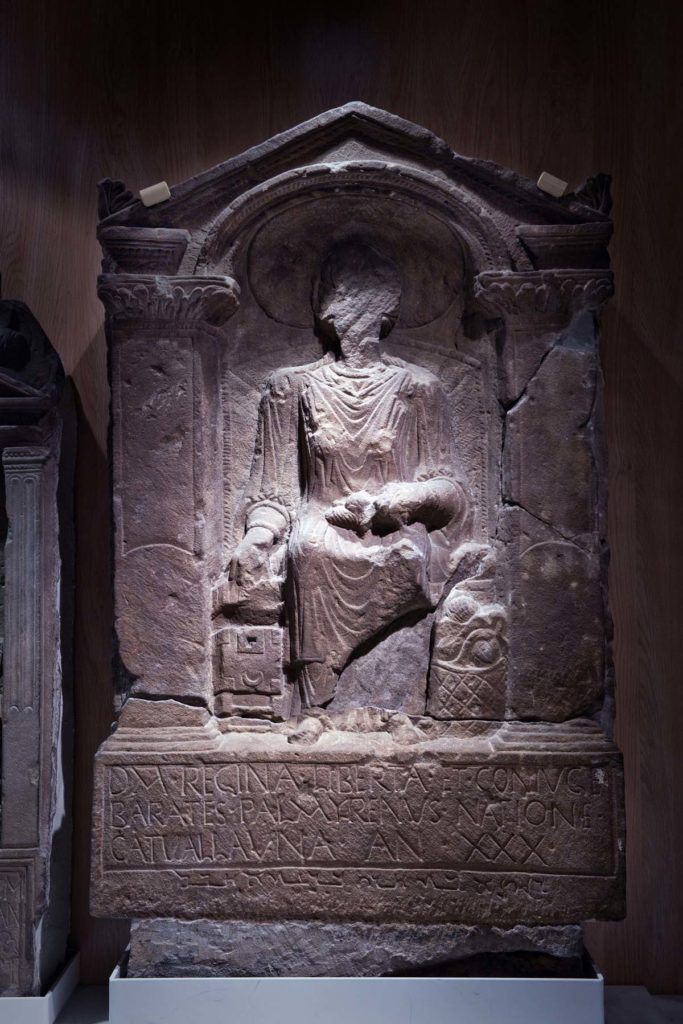 The Roman Ulpius Apolinaris honoured his very beloved wife with this elaborate third century tombstone, which was discovered in 1819 at the site of the Roman cemetery at Gallows Hill, south of Carlisle (Luguvalium).

His wife Aurelia is depicted with a full length Gallic cloak holding a bouquet of poppies, which are said to be emblematic of death. The inscription reads ‘To the spirits of the departed; Aurelia Aureliana, lived 41 years.’

One of the UK’s most significant Roman tombstones (a copy resides in the British Museum) is at Arbeia Roman fort in South Shields. The high-quality piece of stonework is dedicated to Regina, a former British slave who was freed by, then married to, her former owner Barates from Palmyra (Syria). Uniquely, it has inscriptions in both Latin and Aramaic – ‘Regina, freedwoman of Barates, alas.’ 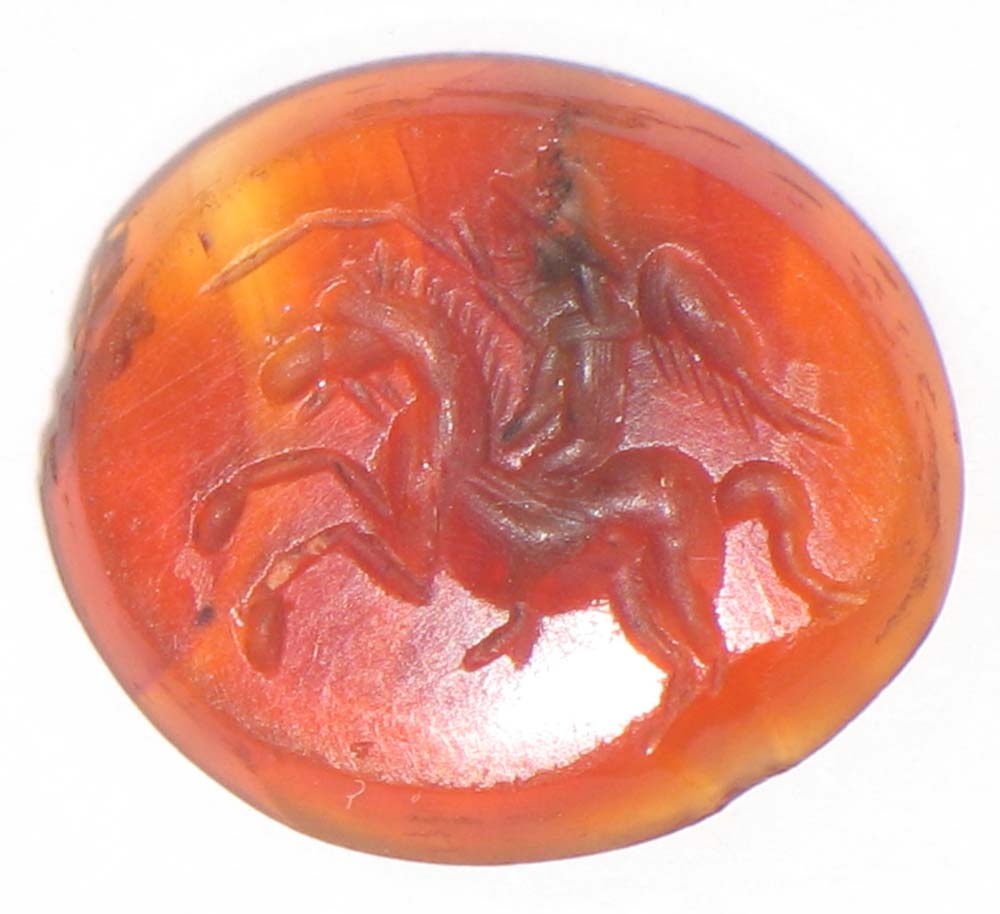 At Arbeia there is also an intricate Cupid intaglio (an engraved or incised figure in stone which yields an image in relief) that was found during Victorian excavations at the fort.

Cupid was the God of Love who could make people fall in love with each other and some Romans cynically said he was depicted as a young man with wings because love can be fast, foolish and irrational. The intaglio shows him riding a galloping horse, so perhaps this represents the speed and excitement of love?

A golden token of love 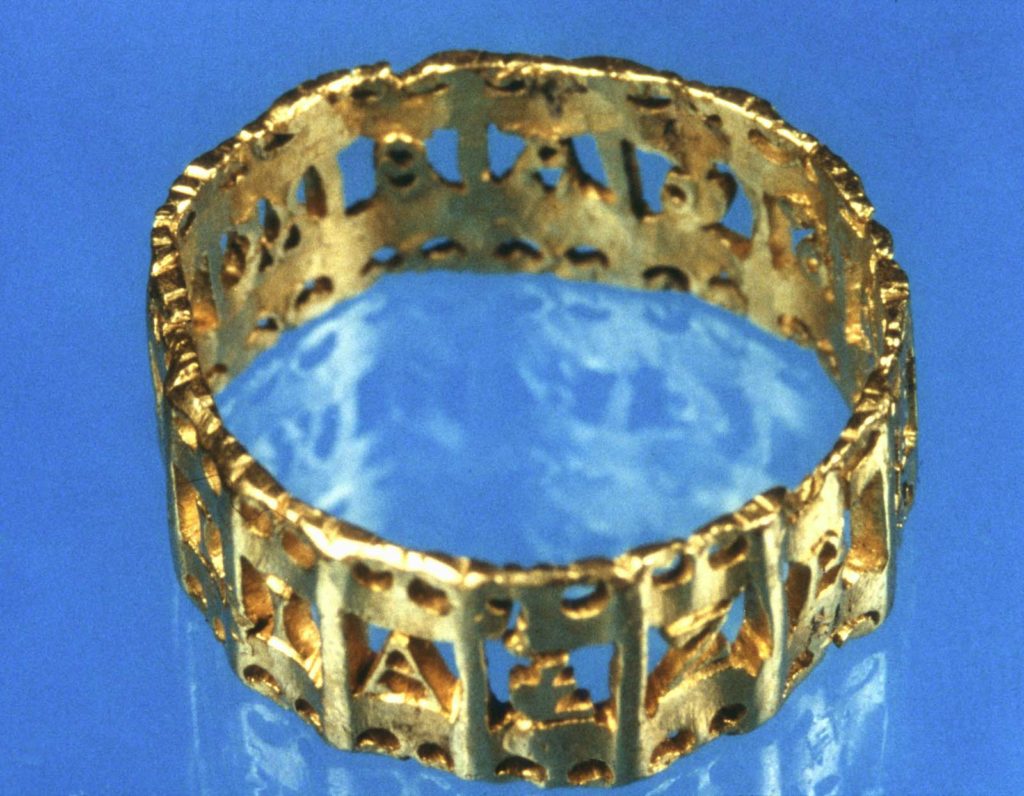 The well documented Roman legacy of Hadrian’s Wall in the North East is not just military in nature. This golden Aemilia finger ring, in the Great North Museum: Hancock, was found in Corbridge, Northumberland in 1840 by a man pulling turnips. Dating from the late second to the early third century AD, the rare gold ring is believed to have been a love token or betrothal gift.

Inscribed with the Greek motto AEMILIA ZESES – ‘Aemilia may you live’, it features upper and lower borders decorated with openwork leaf shapes arranged in pairs – an exquisite level of craftsmanship for the time. 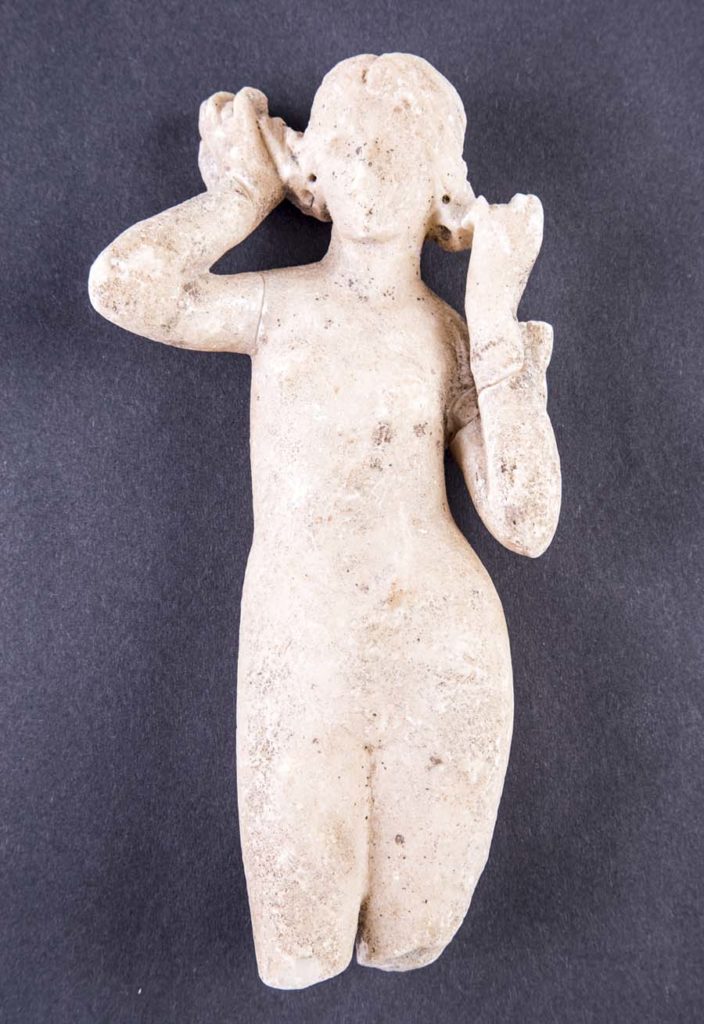 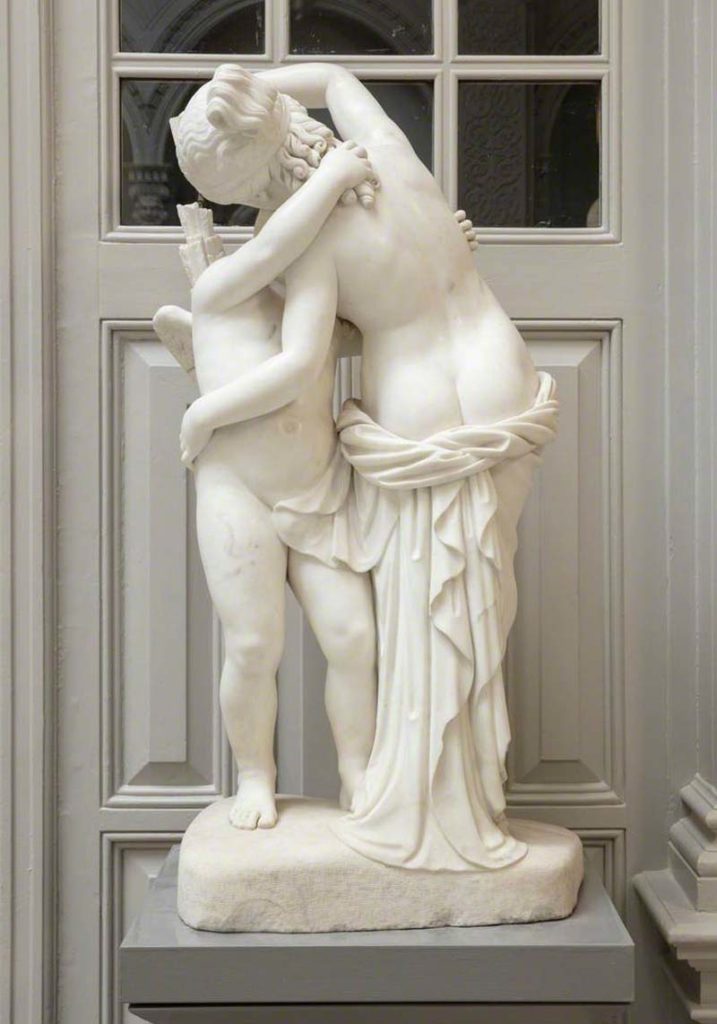 A famous Roman relief from a water tank found at High Rochester Roman Fort (Bremenium) shows Venus, the Goddess of Love, depicted in a style that some scholars say shows a distinctly British stylistic influence on classical art, bathing with two of her attendant nymphs. One holds a towel, the other a water jug.

Returning to Arbeia, a statue from Egypt, shows Venus, the Goddess of Love and Beauty. During a festival in honour of the Goddess Venus in Rome, women would offer flowers including roses and myrtle (a symbol of everlasting love), in return for popularity, beauty, charm and wit.

Centuries later and the classical gods of love still held sway over artists, like the North East Victorian sculptor John Graham Lough (1798 – 1876), who was responsible for the iconic Stephenson monument at Newcastle Central Station. After a series of trials, Cupid, the God of Love, and Psyche, were married in heaven and this love story from classical mythology is immortalised in his marble sculpture at Newcastle University’s Hatton Gallery.

The piece can usually be seen on display in the gallery building’s atrium, along with three other examples of John Graham Lough’s work, all donated by the Duke of Northumberland in 1953. 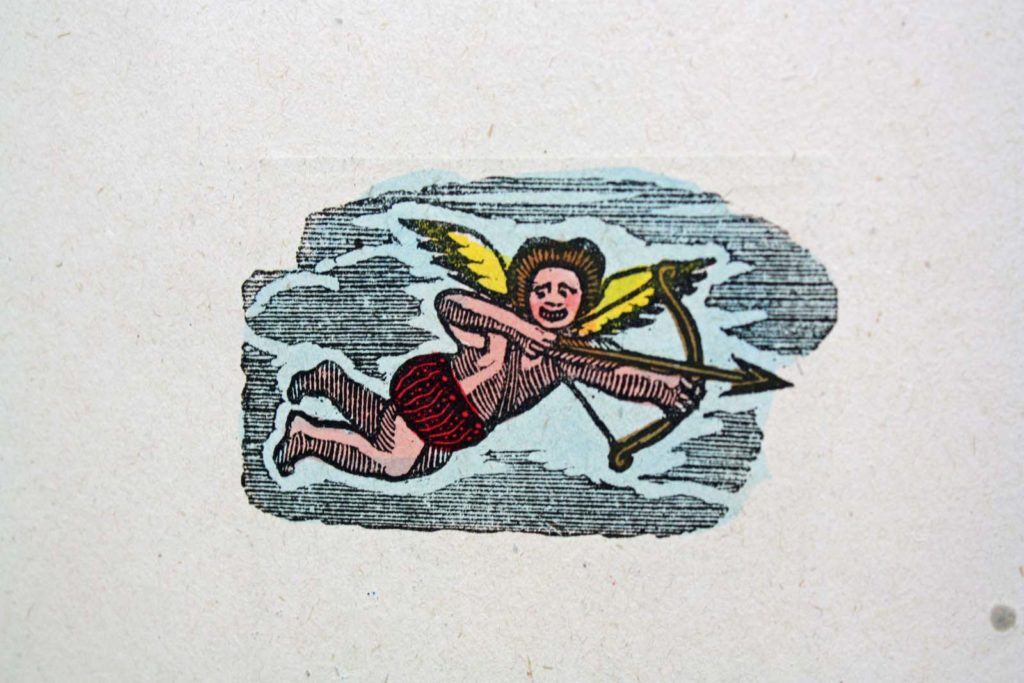 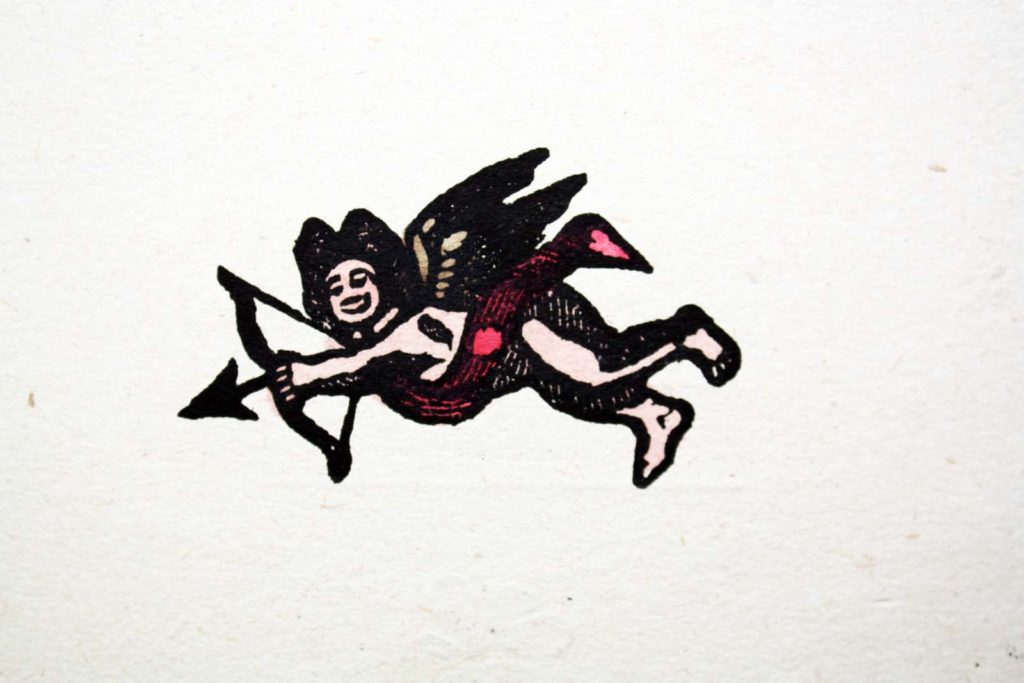 Joseph Crawhall’s (1821 – 1896) ‘Ffrendes With Newe Faces’ are a series of chapbooks in the collection of the Great North Museum: Hancock Library and with their colourful illustrations they offer a light hearted view of love from the early Victorian era.

Crawhall was born in Newcastle to an established political and artistic family and his chapbooks were among the many paper covered booklets that were produced cheaply and considered low brow, but are now invaluable as social histories and folk literature. 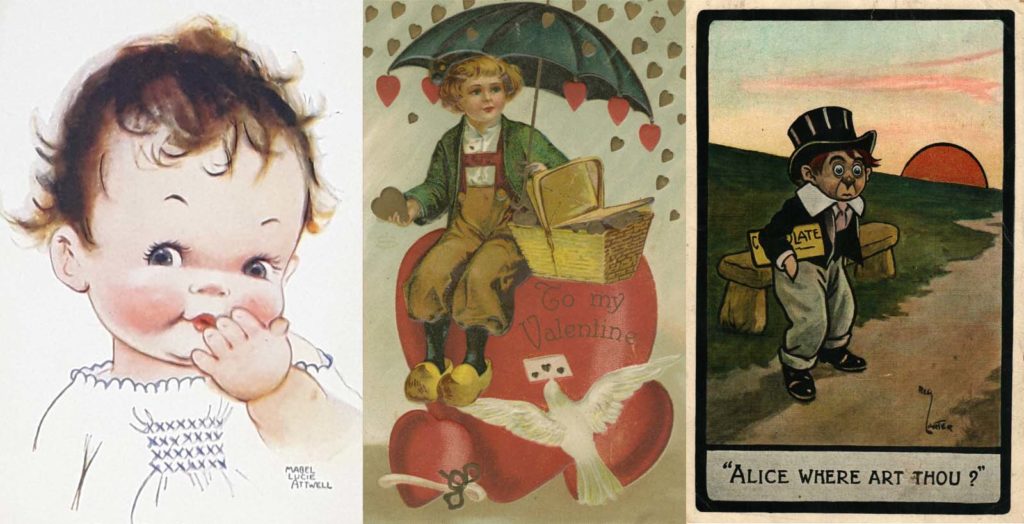 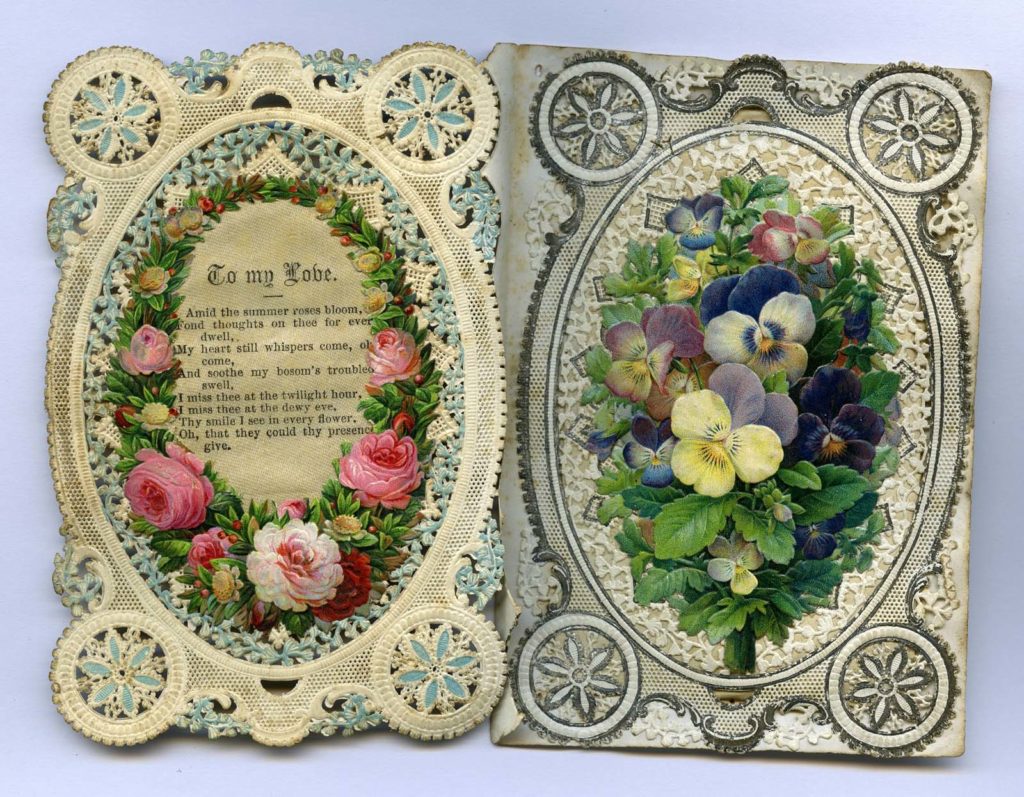 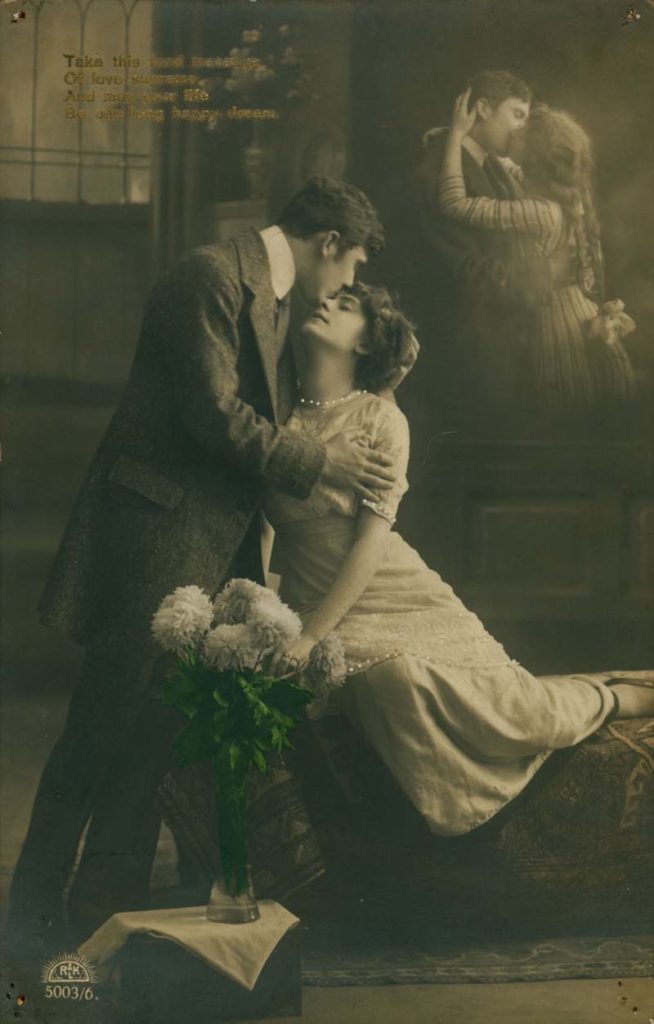 In the pre-digital age, postcards gave an insight to people, places and events, documenting landscape, the fashions, and the way we lived. They also give us a fascinating glimpse into people’s lives.

A postcard in Tyne & Wear Archives, however, shows a racy side to the Edwardians. This postcard, sent to Mr G Sowerby of 24 Simpson St, Felling-on-Tyne in 1912, ends with “Annie xxxxxxxxxxx. How does this card suit? It’s rather nice isn’t it. Bow wow”. 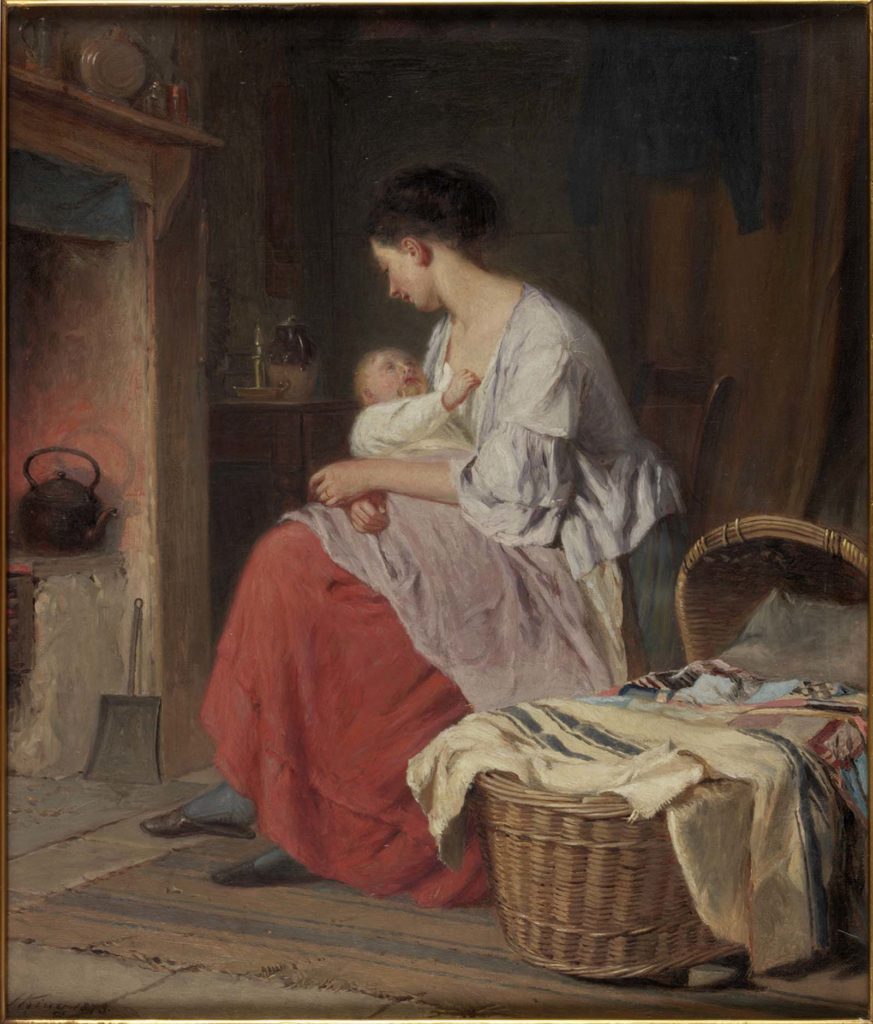 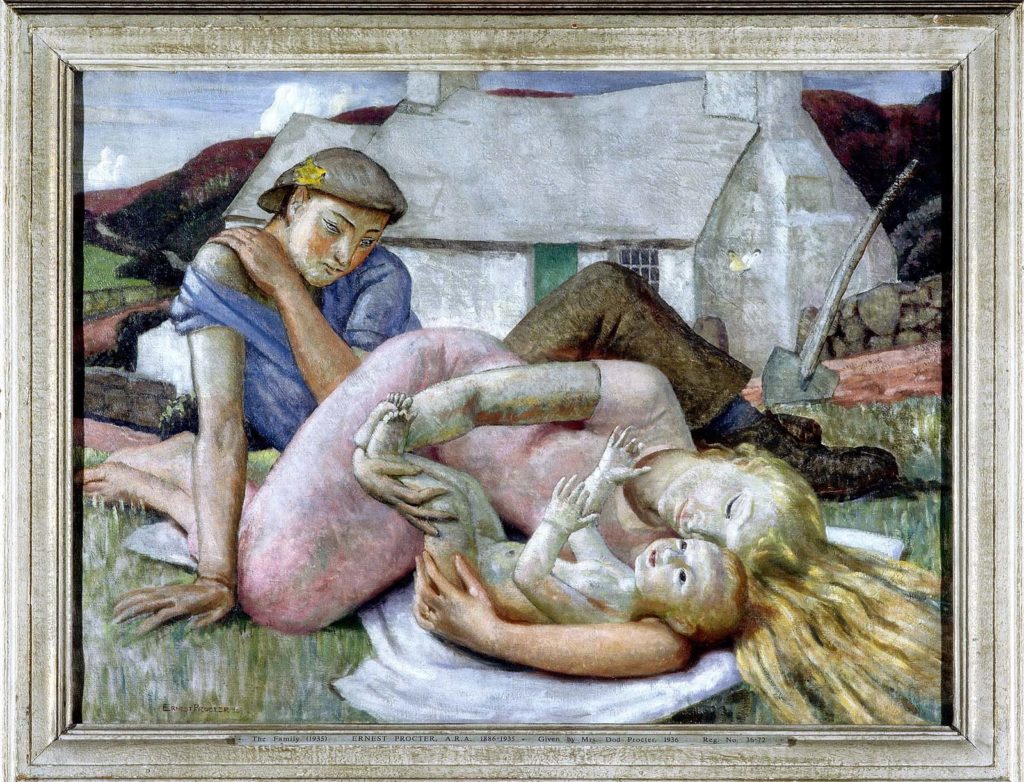 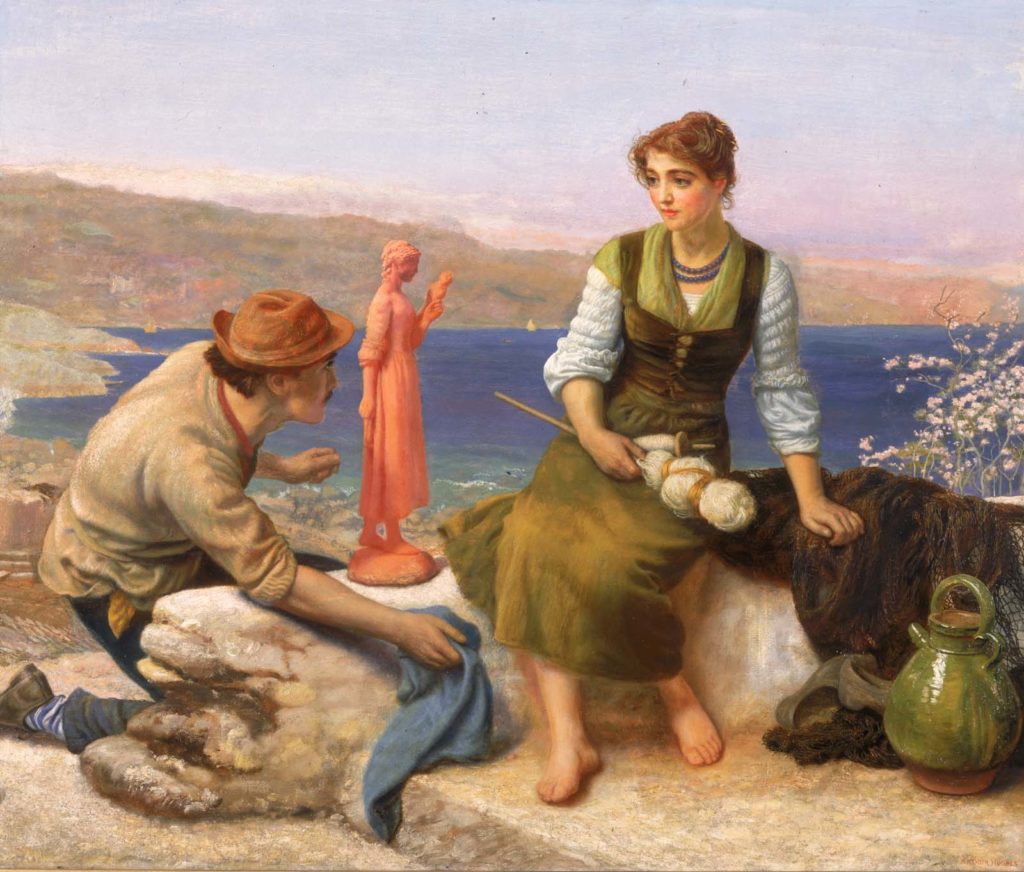 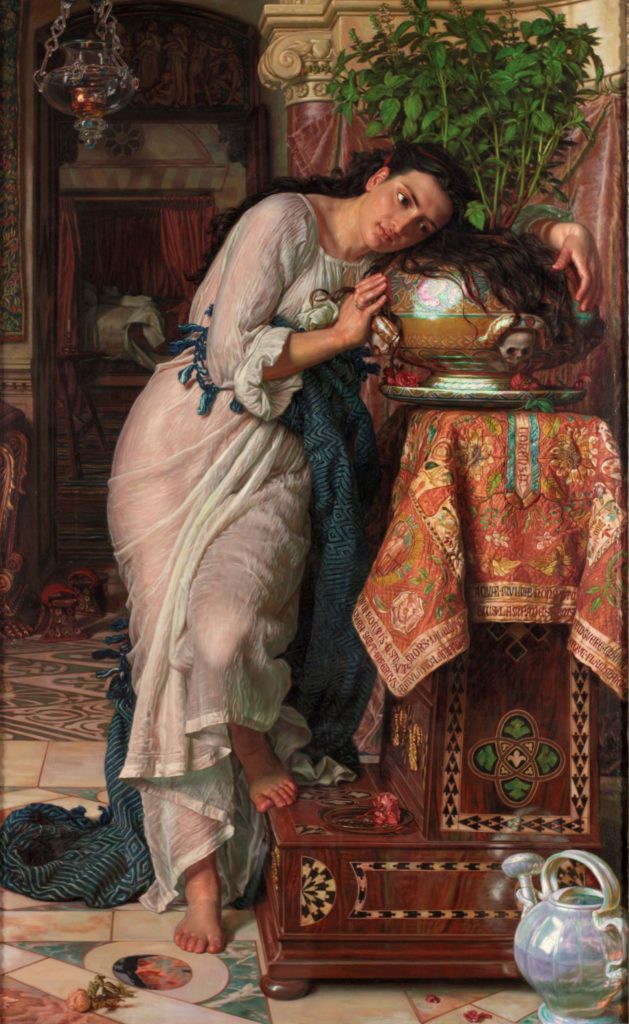 At Newcastle’s Laing Art Gallery, we see traditional notions of maternal and familial love; Mother and Child, 1873, by Haynes King (1831-1904) which emphasises the importance of family life and depicts the young mother gazing lovingly at her new baby.

The Family (1935), by Tynemouth born Ernest Procter (1886-1935), also shows the love and closeness of the family but this time with the mother, baby and father. Many paintings only show a mother and child, but in this Newlyn School-inspired painting of the 1930s,  the father takes his place in a painting that combines modernism and an idealised version of love and rural living.

Traditional courtly love is depicted in The Potter’s Courtship (1886), by the later Pre-Raphaelite Arthur Hughes (1832-1915). The potter has made a statue of the woman he loves – he’s nervous, but the young woman’s face shows she’s is touched by his efforts.

By contrast, one of the most famous and well-loved paintings in the region, is William Holman Hunt’s (1827 – 1910) Isabella and the Pot of Basil, which hangs in the Laing Art Gallery, and can be seen reproduced on the gallery’s outside wall. Like many other Pre-Raphaelite paintings it is inspired by the John Keats poem, Isabella, who is depicted at her shrine to her murdered lover, Lorenzo. She obsessively holds the pot of basil, which contains his severed head.

Buttons and badges have a long history of promoting causes and expressing points of view and in the collections of Newcastle’s Discovery Museum this ‘Gay Love’ button badge is one of many in the collection that represents the LGBTQIA community, the modern gay rights movement – and how popular opinions and representations of love still need to evolve.

Tyne & Wear Archives & Museums (TWAM) is appealing to people who love culture and who are missing their museums and galleries to support them. From only £2 per month, a regular donation will help to keep art, culture and heritage at the heart of the North East. See www.twmuseums.org.uk/valentine