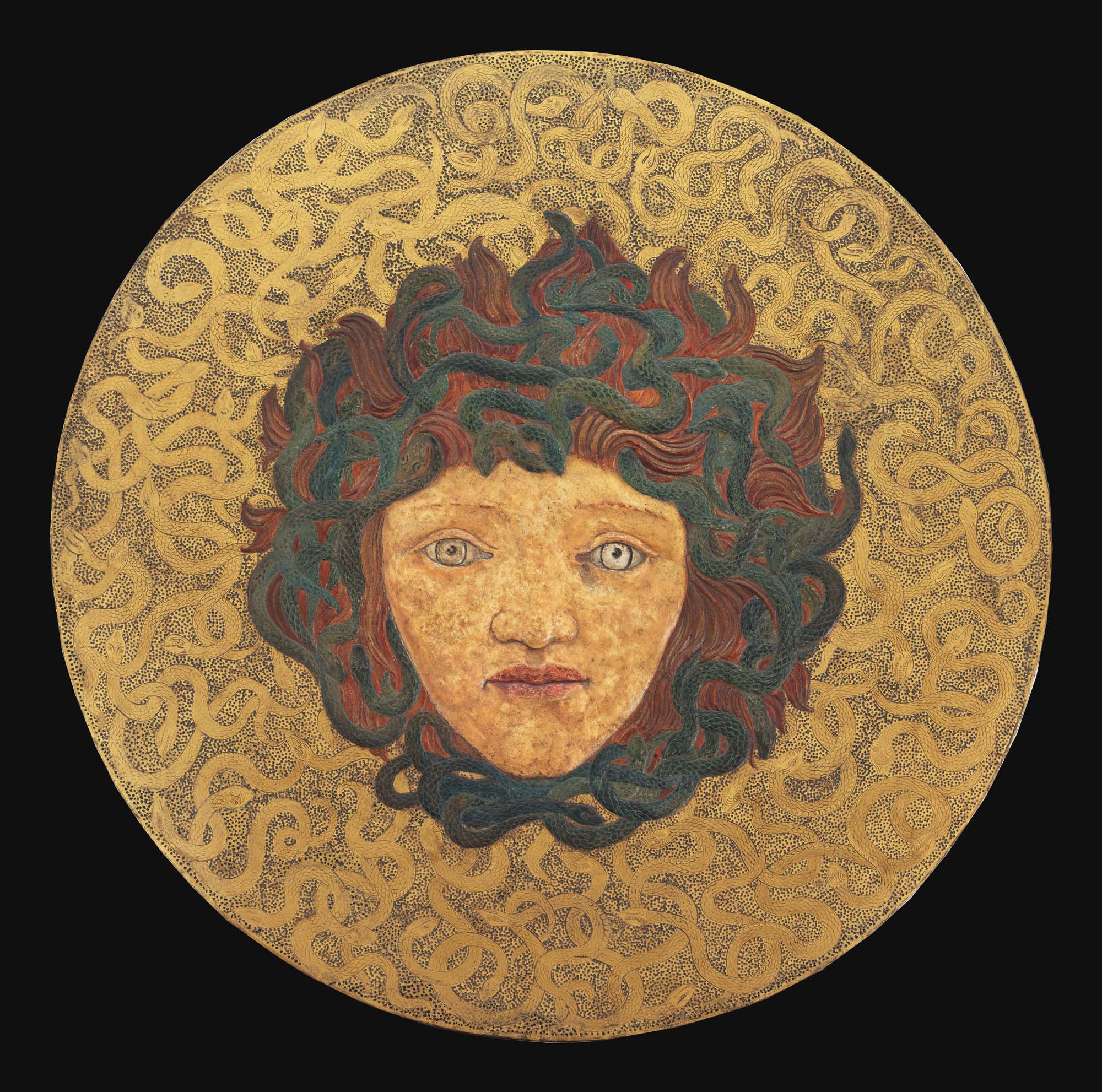 The De Morgan Foundation has been on quite a journey; their museum in Wandsworth, which used to house a significant holding of works by the painter and radical feminist Evelyn De Morgan (1855 – 1919) and her husband, Arts and Crafts ceramicist William De Morgan (1839 – 1917), closed its doors to the public in 2014.

At the time it seemed to some that a remarkable and unified collection, originally gathered by Evelyn’s sister Wilhelmina, may fade into obscurity.

But rather than sounding the death knell for the 70 oil paintings, 1000 ceramics and a significant archive of drawings, sketches and other materials, the closure sparked a kind of rebirth that today means more people than ever now see and experience the paintings and ceramics produced by the powerhouse fin de siècle pair.

Together the De Morgans represent one of the most persuasive late Victorian / Edwardian artistic duos with a combined output that not only straddled the worlds of pottery and painting but also offered a heady cocktail of Pre-Raphaelitism, Aestheticism, Arts and Crafts, Orientalism as well as feminism, spiritualism and the rejection of material wealth in favour of spiritual enlightenment and pacifism. 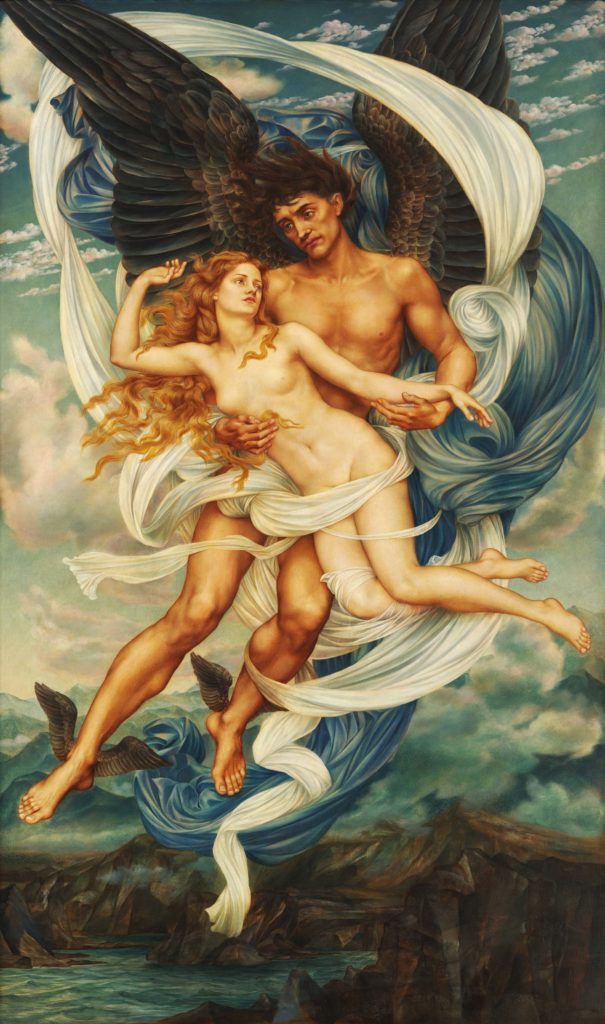 Yet within these shared ideals Evelyn’s meaningful Spiritualist pictures differ greatly from William’s purely decorative appropriation of global culture and aesthetics. And while they jointly became interested in and involved with many of the social issues of their day, some of which have resonances in today’s world, each continued to practise their own distinct work.

Today the De Morgan Foundation explores these varied ideas and outputs via a series of evolving exhibitions at three partner museums; Watts Gallery in Surrey, Cannon Hall in Barnsley and Wightwick Manor in Wolverhampton – each of which offer a range of apposite settings for art and ideas but which also combine to eclipse the visitor numbers of the old museum in Wandsworth.

“We used to get about 3,000 visitors a year in Wandsworth, so it really wasn’t an ideal location,” says the Foundation’s Curator-Manager Sarah Hardy. “Compare that now with the nearly 400,000 that see the collection across our three partner sites and our touring exhibitions. So it really is better to share.”

Hardy is the Foundation’s sole employee and divides her precious time between caring for the collection, overseeing the curation and loans and raising funds to keep it afloat but she recently oversaw the launch of a new De Morgan website, www.demorgan.org.uk and a new online exhibition with Google Arts and Culture, both of which are bringing the sumptuous swirls and Arts and Crafts stylings of the pair to a wider audience online.

The only flip side, says Hardy, is that historically “the collection was always in Chelsea, Fulham and Battersea, where the De Morgans lived and worked and where the founder of the collection, Wilhelmina Stirling, was based”.

“It was her collection, she just fought tirelessly and thankfully had the time and the money to do it,” she adds. “She would go round and collect as much De Morgan artwork as she could get her hands on.”

The author of more than 30 publications of fiction and biography, Wilhelmina was Evelyn De Morgan’s younger sister by ten years and outlived her by nearly 46, during which she made it her life’s work to collect as much of her sister and brother-in-law’s artwork as she could with the vision of creating a national De Morgan Collection.

Upon her death in 1965, the De Morgan Foundation was formed with the duty of caring for her impressive collection.
“What you’ve got to remember is she was collecting in the 1920s, 30s and 40s when it really wasn’t particularly popular stuff,” says Hardy. “It wasn’t revered in the way that we might look at it now, but we have these wonderful letters in the archive where she just offers to buy any De Morgan painting that anybody has got.

“She brings it back to her house in Battersea, gets professional conservators in to look at it, really wants to make sure that it is cared for and looked after and that shows in the quality of the paintings that we still have today.” 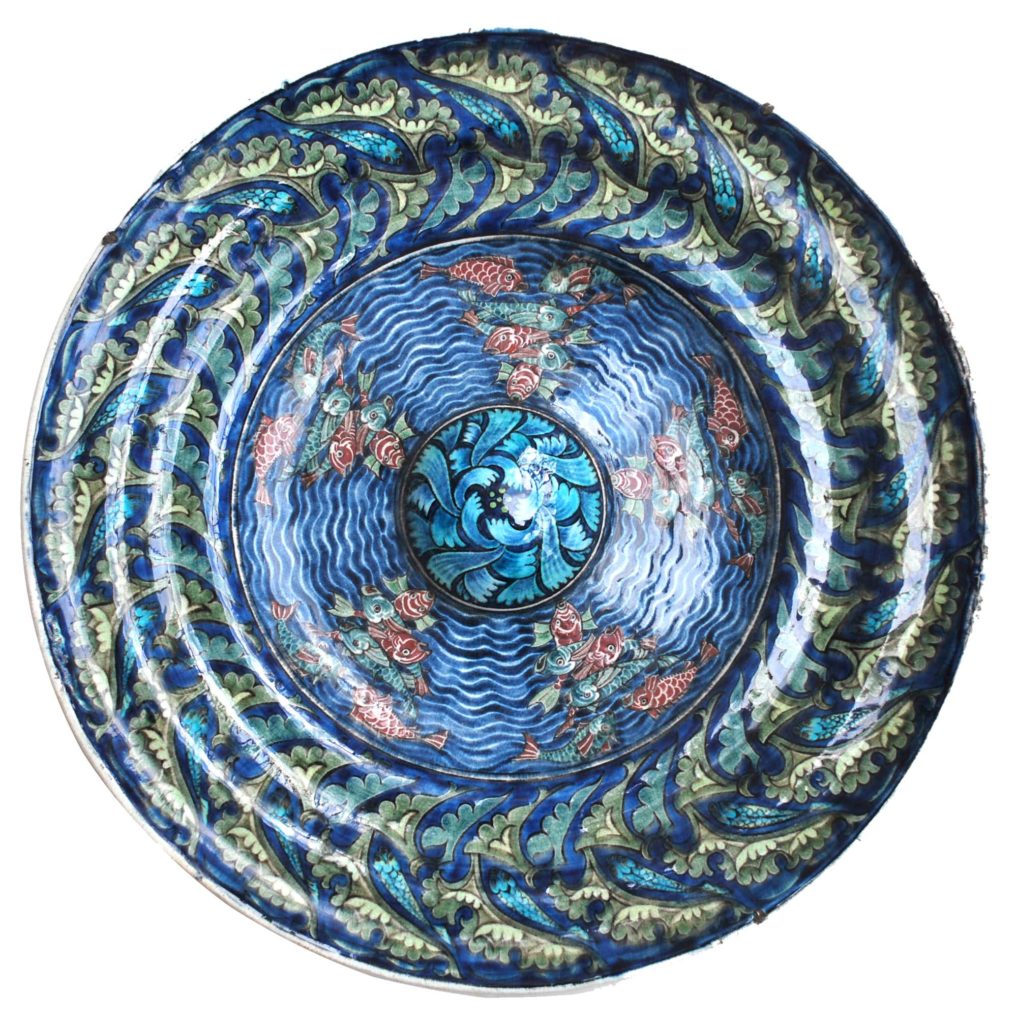 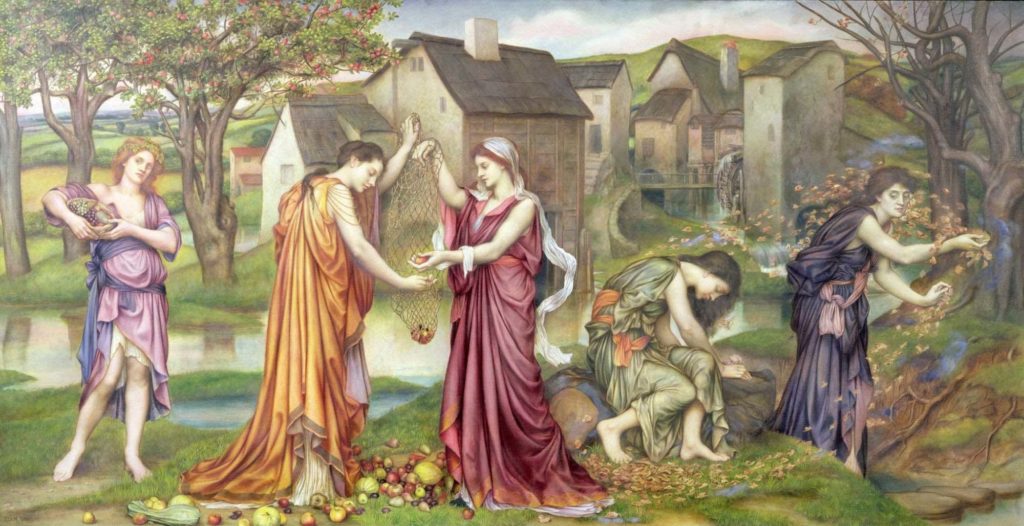 Wilhelmina also managed to persuade Battersea Council to give her a sixteenth century manor house on a peppercorn rent, but sadly she never got round to buying it.

“That was the only flaw in Wilhelmina’s plan,” says Hardy, “that she unable to keep the house, so we’ve never had a museum there.”

Yet it is thanks to Wilhelmina, the keeper of the De Morgan flame, that we can delve deeper into their world.

“There are just so many different aspects of these artists’ works that have never been looked at but I think the ceramics are best understood as being by William and the paintings by Evelyn,” explains Hardy. “Yes, they were married and yes, there was definitely a collaboration of ideas and spirits there but really they fit into completely different schools and I’d like to keep them separate.”

At the Watts Gallery, the home of the painter George Frederic Watts (1817 – 1904), the focus has been on the work of Evelyn De Morgan who was greatly inspired by Watts and visited the Watts’s family and artist’s studio home regularly.

“Mary Watts’s diary says they’d sit and talk about how man would be bettered if he gave up his expression of materialism and looked to spirituality instead, so we have her pictures there that celebrate that.

“Anyone who knows Evelyn De Morgan’s early works knows they are stylistically similar to paintings of the Aesthetic Movement, with draped figures in dreamlike landscapes. She later evolved to more of a Pre-Raphaelite style, in order that her pictures remained commercially successful. But I think she’s much better understood as not being a pre-Raphaelite artist. She really was quite clever in that before 1900 when she was working to commission and to sell her pictures she kept within the aesthetic boundaries and guidelines of particular movements that were popular at the time.

“In the very early pictures you get these beautiful aesthetic pieces like Ariadne and Axis, Cadmus and Harmonia and then there are the pictures that did the rounds at the New Gallery, the Grosvenor Gallery and the Dudley Gallery before that, of beach scenes with scantily clad very classical looking women.” 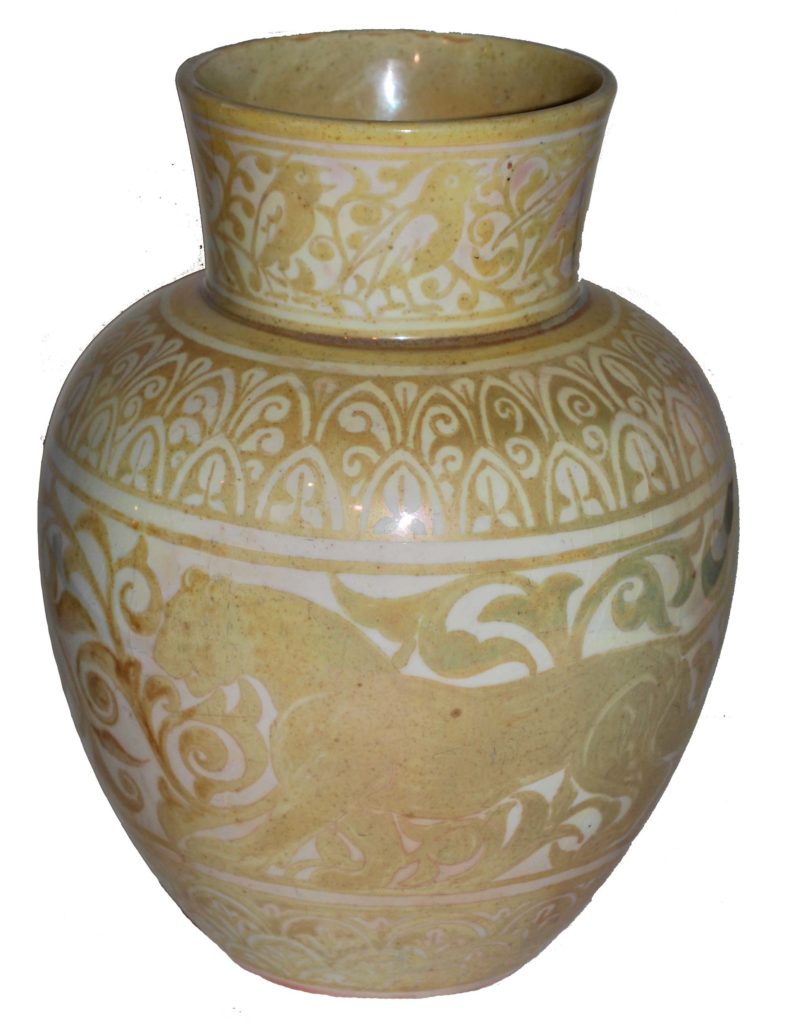 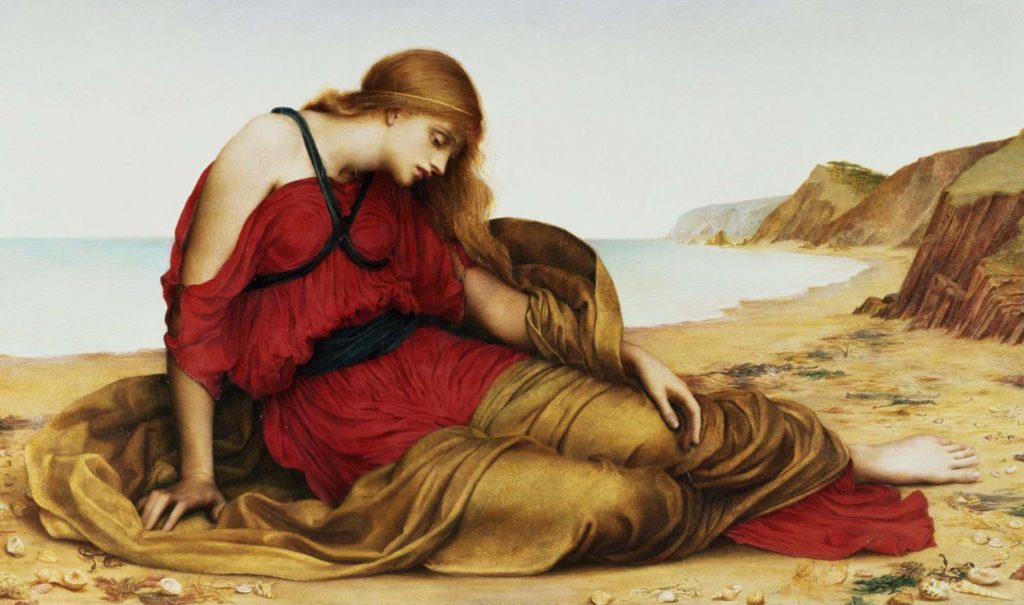 Later when she became freed from the financial constraints of having to create art that would sell Evelyn started to explore art that was suffused with a greater political purpose and, as the 20th century progressed, she started to paint war pictures, pacifist paintings and the real odes to symbolism.

Around this time, an interest in spiritualism and resurrection, the emancipation of the soul on the death of the body, led to her later ‘swirling mist’ paintings.

“I always refer to them as the ‘candyfloss’ pictures,” says Hardy, “it goes right back to the biblical use of the rainbow as a symbol of peace and hope after the deluge, I think for Evelyn it was this idea of eventual peace for the soul after the death of the body.”

“William’s artwork is a complete hotchpotch of cultural signifiers that might have meant something to someone once upon a time, but unlike Evelyn he’s seeing them purely as decorative,” says Hardy, “so you get these beautiful Islamic shapes, Persian leaves and carnations that are from Syrian and Isnik art in Turkey.

“It’s a pulling together of everything to make something that is uniquely De Morgan because he was really interested in design and shape and the beauty of things, rather than symbolism.”

But while Evelyn’s paintings continued to sell, the change in taste in decorative art towards Art Nouveau saw William’s Arts and Crafts ceramics company eventually go out of business and he turned his artistic talents to writing a series of highly popular novels. By the time of his death in 1917 these works of fiction had even eclipsed his work as a potter. Today the ceramic work has in turn eclipsed the Edwardian novels.

So it is left to the De Morgan Foundation to continue telling this interweaving story of partnership and individual creativity via ever evolving ways.

At Cannon Hall in Barnsley, A Family of Artists showcases important paintings Evelyn De Morgan made between 1883 and 1884 in West Yorkshire working closely with her uncle, the Pre-Raphaelite artist John Roddam Spencer-Stanhope.

The two artists shared ideas and decorated the local churches with murals, organ panels and Morris & Co stained glass. It was perhaps through these connections that Evelyn met William De Morgan in 1884, introducing another artist to the family.

At the Watts Gallery in Surrey Decoration or Devotion? compares the routes of design and of devotion taken by each artist and explores how their politics unified them while in their art they parted ways. A new exhibition at Wightwick Manor, which boasts a classic aesthetic interior fuelled by the Mander family’s passion for collecting Victorian art and design, delves into the vast archive of preparatory drawings and sketches by William and Evelyn De Morgan to Look Beneath the Lustre of the De Morgans’ beautiful creations. 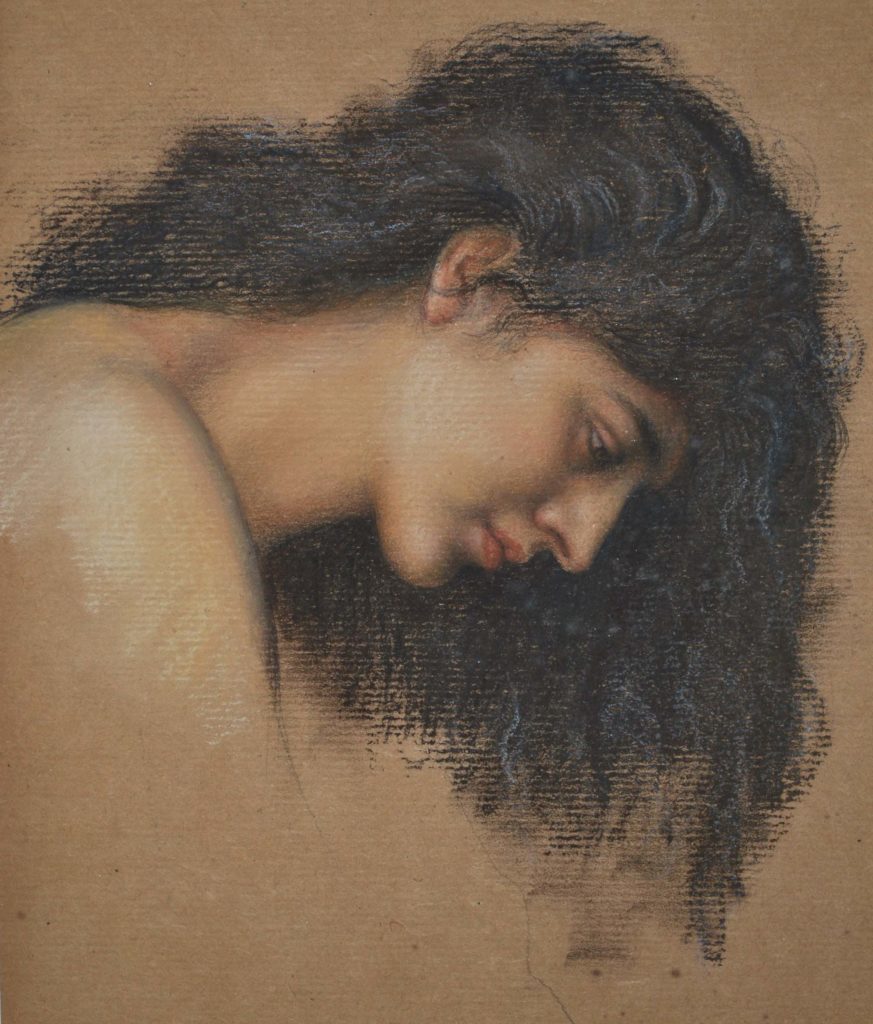 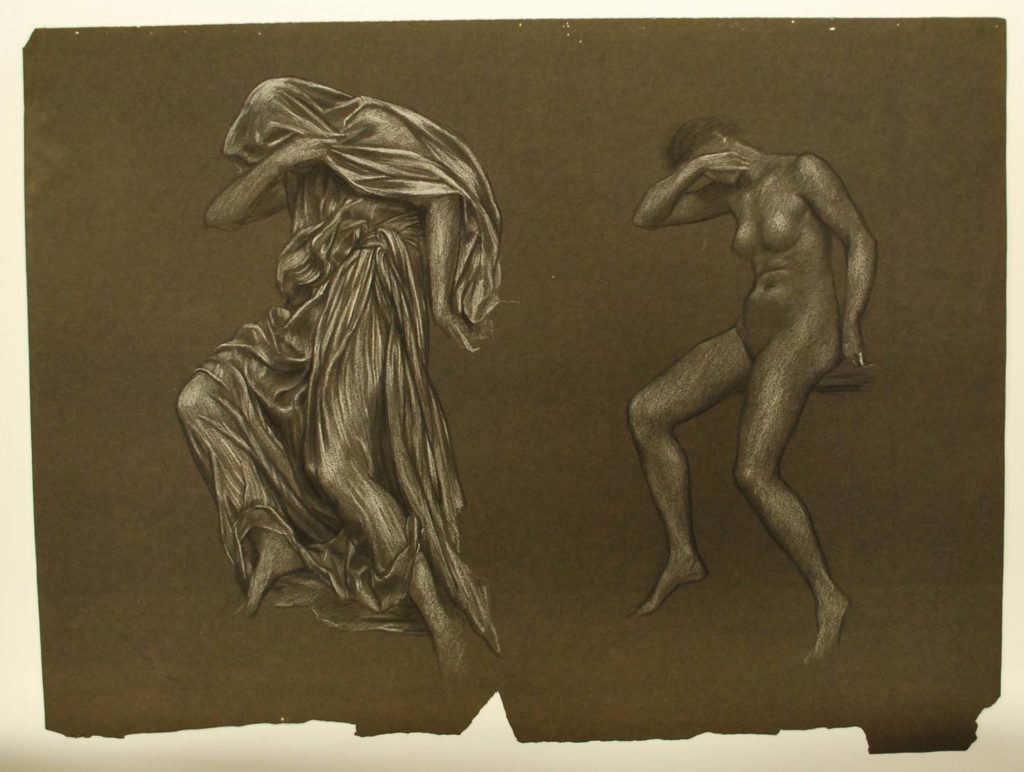 Study of a draped and nude figure for the Storm Spirits, 1900. By Evelyn De Morgan Wightwick Manor © De Morgan Foundation

“In terms of sharing the collection and the number of people who get to see the artwork it’s just been transformative, “ adds Hardy “but we need to be then converting these people into friends and supporters to enable us to keep it going.”
The Foundation currently runs at a deficit every year and desperately needs donations and purchases from its new online shop to keep going. In the meantime they look to the future with ambitions to even open a fourth partner site.

“If that afforded us a space back in London where the art is from, then that would be amazing. It is something that we’re thinking about very long term, but there’s still so much more that we could do, definitely in terms of research, as it’s such an underworked collection.”