With collections spanning natural history, archaeology and ethnography from across the globe, what better place to take a virtual trip around the world from the comfort of your home 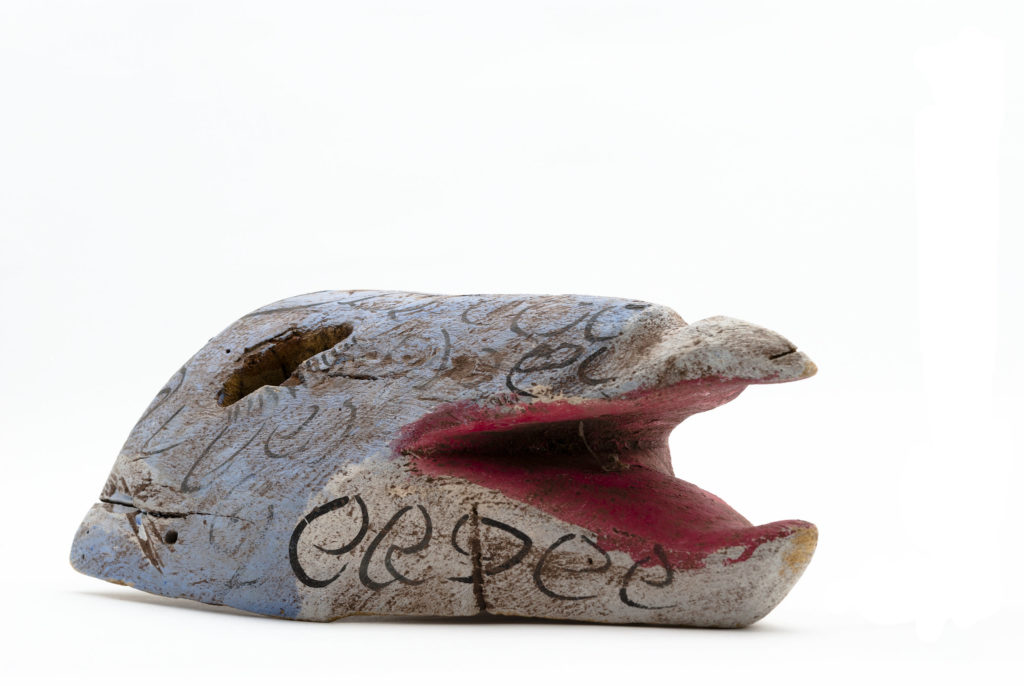 Thought to have been used in the festivals of the Tlapenic people in the Mexican state of Guerrero, this carved wooden mask resembles a bird’s head, and may have been used by men to perform the Danza de los Zopilotes (the dance of the Turkey Vultures).

Guerrero is known for producing a wide variety of masks for difference dances and festivals, many of which are based on animals. Read more about the masks in the Horniman’s collection. 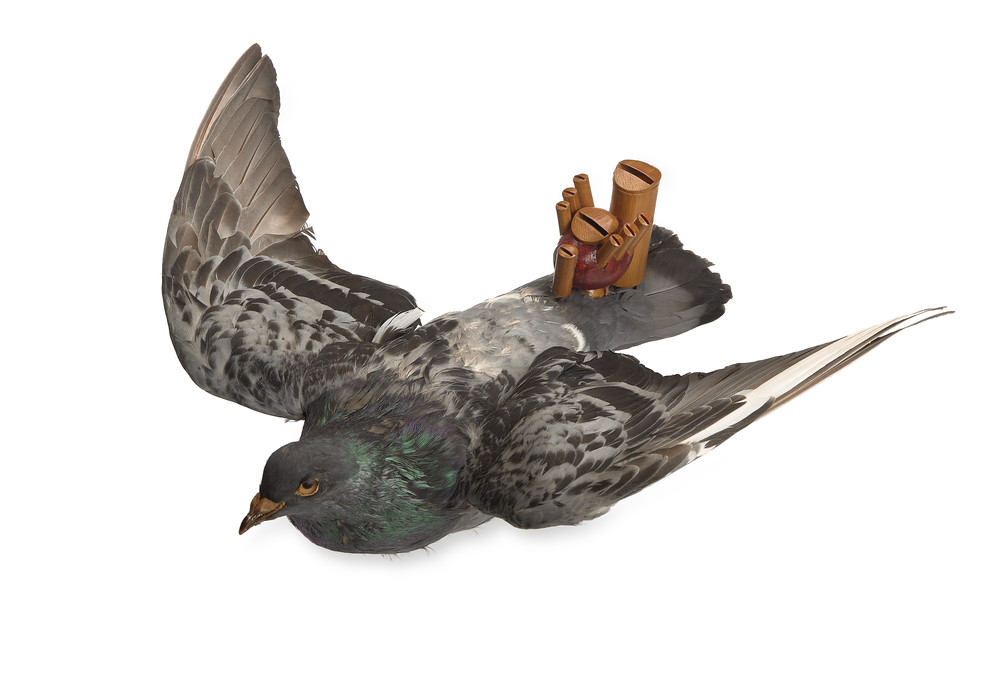 This curious object, mounted on a taxidermy pigeon, is a pigeon whistle. This Aeolian whistle only works when attached to a live flying bird, as the wind travels across and through the whistle’s different chambers.

Pigeon whistles, usually made from lightweight bamboo wood or small gourds, were once a common sound in old Beijing and are said to have been used as military signals during the Song Dynasty. Later, pigeon keeping became a popular pastime, and pigeon whistles were instead used as a form of entertainment, and to keep away predators. With the decrease in people keeping pigeons as a hobby the art of making these intricate instruments is now a dying craft. 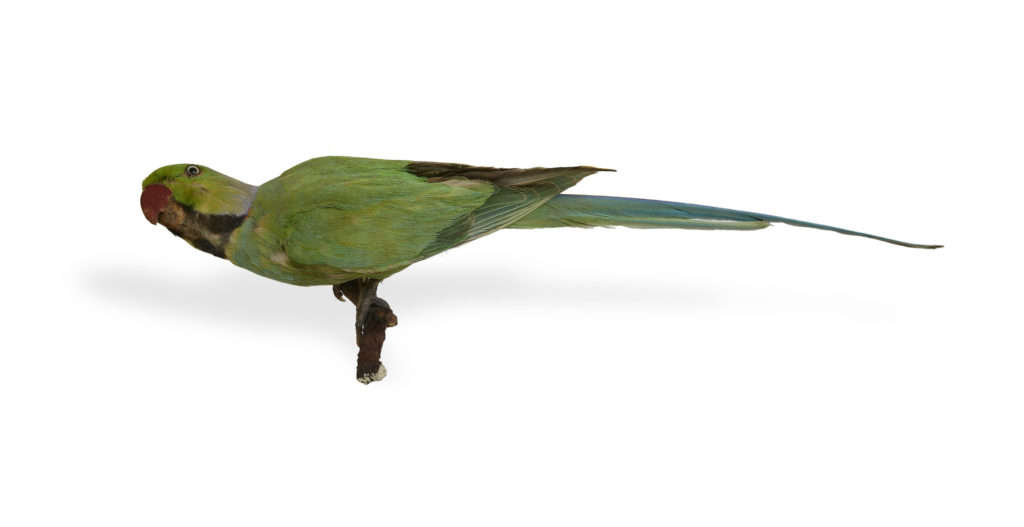 Originating from Africa and South Asia, these colourful parrots are often seen (and heard) in cities across Europe and are now especially common across Greater London. Rose-ringed, or ring-necked, Parakeets are Britain’s only naturalized parrot, and there are an estimated 8,600 breeding pairs across the UK.

Today’s population are descended from captive pets which were either intentionally or accidentally released. One particularly nice, though sadly untrue, theory is that Jimi Hendrix released a breeding pair on Carnaby street as a publicity stunt. This rumour was recently debunked when reported sightings from the 1860s were uncovered.

Made from walrus ivory, this knife was used by the Inuit to cut blocks of densely packed snow for constructing igloos, or snow houses. Igloos are made from a spiral of snow bricks, which end with the characteristic domed roof. Sometimes blocks of clear sea ice are used as windows, to let some light into the house.

Snow is an excellent insulator, and so the inside of an igloo could be surprisingly warm, with temperatures reaching as high as 16 °C through body heat alone. A warm interior also helps improve the strength of the house, as a layer of snow inside the igloo melts and refreezes as ice. Fires are often lit inside the igloo once it is constructed, to speed this process up. 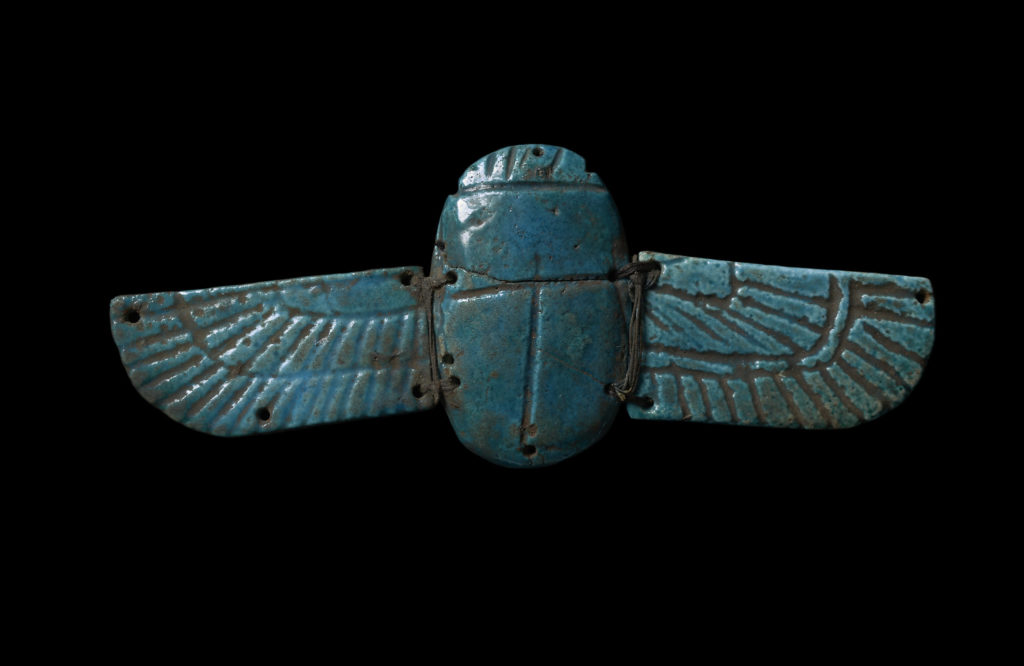 An icon synonymous with Ancient Egypt, the scarab is associated with the god Khepri, who represents the morning sun, creation and rebirth. Like many of the Ancient Egyptian scarabs This example is made of faience, the earliest type of glazed ceramic.

The scarab played an important role in the burial ritual: the amulet was placed on the heart of the mummy with a spell on the underside which tells the heart not to give evidence against the deceased during the judgement of the gods. A sinful heart would have been devoured by Ammit, Devourer of the Dead and Eater of Hearts, and the deceased would suffer a second death, their soul forever restless. 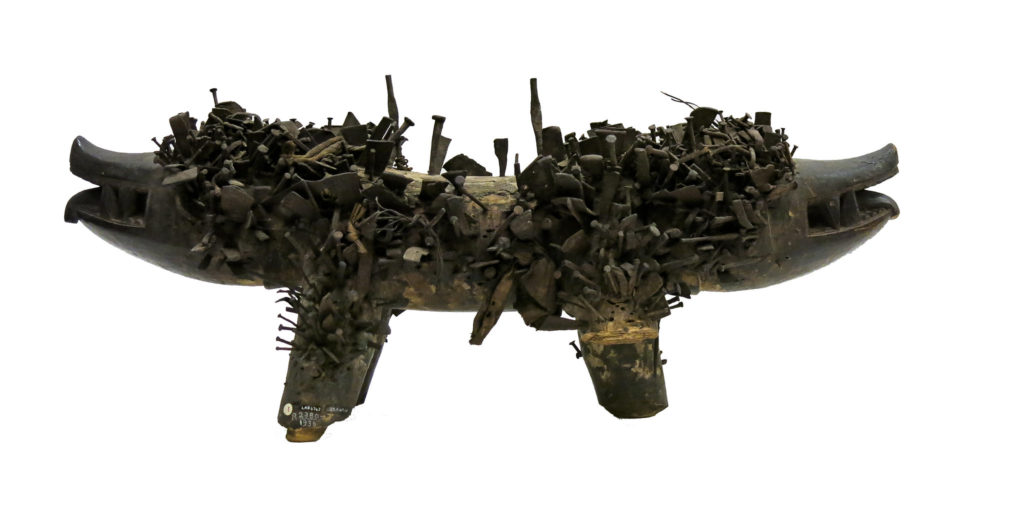 This is a nkisi, a ritual figure central to the beliefs of the BaKongo people of Central Africa. They are used to contain sacred medicine and can also be used to resolve disagreements and disputes – the nails, blades and pegs inserted into the figure represent these. The figure is pierced by the nganga, the spiritual specialist who activates the nkisi. Minkisi can either contain or release spiritual forces – whether to heal and protect, or to cause harm.

This nkisi has the form of a two-headed dog, Nkisi Kozo, and is known for hunting witches. Dogs are often depicted with two heads or four eyes because they are believed to be able to see both into the land of the living and the land of the dead. 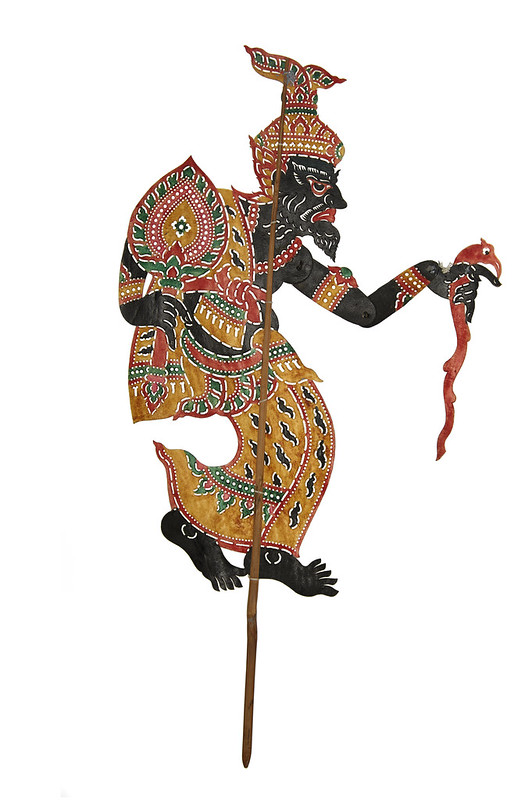 Made from parchment and ornately decorated in black, red, yellow and green, this shadow puppet depicts Reusi, the Hermit – a character present in all Thai shadow plays. Shadow puppetry is an ancient form of storytelling, but the tradition of the art form in Thailand originated in the 1400s.

Thai shadow plays normally recall parts of the Ramakien, Thailand’s famous national epic based on the Ramayana – a Sanskrit epic of ancient India. 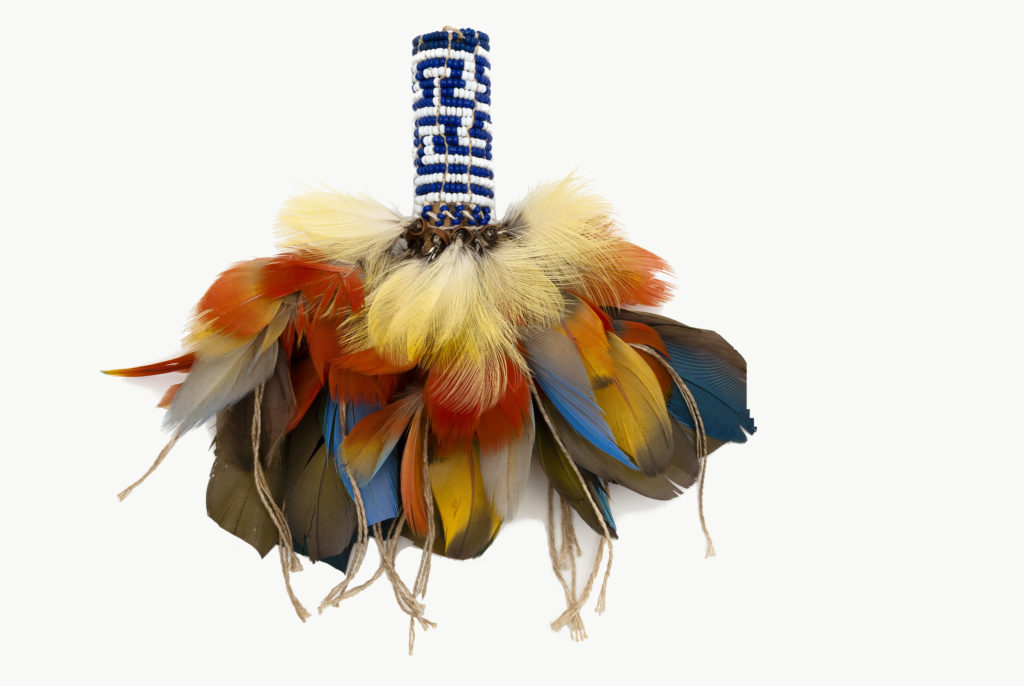 This hair tube would be worn by Wai-wai men and boys on special occasions. The smallest tribe in Guyana, the Wai-wai people are known for crafting beautiful ornaments by weaving, beading and using feathers from tropical birds hunted by the tribe in the rainforest.

In the dry season, the Wai-wai hold large festivals and welcome visitors for trading goods. During these festivities some visitors may marry into the village, and so making and wearing beautiful things is important in Wai-wai culture. The more beautiful a man’s feathers, the more successful a hunter he is, and the better husband he would be. 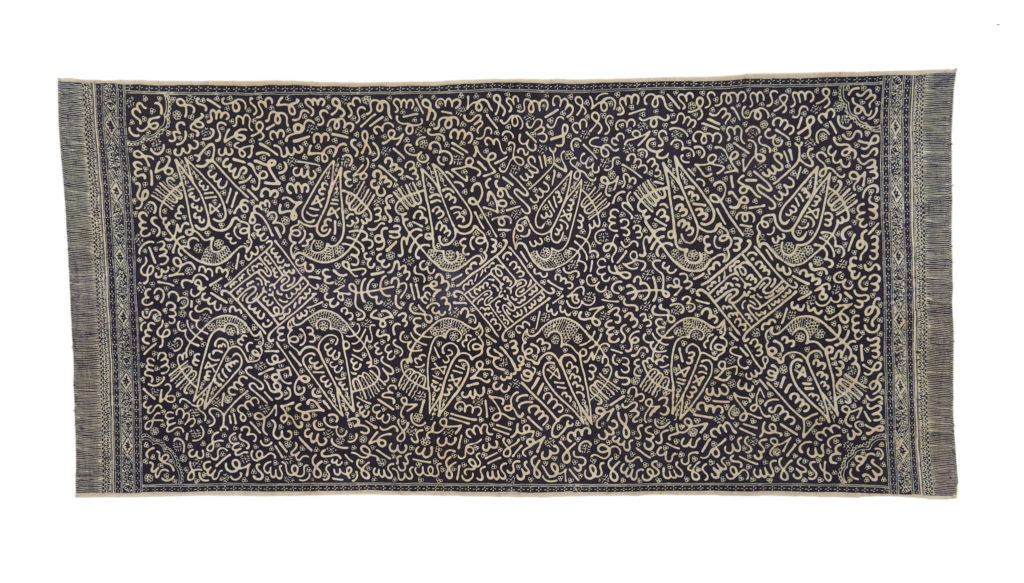 This burial cloth from Sumatra is decorated with batik, an Indonesian method of dyeing which uses melted wax drawn onto the fabric to create designs and patterns. When dried and dyed the wax resists the colour, resulting in this bold, graphic design.

This piece of fabric is decorated with a pattern of birds and stylised Arabic script, revealing its role in Indonesian Islamic burial traditions. 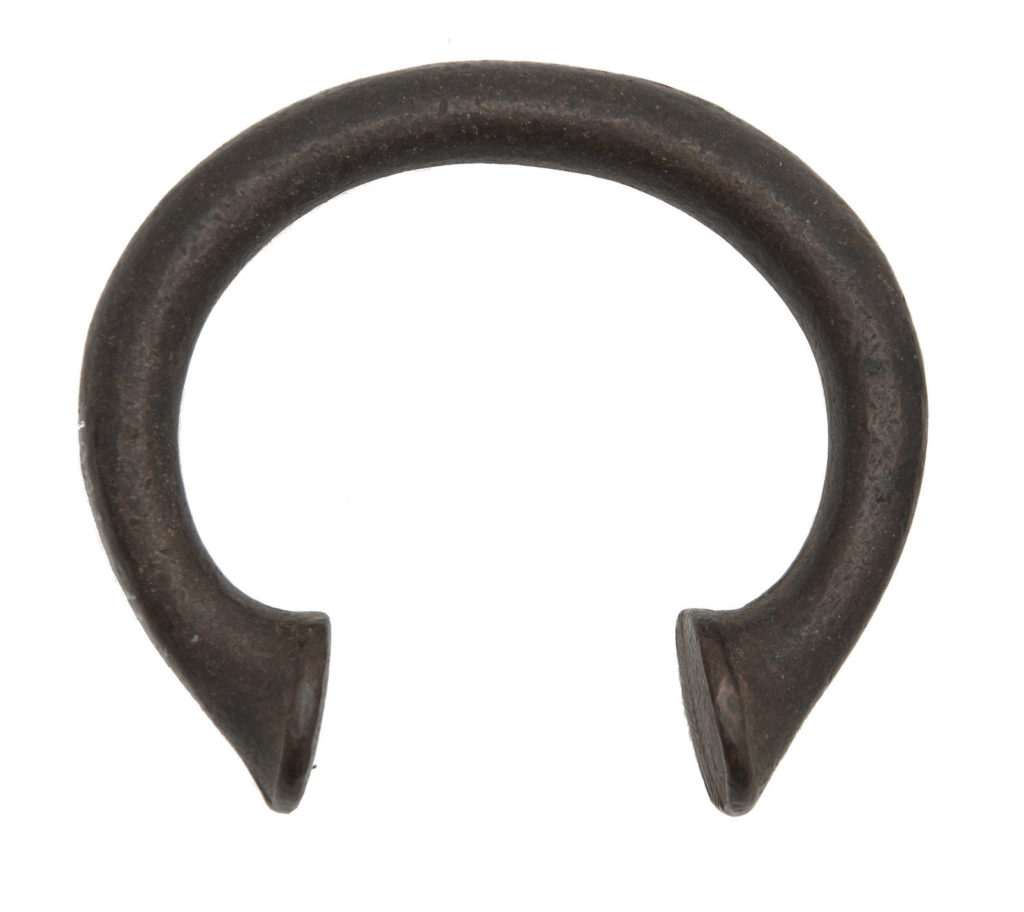 One of the oldest forms of currency on earth, manillas were used in West Africa until the mid 20th century, when they ceased to be legal tender, and were removed from circulation by the British to be replaced with British West African currency. While originally used for trading goods such as food and animal skins, the currency became closely associated with the slave trade, as the cost of a slave was given in manillas.

Usually made from copper or bronze, manillas were produced in different sizes and weights, to represent different denominations of currency. Brass manillas were manufactured in Birmingham, exclusively for use in the slave trade. A number of manillas remained in circulation after the currency’s demise, for ceremonial use only.