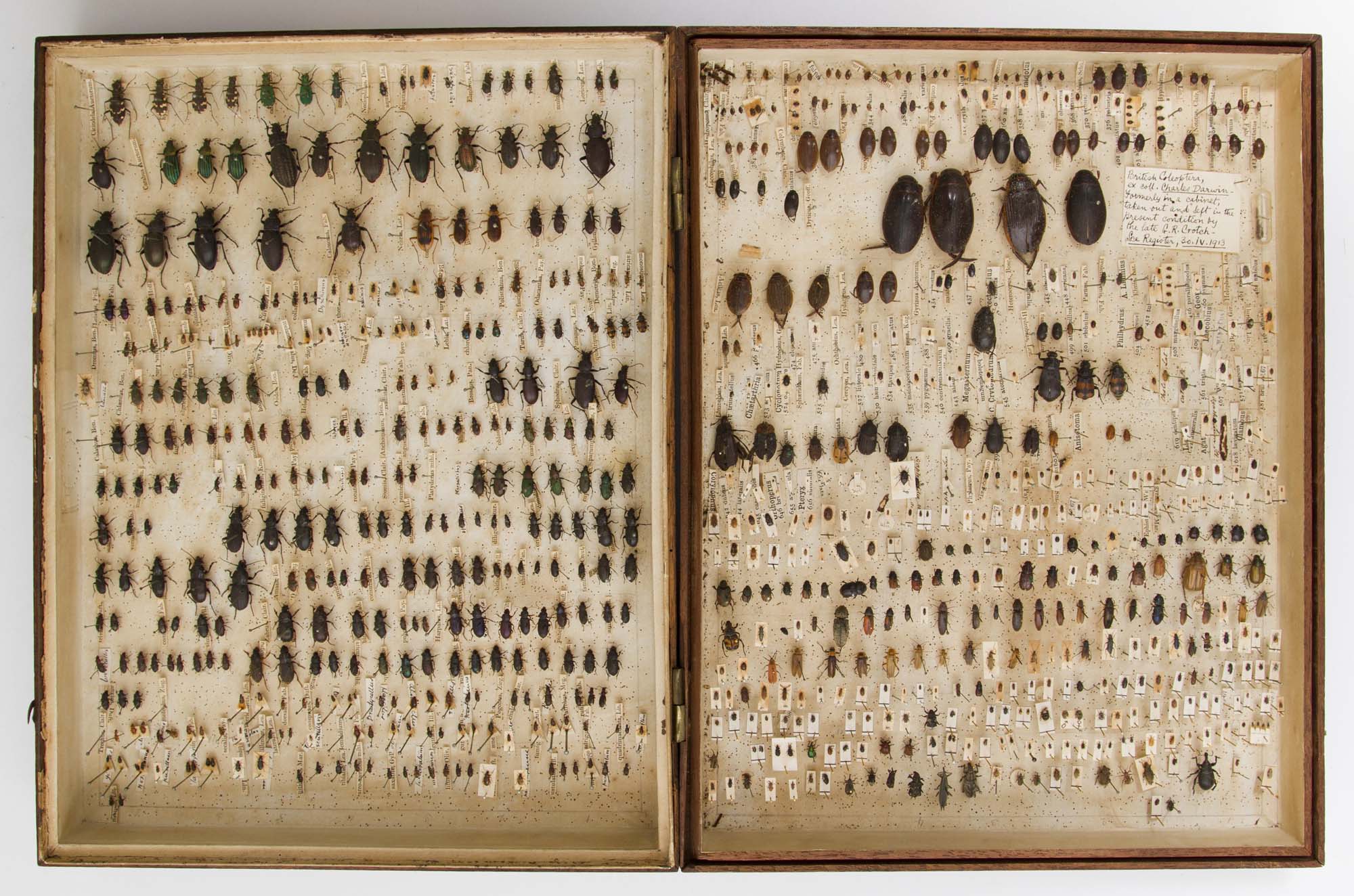 As the University of Cambridge’s Museum of Zoology reopens to reveal its world-leading collections, Curator of Insects, Dr Ed Turner, discusses their collection of specimens collected by Charles Darwin

Darwin spent two years at Christ’s College in Cambridge, studying to be a man of the cloth, but he ended up spending a lot of his time studying natural history, with people like John Stevens Henslow and Adam Sedgwick, both extremely important in the young Darwin’s development.

Darwin was already interested in natural history and knew quite a lot about biology from being up in Edinburgh, where he was studying for a medical degree. However, this didn’t work out, which is why he came to Cambridge.

He spent a lot of his time here collecting beetles. His cousin William Darwin Fox was already here when he arrived and they were both very, very keen on beetles, so they spent lot of time in the 1830s searching for them in the Fens around Cambridge, when large areas of wetlands were still undrained.

We have a collection of beetles, which is said to be Darwin’s undergraduate beetle collection. One of the other curators here thinks it might have been collected by Darwin later, when he spent a year in Cambridge after returning from the Beagle voyage.

They came to us from a man called George Robert Crotch who was a sort of pen pal of Darwin’s and the global leader in collections of ladybirds. He got Darwin’s collection of undergraduate beetles, which he then bequeathed to the Museum with the rest of his collection. 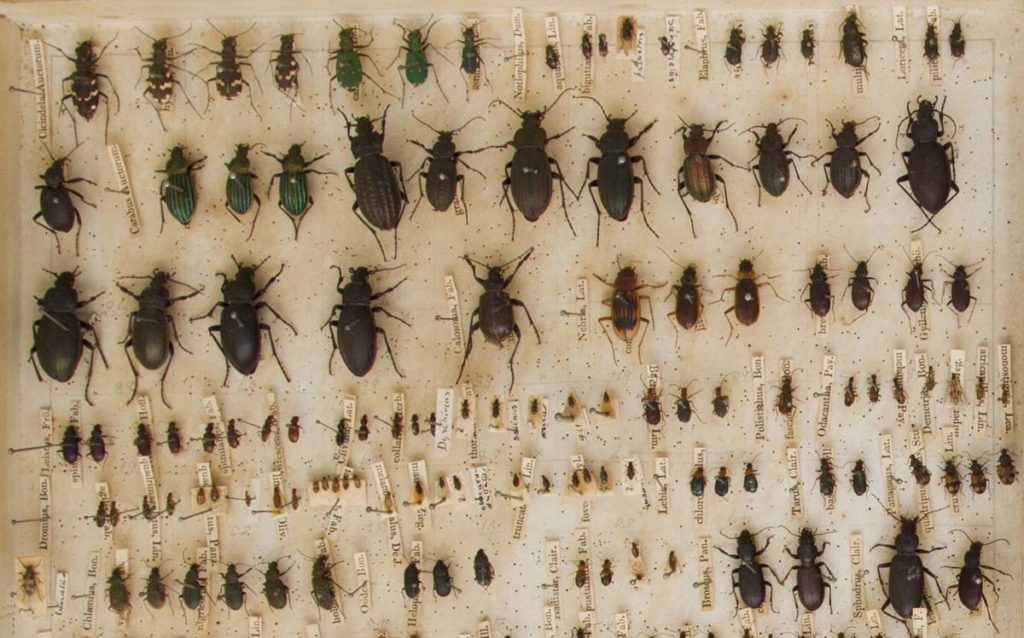 The beetles seem to have been moved and the labels aren’t original, but they are more or less what you’d expect to be living in and around Cambridge at that time. The beetle box itself is about a foot long, with two sides, so it contains quite a number of beetles – probably a couple of hundred.

I always wonder whether seeing the variability within an individual species was one of the things that first helped the penny drop with the idea of natural selection. People are quite aware that our own species differs from individual to individual and that we all look different, but you really have to look to see those differences in all other species – including in beetles. Perhaps by collecting them and looking at them Darwin had that insight.

The collection gives you an idea of what he might have been like. A lot of natural historians or biologists are, at heart, collectors. We collect diversity. We want to know what species there are, we want to be able to name them. Perhaps we want to collect them.

From that point of view the beetles show you Darwin was thinking along the same lines; understanding and cataloguing.

Unfortunately the labels have been disassociated from the specimens; they’re not handwritten Darwin labels. Darwin wasn’t always brilliant at labelling specimens. He was quite a good collector but he was sometimes collecting for collecting’s sake, rather than cataloguing exactly where he found an individual.

The information from Darwin labels is rather variable; rather than saying where exactly he found something it might say “Brazil”, which doesn’t really help. I think we’ve got one that is labelled “South America”. 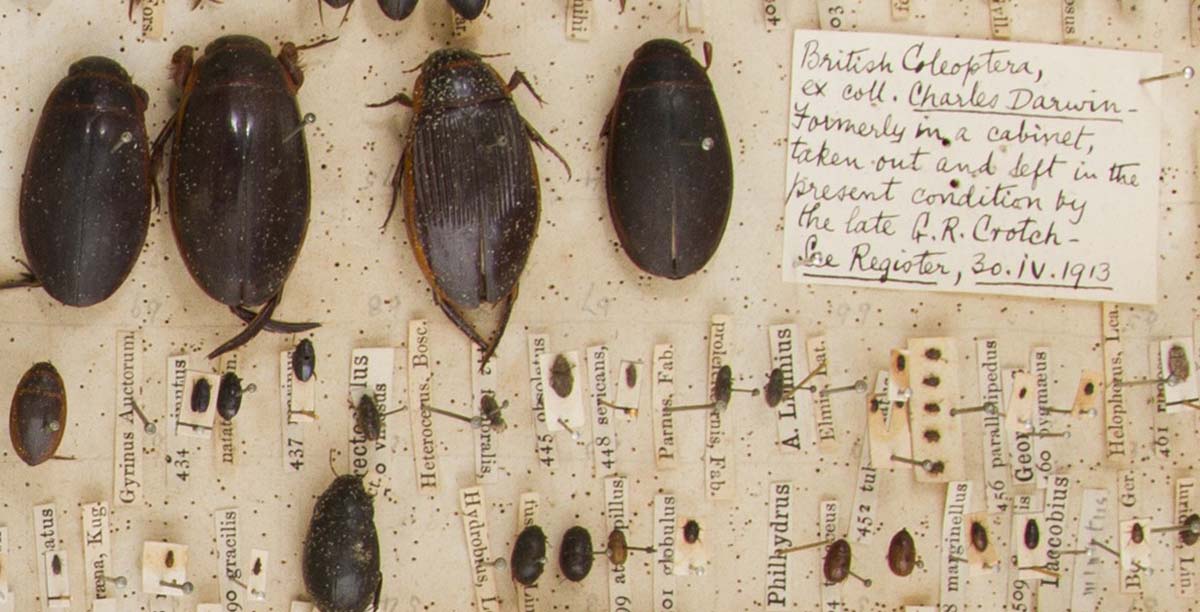 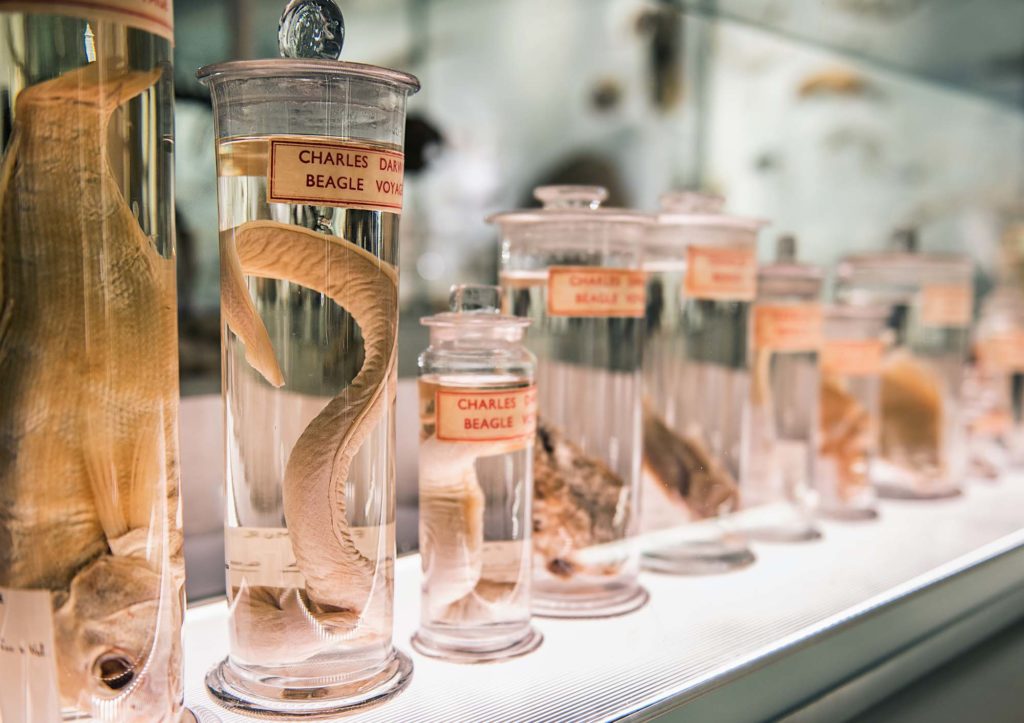 Famously he didn’t initially realise that different Galapagos Islands had different species of tortoise found on them. It was the governor of Galapagos who pointed that out to him. He was then able to go back over the specimens he’d collected and re-label them. It was the same with Darwin’s finches – he didn’t label which island they came from. Robert Fitzroy, the captain of the Beagle, was much more diligent in doing that – Darwin’s assistant did the same thing. So Darwin’s collection was basically re-labelled afterwards to work out what islands specimens were from, based on other people’s more detailed notes.

We have lots of Darwin specimens in the Museum, many of them from the Beagle voyage, and in the insect room we have lots and lots of beetles that Darwin sent back. These have been integrated in various ways, so there’s Darwin material right across the collection.

He was prolific in collecting on the Beagle voyage and a lot of the material ended up back here because he had the existing connection with Cambridge and because Henslow was here.

The Natural History Museum has probably got more Darwin specimens than anywhere else and Oxford Museum of Natural History has also probably got more than us. Specimens are spread around. That’s almost always what happens when you have these very large collections. When Darwin wasn’t able to identify groups of organisms, they would often be shipped around experts to enable them to be identified.

We’ve also got a very famous egg. I think it’s the only known egg to still be in existence that was collected by Darwin on the Beagle voyage, and actually it’s broken – it’s got a crack across it. But we’ve got quite good notes showing that Darwin did that himself, he put it in too small a box.

We’ve got a big collection of Darwin slides of barnacles. He spent over 10 years studying barnacle taxonomy in quite a serious way. He was already working on the Origin of Species and had the theory well developed by the time he started working on them. 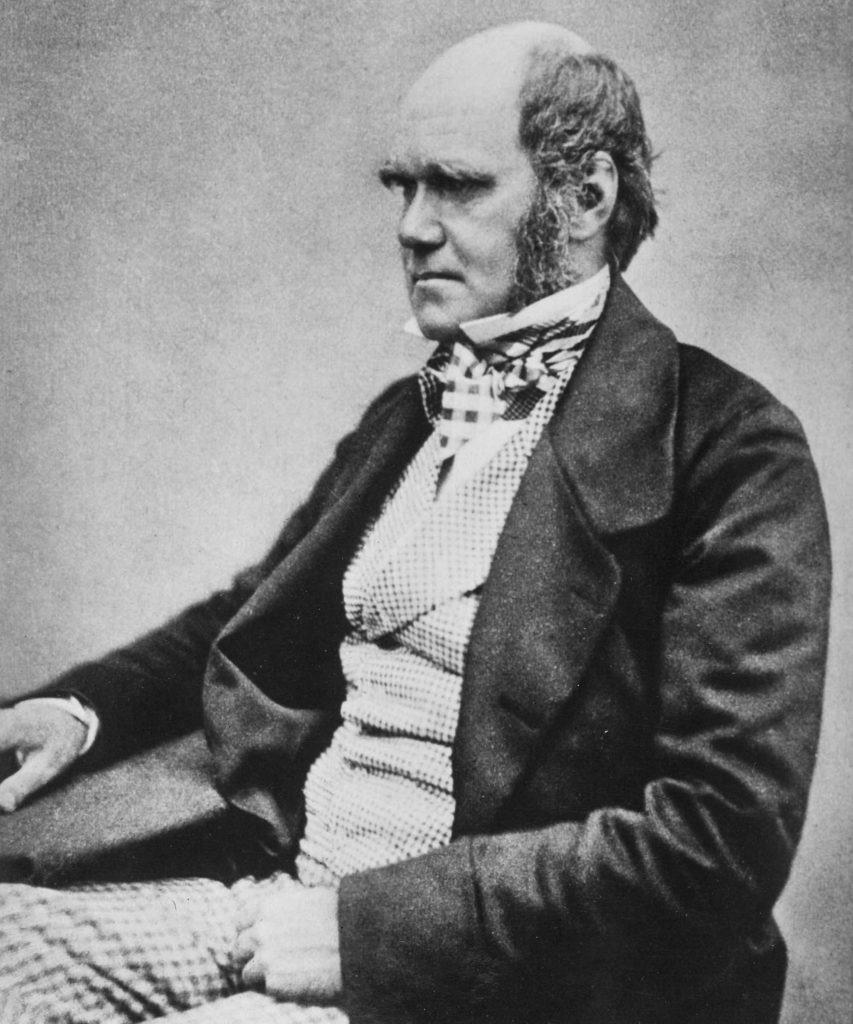 Charles Darwin pictured sometime around 1854 before the publication of Origin of Species. Public Domain.

Around that time, a book called the Vestiges of the Natural History of Creation was published anonymously by Robert Chambers, of the encyclopaedia fame. It was about evolution but it wasn’t very well substantiated. It was about change but not natural selection change – and it received very mixed reviews. It’s thought that Darwin looked at that and became worried that his reputation may also be at stake, so to make sure he would be taken seriously he decided he needed to be a serious scientist. And the way you became a serious scientist in those days was to get to know a group really well and become an expert on them. So he chose barnacles.

As well as the Darwin barnacles, we have also have fishes collected during the Beagle voyage on display together with the beetle box. However, the beetle box won’t be on display forever, as we have to be careful to ensure that specimens don’t fade or get damaged. We have a duty of care to make sure that these specimens are available for future generations to see and to study.

In the longer term, specimens like the Darwin beetles can also enable us to learn things about how the environment has changed over the last 200 to 250 years. These collections can help us to understand how species have evolved and also why species have gone extinct.

“We use the collection to travel back in time”

Our collection is very well used. We have undergraduate classes in a diverse range of subjects that make use of the Museum and its specimens.

Researchers based here in the Museum are also using the collection, and we have people who visit us from all over the world to study the taxonomy of different animal groups or their biology. People might even take small samples from specimens to do genetic work or for isotope analysis, to find out what species were feeding on.

We’ve also got ongoing projects looking at the beetles collected in Darwin’s time in the Fens around Cambridge, investigating how species have increased or decreased over time. We’ve been able to use them to travel back in time, if you like. 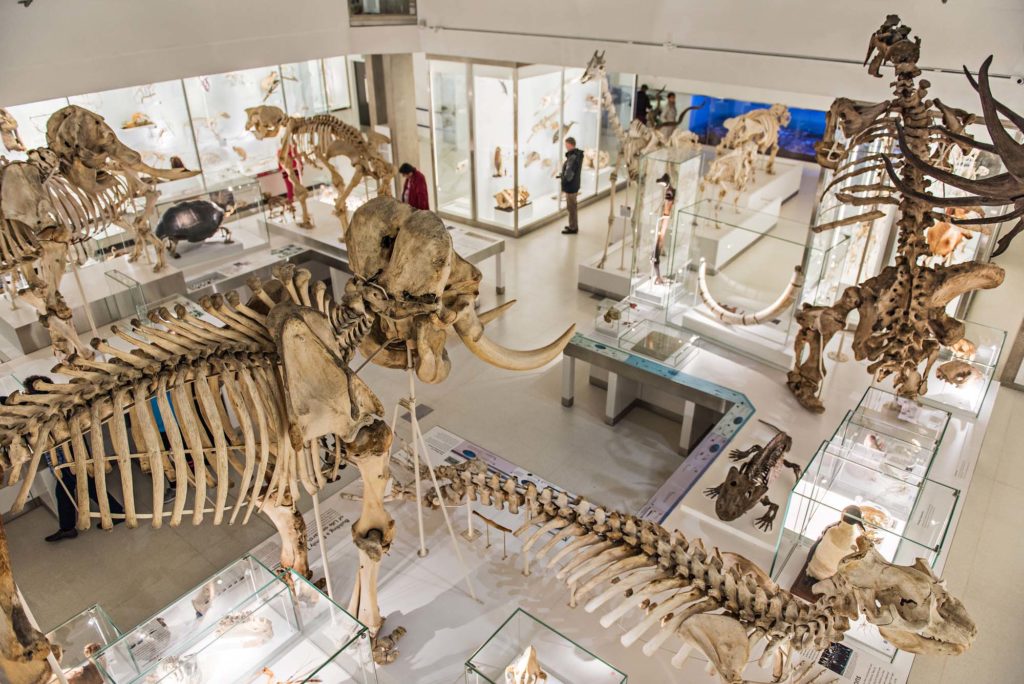 Museum of Zoology. © University of Cambridge and Julieta Sarmiento Photography

Physically we sit in between the David Attenborough Building, which is full of the best conservation minds in the country and the Department of Zoology, which has researchers carrying out cutting edge research in evolution and biology.

By being in the position we’re in, we can showcase modern conservation practice and research and modern biological research. We’re a kind of shopfront for the work that’s going on in the University.

The University Museum of Zoology, one of the UK’s largest and most important natural history collections, is now open. Entry to the Museum is free.