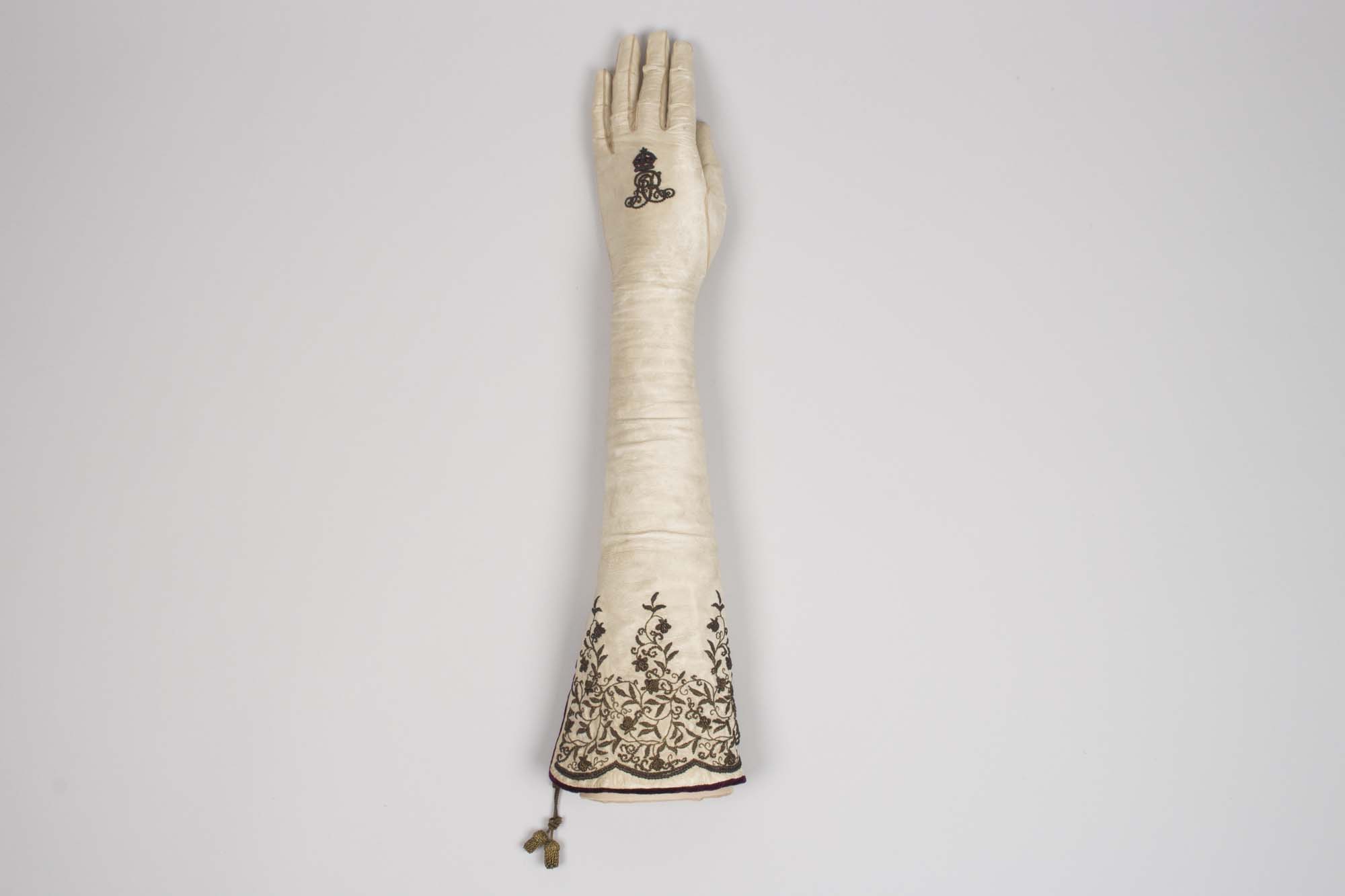 The Fashion Museum in Bath is exploring the fashion choices of four British royal females, from the late nineteenth to the mid-twentieth century

Wives and daughters, sisters and mothers; none of the women in this sartorial look at female royalty were reigning monarchs, yet they all played a key role in the British monarchy – a role that was often reflected in their fashion choices.

Royal Women is a kind ‘family tree’ exhibition looking at the clothes worn by Queen Alexandra, Queen Mary, Queen Elizabeth The Queen Mother, and Princess Margaret, the exhibition features exquisite items of dress from the Fashion Museum collection, as well as a major loan from the Royal Collection. 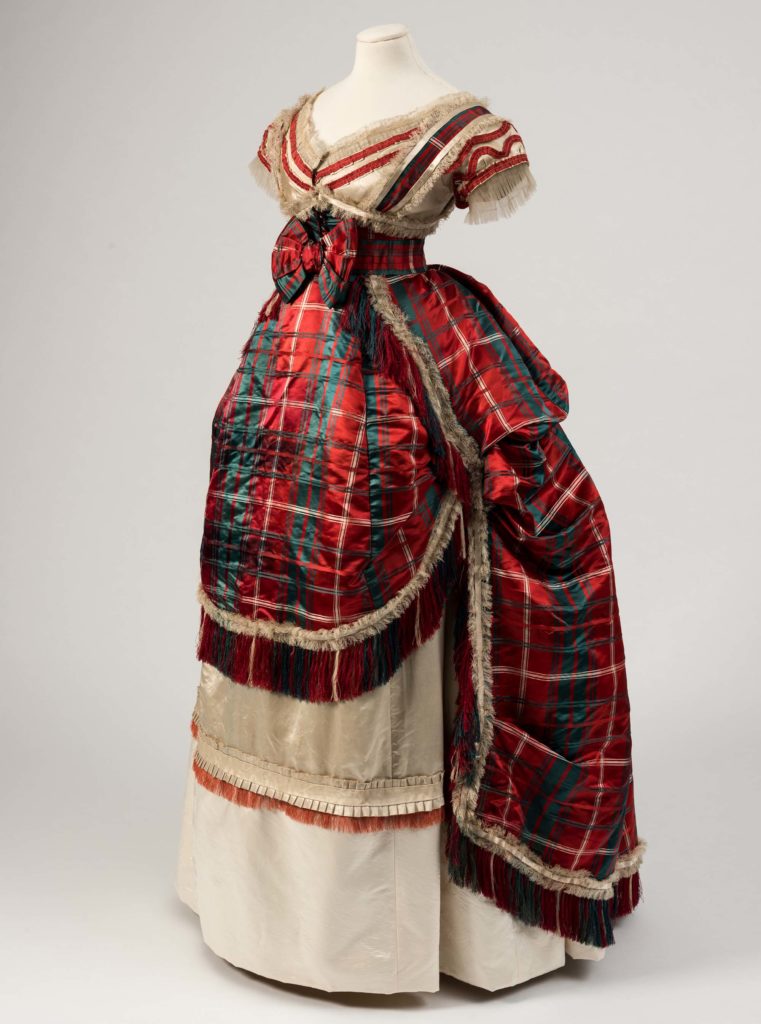 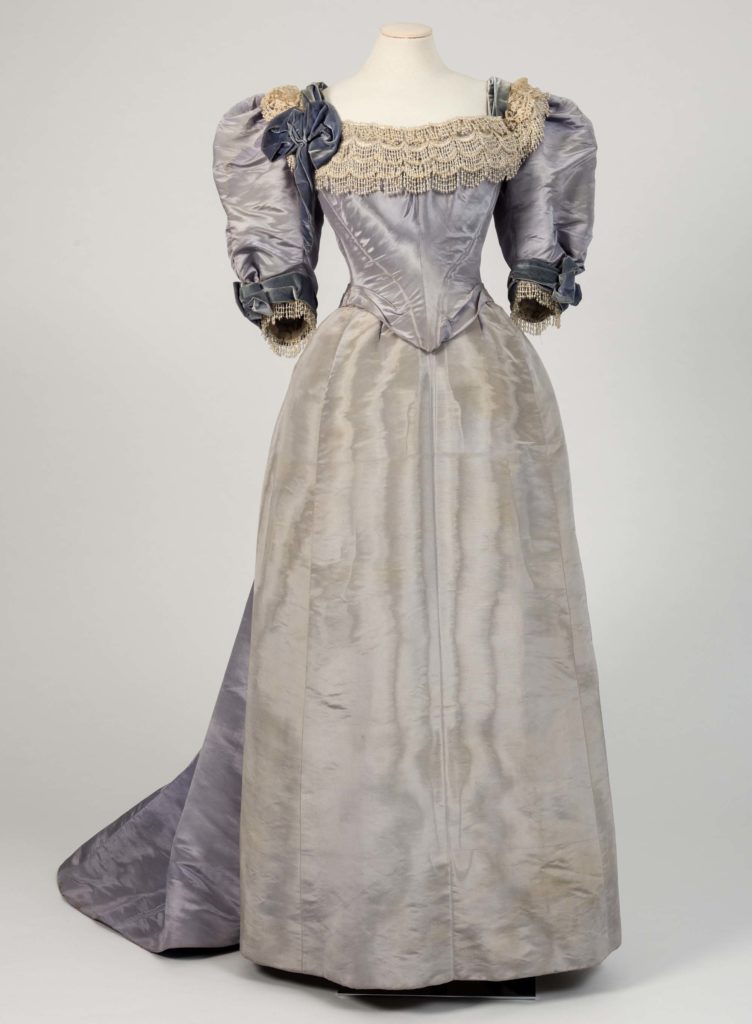 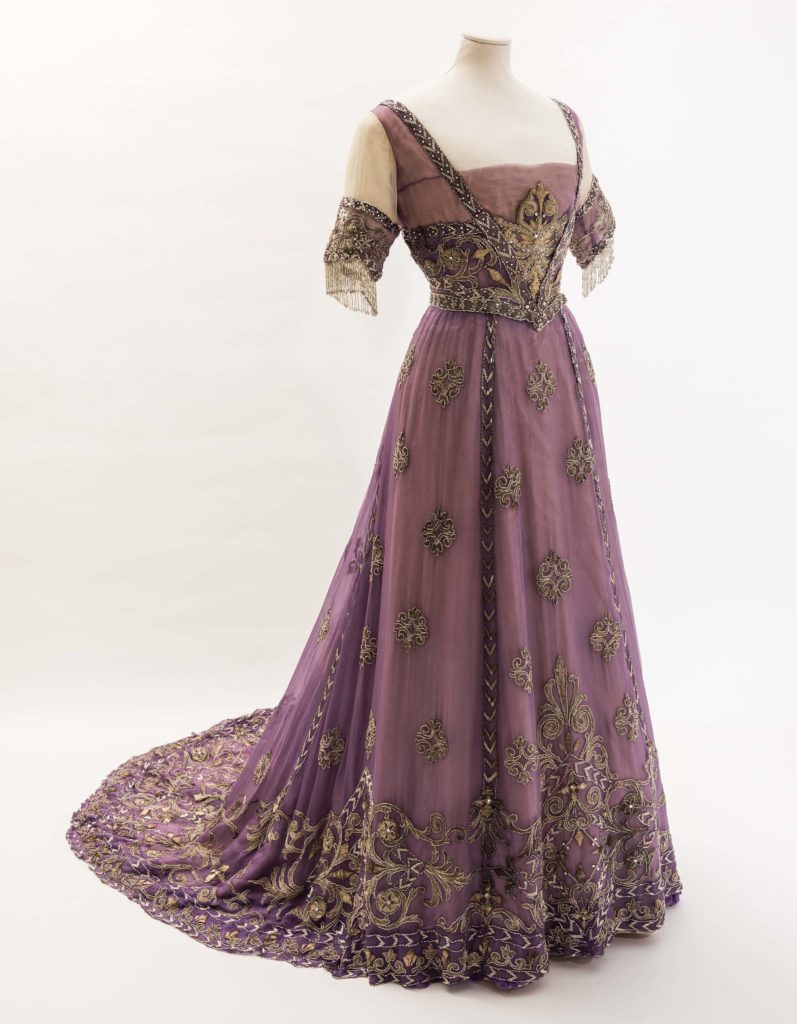 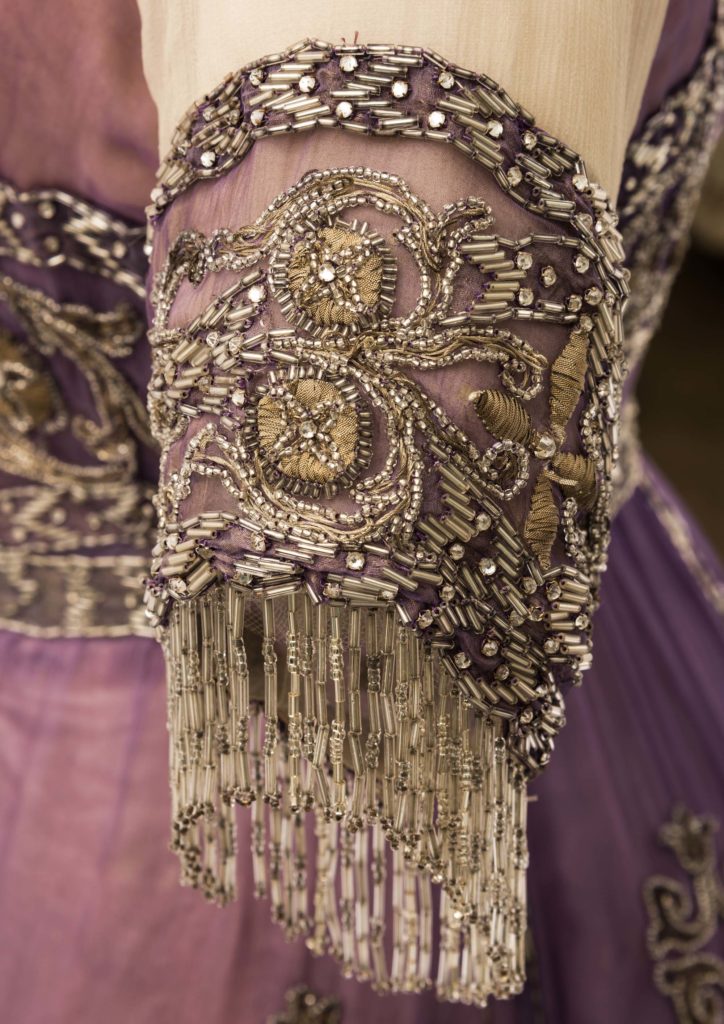 Queen Alexandra was a fashion icon whose look was quite different from that of her mother-in-law, Queen Victoria. She set a trend for chokers and high necklines and was well known for her elegant, tailored daywear.

The tartan silk dress at top bdates to about 1870 and was made by Madame Elise. It was probably worn by Alexandra to a function at the Palace of Holyroodhouse, the official residence of the monarch in Scotland.

Following Alexandra’s death in 1925, many of Alexandra’s dresses were dispersed and even today the whereabouts of many remain a mystery. But this colourful dress, now a treasured part of the Fashion Museum collection, was discovered in the 1930s in a high end ‘vintage’ shop called Baroque in Margaret Street in London, and from there made its way into the Museum collection.

The purple silk chiffon dress dating to 1910 and made by Madame Doeuillet, of very fine, heavily embroidered silk chiffon, was most likely unworn, perhaps having been discarded for mourning clothes on Edward VII’s death. 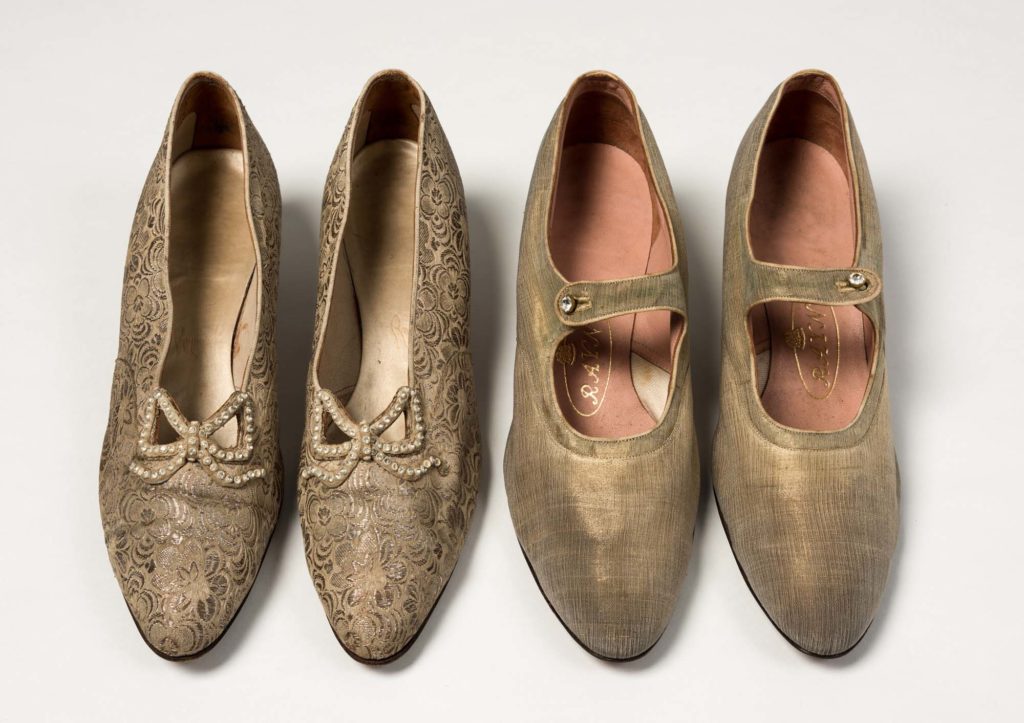 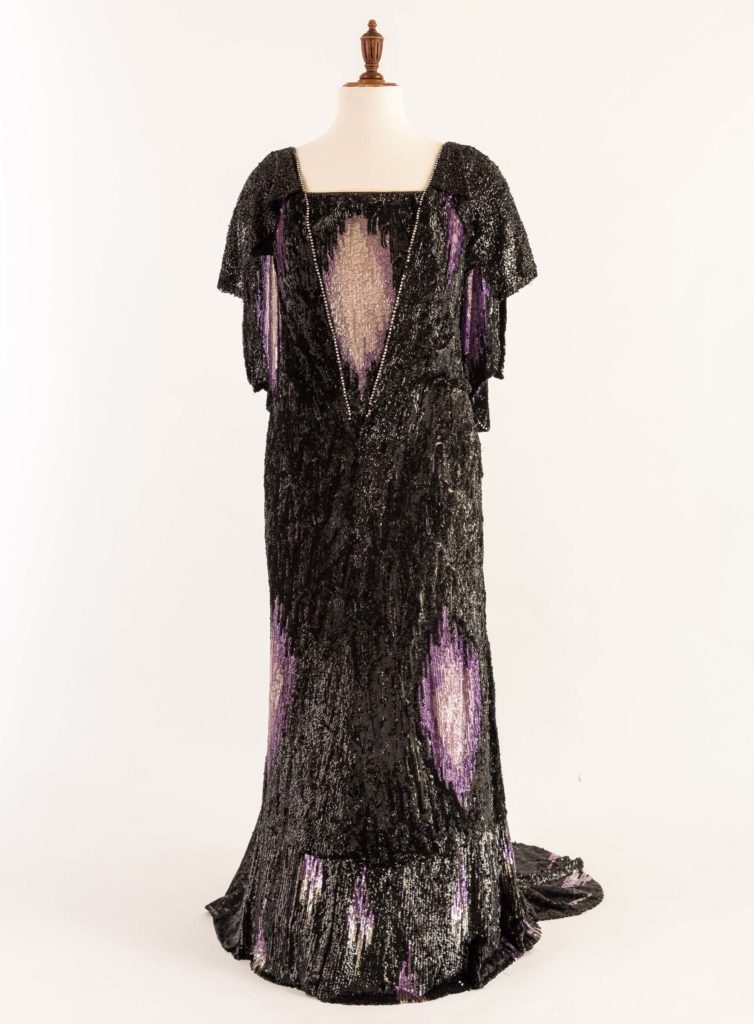 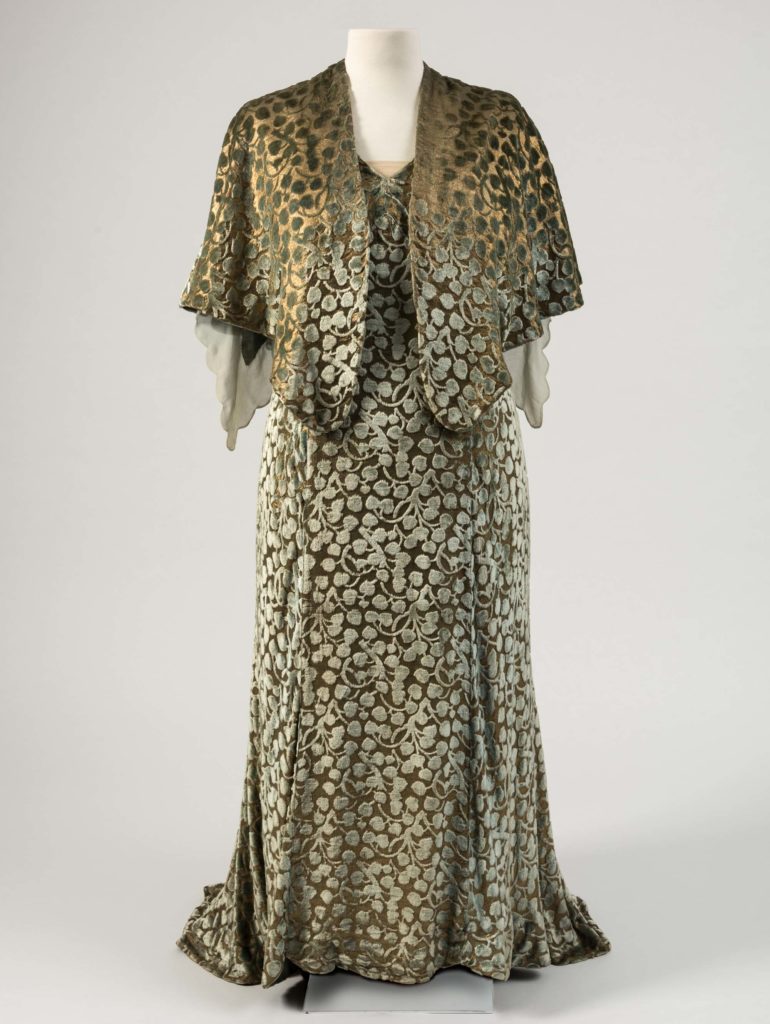 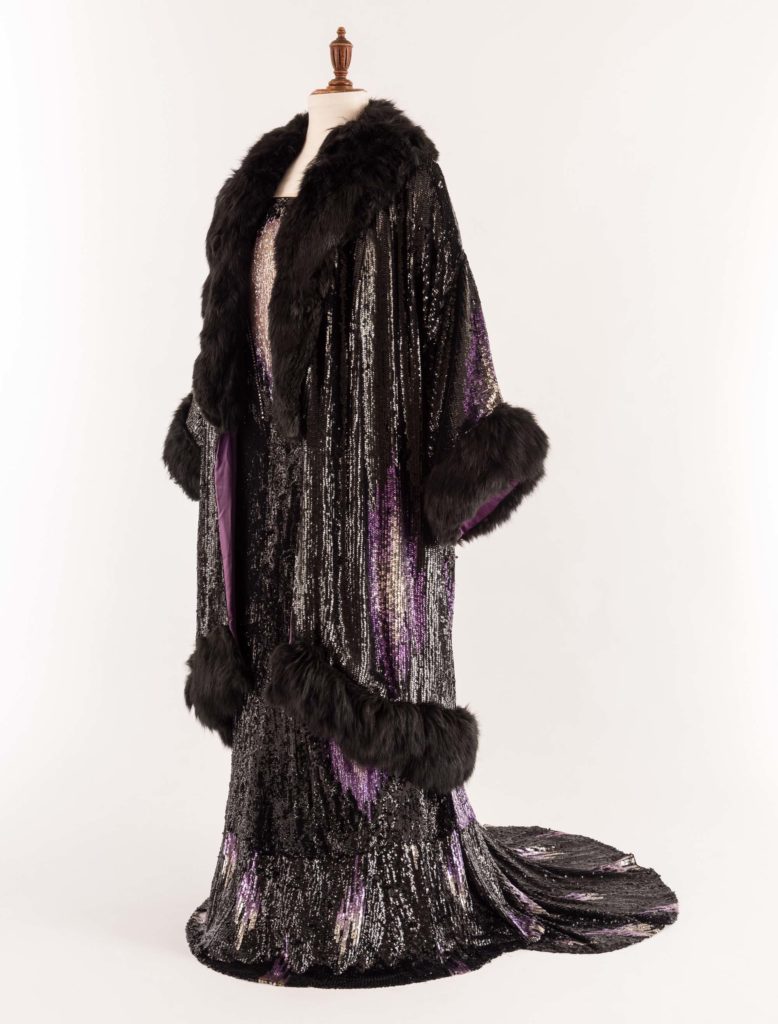 Evening dress and coat worn by Queen Mary in black and purple sequins with fur trim, about 1930. © Fashion Museum Bath

An imposing, statuesque figure, Mary was the embodiment of royalty. Her role was to be a steadying influence, reassuring the British public during difficult times, including the First World War and her dress style reflected this. Mary’s style stayed constant through dramatic changes in fashions during the first half of the 20th century. Impeccably dressed, for eveningwear she wore heavily beaded gowns and for day she wore tailored suits and large toque hats.

Mary’s dress and cape of gold lamé and turquoise cut velvet was made by Hartnell to be worn to the wedding of Princess Elizabeth and Lieutenant Philip Mountbatten RN at Wesminster Abbey in 1947. This historic commission for Hartnell included not only designing the wedding dress for the Princess, but also the dresses for her eight bridesmaids and members of her family. 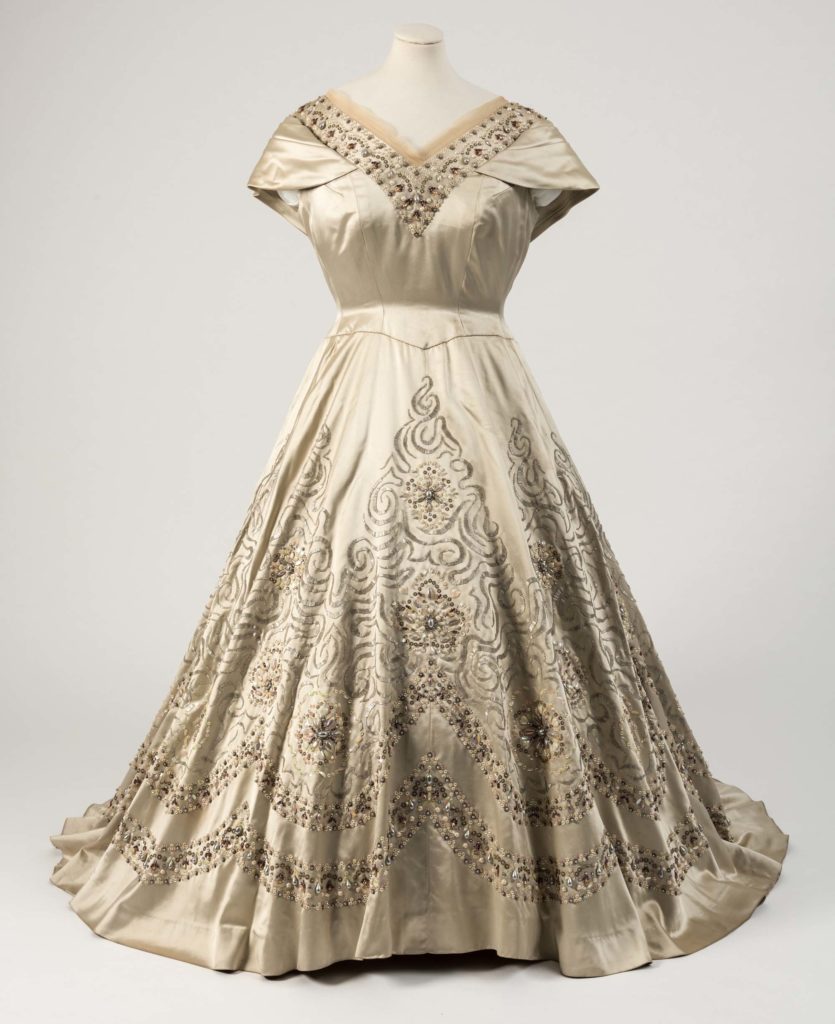 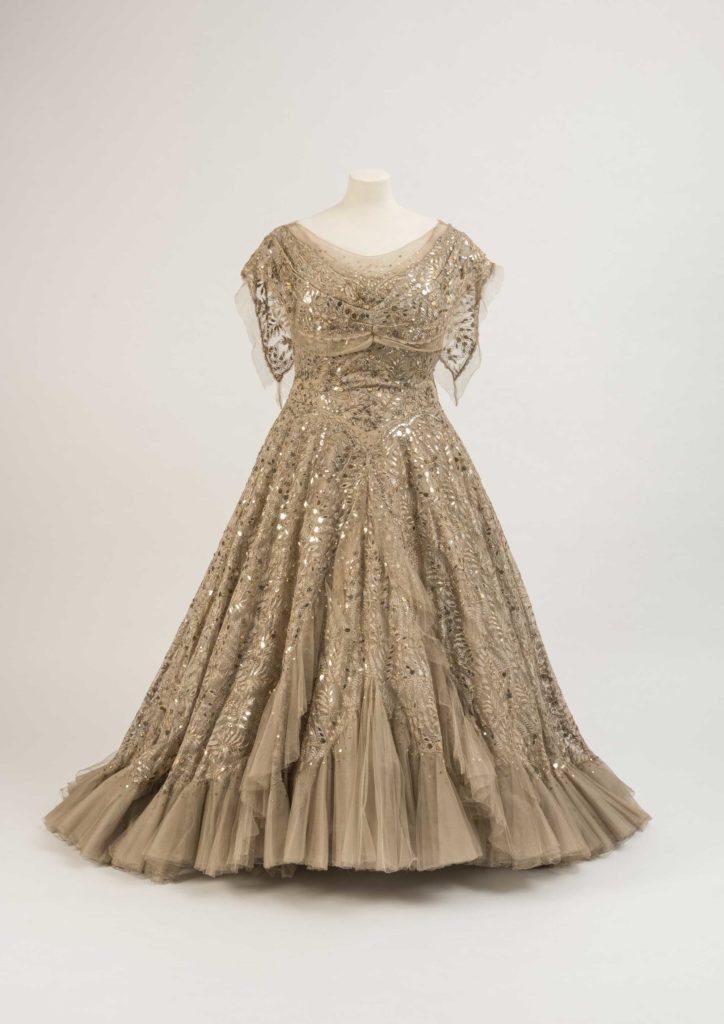 Elizabeth and King George VI were seen by many as the saviours of the monarchy and had to weather many crises, including the Second World War and the abdication of Edward VIII. Elizabeth related well to the public and brought sparkle to the image of royal women in the post-war world, when it was much needed. She loved fashion and took a keen interest in designs, fabrics and colours. Norman Hartnell designed much of what she wore – which included dramatic eveningwear and soft pastel coloured daywear that flattered her diminutive height.

On long-term loan from the Royal Collection, the dress at top made by Norman Hartnell was worn to a dinner for educational charity the English Speaking Union in New York on November 3rd 1954. Hartnell gowns were hugely labour intensive – at this time he employed 400 staff, from cutters and seamstresses to embroiderers. 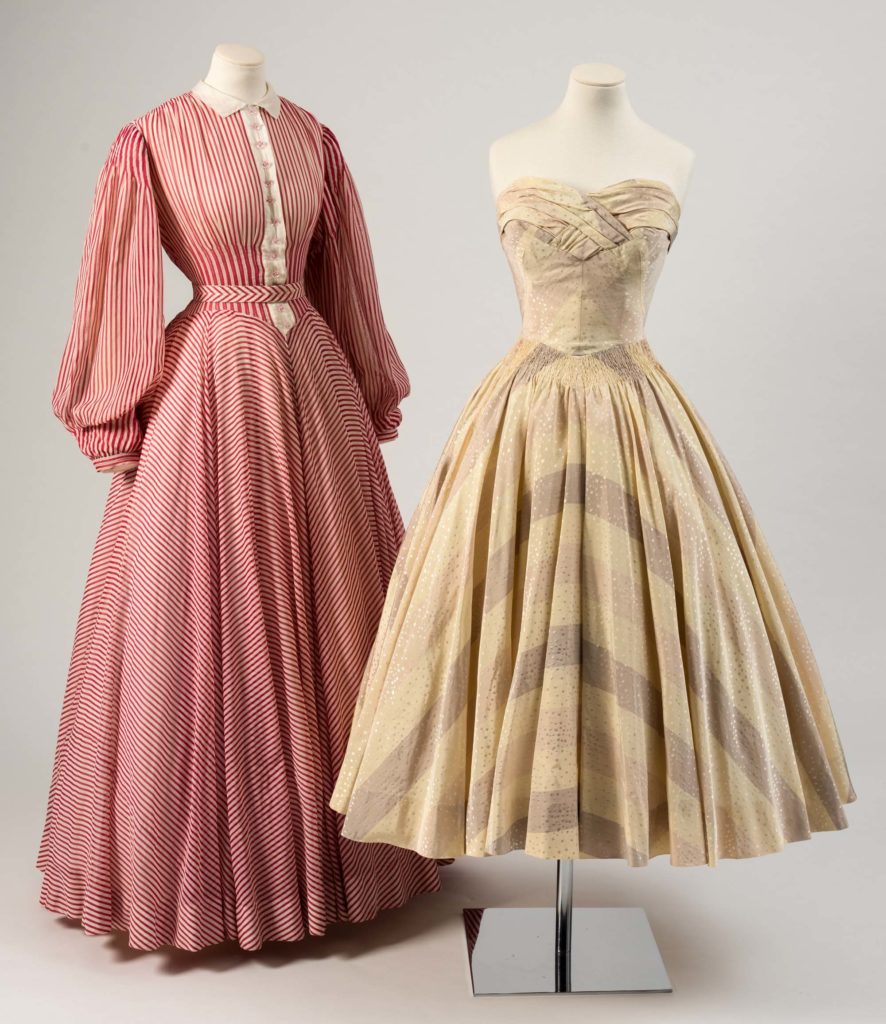 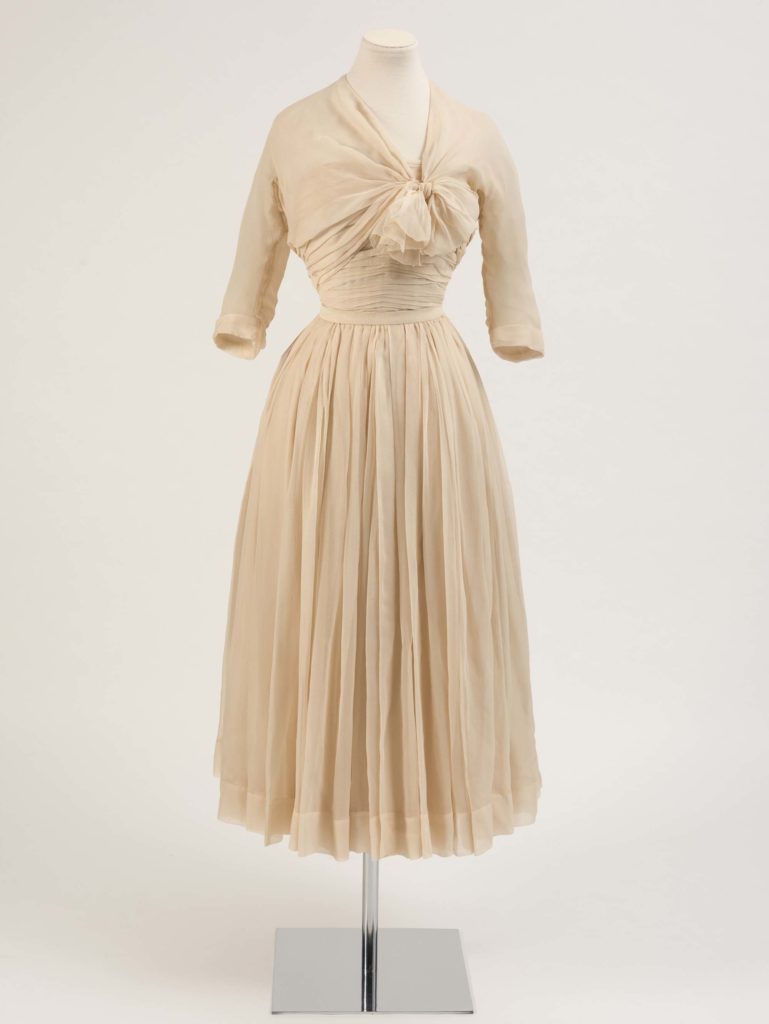 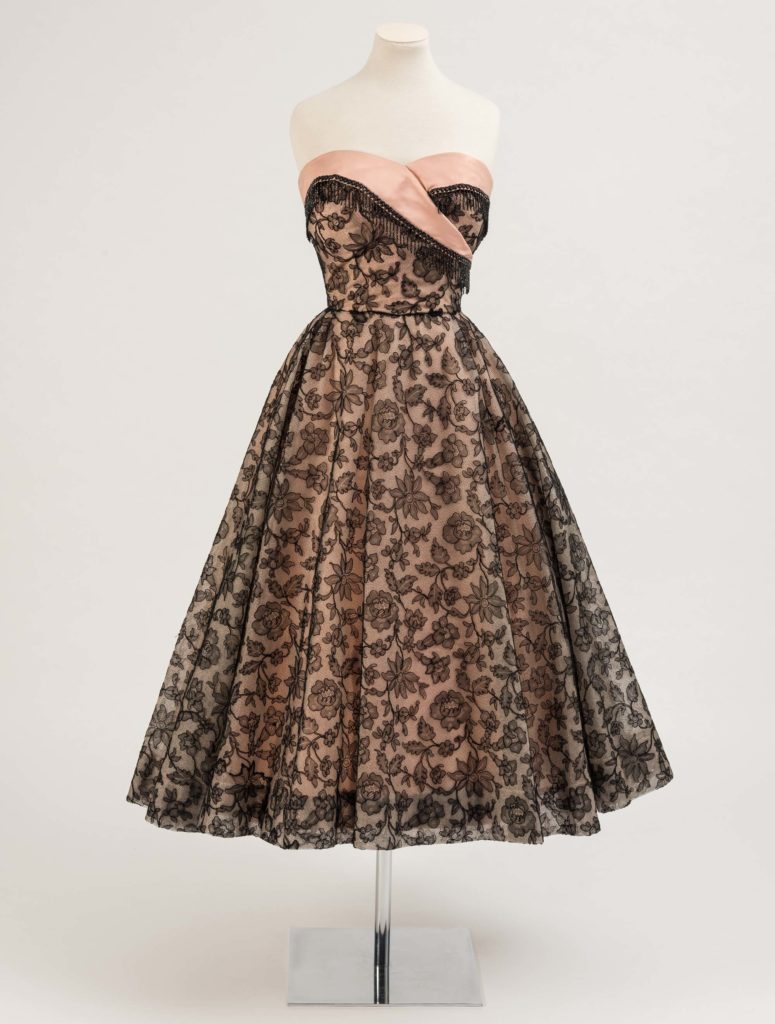 In the 1950s Princess Margaret was seen as glamorous and beautiful and was often photographed wherever she went. Unlike the reigning monarch she had more freedom to explore fashion and took great pleasure in it. Many of her earlier outfits were designed by Norman Hartnell and she became a great patron of Christian Dior after she was introduced to his New Look collection in 1947.

The Christian Dior ‘Rose Pompon’ strapless cream silk chiffon day dress was worn by Princess Margaret to Royal Ascot in 1952 and the Dior strapless black lace evening dress was worn by the Princess to a performance of Guys and Dolls at the London Coliseum on 23 July 1953, which she attended along with her sister The Queen and Prince Philip.

The Fashion Museum Bath holds a world-class collection of contemporary and historic dress located in a World Heritage City. The museum was founded by writer and collector Doris Langley Moore as the Museum of Costume, Bath and has been based in Bath’s Grade 1-listed 18th century Assembly Rooms since 1963.…