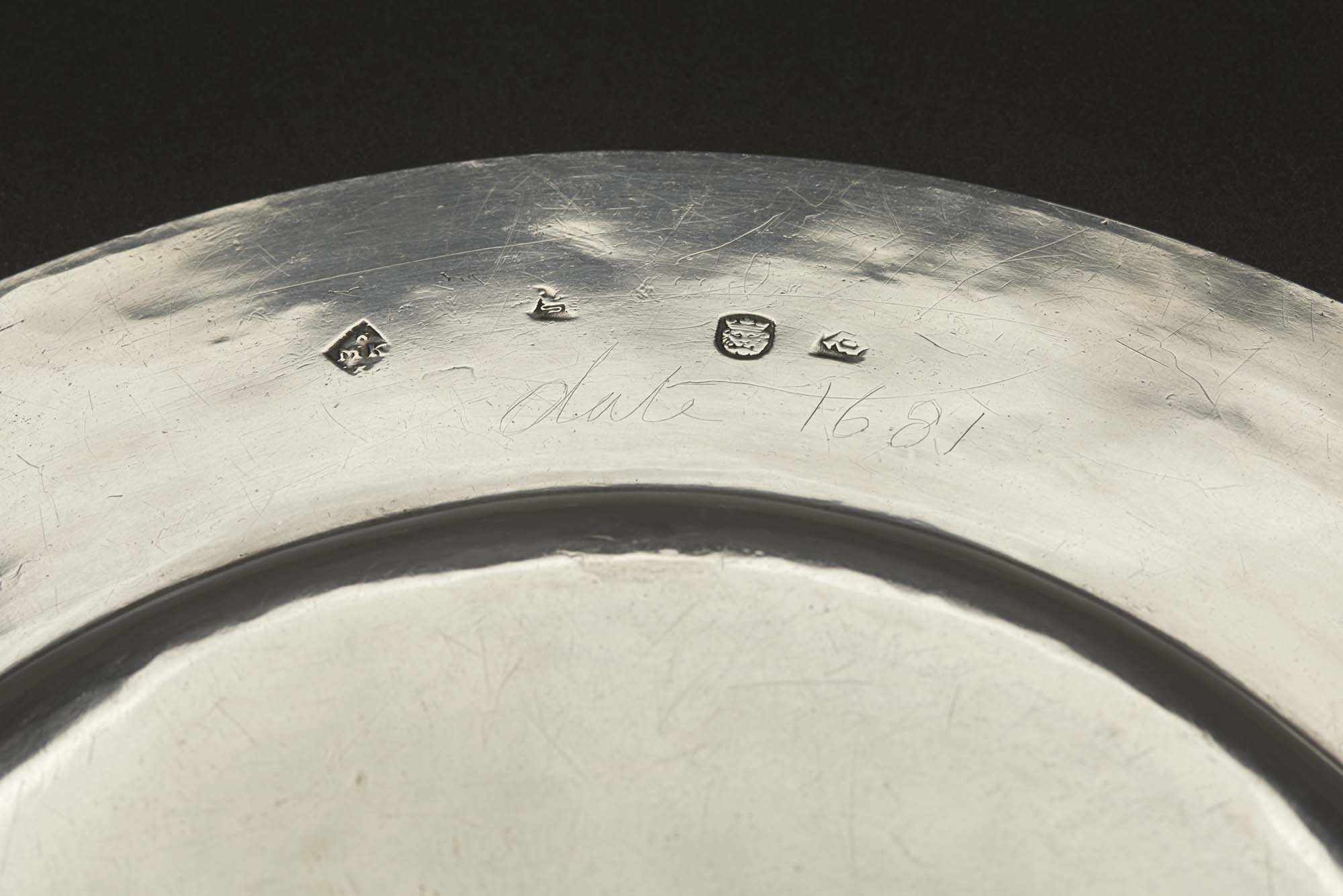 This plate belonged to the famous diarist and naval administrator Samuel Pepys (1633-1703). © Museum of London.

Britain’s most famous diarist, Samuel Pepys, is well known for his love of good food and his diaries attest to his reputation as a seventeenth century epicure.

Pepys began his diary in 1660 and amidst the unmatched detail of 17th century life, everyday observations, interactions, customs and detailed accounts of the Great Plague of 1665, the Great Fire of London, Charles II’s coronation and mentions of Sir Christopher Wren and Sir Isaac Newton among others, are numerous accounts of his many dinners.

But not only did he celebrate his long soirees at the dining table, Pepys also expressed his passion for acquiring silver and boasted that he served his guests on silver plates rather than pewter.

He also noted, rather smugly, how impressed and in awe of his collection of tableware his guests were while they dined at his home. 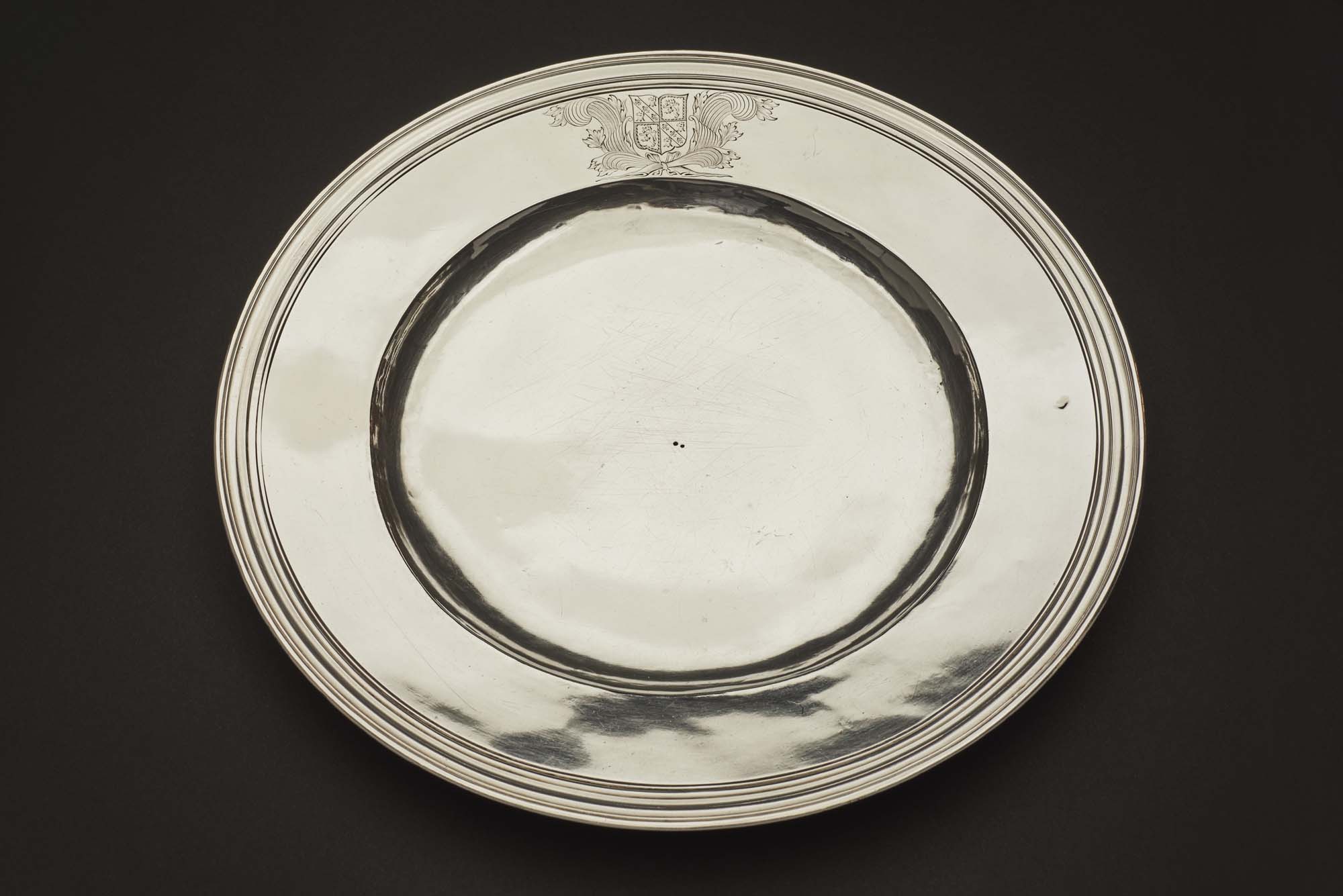 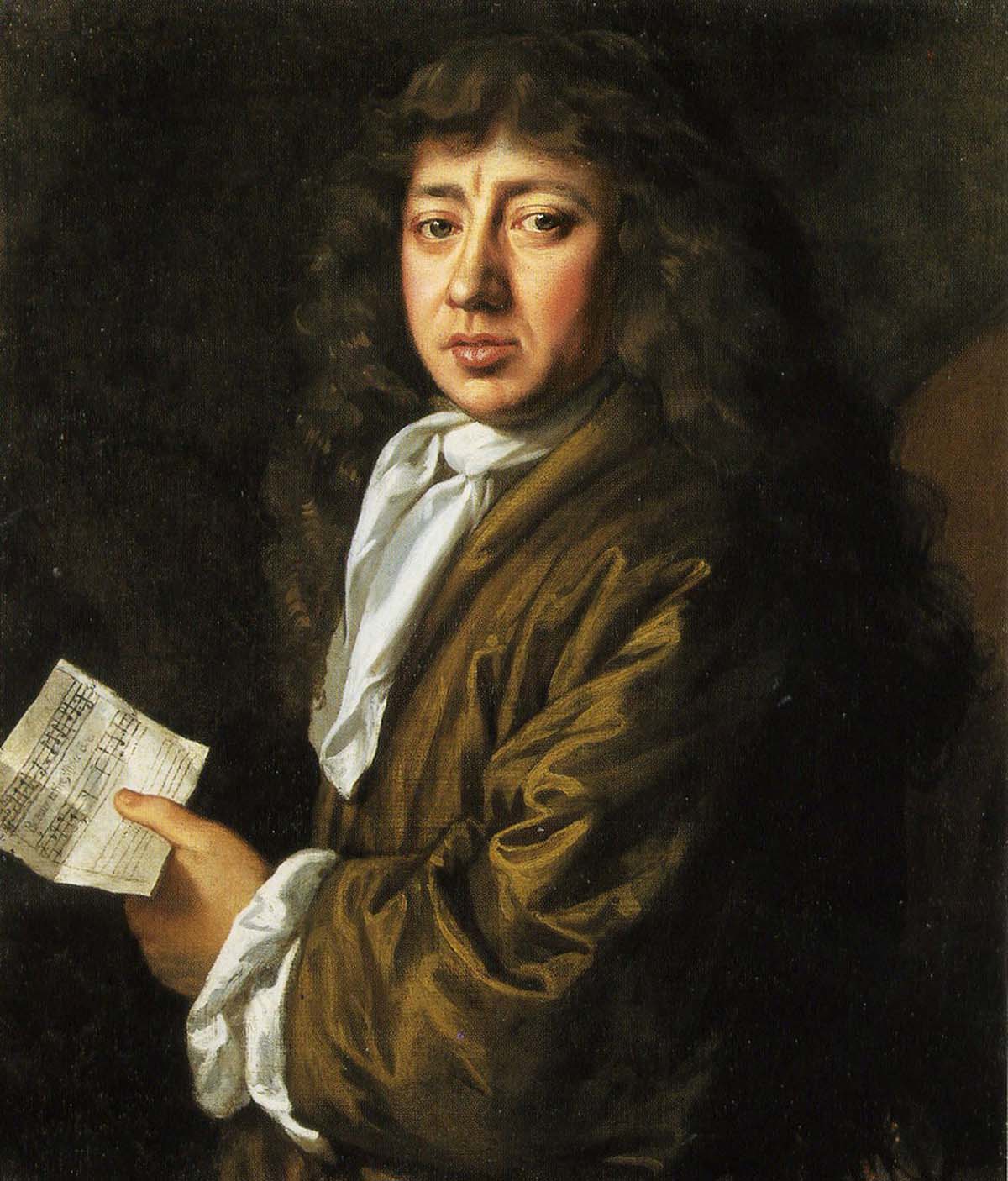 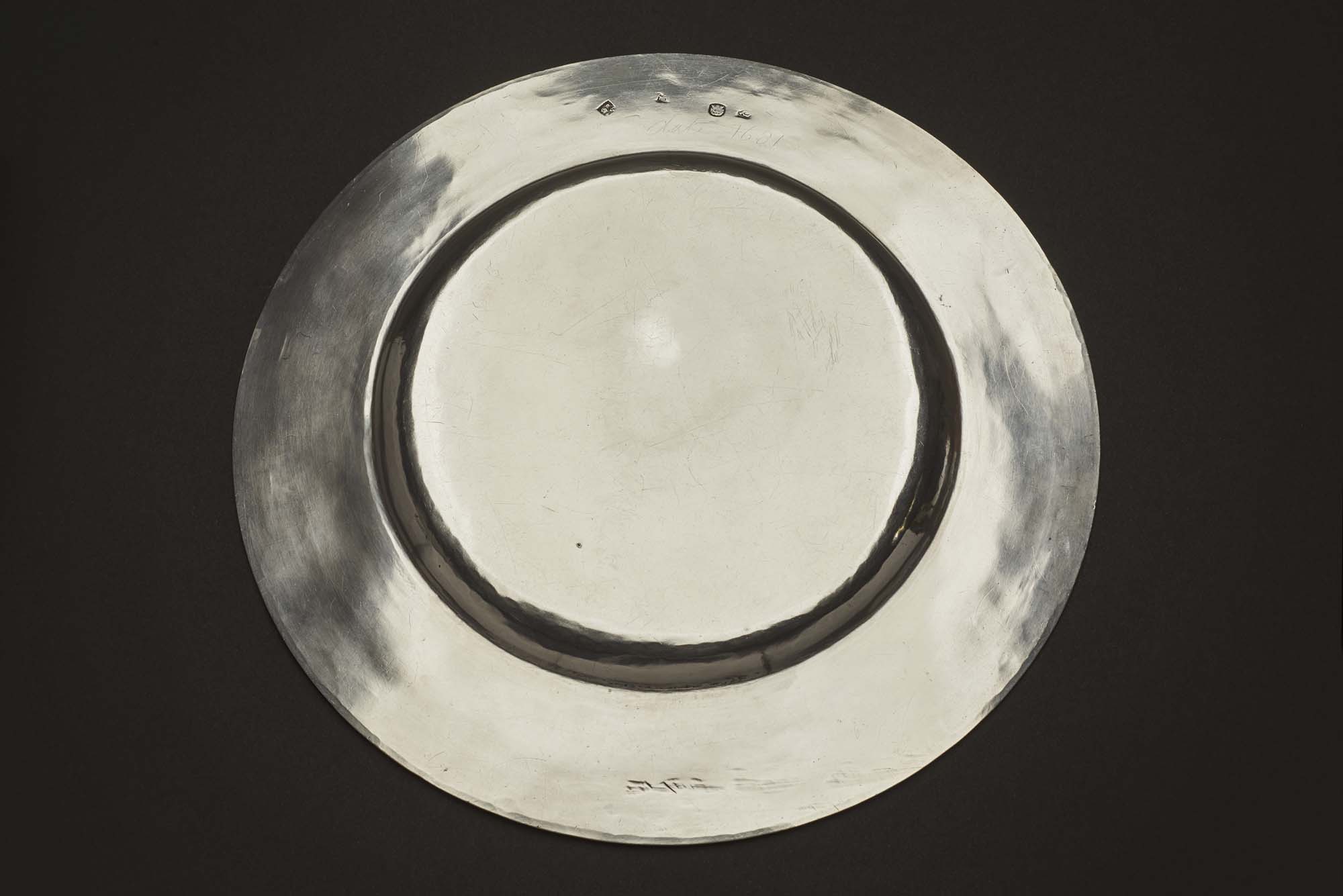 Pepys’ plate back. © Museum of London.

At the end of 1666, with the city in ruins as a result of the Great Fire, Pepys wrote: “One thing I reckon remarkable in my own condition is that I am come to abound in good plate, so as at all entertainments to be served wholly with silver plates, having two dozen and a half.”

At the Museum of London, who celebrate the Pepysian world in their War, Plague and Fire gallery, they have recently acquired one of the diarist’s much loved silver platters.

The silver trencher plate was until very recently unrecognised as relating to and bearing the coat of arms of the famous naval administrator and MP Pepys, and is one of only three items of silver plate known to have belonged to him as part of his personal collection.

Made in the workshop of Mary King in Foster Lane in 1681/2, the plate, which displays visible knife and scratch marks, is now the only one on display in the UK.

Perhaps the plate was present at the table for one of Pepys’ notorious ‘stone feasts’ – sumptuous, gout-inducing affairs which he would throw with a devil-may-care regard to fate, to celebrate the removal of a troublesome bladder stone. 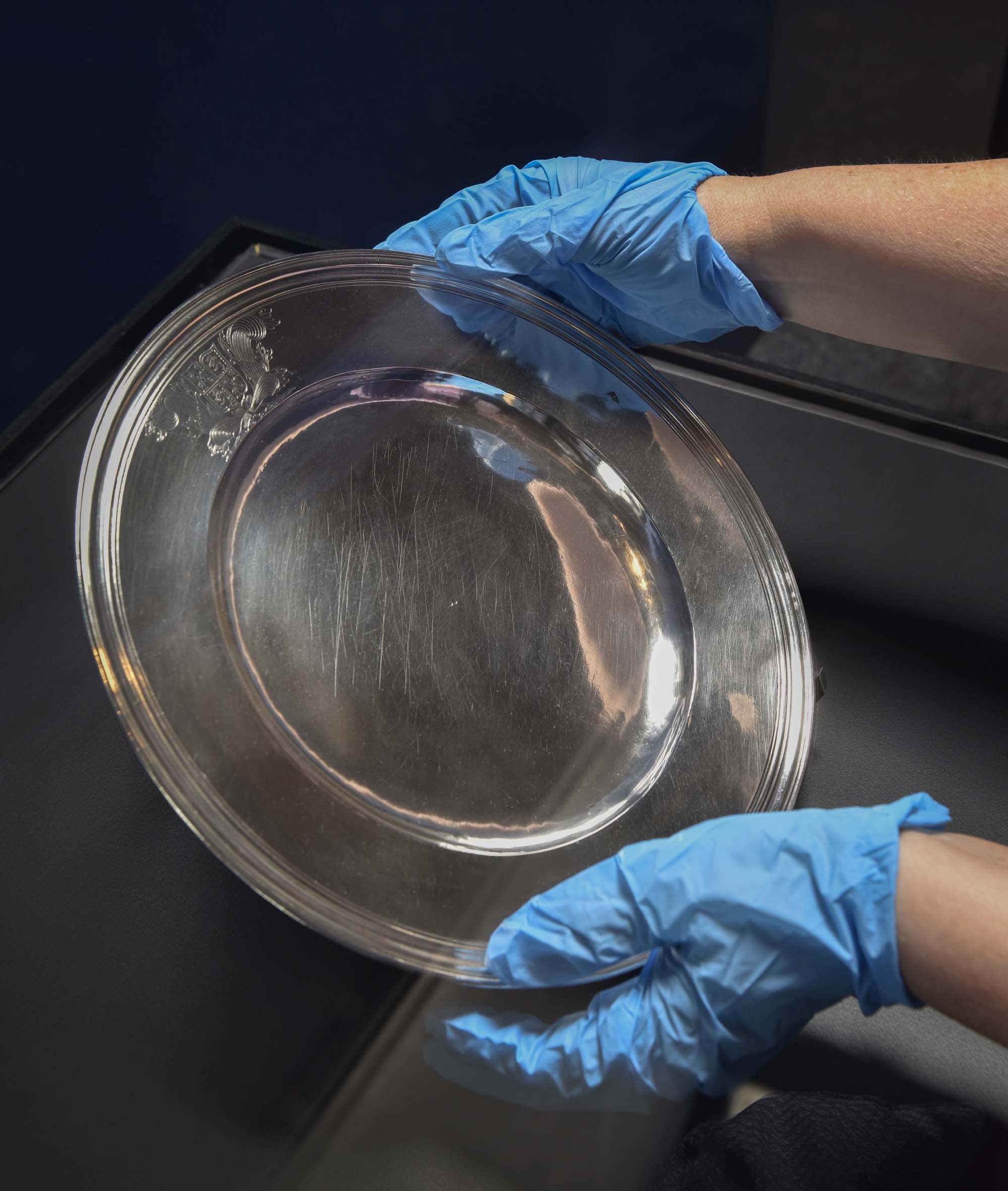 “This is a very important object as it is exceptionally rare to be able to identify the maker and the owner of a plate from this period,” says Senior Curator, Medieval and Post–Medieval at the Museum of London, Hazel Forsyth.

“The fact that it belonged to Samuel Pepys, one of the most celebrated figures in literary and English history, makes it even more special.”

See the silver plate on display in the War, Plague and Fire gallery. Admission is free.