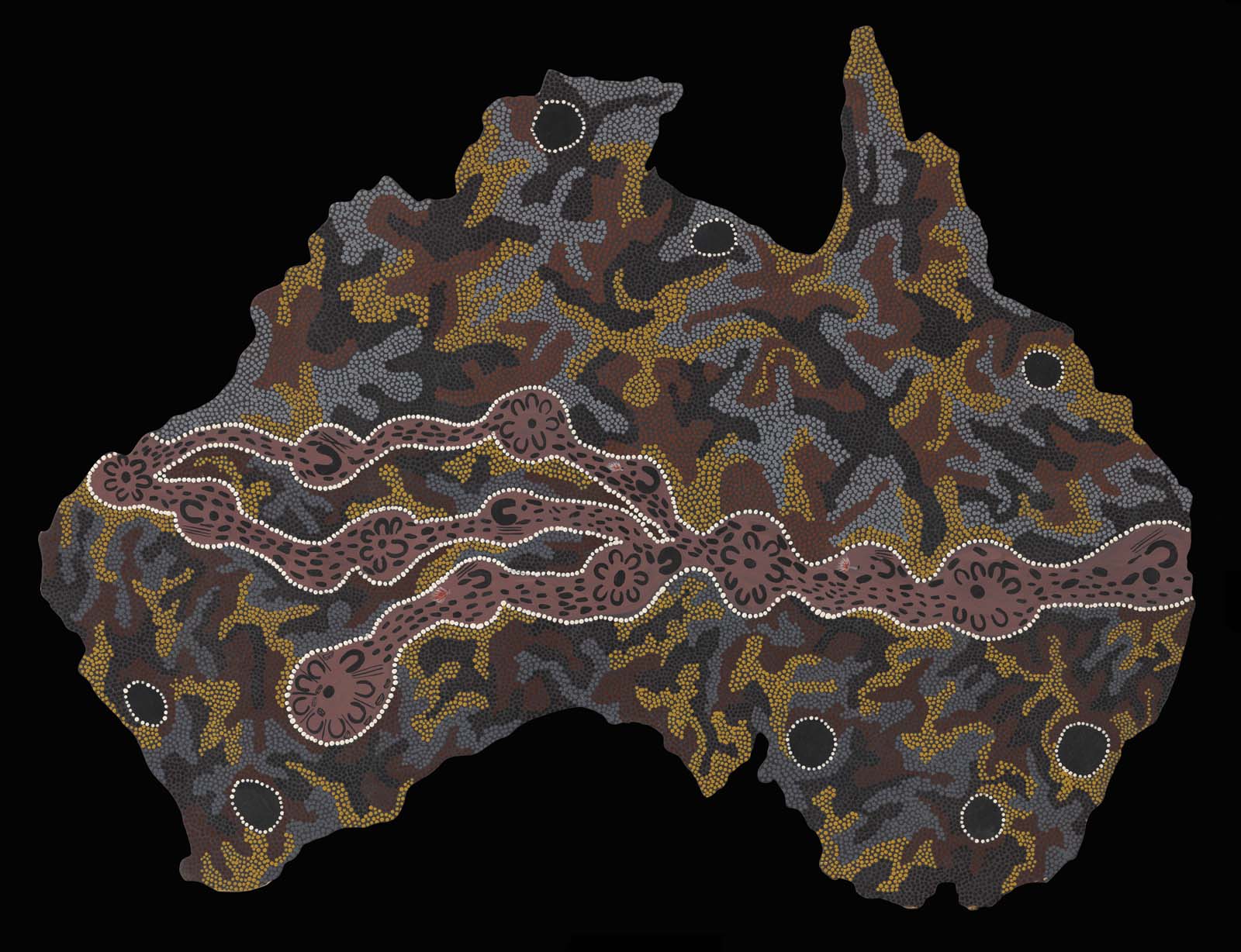 A blockbuster exhibition of Aboriginal art, history, science and belief lands in Plymouth in October

Aboriginal artists from the Central and Western Deserts will be bringing their stories and art to Plymouth this autumn when the major exhibition Songlines: Tracking the Seven Sisters lands for its inaugural European showing.

The exhibition, which was originally staged at the National Museum of Australia (NMA) in Canberra, has been widely praised as the biggest and best ever overview of Aboriginal art; thrilling visitors with its breadth, depth and understanding.

An ambitious undertaking, it features over 300 paintings and objects by more than 100 artists and its opening in PLymouth will be the first time it has been seen outside Australia.

The culmination of nearly seven years of collaboration between Indigenous communities and the National Museum, the exhibition was entirely conceived and curated by a team of First Australians, led by Margo Neale, Senior Indigenous Curator at the NMA together with custodial elders from across the Central and Western Deserts of Australia. 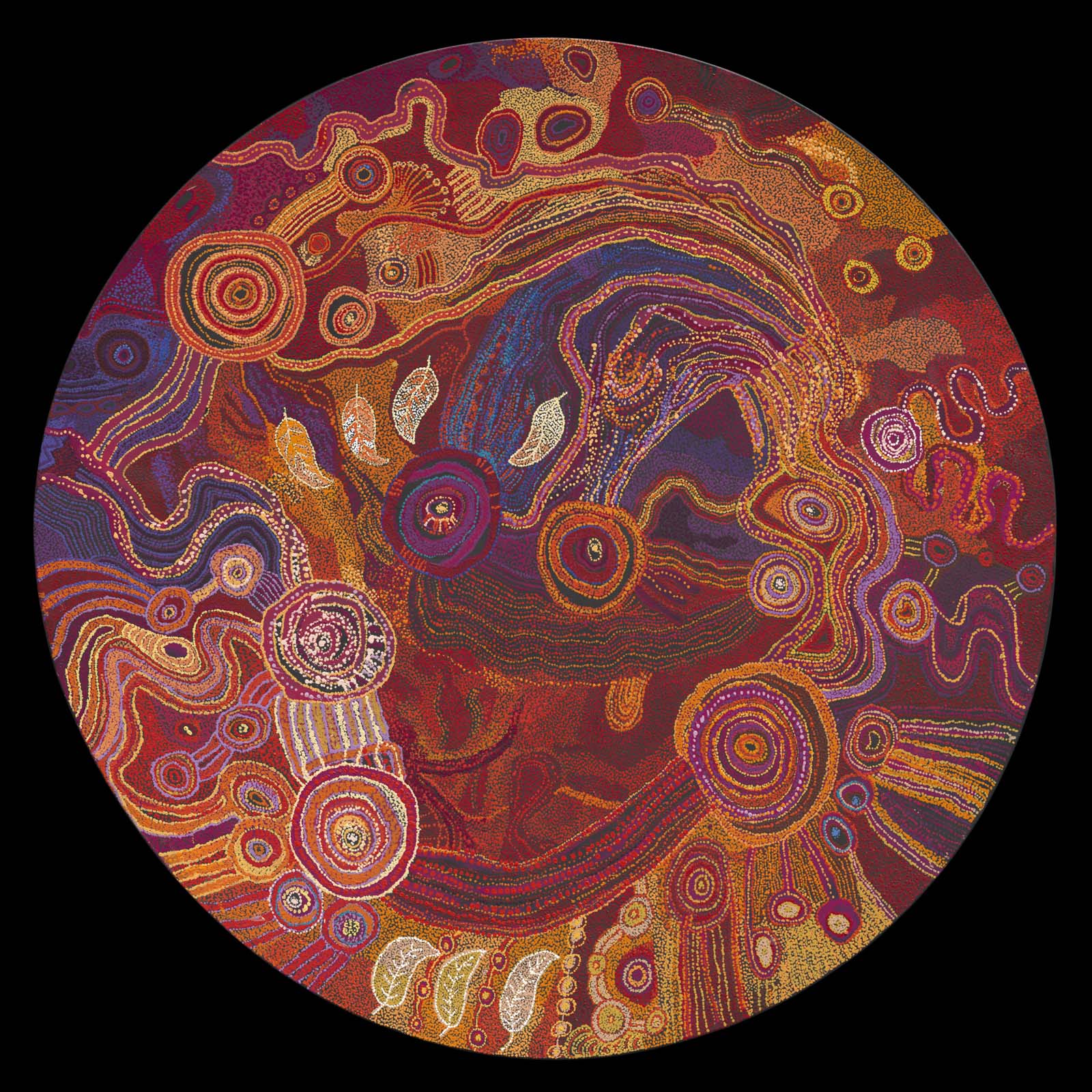 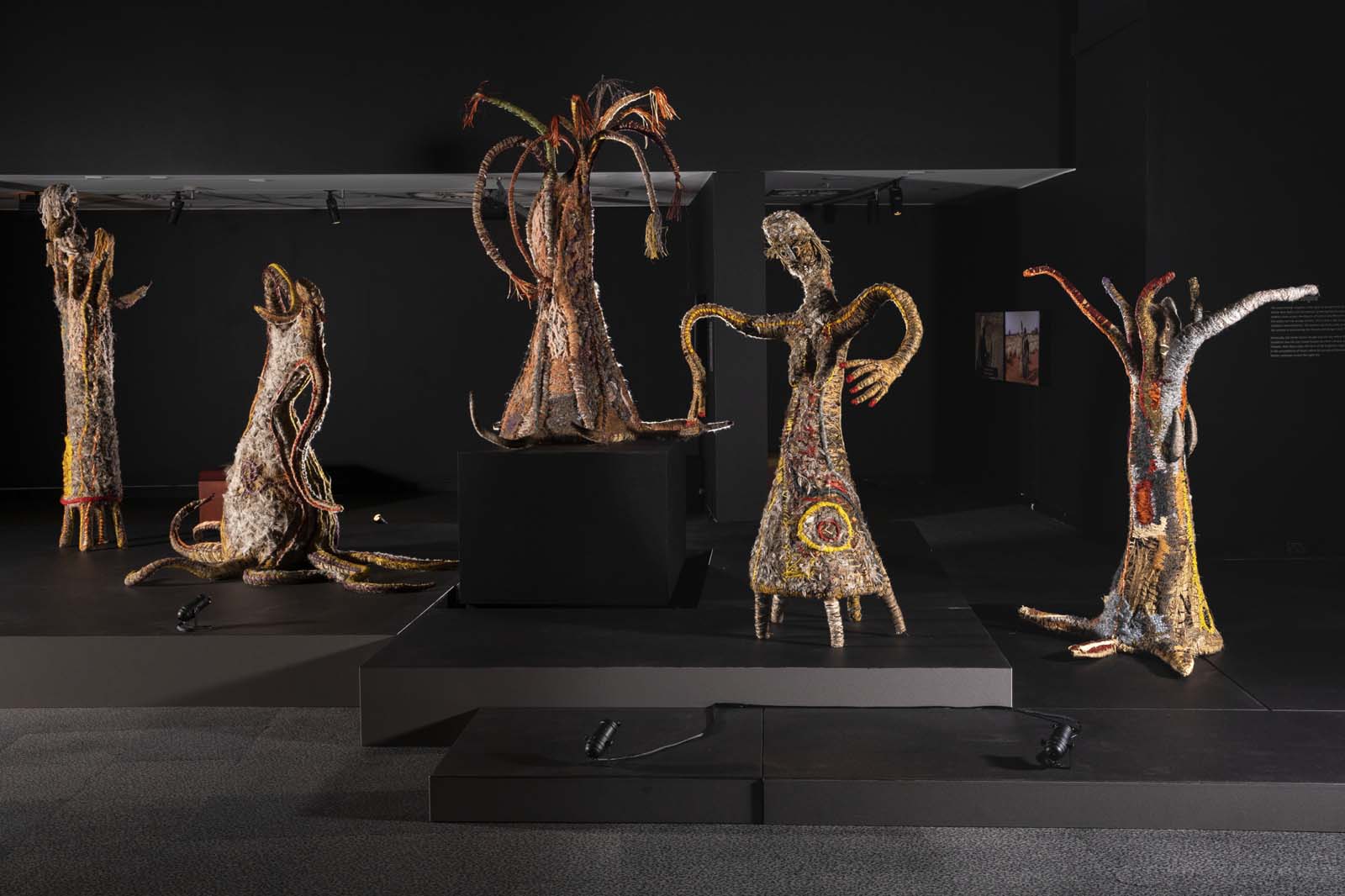 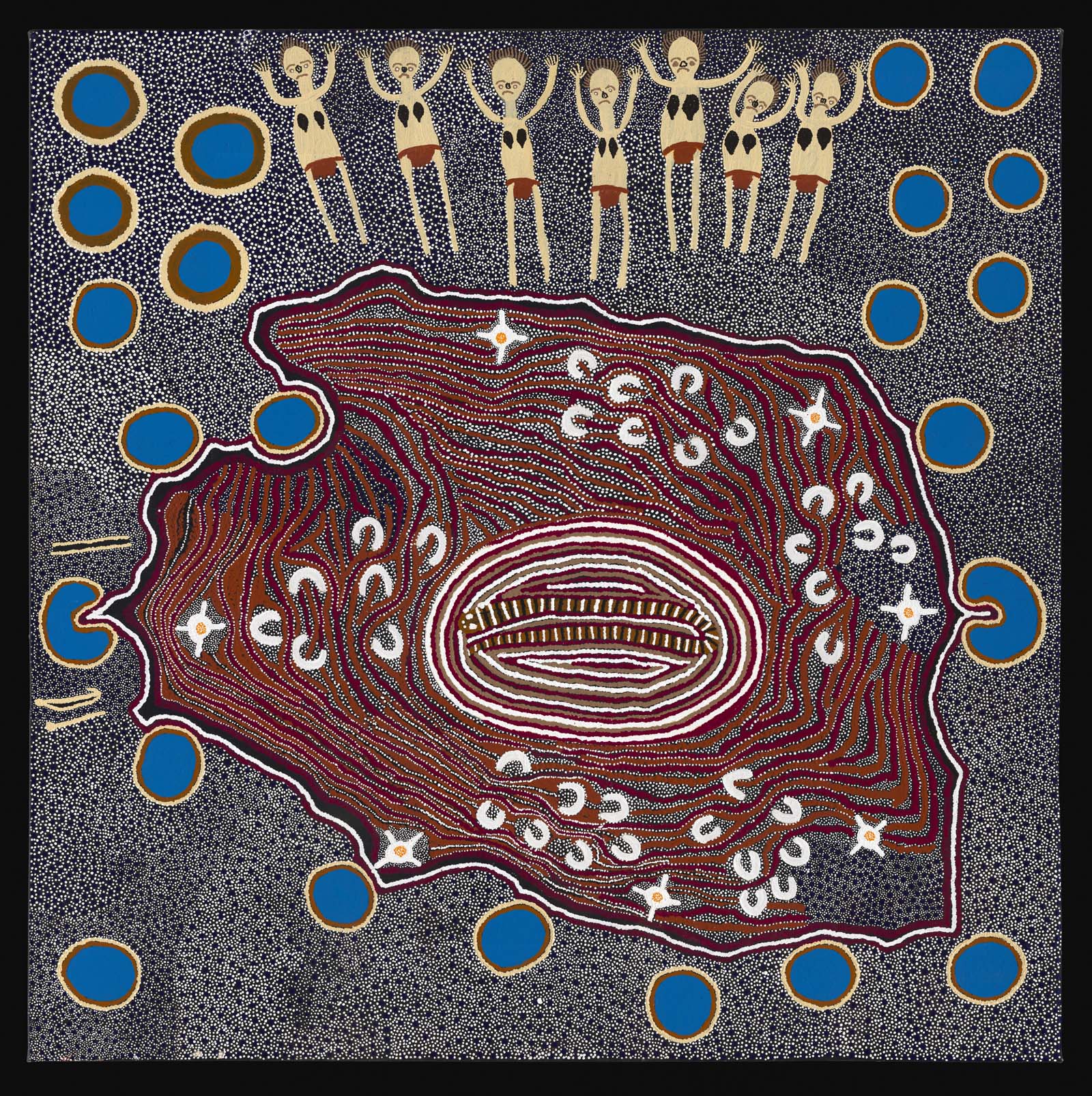 Expertly combining state-of-the art exhibition and display technologies with art, song and dance to share ancient stories from the world’s oldest continuing culture, exhibition goers in Australia have reportedly spent hours in the highly immersive display, which follows the path of the Songlines – or sacred routes of the creation ancestors who in Aboriginal belief travelled across the country creating landscapes, animals and even the laws that govern life.

In their wake they left the Songlines, which are essentially a map of the land and a pathway for complex spiritual, cultural, political and historical truths or knowledges. The Songlines comprise of stories and narratives that map the geographical features of the Australian continent, serving as vehicles for naming and locating sites critical for physical and cultural survival.

It is through Songlines that Aboriginal people can locate and learn from significant sites and pass on laws, ways of living, and moral codes to the next generation.

The seven sisters of the title refers to the specific aboriginal story of seven sisters pursued across the earth and skies by Wati Nyiru, a man who wants to seduce them. The sisters eventually come to rest in the star cluster known as the Pleiades, in the constellation Taurus. 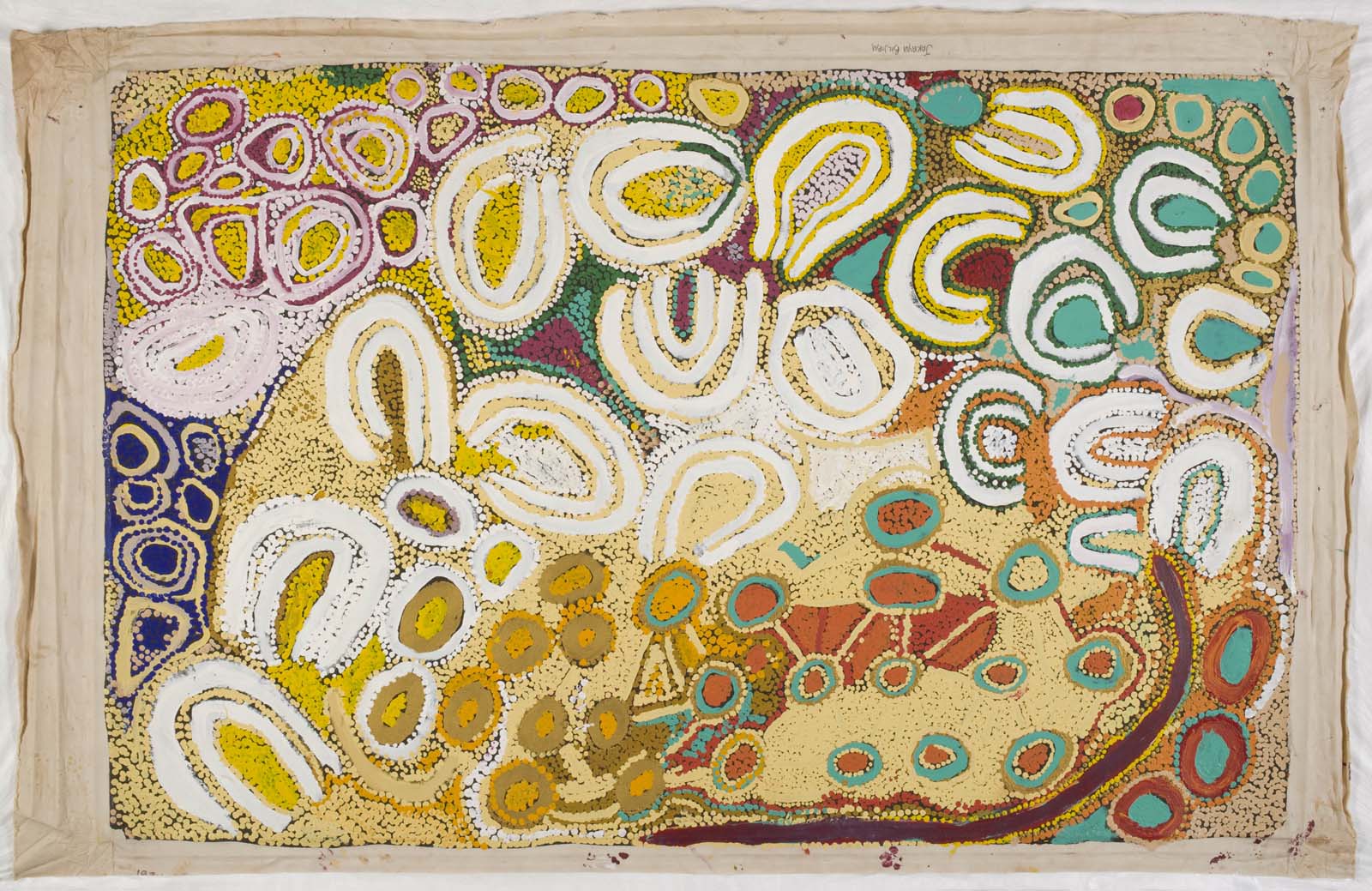 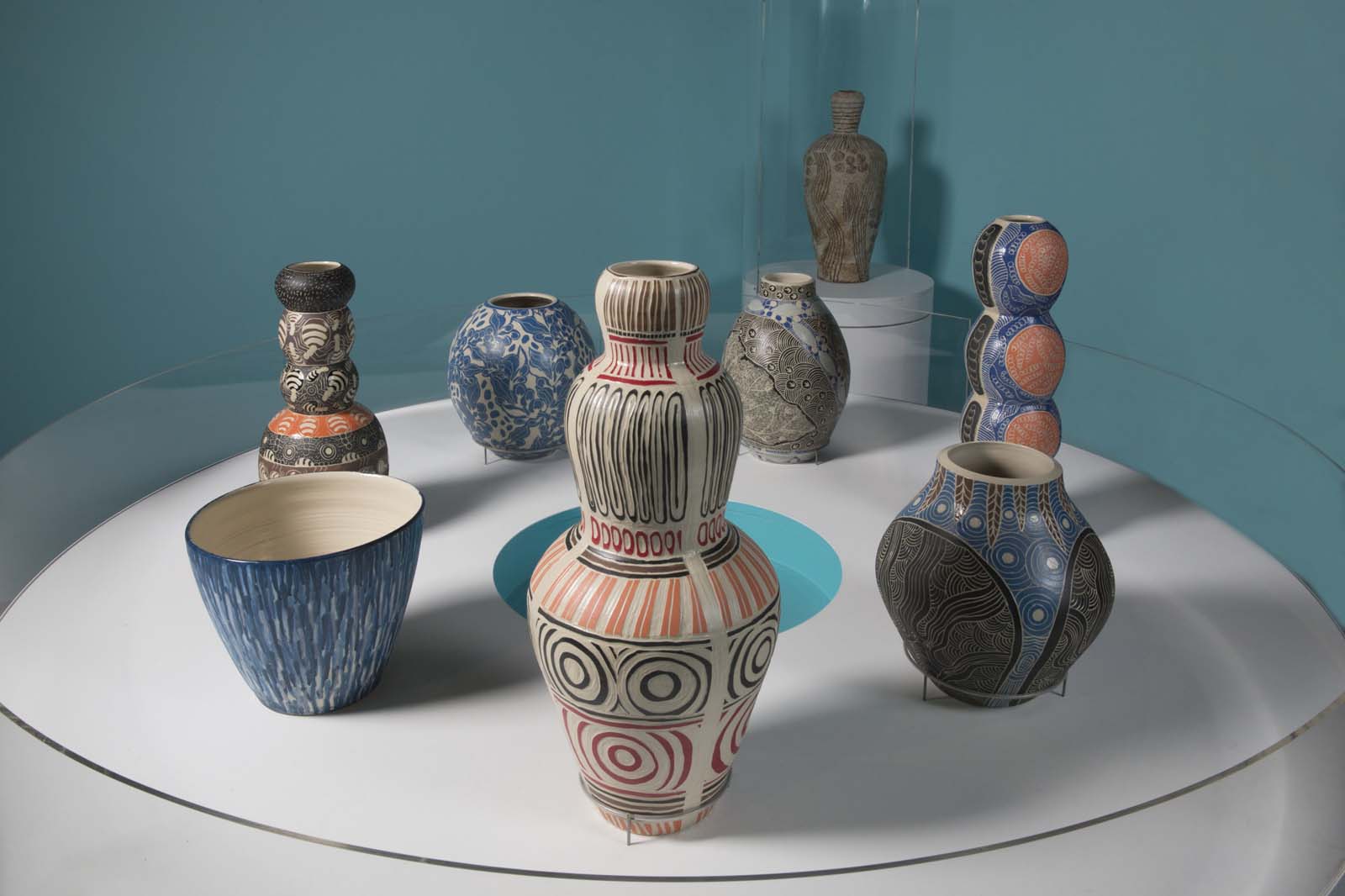 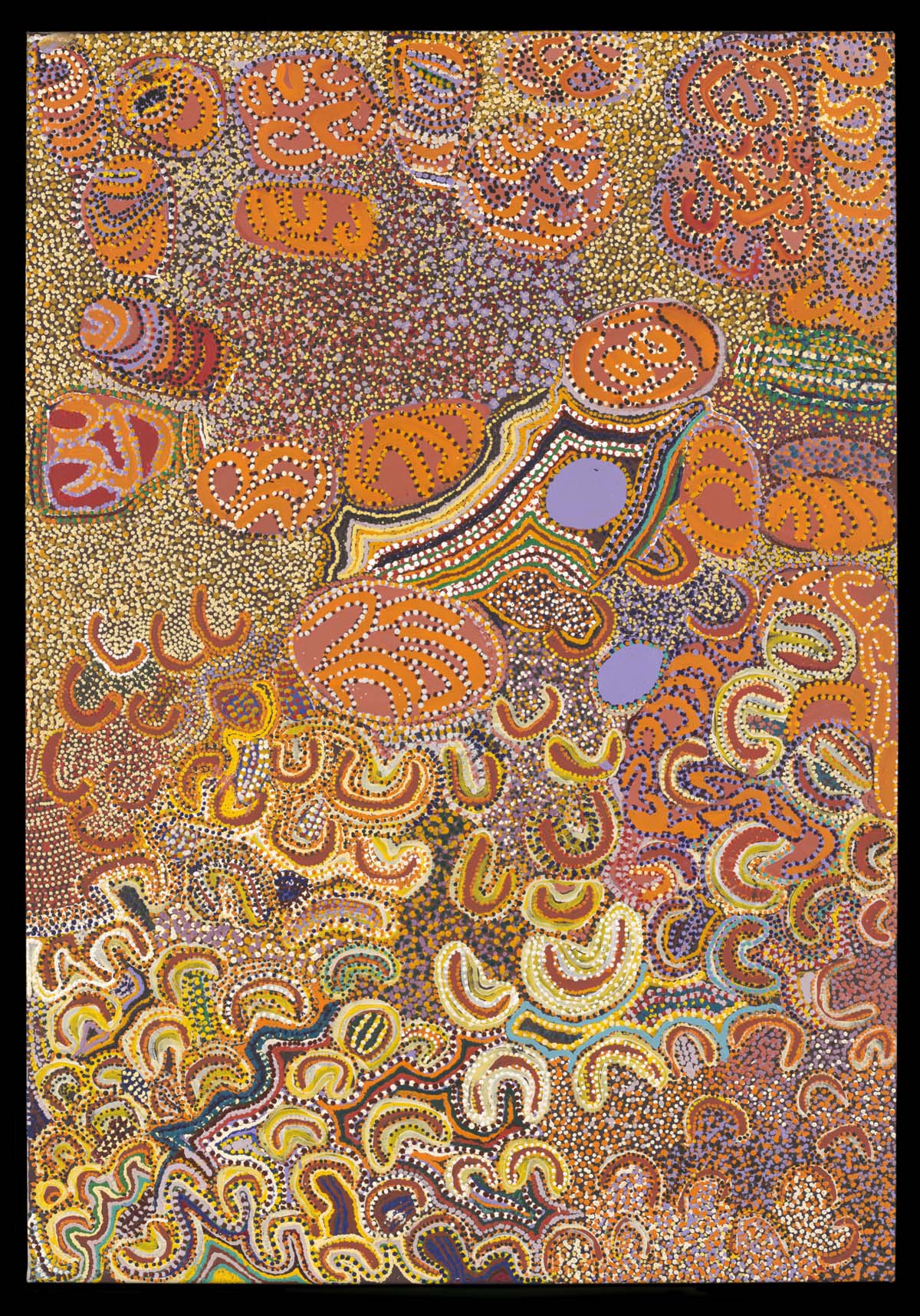 “The Seven Sisters Tjukurpa, our Dreaming creation law, is very important to us, we hold it strongly and teach it to the generations that come after us,” explains Inawinytji Williamson, Senior law woman and custodian of the Seven Sisters Songline at Kuli, Anangu Pitjantjatjara Yankunytjatjara Lands.

“This Tjukurpa travels through many people’s country: the Martu, Ngaanyatjarra, Pitjantjatjara and Yankunytjatjara lands. This really big Tjukurpa belongs to many people in the north, east, south, west and the centre. Many people tell this story in different languages. We have brought the song, story and paintings full of Tjukurpa, the creation spirit of the Seven Sisters, to put in our exhibition.

“All people, white and black, can come and see and understand”

“We want to show this major creation story here so many other people can look, learn and increase their understanding. All people, white and black, can come and see and understand. And it’s for teaching all our children, our granddaughters and grandsons — to keep the culture strong. That is why we are making this exhibition so everyone can see and understand that our Tjukurpa law stands strong today.”

The epic journey that unfolds in the gallery traverses three states, three deserts and some 500,000 square kilometres, travelling from west to east: from the Western Australian coast to the APY Lands in the east, using the power of contemporary art, performance and song to re-animate traditional stories. Photography, multimedia and the world’s highest-resolution seven-metre-wide travelling dome also play their part in the success of the exhibition. 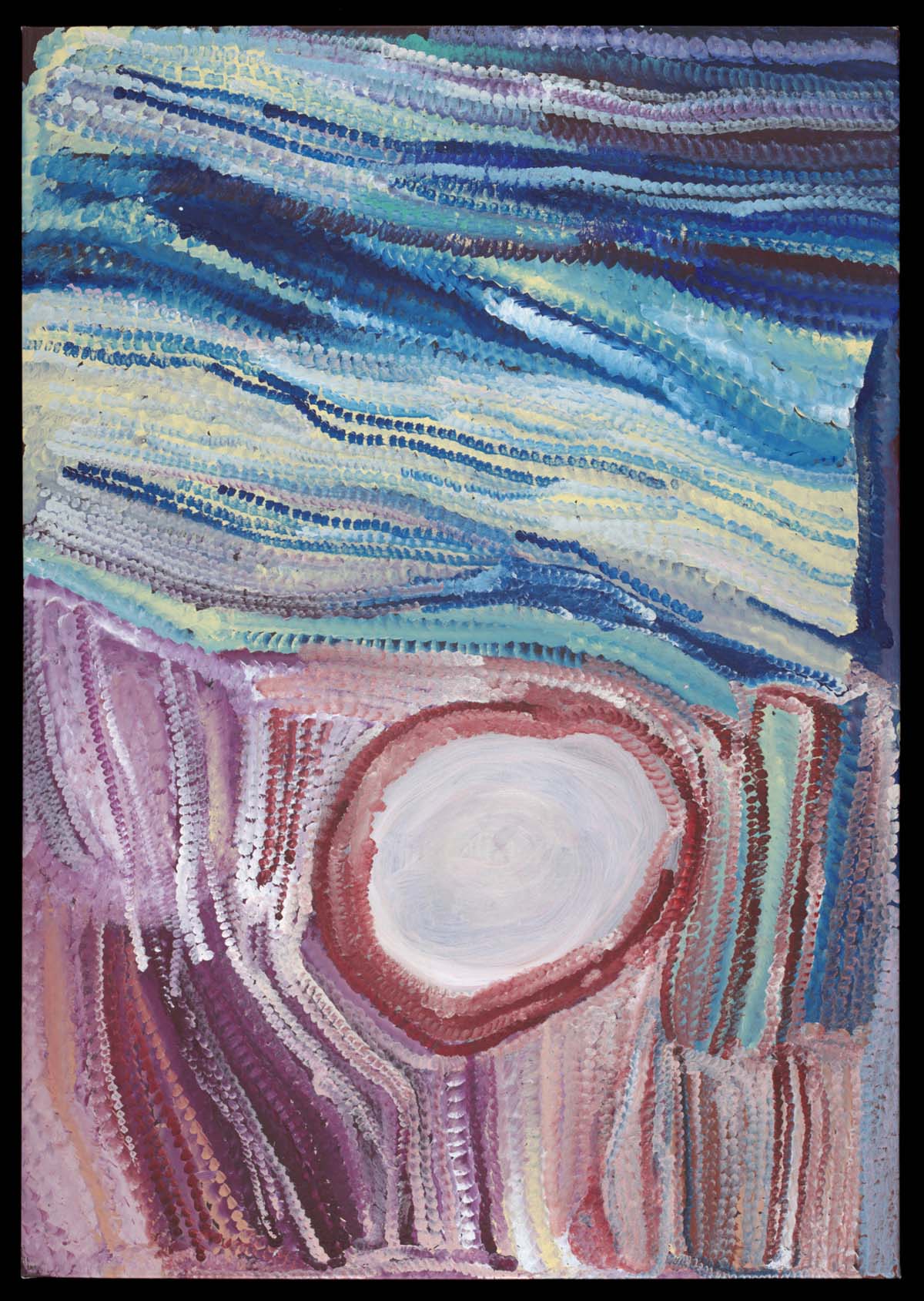 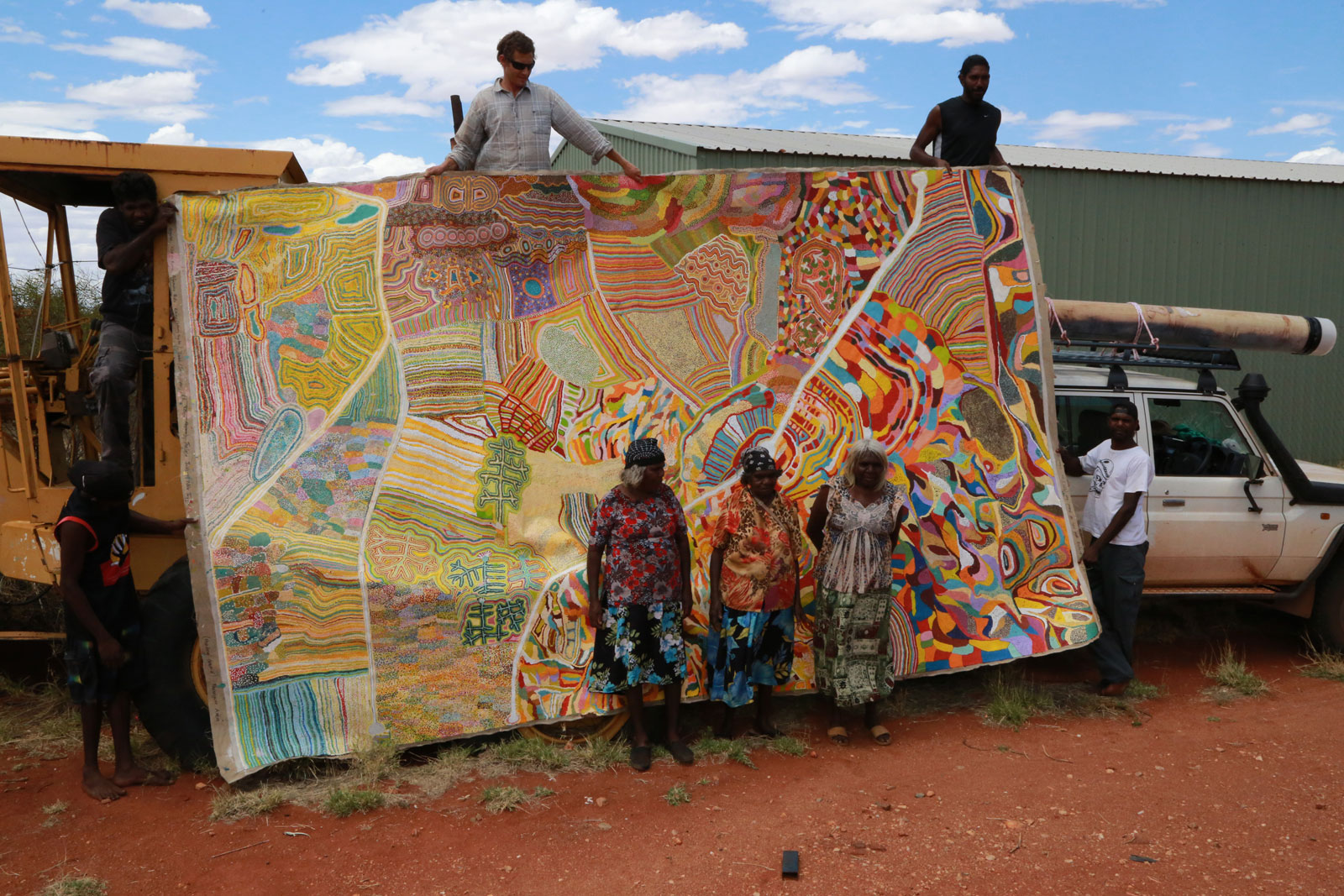 The ‘Dome Lab’ transports viewers to places deep in the desert relating to the Seven Sisters Songlines and even explores the remote Cave Hill site in South Australia – home to the only known Seven Sisters rock art in the world – as well as showing animated artworks and their relationship to the stars and constellations.

“For Aboriginal people, Songlines are our foundational stories about the creation of the Australian continent,” says Margo Neale. “This exhibition was initiated and co-curated by Indigenous communities who wanted to both preserve their culture for future generations and to share their stories with all Australians and the world — this is the model for future Museum-Indigenous community collaborations going forward.

“Songlines: Tracking the Seven Sisters is not an art exhibition, a history exhibition or a science exhibition,” she adds. “It is all of these. It is both an Australian Aboriginal exhibition and a universal story of humankind. It offers us connectivity to each other and our planet in a fragmenting world. It is of critical importance that the deep truths and lessons in this exhibition are seen worldwide.”

The Box’s presentation of the exhibition continues the museum’s track record of collaborating with First Peoples around the world and follows recent exhibitions co-curated with the Wampanoag of North America – Mayflower 400: Legend & Legacy as well as Wampum: Stories from the Shells of Native America. 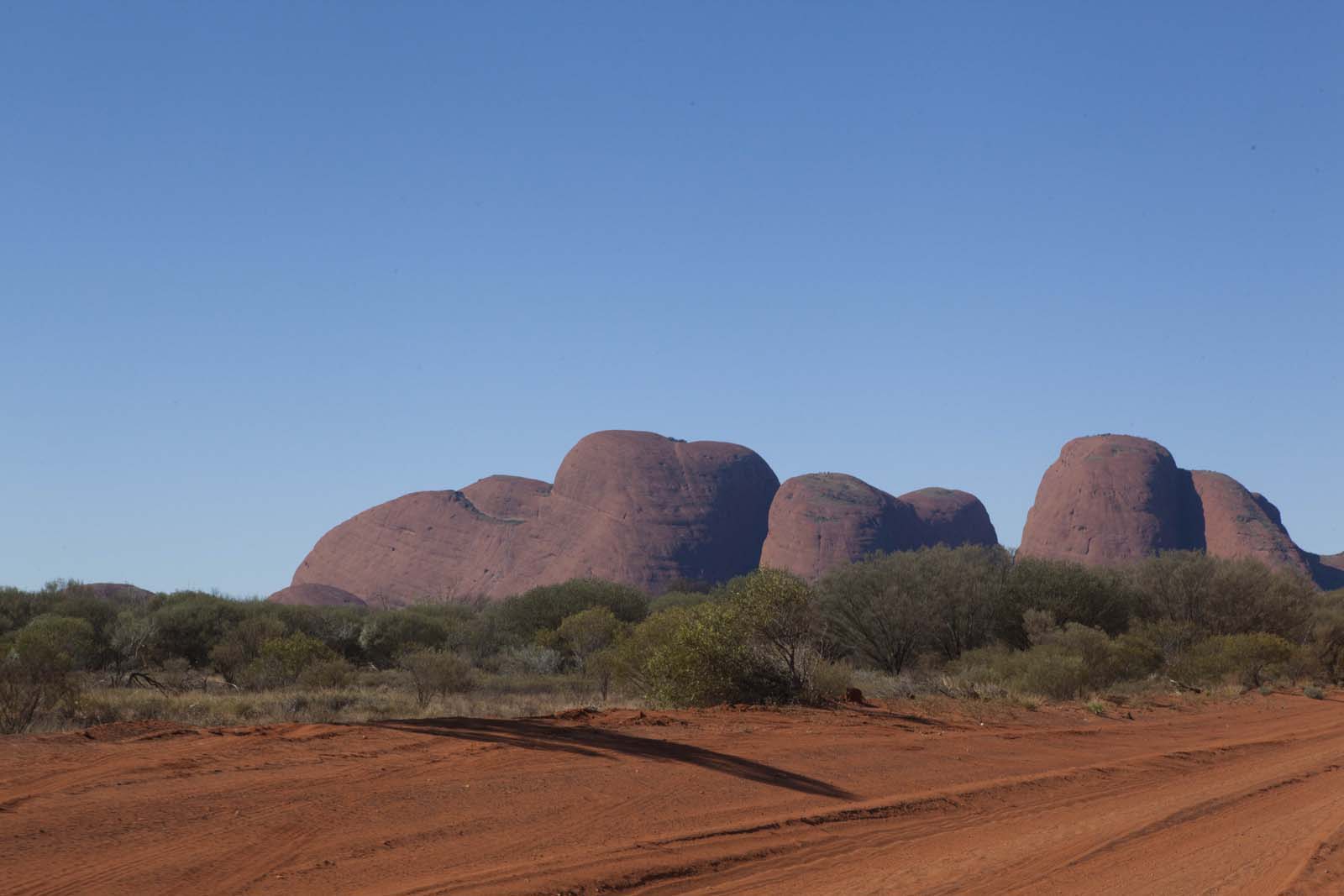 Songlines is part of the UK/Australia Season 2021–22, a joint initiative by the British Council and the Australian Government’s Department of Foreign Affairs and Trade.

Through the theme ‘Who Are We Now?’, the Season aims to explore and reflect on the relationship between Australia and the UK across the arts, creative industries and higher education and will celebrate the diversity of cultures and languages in both countries.

Songlines: Tracking the Seven Sisters is at The Box in Plymouth from 21 October – 27 February 2022

The Box is a new cultural and heritage complex that completely transforms, extends and combines the original City Museum, Art Gallery and Central Library buildings and restores St Luke’s Church, to create new galleries, a striking elevated archive, learning and research facilities and the first public square to be built…