The Ancient Egyptians are well known for their innovative everyday lives and their famously extravagant death rituals. Millions of Ancient Egyptian artefacts have made their way to the UK thanks to the efforts of early archaeologists, travellers and enthusiasts. Here is our pick of some of the best places to see these amazing objects 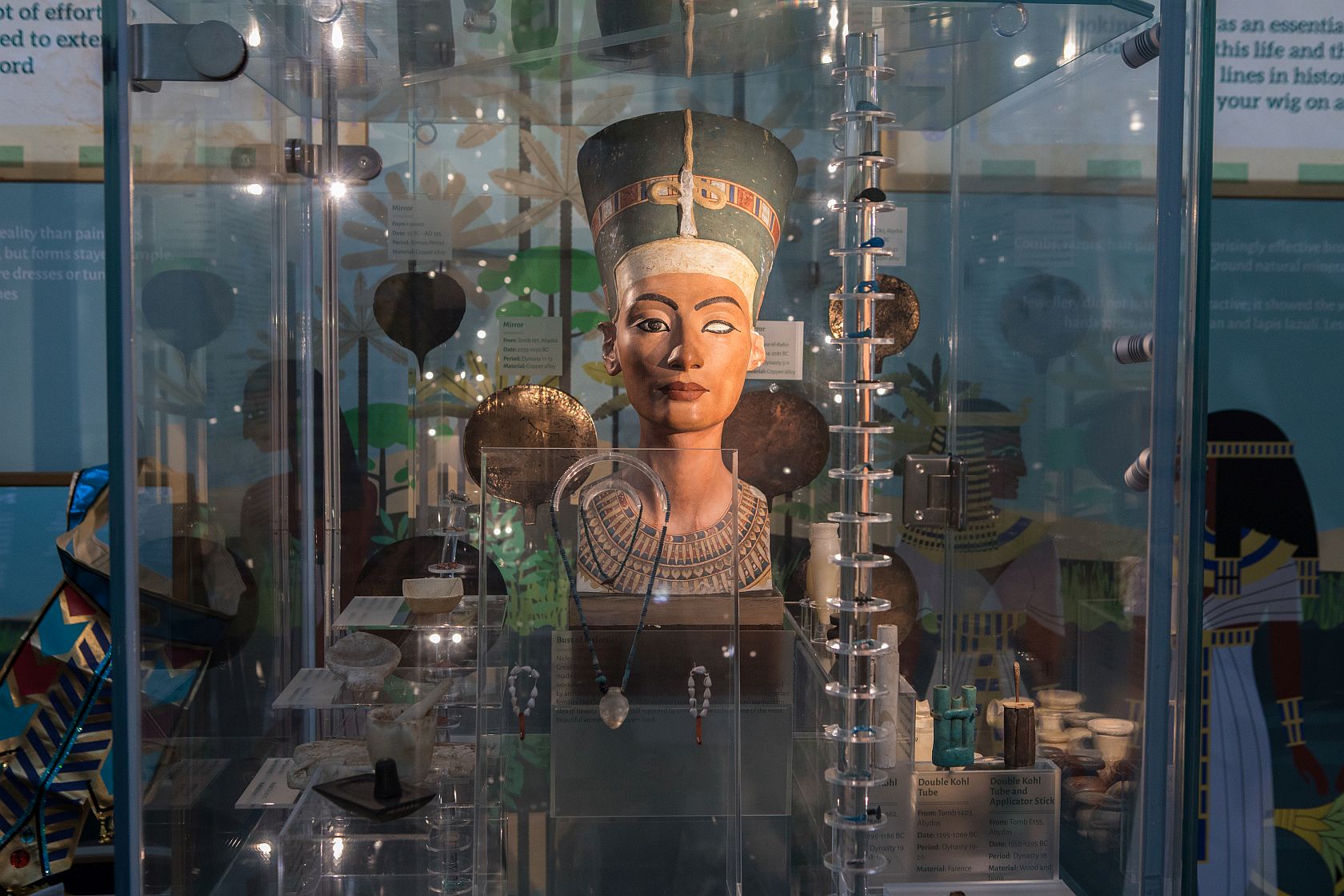 One of the country’s most important collections of verified Ancient Egyptian artefacts, Bolton Museum’s Egyptology collection benefited hugely from the work of Boltonian Annie Barlow in the late 1800s. Barlow was a top fundraiser and regional secretary for the Egypt Exploration Fund which helped fund British-led excavations in Egypt. This relationship brought more than 12,000 artefacts to the city, including a significant collection of ancient textiles.

The museum’s newly-refurbished Egyptology galleries celebrate the colour and vibrancy of Ancient Egypt, and objects on show include highly decorated funeral masks, carved stone columns and vibrant ceramics as well as clothing, jewellery and everyday items.

The galleries have at their heart an awe-inspiring full-scale recreation of the tomb of Thutmose III, which was first discovered in the Valley of the Kings in 1898. The chamber, which houses Bolton’s famous mummy thought to be of royal descent, is covered with illustrations depicting the 12-hour journey to the afterlife that Ancient Egyptians believed the deceased would embark on. 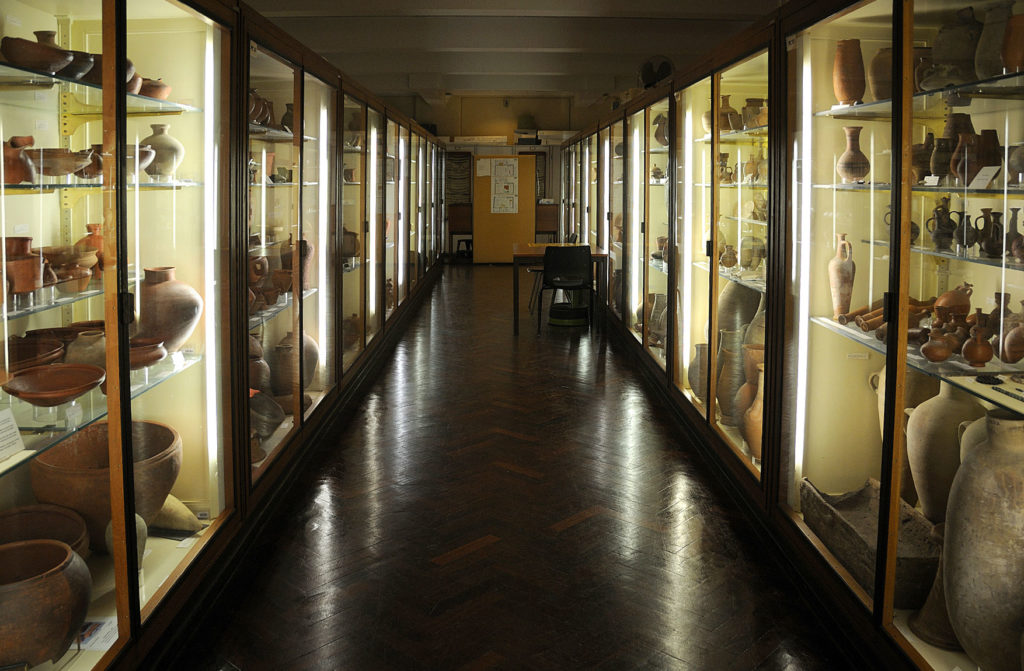 The interior of the Petrie Museum, London. Courtesy UCL

With an 80,000-strong collection, UCL’s Petrie Museum of Egyptian Archaeology has some of the most incredible Ancient Egyptian and Sudanese artefacts ever uncovered. The museum was established in 1892 as a resource for students, with the initial collection donated by writer and Egyptologist Amelia Edwards.

This group of objects grew into one of the leading collections outside of Egypt when the university purchased finds by pioneering archaeologist Sir William Matthew Flinders Petrie, whose systematic and comprehensive recording and studying of artefacts revolutionised the science of archaeology.

Collection highlights include the Tarkhan Dress – a linen shirt made between 3482-3102 BC, excavated from the important Tarkhan cemetery and thought to be the world’s oldest woven garment; and mummy masks and painted portrait panels dating from the period of Roman rule of Egypt. 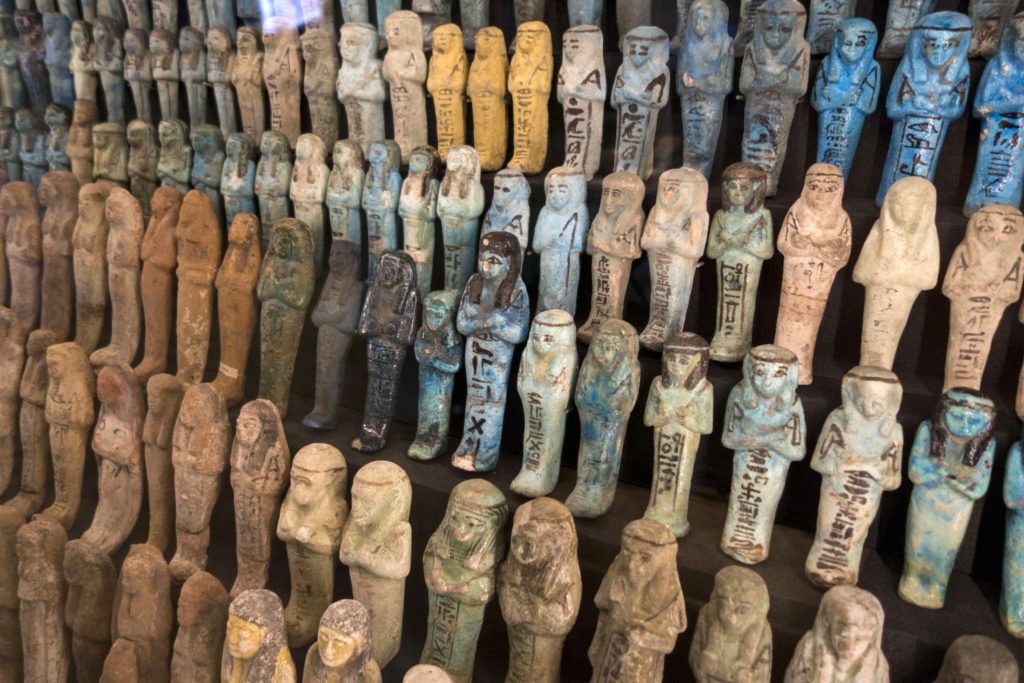 Shabti Figures at the Manchester Museum © Bryan Ledgard (CC By 2.0)

The museum’s impressive collection of both Egyptian daily life and afterlife artefacts comprises over 18,000 objects, ranging from prehistoric times, through to Roman, Christian and Islamic eras.

Collection highlights include seventy human and animal mummies; an outstanding collection of painted panel portraits; and ritual objects from Thebes. 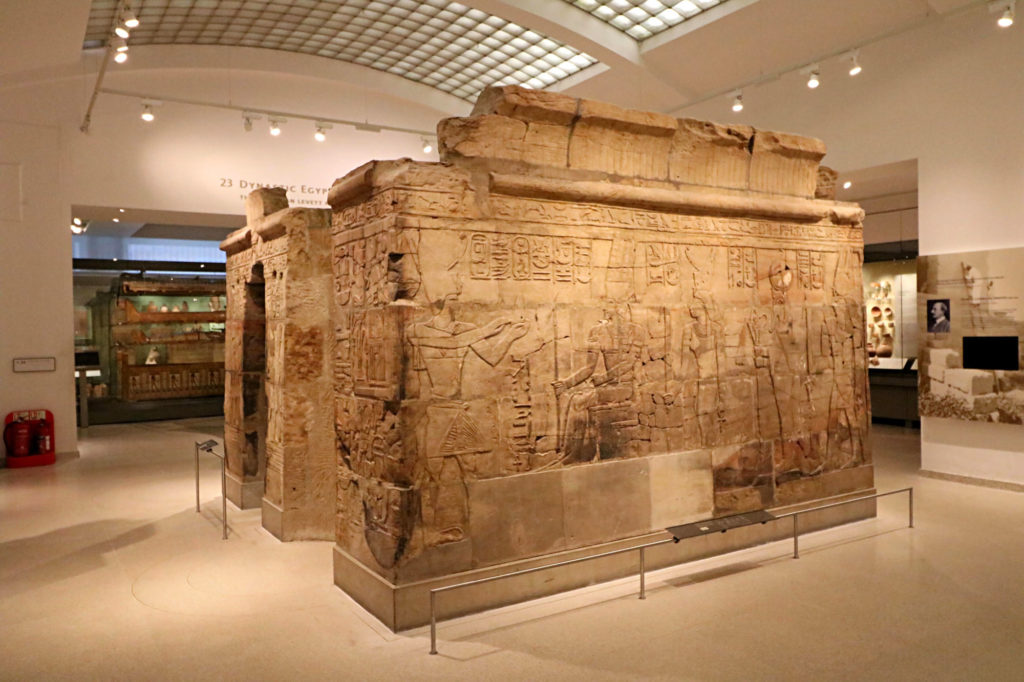 The Ashmolean’s innovative galleries of Ancient Egypt and Nubia cover a huge range of themes related to Egyptology, including the civilisation’s origins, its dynasty, and its relationship with neighbouring cultures, through to rituals surrounding death and the afterlife.

The collection of over 40,000 artefacts, acquired over 300 years with help from Flinders Petrie and Professor Francis Llewellyn Griffith, is one of the finest collections in the world. The galleries centre around a particularly incredible object, the Shrine of Taharqa – the only complete freestanding pharaonic building anywhere in Britain.

Collection highlights include enormous limestone statues of fertility god Min, dating from 3300 BC; wall paintings depicting the daughters of Akhenaten and Nefertiti; and the mummy of Theban priest Djeddjehutyiuefankh. 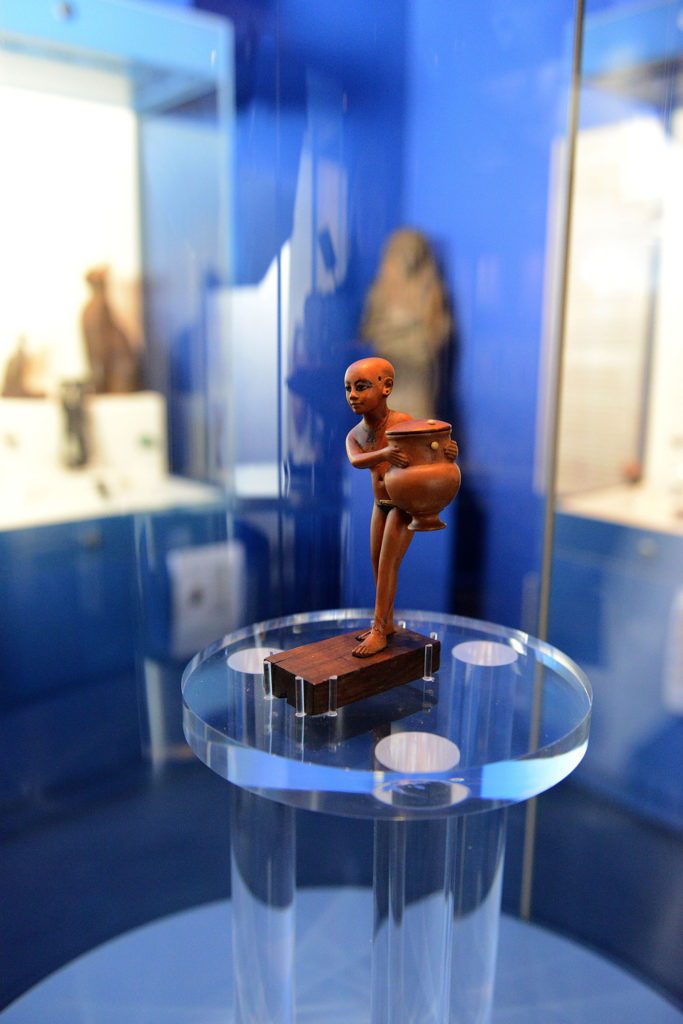 Part of Durham University, the Oriental Museum has a fantastic collection of more than 23,000 Far East and Asian artefacts. The Museum’s Ancient Egyptian collection, numbering more than 7,000 objects, spans thousands of years – from the Pre-Dynastic period to the Coptic period. The collection’s first objects came via the Fourth Duke of Northumberland, Algernon Percy, who developed a fascination with Egypt after a visit, and began to amass artefacts from British auctions until his collection grew well into the thousands.

Collection highlights include Ancient Egyptian funereal objects including an 18th dynsasty funeral mask and a shabti figurine of Prince Bahmery; and a statue of Paser, the highest official during the reign of Ramesses II. 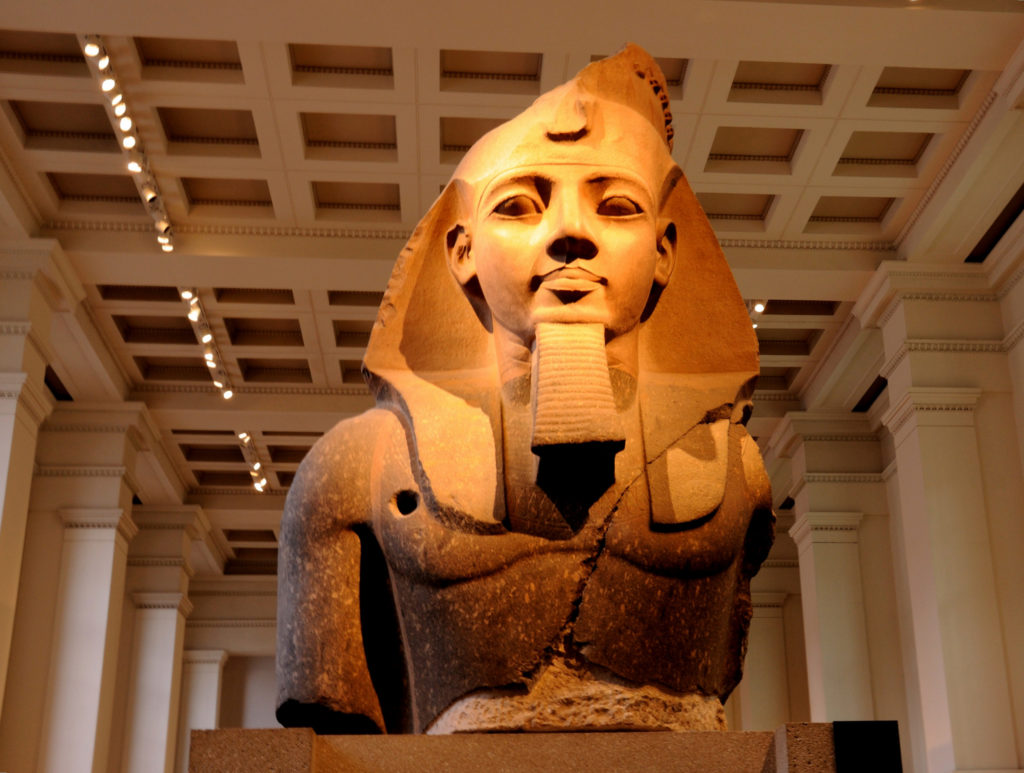 The British Museum is of course the place to go for anything relating to human history, archaeology or ethnography. The museum’s Ancient Egypt and Sudan collection, holding over 100,000 artefacts, is one of the largest and most comprehensive found anywhere in the world, rivalled only by the Egyptian Museum in Cairo.

Collection highlights include the Rosetta stone, which has been on display at the museum almost continuously for over 200 years.  The discovery of the stele during the Napoleonic Wars, which is inscribed with three versions of a decree written in Ancient Egyptian hieroglyphics, Ancient Greek and Ancient Egyptian Demotic script, was a breakthrough in deciphering hieroglyphics.

The Garstang Museum of Archaeology
Liverpool 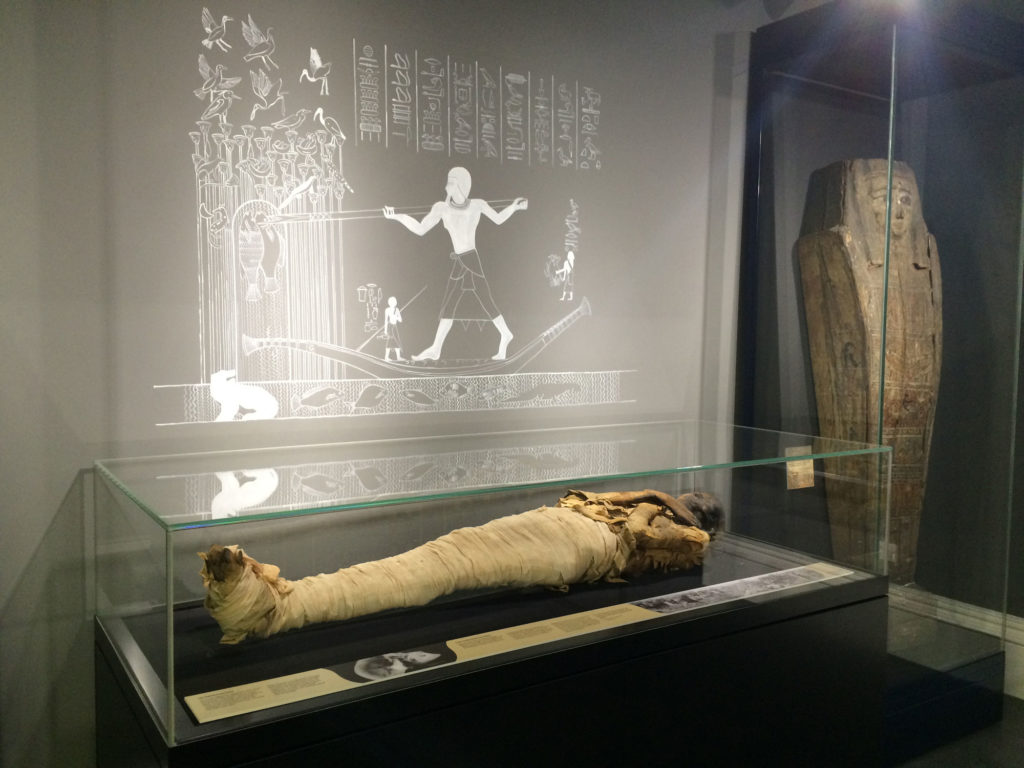 The Garstang Museum, named after Professor John Garstang – a British archaeologist working in the Middle East in the early 20th century and a pioneer in the development of archaeology as a science, has a wonderful collection of Ancient Egyptian and Sudanese artefacts, with much of the collection coming from Garstang’s own excavations.

Garstang’s excavations focused on ancient cemeteries, so many of the objects he brought back relate to funerals and the afterlife. One of these artefacts was an ancient mummy, dating to around 1000BC. The mummy was moved to the University’s anatomy department for safe keeping during the Second World War, when the city suffered devastating bomb damage. While at the anatomy department, the preserved remains took part in the trials of new scanning techniques, before they were used to study the mummy of King Tutankhamun.

Collection highlights include a gold heart scarab – an object inscribed with magical texts designed to prevent the heart from betraying the owner in the afterlife, the earliest known example ever found; a vividly painted coffin from the site of Beni Hasan, dating to the Middle Kingdom; and an internationally important collection from Nubia, including a striking collection of lion statues. 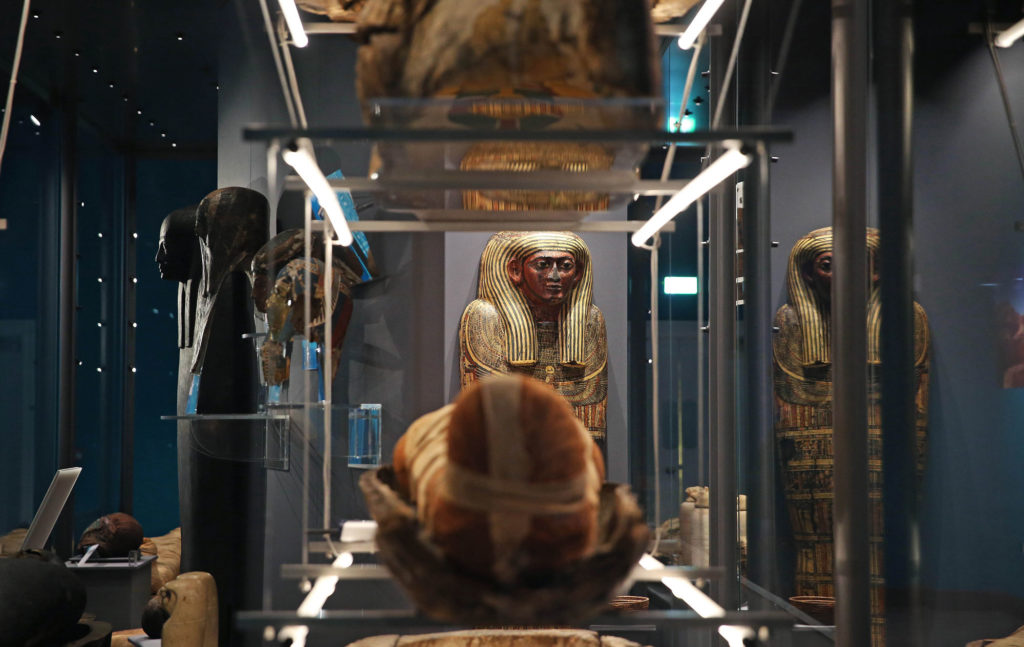 Liverpool’s World Museum has the largest Ancient Egyptian gallery after the British Museum, with objects representing more than 5,000 years of history. A large number of high quality artefacts were donated to the museum by local goldsmith and antiquarian Joseph Mayer in the 1860s. Meyer, an avid collector, had established his own Egyptian museum in Liverpool to cater for those who were unable to make the trek down to London to see the collection at the British Museum.

Collection highlights include the Ramesses Girldle – a magnificently well-preserved sash which would have been worn across the chest of the Pharaoh Ramesses III; a wooden model of a kitchen, showing figures baking, brewing and butchering; and a papyrus bearing a written confession to robberies of the tomb of Ramesses VI, in the Valley of the Kings. 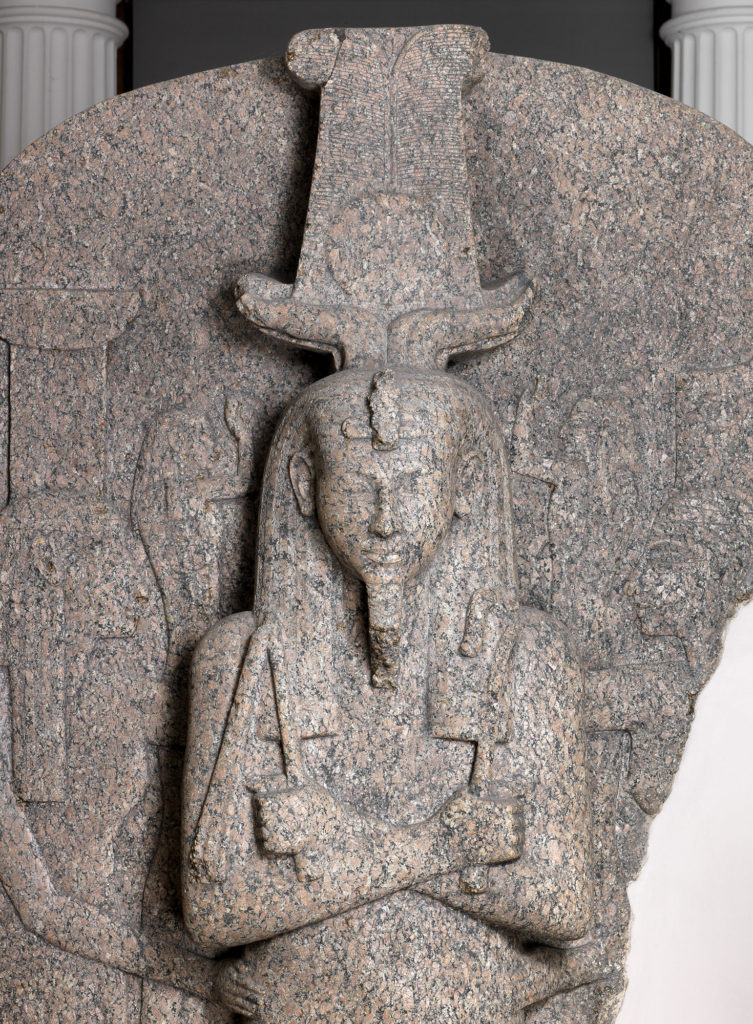 The Fitzwilliam’s Ancient Egyptian galleries were established not long after the initial opening of the museum, when Cambridge University members donated several rather large monuments, including the seven-ton sarcophagus lid of Ramesses III, the coffins of Nespawershefyt and the granite sarcophagus of the scribe Hunefer.

Since then the Fitz’ Egyptology collection has grown, with help from Sir Wallis Budge, an Egyptologist at the British Museum who encouraged the university to provide a grant to supplement the valuable, but sparse collections.

Collection highlights include the spectacular granite sarcophagus lid of warmongering king of Ancient Egypt, Ramesses III – one of the first Egyptian artefacts installed in the museum, and the object that kick-started the now 16,000-strong Egyptology collection. 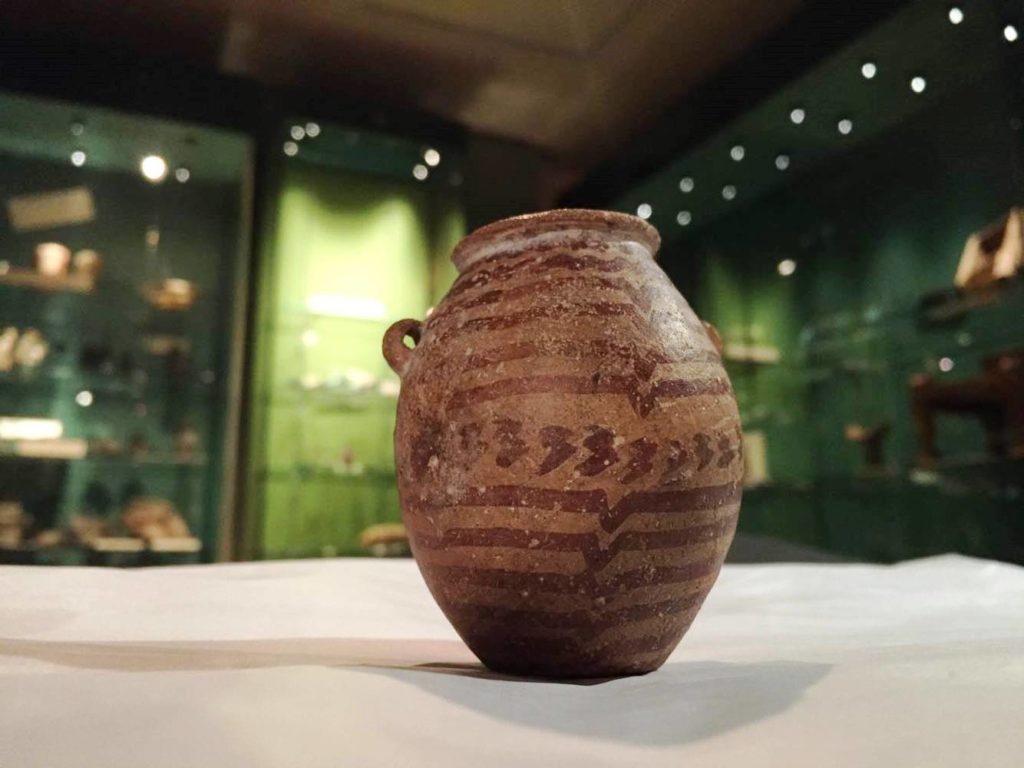 In the grounds of Swansea University, the Egypt Centre has the largest collection of Ancient Egyptian objects in Wales, and is the only museum dedicated entirely to Egyptology in the region. The small but incredibly well-stocked museum was established in 1998 to help offer inspiration to university students, while also welcoming members of the public to experience the wealth of amazing artefacts from this ancient civilisation.

The majority of the museum’s artefacts came from Sir Henry Wellcome’s vast collection; the university acquired more than 90 cases of artefacts and 48 pots in the 1970’s – over three decades after Wellcome’s death. Today, the museum welcomes visitors to explore the array of artefacts in the House of Life and House of Death galleries, and lets you get hands on with some real ancient Egyptian artefacts, dating from thousands of years ago.

Collection highlights include the painted coffin of a female musician from Thebes, beautiful bead necklaces from the time of Tutankhamun and a mummified crocodile. 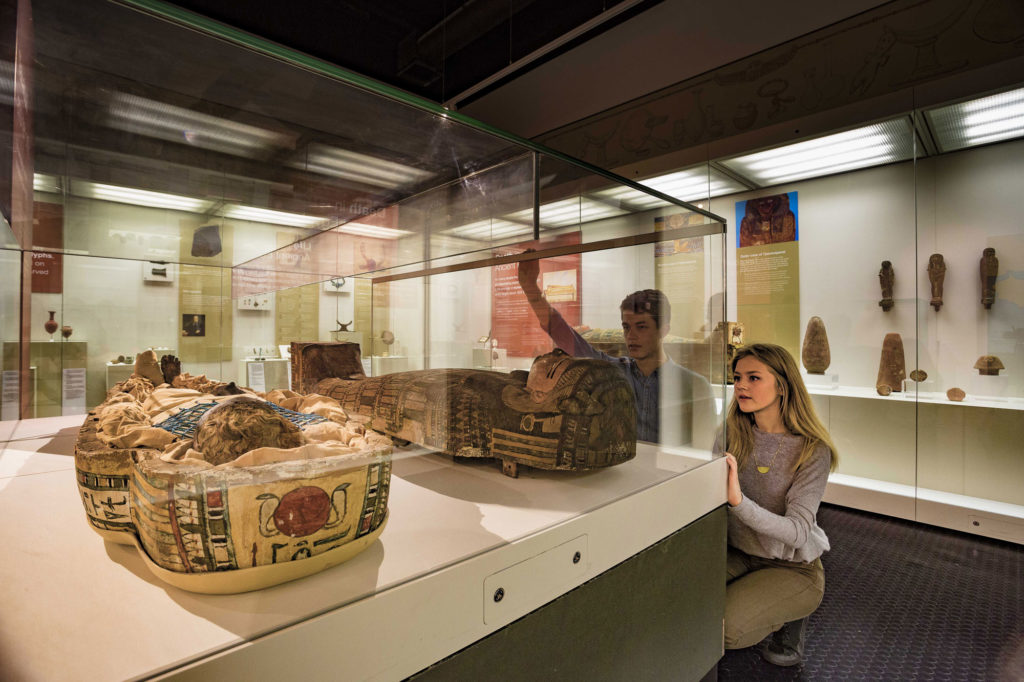 The Egyptology gallery at Ulster Museum houses a selection of pottery and household items exploring everyday life in Ancient Egypt, including beautification objects such as jewellery, kohl and hair accessories. The second half of the gallery explores Ancient Egyptian rituals and beliefs towards death and the afterlife, including the gallery’s star object – the mummy of a mistress of an important house near Thebes.

Collection highlights include the mummy of Egyptian lady Takabuti, found in Thebes and brought to the museum as a star attraction in 1834.