Bright and gilded or rough and sculptural, fine art or applied art, every day or one-of-a-kind; ceramics cover a tremendous range of textures, aesthetic qualities and purposes. UK museums have a truly diverse selection of ceramic collections, and we’ve picked some of our favourites.

Here they are, in no particular order: 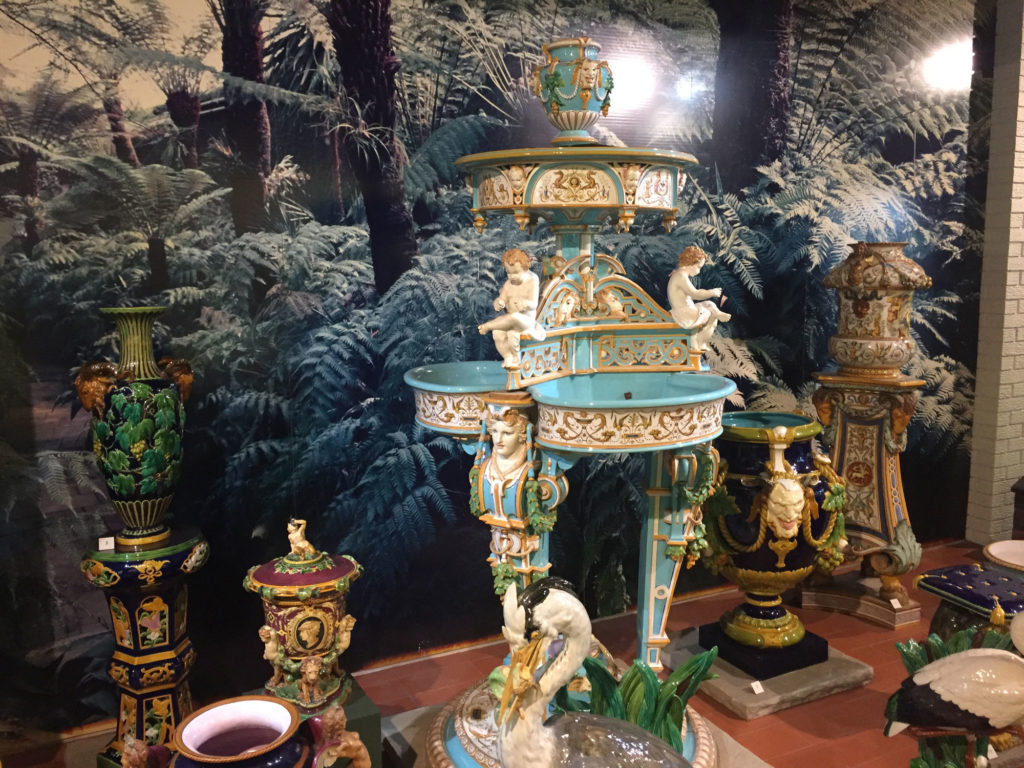 A display of Minton ceramics on show at the Potteries Museum, Stoke-on-Trent. © Richard Moss

In this area of Staffordshire, serendipitous placement of the raw materials required to create ceramics – clay, coal, lead and salt – made the six towns of Stoke-on-Trent a powerhouse of pottery in the 17th century.

The collection is not limited to just Staffordshire pottery though, everything from Neolithic pottery to an impressive assortment of 20th century British studio ceramics is on show. 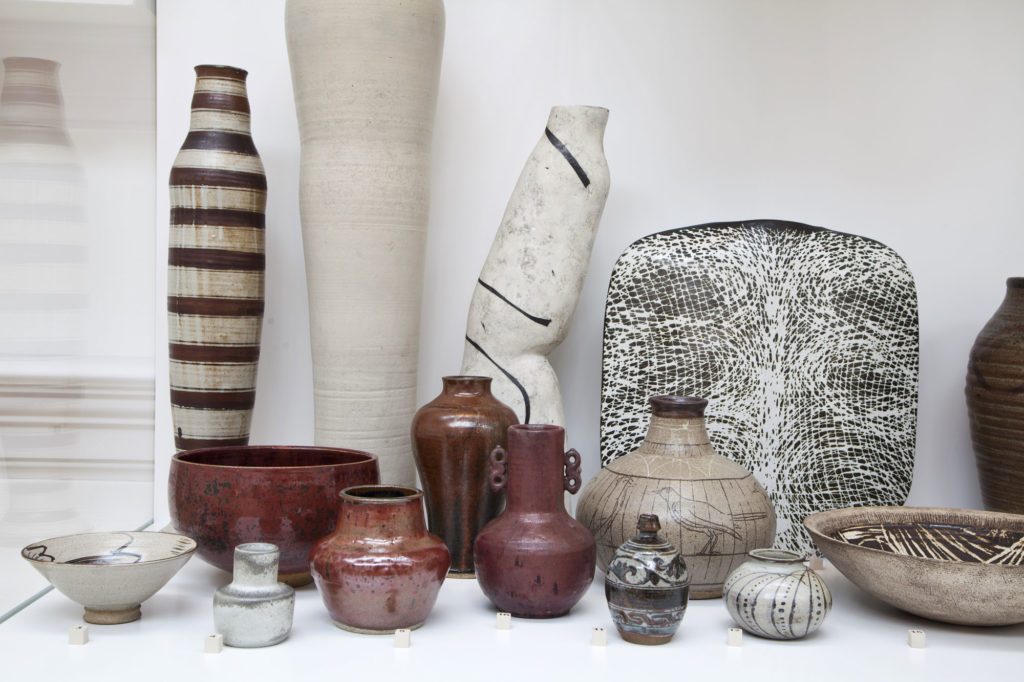 York’s dedicated centre of all things ceramic, CoCA is a treat for the eyes with collection highlights covering everything from prehistoric pots to contemporary art.

The collection was started in the 1920s by the Very Reverend Eric Milner-White, Dean of York, whose interest in ceramics was rather unusual for the time, meaning this forward-thinking collector could bag some of the best ceramics of the day.

The collection is a haven for studio ceramics fans, boasting the biggest, and one of the most important collections of British studio ceramics in the country, including iconic early works by Bernard Leach, Shoji Hamada and William Staite Murray – three of Milner-White’s most admired potters. 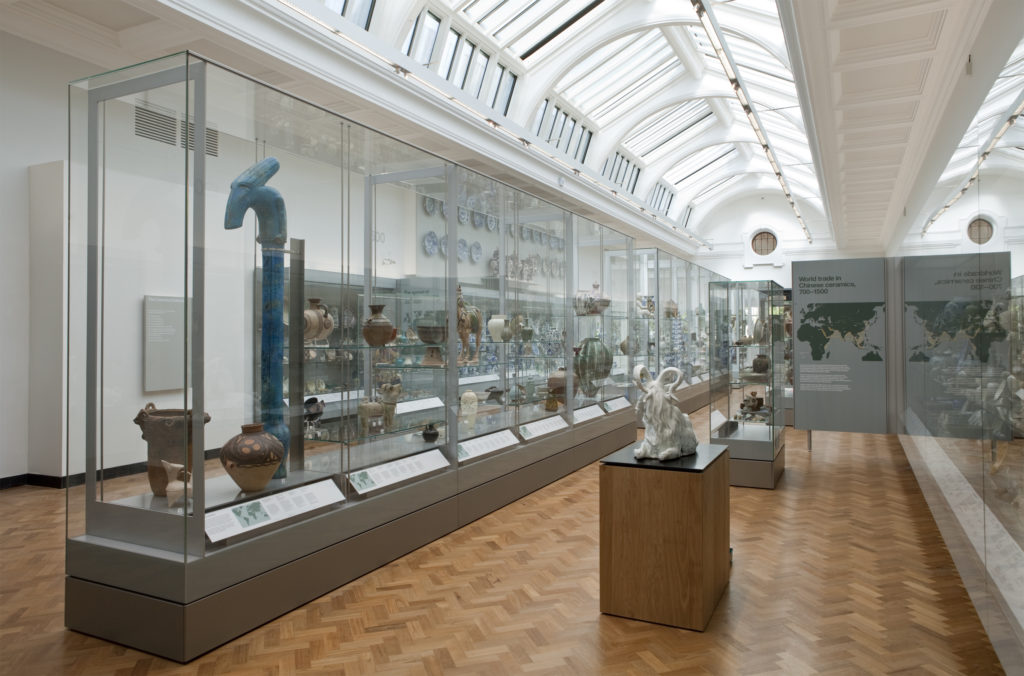 London’s inimitable museum of art and design, the V&A, is home to the most comprehensive ceramics collection in the world.

The museum’s transcendent collection spans centuries and continents, a truly encyclopaedic survey of the history of pottery and ceramics.

Galleries cover almost every imaginable aspect of the versatile medium, from architectural ceramics such as stoves and tiles, rococo, Asian and European displays, 20th century studio ceramics from influential potters including Bernard Leach and contemporary ceramic art by the likes of Richard Slee. 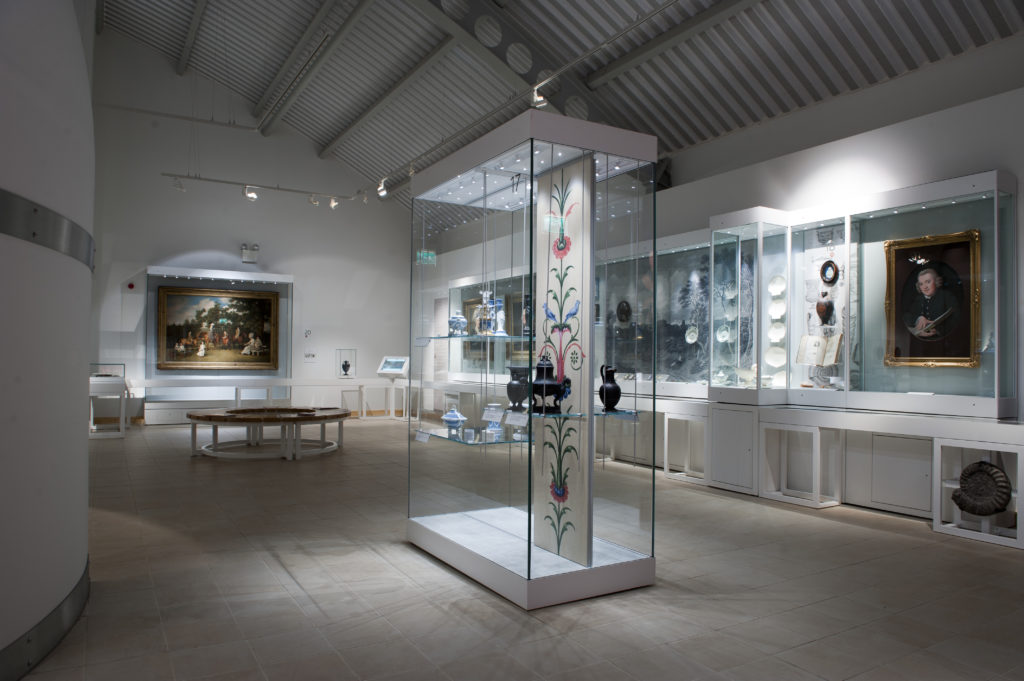 The galleries at the Wedgwood Musuem chart the success of one of the world’s most iconic potteries. Photo ©Wedgwood Museum/ WWRD

A name synonymous with high quality and luxury, the Wedgwood Museum tells the story of the Josiah Wedgwood and Sons company who, in the late 1750s, began producing what would become the one of the world’s most famous pottery brand.

Examining what it takes to produce pottery perfection, displays reveal Josiah Wedgwood I’s aspiration for excellence, exploring the process, techniques, designs and the trial and error that result in Wedgwood’s trademark quality.

As well as having the museum, The World of Wedgwood is also the site of Wedgwood’s working factory, open for tours, so you can learn about the casting, design, and decoration developed over 250 years, then watch it being done today. 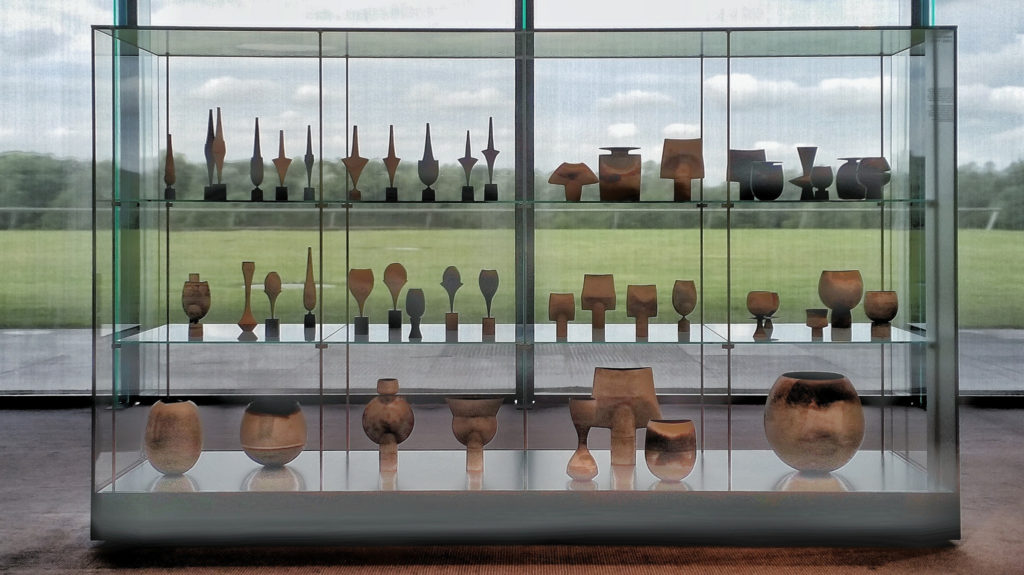 A stunning selection of Hans Coper pots on display at the Sainsbury Centre. © peterob (CC BY-NC-ND 2.0)

A true testament to Richard and Lisa Sainsburys’ instinct for great art, the Sainsbury Centre for Visual Arts houses an incredible collection of modern art, abstract art, art from world cultures and ceramics.

The gallery’s collection of British studio ceramics is the personal collection of Lisa Sainsbury, whose keen eye for form and friendship with influential 20th century ceramicist Lucie Rie enabled her to collect an amazing assortment of pottery, including the largest public collection of Hans Coper’s sculptural, textural ceramics.

Other highlights include a selection of Lucie Rie’s work in wartime button production, and pots by Rupert Spira and James Tower. 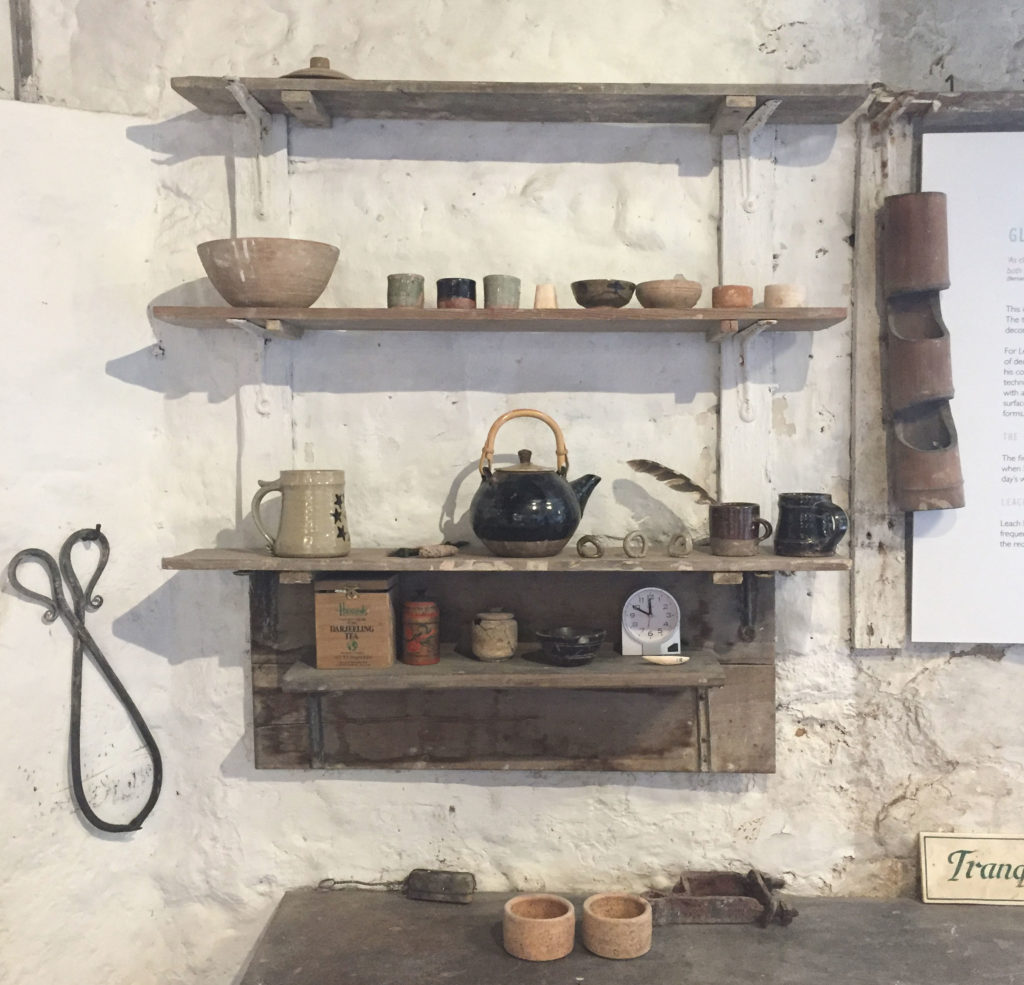 Founded by Bernard Leach and Shoji Hamada and built in 1920, the Leach Pottery is both a museum and bustling production line, with the Leach production team still practicing Bernard’s crafting philosophy – making everything by hand, embracing simplicity and function.

The compact gallery at the entrance displays some of the permanent collection, with work by Bernard, Janet and David Leach, Shoji Hamada and Michael Cardew, amongst others, on show. 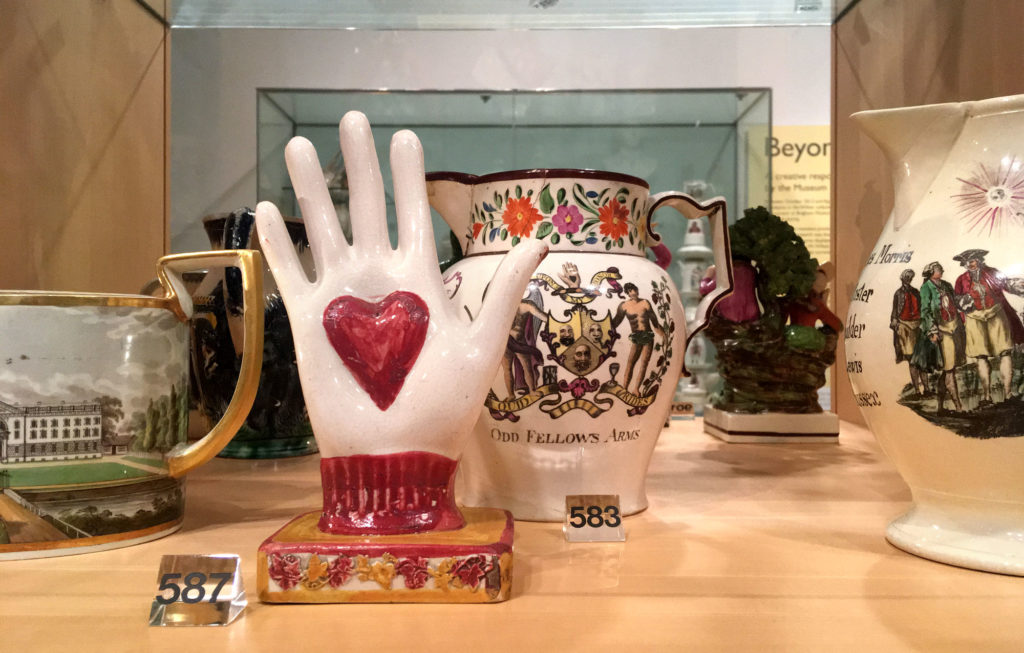 Established by one of the museum’s founding fathers, the Willet collection of popular pottery at Brighton Museum is one of entrepreneur Henry Willett’s most innovative collections.

A selection of ceramic vessels, plaques, tiles and ornaments dating between the 1600s and 1900s, the collection of 2000 plus pieces illustrates British popular culture, politics, history and society.

Based on 23 themes outlined by Willett including professions, crime, religion, pastimes and clubs, the pieces on display offer a snapshot into British culture. 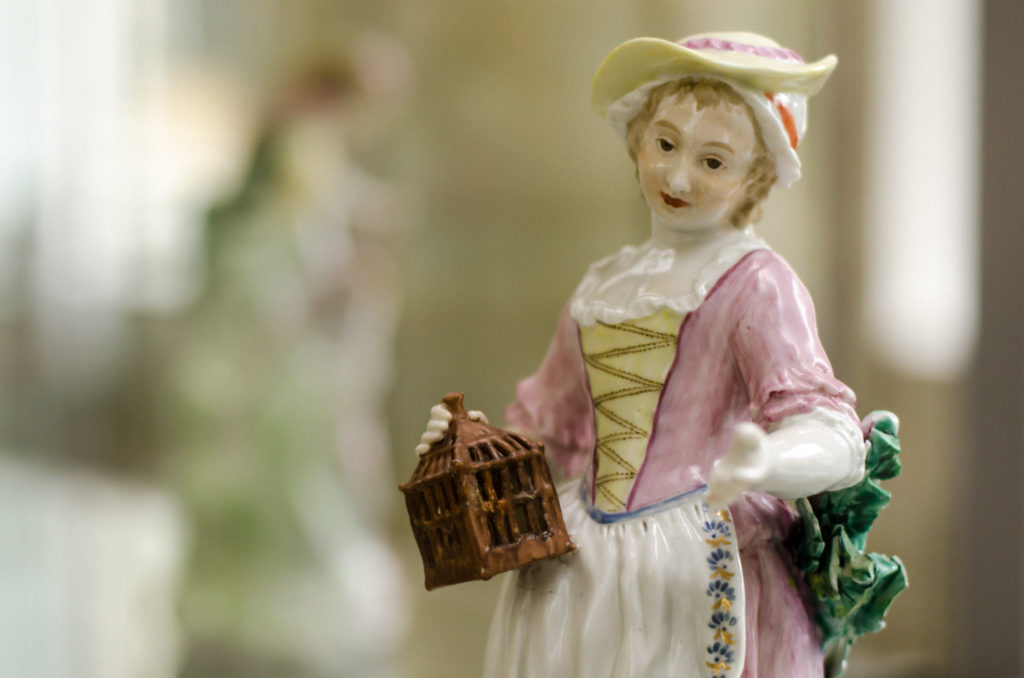 The Fitzwilliam Museum in Cambridge has one of the most important collections of European, Middle Eastern and Far Eastern ceramics in the UK. © Arseni Mourzenko (CC BY 2.0)

The Fitzwilliam’s extensive collection of art and antiquities did not originally cover ceramics. If it weren’t for the efforts of past director Sir Sydney Cockerell in the early 20th century, the Fitz’ important collections of European, Middle Eastern and Far Eastern ceramics would not exist.

Some of the finest manufacturers and decorators are represented in the exceptional collection of earthenware and porcelain pieces, covering a range of forms from decorative sculpture to practical tableware, tiles and vases.

The ceramics collection, which is still being expanded today, forms part of the museums 30,000 strong Applied Arts collection, and includes an internationally important group of Korean ceramics. 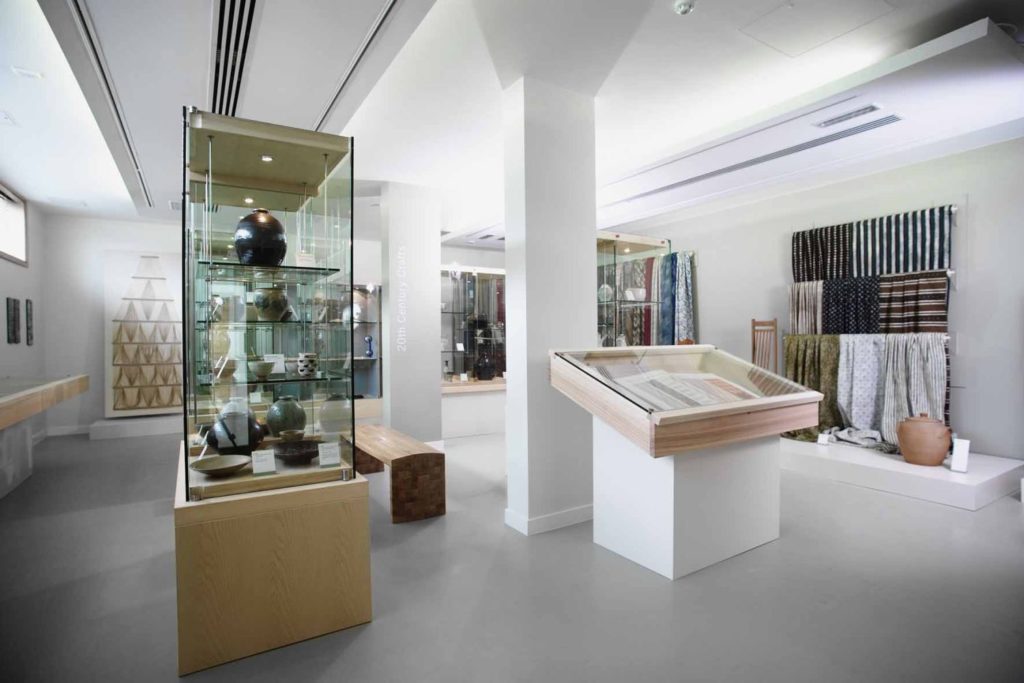 Part of the University for the Creative Arts’ Farnham campus, the crafts study centre is England’s first museum of modern crafts. Established in the 1970s as inspiration to both students and the public, the centre holds pieces by some of the most influential figures in craft.

Thanks to a gift from Bernard Leach, the centre holds a significant number of the studio ceramicist’s pots, as well as part of his personal collection of pottery from Japan, China and Korea. The rest of the collection, which covers around 100 years of ceramic history from the early 1900s to today, highlights pioneering studio potters and their archives. 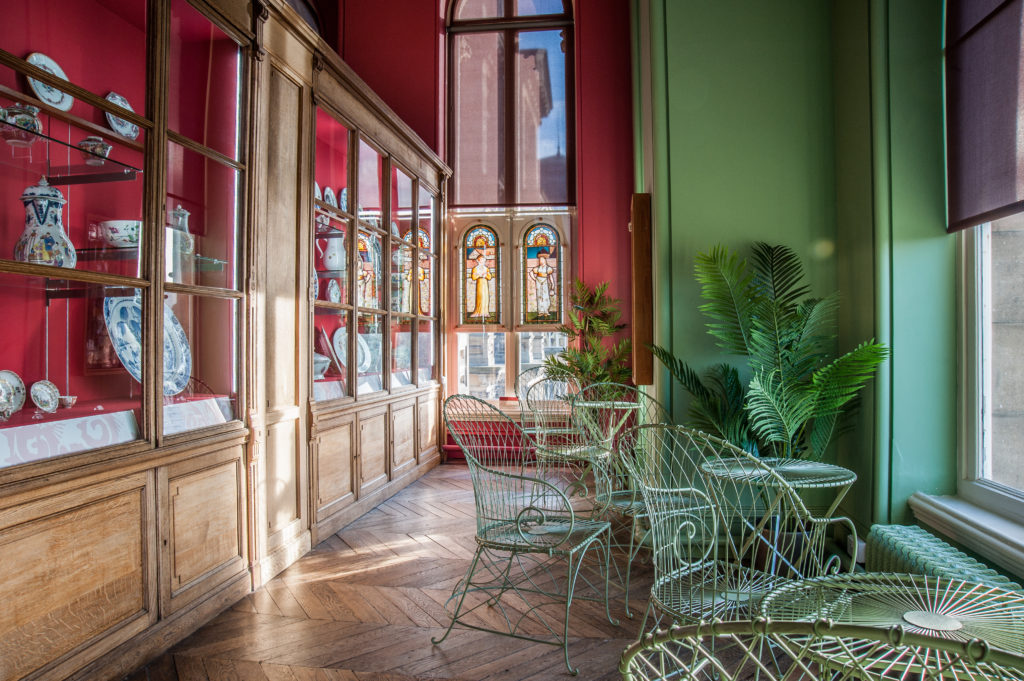 Part of the ceramic collection on display at Durham’s Bowes Museum. Courtesy the Bowes Museum

If studio pottery isn’t your thing, the ceramics collection at the spectacular Bowes Museum might be more to your liking. Acquired by the museum’s founders John and Joséphine, the collection pottery features objects from the 16th to 19th centuries, with a particular focus on French porcelain and delicate faïence pieces.

The Bowes Museum also has a strong collection of English and Oriental pottery, and pieces from most of the major German porcelain producers. 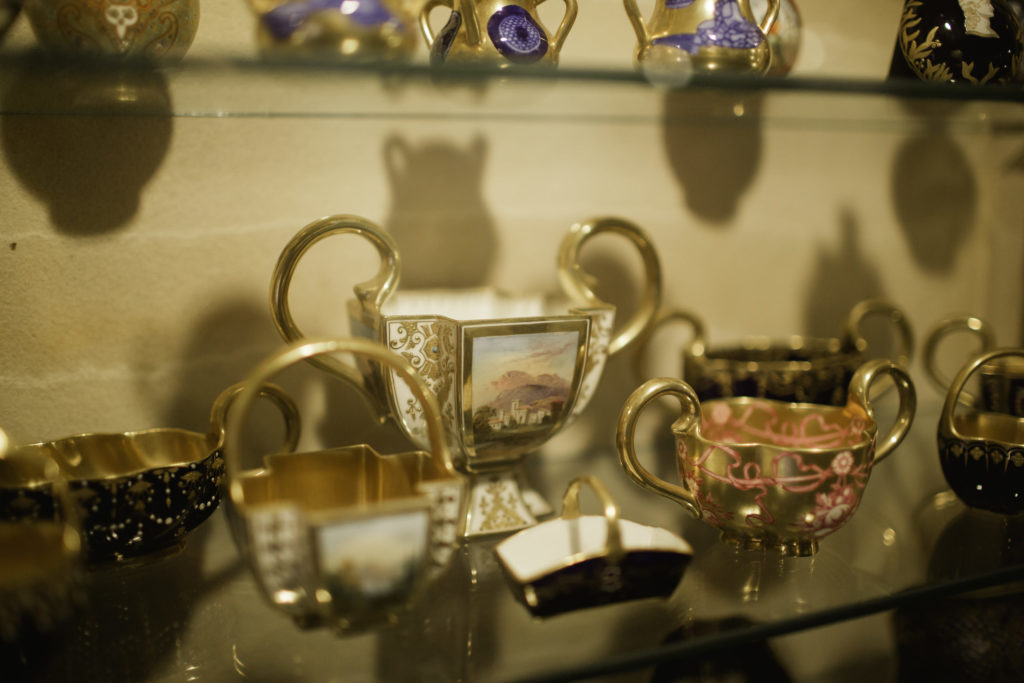 A selection of the ceramics on show at Coalport China Museum. © The Ironbridge Gorge Museums.

The beautifully bizarre-looking bottle kilns sitting proudly on site at Coalport China Museum give away what this site was used for between the late 1700s and early 1900s. Coalport China was a major manufacturer of fine porcelain and its founder, John Rose, was instrumental in developing new decorating techniques and glazes.

The factory produced some exquisite pieces during its operation, and the museum now holds the official National Collections of Caughley and Coalport china. Of the objects on display, the colossal Northumberland Vase – the largest item ever made by the pottery –  and he china made for Queen Victoria stand out as partially spectacular pieces. 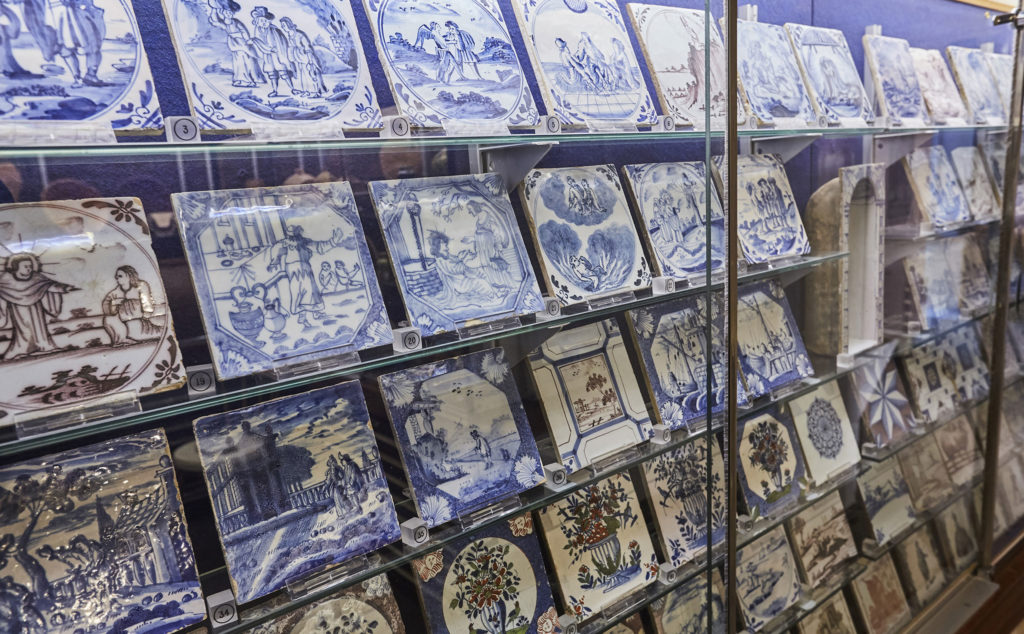 In the picturesque market town of Alton in Hampshire is a compact gallery with an excellent collection of fine pottery and porcelain dating from 1250 to the present day.

On show are pieces by internationally-renowned potters and potteries such as Lucie Rie and Wedgwood, and a significant collection of tin-glazed earthenware. More than 3,000 pieces are on show, largely from the UK but also including the East Asian and Continental examples, which lent inspiration to British makers.

Visit on a sunny day and you’ll get to take advantage of the gallery’s tranquil garden, a beautiful and peaceful space lovingly maintained by a team of volunteers and filled with flowers and herbs. 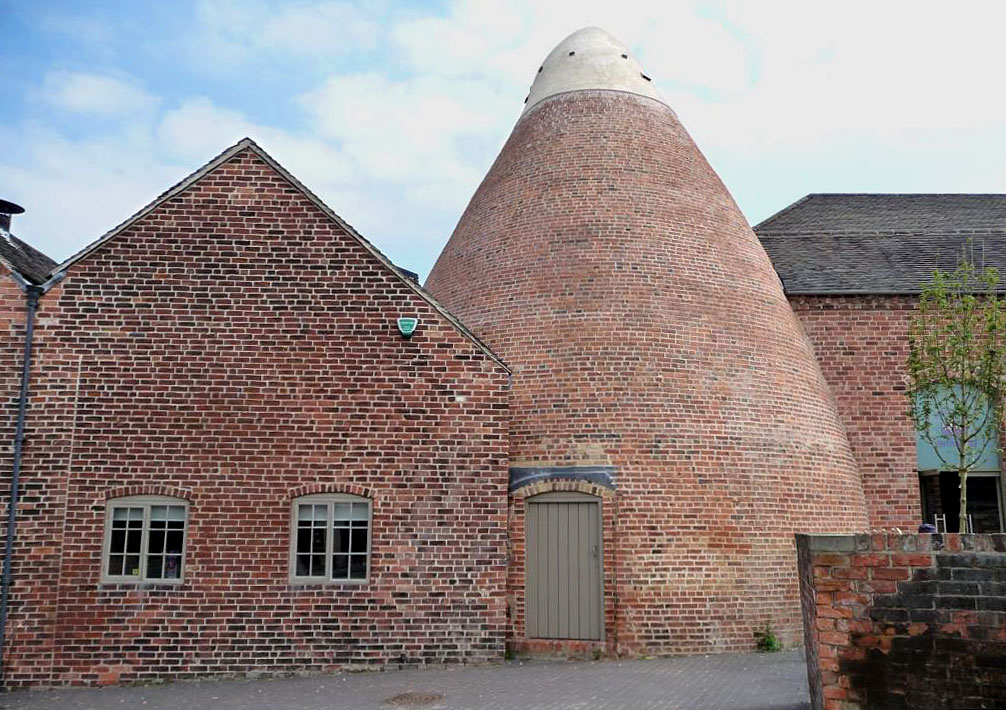 Housed in what is believed to be the only remaining sanitary ware pottery in the country, Sharpe’s Pottery Museum is revealed by its distinctive bottle kiln, sitting proud like a giant brick sugarloaf.

The museum tells the story of the pottery and South Derbyshire’s pivotal role in the development of sanitary ware such as toilets, sinks and sewage pipes. Sharpe’s manufactured sanitary ware using local clay for a century – from the 1850s to 1950s, closing in the 60s after struggling to modernise following the Clean Air Act.

As well as sanitary ware there are many other examples of domestic and decorative work by other potteries local to South Derbyshire on display. An exhibit in collaboration with The National Forest examines the negative impact the coal and clay industries had on the local area, and the recent transformation of this landscape.