Some of the oldest relics of man-made heritage in the UK are not to be found in museums, but out in the fields and hills, standing weathered but monumental as they have done for thousands of years

Our prehistoric ancestors were a dab hand at somehow getting huge slabs of stone to stand up on their ends, without the benefit of any kind of motorised cranes or hydraulic haulage, leaving us these strange rows and circles of lichen-covered rocks, and earth covered barrows (burial chambers). Those that remain mostly date to the late Neolithic and early Bronze Age, about 4,000 – 5,000 years ago.

Their historical importance has been long recognised, and Stonehenge, Avebury and partners around the country were all designated Scheduled Ancient Monuments back in 1882. Here’s a trail around some of the key standing stones and stone burial chambers of Britain.

Ring of Brodgar and the Stones of Stenness
Orkney, Scotland 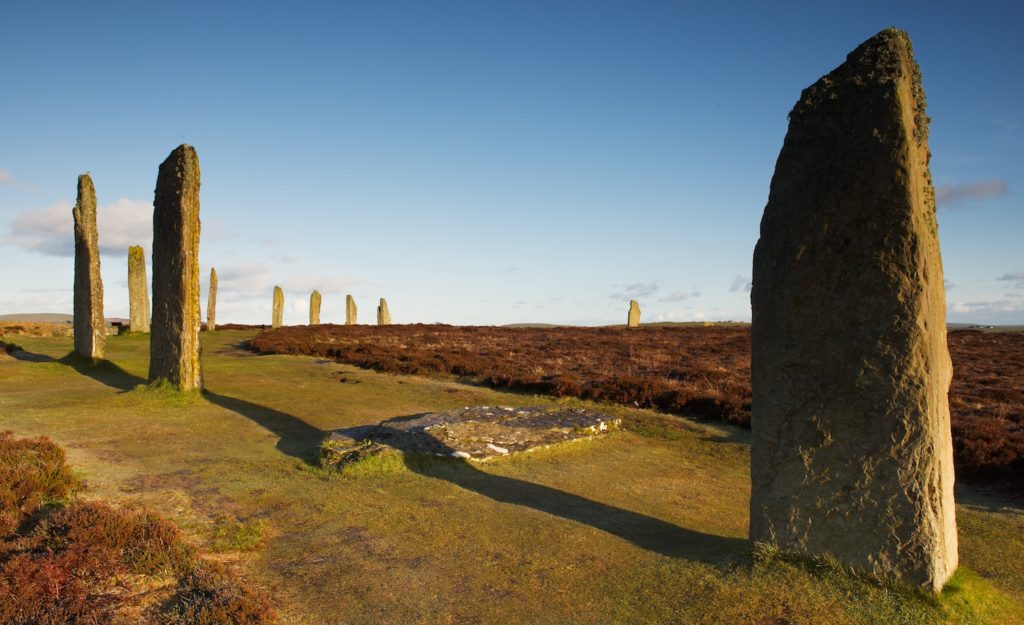 The Ring of Brogdar in Orkney © Steve Schnabel CC BY-NC-ND 2.0

Starting in the far north, Orkney’s Ring of Brodgar and the Stones of Stenness date to 2900 BC. These tall, slender, tablet shaped stones are arranged in perfect circles, and are known as the Temple of the Sun and the Temple of the Moon, referring to the common feature of stones being positioned in relation of astronomical events. 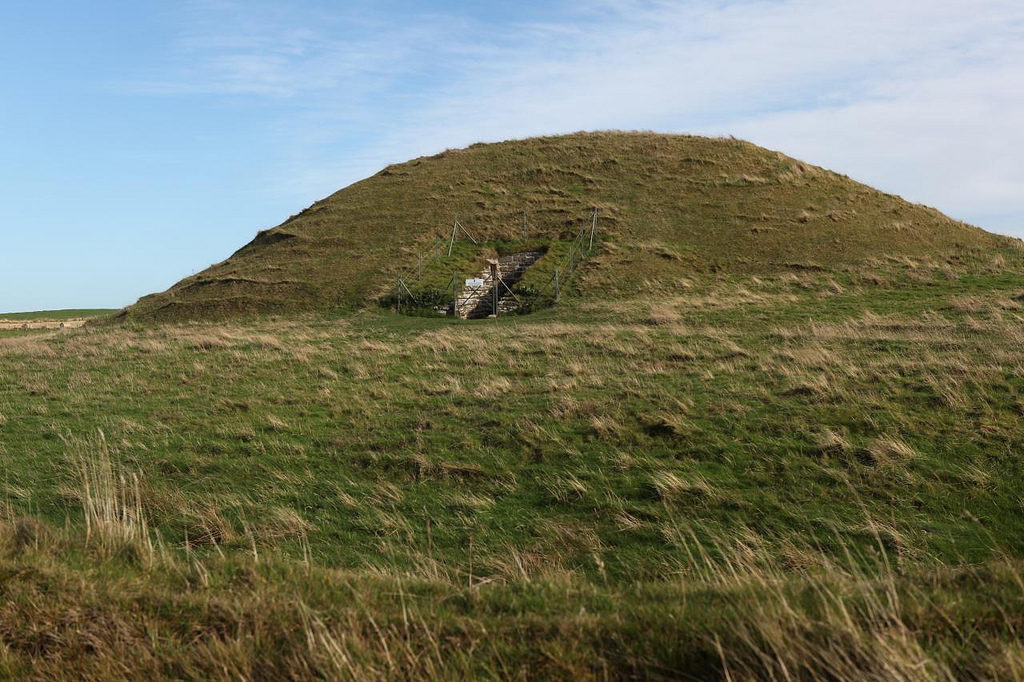 Nearby Maeshowe is a megalithic tomb with a stone-built passage leading to a burial chamber within a large earth mound. The entrance is aligned to the south west, so that the back wall is illuminated perfectly at the mid-winter equinox when the sun shines straight down the passage. In addition to its original purpose, the mound was used by Vikings later on, who left behind a great collection of runic inscriptions. 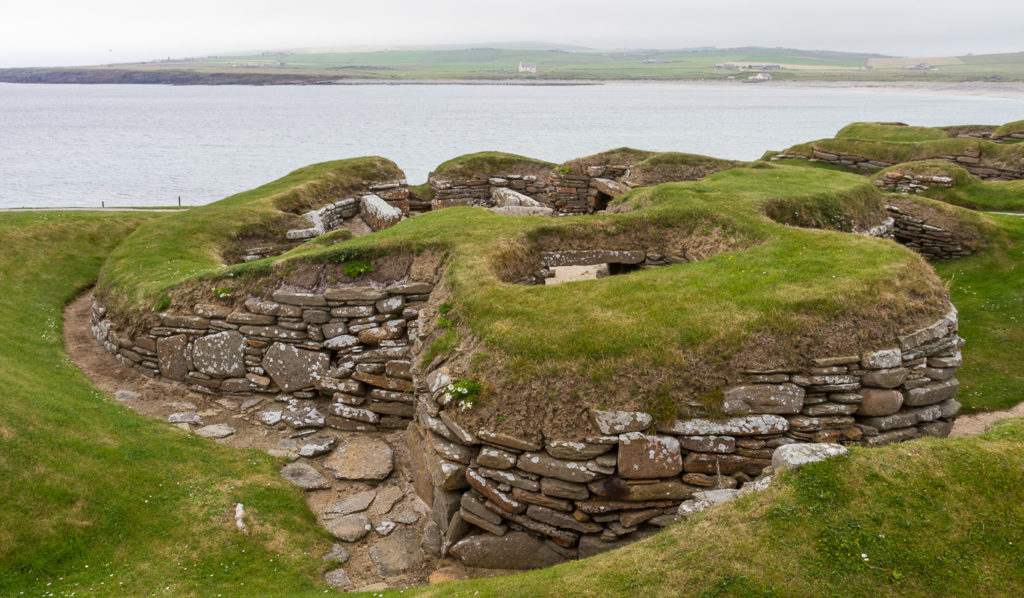 Completing the quartet of ancient wonders making up the UNESCO World Heritage Site deemed ‘The Heart of Neolithic Orkney’ is Skara Brae. This incredible cluster of stone dwellings, built on the Bay of Skaill, outdates Stonehenge and is the most complete Neolithic village in Europe. First uncovered by a devastating storm in the 1850s, Skara Brae is a fascinating insight into prehistoric life – comprising eight homes complete with a selection of surviving stone furniture, doorways, covered passages, a drainage system, and even toilets. 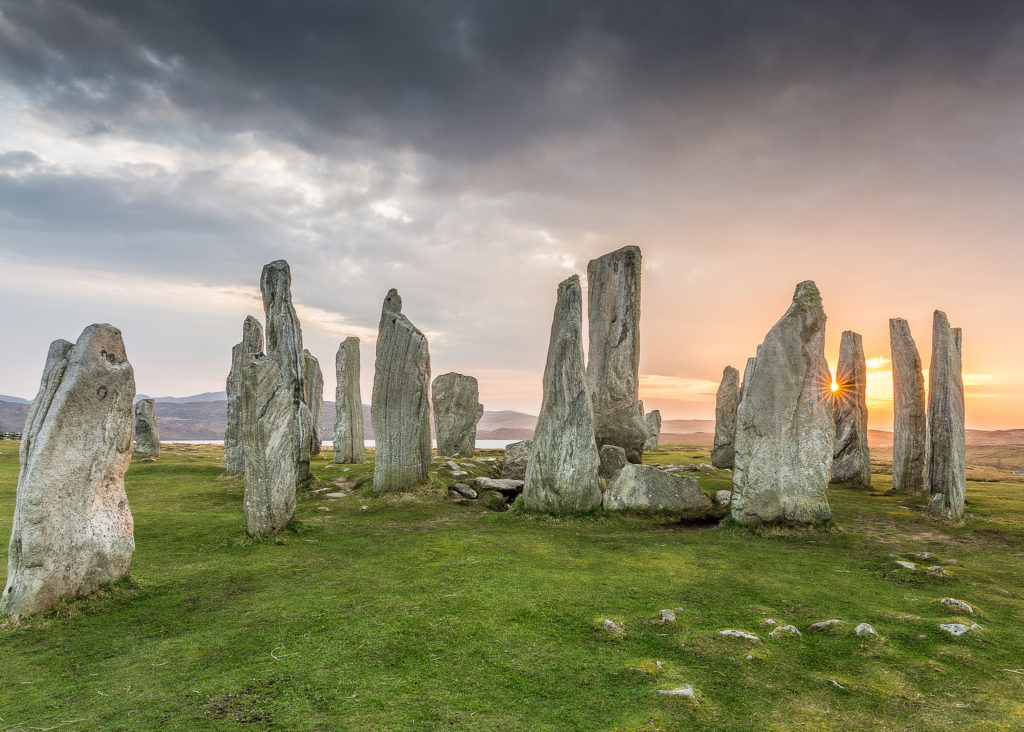 The Callanish Stones, on the Isle of Lewis © Chris Combe CC BY 2.0

The Calanais (or Callanish) Stones on the Isle of Lewis are slices of silver-grey, hewn from Lewisian gneiss, but have their origins about 1,000 years after the similar construction on Orkney. At the centre is a ruined chambered cairn. Local traditions say that St Kieran created the stones from the resident giants of old, who refused to be converted to Christianity.

The 40-odd (mostly) standing stones of the circle at Castlerigg are set against a wonderfully dramatic backdrop featuring two mountains, Helvellyn and High Seat. Look the other way and there are views across to Skiddaw, Blencathra and Lonscale Fell – a suitably awe-inspiring spot for whatever rituals went on here. The circle and inner rectangle contain several astronomical alignments. 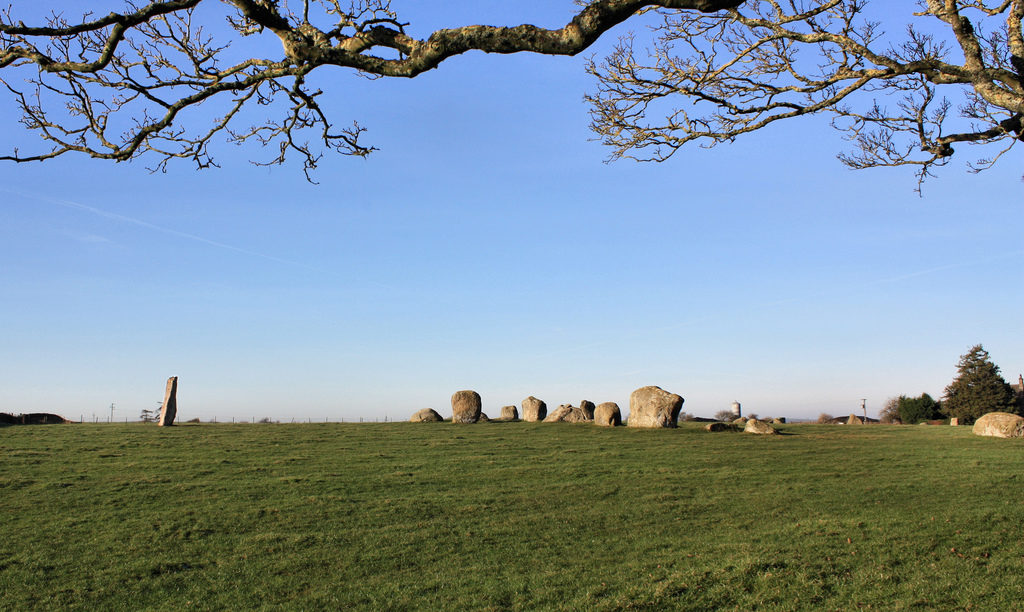 Staying in Cumbria, the early Bronze Age Long Meg and Her Daughters at Penrith is one of the largest in the country. The 60-stone ellipse of Daughters stretches more than 100 metres across, with 3.5-metre tall Long Meg standing like a pillar 70 metres outside the circle, on the line of the midwinter sunset. A local story goes that Meg and the daughters were a coven of witches petrified by a saint.

Penrith Museum is a good place to find out more about the stone circles of Cumbria and the prehistoric heritage of the Vale of Eden area. 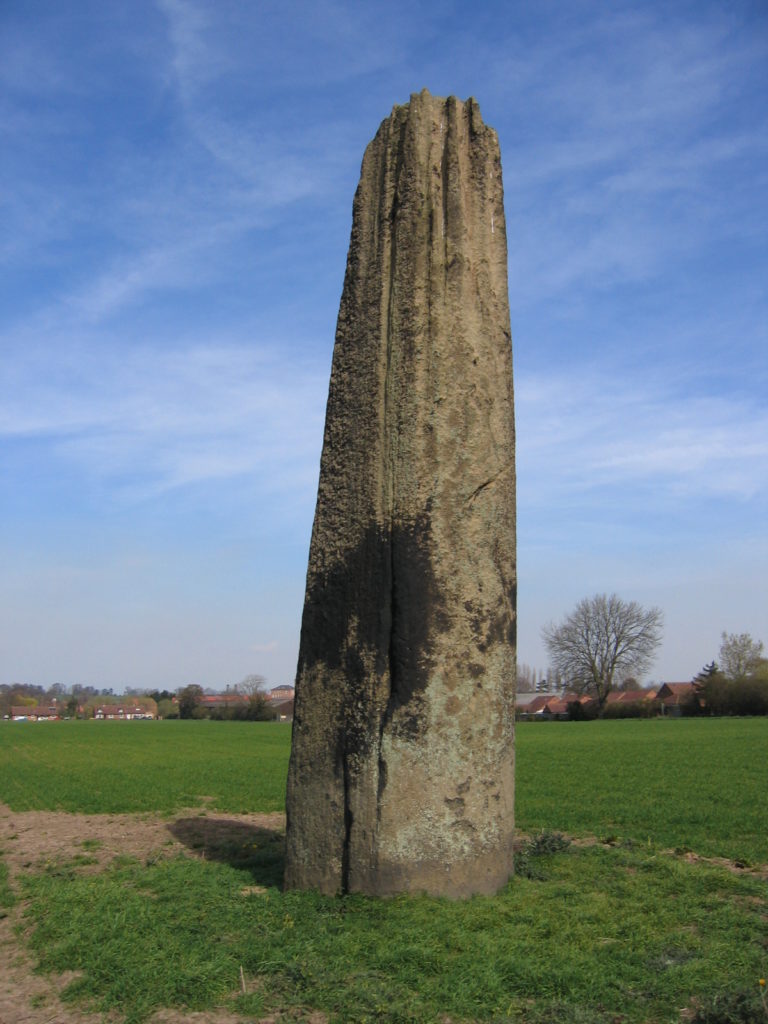 Over in Yorkshire stand some of the tallest Neolithic stones recorded: The Devil Stones. These stones reach up to 22ft high, the height of three men standing on top of each other, and surpass anything at Stonehenge. The town they reside in, Boroughbridge, doesn’t make enough of a fuss about these prehistoric monuments, but they can be visited in the west and east side of Roecleffe Lane. 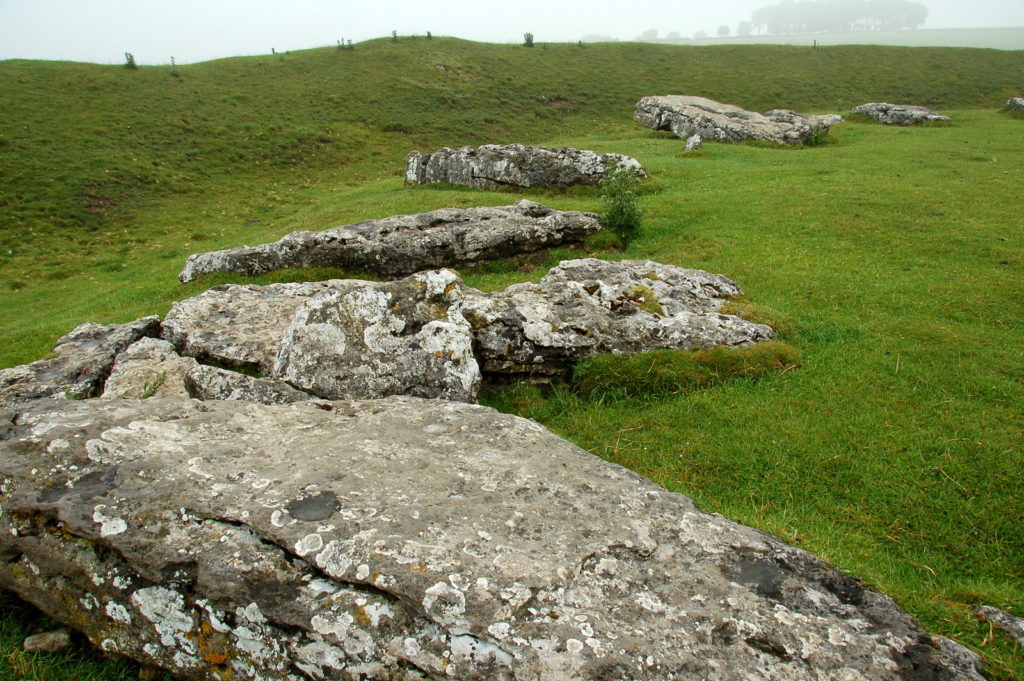 Arbor Low Stone Circle has a great setting on high Derbyshire moorland, but its 50 white limestone slabs are all fallen, and we’re talking about standing stones, not recumbent ones! The view from these stones is stunning and well worth a visit if you are in the peak district. 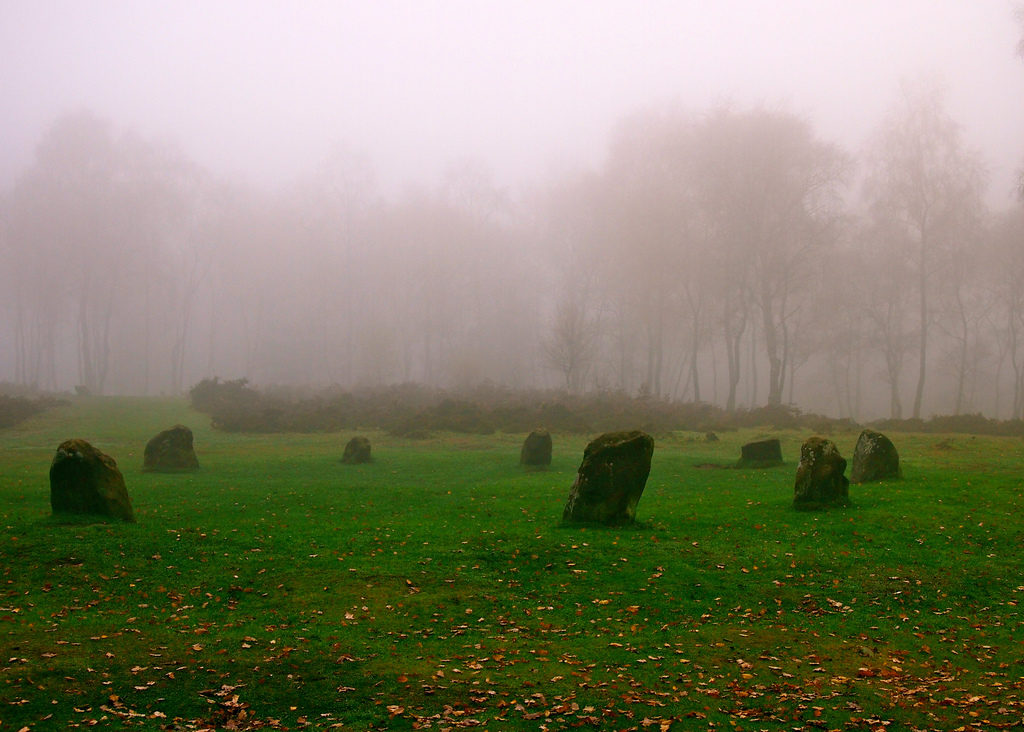 Of the 70-odd Bronze Age standing stones, barrows and ancient monuments located on the peak district’s Stanton Moor, the best known are the nine standing stones which make up the Nine Ladies Stone Circle. Overlooking the circle, the small King Stone was said to be a fiddler who was playing for the dancing ladies when they were all turned to stone as a punishment. 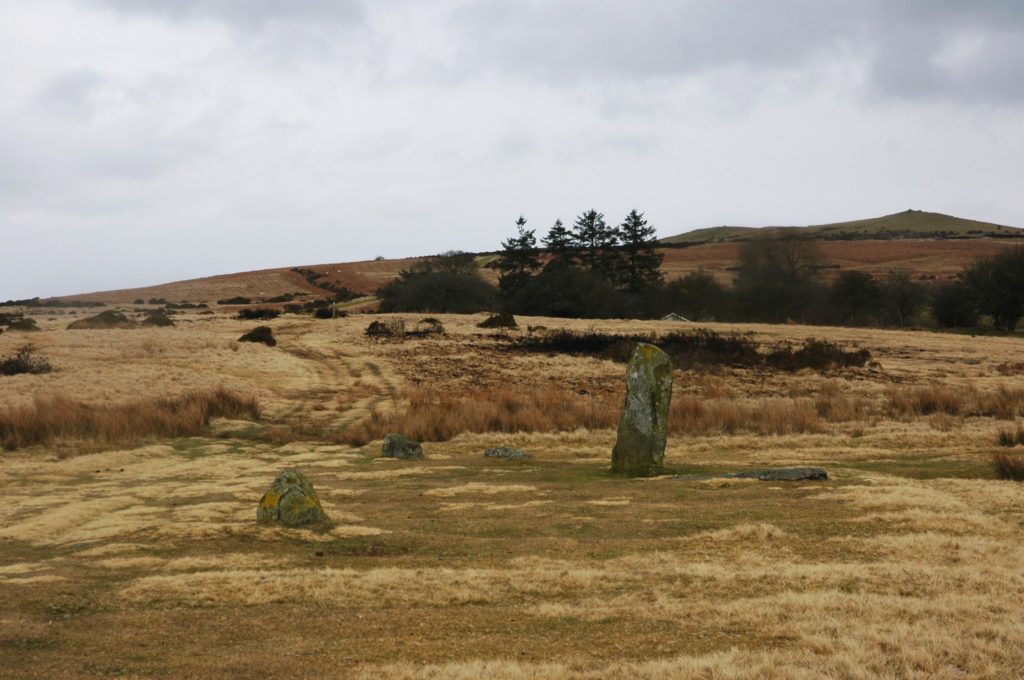 Half of this stone circle remains, with 15 out of 30 still standing. The stones make a distinctive circle with space for an entrance, but its purpose remains a mystery. Local legend says the stones were erected to trap an evil witch who was cemented in the middle. The stones are set in dramatic moorland on Stapeley Hill that makes a great place for a bracing walk. 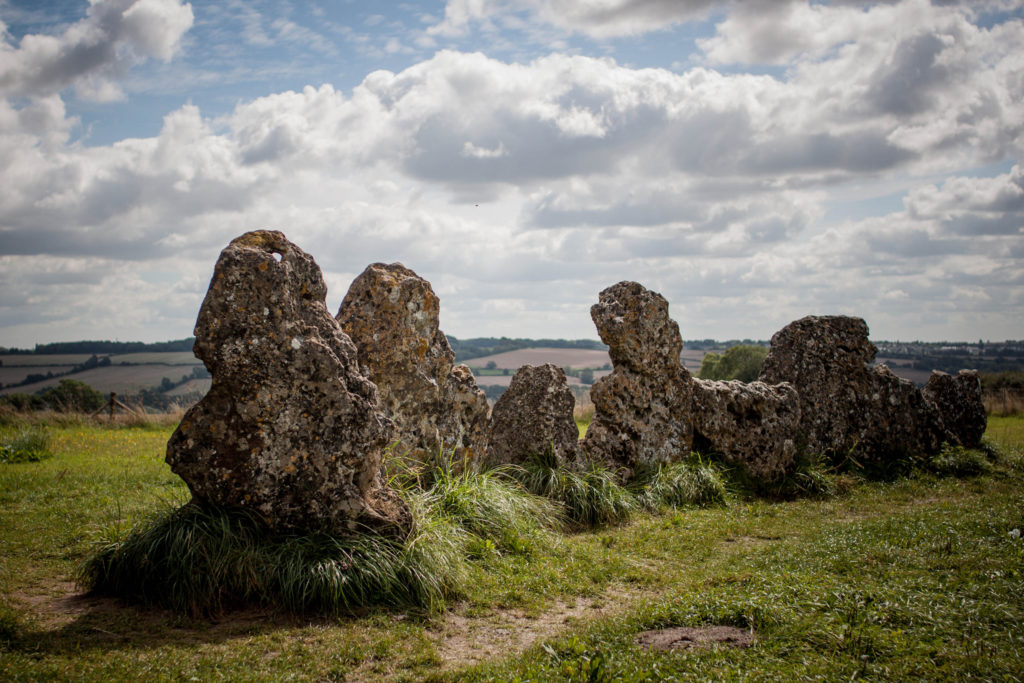 The Rollright Stones, Oxfordshire, have a nice bit of folklore behind them. The three groups, erected 4,000-4,500 years ago, are said to be a monarch (the twisted King Stone) and his courtiers petrified by a witch, though by the gnarled shape of them, you’d think it was the other way round. The burial chamber stones are known as the Whispering Knights. The antiquarian William Stukeley poetically described the Rollrights as being “corroded like worm eaten wood”.

Wayland’s Smithy is also in Oxfordshire, on the prehistoric Ridgeway path. Although it’s a Neolithic chambered barrow, it has become more associated with the Saxon god Wayland (supposedly he moved in, and would re-shoe your horse if you left it there with some payment). Four massive sarsens protrude at the front of the burial mound, set in a peaceful beech tree glade. 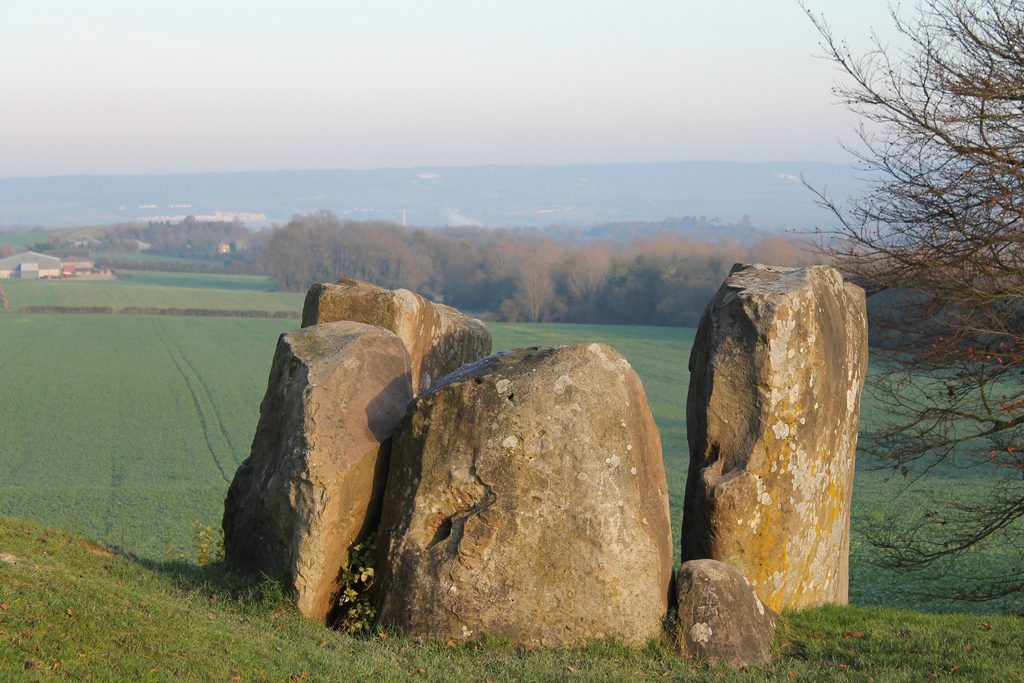 These wonderfully preserved sets of stones makes up a megalithic long barrow and are part of the Medway Megaliths. The site has been excavated several times producing the deliberately broken bones of 22 people and pieces of pottery including a Saxon sherd. The site is still a popular destination today for quiet meditation, and prayers are tied to the surrounding shrubbery. 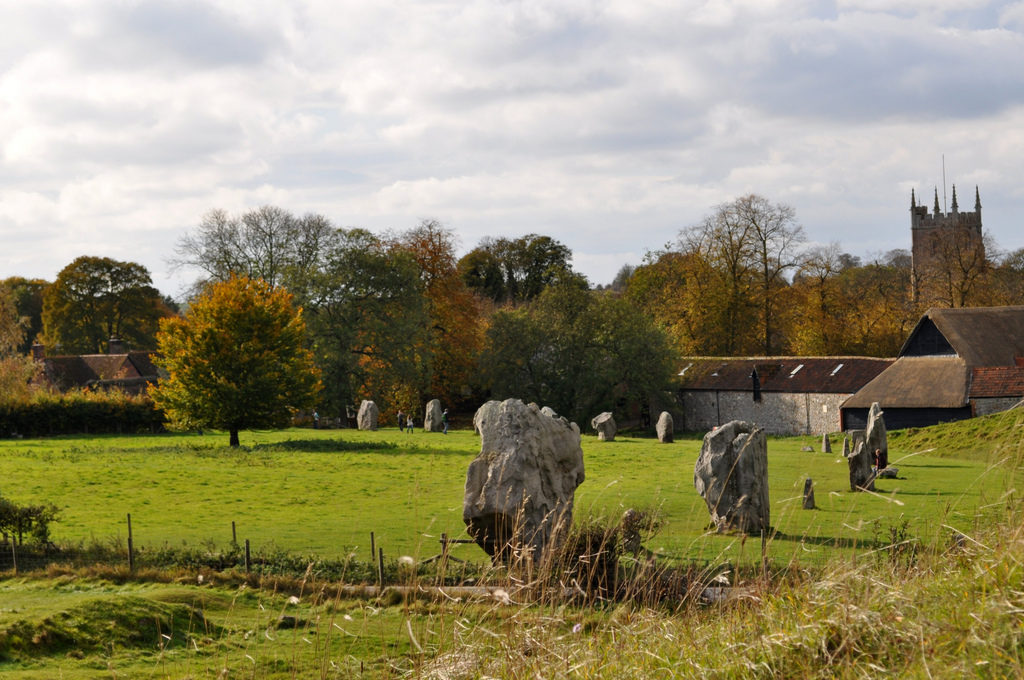 Just some of the standing stones lated at Avebury ©Afshin Darian CC BY 2.0

Shuffle south west along the Ridgeway and you’ll reach Avebury, Wiltshire, where there’s such a large circle they put a village inside it. And a pub (The Red Lion). Great. Avebury contains three stone circles making it the largest collection of Neolithic monuments in Europe. 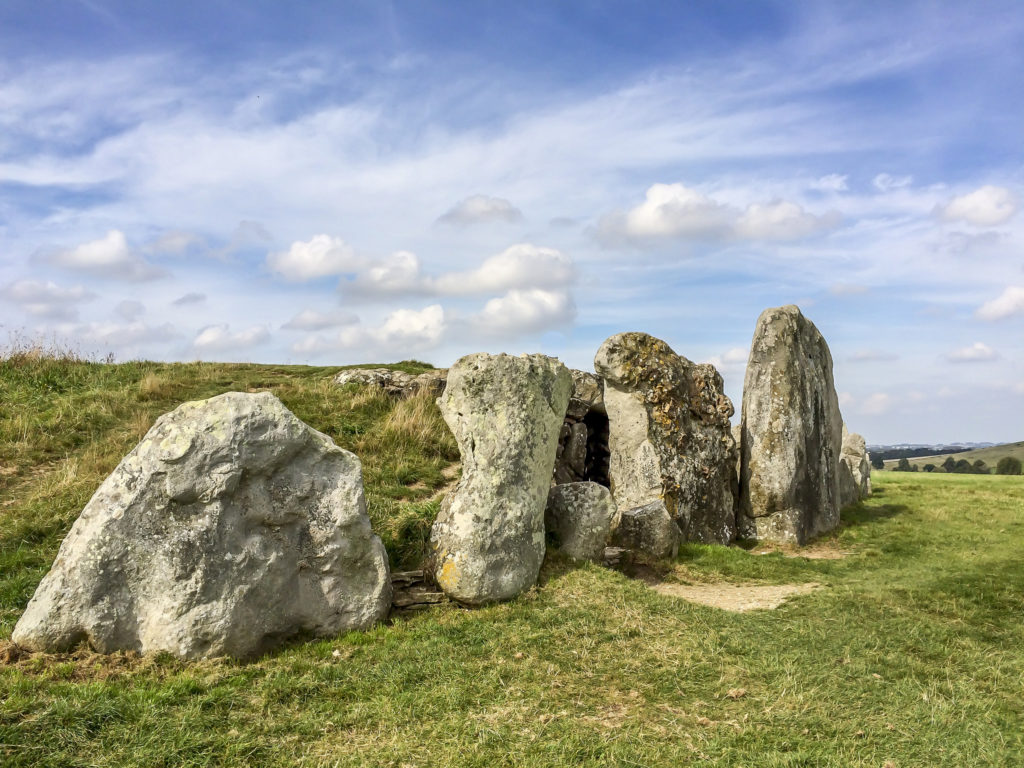 After your pint you might like to climb inside the concrete reinforced West Kennet Long Barrow and have a snooze. You won’t want to climb the largest man-made mound in Europe, Silbury Hill. Anyway, you shouldn’t, as it collapsed a bit in 2000 where some bright spark dug a 100-foot shaft down it in the 18th century, after it had stood there minding its own business for 4,500 years… 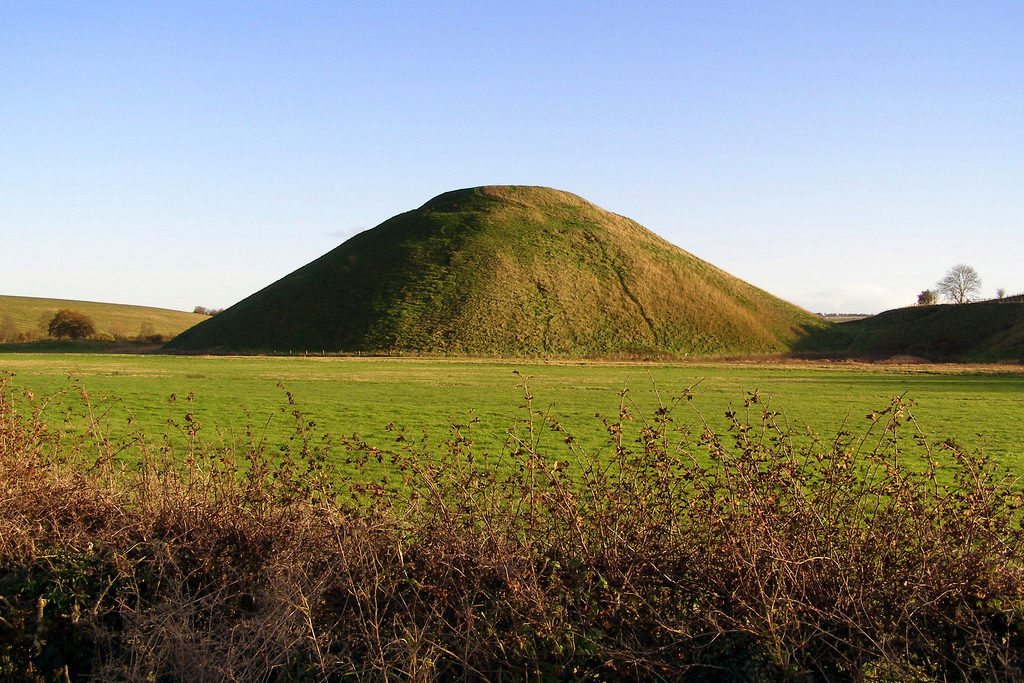 Find out more about these close-by sites and the ritual landscape at Avebury’s Alexander Keiller Museum, and decide for yourself whether you think Silbury was actually created when the Devil couldn’t be bothered to carry a shovelful of earth all the way to Marlborough, where he really wanted to drop it.

For a really good overview of the county, with very fine Neolithic and Bronze Age collections including the Bush Barrow treasures set off down to Wiltshire Heritage Museum.

Another important museum visit that will give you an insight into the wider ritual landscape of Wiltshire comes courtesy of The Salisbury Museum, which is home to the Avebury Archer, Stonehenge Man and a remarkable collection of neolithic archaeological treasures.

And how could we ever forget? Stonehenge, the mother of all stone circles, is like a lichen-covered magnet for tourists, druids, archaeologists and the curious. Hardly needing an introduction, all that remains to be said is that these whopping bluestone archways deserve their Mecca status. And just how did they get them from Wales to Salisbury Plain? 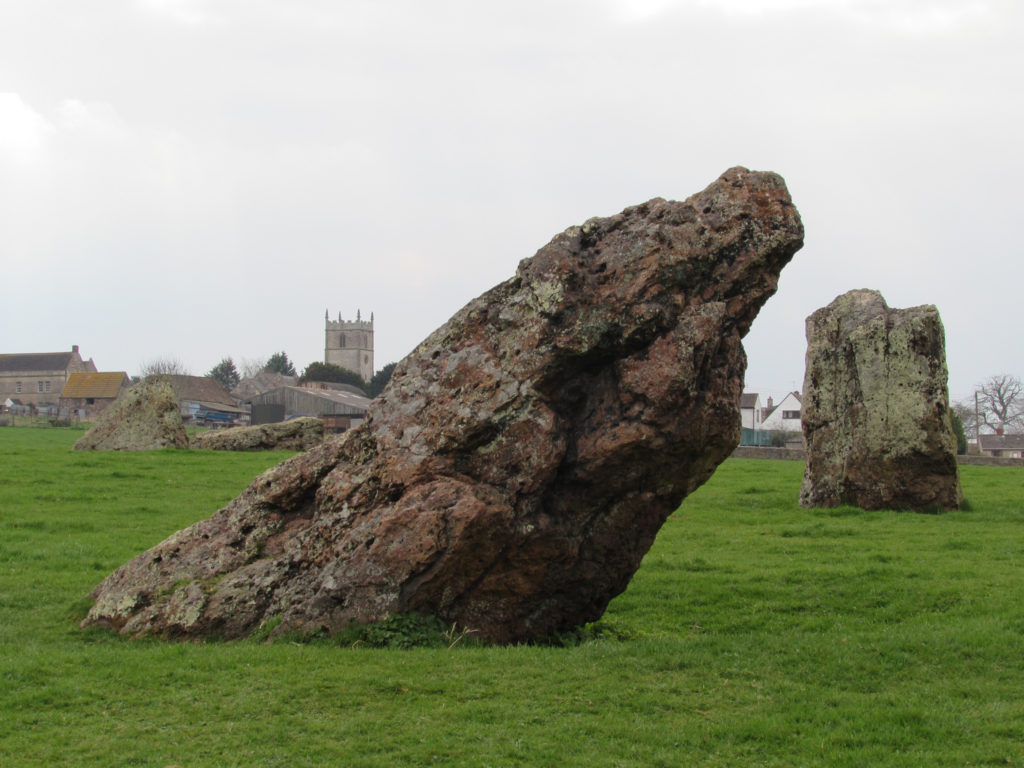 Though not as famous as its cousins Avebury and Stonehenge, 26 surviving stones make the 113 metre wide Great Circle at Stanton Drew the third largest stone circle in England. Also part of the complex is two smaller circles, and nearby there’s a group of three large stones called the cove (though you’ll have to visit the village pub to see these, as they’re situated in the garden). According to local legend, the stones are petrified wedding guests, punished for celebrating on the Sabbath. 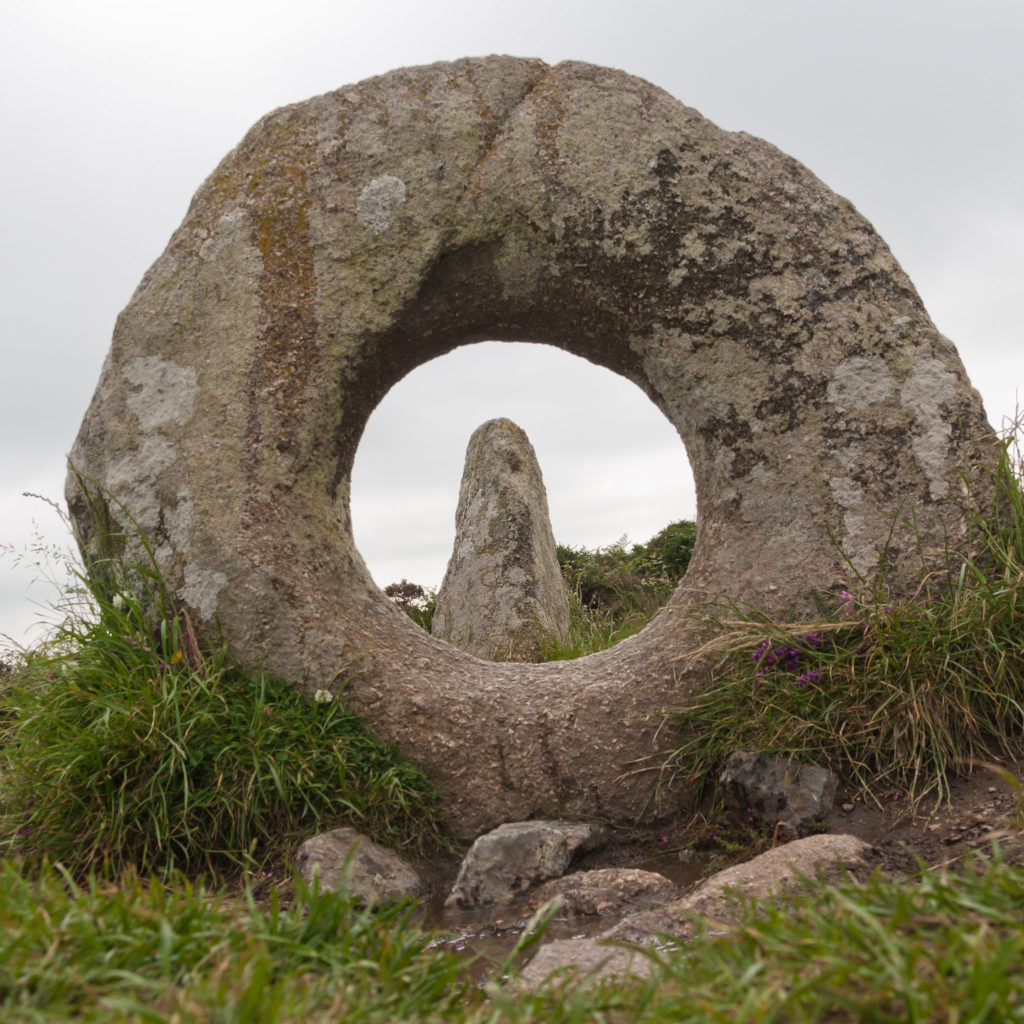 South-west England also has a plethora of standing stones to wonder at Mên-an-Tol – the stone with the hole – near Penzance, is an unusual example with rumoured curative properties, and there’s a perfect granite circle near Penwith, the Merry Maidens. Historic Cornwall’s field guide comes highly recommended for finding Neolithic and Bronze Age sites in the county. 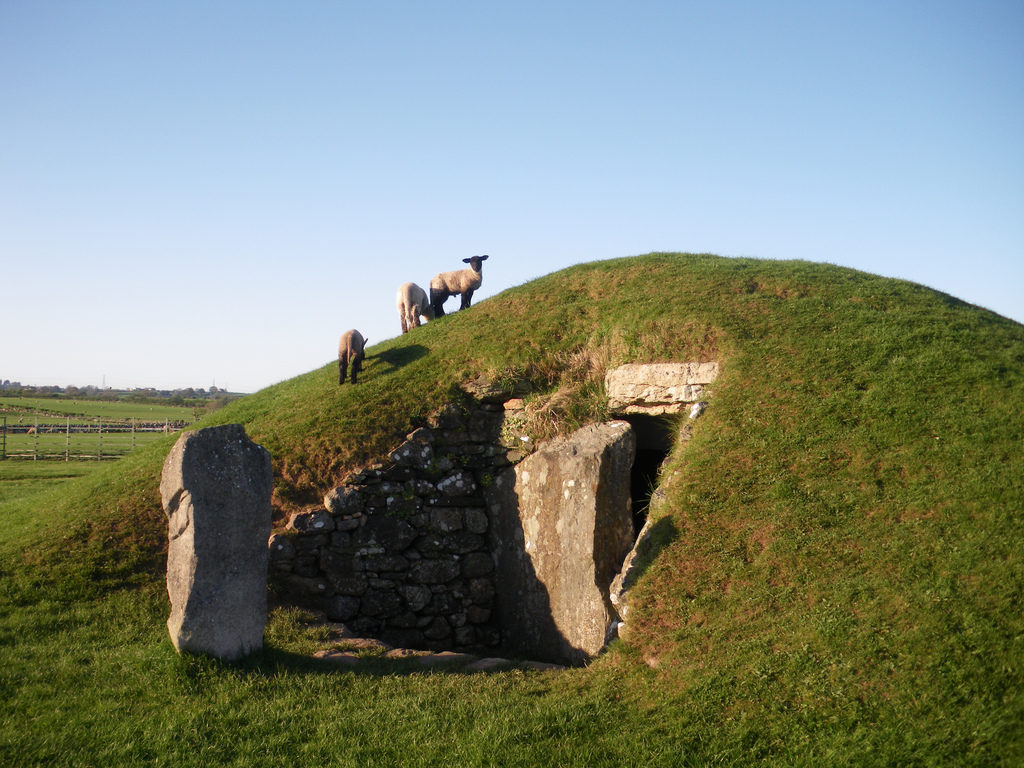 Wales, too, is a rich seam for stone hunters. The Bryn Celli Ddu barrow (meaning ‘the mound in the dark grove’) in Anglesey proves that Neolithic man was no stranger to building over his heritage, though – it’s a tomb built on top of an old henge. Maybe they felt like re-decorating. Find out more about its missing stone at the National Museum Cardiff. 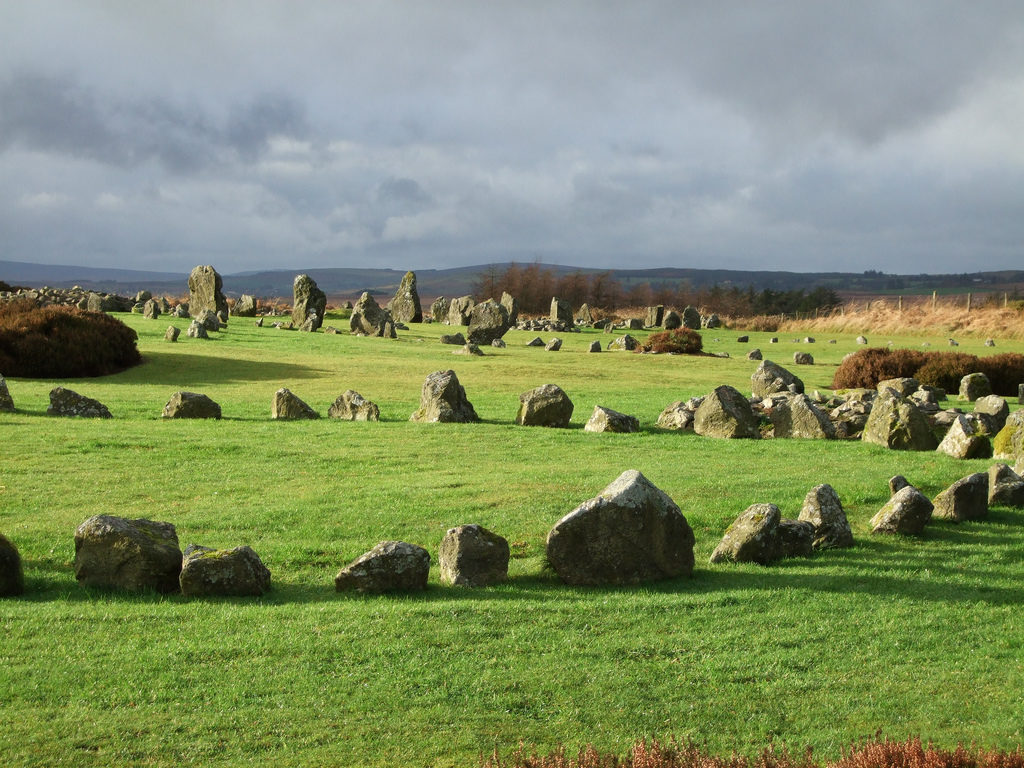 A lot of stone circles and megalithic tombs in Ireland were buried within a couple of thousand years of their being built – by peat bogs. Some of these have been discovered through peat-cutting, like the impressive Beaghmore complex in Country Tyrone. In Northern Ireland, the circles are made of small stones – the big ones were saved for tombs. 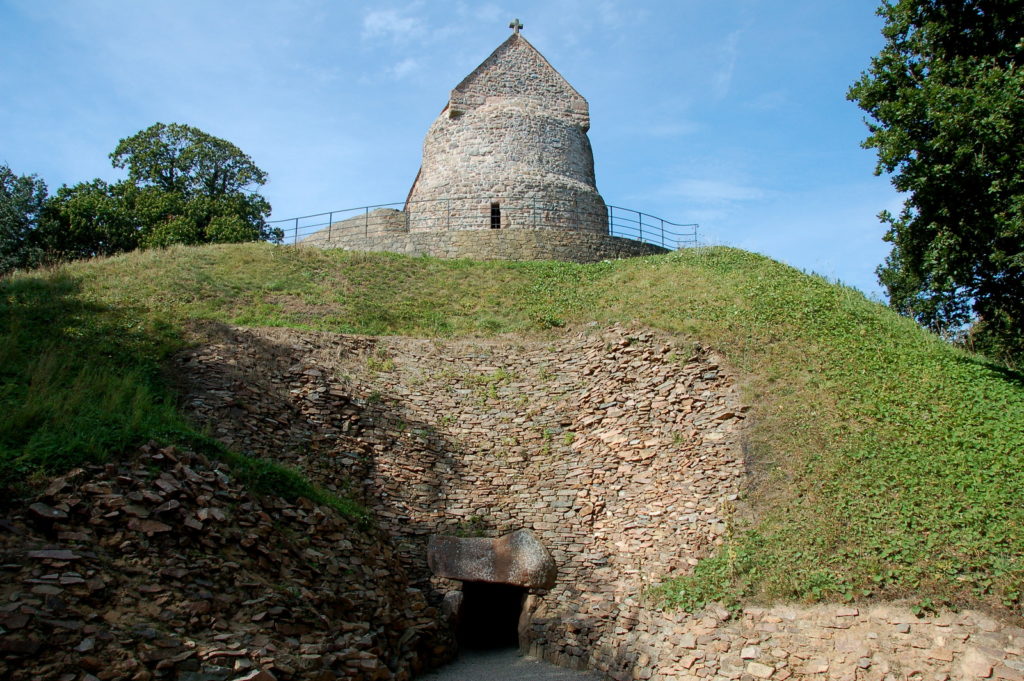