Whether they chronicle the victories of the Second World War or highlight how close we were to disaster in the Cold War, these top-secret underground locations have fascinating stories to tell. Here are some of our favourites. 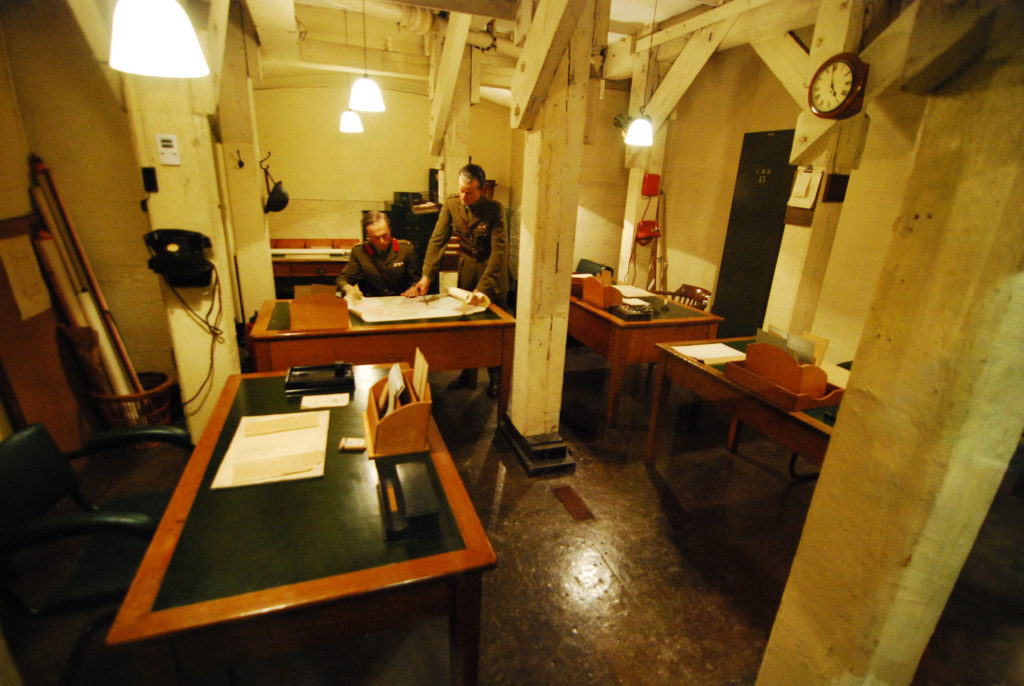 One of the Imperial War Museum sites, the museum takes you into the secret Cabinet War Rooms, the underground government command centre from which Winston Churchill and his inner circle orchestrated Britain and the allies’ involvement in World War Two. Constructed in 1939 in the basement of a building now housing HM Treasury, the war rooms became operational just days before the German invasion of Poland and the start of the war.

Walking through these subterranean rooms and corridors gives you a sense of the urgency and tension of the conflict. Visitors can take in the map room, left exactly as it was when abandoned in 1945, take a peek into Churchill’s office-bedroom, and even find the tiny hidden Transatlantic Telephone room, disguised as a private toilet, where Churchill would talk to the US president – all hidden under the streets of Westminster.

Together with the on-site Churchill Museum, the Churchill War Rooms also offers an insight into the character of the man who led Britain to victory – from one of his signature siren suits – a red velvet romper suit worn famously by Churchill throughout the war, to the ‘no whistling’ signs and Remington Noiseless typewriters especially imported from the US, because he couldn’t stand any noise distractions. 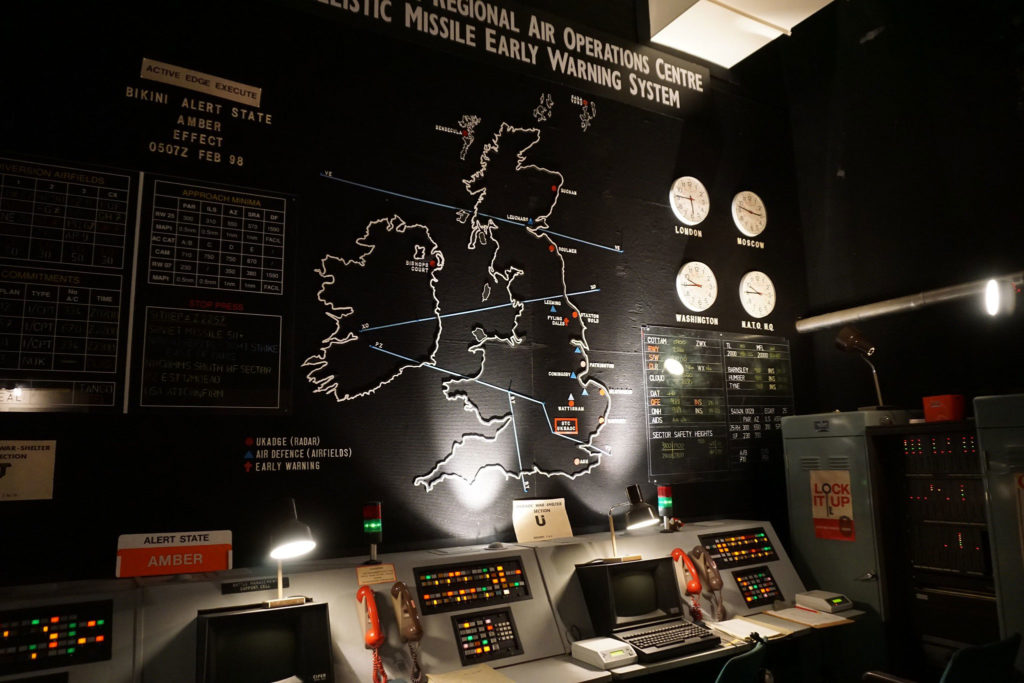 This previously top-secret facility, in peaceful, picturesque farmland on the outskirts of a sleepy Cheshire town, was primed to be the centre of Regional Government in the event of nuclear war. It was one of 17 such sites designed to enable the continuation of Government should the UK suffer a major nuclear attack. Operational from the 1950s, Hack Green was part of the elaborate ROTOR air defence radar system, a then-sophisticated early warning system and air traffic control base for military aircraft.

Now not so secret, the site is open to the public, with the decontamination room, sick bay, communications rooms, dormitories and more open to explore. There’s also a cinema, where you can watch the chilling The War Game, a pseudo-documentary produced to inform the public of what would happen in the event of a nuclear attack. The BBC deemed the film too horrifying for broadcast. There’s even a BBC studio, which would have been ready to communicate with what remained of the nation, if the unthinkable were to happen. 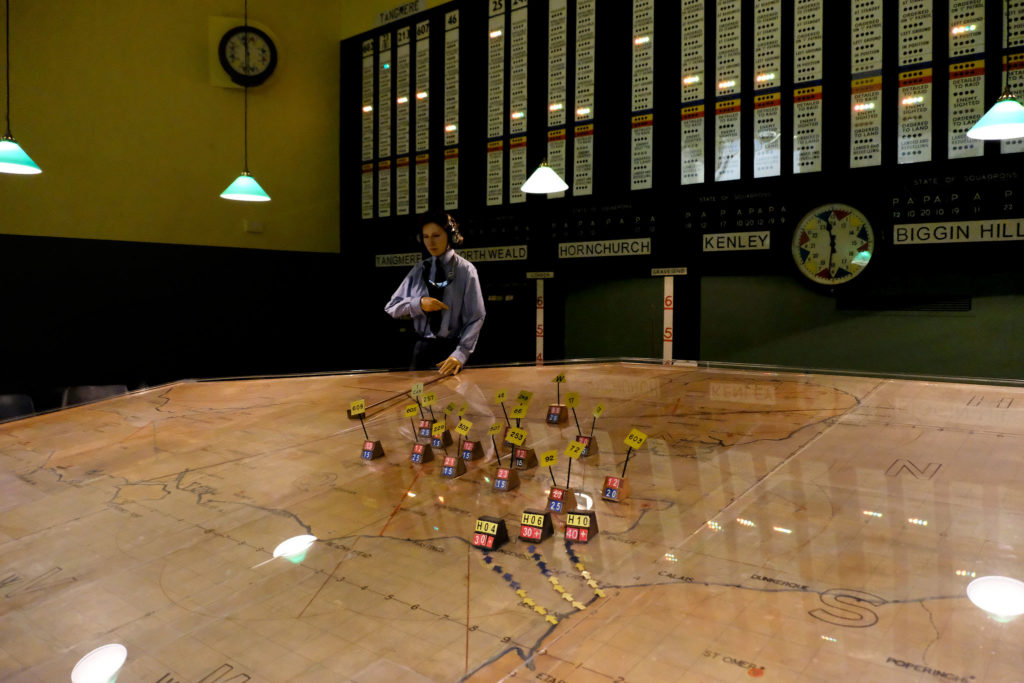 From this site in Uxbridge the Royal Air Force’s no. 11 Group were tasked with defending the capital and the South East from enemy attacks during the Second World War. The Battle of Britain was a major campaign fought in the skies over southern England for which Britain developed a sophisticated network bringing together technology, ground defences and air defences. It was from here that the group worked tirelessly to safeguard the nation and keep Hitler’s Luftwaffe at bay.

The Group Operations Room, now know as the Battle of Britain Bunker, sits 60 feet underground and the all-important Plotting Room is laid out exactly as it was when Churchill visited on 15 September 1940. Here you can see how the plotters and controllers coordinated aircraft from across the south to ensure one of Britain’s most important victories of WWII.

It is said that it was after a visit to the bunker during a day of battle that Churchill uttered the famous words “Never in the field of human conflict was so much owed by so many to so few.” 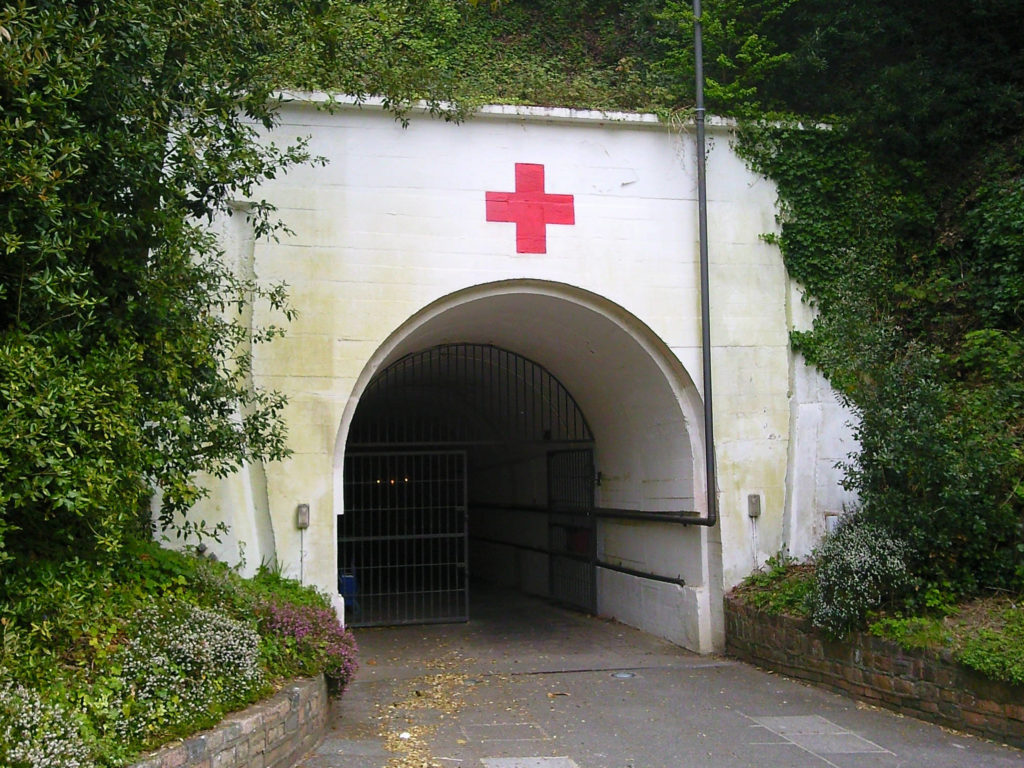 Dug deep into the Jersey hillside, this vast tunnel complex tells the story of the German occupation of the Channel Islands in the Second World War. The only part of the British Isles to be occupied by German forces during the war, the Channel Islands were firmly under German rule for the majority of its duration – from 1940 to 1945 – and formed part of Hitler’s Atlantic Wall fortifications.

The Jersey War Tunnels were originally built for German infantry to shelter from allied air raids but in 1943, with the threat of an invasion on German occupied Western Europe looming, it was converted into a hospital, with beds for up to 500 patients. As with many others built during Nazi rule, the site was constructed largely through slave labour, with terrible conditions for the workers who would have originated from all over Europe.

Now a museum, the War Tunnels serve as a reminder of the hardship endured by Channel Islanders during those five years, and a memorial to the slave workers. The museum charts the progress of Jersey’s experience in WWII, from the invasion and everyday life on the island, to the desperation, starvation and, finally, liberation. 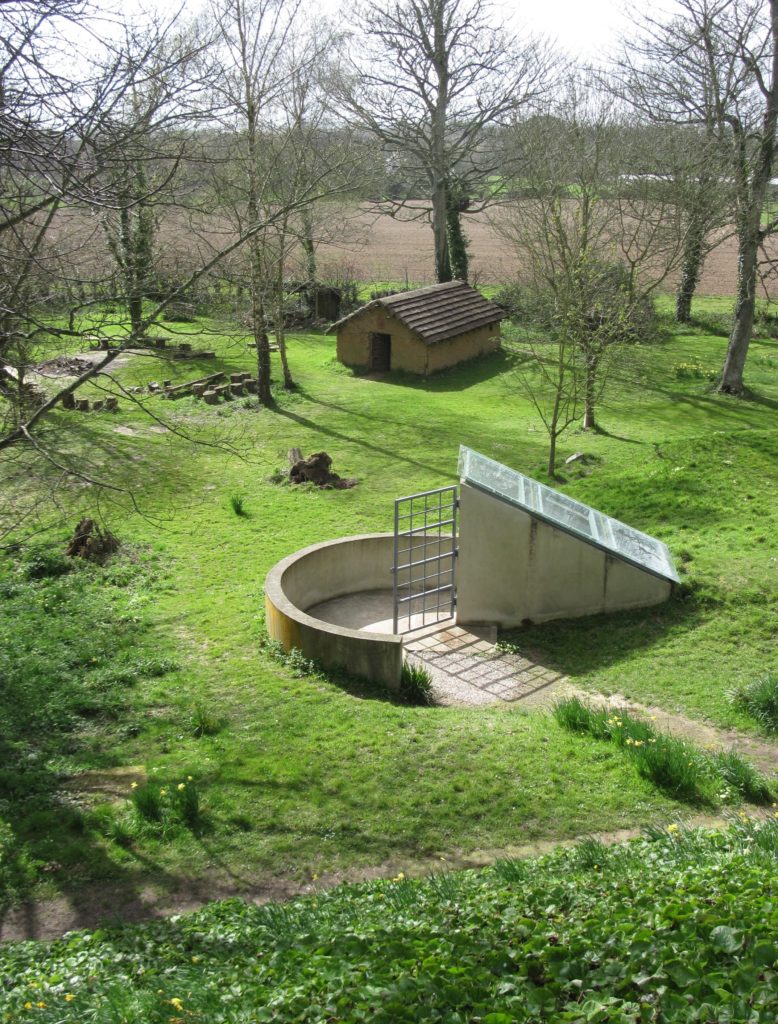 The bunker at La Hougue Bie

This bunker, situated on Jersey, was built during the German occupation of the Channel Islands in WWII. It sits in the historic site of La Hougue Bie, home to one of the ten oldest buildings in the world – a Neolithic burial mound with one of the best passage grave examples in Europe.

The bunker is built into the western side of the mound and was used as the headquarters of the East sector of occupied Jersey. Today the bunker remains as a memorial to the many slave workers who were forced to work in labour camps during the Nazi occupation of Europe, and to those who died on the Channel Islands at the hands of the Nazis.

Outside the entrance to the bunker a sculpture by Maurice Blik, himself a survivor of the notorious Belsen concentration camp, depicts a disjointed figure breaking free from the ground – a testament to the strength of the survivors, and a monument to the memory of the many victims. 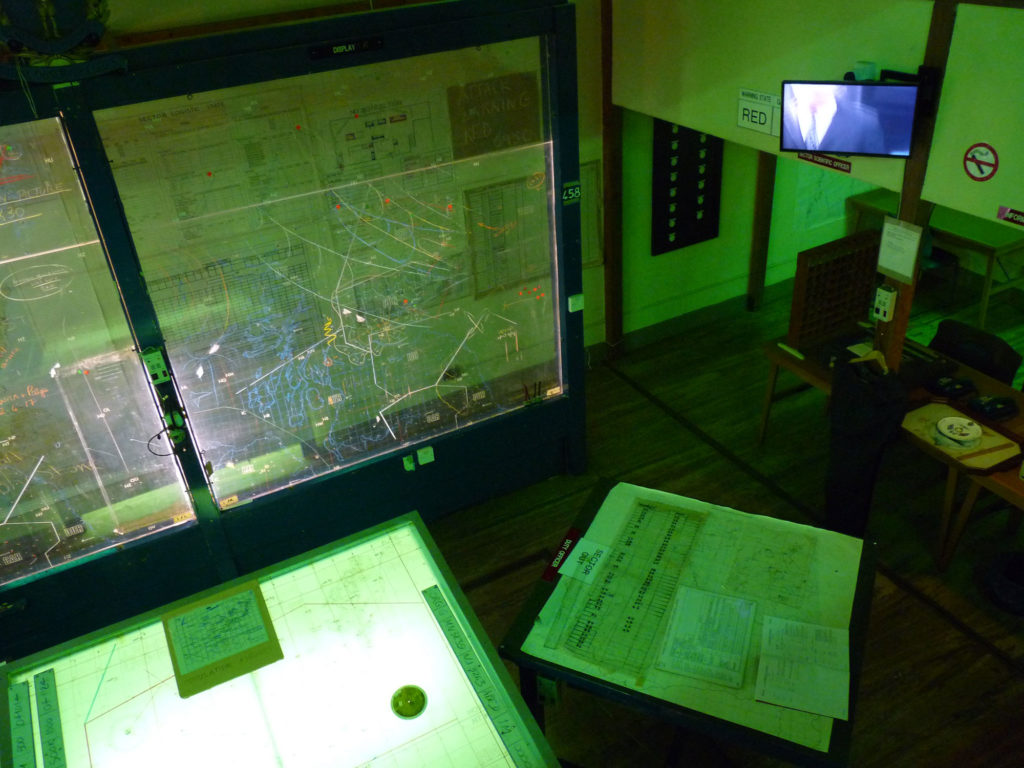 Hiding behind the façade of an unassuming (albeit heavily reinforced) farmhouse-looking building is the entrance to Troywood, Scotland’s Secret Bunker. Constructed almost 100 feet below ground, the bunker was built just 6 years after the end of the Second World War when geopolitical tensions gave rise to the 4-decade long Cold War, and was to be the centre of Scottish Government if Britain suffered a nuclear attack.

The bunker has three tonne blast-proof doors and is encased in ten feet of protective concrete. In the case of an attack, it could sustain 300 people. It was home of The Royal Observer Corps Dundee HQ, which would have been used to monitor any bomb drops, assist in evacuation and aid in distributing important resources. Today the HQ has been completely reconstructed with what was left behind after the end of the Cold War.

As well as the command centre – a series of rooms including the radar room and operations room – there are also six dormitories which operated on a ‘hot bed’ system, a chapel which had resident clergy throughout the Cold War, and a BBC broadcasting studio for transmitting emergency broadcasts. 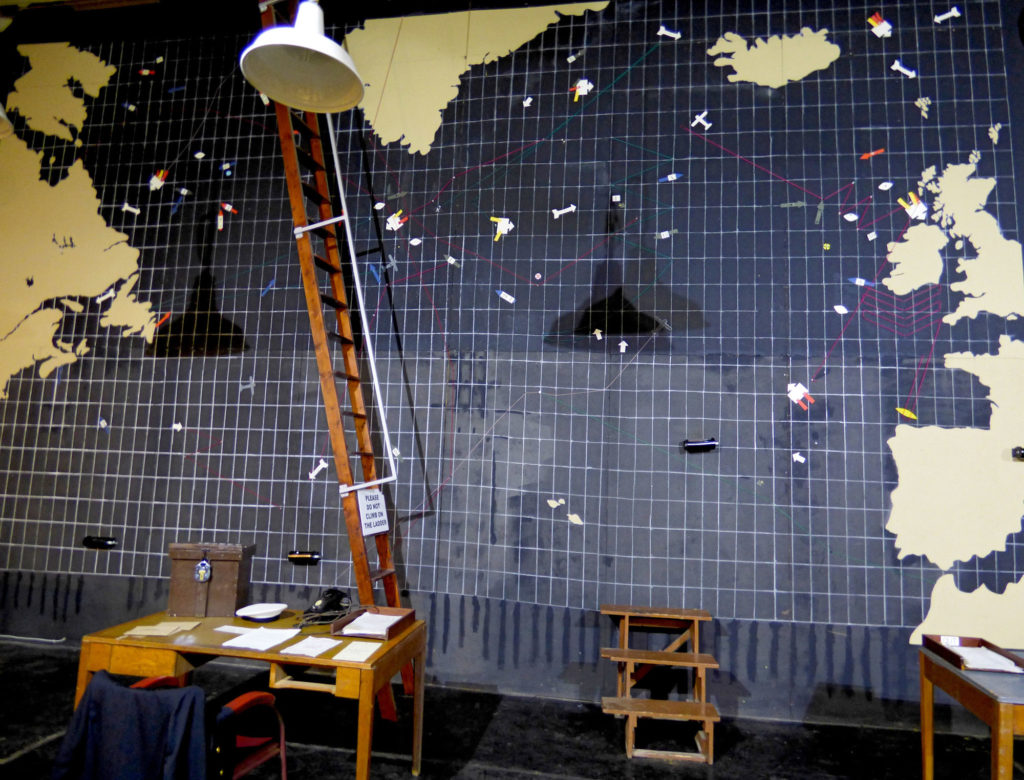 Known by locals as the ‘Citadel’ or ‘Fortress’ Western Approaches was the headquarters of Western Approaches Command, the forces responsible for keeping watch over the section of the Atlantic Ocean directly west of the British Isles during WWII. Liverpool, being a major port on the west coast, was central in maintaining a good relationship with America and Canada. This relationship enabled us to successfully import supplies into wartime Britain from the Allies during the Battle of the Atlantic, the longest Military Campaign in the Second World War which ran for the entirety of the war, from 1939 to 1945.

The command centre’s 100 rooms were encased in thick concrete, and the entire 55,000 square foot site was bomb-proof and gas-proof. After the war it was decided that the reinforced core of the bunker would be too expensive to demolish, so its fate as a museum was sealed. Today, visitors can explore the rooms, reconstructed as they would have been during the conflict, and see where the Royal Navy, Royal Air Force and Royal Marines worked together to ensure the safety of the British Isles in the only part of the war that Churchill confessed truly worried him. 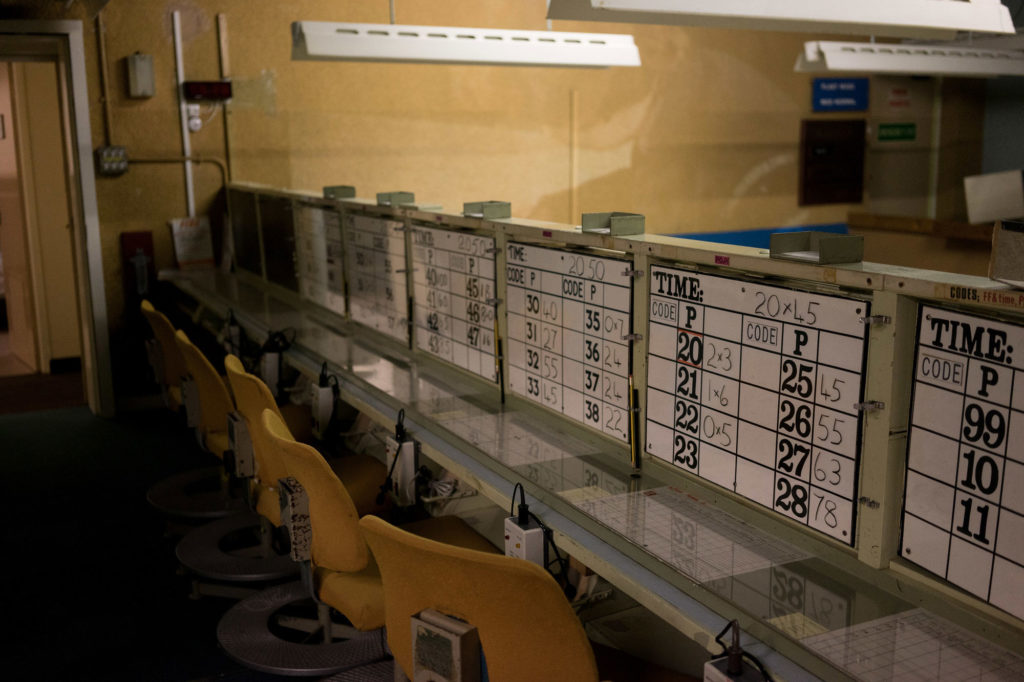 Built in 1961, and operational until 1991, York Cold War Bunker was the group headquarters of the Royal Observer Corps Branch 20, tasked with identifying, recording and measuring the impact of nuclear blasts. The bunker was manned by 60 ROC volunteers who, with the help of Home Office advisors served as a nerve centre in the event of an attack. The system relied on tiny, three-man bunkers positioned around the country, who would, in the event of a nuclear bomb detonating, relay the information back to headquarters so that the deadly fallout could be monitored and predicted.

Situated in the middle of a housing estate, the unassuming bunker houses one of only two remaining AWDREY (Atomic Weapons Detection Recognition and Estimation of Yield) computers, which could provide confirmation of a nuclear strike – 12 of these were placed at ROC stations around the country.

Fully restored, the semi-sunken bunker is a sobering experience, both for those who lived through the Cold War nuclear threat, and to those who may not have realised the terror that the previous generations faced. The only way to see the bunker is on a guided tour, which brings the past chillingly to life. 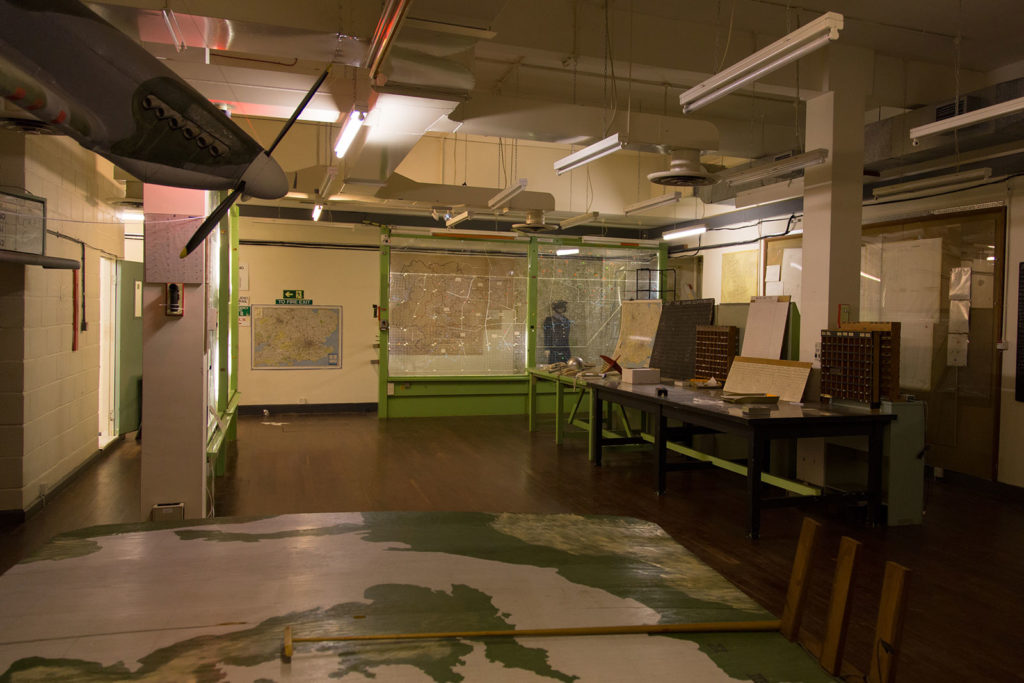 Built in the early 1950s, from the surface Kelvedon Hatch looks like any other ordinary bungalow. Its Cold War secrets lie 125 feet underground, across these three floors was the would-be home of central government in the event of a nuclear attack. Though never used, it was active up until 1994, when it was sold back to the farming family who owned the requisitioned land.

Another former RAF ROTOR site, the bunker went through three iterations of use, first as part of the air defence network, then as a Regional seat of Government and finally as Regional Government Headquarters. The individuals inside the bunker were to ensure the continuity of government in the case of a catastrophic event, and allocate surviving supplies to whoever on the outside remained. The bunker could accommodate up to a whopping 600 people for up to three months before running out of supplies.

Today, an audio tour takes you through this not-so-distant past. Step inside the plotting room where workers would have monitored nuclear explosions on large Perspex maps, discover where the Prime Minister would have stayed had they visited the bunker, and visit the sick bay and dormitories.