While most of these scientists are household names, a couple have slipped somewhat into obscurity. We owe a lot to these great thinkers, creators and problem-solvers; here’s our selection of the best places to see where they lived and worked 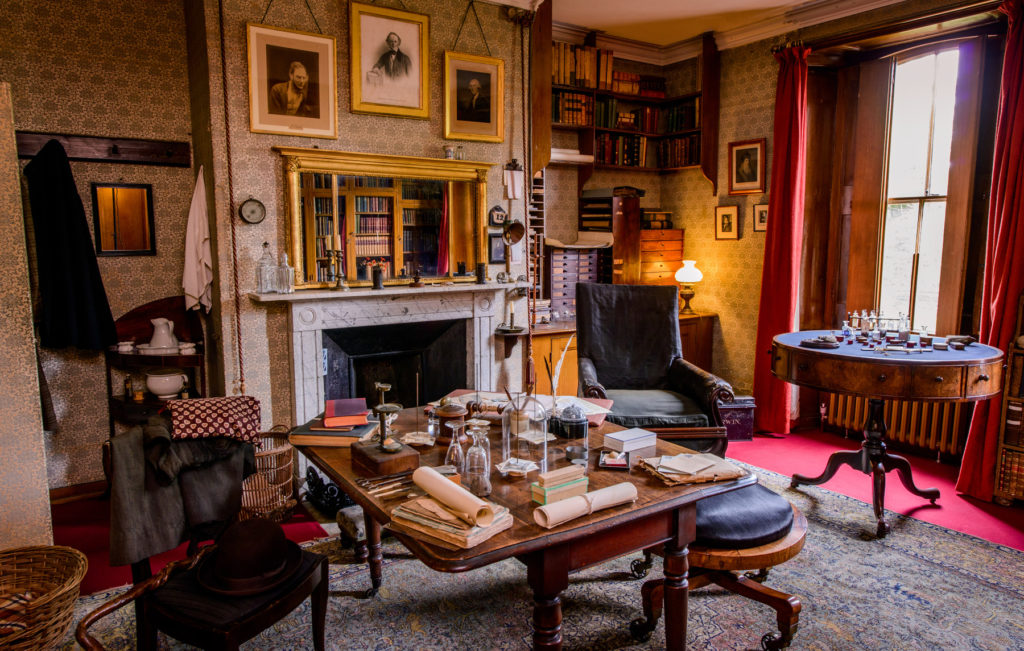 The interior of Charles Darwin’s home, Down House. © English Heritage.

Seeking refuge from the noise and pollution of central London and in need of extra space to accommodate their expanding family, Charles Darwin and his wife moved with their children to Down House, in rural Kent, in 1842. Darwin spent most of his adult life at the house, and eight of his ten children were born here. Darwin remained at Down House until his death in 1896.

Darwin did not instantly take to the house and he made many alterations and extension over his lifetime, including the characterful three storey bay window, which was added shortly after moving in.

Several of the downstairs the rooms are presented as they would have been during the Darwins’ time here – the drawing room, where his wife Emma would play the piano; the old study, where Darwin spent most of his time reading and writing, and the dining room and billiards room. Upstairs the master bedroom has been restored, including a reconstruction of the Darwins’ collection of fine art prints.

Outside you can see Darwin’s greenhouses, where he conducted many of his botanical experiments, and The Sandwalk, a quarter-mile circular path that Darwin had constructed. He would walk his ‘thinking path’ several times a day with his dog by his side. 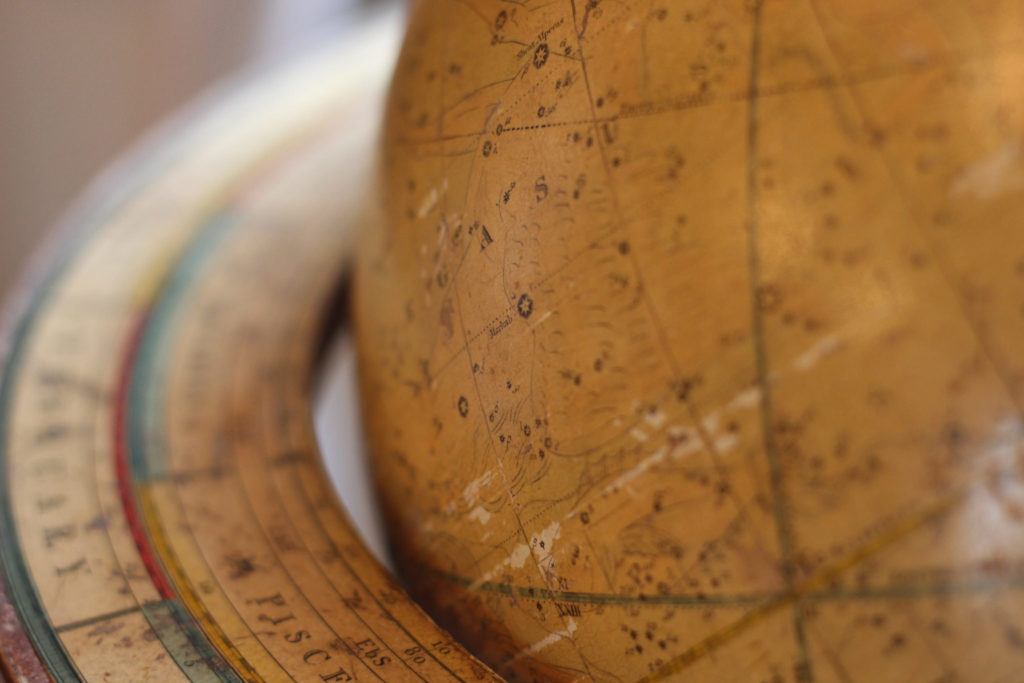 A globe at the Herschel Museum of Astronomy © Mike Gifford (CC By-NC 2.0)

In 1781 in the back garden of number 19 New King Street, a modest Georgian terraced house in Bath, a most remarkable discovery was made. It was home of William Herschel, an amateur astronomer described by Sir Patrick Moore as the greatest telescope maker of his day, and his sister Caroline. Using a seven-foot rosewood telescope made in the workshop in his home from polished speculum metal cast in horse dung, William Herschel discovered Uranus, thus doubling the known celestial world.

Caroline, who would assist William, was also an accomplished astronomer in her own right. She discovered several comets and was the first woman to be awarded a Gold Medal of the Royal Astronomical Society in 1828.

Today their house is fully restored in the style of the period, and contains globes and planetaria, rare books belonging to the Herschels and replicas of William’s mirror-polishing machine and the seven foot telescope used to discover the planet Uranus. 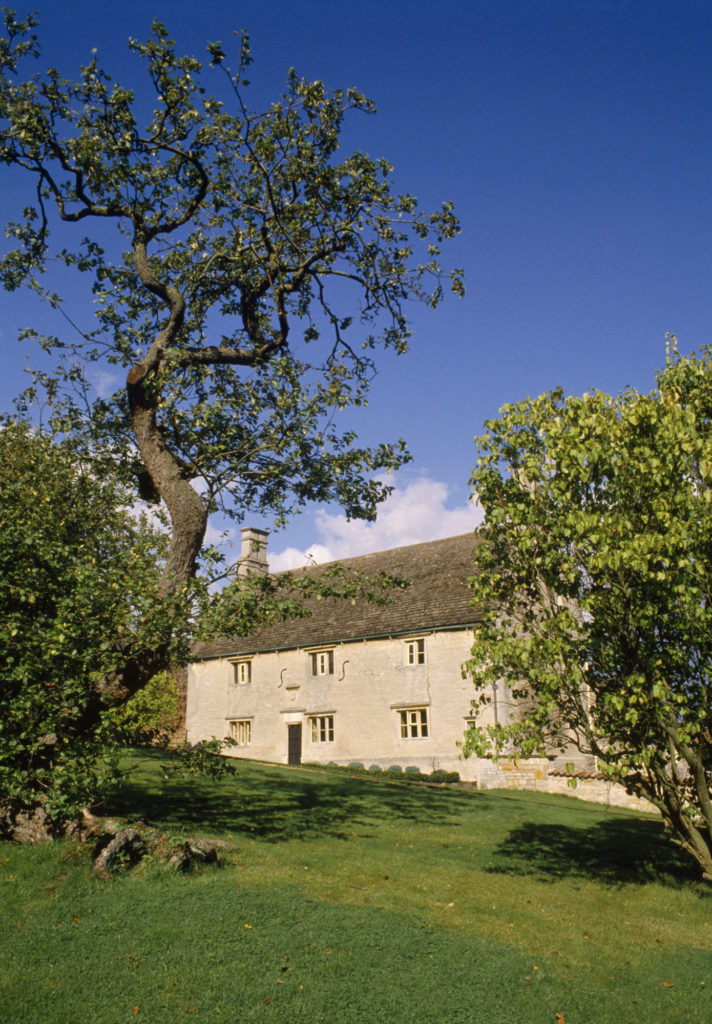 A view of the exterior of Woolsthorpe Manor in early 17th century where Sir Isaac Newton was born in 1642. ©National Trust Images/Tessa Musgrave

The world of science as we know it would not exist without Sir Isaac Newton and his work on the laws of motion, modern physics and engineering. The birthplace and family home of one of history’s most influential scientists, Woolsthorpe Manor is a simple farmhouse overlooking a small orchard.

When the plague gripped Britain, and Cambridge University closed its doors, Newton returned home to Woolsthorpe and spent 18 months obsessively experimenting and theorising. This was to become the most productive time in his career, and in the history of physics.

Home to what is quite likely the world’s most famous apple tree, now around 400 years old. A falling apple from the tree is said to have inspired his theory of gravity. In one of the farm buildings hands-on exhibits give visitors the opportunity to see Newton’s theories in action. 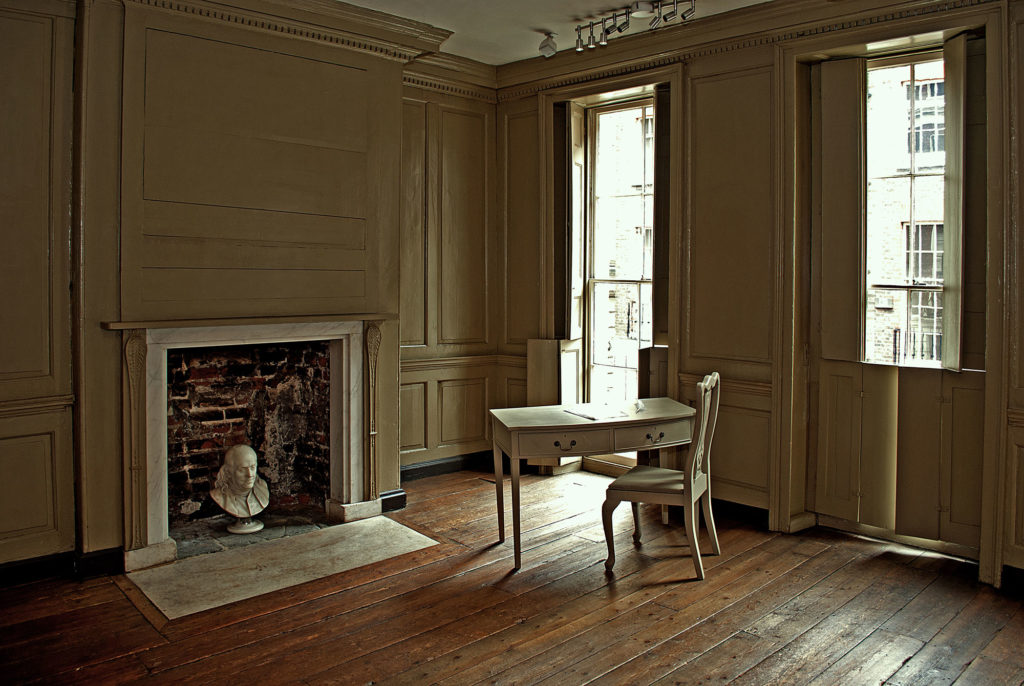 Not just known as one of the founding fathers of the United States, Benjamin Franklin was a true polymath who wore many hats, including those of a politician, activist, publisher, inventor and scientist.

The only former home of Benjamin Franklin anywhere in the world, Franklin lodged at this house on Craven Street between 1757 and 1775, having been sent to England as a diplomat tasked with ensuring an amicable relationship between the US and London, making the house the first de facto US embassy.

He also spent his time in London pursuing his interest in science, becoming a member of Birmingham’s famed Lunar Society, a learned society for natural philosophers and intellectuals, which saw him mixing with the likes of James Watt, Josiah Wedgwood and Erasmus Darwin. Franklin made many discoveries to help us better understand the phenomena of electricity, which he proved could be harnessed from lightning with his famous kite experiment. As well as this, we can thank Benjamin Franklin for lightning rods, bifocals and the delightfully bizarre but ethereal-sounding glass harmonica. 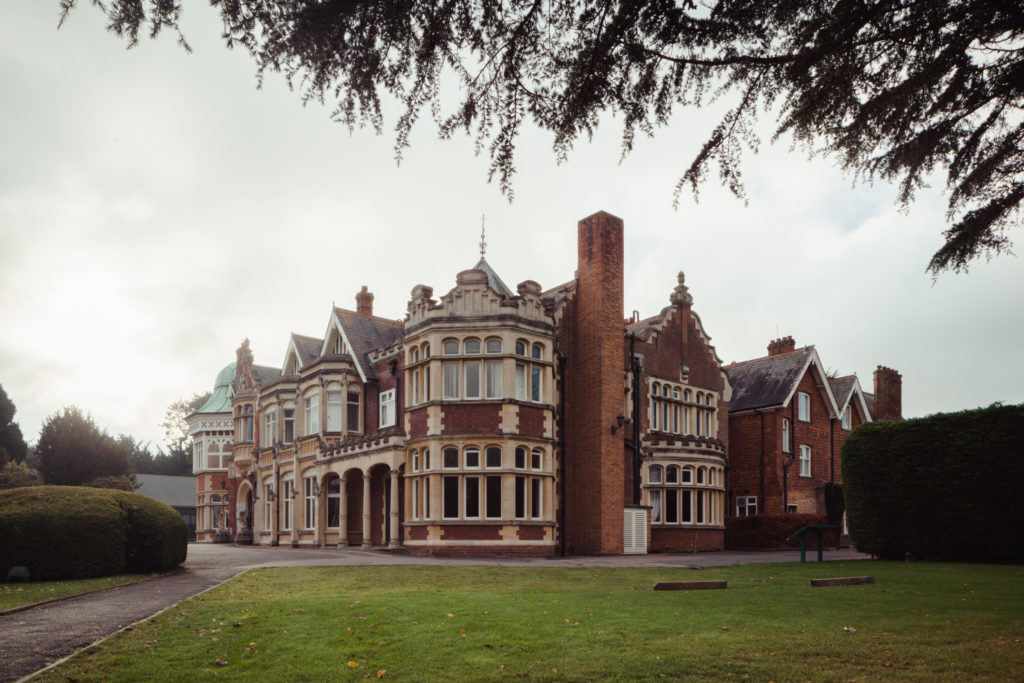 Bletchley Park, where the British codebreakers worked during the Second World War.

Strategically placed on the midpoint of the Varsity line – the train line running between Oxford and Cambridge – Bletchley Park was the central site of British and Allied codebreakers during World War Two. A key figure in the breaking of German ciphers, computer scientist and cryptanalyst Alan Turing reported to Bletchley Park the day after war was declared in 1938. It is thought that Turing’s work at Bletchley saved millions of lives during the war, and it has been suggested that the work of Turing and his co-workers actually helped shorten the war by up to four years.

Bletchley Park today is open to the public to visit as a heritage site, with visitor centre and museums showcasing the significant and incredibly rare collections about wartime codebreaking. The codebreaking huts are furnished as they would have been during the war, and tell the stories of the codebreakers working to decipher, translate and distribute German messages. The hut which housed the Bombe machines designed by Alan Turing have been restored and refurbished, and contain a replica Bombe used to demonstrate the complex machinery. Hut 8 houses interactive exhibits as well as Alan Turing’s office, set out as it would have been in WWII with his trademark mug chained to the radiator. 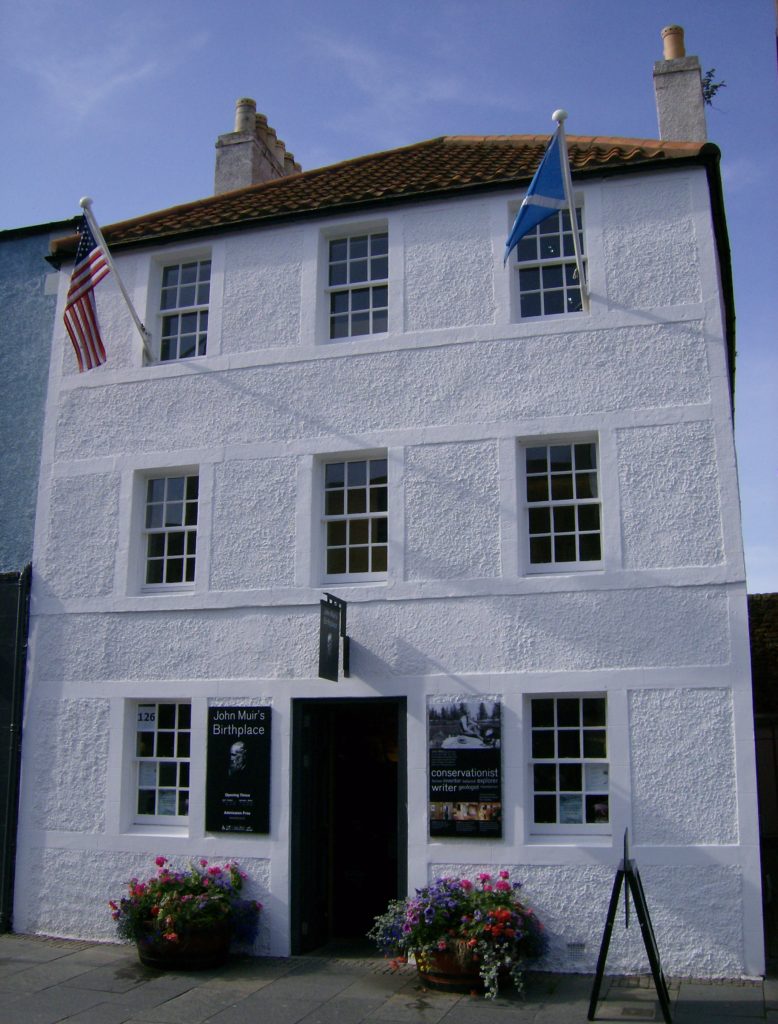 Before emigrating to America aged 9 where he would gain notoriety by exploring and protecting some of America’s most awe-inspiring areas of natural beauty, celebrated naturalist and preservationist John Muir lived in the coastal Scottish town of Dunbar.

Muir journeyed to Yosemite, a place he instantly fell in love with and set about protecting for future generations to enjoy. With an almost obsessive adoration for the natural world, the Scottish-American geologist and botanist established the world’s first national park system – a concept now used across the globe to ensure the conservation of sites of great beauty and natural importance.

Today, the house he was born and grew up in is a museum celebrating his legacy and telling the story of his fascinating life. Nearby is the start of the John Muir Way, named in his honour, which links his birthplace with Scotland’s first national park, Loch Lomond and the Trossachs. 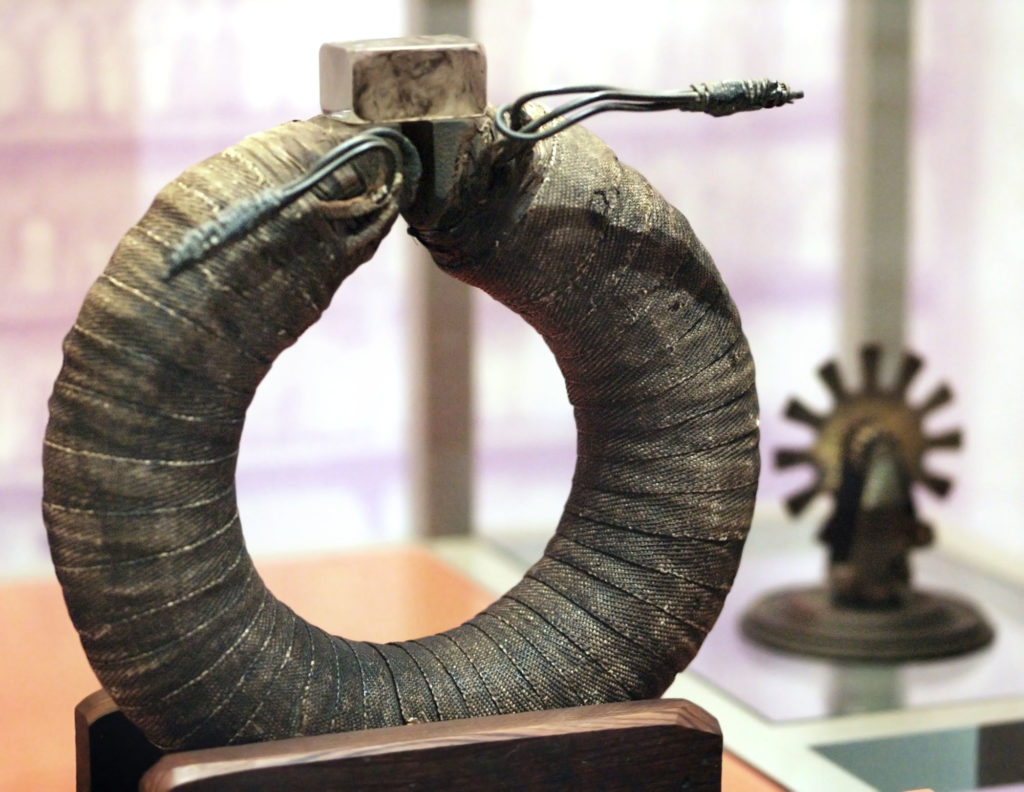 Though easily mistaken for a reconstruction, the Faraday Museum houses Michael Faraday’s actual magnetic laboratory, in which he made his important discoveries in diamagnetism and the magneto-optical effect. The room, in the basement of the Royal Institution, has been preserved and arranged as it would have been in the 1850s, and forms the heart of the Royal Institution’s museum exploring the world-changing inventions and discoveries of the Ri since 1799.

Best known for his tremendous advances in harnessing electricity for everyday use, we can also thank Faraday for the electric motor, the faraday cage and party balloons. One of the most prolific scientists of the 19th century, Faraday’s discoveries at the Royal Institution electrified the world. He also founded the institution’s famous Christmas Lectures which have run every year since 1825, bar a few years during Word War Two.

The museum is a treat for any science fan and features equipment and specimens from some of the world’s most famous experiments. Highlights include many of Faraday’s apparatus, Humphry Davy’s original chemical element samples, and John Tyndall’s ‘blue sky tube’ an experiment which explained why the sky is blue. 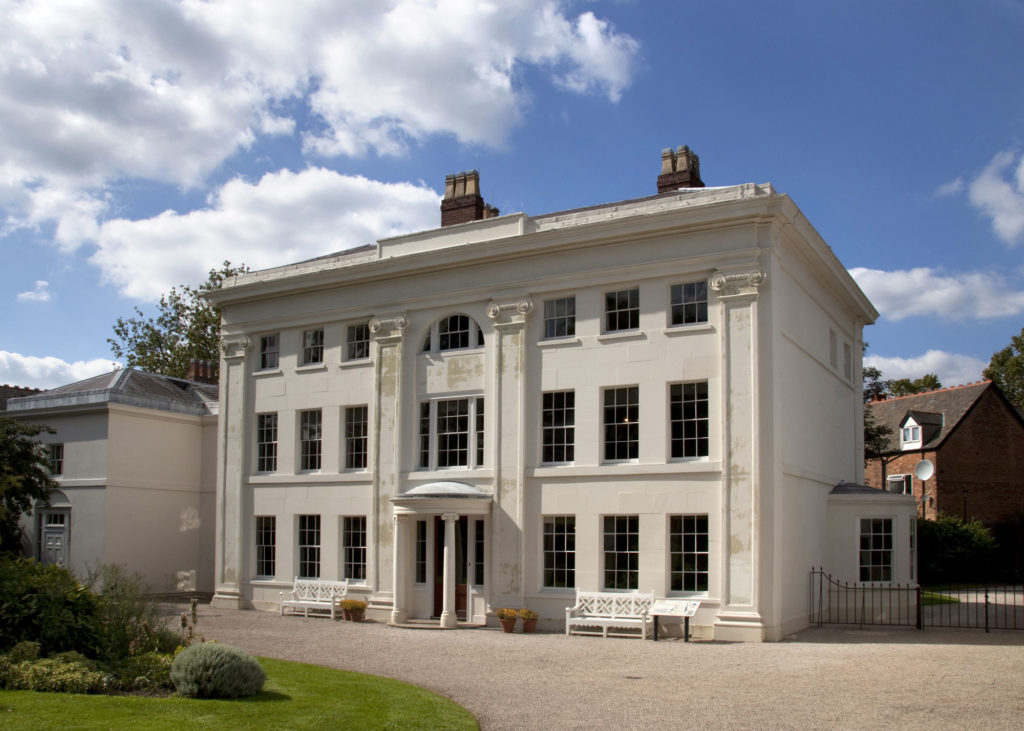 Soho House, the home of Matthew Boulton and the meeting place of the Lunar Society © Tony Hisgett (CC By 2.0)

Soho House, in Birmingham, was the home of entrepreneur and industrial pioneer Matthew Boulton from 1766 to 1809. His partnership with Scottish scientist James Watt enabled Watt to complete his improvements of the steam engine, effectively kick-starting the Industrial Revolution. Importantly, Soho House became the preferred meeting place for the Lunar Society – a highly influential learned society of thinkers and natural philosophers who would gather to share their ideas and discoveries, which included several of history’s most important scientists.

Highlights include the room where ideas were born and history was made: the dining room, meeting place of the Lunar Society where the likes of Joseph Priestly, Erasmus Darwin and Benjamin Franklin would meet on the full moon to trade ideas.

A polar opposite to Boulton’s elegant home, James Watt’s former cottage workshop is now a ruin in the grounds of Kinneil House. Watt’s former partner Dr John Roebuck lived in Kinneil House, and supported Watt’s early experiments in steam power until he went bankrupt and lost his rights to the patent. While it looks insignificant, Watt made important advances in improving the existing Newcomen engine here, and a large part of one of watt’s experiments – an iron cylinder – remains outside the cottage. 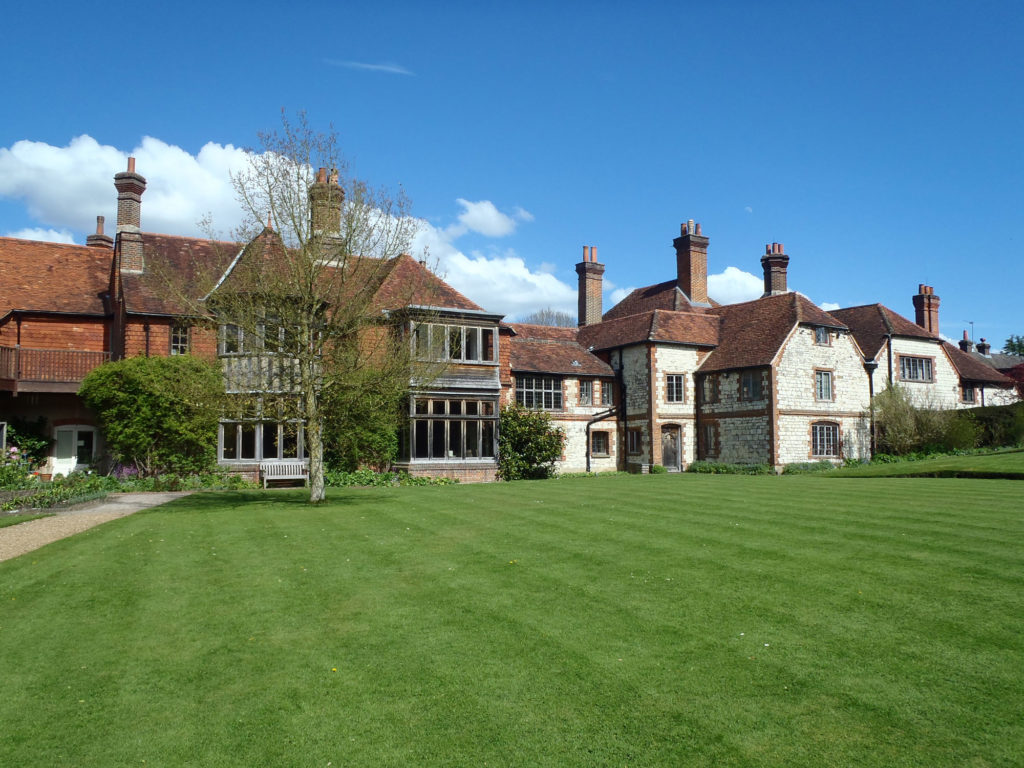 The home of Gilbert White, the pioneering English naturalist and ornithologist. © Gilbert White & The Oates Collections

A pioneering 18th century naturalist and ornithologist who was hailed as England’s first ecologist, Gilbert White was working a century before Darwin, who admired White and even took a pilgrimage to White’s home of Selborne, the location in which White penned his most celebrated accomplishment. White’s world-famous book The Natural History and Antiquities of Selborne has been continuously in print since it was published in 1789.

White is famed for his observational skills and meticulous attention to detail – a talent which ensured his success in identifying and distinguishing species, and set him apart from other naturalists of the time His poetic style made his book not only popular with fellow naturalists, but with literary figures such as Coleridge and Woolf.

White’s respectful attitude towards nature, appreciating every being for its role in the environment’s delicate balance, is said to have helped shape our modern attitude and helped us understand that though ‘despicable’ in appearance, even the humble earthworm has an important job to do.

Gilbert White’s House is now a museum, the rooms having been restored based on descriptions in his correspondence. On display at the museum are items of contemporary furniture, White’s chair and wall-hangings and the original manuscript of his famed book. 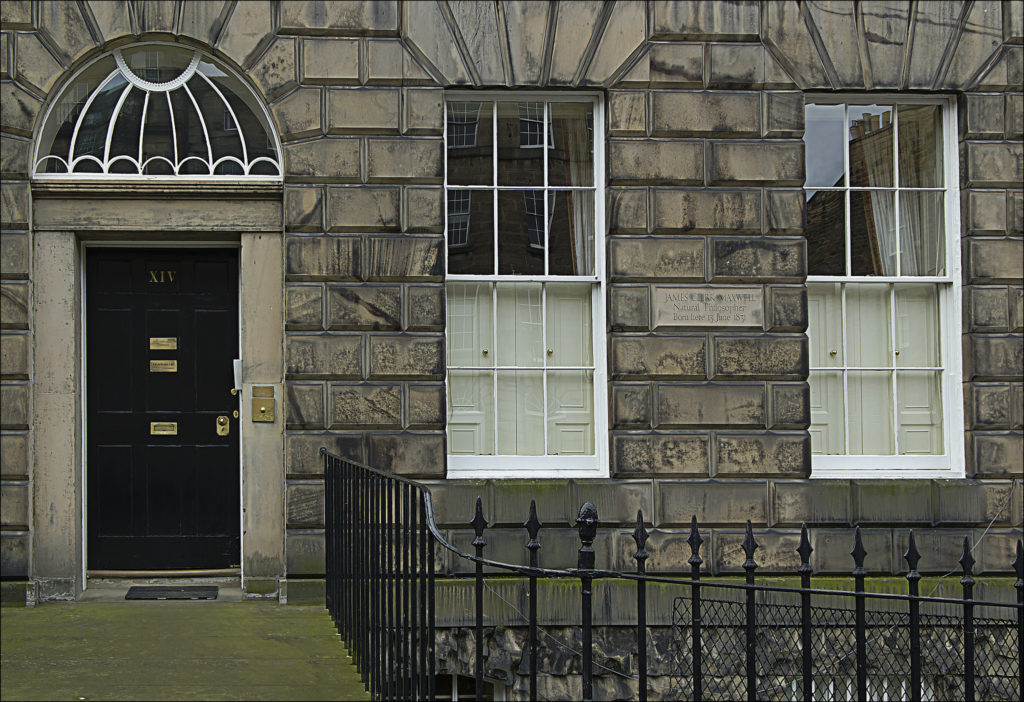 Voted one of history’s most important scientists – coming in third after Isaac Newton and Albert Einstein – James Clerk Maxwell is likely to be the greatest scientist you’ve never heard of. Born in Edinburgh in 1831, Maxwell’s work in colour theory, physics, mathematics and especially electromagnetism was the greatest advance in scientific knowledge since Newton.

Though Maxwell spent very little time in this house on Edinburgh’s India Street – the family moved to their estate Glenlair when Maxwell was just an infant – the house is now home to the James Clerk Maxwell Foundation, established to raise awareness of Maxwell’s important work.

The foundation operates a small museum, open by appointment to anyone wanting to learn more about this important, but often overlooked, figure. The museum has a wealth of material associated with Maxwell and his colleagues, including portraits, manuscripts and books.