Dr John Bevan, chair of the Historical Diving Society at the Diving Museum in Gosport, on a collection telling the story of the mysterious Commander Lionel ‘Buster’ Crabb and the dawn of underwater frogman warfare in World War Two

Commander Lionel ‘Buster’ Crabb first came to fame during the Second World War in Gibraltar where he was involved with a team of divers removing the mines planted by Italian human torpedo squads and other saboteurs on Allied ships.

He did some very brave things, for which he got the George medal, yet to a certain extent his reputation in Gibraltar has been heavily exaggerated – partly thanks to a film called the Silent Enemy with Lawrence Harvey playing his part.

Sadly the film gives Crabb the credit for just about everything and for leading the team of Royal Navy divers in Gibraltar, yet in truth he never led them, another man called Lieutenant Bill Bailey was in charge. Many of the heroic things that Bill Bailey did were attributed to Crabb in the film and unfortunately that is what many people still believe.

He ended up with the nickname ‘Buster Crabb’, because he was around at the same time as the American actor Buster Crabbe, who was famous for playing Buck Rogers and Flash Gordon, but he didn’t like the nickname and in truth they couldn’t have been any more different. 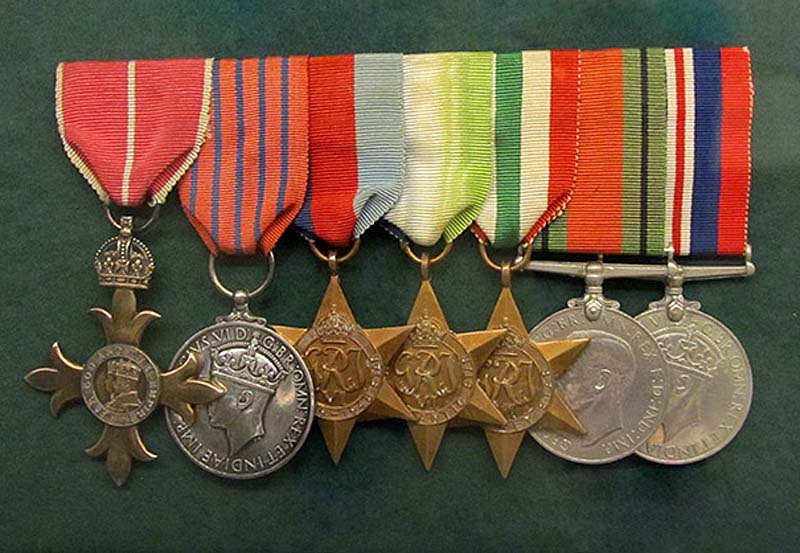 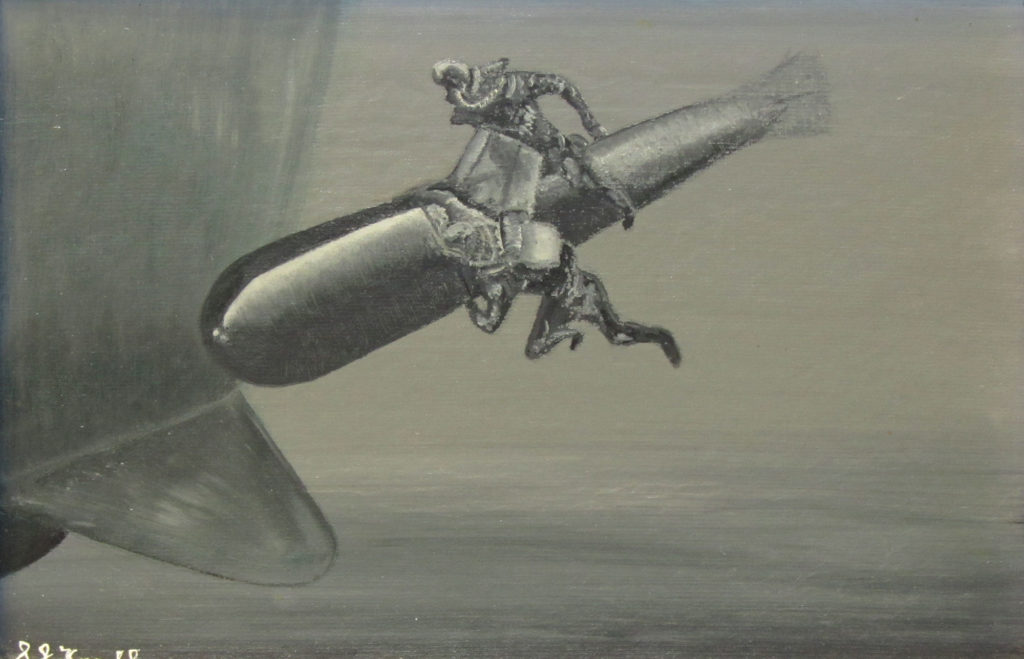 A painting by Syd Knowles recreates his underwater exploits at Gibraltar. Courtesy The Diving Museum Gosport

Crabb was a bit of an eccentric character and apparently people either liked him or hated him. There were two different schools of thought in the Navy about him.

He was in the Royal Navy Volunteer Reserve (RNVR), which means he was slightly different culturally from the career Navy people and he had the unpopular tendency to fraternise with the lower ranks – get pissed with them basically – which wasn’t the done thing for officers.

Commander Crabb, his boss Bill Bailey and his partner Syd Knowles were some of the Royal Navy’s first frogmen, because most diving before then was hard hat, copper helmet or what we call ‘standard helmet’ diving.

They were called the Underwater Working Party (UWWP), Gibraltar, with the acronym UWWP and their job was to remove and disarm mines in Gibraltar harbour – the term is ‘rendering safe’. Just a handful of guys, it started off as the three divers and grew to just half a dozen or so. Crabb himself joined the team towards the end of the conflict.

This was the dawn of underwater frogman warfare and the Italians were way ahead of us. Gibraltar was the first time we had come across frogmen, so it took us a bit by surprise. We didn’t understand what was happening for a very long time because they were so clever and good at it. In the end we captured a couple of their ‘human torpedoes’, studied them and copied them and within months we were using our own ‘human torpedoes’ against the Italians.

The human torpedo was basically an underwater chariot, shaped like a torpedo. It was a very slow moving thing because it had two men sitting on it, which meant it could only do about two or three knots. 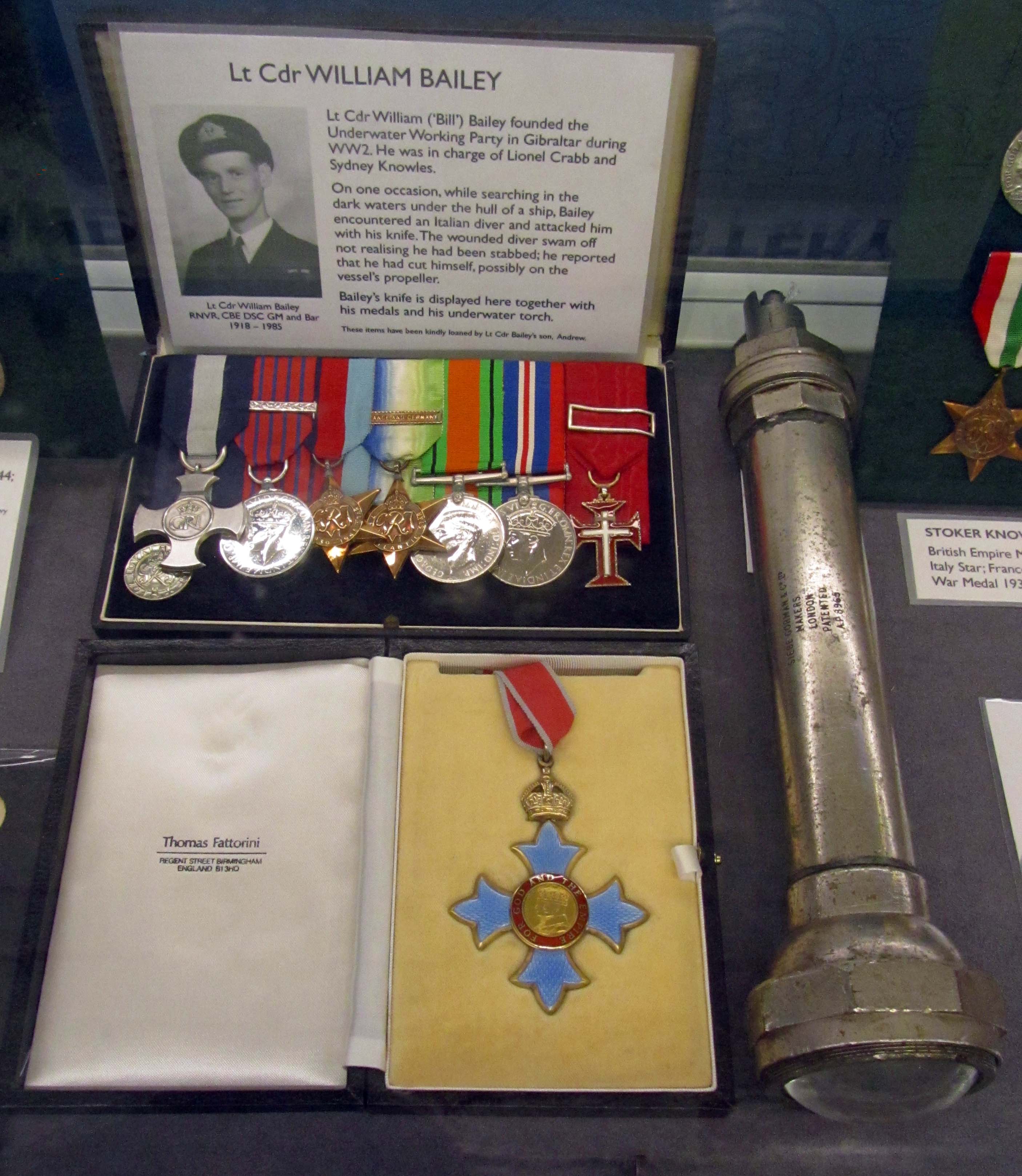 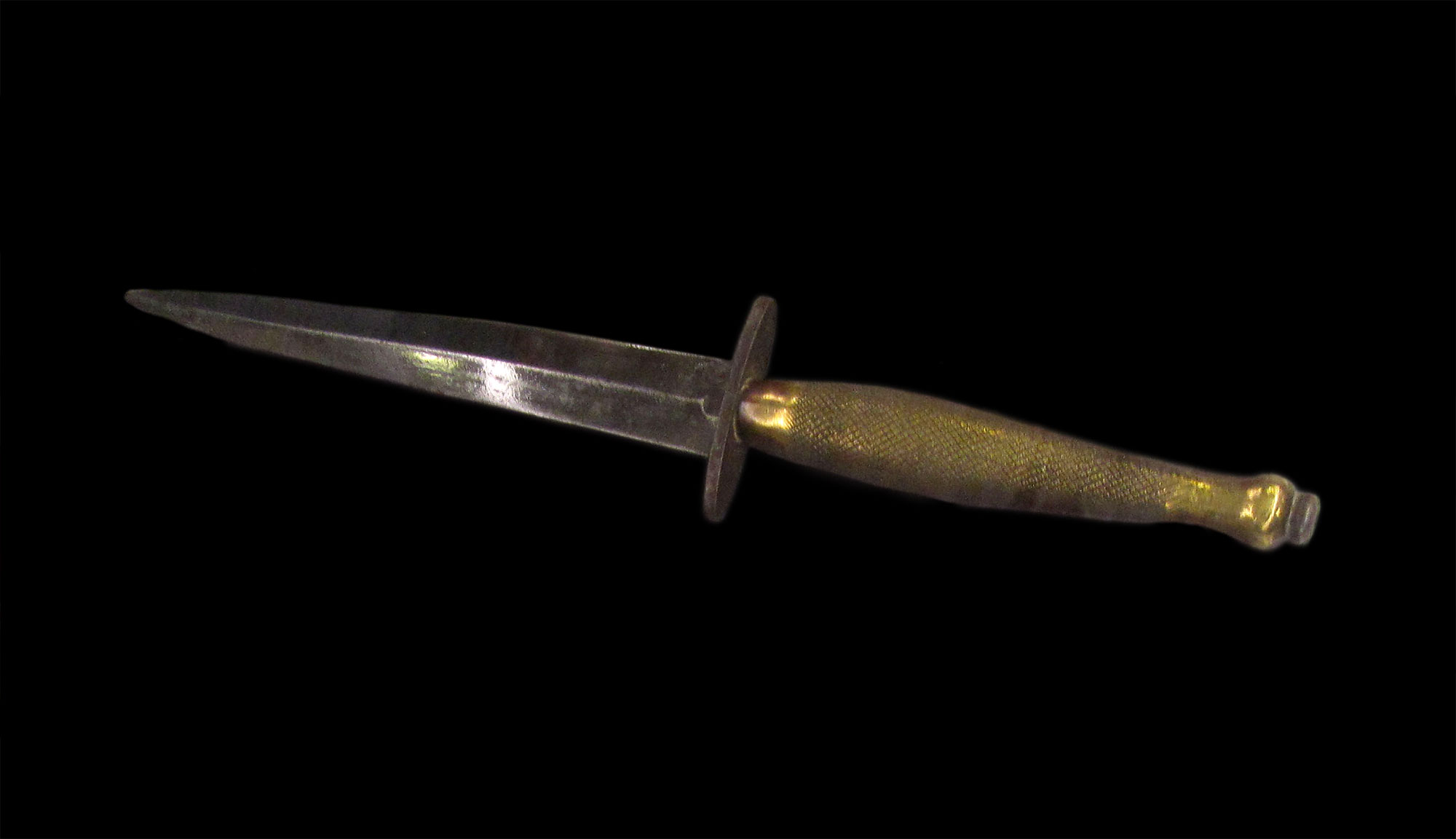 The Italians developed two kinds of attack in Gibraltar, the first attempts were with the human torpedoes, which they initially launched from a submarine inside Gibraltar Bay. Then they tried underwater swimmers, swimming from the beach towing mines, which they placed on Allied ships just a few hundred yards offshore – and they were very successful at that.

They then had the very clever idea of launching manned torpedoes from inside a ship across the bay in Algeciras. They cut a hole beneath the water line and began launching their human torpedoes out of an underwater hatch, travelling across the bay, planting their mines and then coming back again. They were using neutral Spain, which was illegal of course, to launch their attacks.

Ian Fleming was in MI6 and knew Crabb and the guys from the UWWP when all of this was happening and the story goes that he based James Bond on Crabb because of the exploits they had in Gibraltar countering the Italian forgmen. There’s even a scene in Thunderball for example where divers dive on a crashed aeroplane; Crabb and the team dived on a crashed bomber in which Sikorski, the leader of the Polish Army, was killed and they went down to recover his body and papers etc.

“It remains a big mystery because it’s actually still classified”

Following his exploits in Gibraltar after the war, Crabb did various jobs for the Navy then ended up as a civilian, but still in the RNVR. I think he found civilian life hard.

He did a few jobs for MI6 and the last one was an investigation underneath a Soviet Cruiser in Portsmouth Harbour, the Ordzhonikidze, which had brought Soviet leaders Nikita Khrushchev and Nikolai Bulganin to the UK in April 1956. And that’s when he disappeared.

It remains a big mystery because it’s actually still classified, although some information has been released. Basically he was on a spying mission for MI6 and although there are many theories about his disappearance I think he almost certainly drowned because he was unfit. He was a heavy drinker, a heavy smoker, he was getting on a bit at 47-years of age and he had been drinking heavily the night before.

His body eventually washed up 14 months later in Chichester Harbour – and even then there was some controversy as to whether it actually was his or a substitute body put in there by MI6. It was half eaten away by underwater creatures, which made it difficult to identify, but the coroner eventually decided it was his body and issued a death certificate. The whole episode of course made him even more famous. 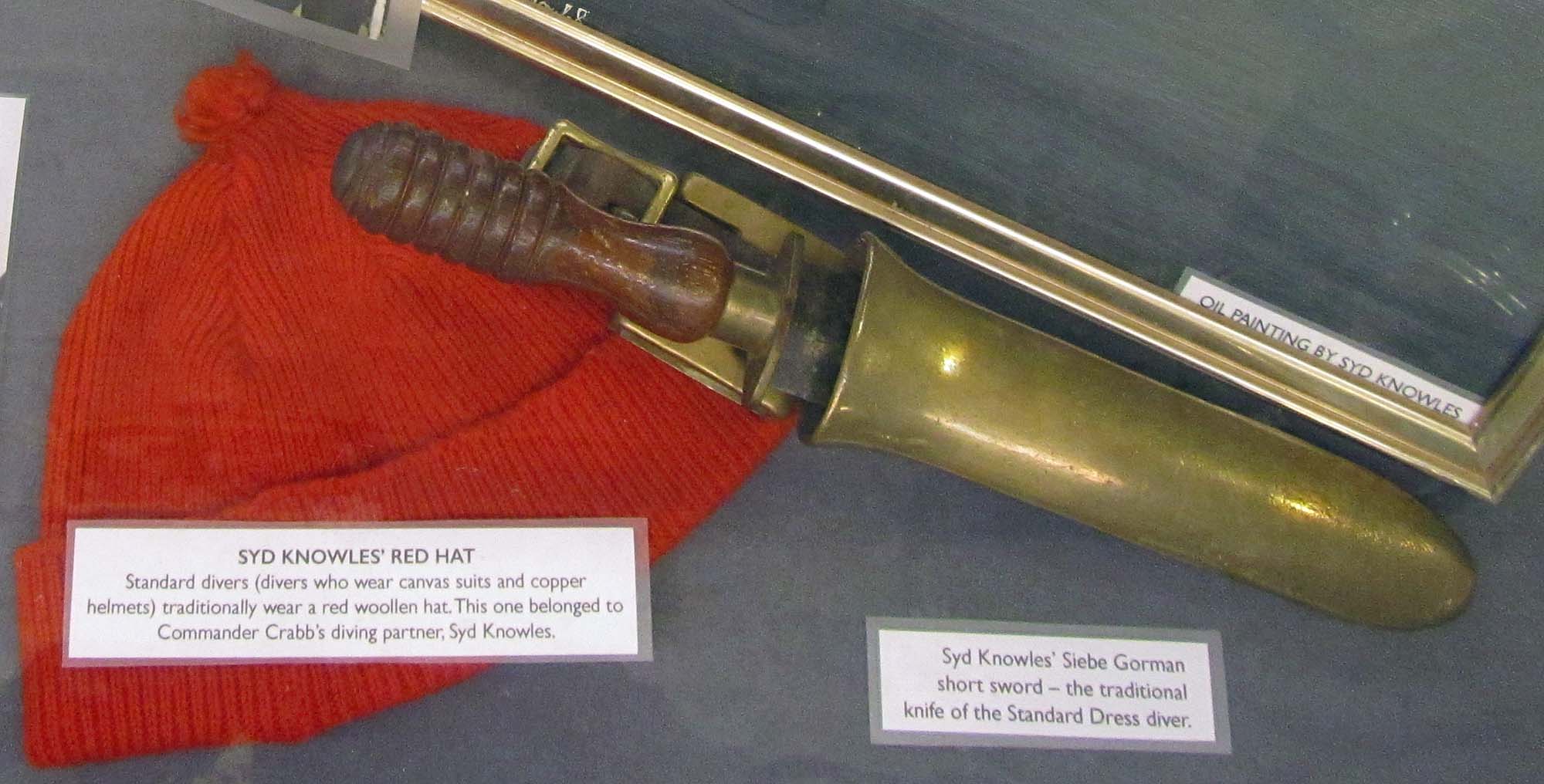 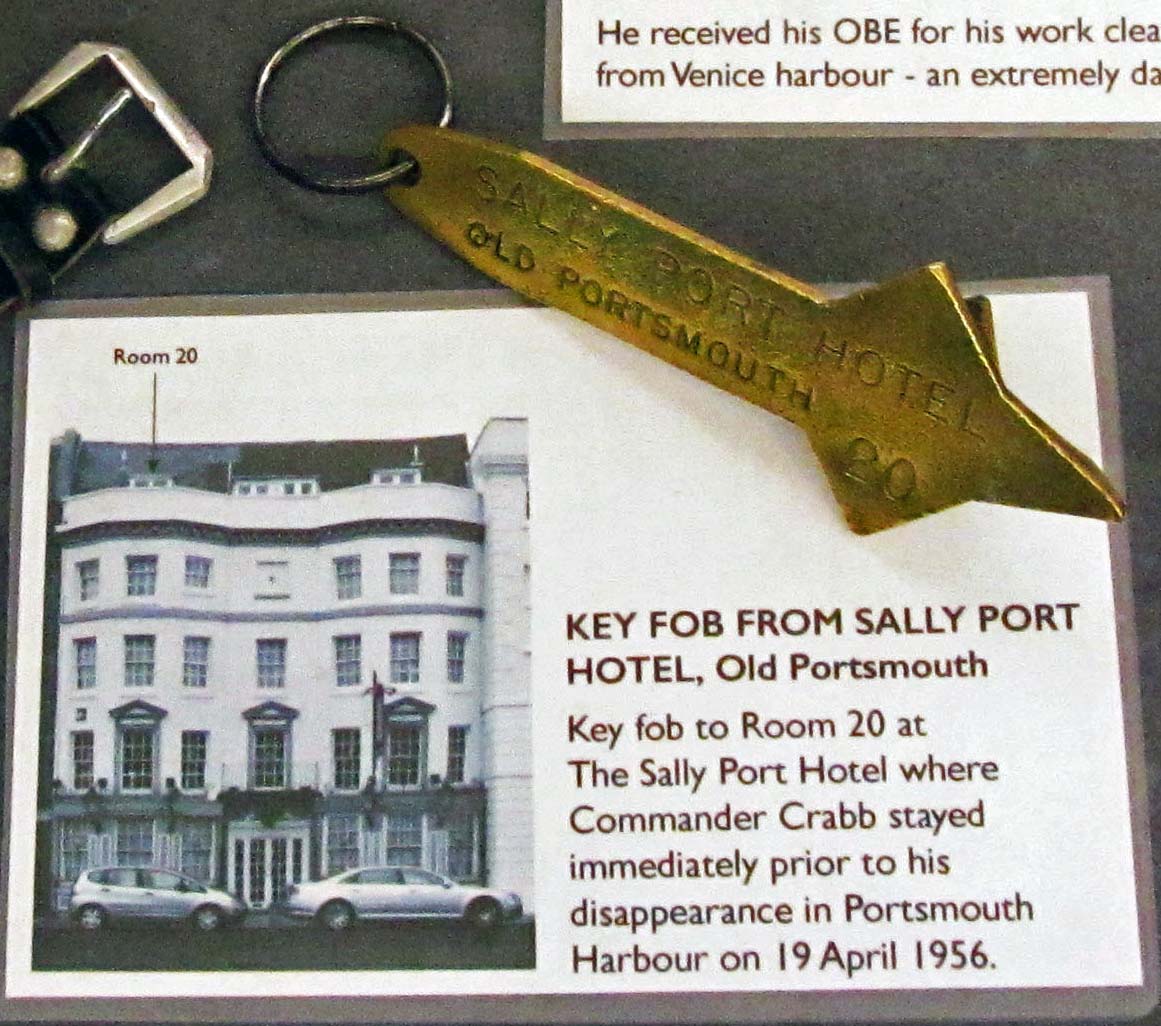 The key fob to Commander Knowles’ hotel room where he stayed on his last night alive. Courtesy The Diving Museum Gosport

As well as Commander Crabb’s medals, we have the key fob from his room at the Sally Port Hotel, in Portsmouth which was a well known local hotel where he stayed on his last night alive.

We also have his underwater wrist compass and the contents of his ditty box, which is a secure box where he kept valuables. This was rediscovered just a few months ago and contained his passport, his fountain pen and other documents.

There was an officer’s mess in HMS Vernon, a land-based establishment which is now Gun Wharf Shopping Centre, with accommodation for people staying there for short periods of time and some officers had these boxes for keeping valuables in. When HMS Vernon was decommissioned, the officer in charge of the mess tried to find the owners of the boxes and because Crabb was no longer with us he took it home, put it in his loft and forgot about it.

“These are objects that really tell a story”

He rediscovered it a couple of months ago and he and another ex-Navy colleague opened the steel padlocked box and gave the contents to the museum.

We also have items from Bill Bailey including his medals and his Commando knife, which he used to attack one of the Italian frogmen when he bumped into him on one occasion underwater at Gibraltar. We also have Sydney Knowles’ medals, his diver’s woolly hat, diver’s knife and two oil paintings that he made about his work in Gibraltar.

These are objects that really tell a story and when people come to the museum they like stories about people, so this collection is one of our most popular exhibits.

As for Commander Crabb and his namesake Buster Crabbe; they were poles apart in both character and physique. The Hollywood actor Buster Crabbe was an Olympic swimmer while Commander Crabb of the Royal Navy could barely swim 200 yards. He was a short man of five foot five or six, extremely unfit and he was almost proud of his unfitness.

But to be fair some of the stories about him and the mystery surrounding his death detract from the good work he did. His heroism can’t be questioned and he died serving his country.

Dr Bevan is the author of several books on diving and diving history including Commander Crabb: What Really Happened?

It is not yet popularly known, but Gosport is the home of the global diving industry. The co-inventor of the diving helmet, John Deane, lived in Gosport from 1835 to 1845 during which time he discovered the Mary Rose. The first diving helmet ever sold by the inventors was to…