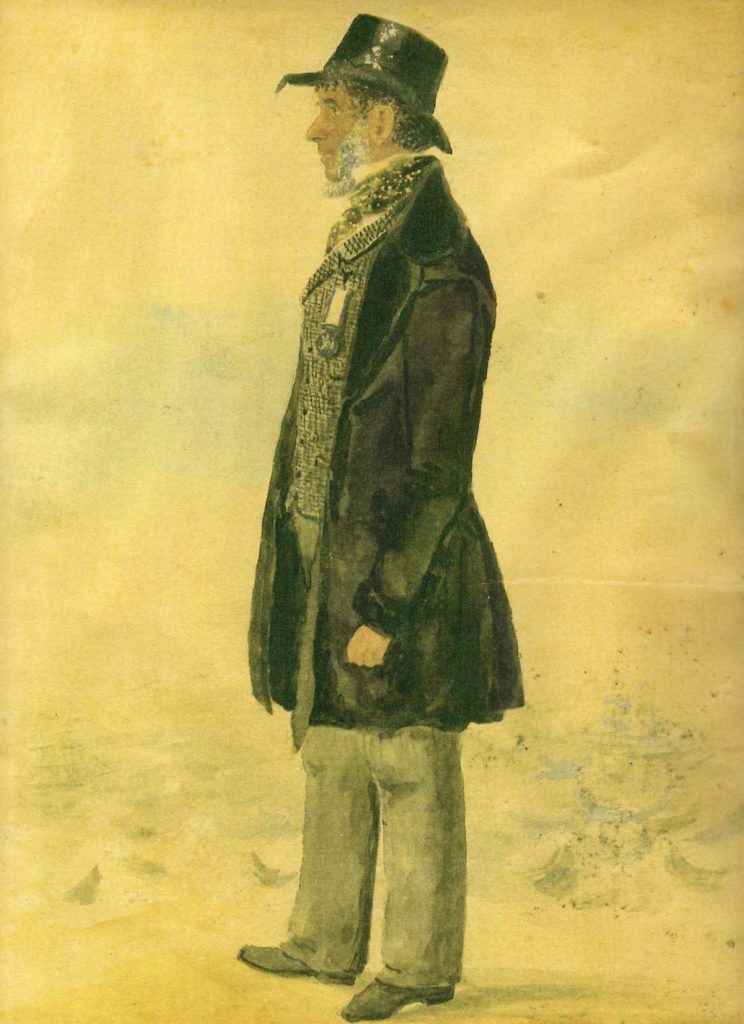 John Simmonds, a veteran of the Battle of Trafalgar and Black Greenwich Pensioner, (c.1784-1858), Courtesy of the family of John Simmonds.

Museum Crush talks to author, historian and curator SI Martin about the stories of Black veterans of the Royal Navy as an important new exhibition opens at the Old Royal Naval College

Mainly due to its long maritime associations London’s Greenwich (and by association its sister area, Deptford) has long been a place of mixed classes and Black communities, which have been resident there for over 200 years.

It’s also the site of the Greenwich Hospital – The Royal Navy’s permanent home for retired seamen from 1692 to 1869 – now the Old Royal Naval College, and a new display there is using the local area as a lens to examine the social and political history of Britain’s maritime and naval past, uncovering the varied personal stories of the men who lived there.

“Some of the wealthiest people in the country who had made money off the processes of enslavement lived in Greenwich,” says author, historian and curator of the exhibition, SI Martin, “as did individuals who were actually enslaved, ordinary working class people of all backgrounds.

“In the midst of all this you have this institution, the Seamen’s Hospital, in which you find this spectrum of Black sailor – former Royal Navy personnel living there as Greenwich pensioners.” 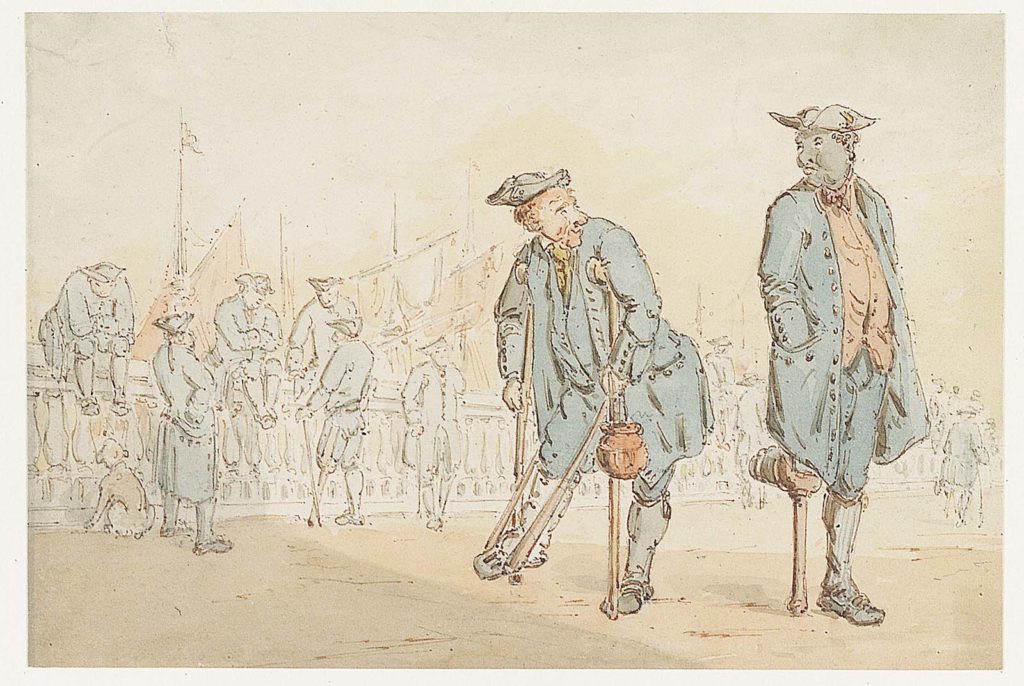 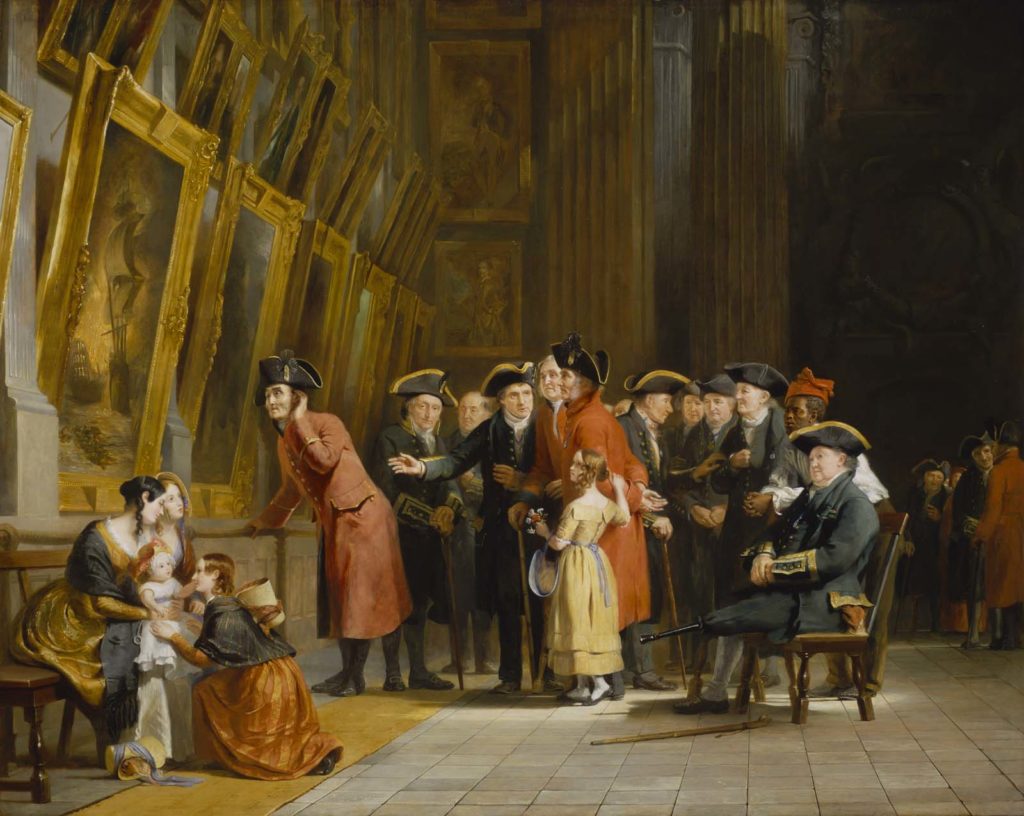 Andrew Morton, The United Service, 1845, The Black Greenwich Pensioner is John Deman who served with Nelson in the Caribbean

In the eighteenth and nineteenth centuries Greenwich pensioners were very public figures, and very much part of the public conception of Greenwich. They would be seen walking around in their distinctive blue jackets, helping tourists, and the Black pensioners would have been part of that.

These men ran the full gamut of backgrounds – from people like John Thomas who had run away from enslavement in Barbados to join the Royal Navy, to Frederick Ziegler who was a former Mayfair publican and people like Richard Baker and John Simmonds who were both Trafalgar veterans.

Reflecting the reach and influence of the Royal Navy and the burgeoning tendrils of the British Empire, the men came from a wide variety of places; Baker was from Philadelphia, Simmonds was from Jamaica and Ziegler was from Suriname.

“Frederick Ziegler is an extraordinary character,” says Martin, “we know about him because as well as a publican in 1808 (the Landlord of the Cock and Lion on Wigmore street, which is still there in the same place, with the same name), he was also a Freemason.

“The fact of him joining the Freemasons caused some consternation and the conditions of his freemasonry were investigated by his fellow masons, but he remained a mason until he went to sea. After his service in the Royal Navy he became an inpatient – actually residing at the Hospital.”

Documenting the contribution of these men to Royal Navy, to their local Greenwich community, and even the British abolitionist movement, Martin has amassed an impressive haul of archive records, paintings, prints and photographs and a small selection of objects from which we can discover more about their lives.

One of those objects is the service pistol of Jamaican veteran John Simmonds, which he brandished on the deck of HMS Conqueror at Trafalgar. Conqueror was the vessel which took the French surrender and Simmonds’ descendants still live in the UK and lent the iconic family heirloom to the exhibition.

But as well as providing us with the biographies of Black men who were there at the most iconic moments of British history, the exhibition also reminds of the surprising role the Royal Navy played in Black radicalism.

“It is the ultimate paradox really,” says Martin, “at a time when Britain was the largest trafficker of human lives on the planet – it was the Royal Navy that was the largest employer of Black labour, and it was on a Royal Naval vessel that Black workers could find – for want of a better phrase – some sort of career trajectory and also become politicised.”

Out of this milieu came the first generation of Black writers in English, men like Briton Hammon who was also at the seaman’s hospital in 1759 and was the author of the first slave narrative; Olaudah Equiano; Robert Wedderburn and William Davidson  – a whole generation of fascinating writers and radicals who had that common experience of having been to sea with the Royal Navy, which was the catalyst that made them engage politically with their situation. 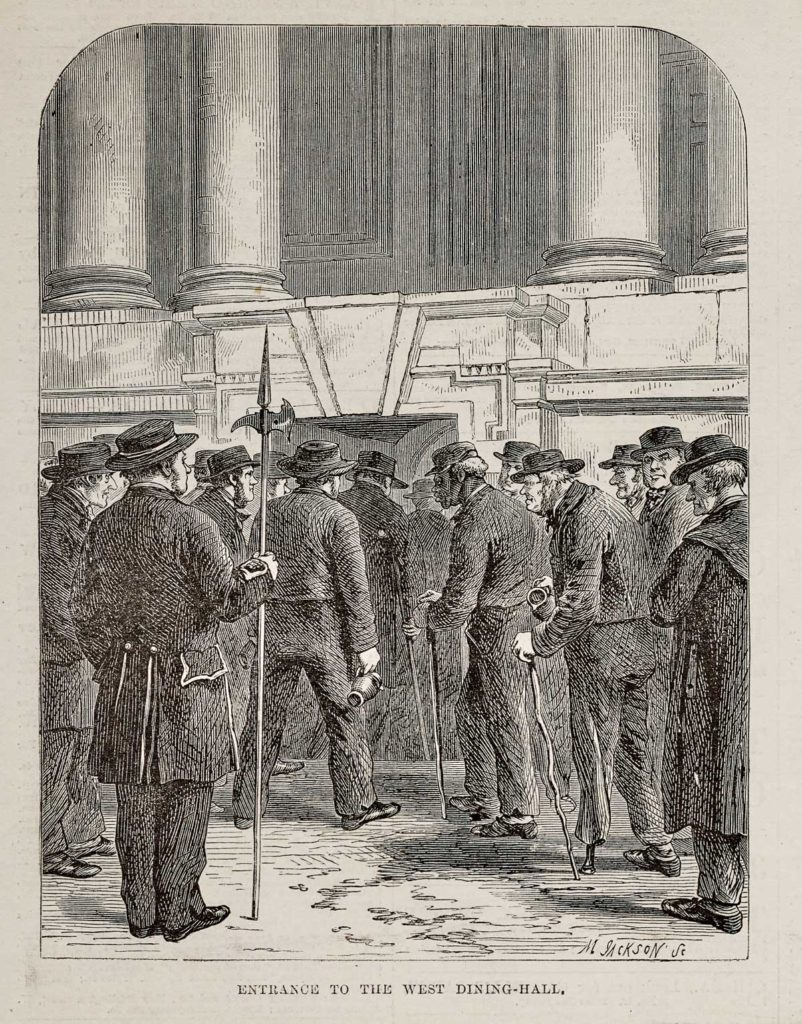 Entrance to the West Ding Hall at the Greenwich Hospital from the Illustrated London News in 1865. 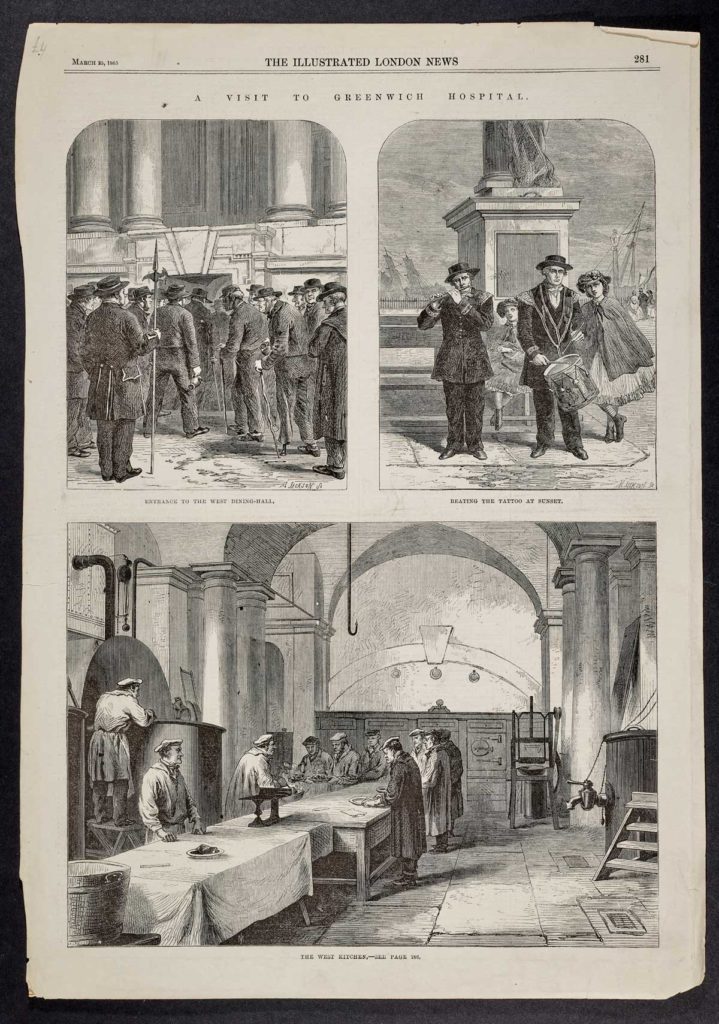 A visit to the Greenwich Hospital. Illustrated London News, March 1865.

“The radicalism is really interesting – what you see is that the Black seaman from many parts of the African diaspora suddenly find themselves living among people who have a background of living amongst Europeans as a mess mate or as a member of a gun crew, and that experience of having that immediate visceral contact with Europeans would inevitably prompt some questioning of the racial dynamics on land.

“On top of this you get the experience of contact and connection with other communities with African origin around the Atlantic as well as communication with fellow Black seamen.”

For their part in this surprising part of British history, the Navy’s attitude to Black personnel was, says Martin, “extremely pragmatic”. Throughout the eighteenth and early nineteenth centuries Britain was at war with France and/or Spain and, as its Atlantic Empire and possessions were expanding, then workforces were inevitably drawn from those parts of the world.

“The earliest orders go out in the 1730s regarding the recruitment of Black personnel, and given the super abundance of Black labour in the Atlantic world it was inevitable that Black sailors would enter the service,” he adds.

“Throughout the period you see increasing numbers aboard naval vessels at all ranks – from landman, the lowest ranks, to bizarrely John Perkins who was a captain of a frigate. It’s a very interesting and thought-provoking story.”

To pull together the exhibition charting these remarkable lives and histories Martin delved into all kinds of historical records such as parish registers of births, marriages and deaths, which he says, “usually carry a racial epithet, which lets you know exactly who is who” together with institutional accounts and admission records which also often carried a description.

Then there’s also the remarkable collection of portraits, which up until the age of photography, also offer “a solid visual reference” of who is who. Sketches as well caricatures from the period show a very high frequency of recording the Black presence. 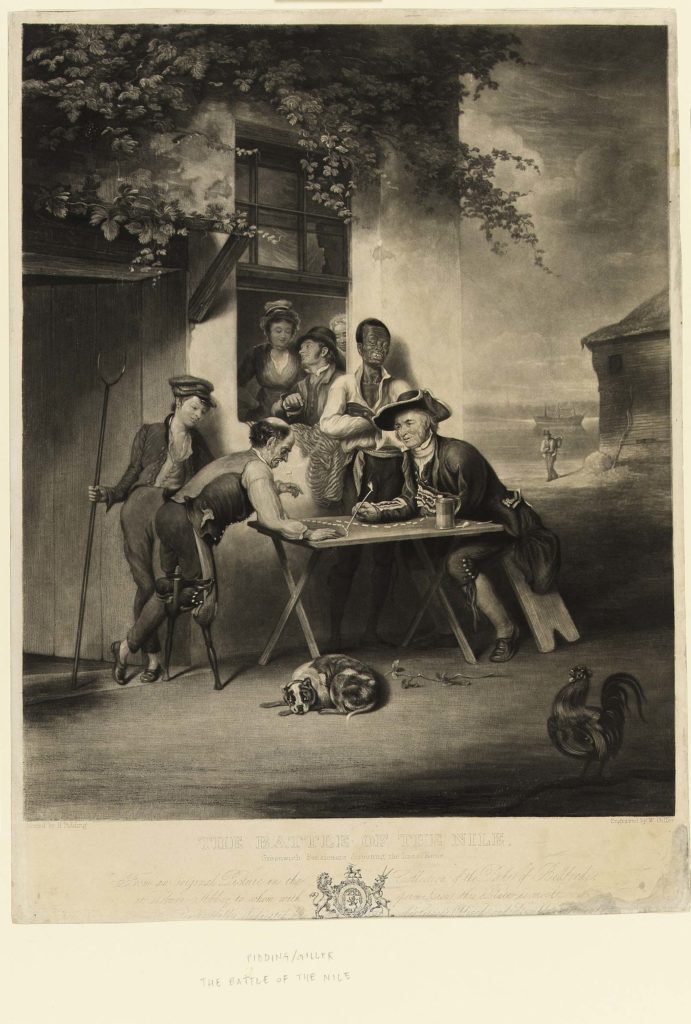 The Battle of the Nile, Greenwich Pensioners disputing the line of battle; mezzotint based on an original oil painting of 1827

“What for me is really fascinating in these representations is the lack of overt and typical caricature of the Black pensioner,” says Martin, “and they do seem to blend in to the background, leaning against the door of a pub or playing a game with a crippled colleague – all sorts of things which I think is interesting and unusual in representations of Black people at that time.

And what better encapsulation of these considerations than a character like John Simmonds? The mixed Jamaican sailor in Nelson’s Navy ended his service as a quartermaster. The painting of him, which has been passed down through has family, shows him standing in Mansfield Market in Nottinghamshire, wearing his Trafalgar medal.

“So you also have the other remnants of his presence, which are his descendants – Ruth Crook and her family which are the living, conscious remnants,” adds Martin.

“These seamen did not vanish from history; they are in many, very real ways still with us. Not just their writings, not just their impact on politics and art. This is not a theoretical thing that were trying to introduce into the narrative.”

Black Greenwich Pensioners is in the Mezzanine Gallery of the Old Royal Naval College Visitor Centre, Saturday October 3 2020  until March 2021.

Welcome to the Old Royal Naval College (ORNC), Sir Christopher Wren’s twin-domed riverside masterpiece and one of London’s most famous landmarks. The ORNC is open daily and is a breathtaking place to visit – whether you have an hour or a day. The iconic buildings stand on the site of…