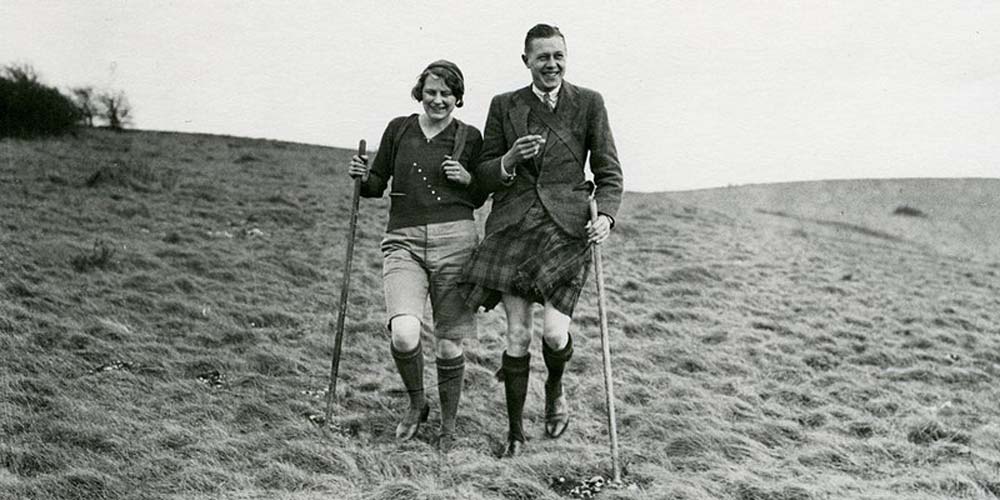 The team at West Sussex Record Office (WSRO) have been delving into the history of the South Downs National Park as part of West Sussex Unwrapped, an exploratory online multi-media project in partnership with Screen Archive South East (SASE).

On Sussex Day (16th June) the latest edition of West Sussex Unwrapped will be published on the WSRO blog. This special edition will explore the South Downs through photographs, documents, and artworks from the archives, leading you through the many aspects of this magnificent National Park. It will be accompanied by a compilation of historic film footage from the SASE archives.

Coinciding with this will be the West Sussex Unwrapped Live event taking place online and coming into your homes straight from the archive, where our archivists will talk more about the South Downs through archival documents and film footage.

‘Before and after’ views of the grounds at Uppark by Humphry Repton, Uppark 868. Images courtesy of West Sussex Record Office.

West Sussex Record Office holds the archive of the Uppark estate, which includes a wonderful illustrated volume of the estate grounds. This volume – one of the famous Repton Red Books – was created by the leading landscape designer of the 18th century, Humphry Repton who pioneered the use of flaps to show ‘before and after views’ to his clients. The books take their name from their red Morocco bindings.

He was commissioned in 1810 by Sir Harry Fetherstonhaugh, the owner of Uppark, to design a new layout of the estate. The images above depict just one of many original and proposed views of the grounds, as imagined by Repton. This particular view looks out over Uppark’s cattle and deer, and the hills of the South Downs.

It is clear from Repton’s vision for the estate that he desired to make the very most of the beautiful surroundings. As you can see from the second illustration, he proposed stripping a tree of its middle branches, which were interrupting the view and suggested an extensive balustrade, rather like an enormous picture frame, from which to view the South Downs.

Trekking across the South Downs

Many of the paths and tracks which now make up the South Downs Way have their origins in routes walked since the Mesolithic period. The archives are full of evidence of trekking across the National Park, especially for leisure. Here we’ve selected a couple of items from the archive which illustrate this pastime. The first is a wonderful photograph of two walkers taken in 1933 by George Garland of Petworth. Aside from the woollen kilt, these two wouldn’t be amiss on the Downs today.

The second item is a hand drawn map of ‘Uncontrolled Trekkers Feeding Centres’, made in 1942. The map depicts various unsanctioned places (including the Convent of the Blessed Sacrament in Upper Beeding) where a weary and hungry trekker could get something to eat. The map is a testament to the popularity of walking over the South Downs.

Residents of the South Downs have long had the best interests of the park in mind. The archive holds several campaigning leaflets which attest to the community’s interest in conserving the landscape. The two examples we have here are from the West Sussex County Council archive. The first, concerning The Pylon Protest, was published in the 1970s and aimed to drum up awareness of the erection of high-power pylons in the Downs.

The second, about Hurstpierpoint, was published in the 1980s and aimed to unify the community of Hurstpierpoint through a shared love for their village; albeit, this also entailed contesting projects or other factors that may have encroached on the village’s conservation status.

The South Downs film by Screen Archive South East will be available on their Facebook and Twitter pages .