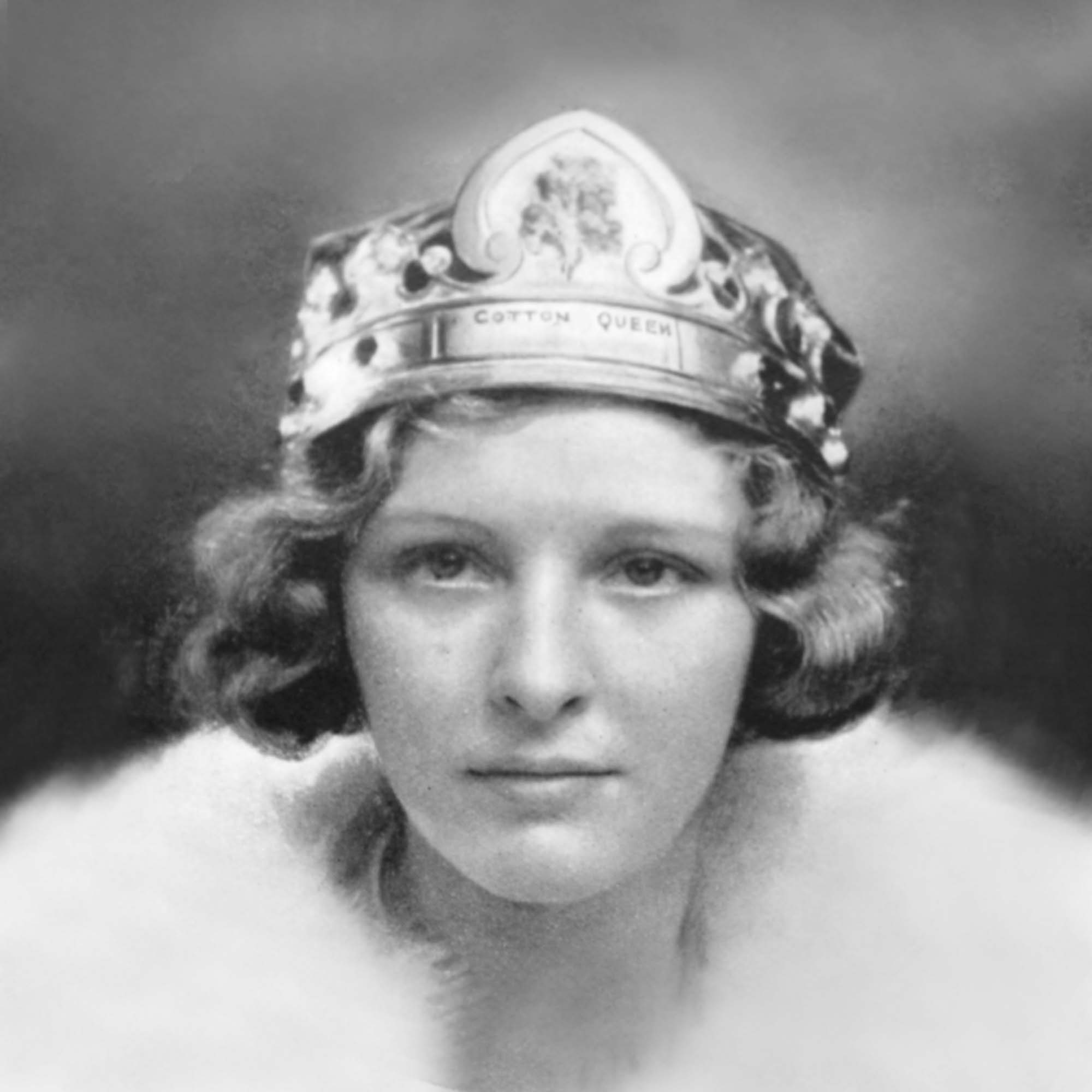 Leeds Industrial Museum at Armley Mills is celebrating the untold histories of the working class women elected to represent some of Britain’s greatest industries, from coal to cotton, from the 1920s to the 1980s

In the turbulent history of twentieth century British industry and the long but steady decline of coal, steel, engineering and textile manufacturing, there is one social history that remains strangely neglected: the story of the industry queens.

Elected to represent mills, factories mines and railways the industry queens were a 20th century phenomenon that grew out of a desire to give the workers something to celebrate – and distract them from the hardships of early twentieth century working life.

Based on the May queens of village fetes and fairs, the first Railway Queens were elected in the 1920s and the last Coal Queen in the early 1980s – a period which saw scores of girls aged between 14 and 17 plucked from the factory or mill floor or from the families of railway or mine workers to become ambassadors, feted celebrities and in some rare cases stars of stage and screen.

But according to John McGoldrick, Curator of Industrial History at Leeds Industrial Museum whose exhibition Cotton Queens explores this little known phenomenon, for the girls who were crowned it was exceptionally hard work. 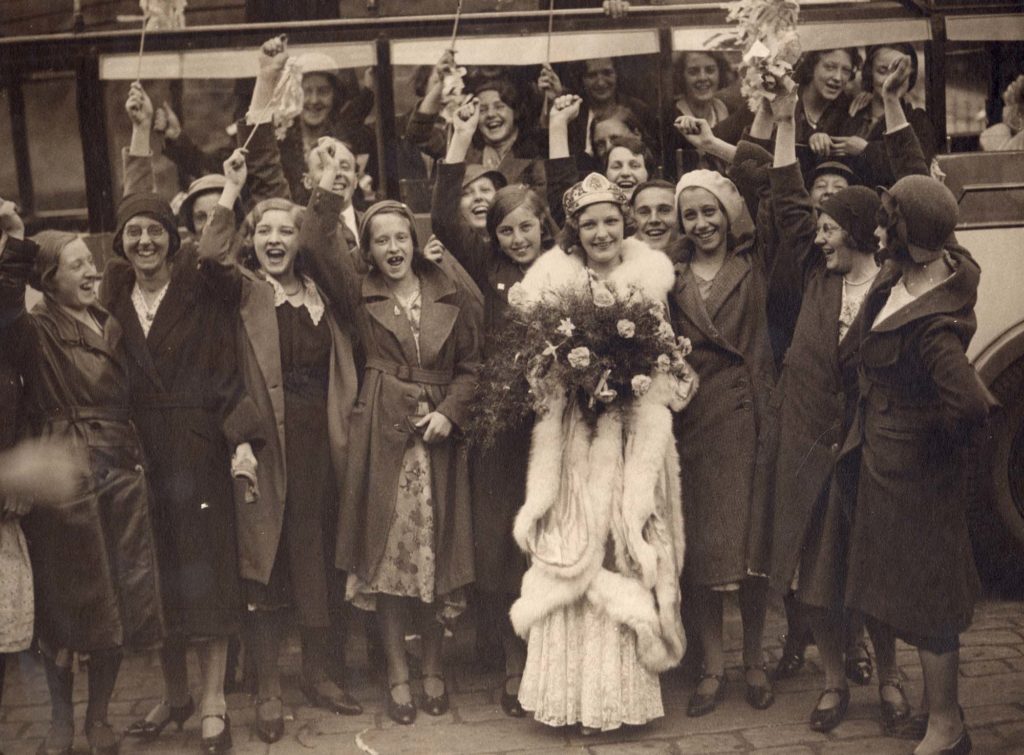 Workmates from Sharples’ Warehouses & Co. Ltd cheering the Cotton Queen when she arrived at Brierfield during the tour of the North East Lancashire textile towns – July 7th 1932. 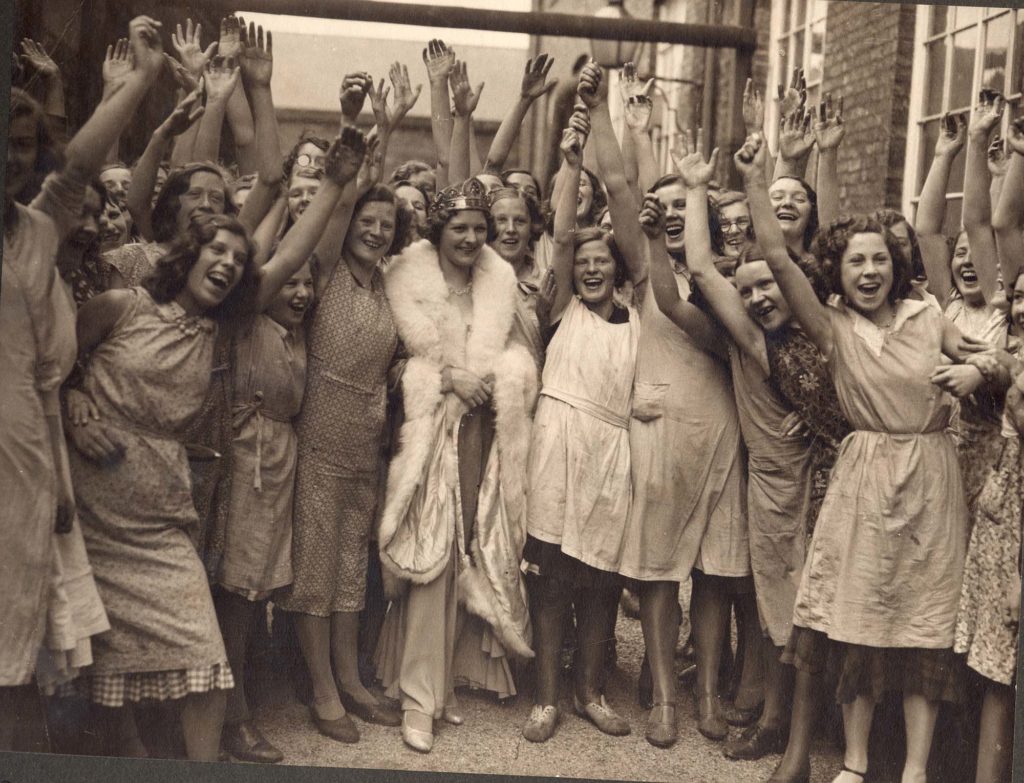 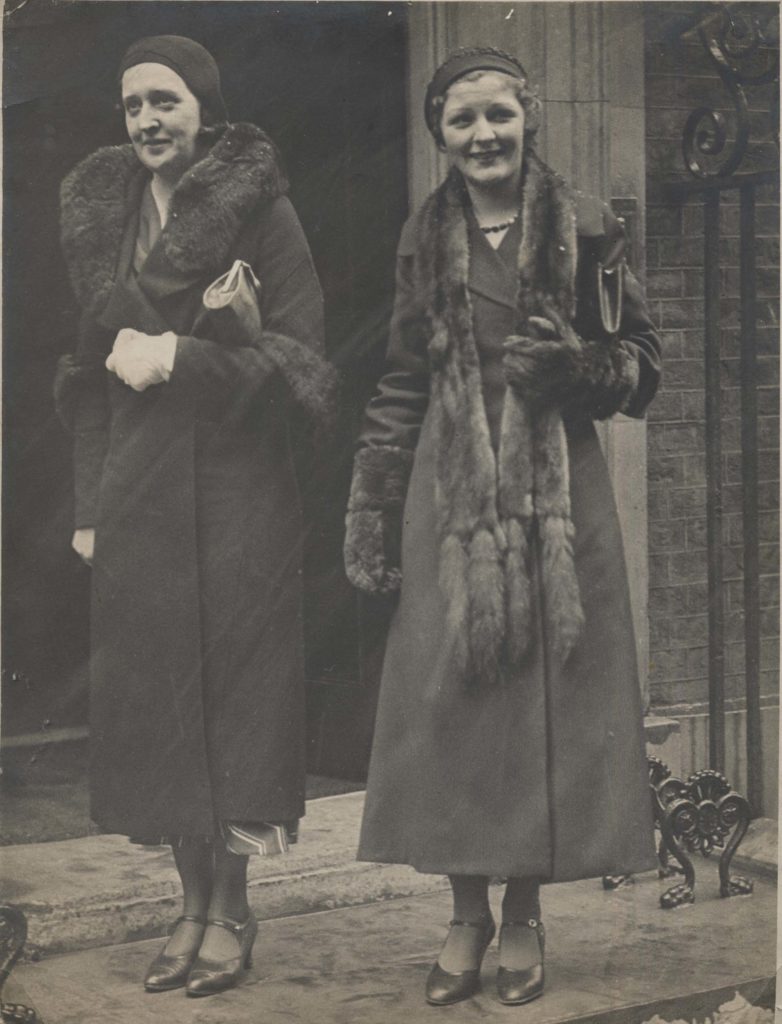 “Some of the Cotton Queens had a full schedule,” he says, “you could do upwards of 150 engagements in a year so they were certainly made to earn their corn.

“It could be the Cotton Trade Fair in London, small events like local and village galas, the opening of a municipal baths. There was one railway queen, Janet Taylor, who gave eight speeches over a weekend at Wolverton Locomotive Works.”

McGoldrcik says the industry queens began with the railways – often plucked from the families of railway men – and then in the 1930s it was embraced by the textile industry.

“With the crash in cotton exports and the massive rise in unemployment the Daily Despatch newspaper decided to launch a campaign called the ‘Cotton Queen Quest’ through its pages. The idea was for young women who worked in the cotton industry and on the shop floor to photograph themselves and send it in.” 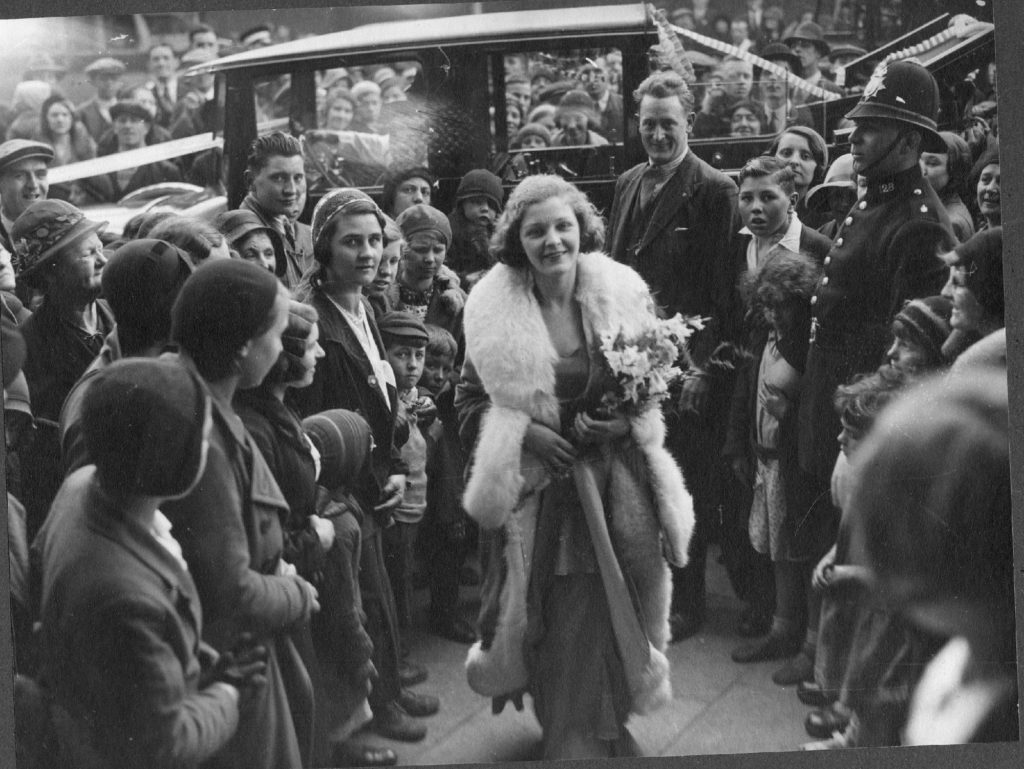 Marjorie Knowles at the Burslem Hospital Carnival, May 1933. Her boss John Sharples (dressed in suit & tie) looks on. 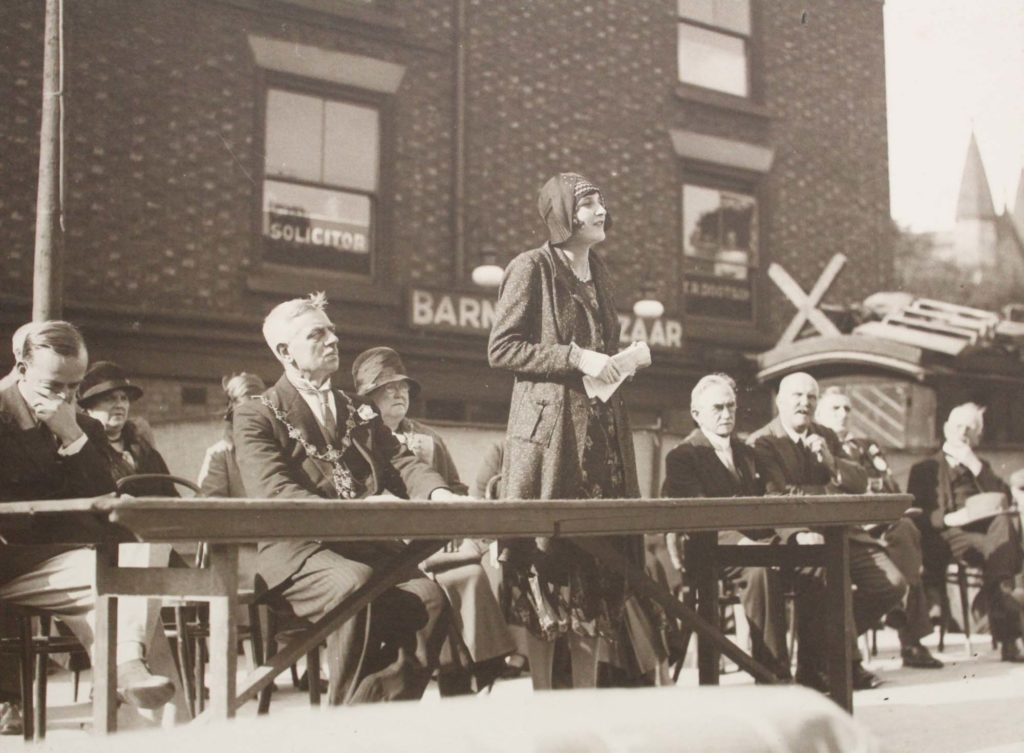 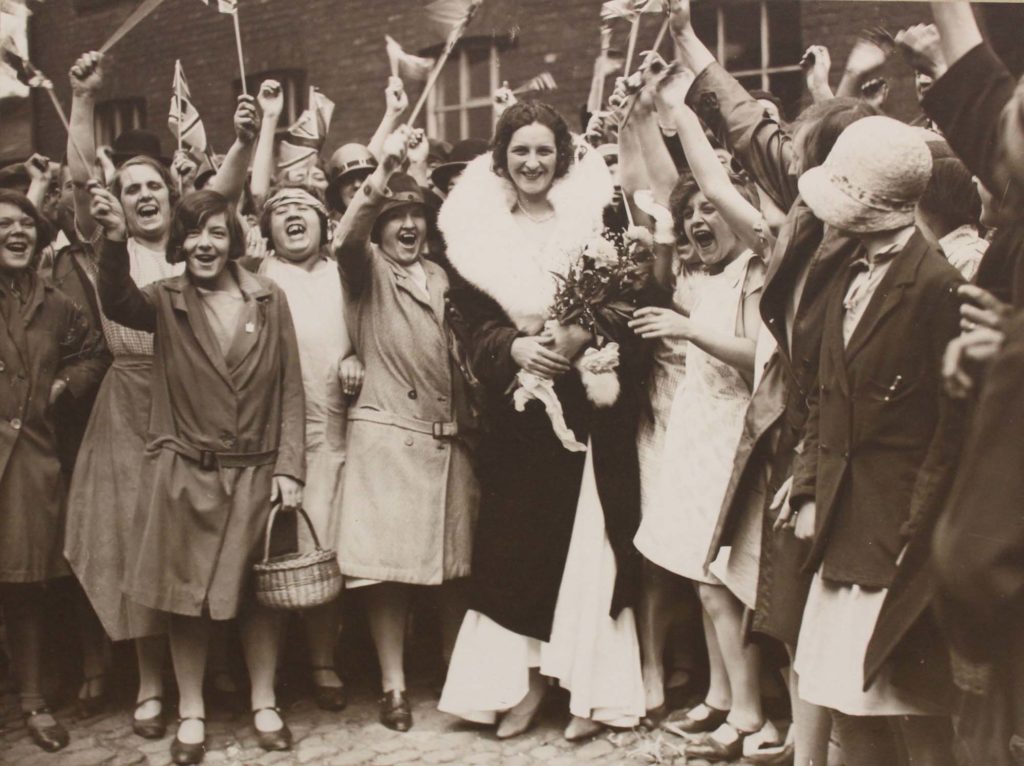 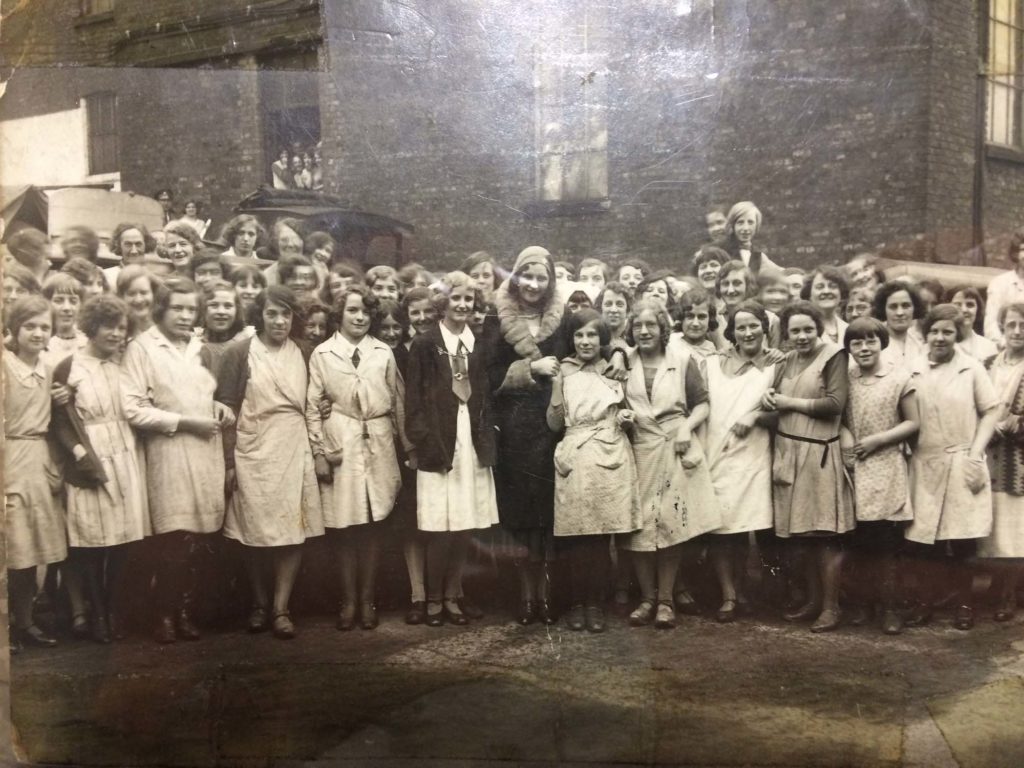 Usually the most conventionally attractive women were selected to compete in the various rounds before entering the national final in Blackpool, but says, McGoldrick, “it wasn’t just appearances”.

“It was about how much you knew about your industry, so some of the Queens had to be given a taste of different departments in the mill so they could actually talk with authority about how some of the products were made.

“The mill manager of Marjorie Knowles knew she was going to be put forward so he sent her round all the different departments so she could talk about how these products were made.

“It was a very clever and very astute bit of marketing. And this was all in the context of the explosion of cinema and newspaper printing which made it possible for a mass audience to see these women through better quality photographs or Pathe News in the cinema.”

“She was from a terraced house in Burnley”

Several of the women who came through this gruelling process are featured in the exhibition, including Marjorie Knowles, who during a busy year banging the drum for cotton manufacturing as Cotton Queen of 1932, met the Prime Minister Ramsey MacDonald.

“She was by all accounts quite a theatrical individual,” says McGoldrick. “She married a university lecturer and migrated to the United States. She was from a terraced house in Burnley, which still stands today.” 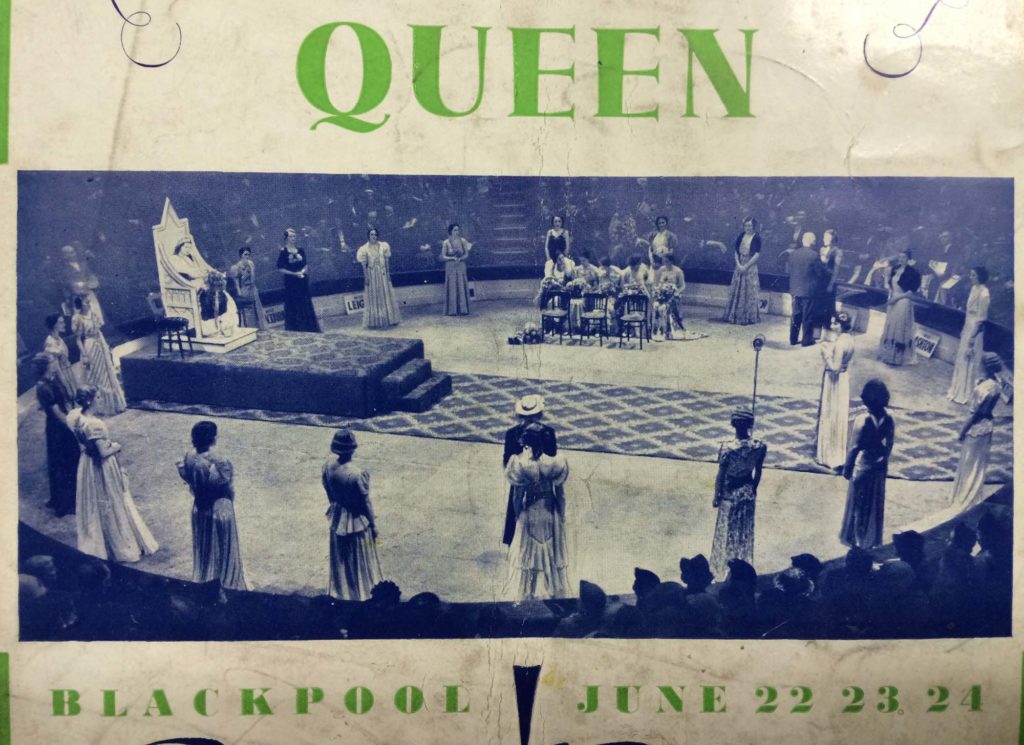 There is also the tale of the Railway Queen Audrey Mosson who was packed off in 1936 on a goodwill mission to Russia where she had to endure the company of Stalin’s right hand man, Kaganovich, the Minister of Transport, who was at the time overseeing the Stalinist purges and putting his signature on the death warrants of thousands of people. She also had the honour of switching on the Blackpool Illuminations, a privilege usually restricted to the very famous, wealthy or powerful. The Cotton Queens even had a waltz composed in their honour.

“It was a product of its time, very patriarchal”

The first Cotton Queen, Marjorie Lockett, rose to the position after her father sent her photograph into the Daily Despatch.

“She later recalled how her little brother ran up the stairs and shouted, “Your photo’s in the paper!”” says McGoldrick. “There’s definitely an element of women not having as much independence, freedom or control of their lives as they do now. It was a product of its time, very patriarchal – the managers in all those industries were overwhelmingly male.”

But as the exhibition weaves through the personal stories of Lancashire and Yorkshire lasses made good there is, says McGoldrick, “a real sense of lives being transformed”. 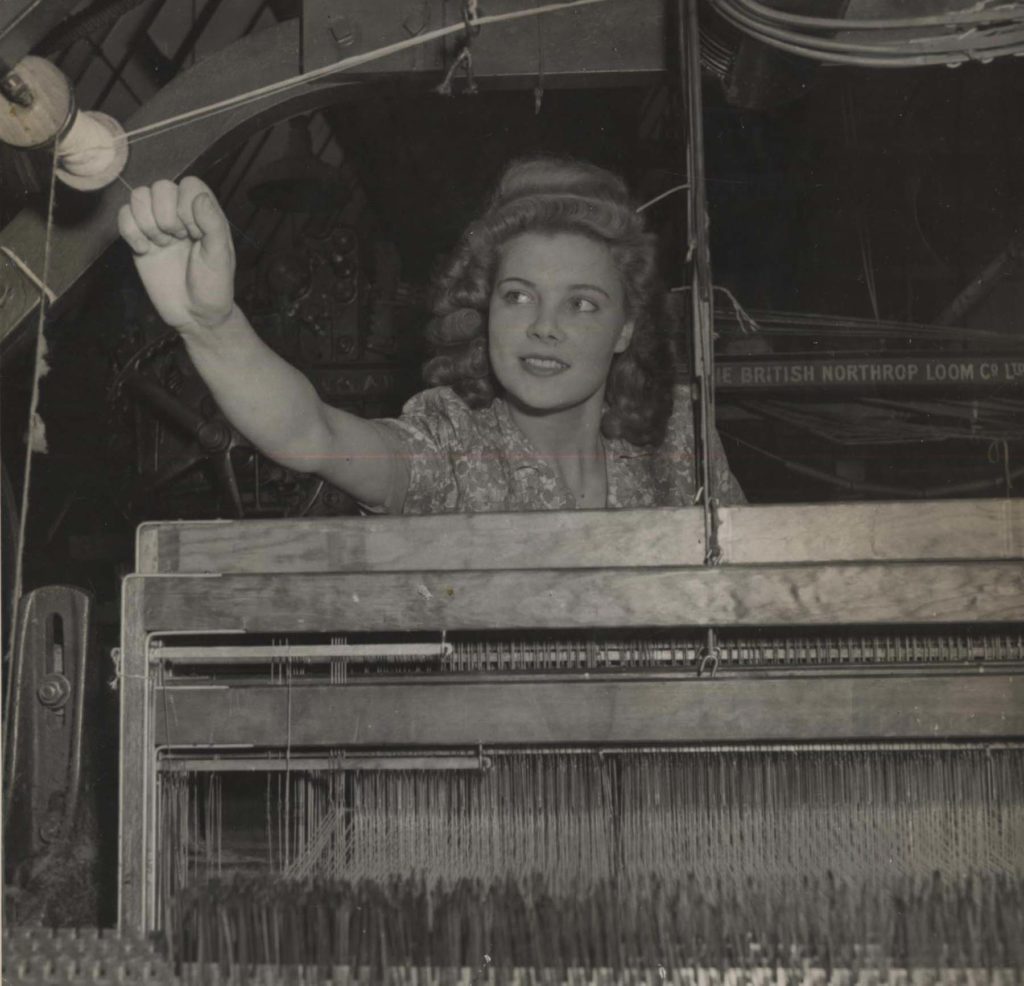 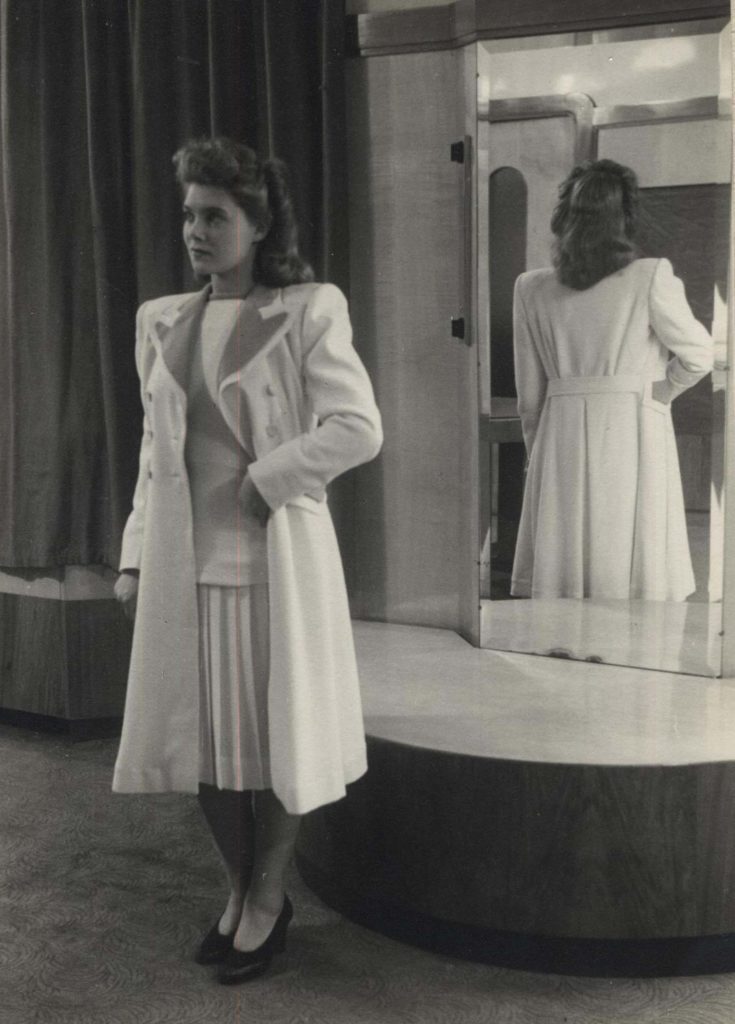 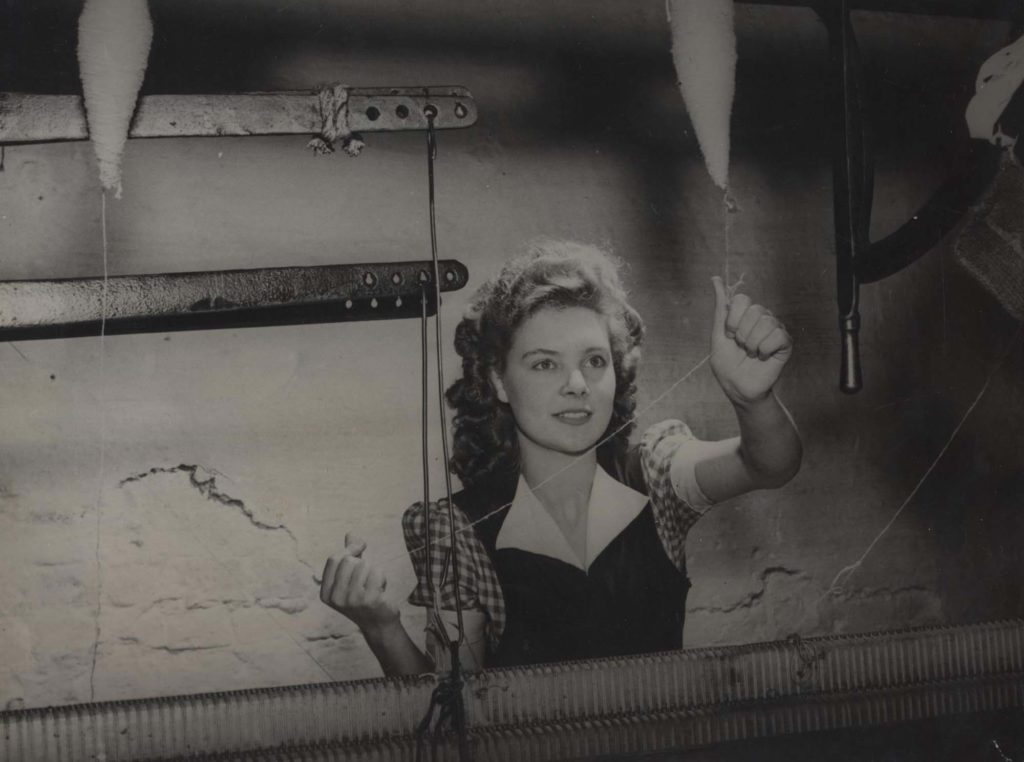 “Some of the queens claimed that it helped them jump a class and opened up opportunities for them. Many of them were exceptional women with talents for design or singing or acting and the queen role allowed them to basically fulfill their potential.”

One of the latter was Doreen Kerfoot, a wool weaver from Batley whose family had been burnt out of their house during the Second World War. Selected to represent the wool industry in 1948, she went on to play the lead in a film called The Three Piece Suit, which was created as part of a wool industry recruitment drive aimed at young female workers.

In the film, Doreen is a weaver on the factory floor who designs a new three piece white suit – a symbol of the future and an antidote to post-war austerity.

Now in her nineties Doreen has donated material for the exhibition including a script and stills from the film, which boasted feature film production values but used real workers playing themselves. Sadly all copies of The Three Piece Suit have seemingly disappeared but McGoldrick and his colleagues have set themselves the challenge of finding it. “Someone out there might just have a copy,” he says. “It would be a dream come true if we could find it.” 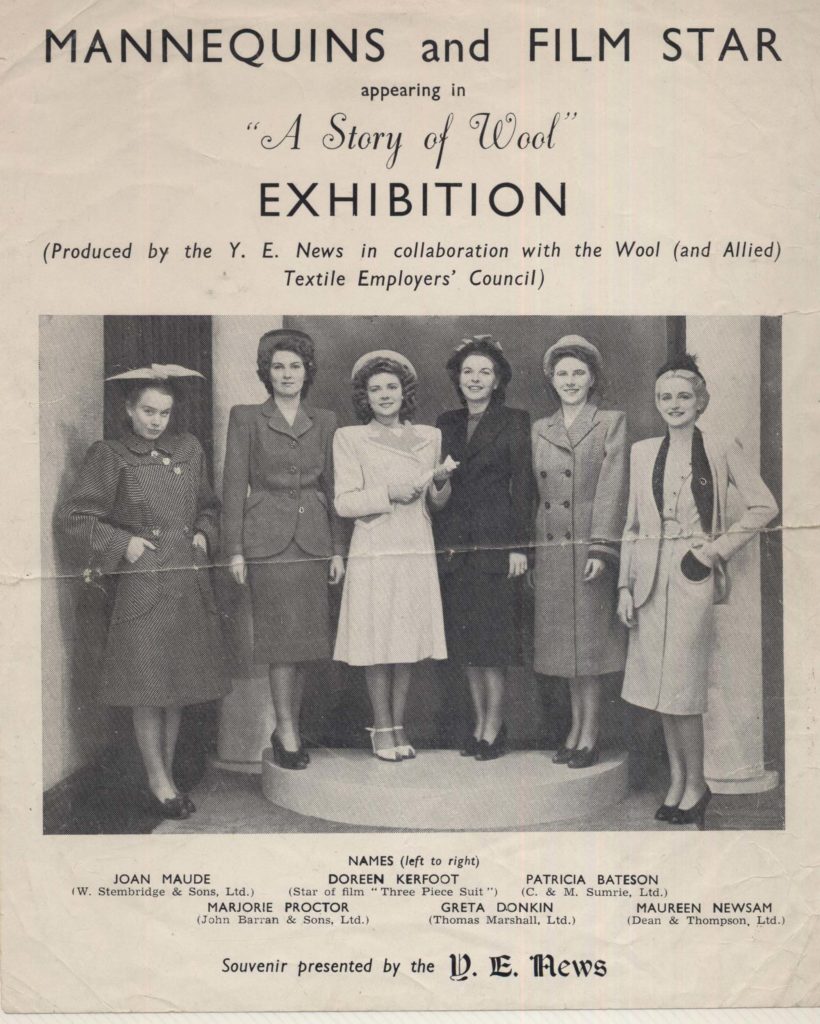 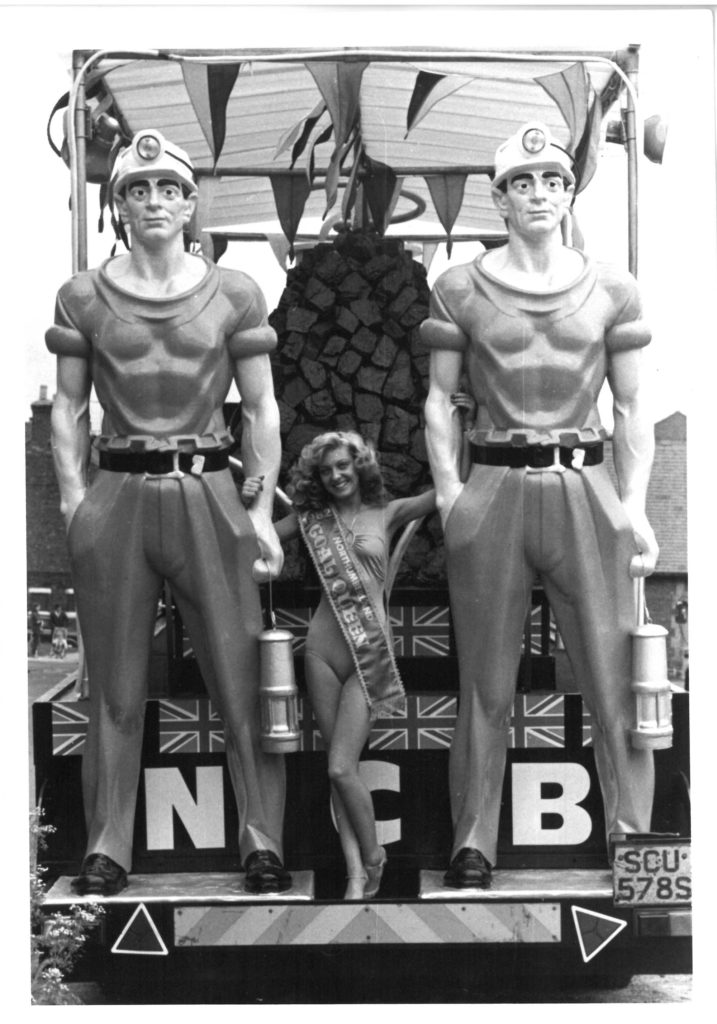 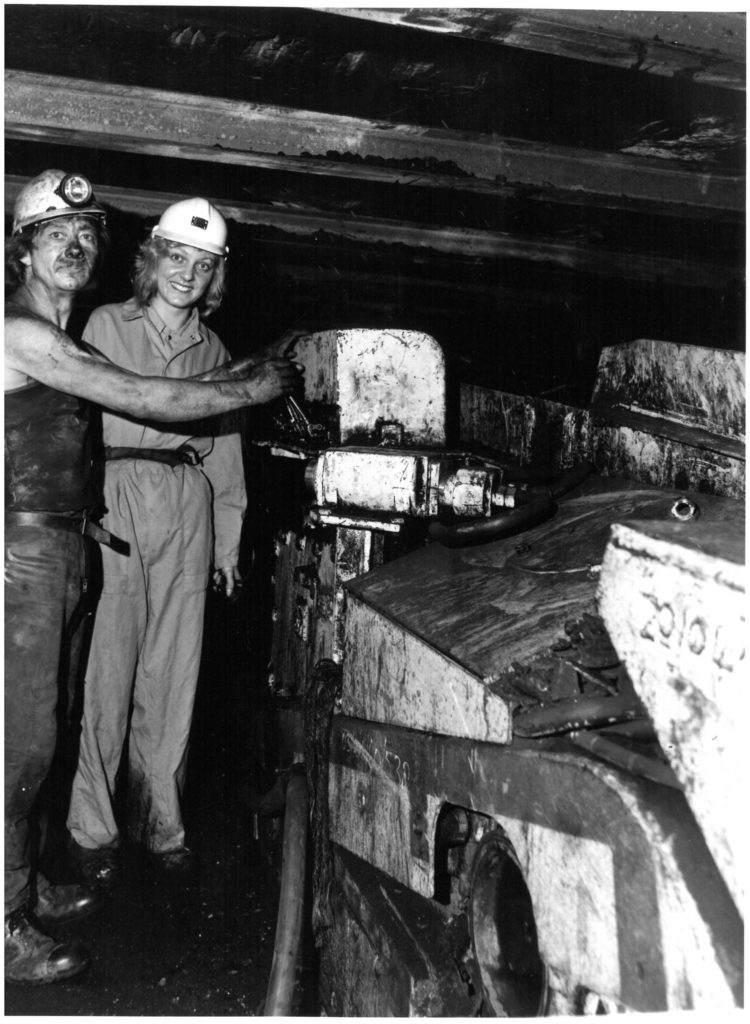 Another former industry queen lending objects to the exhibition is one of the very last. Deborah Bramley was Northumberland Coal Queen in 1983 and has loaned her tiara and sash for the exhibition. From several generations of miners, “There’s coal dust in her veins, not blood,” says McGoldrick, Deborah is now Marketing Manager at Woodhorn Mining Museum.

“Obviously in the 1970s and 1980s it was that kind of swimsuit stuff,” concedes McGoldrick, “but Deborah remembers having a great experience and just being proud to represent the community.

“That reflects the sense of community pride that they all felt at the time. They weren’t just in it for themselves, they were in it for their families, their fellow workers and where they came from. It’s especially strong with the Coal Queens, they were so proud of representing their area and their workforce.” 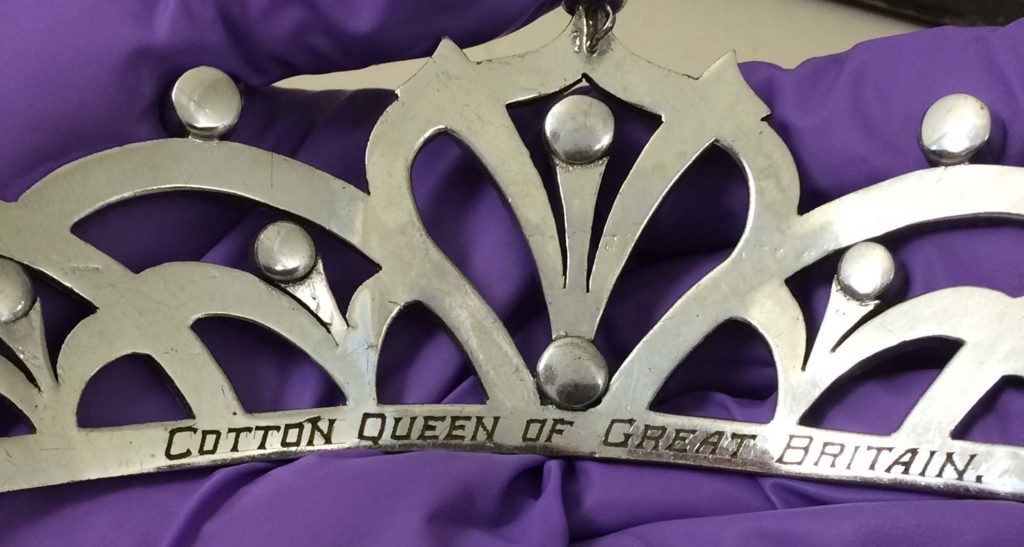 A key aim for the exhibition is also to explore how women today experience working in industry and to record contemporary female industrial history. “Industrial museums haven’t always been great at embracing women in industry,” says McGoldrick, “so we also feature three women in modern industry, one’s a train driver for Virgin Trains and one has got her own woolen business, so we’re looking to bring it up to date and making links between the past and present.”

Queens of Industry is at Leeds Industrial Museum from November 3 2017 until September 2019.

Formerly the largest woollen mill in the world, Armley Mills is now a museum which explores Leeds' rich industrial past. Displays cover the local textiles and clothing industries, printing, cinematography, photography and engineering. Working exhibits include a 1904 spinning mule and 1920s-style cinema. This museum has a Designated Collection of…

4 comments on “Cotton Queens – remembering the forgotten queens of industry”