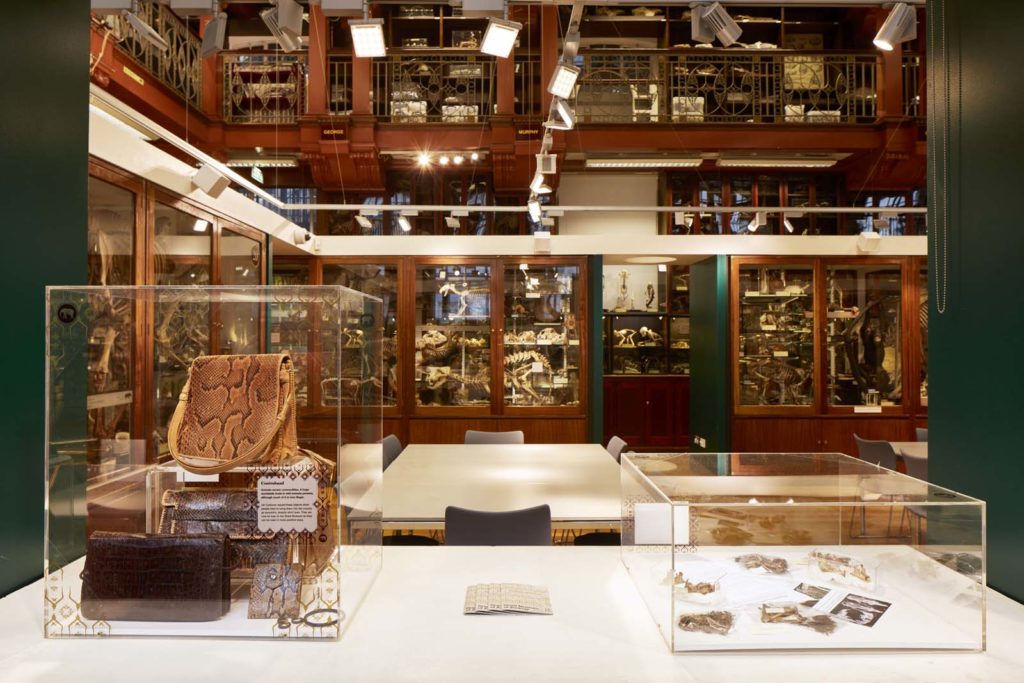 Displays of Power at the Grant Museum. © Matt Clayton

There are many difficult stories and truths confronting the visitor to the Grant Museum’s latest exhibition, as it grapples with its own collection, origins and the nature of natural history museums right across the UK.

London’s last surviving university natural history museum remains the most popular of University College London’s museums, and in recent years it has gained a reputation as an outwardly progressive institution, with well-publicized moves to improve ethics around taxidermy and a wonderful display of its microscope slide collection via the innovative and artful micrarium.

But the very foundations of the collection are put under the microscope in this important exhibition, which as well as looking inward, should have far reaching ramifications beyond the museum’s walls.

Displays of Power: A Natural History of Empire connects the museum’s specimens to a wider history of science and Empire by asking one simple question: “How did all these things come to be here in the first place?” 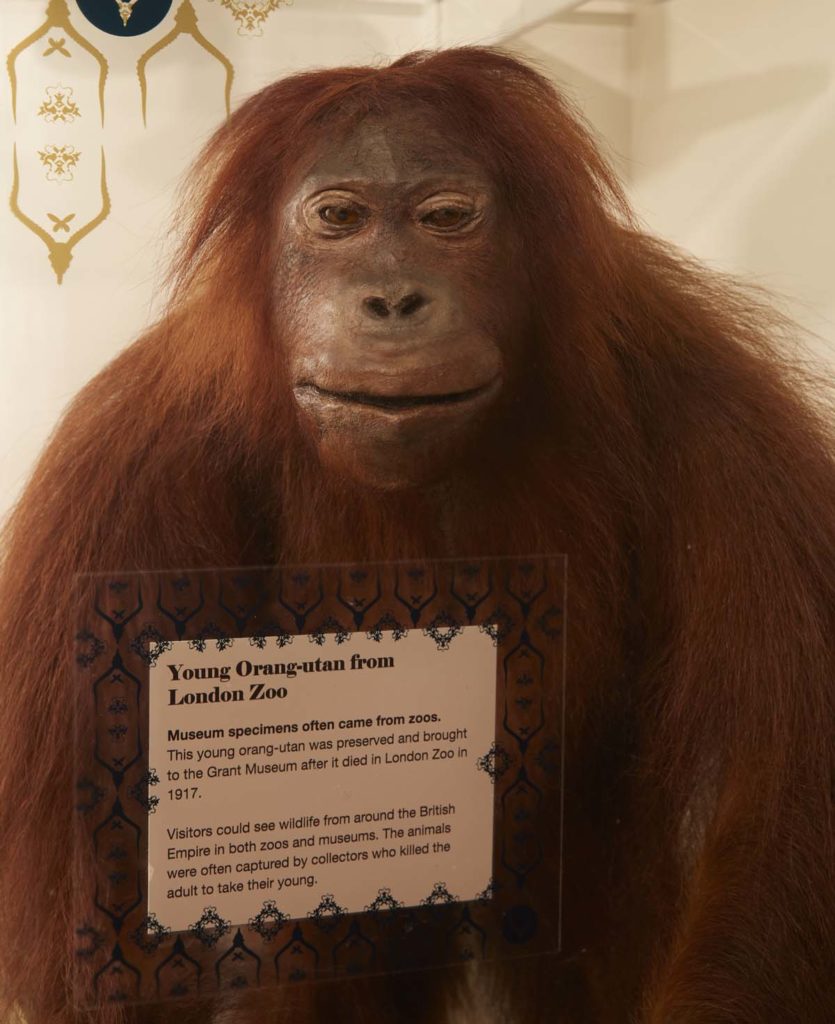 An orangutan that died in London Zoo in 1917. © Matt Clayton 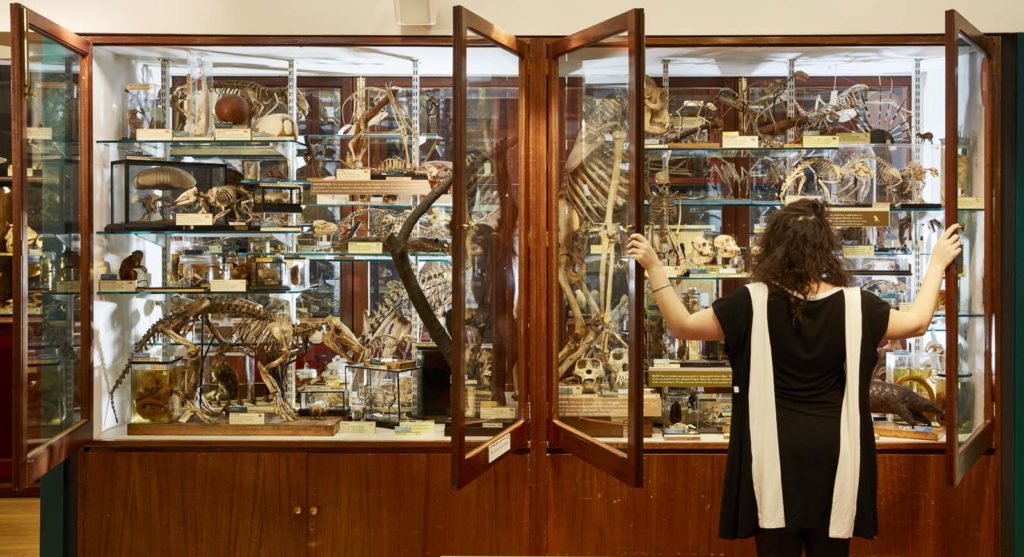 It’s an uncomfortable question to pose, but one which reveals how the Grant’s collection extends into the dark recesses of our colonial past – from the conquest of empire to the scientific racism that fed it.

“We wanted people who come regularly to realise that histories of empire and colonialism run through every natural history collection – and every museum collection,” says the exhibition’s co-curator, Subhadra Das, who together with colleagues has selected some hard-hitting examples of colonial collecting and suspect science.

“In my mother tongue the word for museum is translated as ‘magic room’” she adds, “people want a sense of wonder and I think this has been the currency of natural history museums in particular. That sense of wonder is amazing, but it’s built upon people’s bodies.”

Some of the objects on display tell stories about conquest and extermination, others remind us how empire shaped the way we think about, collect and display animals and how empire may have ended. But partly thanks to museums like the Grant, these ways of thinking are really still with us today.

Robert Grant was England’s first Professor of Zoology and Comparative Anatomy. He joined the newly formed University College London in 1827 and began teaching there in 1828.

“Nearly 200 tons of ivory was imported through London Docklands warehouses by the 1870s.”

Grant’s specimens, which he used for both teaching and research, came from all over the British Empire and beyond, through the colonial networks and via connections at the Zoological Societies of London and it’s these specimens that fill the museum today.

One of the most manifest examples is the quagga – a subspecies of plains zebra which was hunted to extinction by colonists in South Africa because they wanted the grasslands where it grazed to provide food for their livestock. Laws were finally passed by the government of the Cape Colony to protect it in 1886 – three years after its extinction.

Other skull specimens, like the elephant skull and tusks remind us how London was the hub of the British Empire’s trade in ivory, which was imported, resold and turned into luxuries like piano keys, billiard balls and cutlery handles. Nearly 200 tons of ivory was imported through London Docklands warehouses and sold each year by the time the trade reached its height in the 1870s. 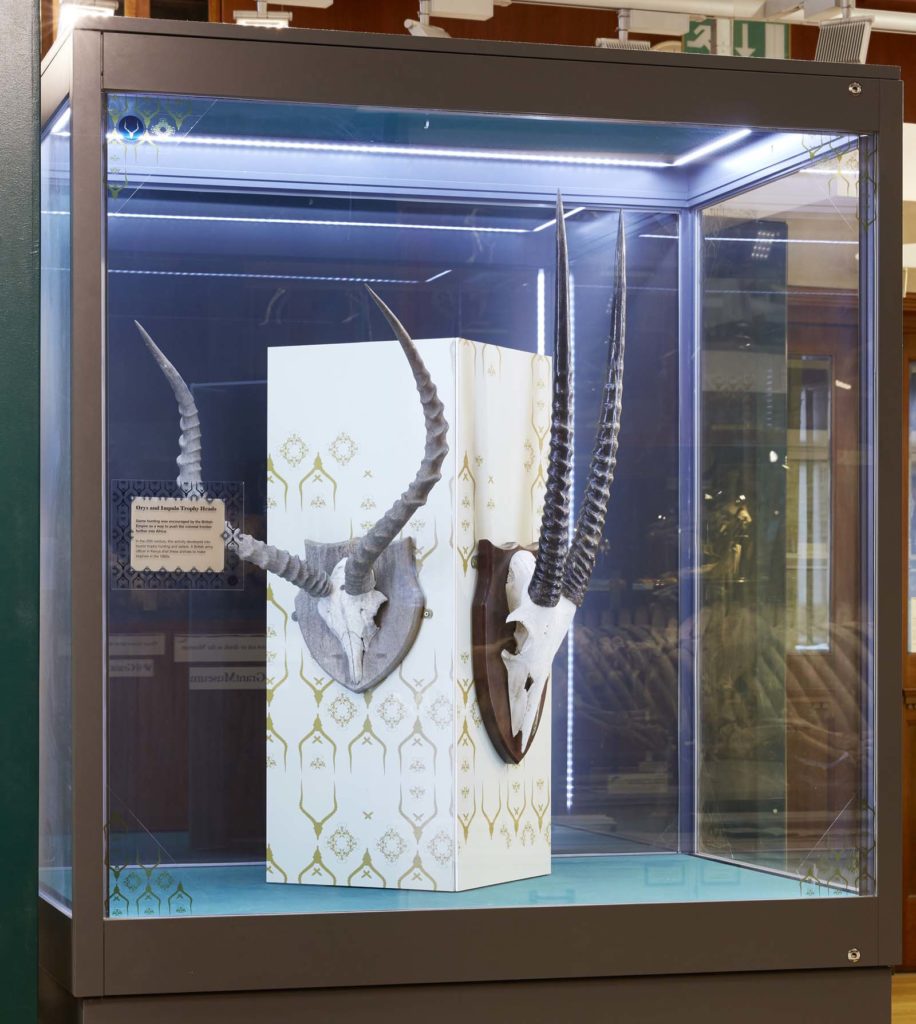 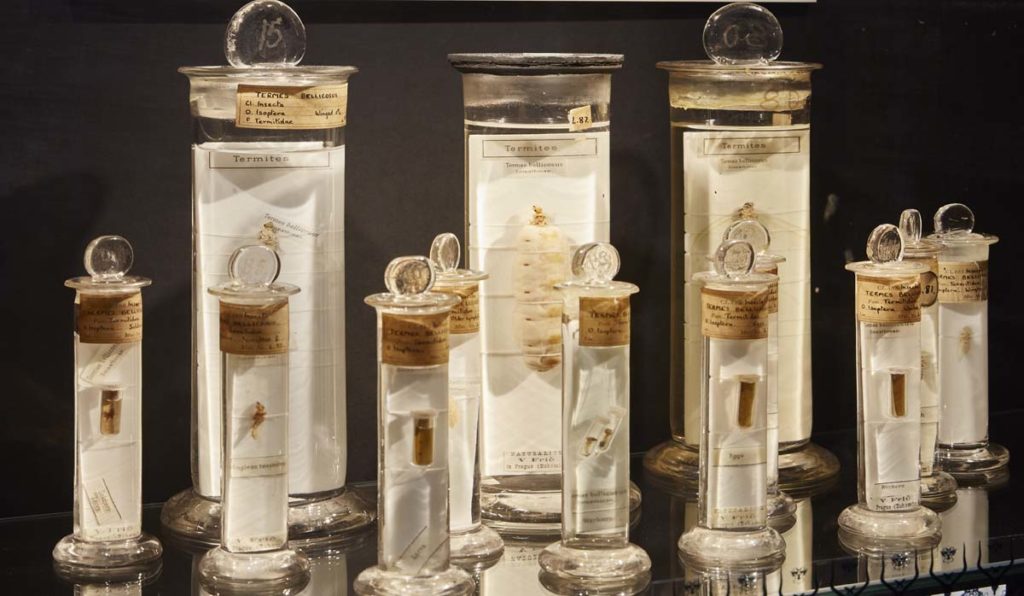 Like many natural history collections, some of the animal specimens arrived as a result of game hunting, which was encouraged by the British Empire as a way to push the colonial frontier further into Africa. In the 20th century, this activity developed into tourist trophy hunting and safaris, and various remains of hippo, kangaroo and tigers testify to this sad practice.

Other species were killed for more distressingly ‘practical’ reasons, as in the case of the thycaline – otherwise known as the Tasmanian tiger – a marsupial that was hunted to extinction (the last one died in a Hobart Zoo in 1936) by British colonists in Tasmania in order to protect livestock.

Yet the sad demise of the last thycaline, which since 1996 has been commemorated in Australia by National Threatened Species Day, accompanies another demise, that of the Tasmanian Aboriginal people who were decimated by violence and disease brought upon them by settlers.

“What I did not know was that local people in Tasmania were hunted by the British in exactly the same way,” says Das. “They had them taken out because they needed their land for the sheep. It was the fact that that story wasn’t being told that was most shocking.”

The concept of ‘race’ is rarely discussed in a natural history museum context today, but Robert Grant’s comparative anatomy course, which compared the structures of human and animal bodies, raises some dark questions. Indigenous Tasmanian people were regarded by some as a missing link in human evolution and as such, inferior to white people.

“The Museum is actually called The Grant Museum of Zoology and Comparative Anatomy and the question then becomes what is comparative anatomy and what were they comparing,” says Das.

“The study of human skulls was one of the fundamental aspects of scientific racism, and if you were studying the natural sciences, the main question they were asking for a couple of hundred years was what does it mean to be human? Are humans a separate species? Are different kinds of people the same human species?

“Those interpretations really worked in the aftermath of the establishment of the triangular trade of the transatlantic trade in enslaved people.” 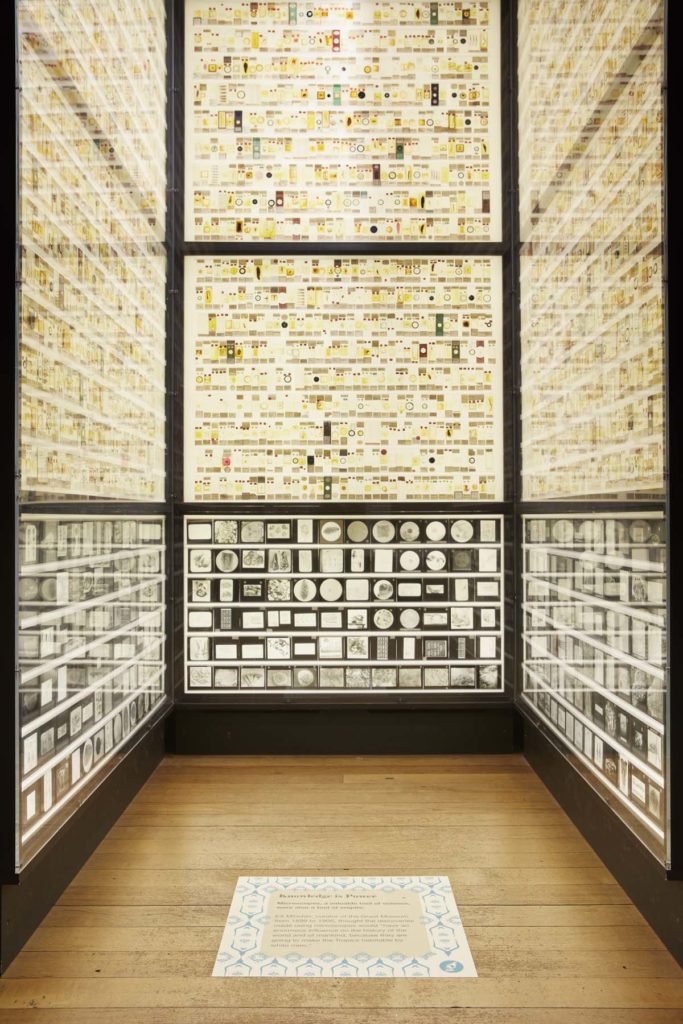 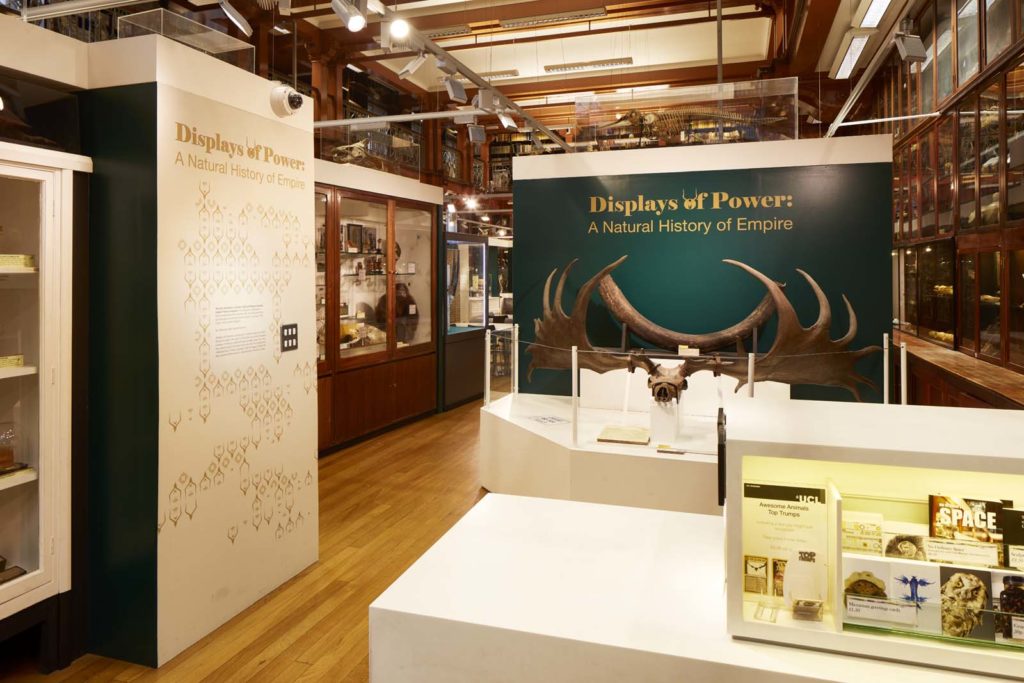 A less traumatic corollary to the stark economics of empire comes via the shipworm, a wood boring mollusc which threatened the ships that were keeping the empire afloat.

“You can’t have an empire without ships,” says Das. “The empire is not just the pink bits on the map, it’s also the blue bits in between and the ships that travel across it to keep it all going.

“The museum is a research centre and a place where people are actively studying the natural world – sometime out of sheer wonder, but sometimes they are studying because of commerce. In this case we studied how the natural world attacked ships.”

And in this laying bare of all aspects of the Grant and its collection, which travels from beavers and rabbits to human skulls and Surinam toads, even the micrarium – the lightbox display of slide specimens – comes under scrutiny. It seems microscopes, a valuable tool of science, were also a tool of empire.

EA Minchin, curator of the Grant Museum from 1899 to 1906, thought the discoveries made using microscopes would “have an enormous influence on the history of the world and of mankind, because they are going to make the Tropics habitable by white men.”

“This is the everyday for us,” says Das of the history behind these collections. “There shouldn’t be anything unusual about talking about this history as it is such an intrinsic part of the history of museums. Museums would have had no purpose without Empire, they were built with that very particular thing in mind.

“I want people to know that the ‘cosiness’ of the natural history museum that they are walking into is actually part of a much wider process. People are invested with narratives that have been engrained by museums for the last 200 years. We have the power to change those narratives.

“But that’s the magic of museums, all the stories are there – they are no less wondrous – it’s just that they are more difficult.”

Displays of Power: A Natural History of Empire is at the Grant Museum of Zoology until June 21 2021. Check below for details of the museum re-opening.

Dating back to 1828, the Museum houses a diverse Natural History collection covering the whole of the animal kingdom. Retaining an air of the avid Victorian collector, the Museum contains cases packed full of skeletons, mounted animals and specimens preserved in fluid.

4 comments on “Displays of Power: The Grant exposes the Natural History of Empire”