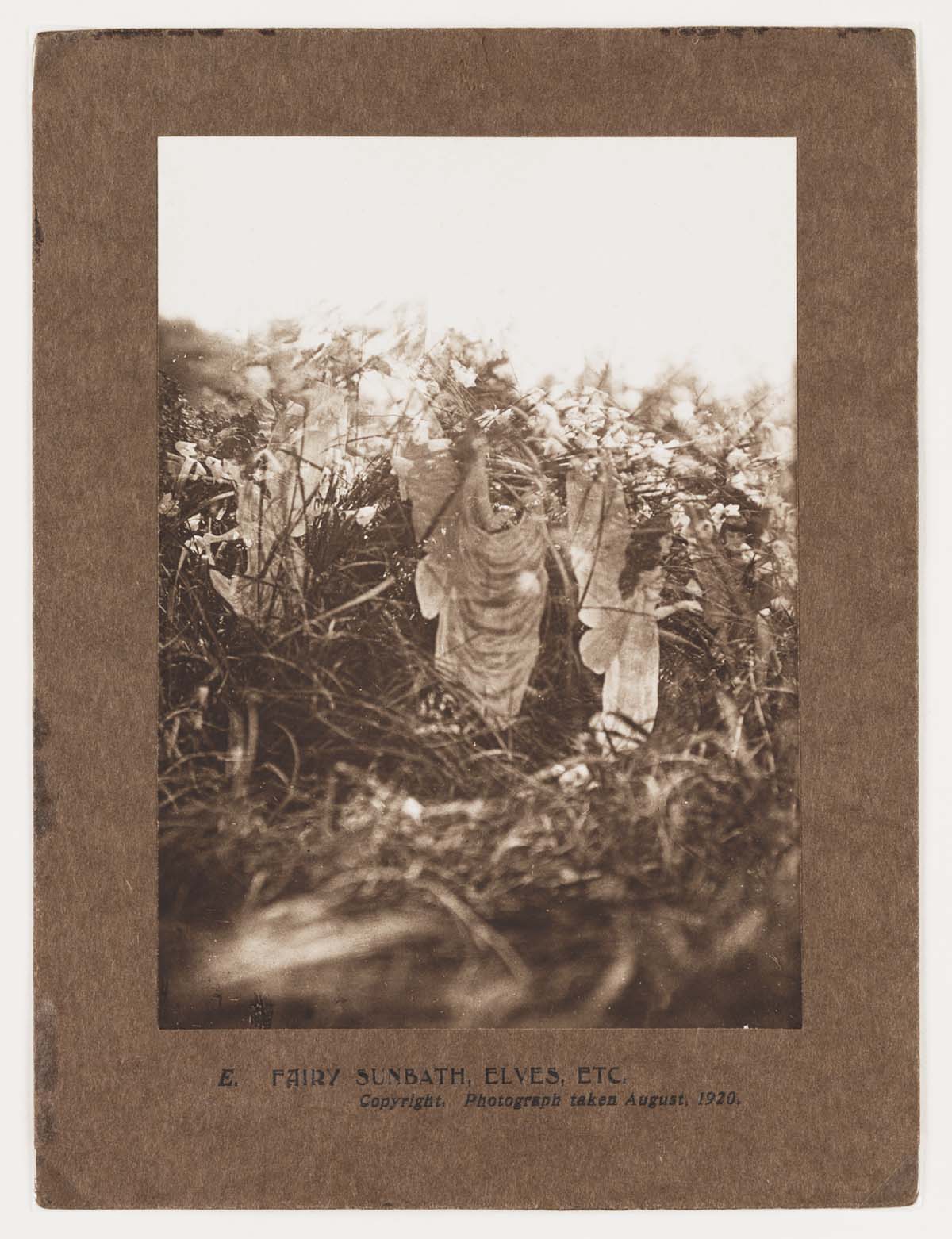 Elsie Wright was 16 and her cousin Frances Griffiths just nine when they took the first Cottingley Fairies photo in their garden in the village of Cottingley near Bradford during the summer of 1917.

The photograph shows Frances with four fairies dancing in front of her and was the first in a series of five that convinced some people, including Sherlock Homes author Sir Arthur Conan Doyle, that a fairy kingdom existed next to a beck at the bottom of a Yorkshire cottage garden.

The fairies were actually drawings by Elsie, inspired by fairy illustrations inside Frances’ copy of ‘Princess Mary’s Gift Book’ (1915). They secured the creations to the ground and on to branches using hatpins and then quickly destroyed the evidence by ripping them up and tossing them into the beck.

Intended to prove to family members that there were fairies at the bottom of the garden, the clever little deception went to a whole lot further. 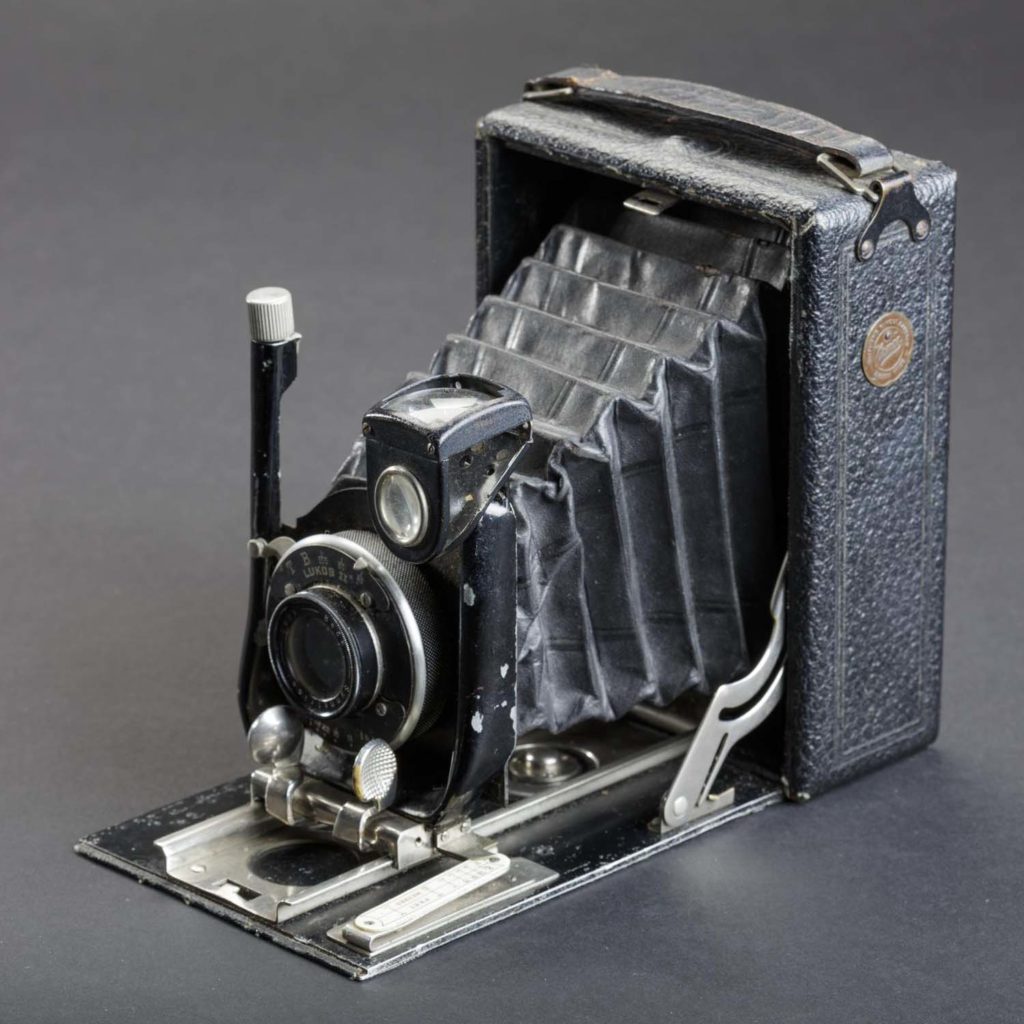 Although to modern eyes the fairies seem decidedly two-dimensional (even at the time several sceptics pointed to the fairies’ fashionable hairstyles), the idea of the existence of fairies at a time when millions mourned the dead of the First World War, captured the English imagination.

Conan Doyle became the fairies’ most famous advocate, when he was made aware of the photographs a couple of years later, even gifting the girls cameras to aid their visual chronicles of the fairy world, which he thought would help him advance the tenets of spiritualism, then at its zenith.

At the museum that now houses the original prints of these famous fairy photos together with correspondence between the cousins and watercolour sketches of fairies by Elsie, the Cottingley Fairies are one of the most popular exhibits. Now with the recent acquisition of the second camera gifted to the girls by Conan Doyle, the museum has all three cameras used by Elsie and Frances at the time.

“We are very excited to add the third and final camera from the story to our collections,” says Head Curator, Geoff Belknap of the newly acquired Cameo folding quarter-plate camera. “It is the second to have been gifted to the girls by Conan Doyle in 1920 and may have been used to take the final fairy image, which Frances maintained was real right until her death in the 1980s.”

The photo, Fairies and Their Sun-Bath, divided the cousins in later life when they finally admitted to the hoax in the 1980s. Until she died, Frances, who took the photograph, maintained that it was genuine whereas Elsie said all five were faked. And although curators can’t say with 100 per cent certainly that the newly acquired camera took this final photograph they know it was used by both of the cousins, because they continued to make photographs.

“They’re the only extant cameras in the world that are tied to the Cottingley Fairies,” adds Belknap, “and they tell us a full story about how they were using photography in that period.”

‘Alice and the Fairies’, July 1917. © National Science and Media Museum

The camera, which cost the not inconsiderable sum of £20, was made by W Butcher & Sons and has folding bellows that can collapse in on themselves, allowing it to be folded away and put in a bag, satchel or purse for transportation. It allowed Frances and Elsie to pick it up and take it wherever they wanted and snap what we would now regard as high resolution photographs.

“The first photographs were taken with their family’s camera, but then Arthur Conan Doyle got interested in the story, because he was famously a spiritualist, believed in our ability to study and understand the spiritual world especially through photography,” adds Belknap.

“Are the Cottingley Fairy photos about belief and collective grief after the First World War?”

“He bought these cameo cameras and gifted them to the girls mostly so that they could continue to prove that the fairies that they were finding were actually ‘there’. So the cameras are used essentially to continue the girls’ investigation into this fairy world.”

Conan Doyle famously published his beliefs along with the photos (with the girls’ names changed to Alice and Iris) in the Strand Magazine. He also talked about it quite widely and that’s where the Cottingley Fairies story really picked up steam. A further article appeared in The Strand in 1921 and he published a book called The Coming of the Fairies in 1922. The reception was, at best, mixed.

The famous author may have suspended his own disbelief in order to further his arguments, but in terms of the narrative of the history of photography, do the Cottingley fairy photos tell us more about belief and collective grief after the First World War or are they more important as one of the first and most famous examples of the manipulation of the photographic image? 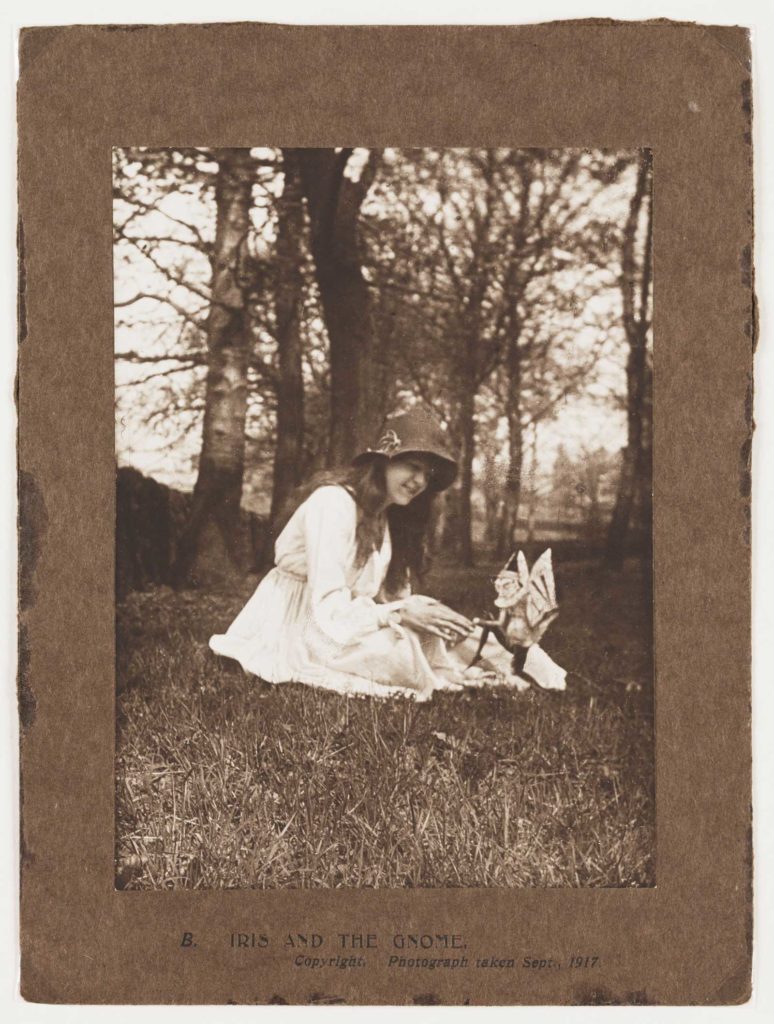 ‘Iris and the Gnome’ The second of the five photographs, showing Elsie with a winged gnome. © National Science and Media Museum

“Photography has always been manipulated,” says Belknap, “and you could tell the story around a hoax or around fakery, but for me the really interesting thing is the context of the period. Spiritualism had always been believed in, it had always had a long history, especially in Britain, but it was particularly high in this period because so many people had lost so many loved ones.

“So this story is about loss, it’s about how we believe photography can put us in touch with things that are invisible, things that we can’t see with our eye and how we give photography this power of an eye into a world that we don’t have access to. Photography is always something that we put value into and we make something out of photography. Photography doesn’t make itself. So that’s what is really fascinating for me.

“Today we may have a different level of scepticism, we’re used to forms of special effects and photo manipulation that are absolutely seamless. In the 1920s people may have had a similar scepticism but then as now there were plenty of people who would suspend their disbelief.”

There is another side of the story, which says Belknap, sometimes gets overshadowed by the celebrity of Conan Doyle, and that is the agency of the two young women, Frances and Elsie.

“These two young women essentially playing around with the tool and technology that is photography and making things, the craft and the ability for these teenage girls to be able to do that, is such a compelling part of the story.

“Even today, when we have pieced together the main pieces of the story, there is something about it that continues to resonate on many levels.

“I don’t think there is an end to it to be honest; we’re still fascinated by the story. I’m sure there’s a good group of your reading audience that would still believe in the possibility of it, because they left it potentially open to a fifth photograph being truly a representation of fairies, right? It is a story that still captures the imagination as it did in the 1917s and through to the 1920s.

“Photography still holds this value for being something that can capture our imagination more than just capturing ourselves. So I don’t think the story has ended. I think it will continue and maybe we’ll find a sixth or seventh photograph…”

The Cottingley Fairies prints, cameras and letters are now on display at the National Science and Media Museum in Bradford.

At the National Science and Media Museum, we explore the science and culture of light and sound technologies and their impact on our lives. We aim to inspire the scientists and engineers of the future to see more, hear more, think more and do more. Our galleries and exhibition spaces…