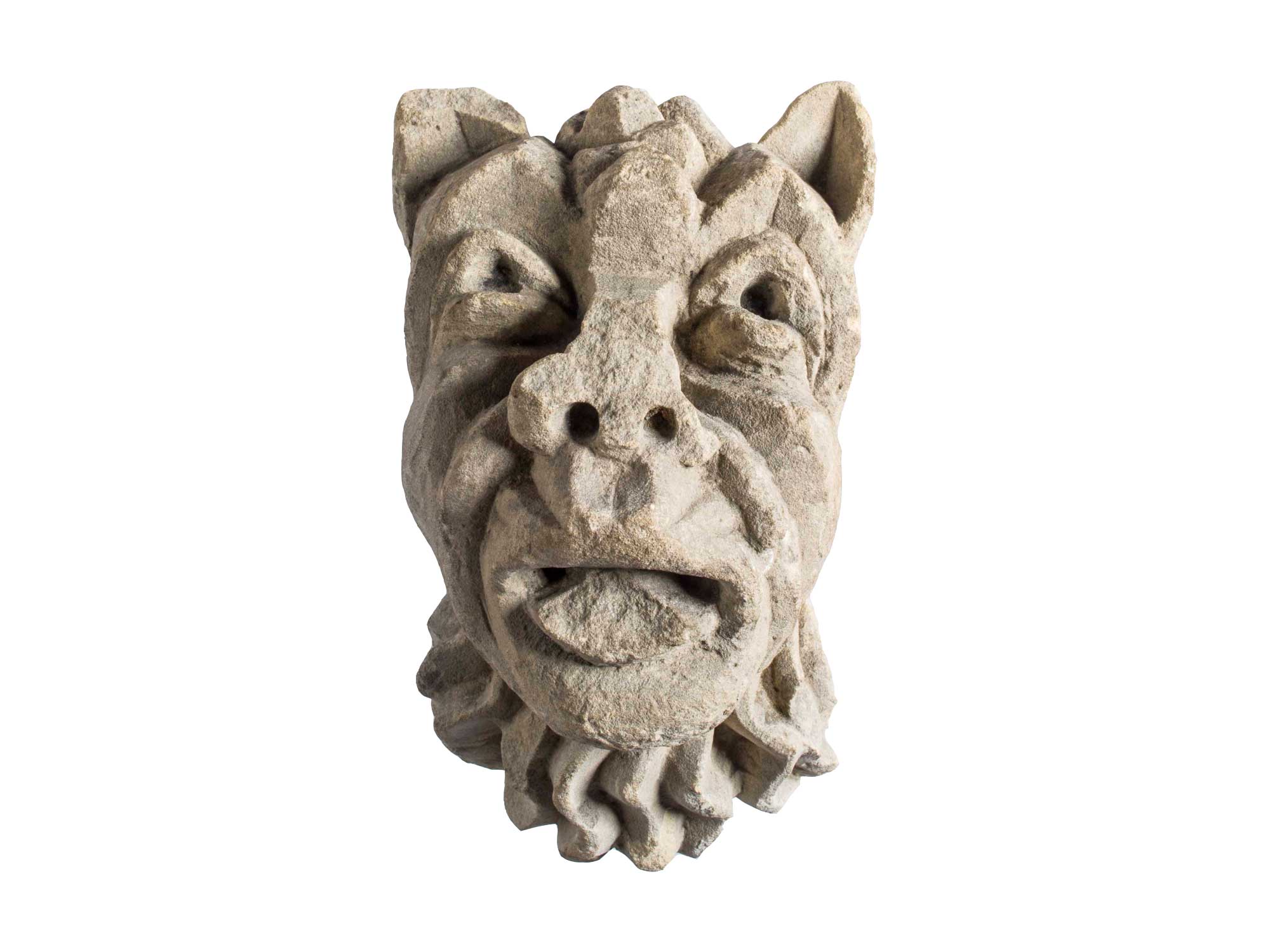 A stone animal head that once adorned the cpaitals and pillars of Rievaulx Abbey. Courtesy English Heritage

Medieval stone carvings, chess pieces, gold coins and other relics of the medieval world from the Museum collection at Rievaulx Abbey tell the story of the rise and dramatic fall of the first and most prestigious Cistercian Abbey in the North of England 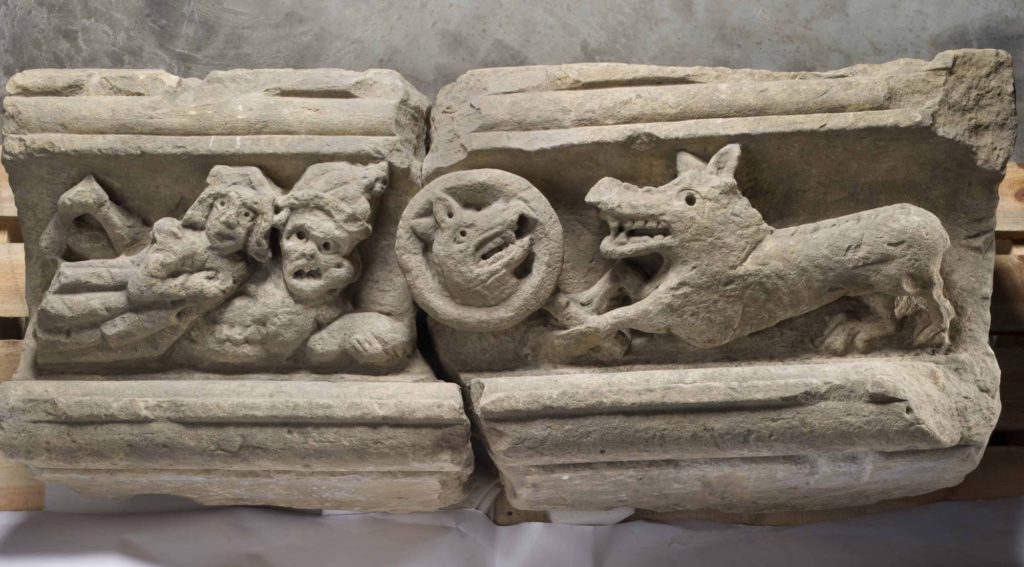 A limestone frieze from the Abbey infirmary. Courtesy English Heritage

A limestone frieze, originally from the infirmary hall at Rievaulx, depicts the theft of a tiger cub from its mother. This allegoric scene, in which the tiger is halted her own reflection, was a common one in the world of the medieval Bestiary, in which animals served as vehicles for moral or religious instruction.

This one teaches the need to avoid deception by the devil and, as well as giving ailing Cistercian monks something to ponder, shows the worldly awareness of the Rievaulx community. The Cistercians placed an emphasis on a return to an austere life and literal observance of the rules set out for monastic life by St Benedict in the 6th century. Their arrival in the north of England in 1132  sent shock waves through the Benedictine monasteries that had dominated England until then. 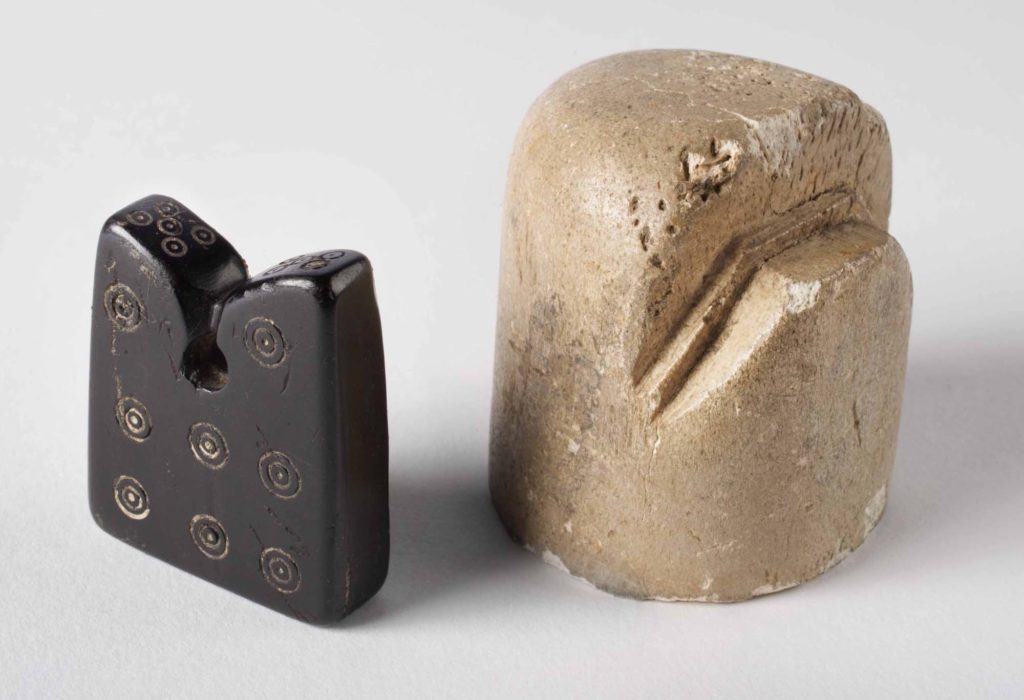 It is tempting to see these jet and bone chess pieces dating from the 11th to 12th centuries and found at Rievaulx as perhaps originating from the same set, with the white pieces made of bone and the black from jet and of comparable date, however these may represent chance losses.

The idea of chess may seem at odds with the austere tenets of the Cistercian monks, but the presence of 12th century chess pieces at Rievaulx does not mean they were devoting their time to pastimes at that point. They may have been an old set introduced to the site at a later date or may have belonged to visitors, and be indicative of a later less austere lifestyle than the earlier Cistercian statutes.

One of only four such objects found in the UK, this plaited metal medieval scourge was found during a clearance of the abbey in 1924. It is a very rare example of a personal scourge, and may have been used as a form of self penance or to punish sins.

Monks and minor clerics who had broken monastic rules or fallen into theological error were punished by scourging. The scourge was found in the Dayroom in the east range of the monastery where it may have fallen from the dormitory above. 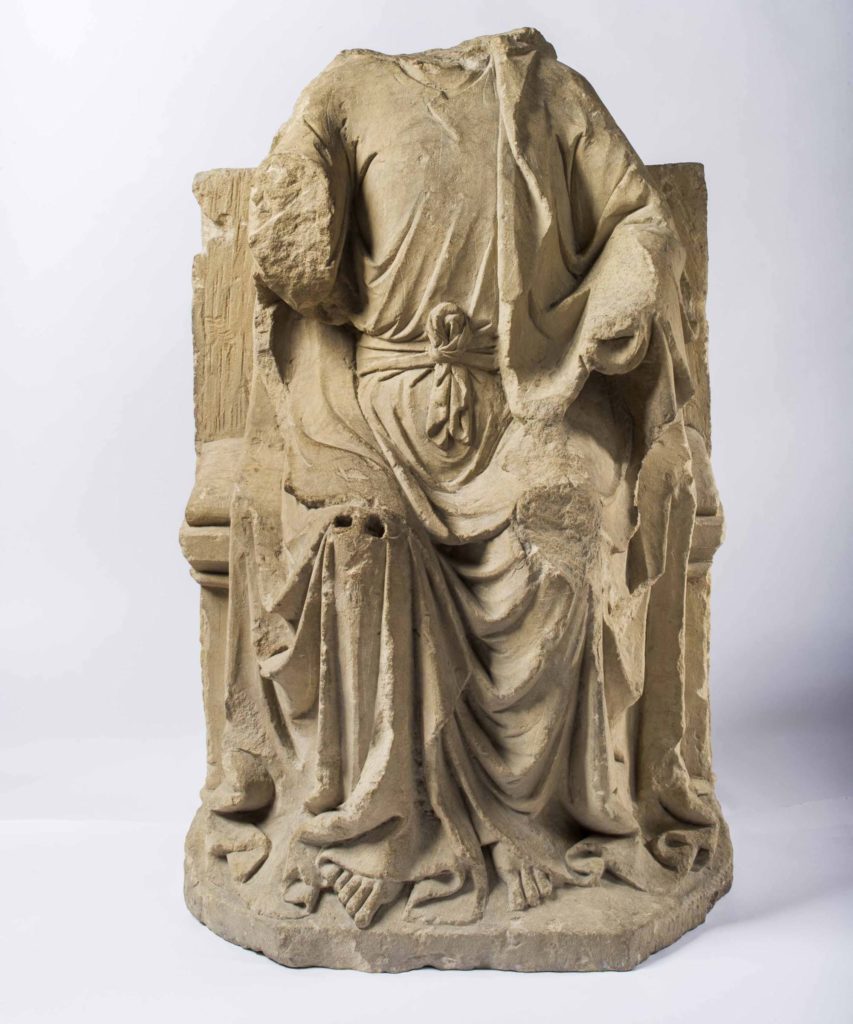 Christ in Majesty, a late 13th-century stone sculpture, probably from the pulpitum (the screen dividing the choic from the nave) at Rievaulx. Was this damaged during the dissolution of the abbey? Rievaulx Abbey was shut down on December 3 1538, as part of the Suppression of the Monasteries that took place under Henry VIII in 1536–40.

By this time Rievaulx’s community had shrunk to just 23 monks. The Abbey was sold to Thomas Manners (d.1543), 1st Earl of Rutland, who was closely associated with the royal court. Manners promptly set about dismantling it. This spectacular stone sculpture now takes pride of place at the entrance to the Rievaulx Abbey museum. 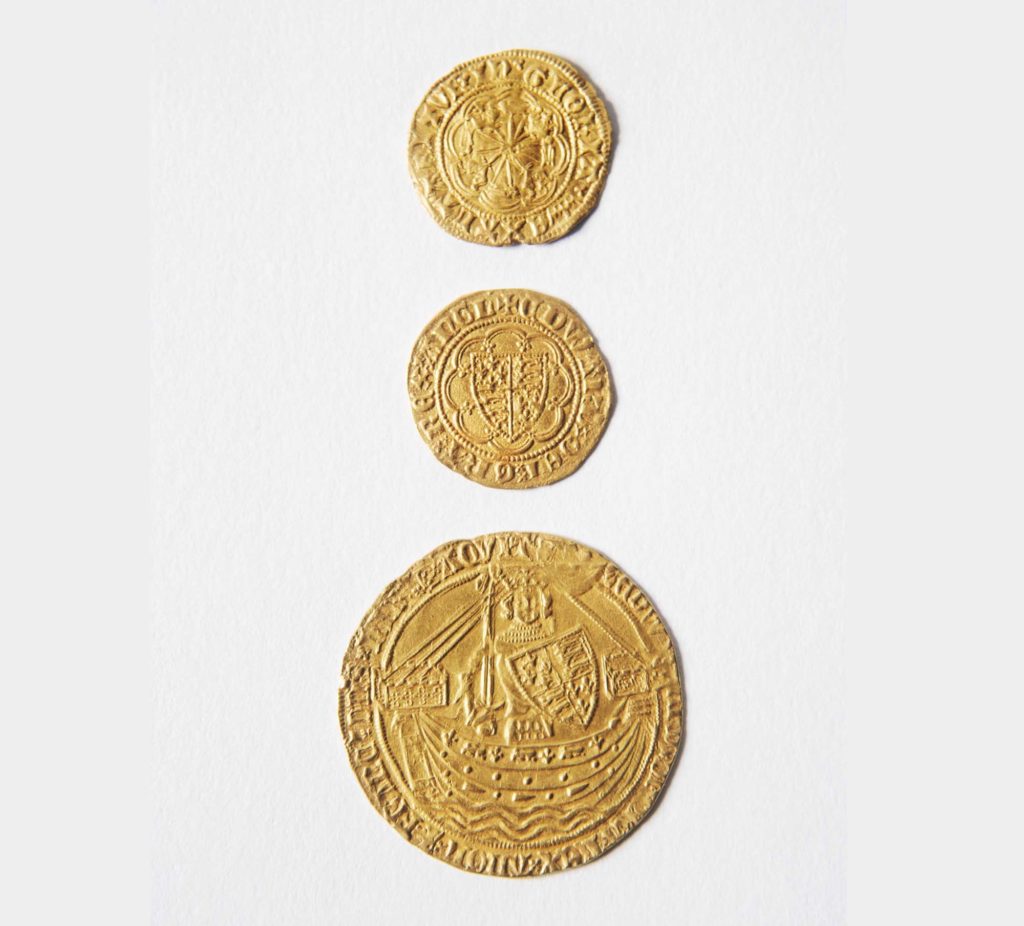 Gold coins, found in the treasury at Rievaulx Abbey.

Rievaulx was at the hub of a trade network that extended as far as Italy and the monks developed a profitable business mining lead and iron, rearing sheep and selling wool to buyers from all over Europe. Fleeces from the abbey’s flocks were particularly prized and Rievaulx became very rich.

These coins are nobles and half nobles, and were found in the treasury at Rievaulx, They are among the first gold coins to be minted in England. The bottom coin dates to the reign of Edward III (1312–1377) and shows the King holding a sword and shield in a ship to commemorate his victory at the Battle of Sluys in 1340. 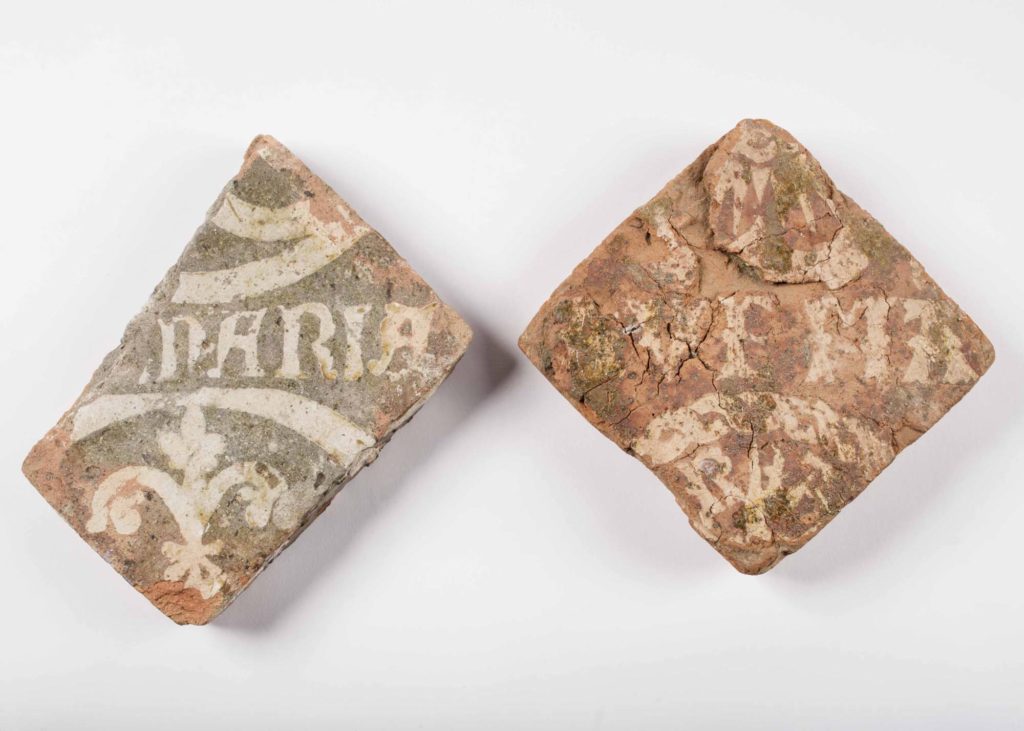 Ceramic floor tiles were a common feature in the religious buildings (monasteries, churches and chapterhouses) of Medieval England, having first appeared during the thirteenth century.

The rare ceramics, mostly dating to the 14th century, are the last survivors of thousands that once adorned the church floor at the spectacular 900 year old ruin. The interior of the medieval Abbey church would have been a blaze of colour, with bright walls and vivid floor tiles all contributing to the scene.

The most popular design for the decorative tiles was the f​leur­-de-lis, ​which is associated with the purity of the Virgin Mary in Roman Catholic iconography. These decorated floor tiles date to around 1300 and come from the nave at Rievaulx – as well as featuring the f​leur­-de-lis the left tile is inscribed with the words ‘[Ave] Maria’. 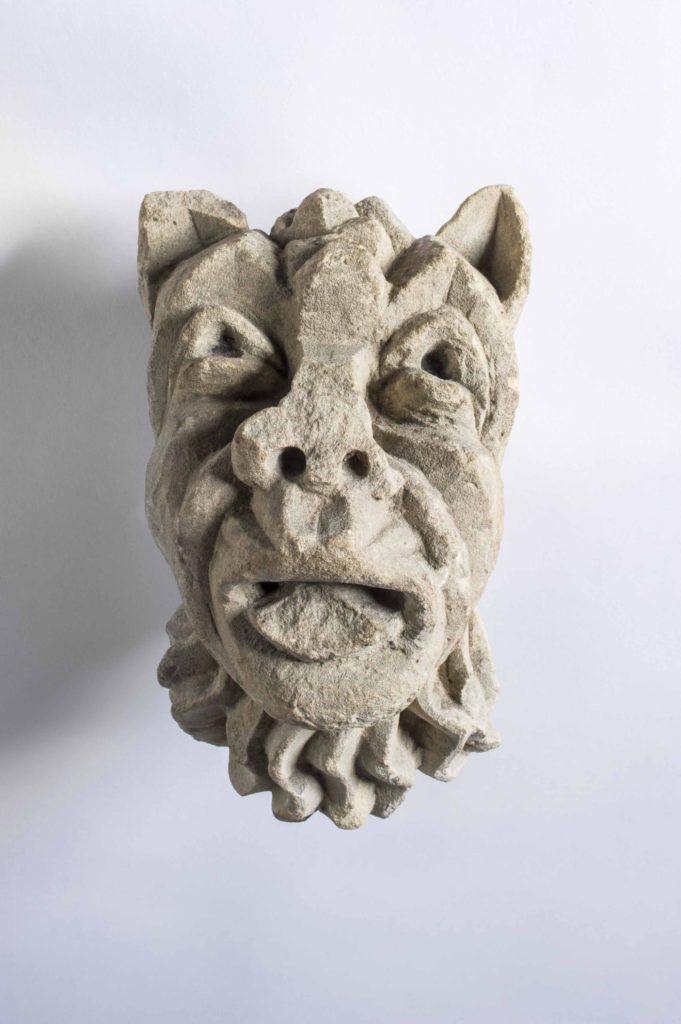 The construction of stone buildings began at Rievaulx under the tenure of Abbot William in the 1130s and Rievaulx’s most famous Abbot, Aelred, began building a monumental church in the late 1140s. The Building improvements continued into the 1220s when financial difficulties brought the building expansions to a halt.

This stone animal head was found within the ruins of Rievaulx Abbey. Many areas of the abbey would have featured carved animals, monsters, and humans (mainly those on the margins of society). Contrasting with the pious and serene faces of the divine carvings of the abbey, many of them were drawn from popular culture and have ancient pagan roots with purposeful warnings meant to contrast with the solemnity of holy men.

Carving from the tomb of Abbott William 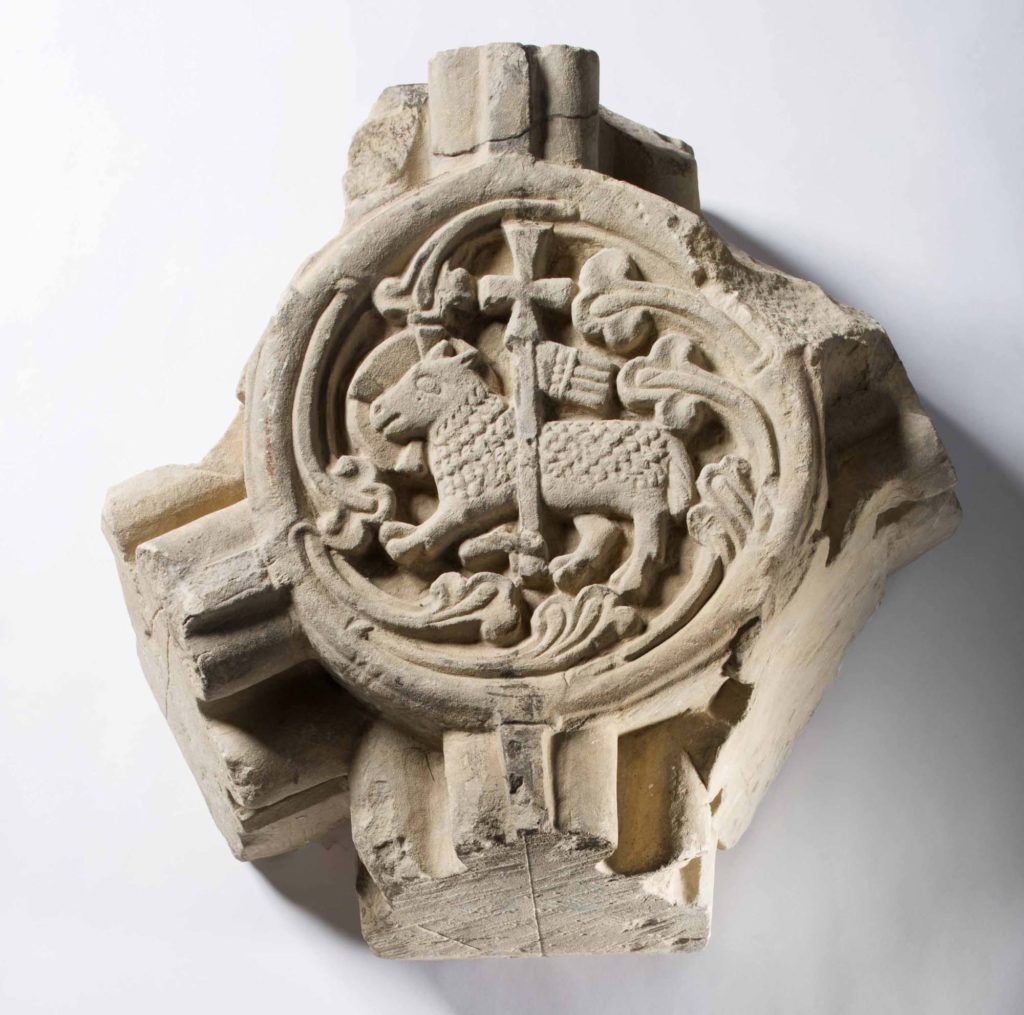 A 13th-century carved boss, originally from Abbot William’s shrine, it depicts the Agnus Dei, or the Lamb of God, which was a name for Jesus Christ. A native Yorkshireman, Abbott William was the first Abbot of Rievaulx  (1132–45) and was venerated as a saint for his piety.

The foundation at Rievaulx was carefully planned by Bernard of Clairvaux to spearhead the monastic colonisation of northern Britain and William dispatched colonies to establish daughter houses at Warden and Melrose in 1136, Dundrennan in 1142 and Revesby in 1143. 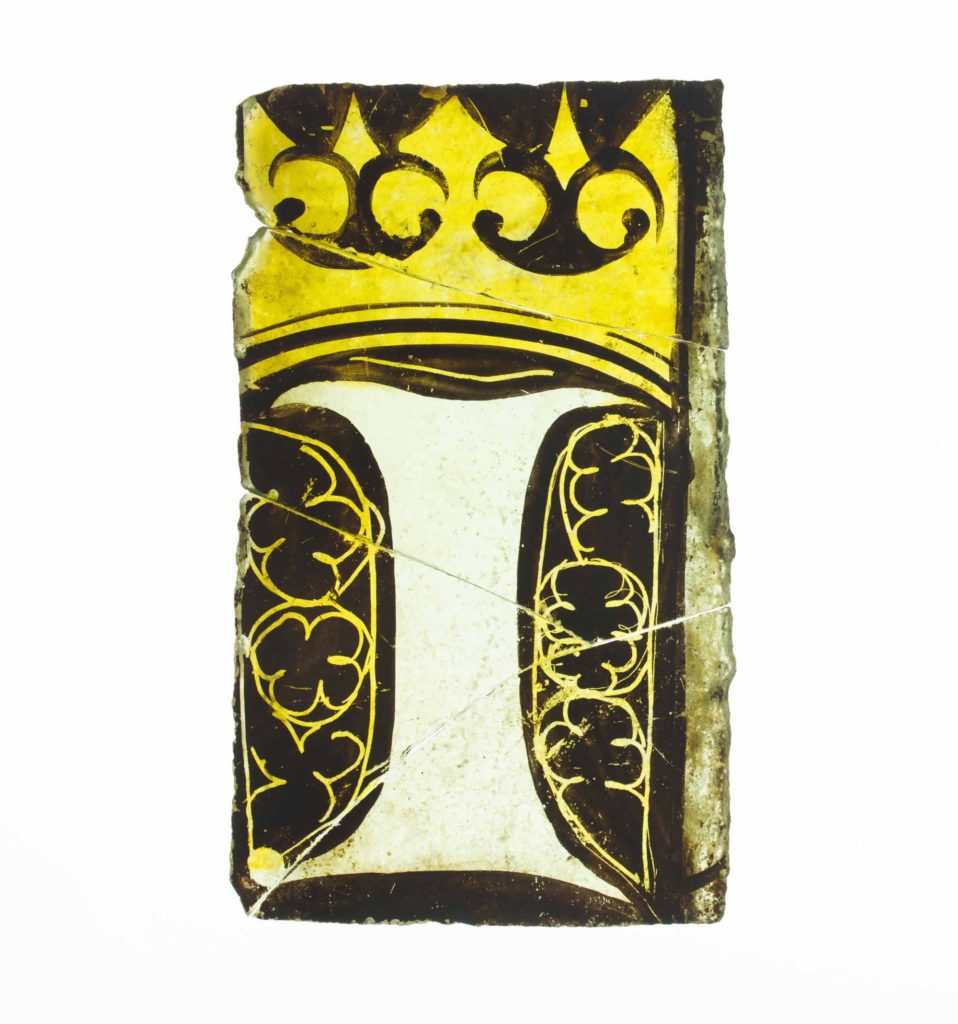 A fragment of 14th-century glass decorated with a crowned letter ‘J’. This rare survival was undoubtedly from one of the stained glass windows shattered during the English Reformation. The abbey was dissolved by King Henry VIII in 1538.

An early 16th-century Cistercian-ware cup from Rievaulx Abbey. The Cistercians took meals twice a day in summer and once in winter, with monastic diet depending on the seasons and produce available. By the late 15th century the Cistercian practices of strict adherence to an austere lifestyle according to Saint Benedict’s rule had been abandoned in favour of a more comfortable lifestyle.

The Royal stamp of Henry VIII 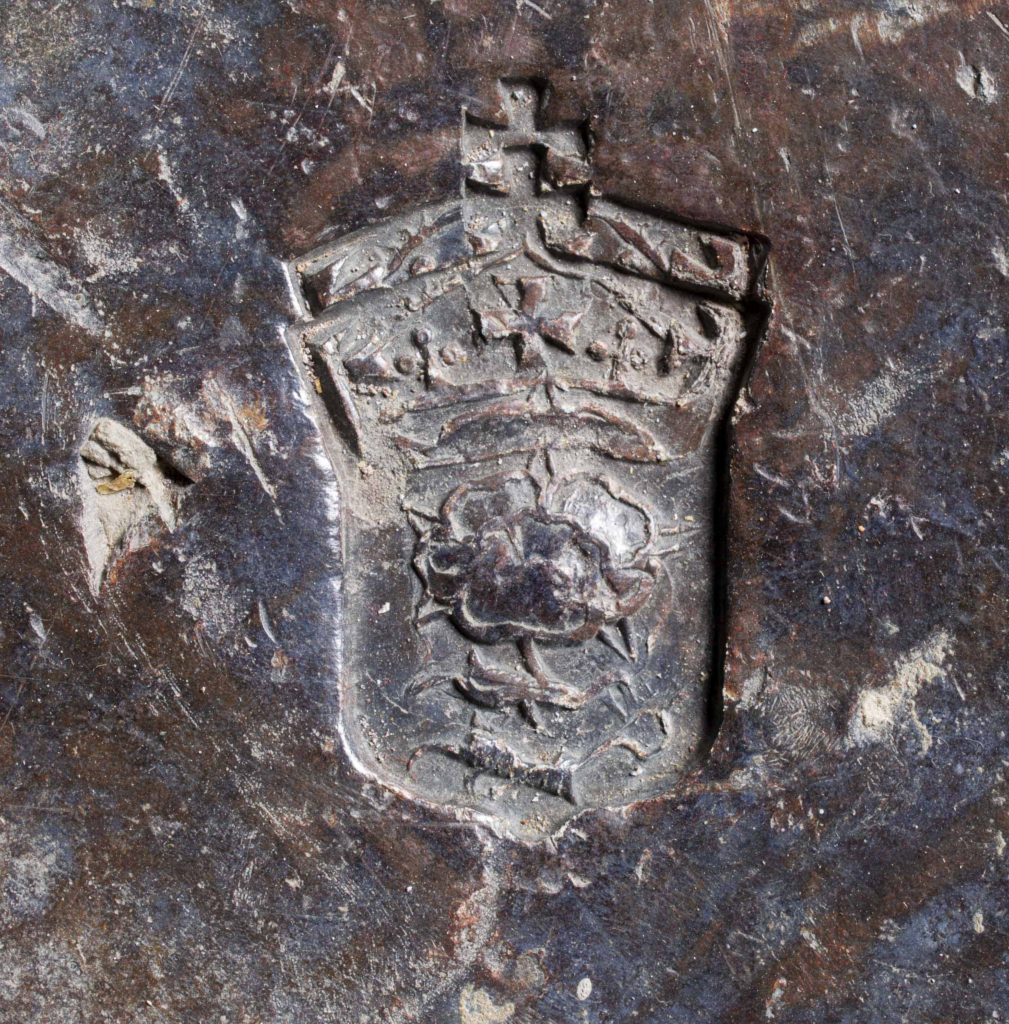 The royal stamp of Henry VIII.

Rievaulx Abbey was closed down  in December 1538, as part of the Suppression of the Monasteries that took place under Henry VIII between 1536 and 1540. When the 1st Earl of Rutland dismantled the buildings, he reserved the roof leads and the bells for the king. This is the royal stamp, complete with its Tudor Rose, of Henry VIII, located on a lead fother created from lead melted down from the roof of the abbey church. Fothers were a standardised weight load for lead and other materials such as straw or wood.

Rutland’s steward at nearby Helmsley, Ralf Bawde, recorded the process of dismantling, leaving detailed accounts of the process and the form and contents of individual buildings. The half tonne lead measure is a rare survival and was discovered under fallen masonry in the abbey church. Experts believe it may have been left behind as it was seen as too difficult to recover.

Discover these and other artefacts from the abbey’s rich past in the elegant Rievaulx Abbey museum.

Escape the crowds and experience the serenity and beauty of this impressive monastic site, situated in the middle of the North Yorkshire Moors National Park. Rievaulx Abbey was founded by St Bernard of Clairvaux in 1132 and become one of England's wealthiest monasteries before its dissolution by King Henry VIII…

2 comments on “11 relics of medieval England at Rievaulx Abbey”