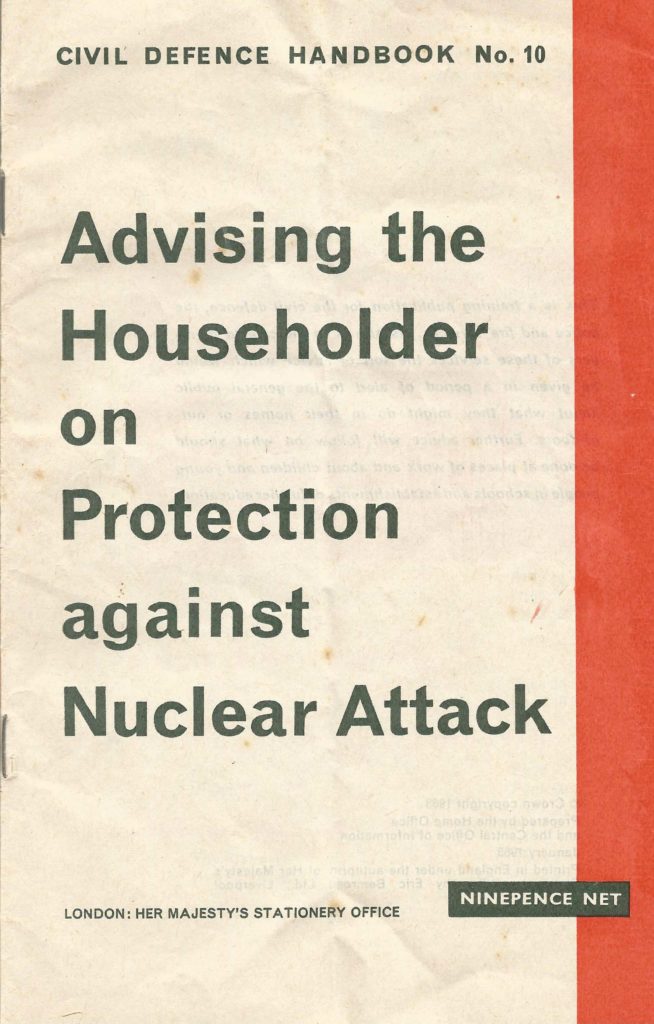 Advising the Householder on Protection against Nuclear Attack

Alexander Woodward, curator at Littlehampton Museum, on a collection that tells the often forgotten story of the Cold War in West Sussex

Visit any local museum and you always seem to find the same sections. You learn about our Victorian ancestors and life during World War Two. There will be an Archaeology Gallery, full of prehistory, even though archaeology explores all periods.

Don’t forget the agricultural artefacts or examples of local industry. But as you wander past the ‘battle bowlers’, baby respirators, flat irons and mangles, do you ever find a section dedicated to our Cold War heritage?

Why should you? The Soviet Union’s nuclear weapons did not rain down upon us, although we were threatened by several accidents with British and American weapons. Warsaw Pact troops did not march down our streets. There was no rationing or blackout.

Really, what impact did the Cold War have on the UK? For some communities the Cold War was their life. Consider the town of Mildenhall near the American air bases of RAF Mildenhall and RAF Lakenheath or the temporary community at Greenham Common. But what if yours is like the majority of communities that were not near to a major military or government site, surely the Cold War isn’t relevant to your story? 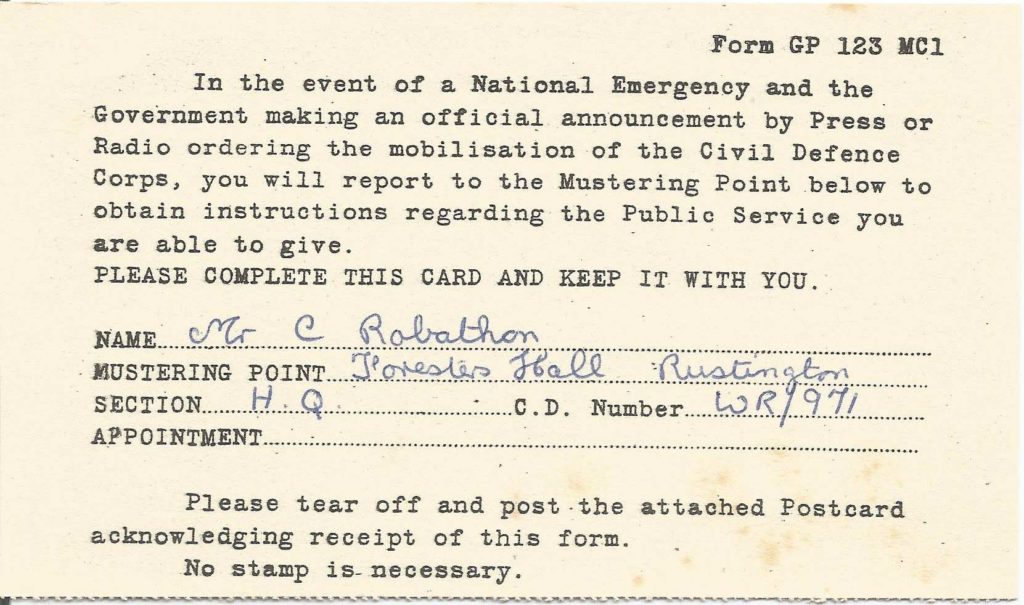 Of course it is. As a leading member of NATO, American ally and nuclear power, the United Kingdom was at the centre of the confrontation. From 1945 until the collapse of the Soviet Union in 1991, our governments spent trillions on military and civil preparations. How would our country be today if that had been spent on education, health and social care or infrastructure? Cold War policy was a big issue during elections. It shaped the UK today and will do so for many decades.

The landscape was altered, as mysterious structures appeared and great areas of land were fenced off. Even the soundscape changed with the noise of military aircraft overhead. Nuclear weapons were aimed at hundreds of targets across this small and densely populated country. Only people in the most isolated parts of Scotland and Wales would escape the explosions and fallout.

What about the local picture? Was there one? Could your community have a connection? Looking back, it seemed an intangible experience for civilians. Unlike the Second World War there was no bombing, no sirens and the government did not issue gas masks and bomb shelters. Most people continued their day to day business without giving it a thought unless something appeared in the news. So, it would seem the Cold War was not seen in local communities and left no traces?

Littlehampton Museum reveals why you shouldn’t be fooled by that intangible nature. Within its collections, spread across storage rooms, loan boxes and displays, is a small tourist town’s record of this global confrontation. Uniforms, documents and equipment remind us how its people prepared for the worse. Individually they disappear into the mass of social history. Each is only a pinprick into that era, reinforcing the intangible nature. Bring them together and you realise the collections strength and why it shouldn’t be neglected. 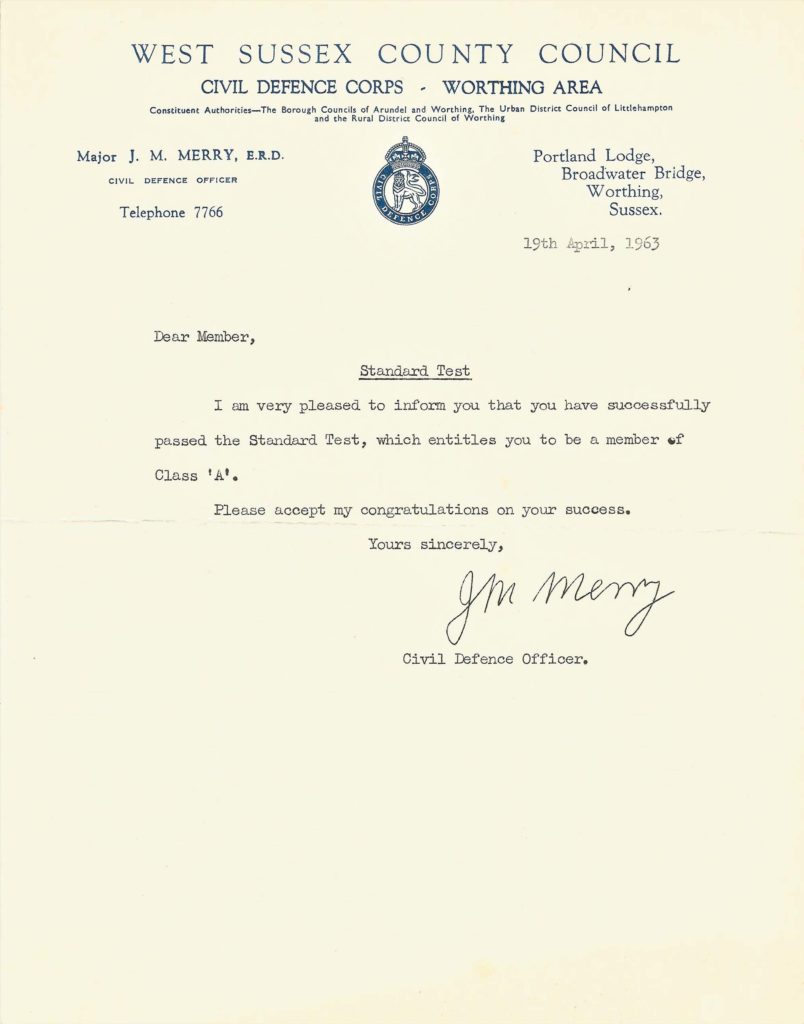 Littlehampton is not alone. Traces of the Cold War are found everywhere, in and outside museums, if you know where to look. Here are some examples to help understand this: 1,518 three person Royal Observer Corps (ROC) bunkers were constructed to monitor the impact of a nuclear attack. These fed information to 31 larger Group Headquarter bunkers, such as the one you can visit in York.

Have you ever noticed a concrete or steel girder tower alone in a field? It could be one of hundreds built for the microwave communication network. Large isolated concrete and brick structures next to a railway line could be one of approximately 400 depots for food, fuel and other materials. 7,000 warning sirens were spread across towns and cities. Local government was supposed to prepare command bunkers and supply depots. Beneath your town hall could have been the refuge from where senior staff would have managed the recovery of their district.

“How many people from your community volunteered for civil defence or the Campaign for Nuclear Disarmament?”

The country was also divided into self-governing regions that would substitute for the loss of central government and each had a primary and secondary command bunker. 603,000 people joined the Civil Defence Corps (CDC), Women’s Royal Voluntary Service and Auxiliary Fire Service. At one point the Royal Observer Corps had 25,000 members.

This is a very simple overview of Britain’s Cold War Civil Defence, which is difficult to do because it was chopped and changed so much, plus it was supposed to be secret. Hopefully it conveys the quantity and proximity to everyone of that material culture. Although your location may not have had an obvious link, through one or more of these preparations, the confrontation probably crept into your community. Not too far away will be an ROC bunker, your local council had an emergency headquarters and how many people from your community volunteered for civil defence or the Campaign for Nuclear Disarmament? 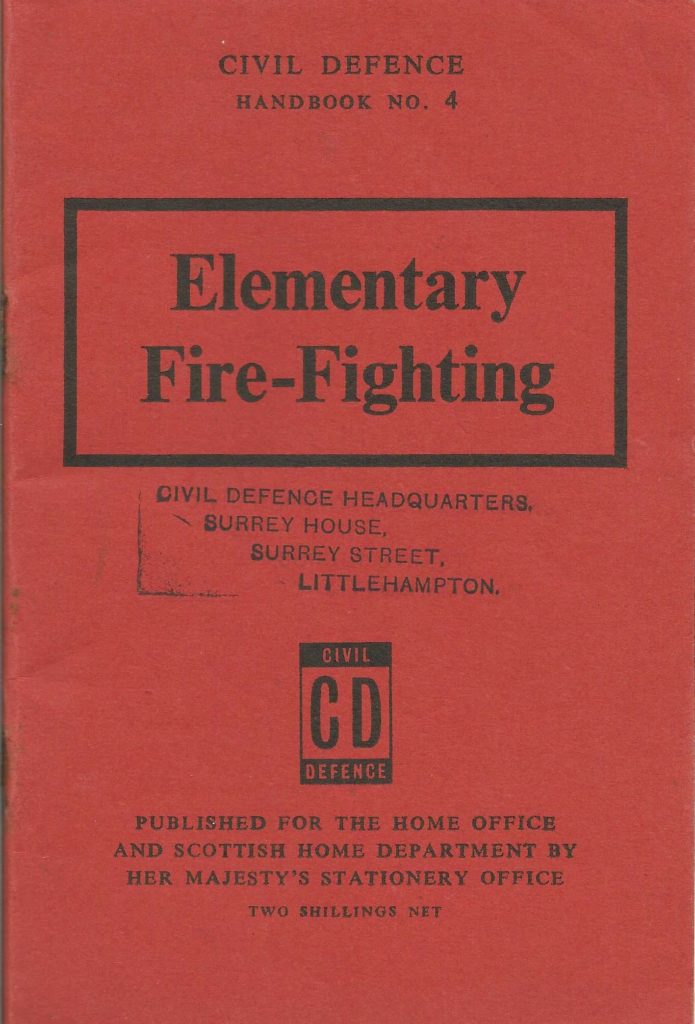 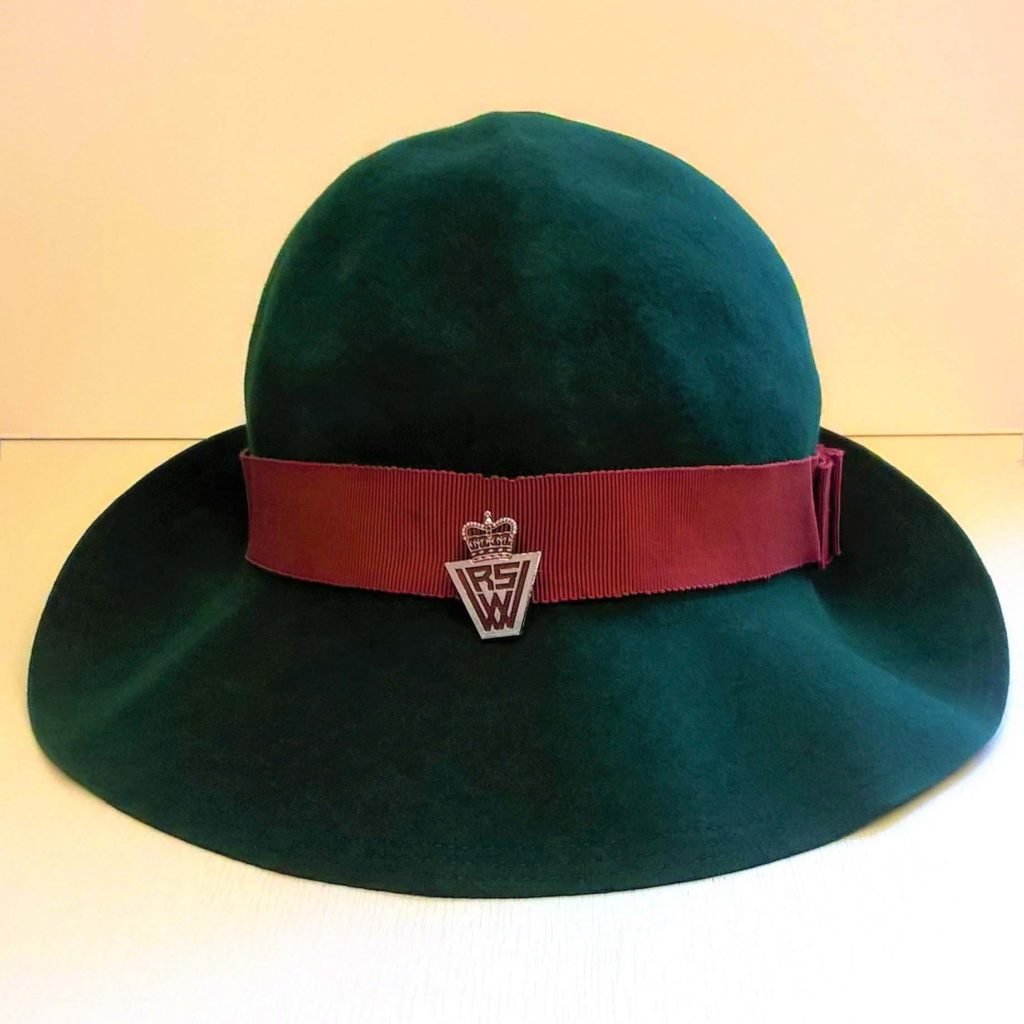 Looking at Littlehampton’s Cold War artefacts gives an identity to some of those 603, 000 civil defence volunteers. One donation came from a Mr Charles Robathan, a volunteer in the Civil Defence Corps. Proud of what he did, he kept his mementos. Later he believed these prized possessions should be preserved in the town’s museum and his donation reveals how his career progressed from 1962-1968: Training certificates, memos from Worthing headquarters and eventually the letter sent to all members of the CDC when the Corps was disbanded in 1968, in which the Queen thanked them for their service.

These are very personal items and you can imagine the pride he felt with the award of each new certificate. He wasn’t alone and, in the collections, you will find donations from William J Cook of the CDC and Women’s Volunteer Service member Mrs H F Stromwell.

Just as personal is the suitcase of Royal Navy sailor J. Reilly. Inside the lid he wrote the history of his postings from 1955-62. Now that it is on display you can follow his movements across Britain and Bermuda. It’s good to have contact with the people behind the event.

On the other hand, is the very impersonal steel girder from Poling radar station. This right angled 170cm section has no markings and does not look at all interesting. However, if you know where it came from you realise it was part of a much bigger structure designed to protect our parents and grandparents from attack by Soviet bombers. 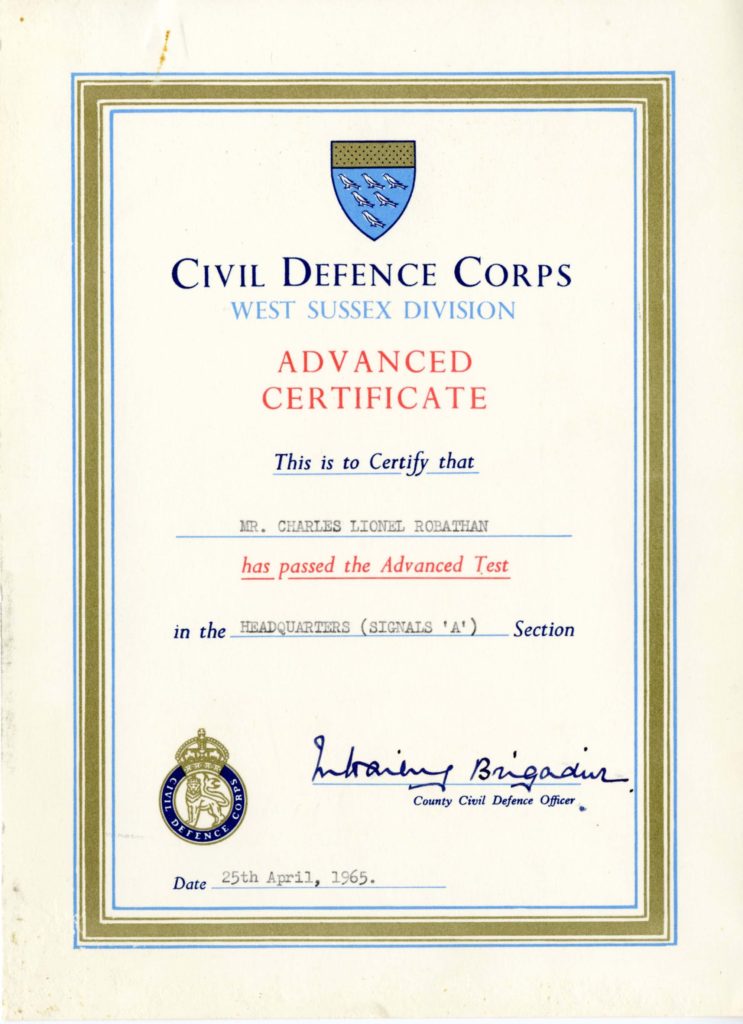 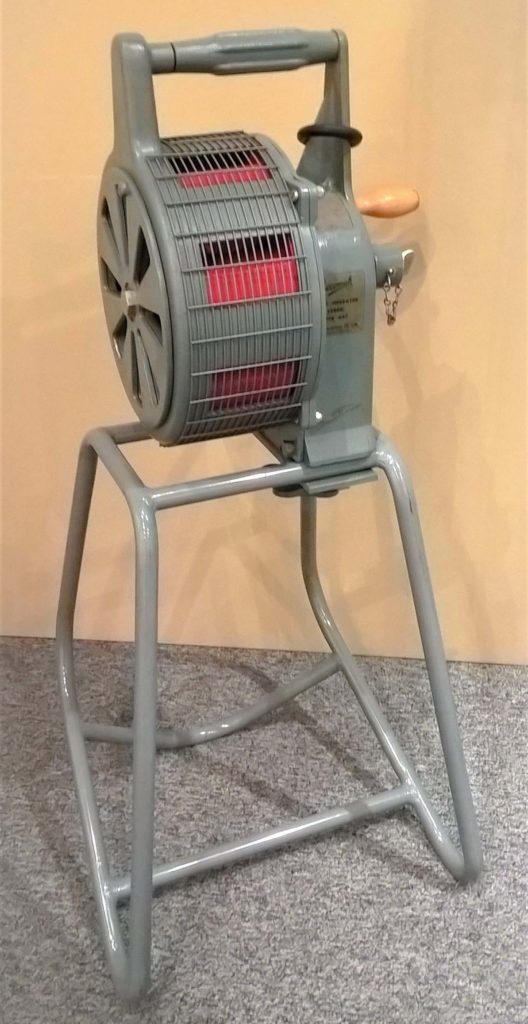 There is also evidence of the Cold War entering the daily lives of residents who did not play a part. Civil Defence Handbook No. 10, “Advising the Householder on Protection against Nuclear Attack” was published in 1963 and sold for nine pence. This was the only government information if you wanted to know how to protect your family from attack. Its advice, such as white washing windows, was immediately criticised in Parliament, but wasn’t replaced until 1980.

In what we believe to be a geography project, a school pupil drew two simple maps of the town centre. Not only do these give the locations of local businesses that no longer exist, they also give the location of the Civil Defence Corps office. We already knew the address as it was stamped on instruction manuals, but could not locate the building. Thanks to the map we then understood the building had since been demolished and replaced with flats. In return the Cold War helped to date the maps, which could not have been produced after the Corps was disbanded in 1968.

“Why don’t more museums talk about the Cold War story?”

There are also the memories and the recollections of those who witnessed it. Casual conversations have provided extra details of Littlehampton’s story and suggested the potential for an oral history project

Why don’t more museums talk about the Cold War story? Based on their resources, every Museum makes a judgement about which topics to explore. It maybe they think its significance to the nation and their community is too little for it to be included. It maybe because traditionally they have not looked at this and changing old habits is hard. 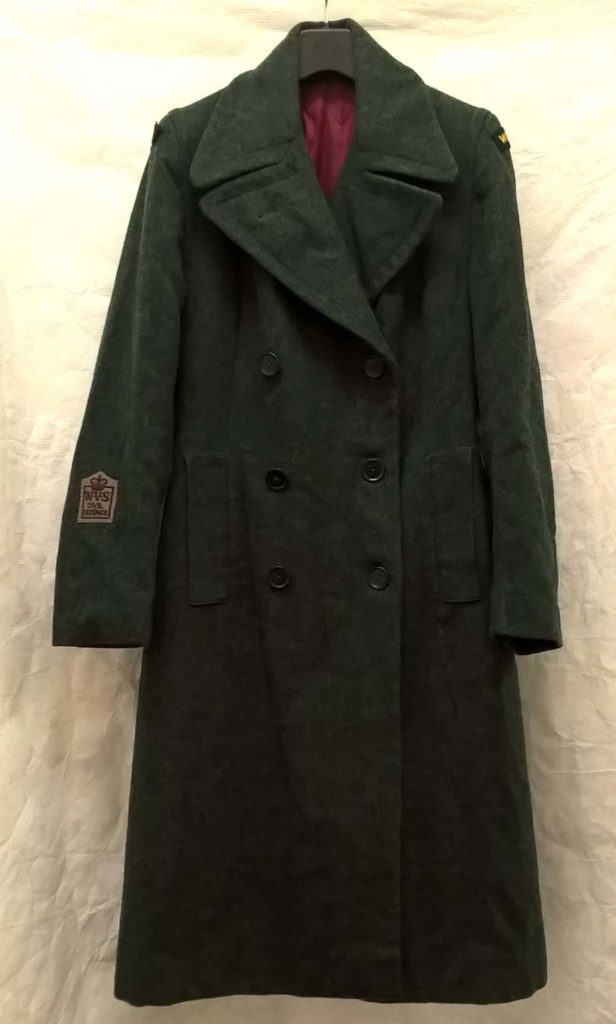 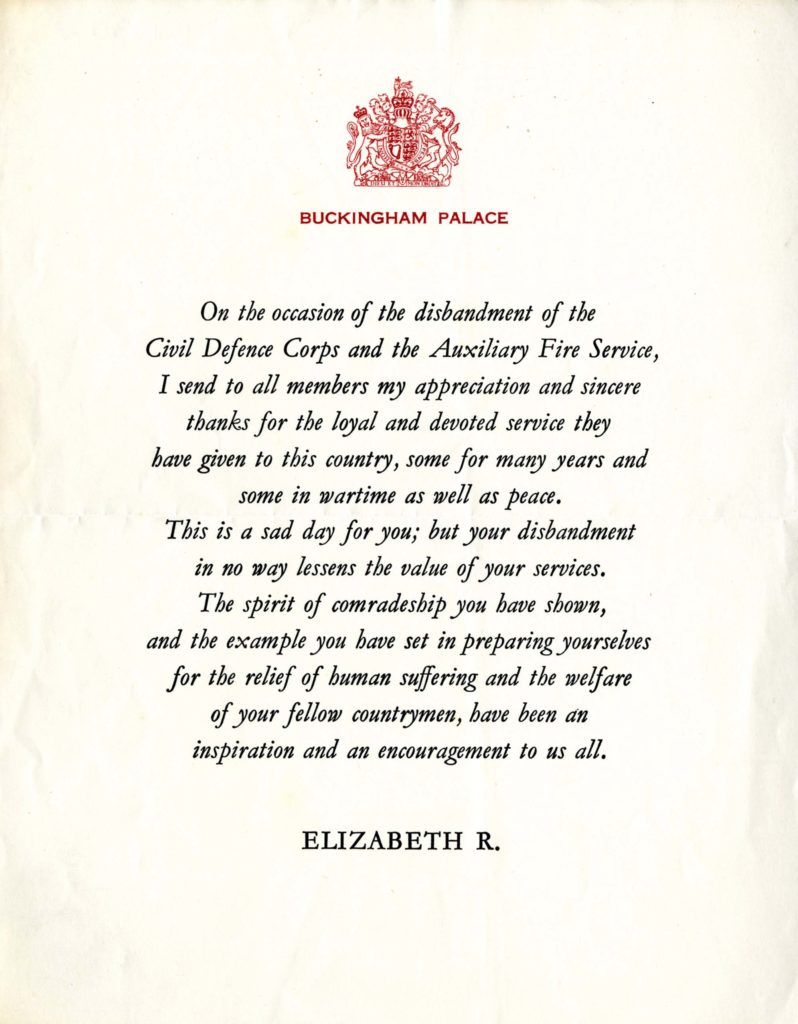 The Queen’s thank you letter to all members of the Civil Defence Corps. Courtesy Littlehampton Museum

They may not realise they have a Cold War collection. Museums do confuse Cold War objects for World War Two relics. So little is known of our Cold War heritage it is assumed that anything bearing the term ‘Civil Defence’ must be connected with the Second World War.

One of my pet peeves is seeing the bright yellow armband of the Civil Defence Corps installed in Second World War displays. The Corps was not sanctioned until 1947, so you probably understand why my blood boils every time I see this.

What part can museums play in exploring our Cold War heritage and preserving its material culture? They need to play as strong a role in this area as they do in any other. Museums are one of the pillars of our cultural heritage and in conjunction with surviving structures, archive services, independent researchers and those who participated, can ensure it remains in the public consciousness. Unbeknownst to them, many museums may already be on the first rung of doing so.

Littlehampton Museum is in the heart of the town centre and offers a fascinating insight into the community’s social history through a variety of exciting galleries, many with audio points and interactive elements to help guide you through the history of the town. Admission and helpful advice is all FREE…

One comment on “Exploring the relics of Britain’s Cold War”