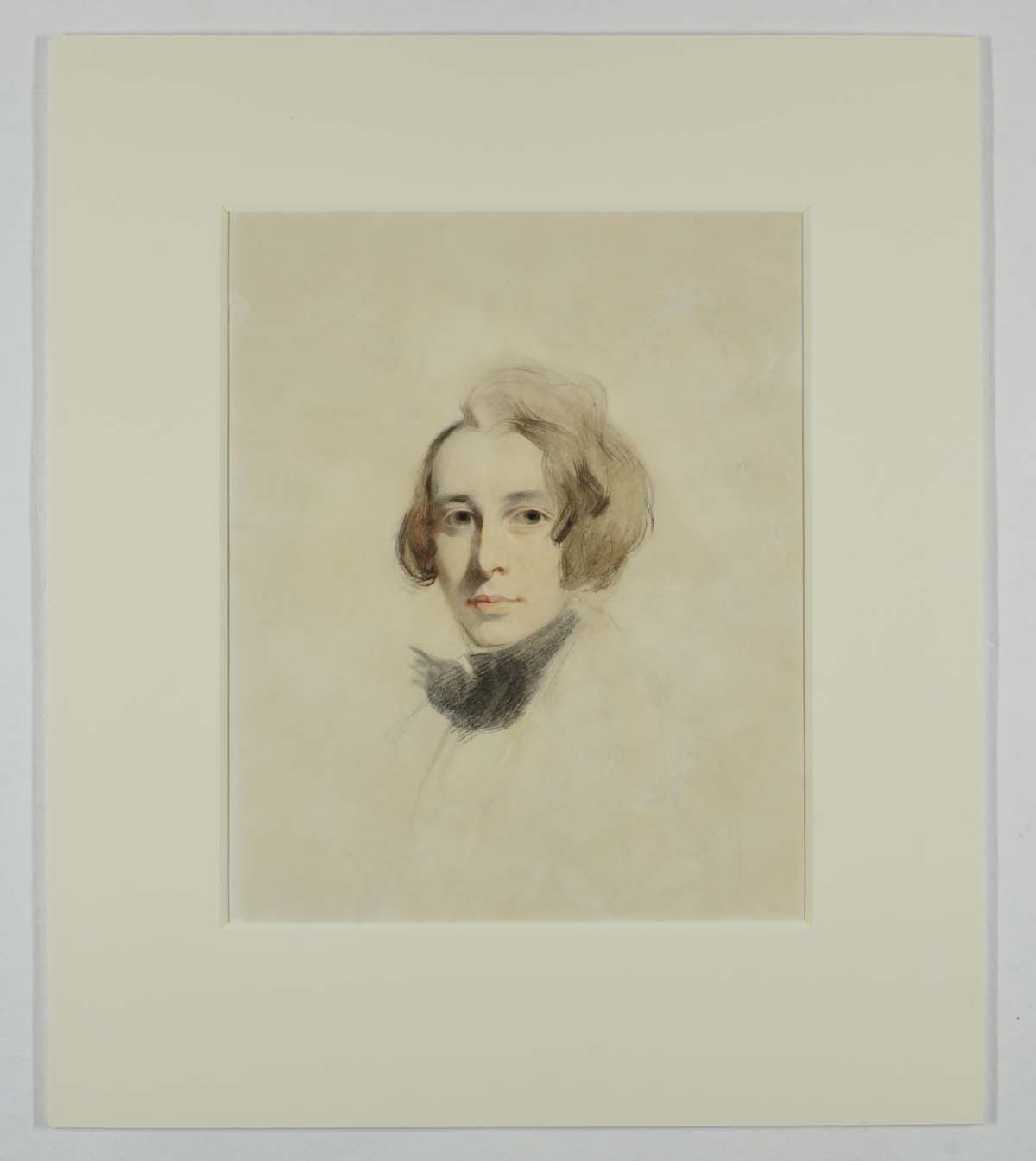 sketch of Dickens by Lawrence in chalk and pastels, c.1837

Charles Dickens’ secret gin supply, his anguish while writing The Old Curiosity Shop, details of his marriage, works-in-progress, relationship with fans, family and friends, and getting stuck up a mountain with Wilkie Collins are just some of the varied insights to be found in an extraordinary cache of letters and other treasures acquired by the Charles Dickens Museum in London.

The Museum in Dickens’ former home in Doughty Street, which was acquired by the Dickens Fellowship in 1922 and opened as museum in 1925, has acquired the 300-plus items from an American private collection, reckoned to be the most substantial private collection of Dickens material in the world.

They include 144 handwritten letters by Dickens (25 of which are unpublished), personal items including writing implements and jewellery, original artwork by the illustrators of Dickens’s books, including George Cruikshank, John Leech, Hablot Knight Browne (Phiz), Joseph Clayton (Kyd) and Frank Reynolds, 50 unpublished manuscripts and letters written by others in Dickens’s circle and 25 books from Dickens’s own library.

The vast well of insights this incredible haul offers fresh appreciations of the life, work and character of Charles Dickens (7 February 1812–9 June 1870), some of which will be new to Dickens scholars and fans, 150 years after his death.

A heart-shaped locket owned by Mary Hogarth and containing a lock of Dickens’ hair. 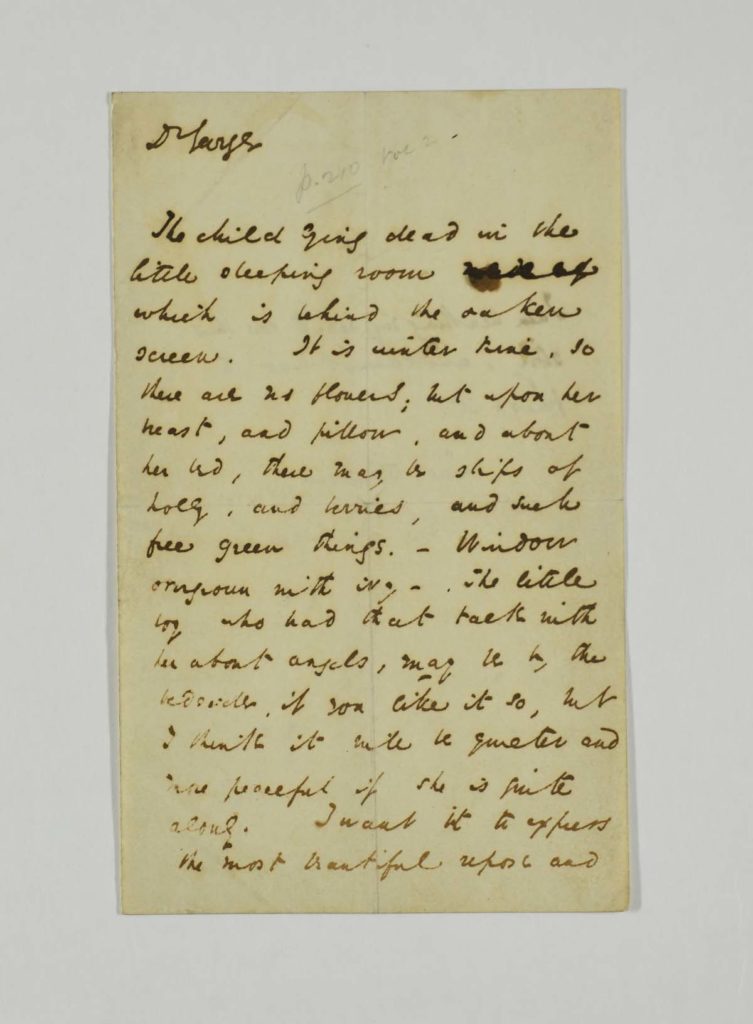 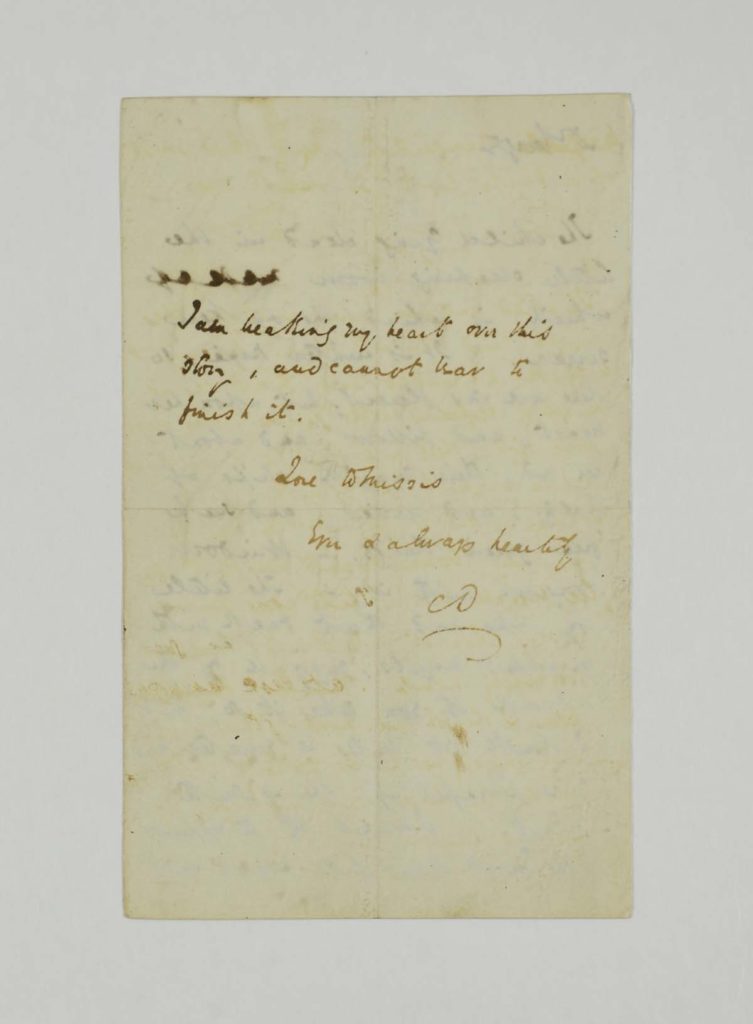 The letters also reveal how he didn’t reserve his bursts of ‘Dickensian’ prose just for the published works.

An unpublished letter written on 5th August 1846, during a visit to Switzerland includes this passage:

“…fancy walking from this [heat] … on to a sea of ice, unfathomable in depth, five and twenty miles long, and tossed up into immense waves, like the spires of Gothic Churches! Picture me clambering over this, with a great leaping pole, and half a dozen iron points buckled on to the soles of my shoes, and washing my face with snow, and going down to drink melted ice like chrystal [sic], and staggering and hauling myself up into places like Dreams, under the direction of a mountaineer-guide…”

“I doubt very much we can go on to Doncaster…”

Dickens the would-be outdoorsman emerges again in a letter he penned in September 9 1857, recounting the tale of getting lost up a mountain with Wilkie Collins during a walking tour of Cumberland, due to the directions of an incompetent (according to Dickens) guide:

‘…the Guide might wander where he would, but we would follow a water-course we lighted upon…This necessitated amazing gymnastics. In the course of which performances, Collins fell into the said watercourse with his ankle sprained, and the great ligament of the foot and leg swollen I don’t know how big…what a business it was to get him down…we got off the mountain somehow…I don’t believe he will stand for a month to come! We laugh at it all – but I doubt very much we can go on to Doncaster…he really is so crippled. We have resolved to fall to work tomorrow morning and begin our writing…’ 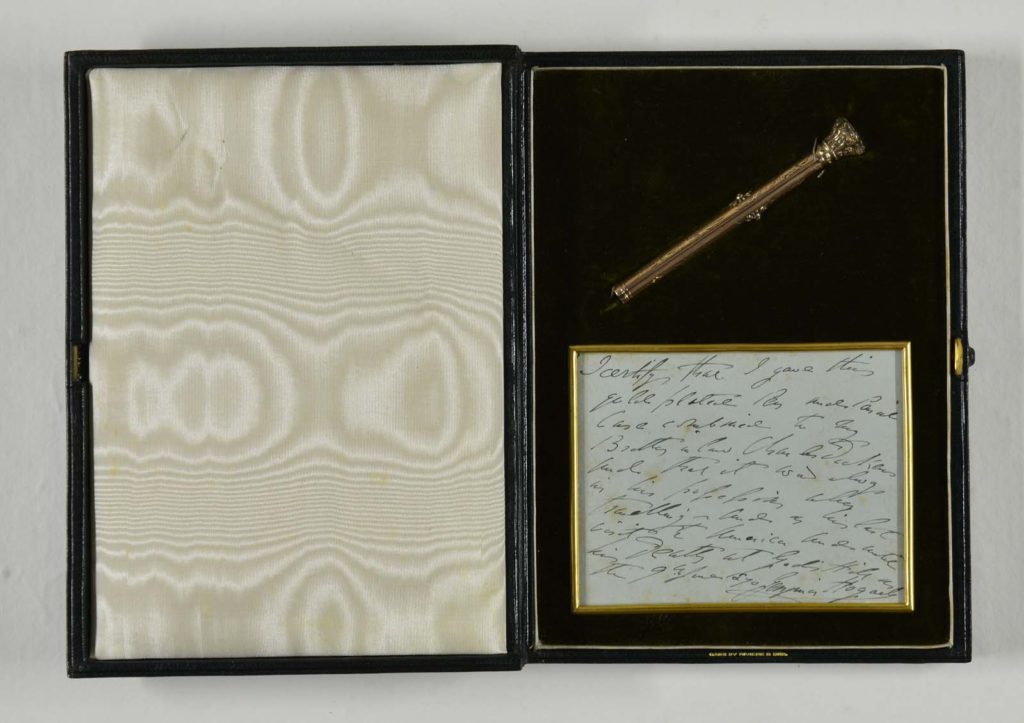 Gold pen and pencil with case.

An unpublished letter (November 9 1843) sees Dickens writing A Christmas Carol: ‘I have half done the Christmas book, and am resting for two days before going to Chuzzlewit [Martin Chuzzlewit, his 6th novel] – that is, if I can call anything rest, with that before me. Yesterday I walked a great deal. Today I am going out on horseback, for a thirty mile ride.’

The collection reveals Dickens’s state of mind while writing; the well-known mutual affection between Dickens and his sister-in-law Mary Hogarth, who died at Doughty Street in 1837 at the age of 17, is clear. Dickens drew on his grief at her loss when writing the death of Little Nell in The Old Curiosity Shop. On 22 December 1840, when describing his vision for the illustration of the scene in a letter to the book’s illustrator, George Cattermole, he writes, ‘I am breaking my heart over this story, and cannot bear to finish it’.

The letter and a portrait of Kate Nickleby by illustrator Hablot Knight Brown (Phiz), thought to be based upon Mary Hogarth, will be displayed in the room at the Museum in which she died. In another letter (15 January 1841), Dickens writes:

‘I have been breaking my heart with such constancy over the Curiosity Shop, that I have not been able to write one note since I received your welcome letter…’

Amassed over four decades, the collection includes rare correspondence with his father John Dickens, his son Charles, together with surprisingly tender letters to fans and an autograph (handwritten) manuscript excerpt from David Copperfield. Personal effects including a golden writing implement which doubles up as both pen and pencil.

‘Dickens The Great Magician’ watercolour by Kyd (no date). 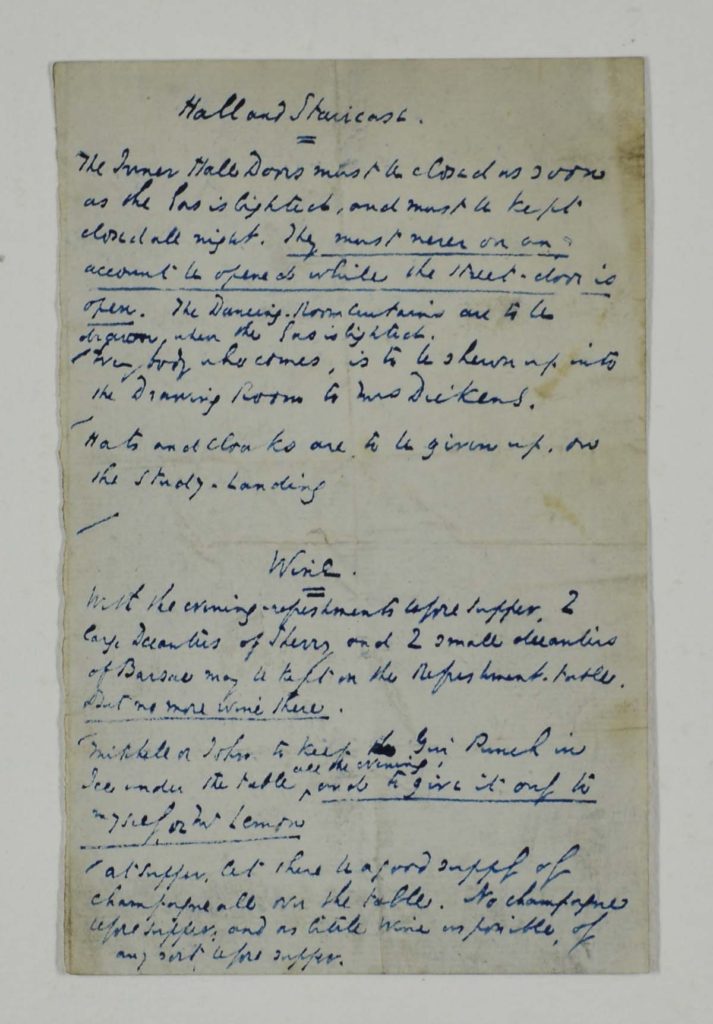 Instructions from Dickens to his butler for a dinner party

The intricacies of Dickens’ home life are well documented, but the collection also adds more rich detail including the level of involvement of this most social of authors in the arrangements for a dinner party, whose guest list included Mark Lemon, the founding editor of Punch magazine.

Covering instructions for the ‘hall and staircase’, including which doors are to be kept closed, where the coats should be taken and when the curtains should be drawn, the letter reaches a section headed ‘wine’: ‘At supper…a good supply of champagne all over the table. No champagne before supper and as little wine, as possible, of any sort, before supper’. Gin punch to be kept ‘in ice under the table all the evening [to be given] only to myself or Mr Lemon’.

The famously fraught relationship with his wife Catherine, who bore him ten children but with whom he eventually separated, emerges in a letter (dated January 1 1848), referring to her miscarriage: ‘a miscarriage, in short, coming on, suddenly, in the railway carriage…obliged to call in a famous doctor. She seemed quite well until this morning, when she was again taken violently ill – another famous Doctor called in’. Catherine had already given birth to seven children and would birth the couple three more.

Commenting on their separation in 1858, Dickens writes ‘When I was young I made a miserable mistake, that is all’ (April 8 1860). There is also a letter (September 16 1857) to the mother of Ellen Ternan, the woman whose relationship with Dickens led to his separation from Catherine.

The collection also includes artworks, among them a delicate drawing in chalk and pastels by Samuel Laurence, which was thought to be lost and a collection of 40 beautifully-designed playbills, including very rare notices for private performances at Dickens’s home. 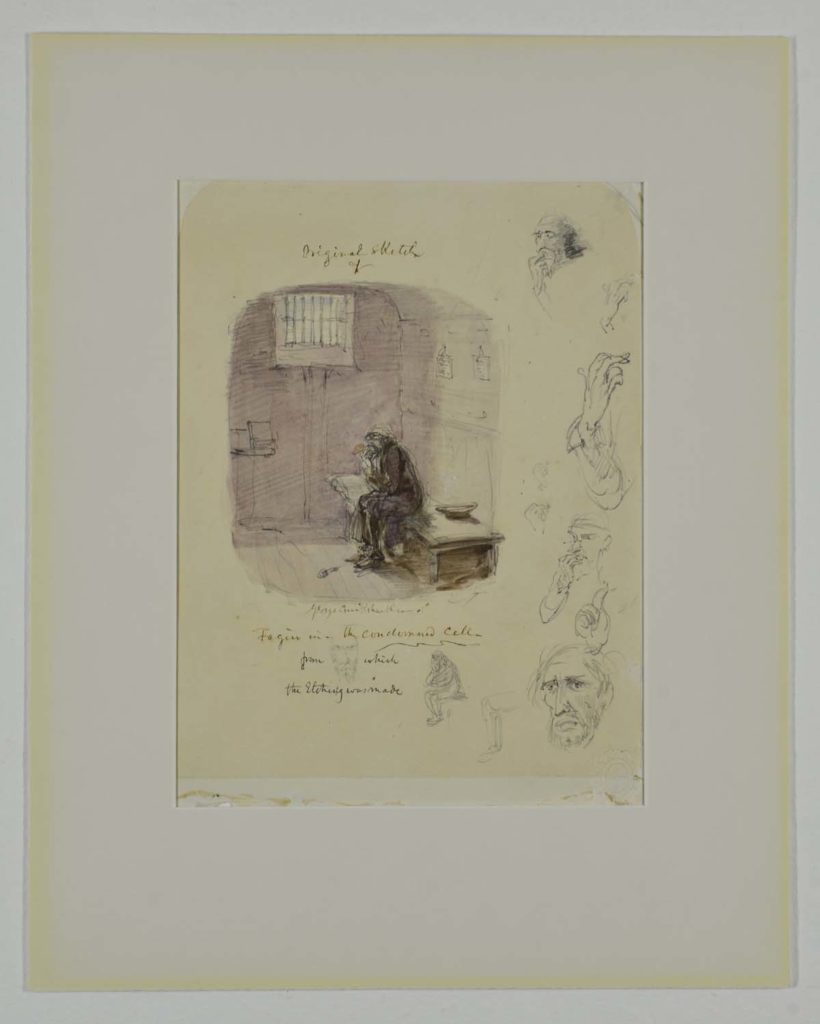 ‘Fagin In The Condemned Cell’, by George Cruikshank, in pen, pencil and wash.

Silver and agate locket with lock of Mary Hogarth’s hair

A set of household account books from Gad’s Hill Place, Dickens’ Kent country retreat and later home, begins in April 1866 in Dickens’s hand but is completed shortly after his death by his sister-in-law and housekeeper, Georgina Hogarth, with the touching words: ‘So ends the dear Gad’s Hill Housekeeping August 1 1870.’

Mark Dickens, Chair of the Board of the Charles Dickens Museum said: “As the great-great-grandson of Charles Dickens, it is an honour to represent the Museum at a highly significant moment in its history. The Museum already holds an impressive collection of Dickens-related material, and this quite staggering material brings us even closer to the man himself, his character, feelings, family and friends.”

The acquisition has been made possible by a grant of £1.22m from the National Heritage Memorial Fund, together with substantial contributions from Art Fund, Friends of the National Libraries and the Dickens Fellowship, totalling £1.8m.

Number 48 Doughty Street is the only remaining London home of eminent Victorian author Charles Dickens. Dickens described the terraced Georgian dwelling as 'my house in town' and resided here from 1837 until 1839 with his wife and young family. Two of his daughters were born here, his sister-in-law Mary…