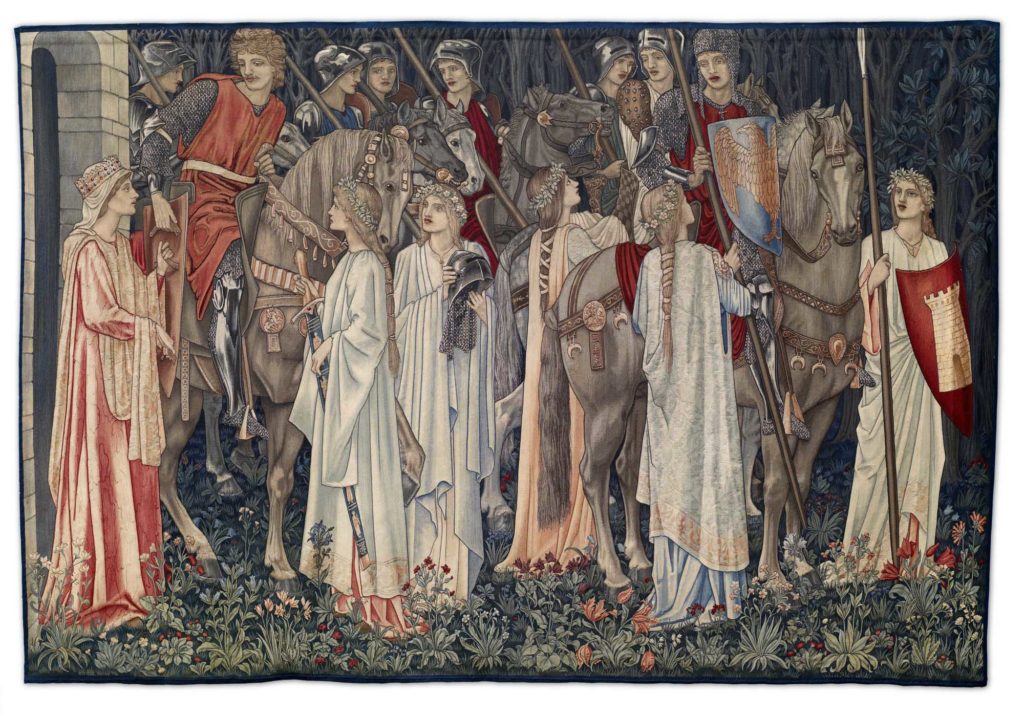 Sir Edward Burne-Jones, the second-generation Pre-Raphaelite, sometimes called the last of the Pre-Raphaelites, is in many ways the quintessential Pre-Raphaelite painter. His love of poetry, medievalism, Arthurian myth and an almost prototype adherence to accepted norms of feminine beauty and bourgeois Victorian sexuality mark him out as the perfect adherent to the tenets of the Pre-Raphaelite Brotherhood.

But as well as a painter of vast escapist canvasses he was also a designer of textiles and stained glass and, as a close friend of William Morris, a partner at Morris & Co whose portfolio famously embraced carving, stained-glass, tiles, paper-hangings and even carpets and lino.

He was also a Brummie, and one of the best collections to take in the breadth of his artistic interest can be found in the Birmingham Museum and Art Gallery (BMAG) collection, much of which can be enjoyed via their excellent Online Image Bank.

Birmingham Museums Trust lays claim to holding the most important collection of Pre-Raphaelite art anywhere in the world, with over 3000 paintings, drawings, prints and examples of decorative art and design. But as well as a being a go-to place for classic Victorian art the city is also the birthplace of Burne-Jones and BMAG also has the largest public collection of his work. 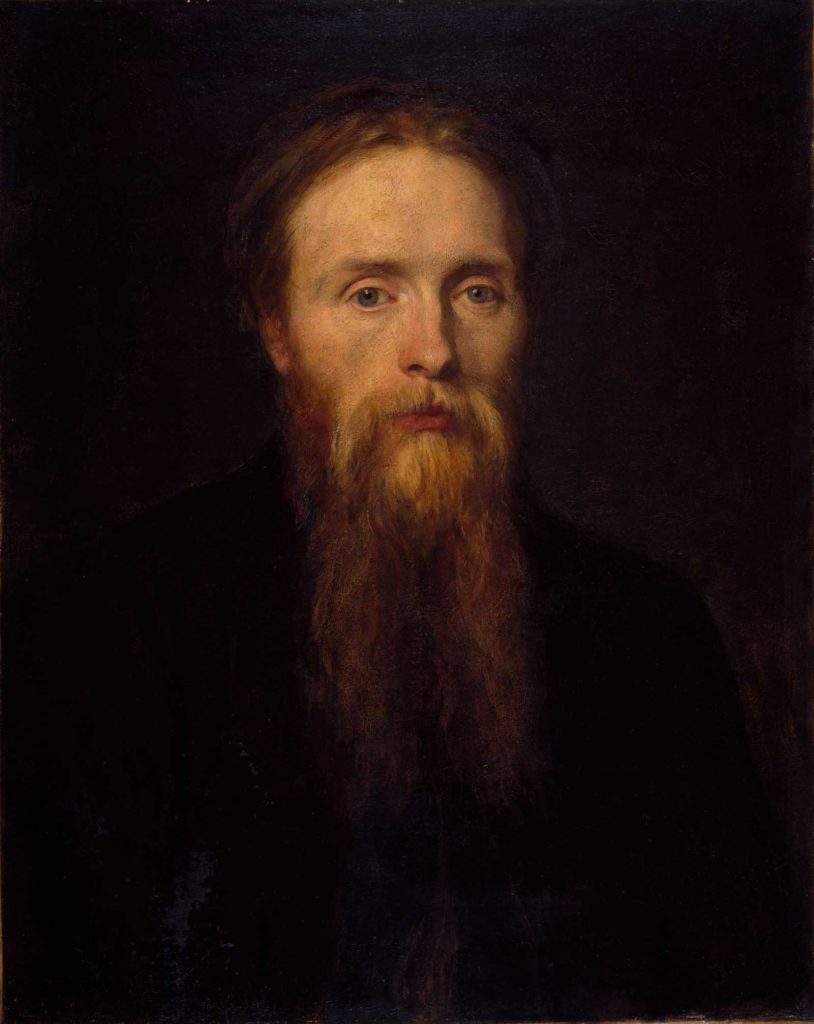 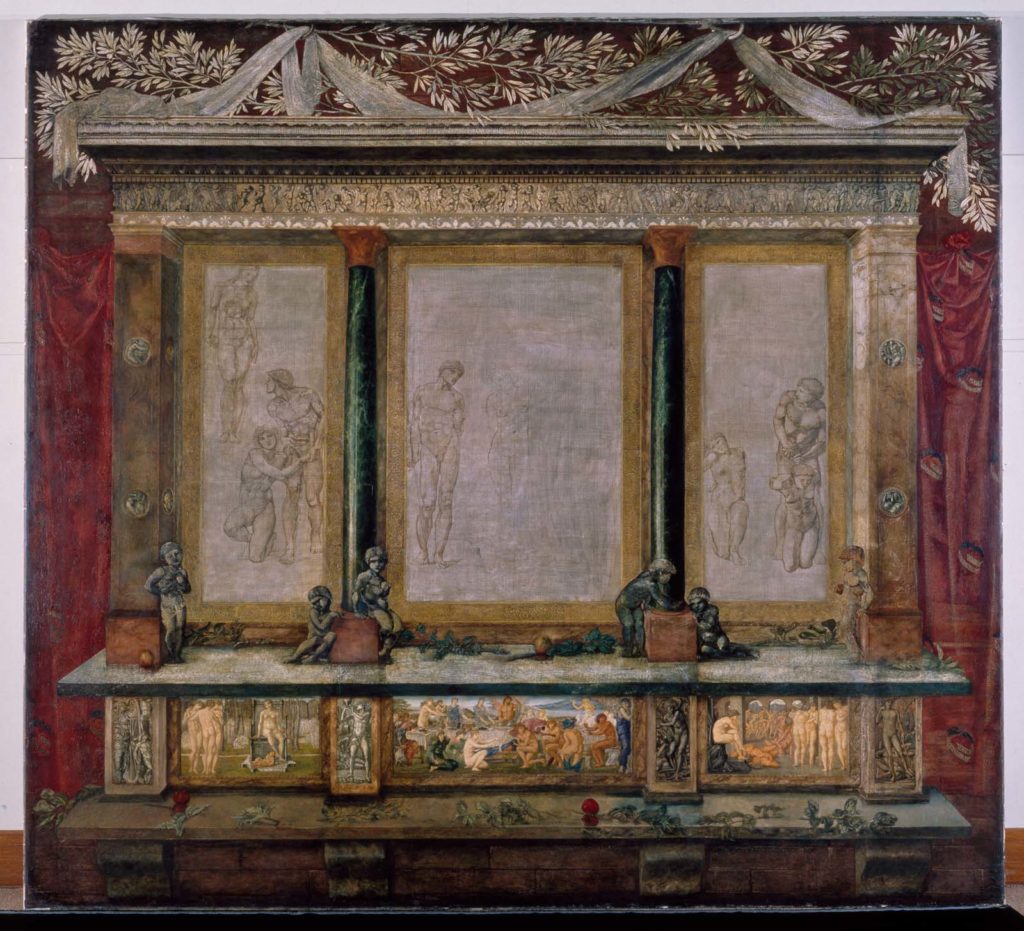 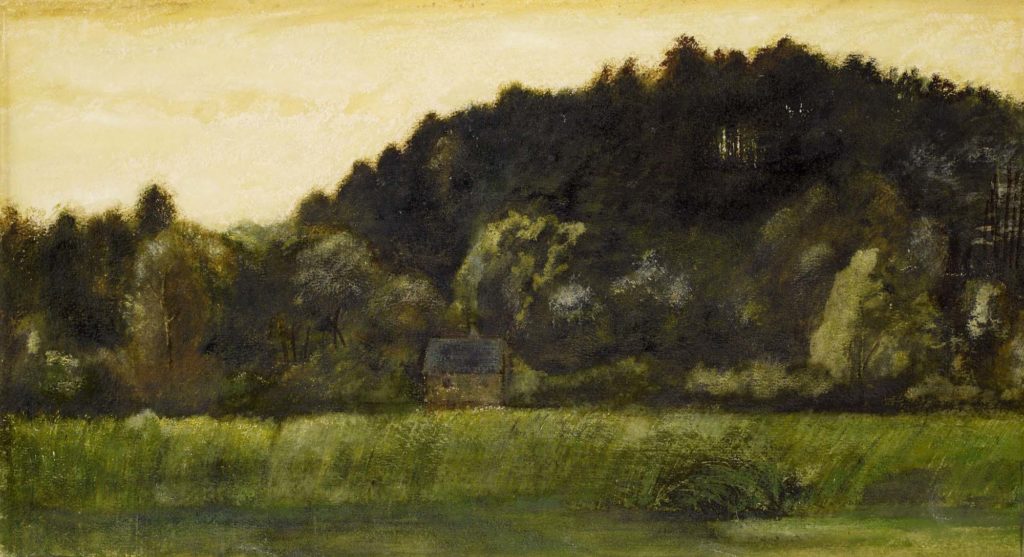 The son of Welsh frame maker, Edward Richard Jones, who lived in Bennetts Hill in the city centre (a blue plaque commemorates the site of the painter’s childhood home), Burne-Jones’s mother, Elizabeth Coley Jones, died six days after his birth in August 1833 and he was raised by his father and a housekeeper. Interestingly he added the ‘Burne’ to his surname in the 1860s, and a hyphen after his knighthood in 1894.

Most biographies cite an unhappy childhood, which saw the young Edward Jones turn to drawing for solace and he later attended drawing classes at the Government School of Design in Birmingham in 1848.

His alma mater was Birmingham’s King Edward VI grammar school from 1844 and the Birmingham School of Art from 1848 to 1852, before studying theology at Exeter College, Oxford. It was here that he met William Morris and where the pair fell under the beguiling spell of Pre-Raphaelitism, which caused them both to abandon any intention of taking Holy Orders for a life of art.

Burne-Jones’s life as an artist may have taken him physically away from the church and the West Midlands but the links remained strong. He was Honorary President of the Royal Birmingham Society of Artists and in 1887 he started work on the largest watercolour of the 19th century, ‘The Star of Bethlehem’, which he completed in 1890 as a commission for the corporation of Birmingham for the City’s new Museum and Art Gallery.

His love of stained glass is also manifest in the city of his birth where he became a key advocate of its revival. His works include windows in St. Philip’s Cathedral and St Martin in the Bull Ring, and there are several examples of his designs later manufactured by the firm of William Morris & Co in the collection at Birmingham. 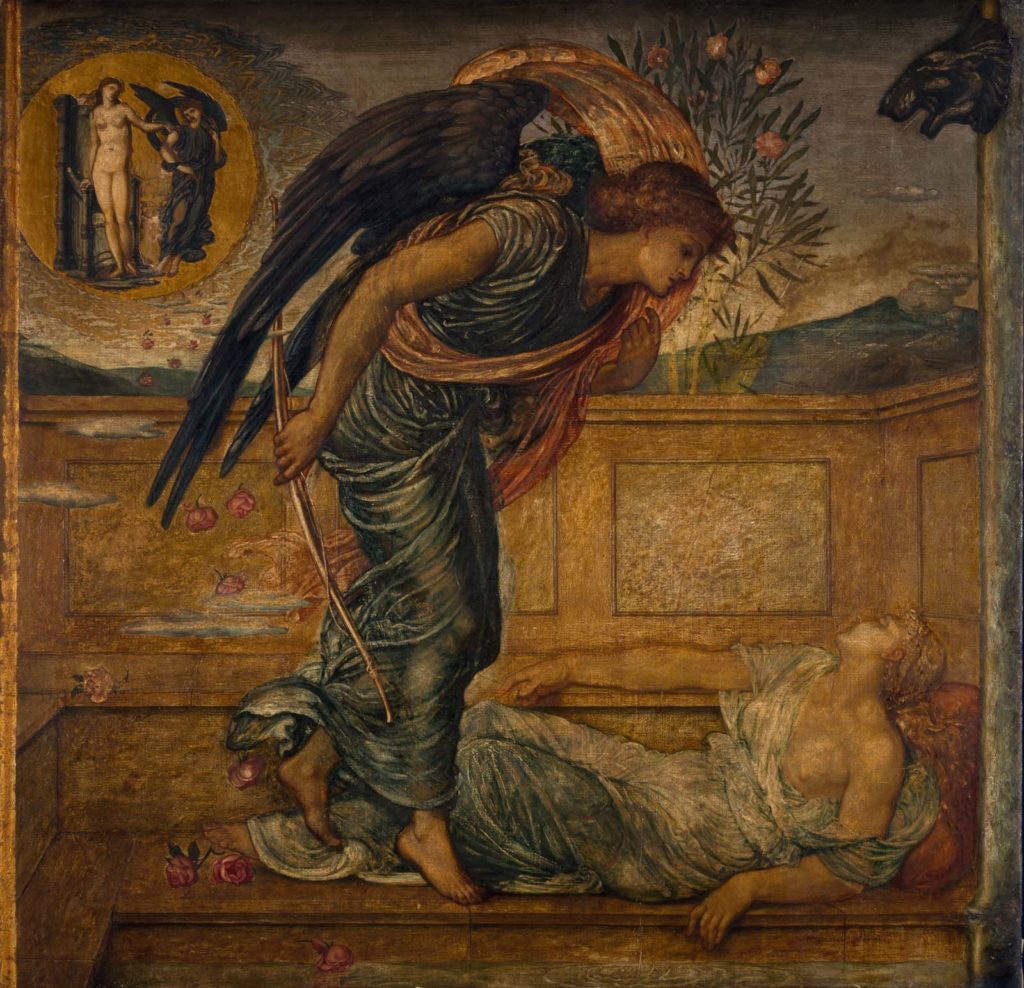 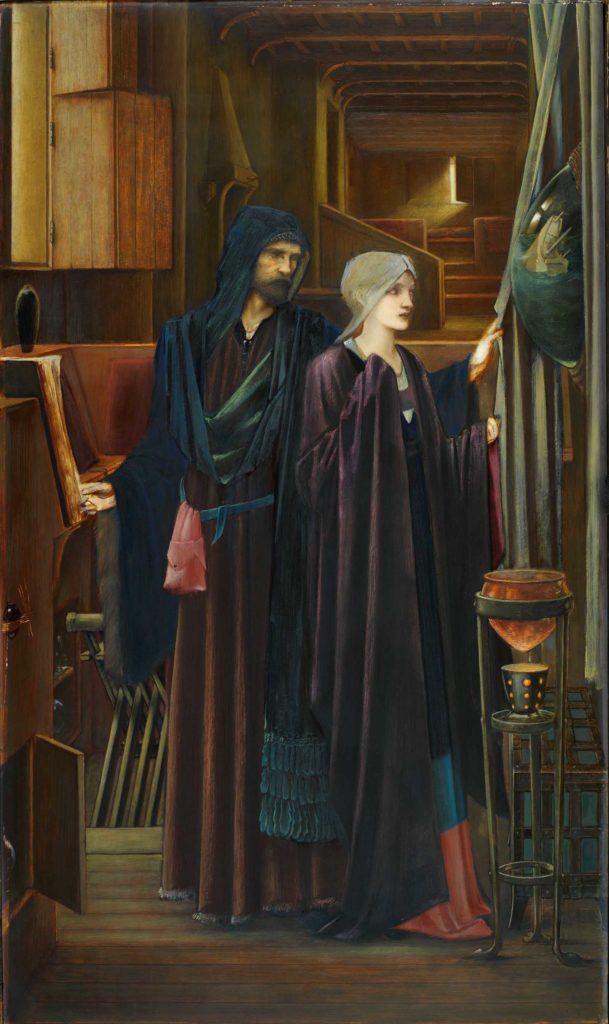 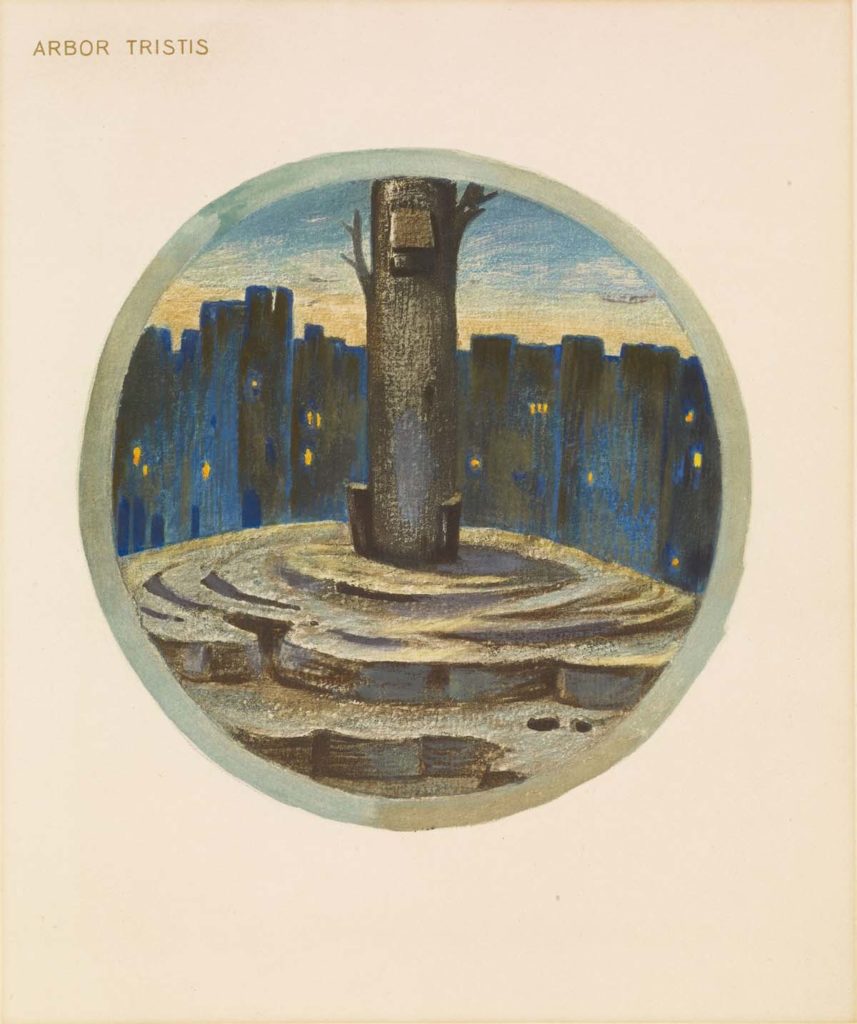 Among them is the fine stained-glass panel, St Mark the Evangelist, which was executed for the Foreign Fair Exhibition, Boston, Massachusetts in 1883 by Morris & Co together with a cartoon and a study for the same design.

Some surprising artworks, which are departures from the Burne-Jones aesthetic, can be found in BMAG’s collection of pages from Burne-Jones’s Flower Book which contains an uncharacteristically modern-looking watercolour painting of a forlorn tree, and the intriguing Landscape – Study, which seems more Impressionistic than it does late Victorian Aesthetic.

More familiar territory comes courtesy of his designs for the Troy Triptych, an unfinished painting representing the history of the Fall of Troy, and the studies for the Palace Green Murals which were based on ‘The Story of Cupid and Psyche’ from William Morris’s epic poem, ‘The Earthly Paradise’. The mural was commissioned by George Howard (later the 9th Earl of Carlisle) in the late 1860s for his newly-built home in No 1 Palace Green, Kensington.

Burne-Jones loved drawing caricatures and he famously drew several of them to satirise both fellow Pre-Raphaelite Dante Gabriel Rossetti and William Morris who he depicted, often cruelly, as a rotund clown. But as the Birmingham collection shows, he also used his ‘savage pen’ to depict himself as the sallow artist surrounded by his canvasses.

Other drawings include studies for many of his famous works of art and some oddities like Goblin Wrestler, which according to BMAG was the kind of thing he liked to produce “many times” from his early childhood. He did not begin creating these images on a larger scale until the mid-to-late 1860s, after he had children.

But these are just a few of the treasures to be found online in this rich and quite astonishing collection that reveals the many sides of Birmingham’s very own Edward Burne-Jones. 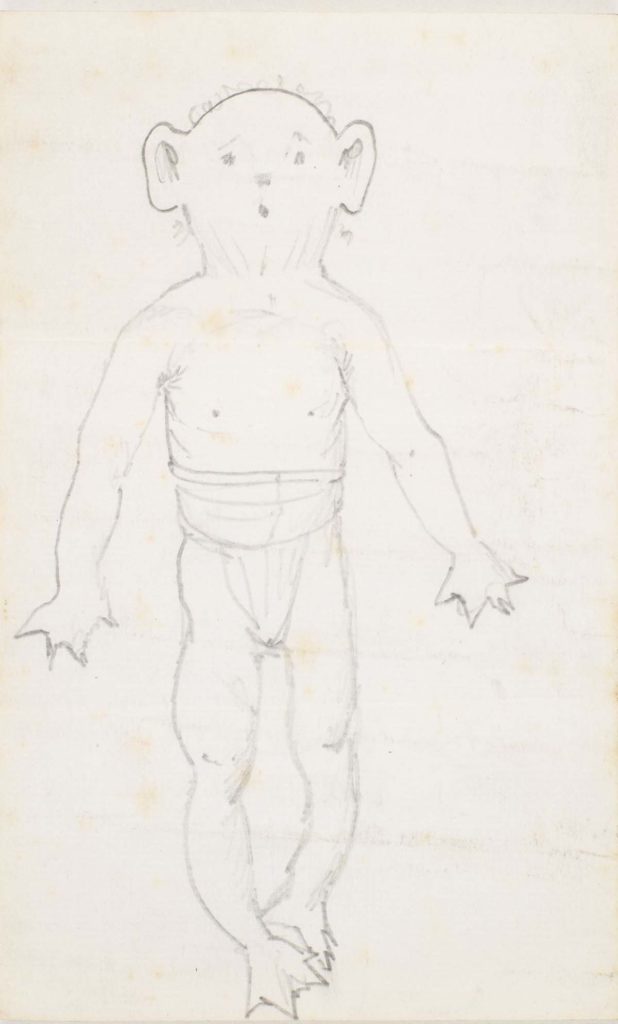 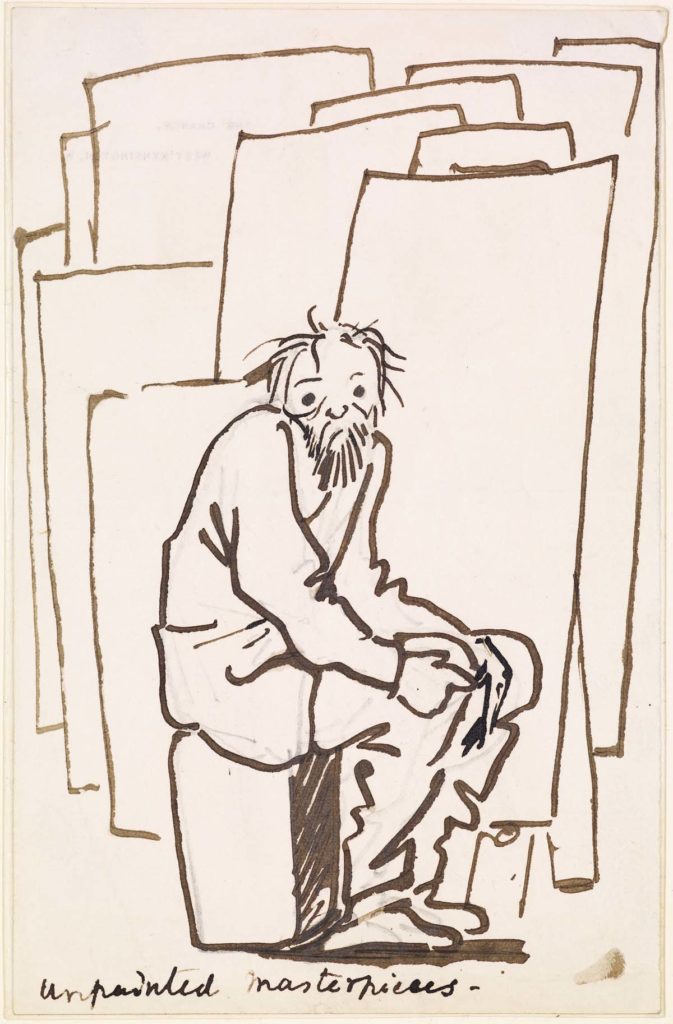 Explore the full collection of Burne-Jones artworks on the Birmingham Museums Image Bank or browse the whole collection at dams.birminghammuseums.org.uk/asset-bank/