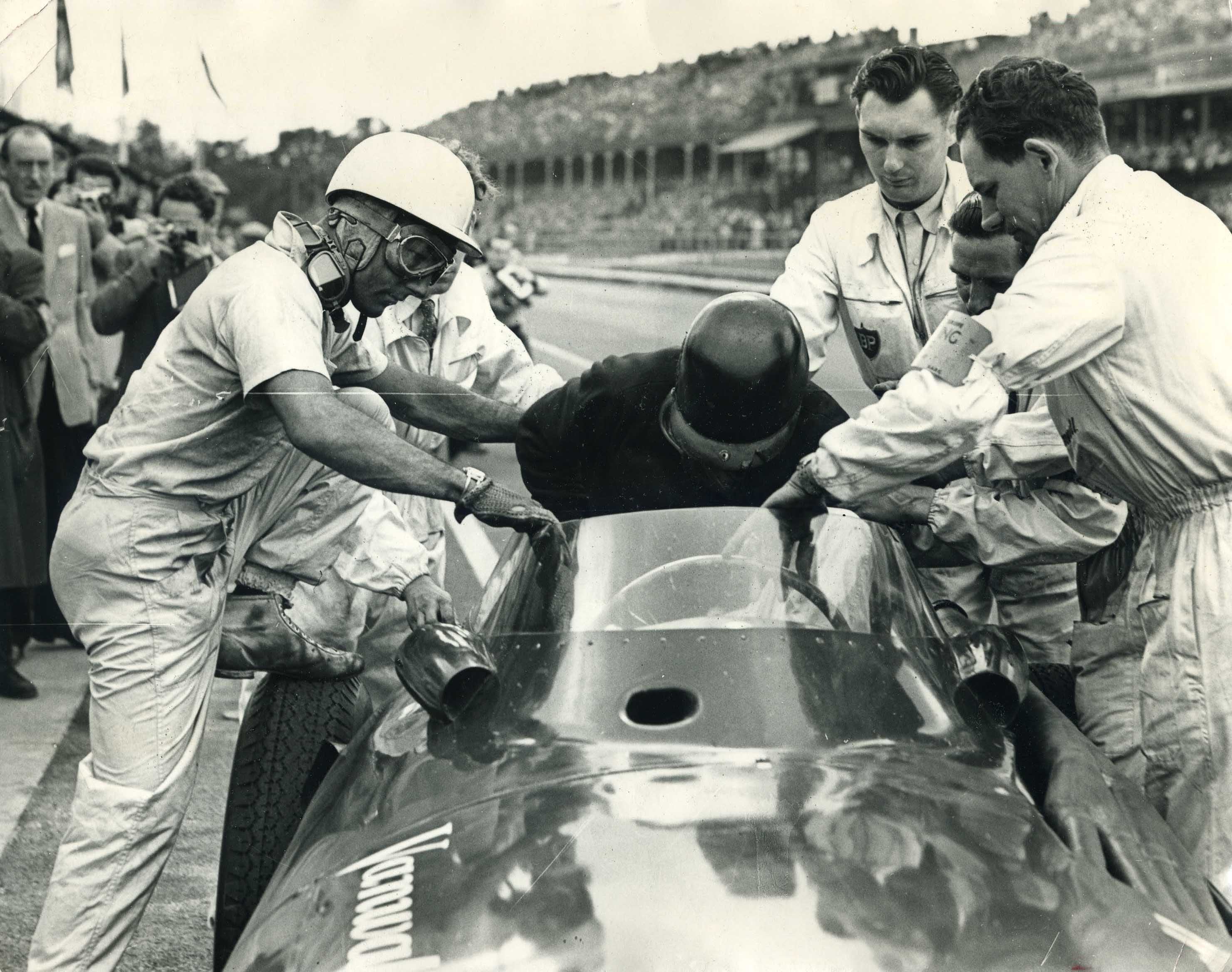 Stirling Moss, who was leading when his Vanwall car broke down, takes over the No. 2 car from Tony Brookes at the 1957 Grand Prix at Aintree. Resuming in ninth position, Moss went on to win, the first British driver in a British car to win a major Grand Prix since the 1920s. Courtesy The Atkinson.

Over 150,000 people are estimated to have been spectators at Aintree for the 1957 British Grand Prix to cheer on the British Vanwall team who were taking on the power of Lancia-Ferrari and Maserati.

Spearheading British hopes was Stirling Moss, the Vanwall team’s guest driver who together with Tony Brooks shared driving duties. ‘The Boy’ as Moss was affectionately known, had already warmed up for the race by winning the 1956 International Trophy at Silverstone in a Vanwall and he made pole position for his tilt at the British Grand Prix.

But not all went to plan. On lap 27 he had car failure and Brooks, who was still bandaged from a crash at Le Mans, had to hand his sister car over to Moss – who re-joined the race and won it for the pair. Brooks had completed 26 and Moss 64 laps to share the eight points for first place. 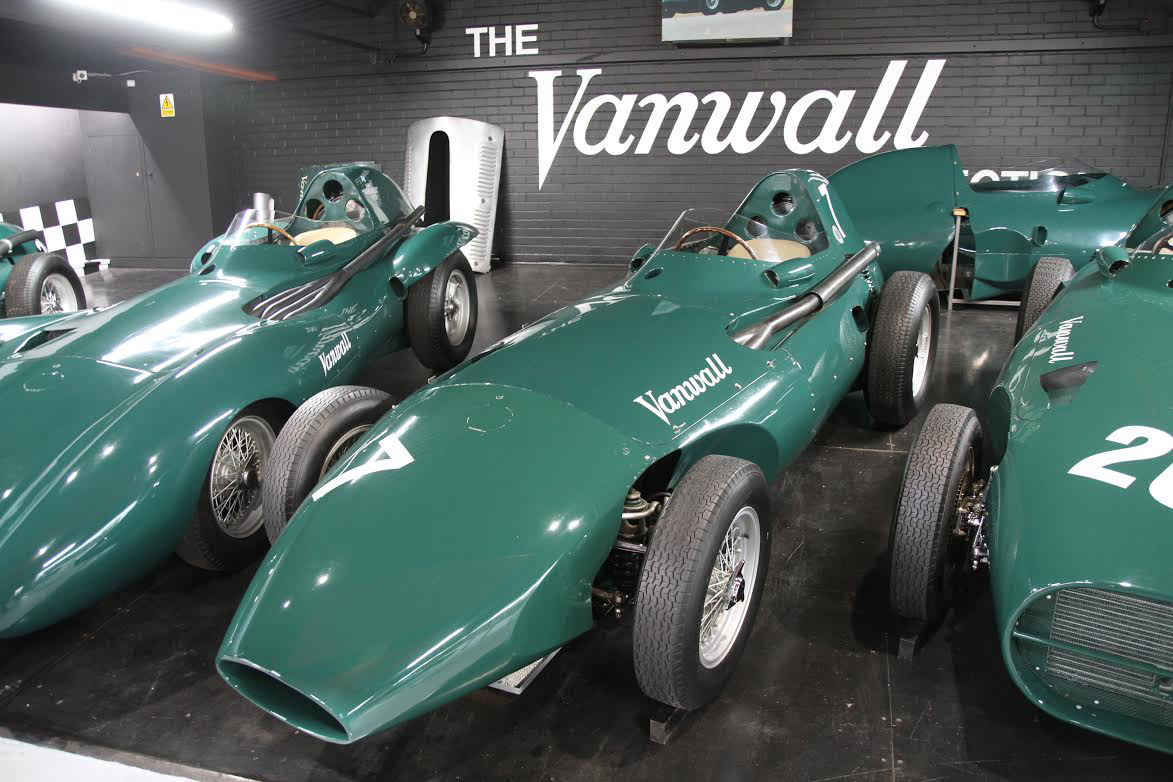 It was the first World Championship win for a British car and Moss and Brooks were the first British drivers to win the British Grand Prix in a British Car. It was also the last time that a Grand Prix was won by two drivers in a shared car.

Grand Prix fans are invited to relive this momentous event of firsts and lasts in British Grand Prix history by marking the 60th anniversary of the famous win at Aintree with the Vanwall Grand Prix car, which arrives at the Atkinson on loan from Donington Museum. The museum in Southport is just a short drive up the coast from the famous Aintree race course where the old Grand Prix race track still sits within the more famous Grand National horse racing course.

Today the Vanwall name may not be remembered beyond the world of the motor racing aficionado, but with its iconic ‘teardrop’ design the Vanwall was the last hurrah of the soon-to-be obsolete front engine Grand Prix cars.

It took its name from an amalgamation of the name of British billionaire industrialist, Anthony ‘Tony’ Vandervell and Thinwall, Vandervell’s bearing company. The first Vanwall Special was built for the new Formula 1 regulations of 1954 with an engine designed by Norton engineer Leo Kuzmicki consisting of four 500 cc Norton engines combined into one 2-litre unit. 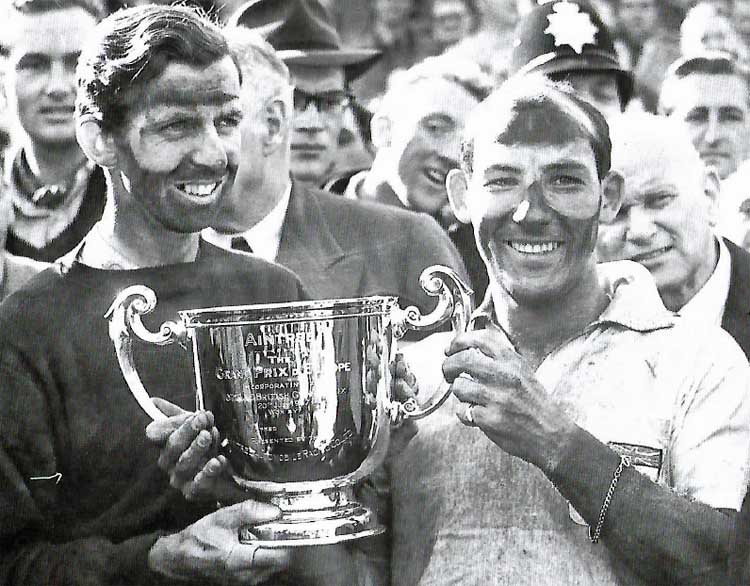 Moss and Brooks celebrate the 1957 British Grand Prix together. Courtesy The Atkinson.

At the end of 1955, Vandervell commissioned a young aircraft engineer, Frank Costin, to design a new sleek, aerodynamic body shape for the Vanwall, and Colin Chapman of Lotus to design the chassis, all of which led to the success at Aintree in 1957. Later that year Moss went on to win both the Italian and Pescara Grand Prix.

The following year saw the Vanwall team win six out of eleven formula one races, with Moss and Brooks sharing three each. But the season was marred by the death of the team’s third driver Stuart Lewis-Evans, after he sustained serious burns in an accident caused by the seizure of his engine during the Moroccan Grand Prix.

Tony Vandervell never fully recovered from Lewis-Evans’s death and withdrew from motor sport at the end of 1958. By the end of 1961 the name Vanwall had disappeared from motor racing, but it is said the car’s short-lived success paved the way for other British constructors to challenge and beat the best of the continental powers.

The Vanwall historic motor racing car will take pride of place in The Atkinson foyer for 2 weeks from July 7 – 17.

The Atkinson is Southport’s beautiful home for music, theatre, art, poetry, literature and history, right in the middle of Lord Street in Southport. Significant investment has been made in refurbishing the stunning 19th century buildings, to create a really welcoming multi art-form venue with a strong contemporary feel.