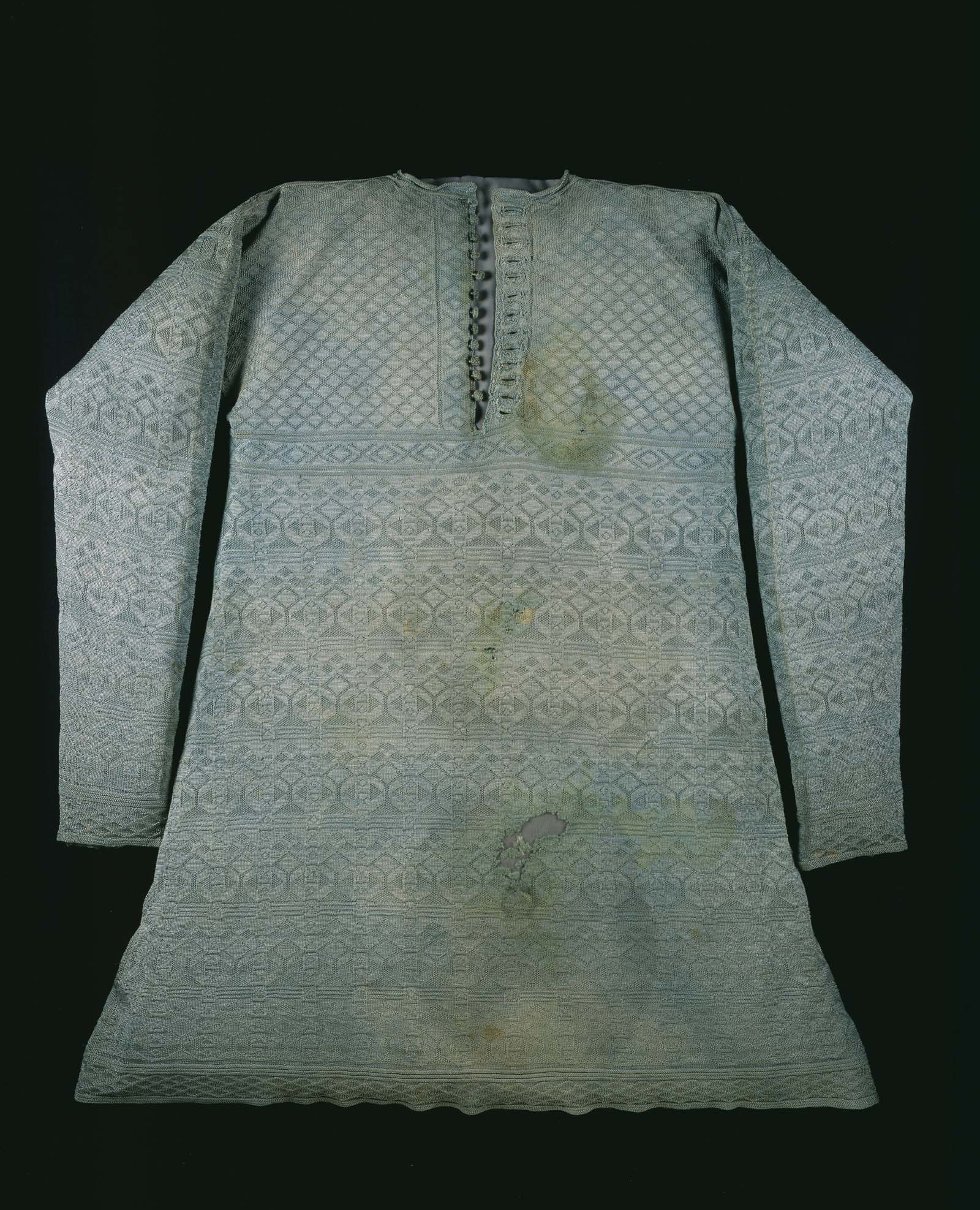 The vest said to have been worn by Charles I at his execution on 30 January 1649. © Museum of London

It is one of the rarest and most intriguing objects of the Museum of London’s seven million object strong London Collection; the pale blue silk vest said to have been worn by King Charles I at his execution which took place on January 30, 1649.

Stains on the front are believed to be blood, and although forensic tests in the 1950s and 1980s failed to prove this conclusively, the potent relic of the bloody demise of Charles I remains a powerful symbol of the violence that ruptured England in the 17th century.

King Charles I was found guilty of treason and subsequently beheaded outside the Banqueting House in Whitehall, London on 30 January 1649 in one of London’s most high-profile public executions.

Following the monarch’s decapitation, his body was undressed and items of his clothing were distributed to people in attendance. When the vest was presented to the Museum of London (then the London Museum) for acquisition in 1925 it came attached with a note of authentication that stated the vest was worn by King Charles I on the day he was beheaded and it was given to the physician who attended him. 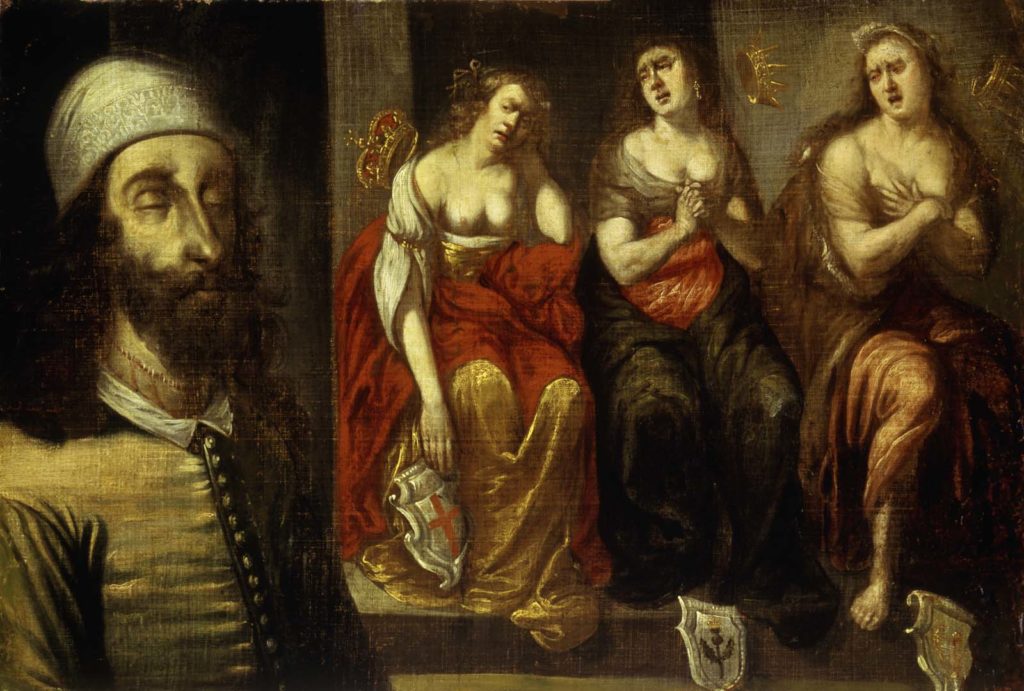 17th-century painting of Charles I after his execution. He is depicted with his head reattached to his body with stitches. © Museum of London 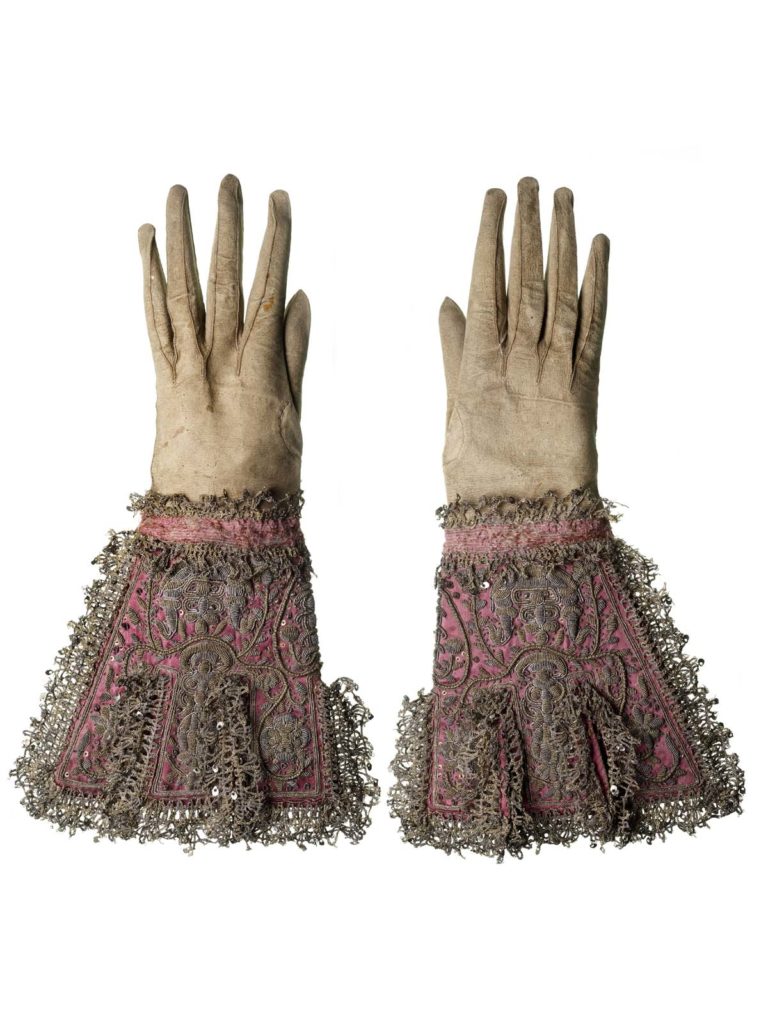 Pair of gloves made of kid leather, fitted with deep gauntlet cuffs of pink silk, trimmed with gold and silver lace and embroidery. Said to have been worn by Charles I at his execution. © Museum of London 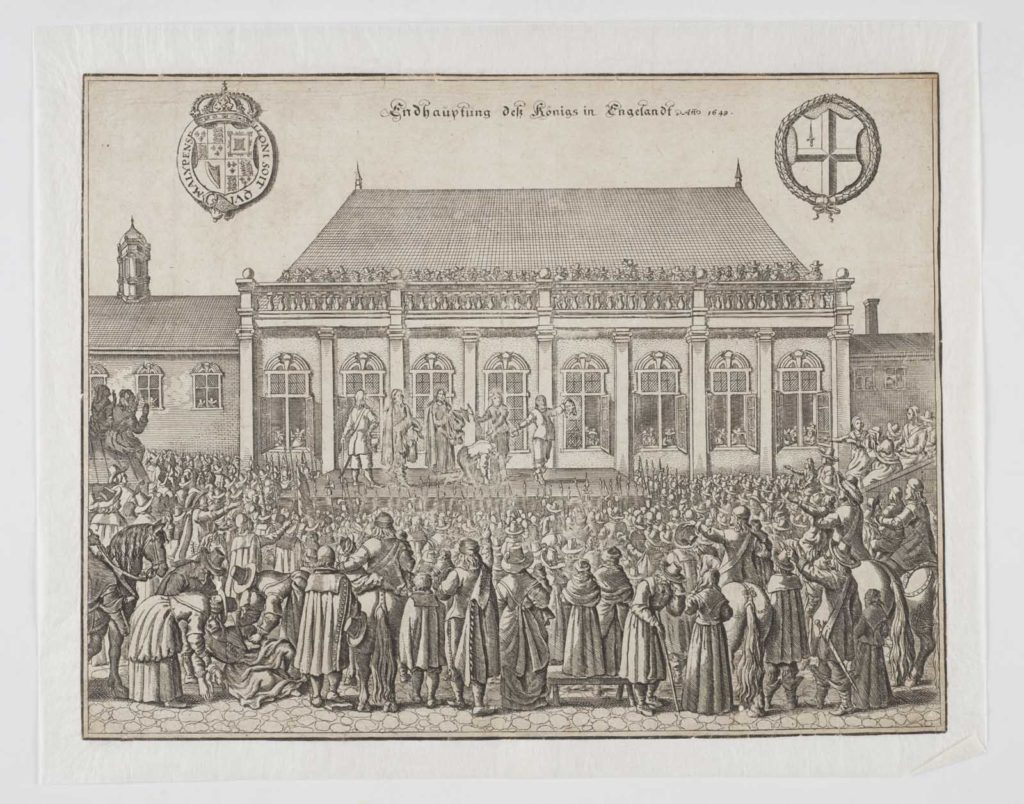 Endhauptung des Königs in Engelandt (Decapitation of the King in England). German engraving showing Charles I’s execution at the Banqueting House at Whitehall, 1649. © Museum of London

The vest is knitted of fine, high-quality, pale blue-green silk with visible stains on its front. They ‘fluoresce’ under UV light like body fluids but could be sweat, vomit or another substance.

The grisly memento is going on display as part of a major exhibition, Executions, opening October 2020 at the Museum exploring the phenomenon of public execution in London’s history. The exhibition will explore the stories, objects and legacies of those that lived, died and witnessed the events first hand from 1196 to 1868.

“Being able to include this incredibly rare vest in a major exhibition is exciting as it is key in telling the story of one of the most infamous executions that occurred in the capital,” says Meriel Jeater, Curator at the Museum of London.

“Public executions became embedded in the landscape and culture of London”

“However, it’s important to remember that public executions were not reserved only for the distinguished, but that thousands of ordinary Londoners were sentenced to death for many types of crime, from the most serious offences to those that we would consider minor today.

“The exhibition covers nearly 700 years, a time when public executions were more frequent in London than any other town, attracting huge crowds several times a year at locations across the capital.

“Public executions became embedded in the landscape and culture of London, influencing people’s everyday lives. Hints of this uncomfortable past can still be seen in the city’s streets today and Executions will allow visitors to explore this grim but fascinating aspect of London’s history through a major exhibition for the first time.”

For now the museum has released details of the other objects related to Charles I’s execution and it’s an impressive little haul of historical relics. 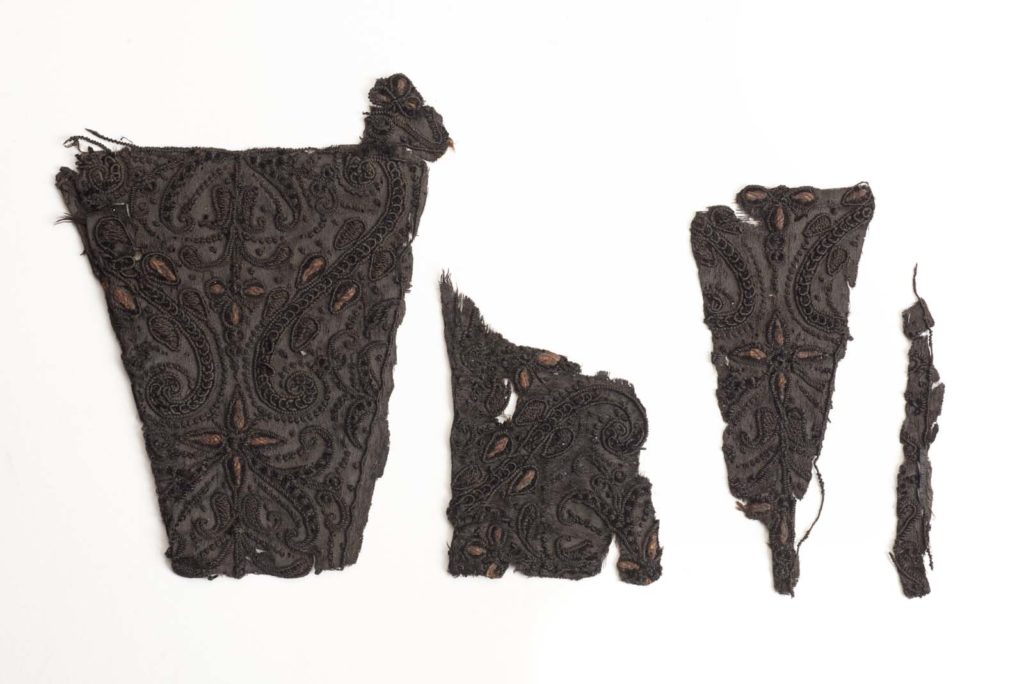 Four fragments of a cloak, said to have been worn by Charles I at his execution. © Museum of London 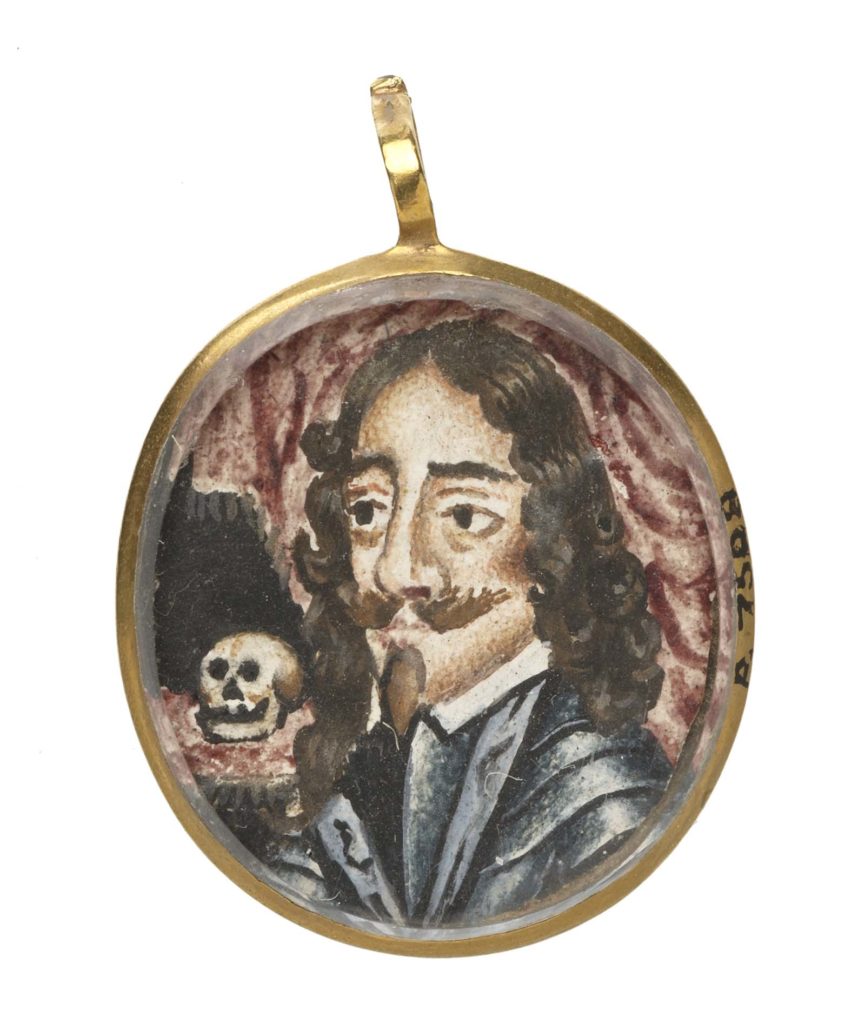 Miniature portrait of Charles I in armour in an oval gold pendant. A memento of Charles I produced for his supporters after his execution. © Museum of London 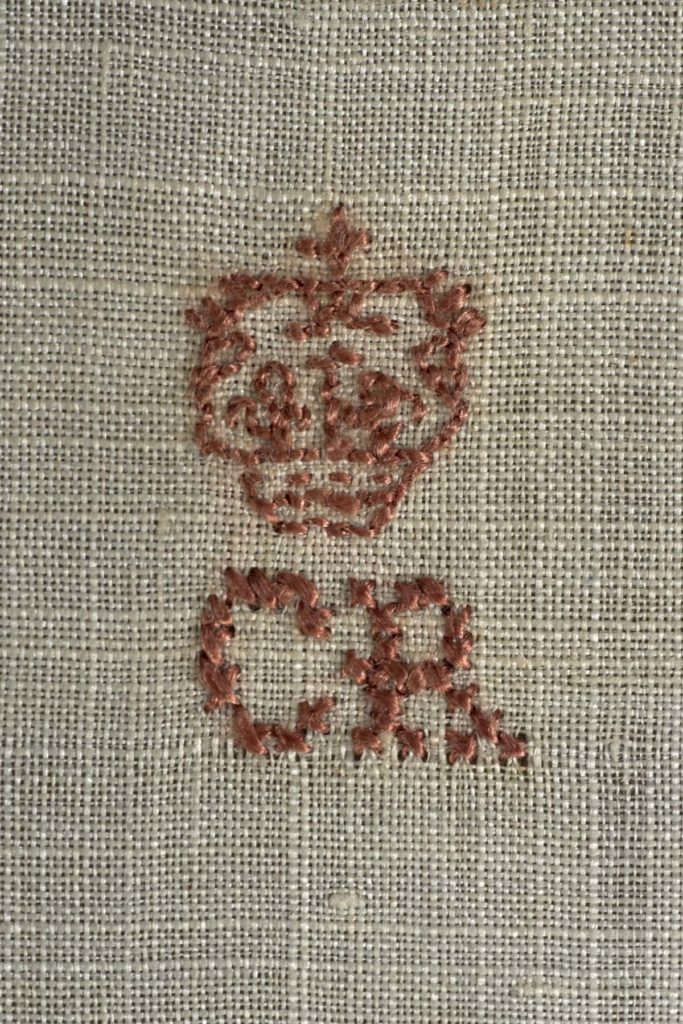 Embroidered cross stitch with the letters ‘CR’ surmounted by a crown in one corner of the handkerchief said to have been used by Charles I on the day of his execution. © Museum of London

They include fragile pieces of the coat recorded to have been given by King Charles to his favourite groom and gentleman of the bedchamber, Thomas Herbert (1606-1682), immediately before he passed through the window of the Banqueting Hall on to the scaffold in Whitehall.

Herbert is said to have later given it to his daughter (Mrs Stuart) who gave it to the Countess Johanna Sophia (nee Countess Hohenloe Langenburg) (1673-1743), wife of Frederick Christian of Schaumburg-Lippe (1655-1728).

The countess was for several years in England at the royal courts (according to Wikipedia the court of George II, according to the note George I. Maybe both?) and died at Stadthagen in 1743. The relics have remained in this family until their presentation to the London Museum.

“A portrait shows Charles I with his head stitched on”

Other objects include a miniature portrait of Charles I in armour in an oval gold pendant with a skull on a cushion above his right shoulder. The portrait, protected by glass, is executed in black, brown and dark red pigment on a paper or ivory ground.

Another portrait shows Charles I after his execution with his head stitched on, to the left of a rectangular niche containing three lamenting female figures representing England, Scotland and Ireland.

A Square fine linen handkerchief embroidered in cross stitch with small red cipher ‘CR’ surmounted by the Tudor crown in one corner is also said to have been present at the execution. The fragile Handkerchief is stained and has some deterioration along old fold lines.

Similarly a silver-gilt fabric scarf or sash with a shimmering silver-gilt lace and spangles, and a pair of leather gauntlet gloves offer a glimpse of the finery that attended the king on his final journey. 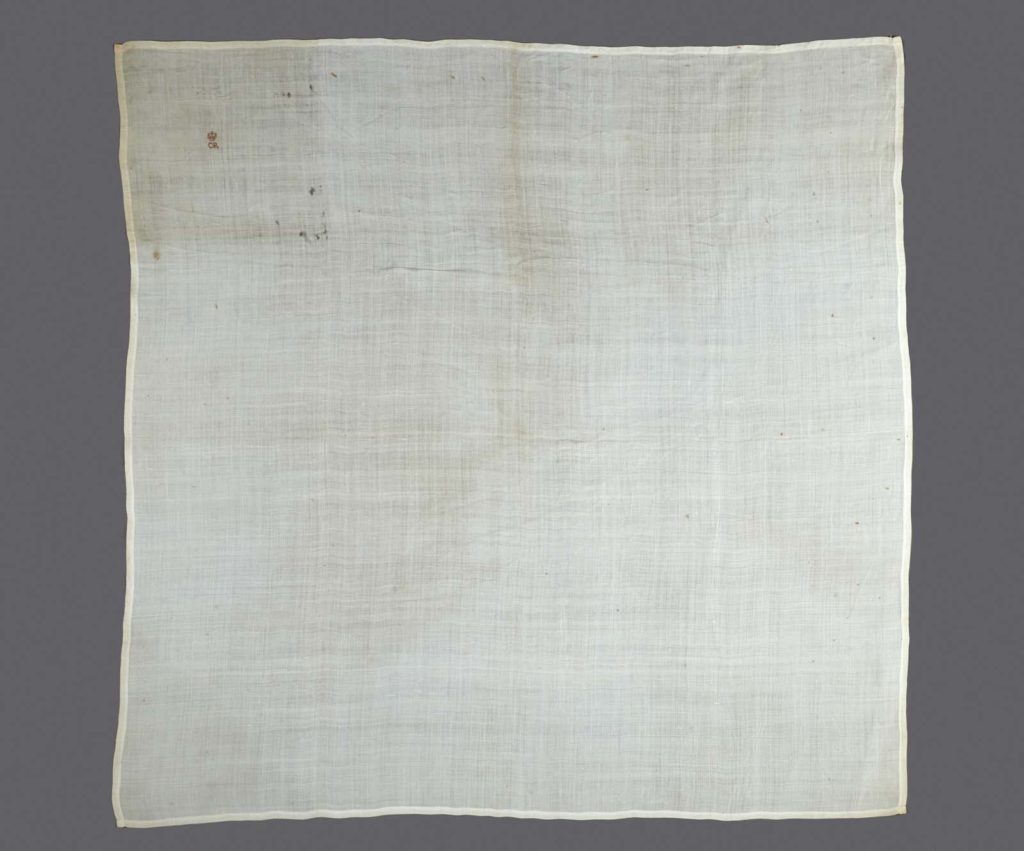 Fine linen handkerchief embroidered in cross stitch with the letters ‘CR’ surmounted by a crown in one corner. Said to have been used by Charles I on the day of his execution. © Museum of London 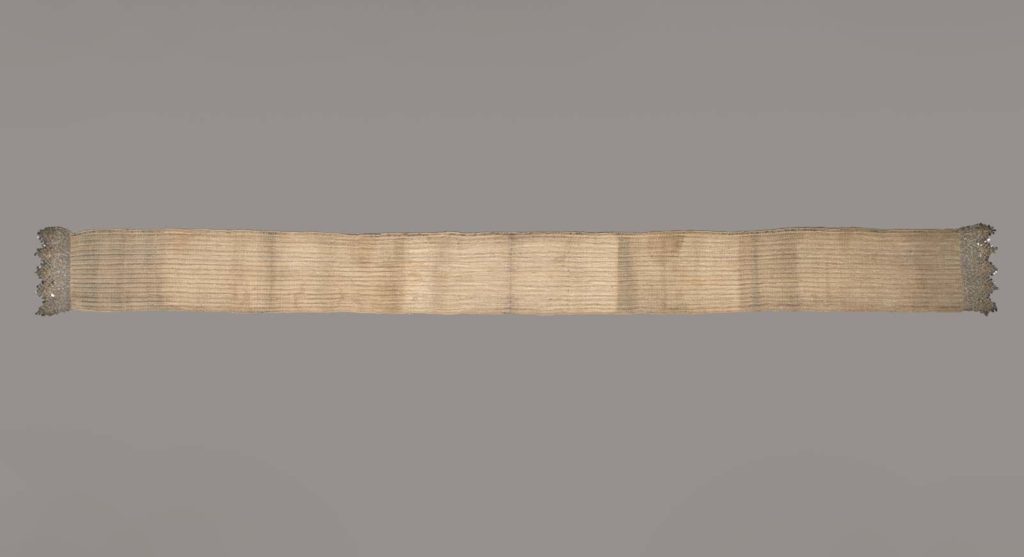 Silver-gilt fabric scarf or sash with silver-gilt lace and spangles. Sash said to have been worn by Charles I at his execution. © Museum of London 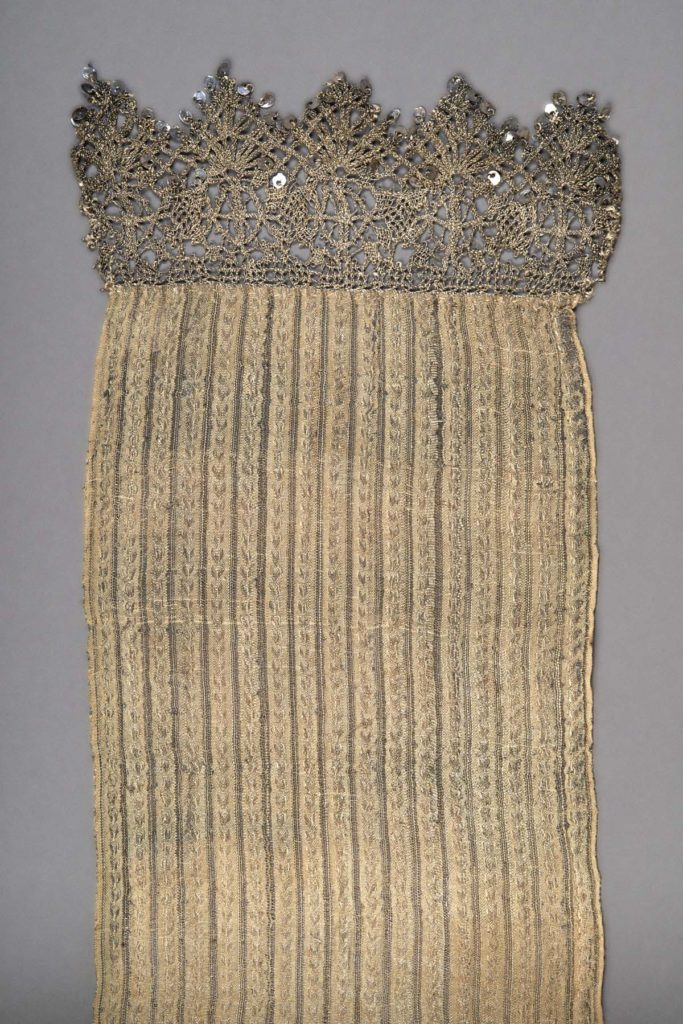 Detail of silver-gilt fabric scarf or sash with silver-gilt lace and spangles. Sash said to have been worn by Charles I at his execution. © Museum of London