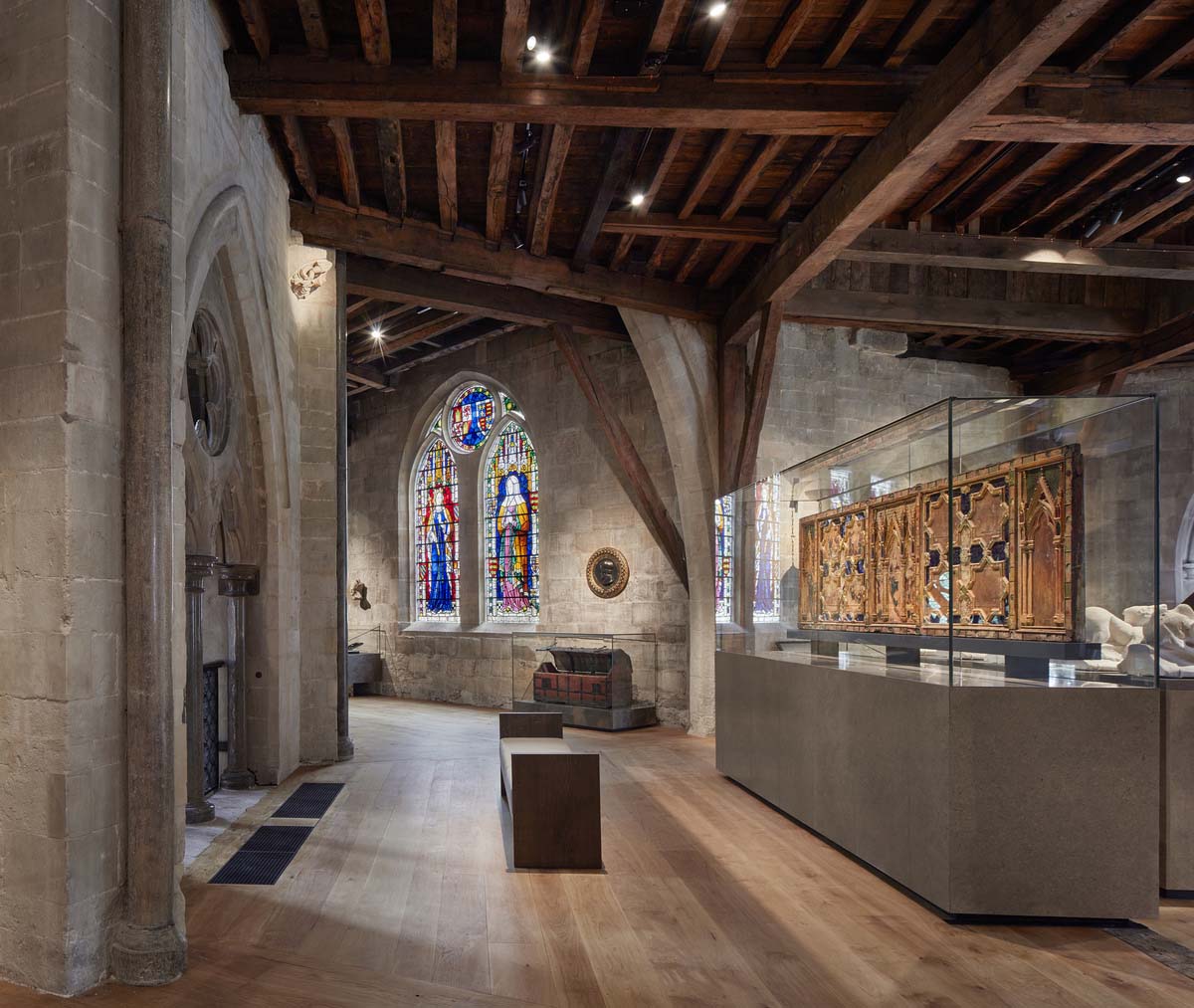 From a medieval guide to staging coronations to England’s oldest surviving altarpiece, Westminster Abbey is home to some remarkable treasures. Now ten artefacts from the Abbey’s thousand-year history have been brought together in a new online guide to Christianity in 10 Objects. Take a look at some of the highlights here: 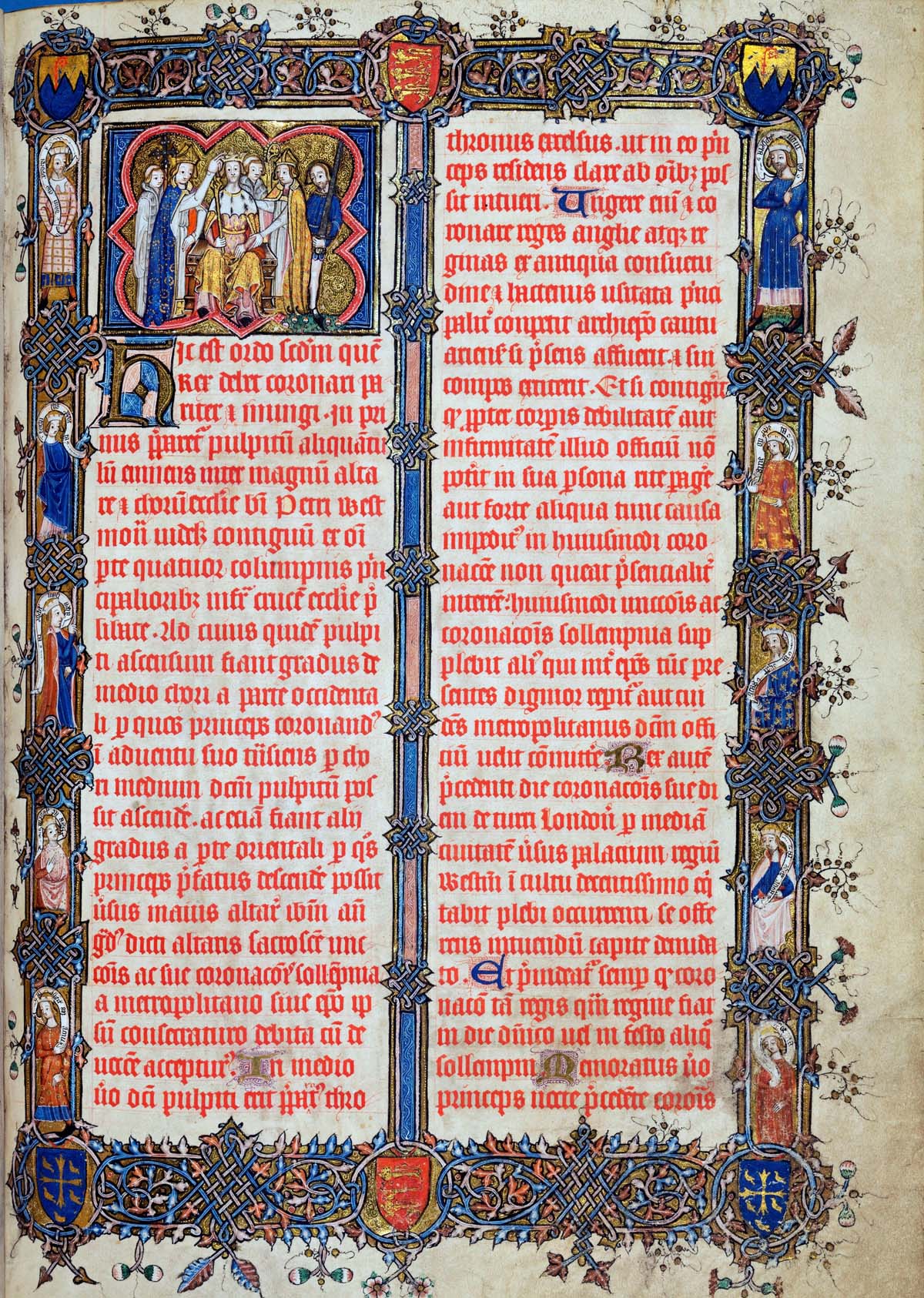 Westminster Abbey has been a place of Christian worship for more than ten centuries. Life at medieval Abbey was shaped by the Rule of St Benedict, which regulated the running of monasteries and the activities of their monks. Daily worship of God was at the heart of monastic life, with services held at fixed points throughout the day and night which gave structure and context to all other activity.

This magnificent Latin manuscript, one of the largest surviving English medieval manuscripts, contains the readings and prayers used at the celebration of the Mass, along with a calendar of festivals and saints’ days. It also includes services particularly associated with the Abbey, such as the coronation order and observances for the feasts of St Edward the Confessor. Its 682 pages are richly decorated with coloured inks and gold leaf.

Nicholas Litlyngton, Abbot of Westminster from 1362 – 86, commissioned the manuscript for use at the High Altar and paid for it from his personal funds. His coat of arms and initials appear at various points in the manuscript to remind the user of his involvement. 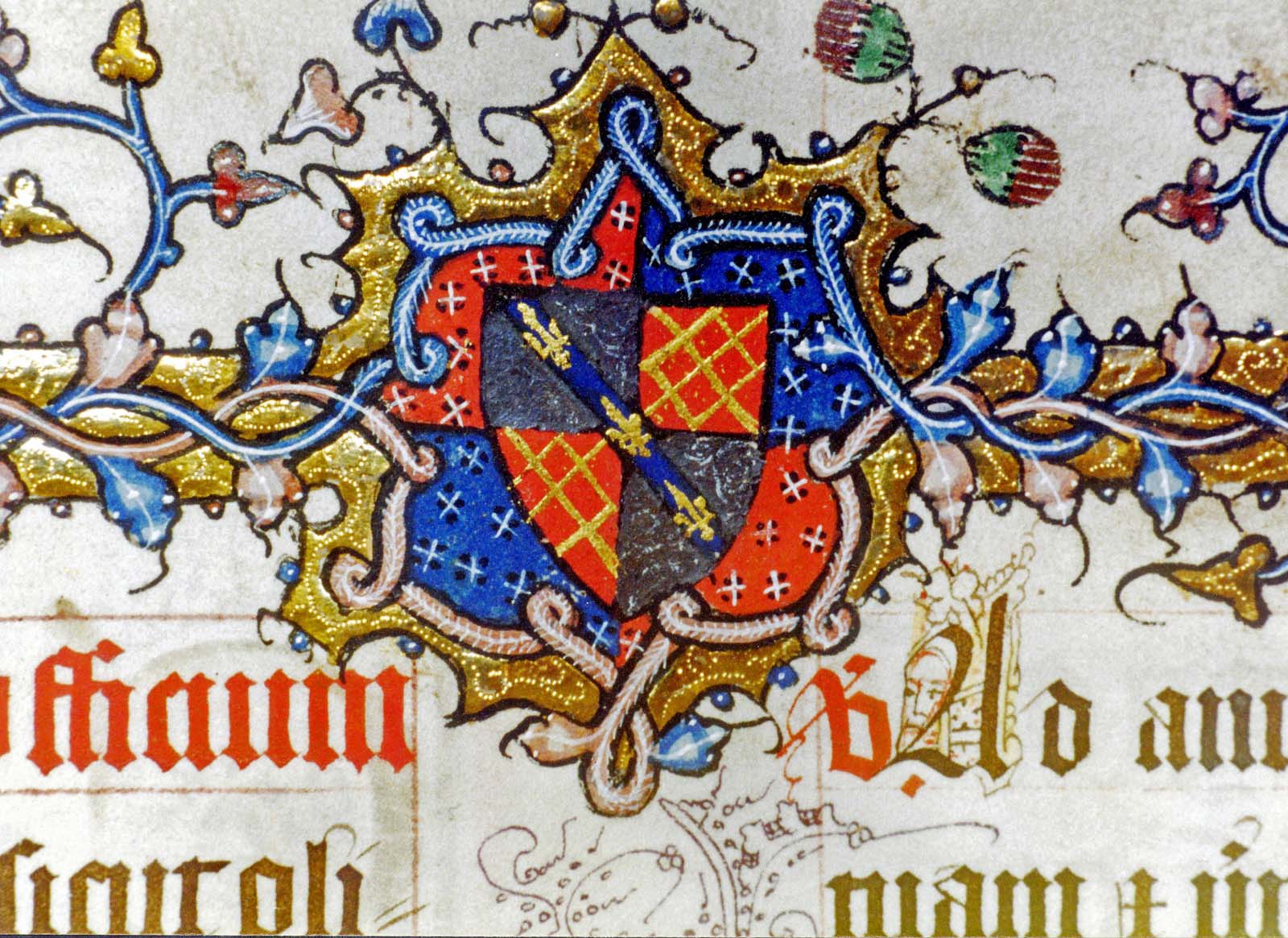 The Abbey’s records show that the manuscript was made between 1383 – 1384 and that four individuals worked on it. A scribe called Thomas Preston laid out the work and wrote the text. Two unknown artists then painted the 62 illuminated initials and the numerous decorative borders. A third artist produced a magnificent crucifixion scene, the only full-page illumination in the missal. 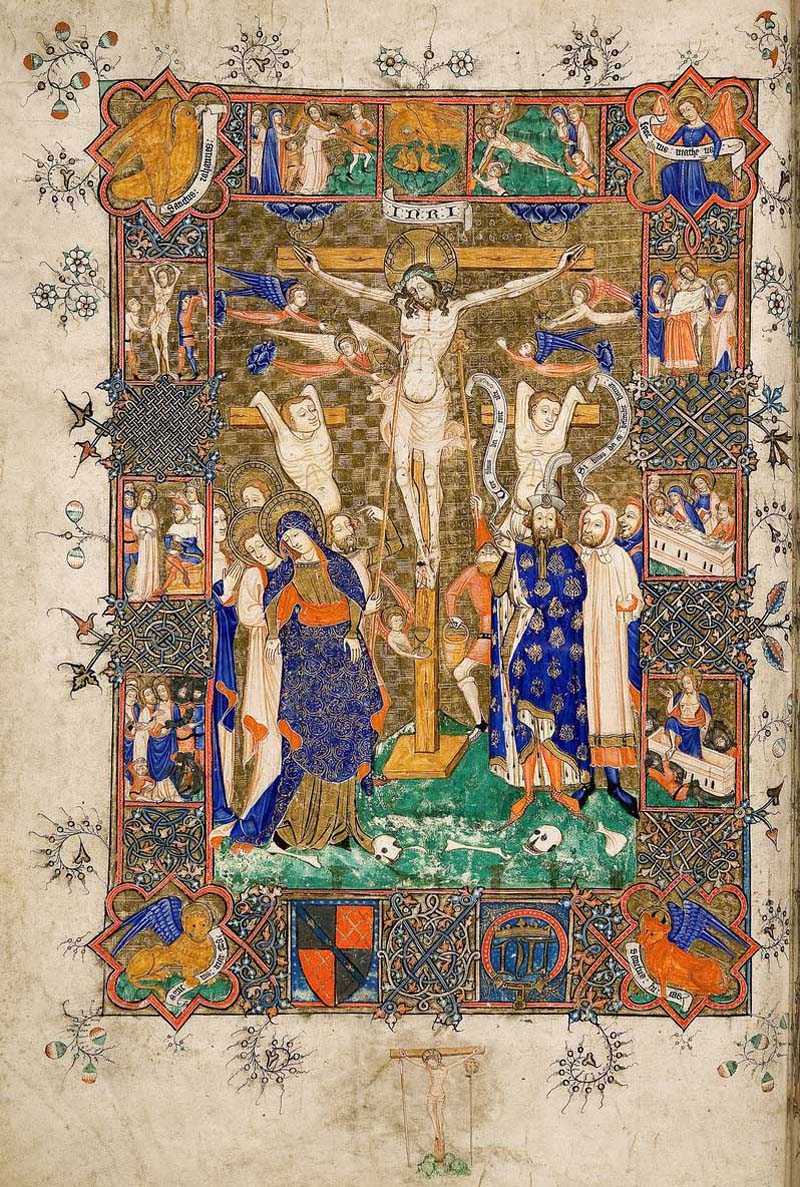 Thomas Preston lived in the monastery while the work was carried out and subsequently joined the Abbey as a monk, but nothing more is known of the other artists. Most of the Abbey’s service books were destroyed at the dissolution of the monastery in 1540 and it is not certain why this one survived, but the need for the Abbey to preserve records of the coronation service may have been a factor. 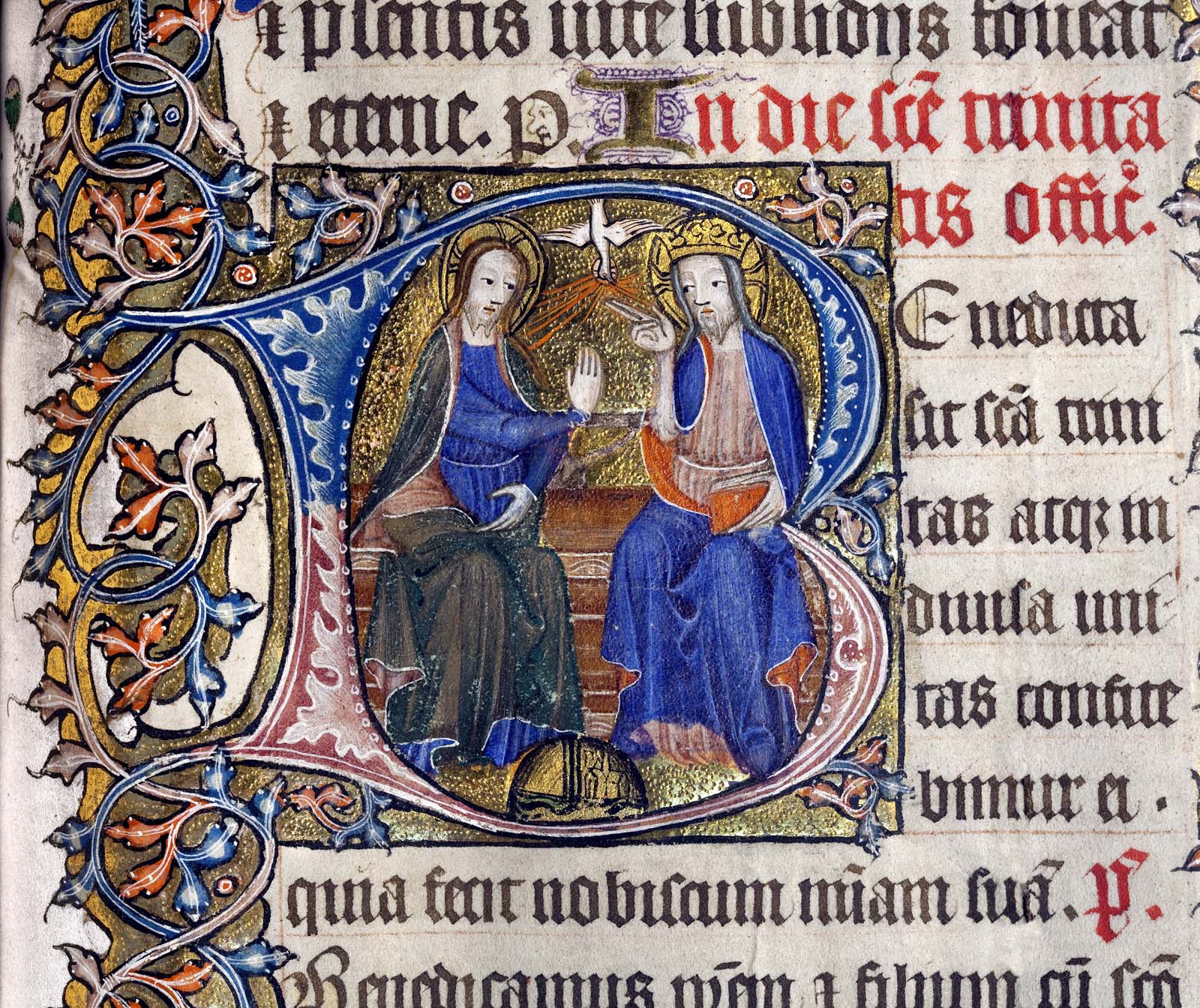 Maquette of the memorial to Lady Elizabeth Nightingale 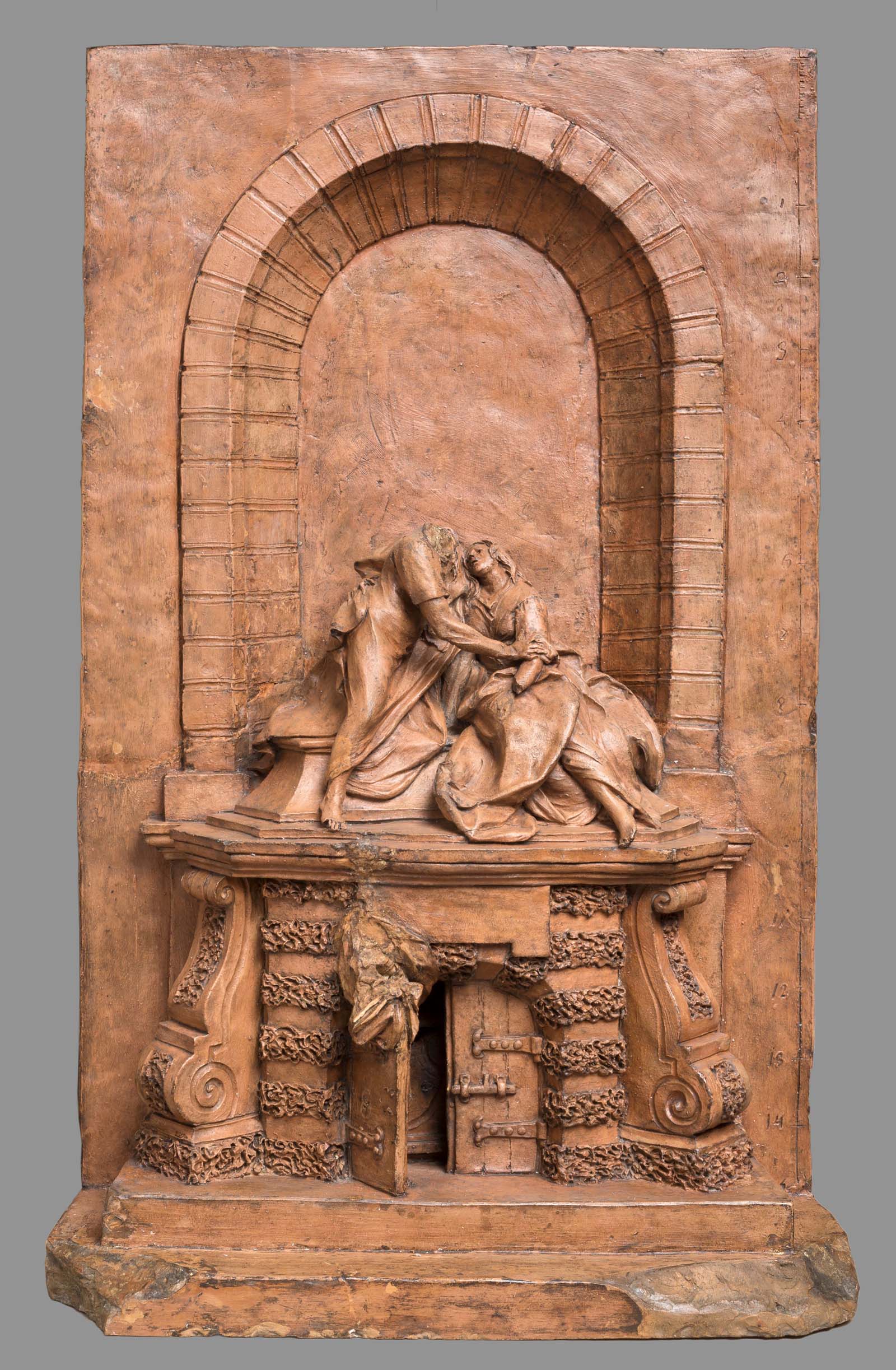 More than 3,000 people are buried or remembered in the Abbey, some with simple gravestones, others with more elaborate memorials. Sculptors often use models – or maquettes – to develop their designs and while their finished work will stand for centuries, very few maquettes for Abbey memorials survive. This one was made by Louis-François Roubiliac in preparation for his memorial to Lady Elizabeth Nightingale – one of the most dramatic in the Abbey.

Lady Elizabeth died in childbirth in 1731 following a premature labour caused by the shock of a violent flash of lightning. Her memorial, commissioned by her son, shows a skeleton of Death emerging from his prison to aim his deadly dart at the dying figure of Elizabeth above. She is held up by her husband Joseph who, in horror, tries in vain to ward off the stroke of death.

One story is that the idea for this image may have come from a dream that Elizabeth’s brother in law, the Earl of Huntingdon, had in which a skeleton appeared at the foot of his bed and crept up under the bedclothes between husband and wife. 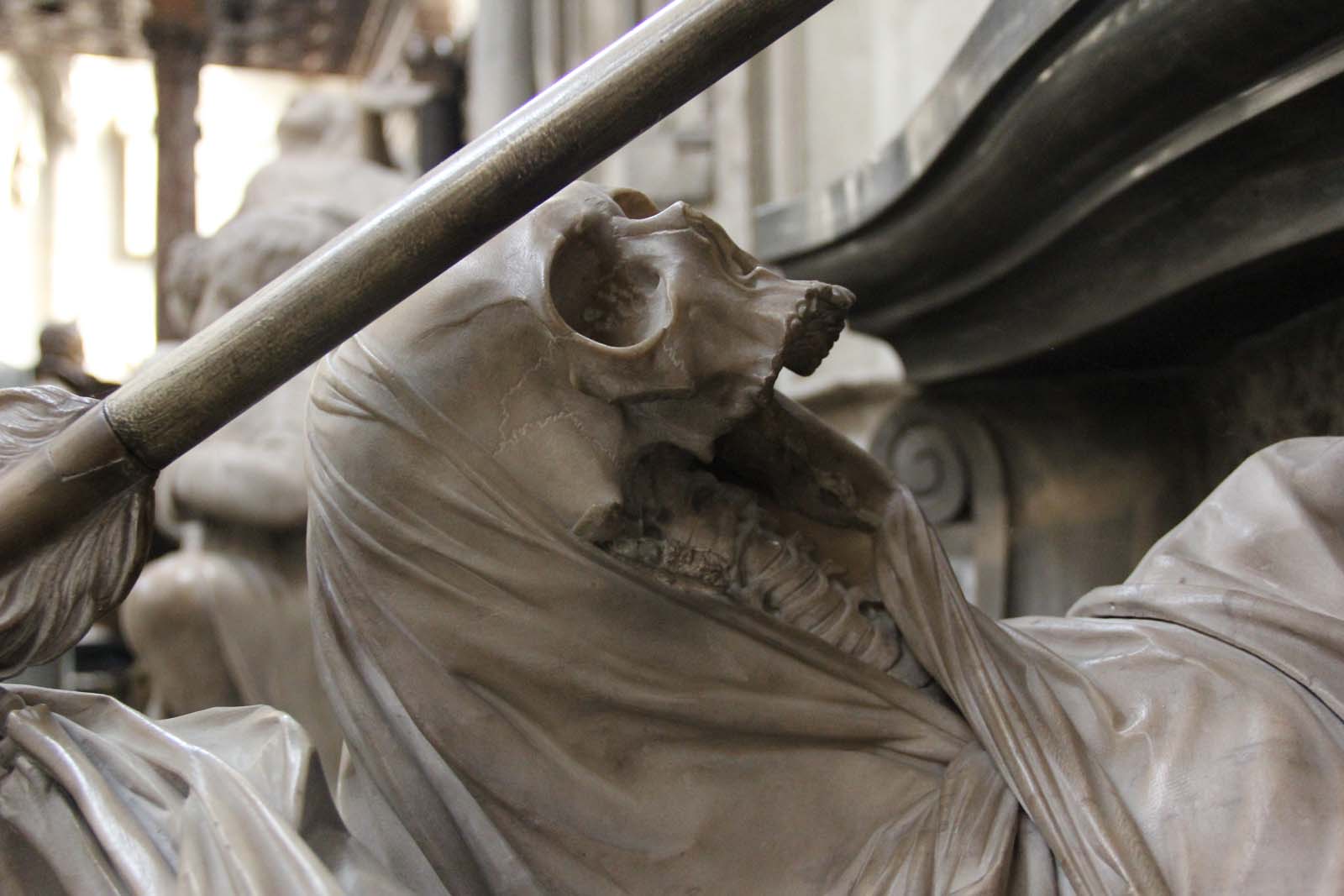 The skeleton with its missing lower jaw. Courtesy The Dean and Chapter of Westminster Abbey

John Wesley, the leader of the Methodist movement, called the monument one of the finest in the Abbey, saying ‘the marble seems to speak’; while American writer Washington Irving declared it ‘among the most renowned achievements of modern art’.

The skeleton’s lower jaw is now missing and the spear is a later wooden replacement, but the memorial has lost none of its impact over the intervening centuries. It is said that one night a robber broke into the church but was so horrified at seeing the figure of Death in the moonlight that he dropped his crowbar and fled in terror. The crowbar was displayed for many years beside the monument but it no longer remains. 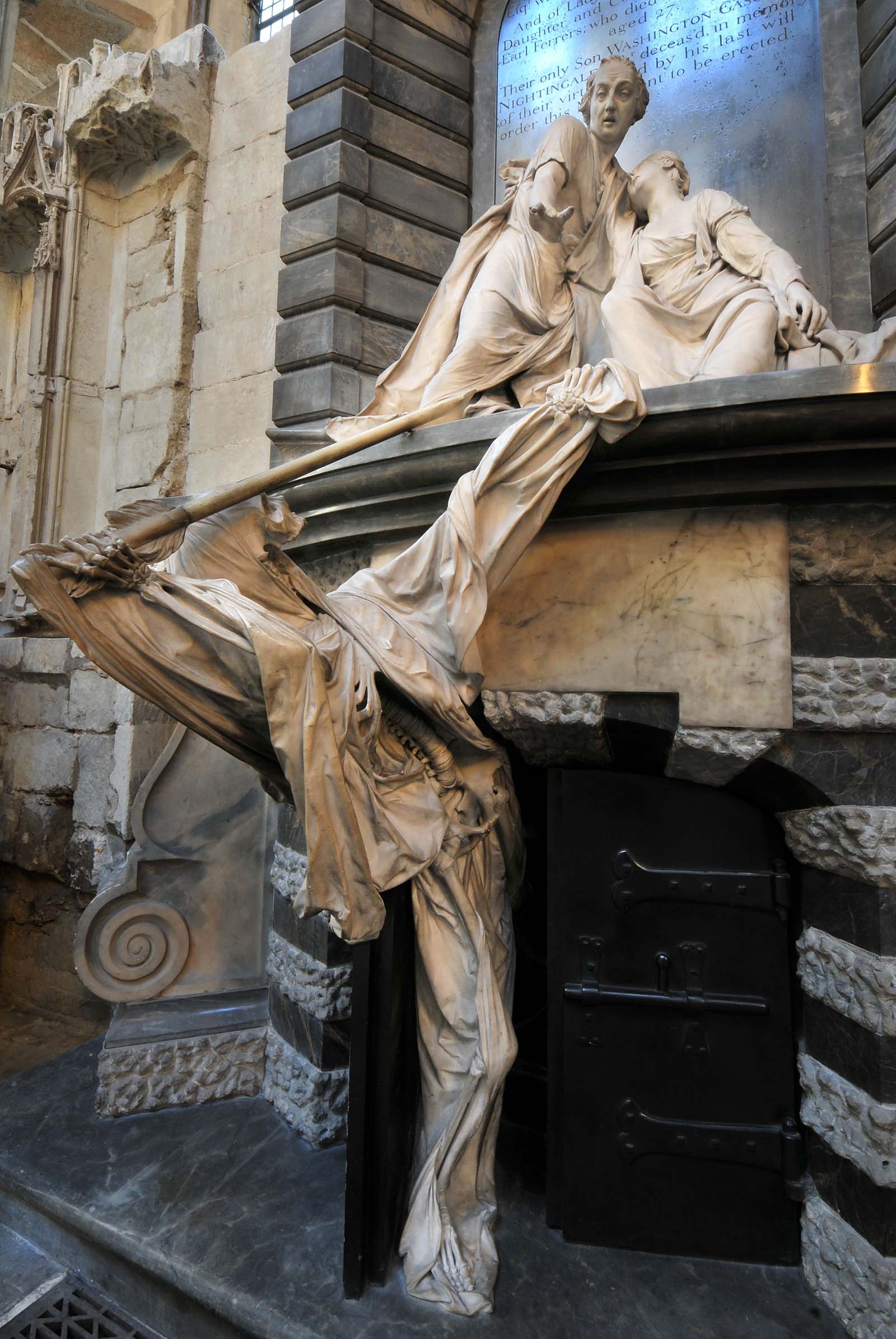 The Westminster Retable on display in The Queen’s Diamond Jubilee Galleries.

The 13th century Retable is England’s oldest altarpiece. It’s one of the most important treasures of the Abbey collection, though at first sight it can be difficult to visualise what it must originally have looked like.

Probably made in Westminster by craftsmen influenced by French court art, it stood at the back of the high altar. Made of painted and gilded wood, but with decorative metalwork, enamel, glass and other materials adding to its artistic complexity, it would have been an opulent and beautiful work of art. 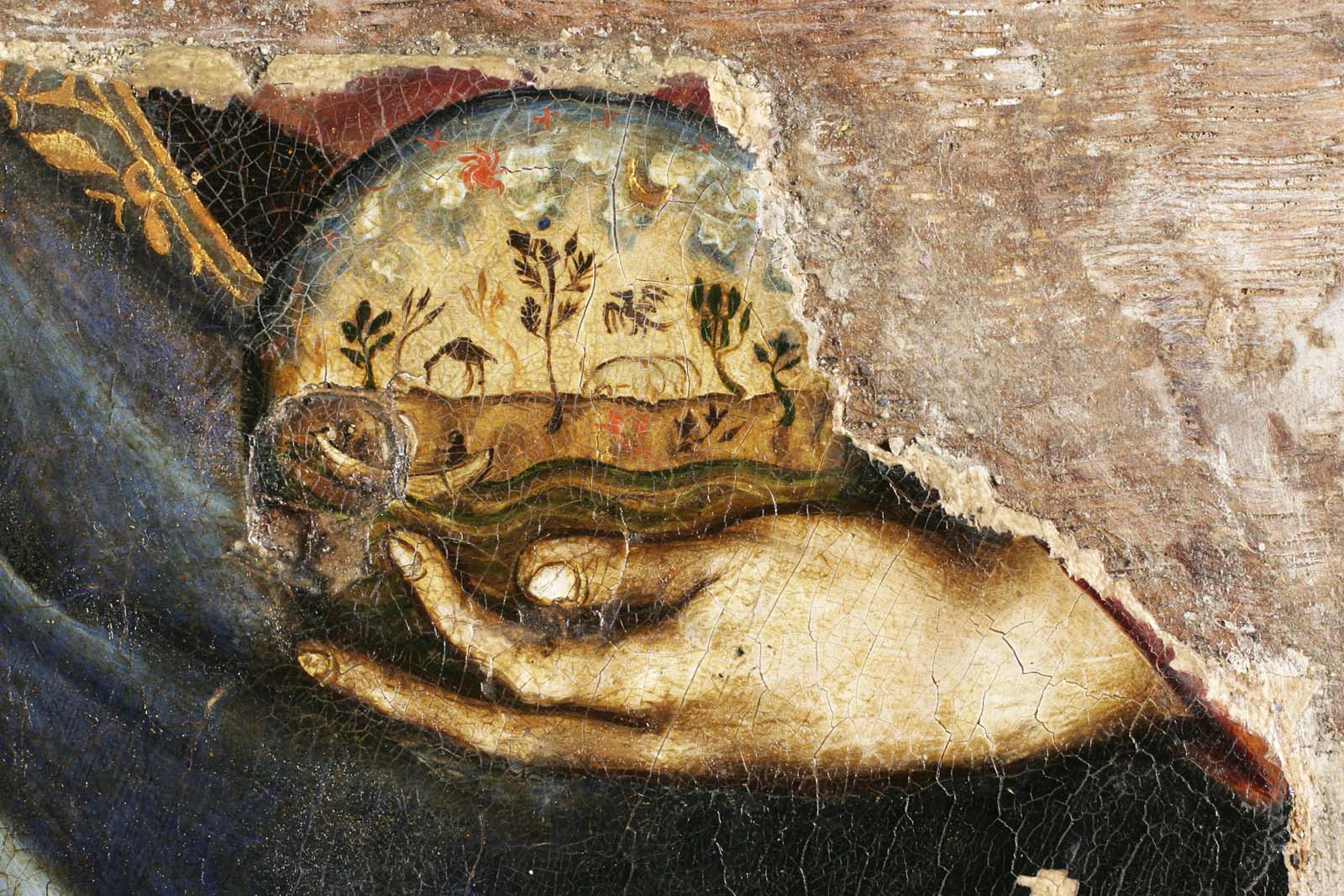 Detail of the orb held in Christ’s hand, from the 13th century. Courtesy The Dean and Chapter of Westminster Abbey

In the central panel, beneath Gothic arches, stands a figure of Jesus Christ, flanked by the Virgin Mary and St John the Evangelist and with his right hand raised in blessing. His left hand holds an orb representing the world, which is painted with remarkable miniatures of the sun and moon, water and a boat, animals and birds. On the left is a figure of St Peter, the Abbey’s patron saint, holding the key to heaven. 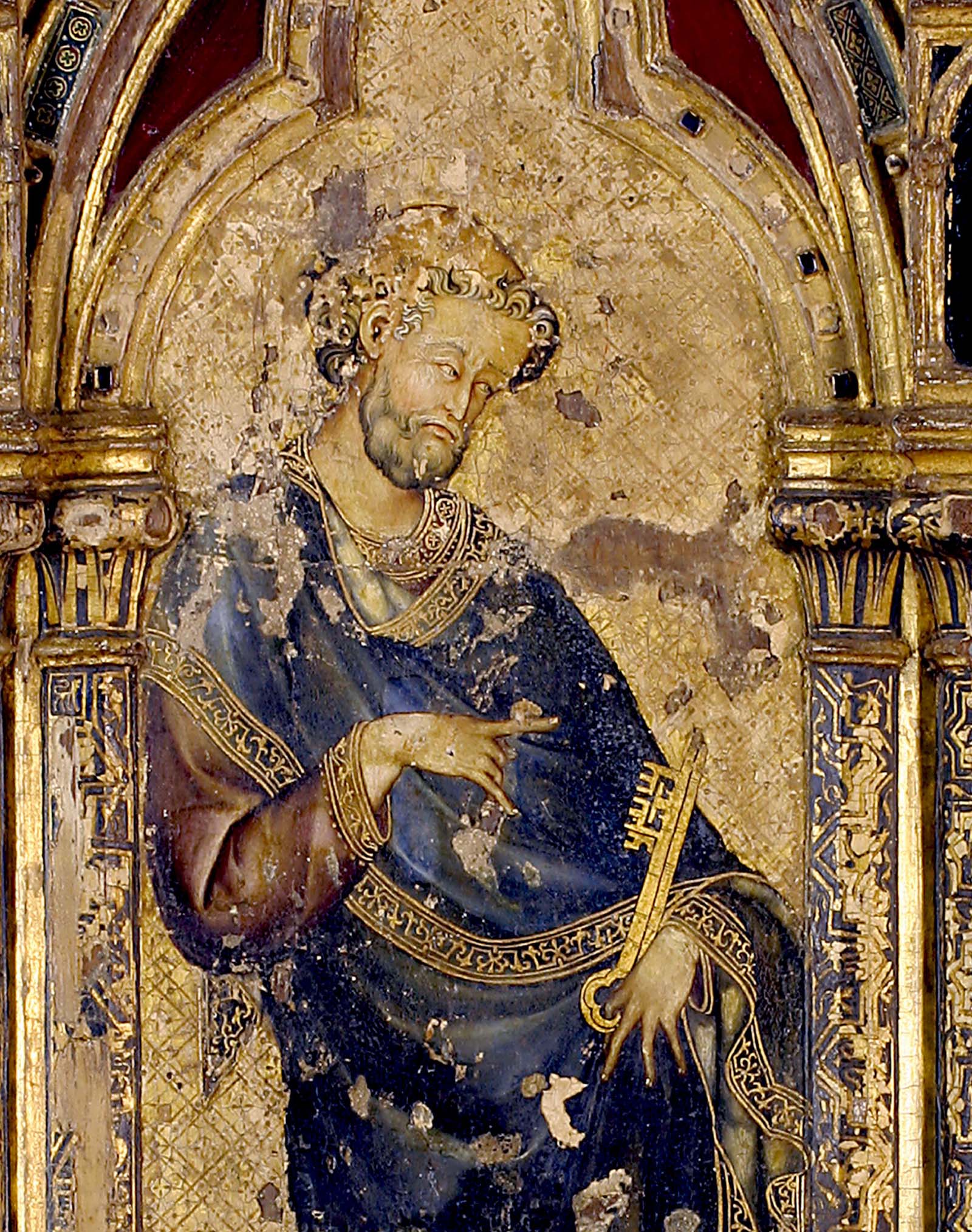 Painting of St Peter from the Westminster Retable. Courtesy The Dean and Chapter of Westminster Abbey

Two intermediate panels each contain four medallions. Those on the right have lost their paintings, but some of the exquisite thirteenth-century paintings of the miracles of Jesus survive on the left.

Although treasured today, the Retable hasn’t always been so well looked after. It survived both the Reformation and the Civil War but in the 18th century the two right hand panels had most of their medieval paint removed, and in 1725 the antiquarian George Vertue discovered the Retable being used as the top of a cupboard housing the Abbey’s collection of funeral effigies.

It was not until 1827 that the Abbey architect, Edward Blore, re-discovered it and steps were taken to preserve it. Then in 1998 a lengthy programme of conservation work began which revealed the true splendour of this remarkable medieval treasure. 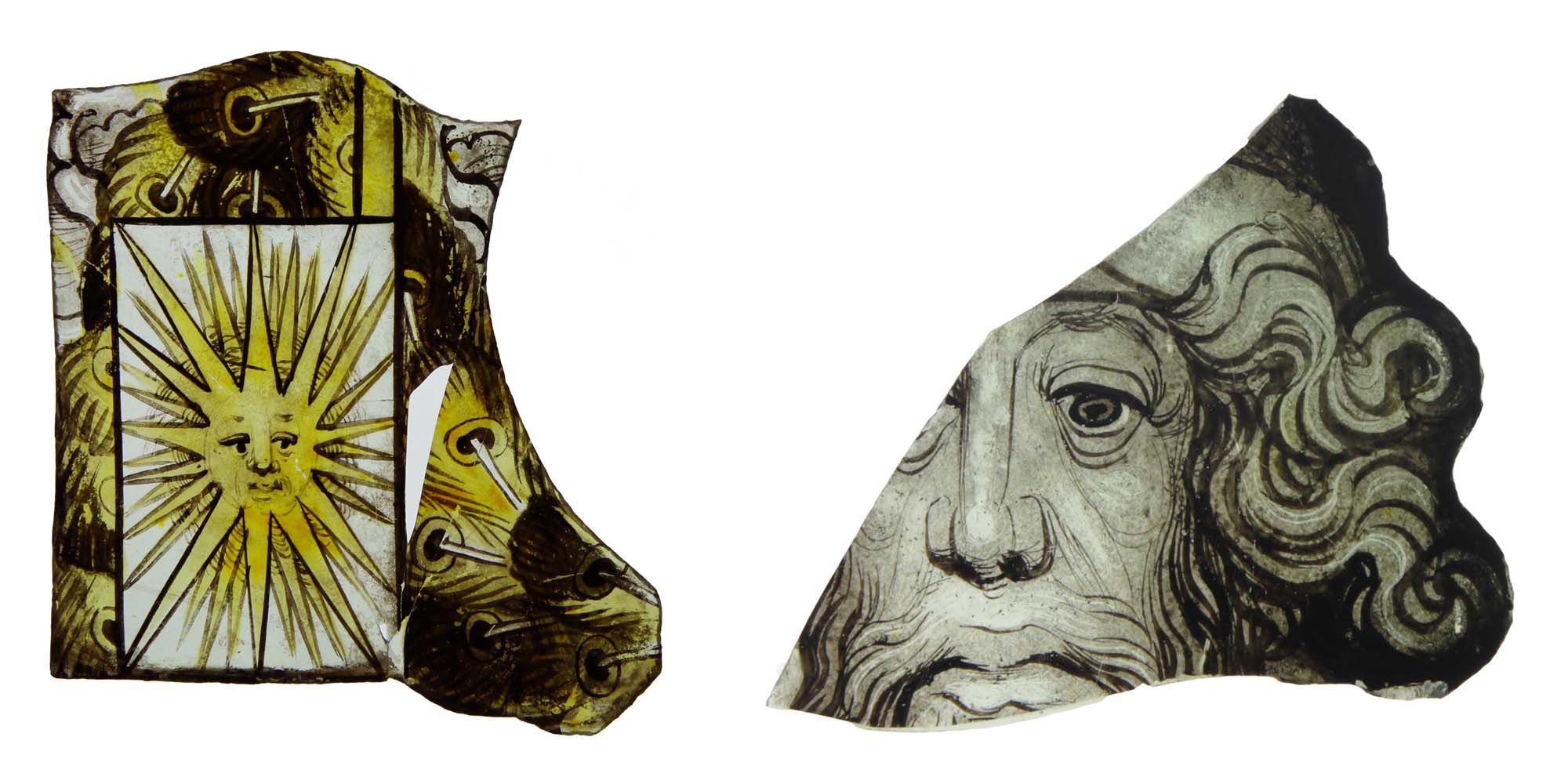 These pieces of medieval glass are important survivals from Henry III’s Abbey, built on the site of Edward the Confessor’s church in the mid- 13th century in the new gothic style of architecture, and the building that stands today. They are among some 30,000 fragments found under the floorboards of the trifoirum during restoration work prior to the opening of The Queen’s Diamond Jubilee Galleries in 2018. Most date from between 1250 and 1500, and building accounts show that in 1253 the Abbey bought both coloured and white glass from Lawrence the Glazier to make windows. 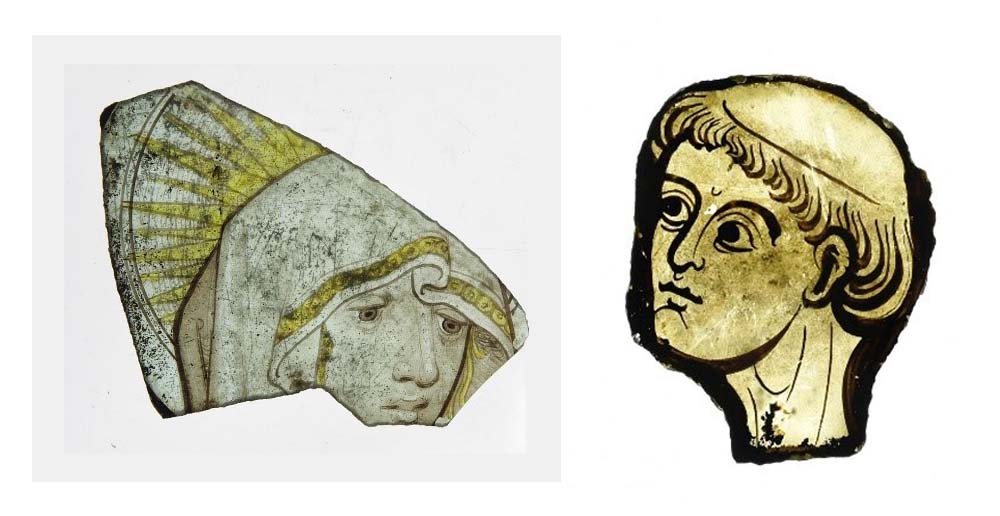 Examined altogether, this previously undiscovered cache of glass sheds new light on the Abbey’s glazing. With their painted faces, written inscriptions and coats of arms, they hint at what the Abbey’s medieval windows would have looked like. Many of the pieces are of grisaille glass: clear glass painted in black line, often with floral or leaf designs. Grisaille windows were commonly found in medieval churches, with the colourless panels allowing more light into the building.

Glass was expensive (and coloured glass was twice the price of clear) and these panels may have been re-used in different locations at different times. Their loss may have resulted from the extensive re-glazing in the Abbey and building works in the triforium undertaken by Sir Christopher Wren from about 1700. 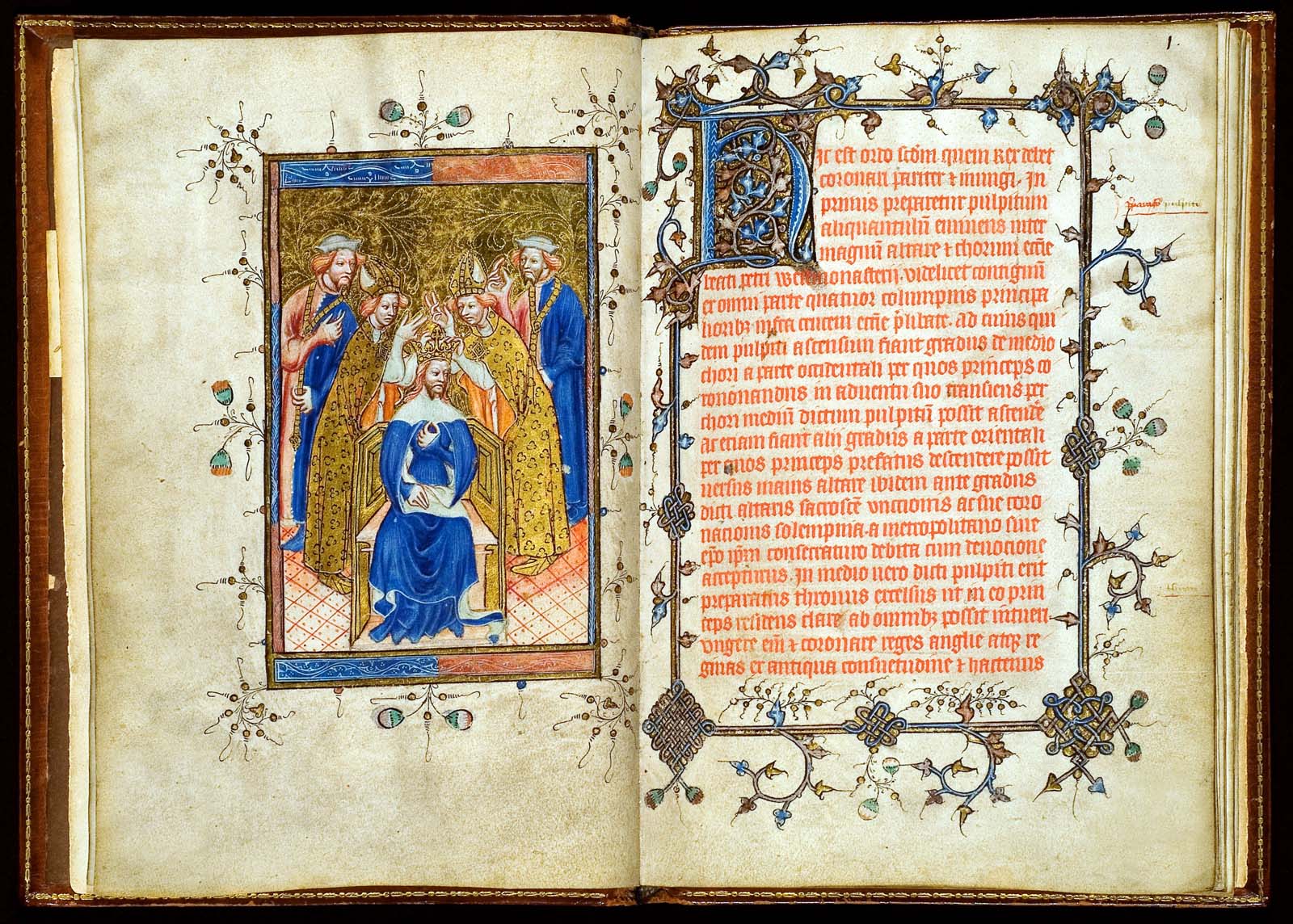 Illustration from the Liber Regalis showing the crowning of a king. Courtesy The Dean and Chapter of Westminster Abbey

If you’ve ever wondered how to stage a coronation service, then the Liber Regalis – or ‘royal book’ – has the answers.

The Abbey has been the coronation church since 1066 and the manuscript was probably made in Westminster, possibly using continental artists, in around 1382. Because of its usefulness for those charged with organising coronations, it’s thought to be one of the very few books left at the Abbey after the destruction and dispersal of the library at the dissolution of the monasteries. 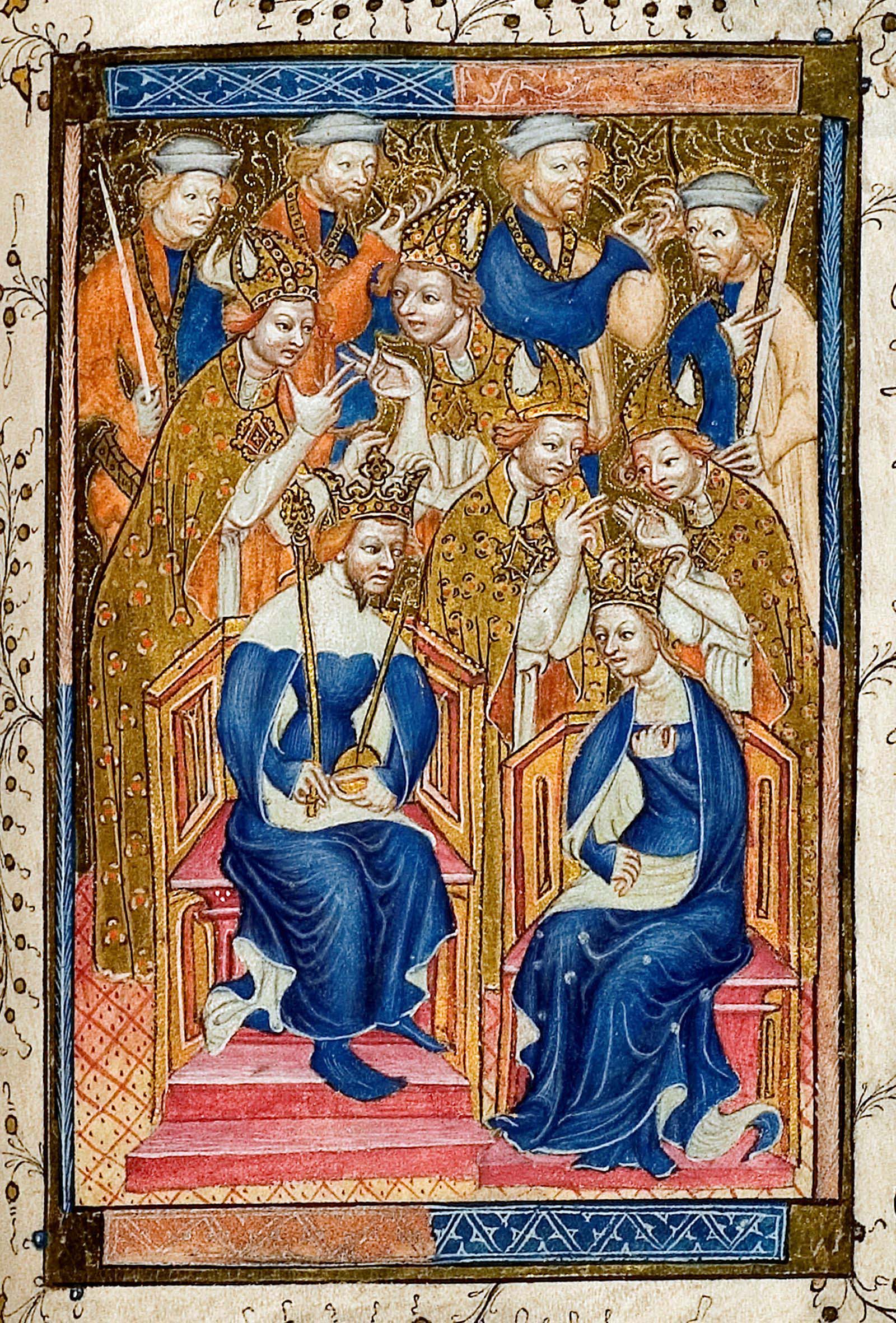 A king and queen are crowned together in an illustration from the Liber Regalis. Courtesy The Dean and Chapter of Westminster Abbey

The ceremonial instructions and order of service contained in the manuscript reflect the service as it was performed until the reign of Elizabeth I. Indeed, despite various changes after that date, the basic format remains recognisable in all subsequent coronation services.

The manuscript is written on vellum. It contains four illuminated images to illustrate the accompanying text: the act of crowning a king, a king and queen together, a queen alone, and the funeral of a king. In this image, a king and queen are crowned simultaneously, although the queen’s throne sits on a lower step than that of the king.

Anne of Bohemia, however, was crowned on her own in 1382; Richard II, her husband, in 1377. A century passed before the next joint coronation, that of Richard III and Anne Neville in 1483. 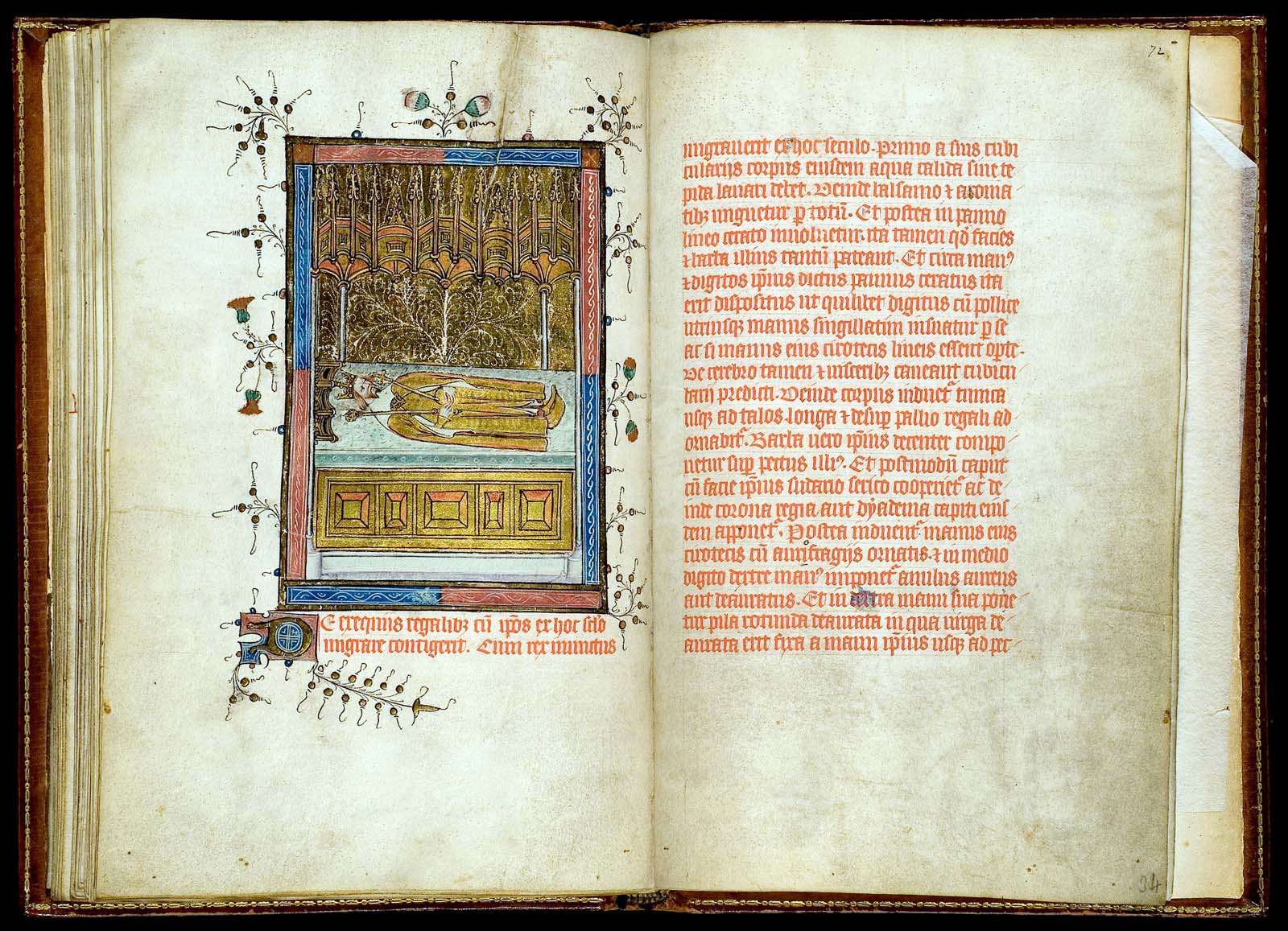 Illustration of the funeral of a king from the Liber Regalis. Courtesy The Dean and Chapter of Westminster Abbey

You can see all of the treasures from the guide on permanent display in the Abbey’s museum, The Queen’s Diamond Jubilee Galleries, which has re-opened for visiting for the first time since the start of the pandemic.