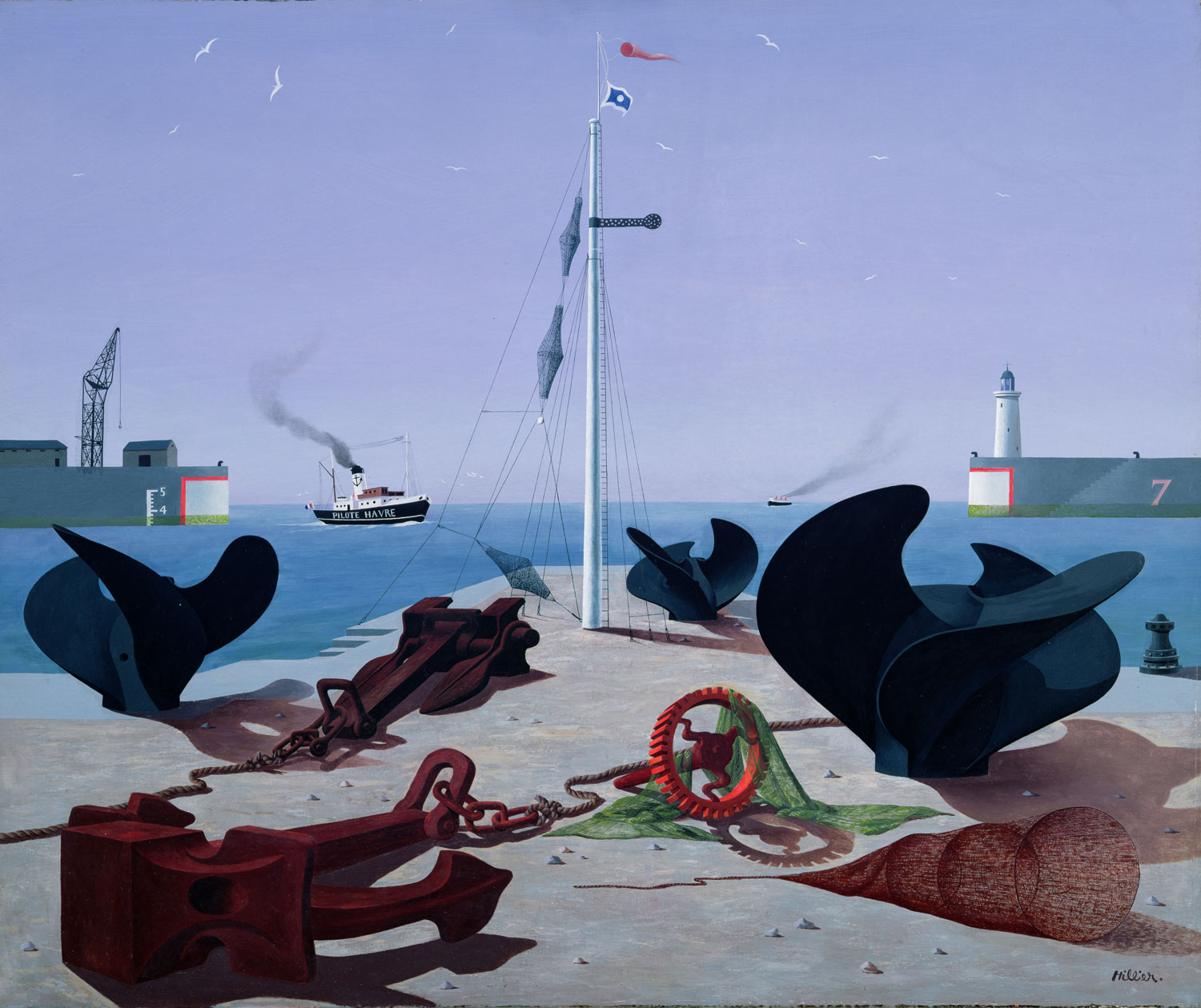 At first glance there’s something quintessentially British mid-century about Tristram Paul Hillier (1905 – 1983), a painter whose canvasses not only display the English absorption of modernism but also offer a stark vision of the British countryside that seems peculiarly home grown.

But there’s more to Hillier than a new take on romanticism and the English idyll that captivated many British painters of the 1930s and 40s. In Paris during the 1920s he met and was influenced by members of the Surrealist movement and many of his paintings evoke an air of other-worldliness and the incongruous objects he painted and his use of unreal perspectives add a surreal quality.

But this is no Ravilious, and the Museum of Somerset are exploring his fascinating world with the first major retrospective of his art in more than 30 years, bringing together over 50 works. 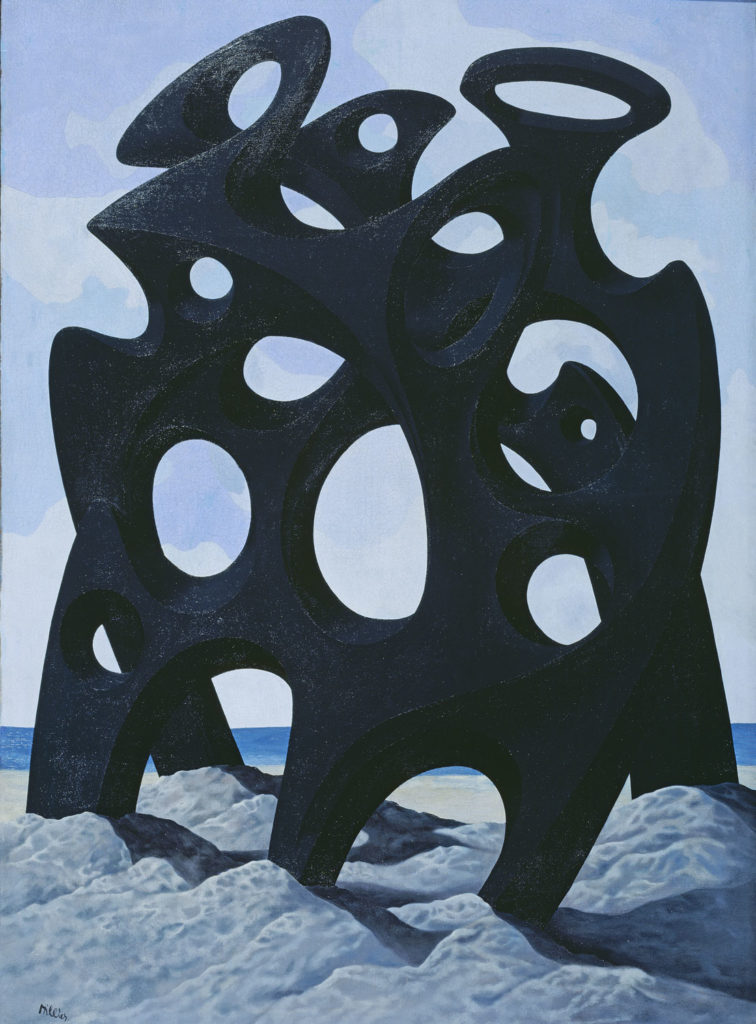 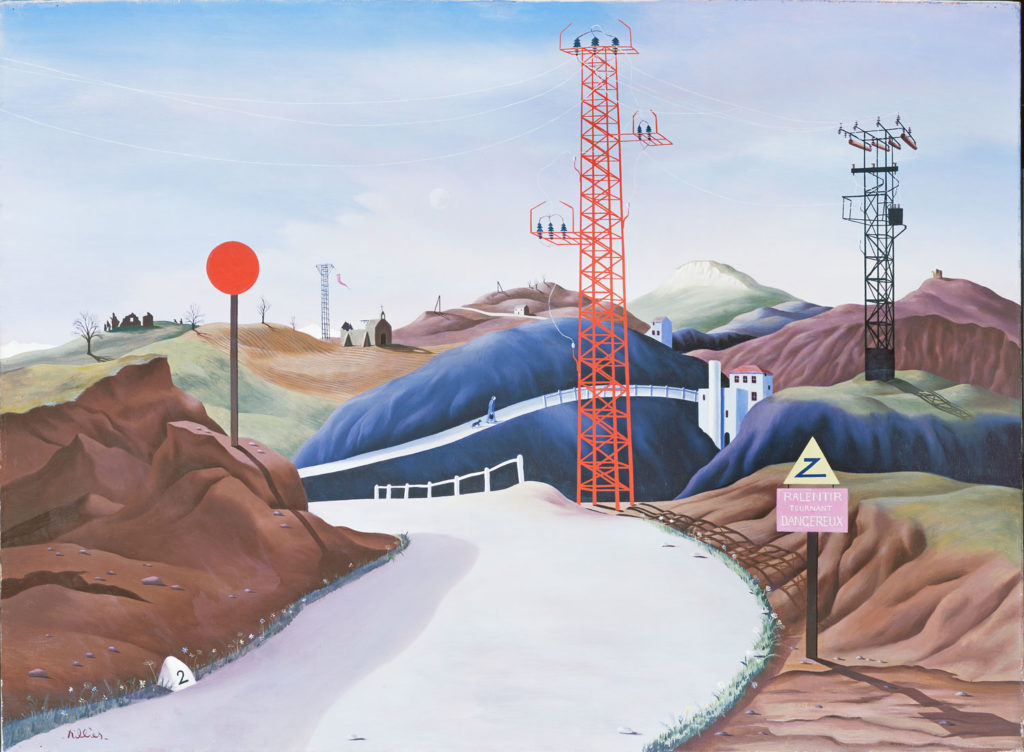 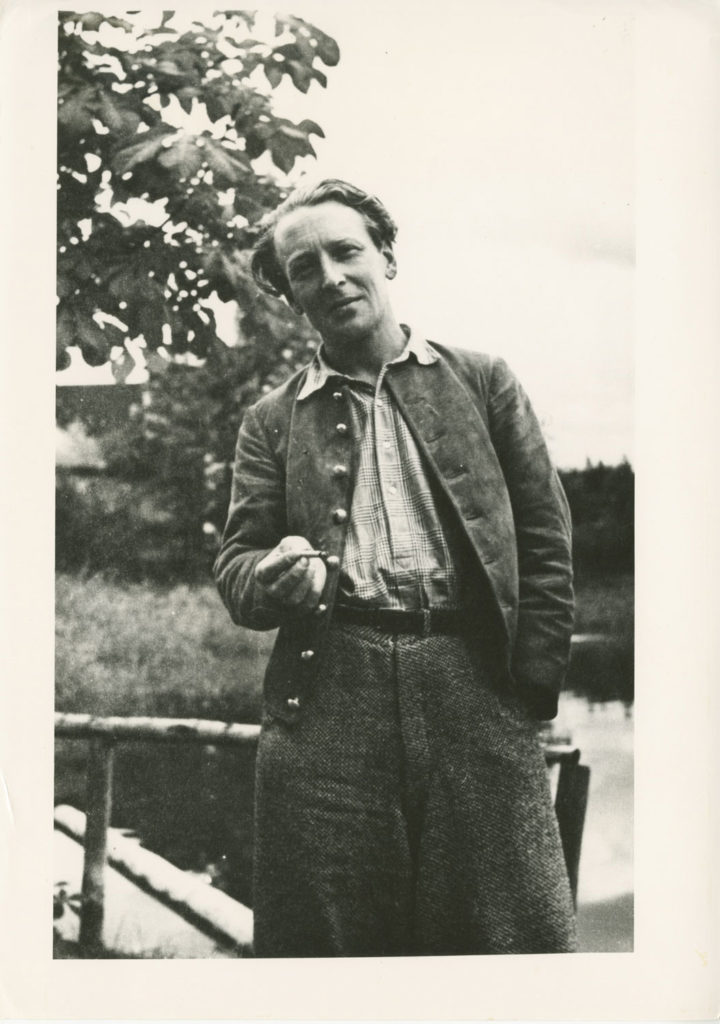 “He’s an interesting figure in the canon of British 20th century art,” says Sarah Cox, Exhibitions and Programme Manager at the museum. “It’s often said that Hillier’s art is a distinctly English kind of modernism, even in his early work – before he began experimenting and found his definitive style – he was part of Unit One, (the Avant Garde modernist group led by Paul Nash) who were influenced by what was happening on the continent – but doing it in a very English way.”

Hillier’s beginnings were distinctly rootless. Born in 1905 in Peking, where his father was a banker and diplomat, he moved back to England when he was six months old.

“He had a relatively turbulent early life,” says Cox, “he didn’t have a particularly settled place to call home. He spent the first two years moving around and when he went to Downside School in Somerset at the age of 11 that was really his first home.”

In 1922 he returned to China to study the language and then after two years studying at Cambridge University he dropped out and, under pressure from his banker father, was apprenticed to a London firm of chartered accountants. But he had already developed a passion and talent for painting and drawing and he quickly abandoned this career to study at the Slade School of Fine Art.

“The Slade was formative for him,” says Cox, “he was taught by Henry Tonks who was a towering figure at that time, but very traditional. There are stories of Tonks only allowing his pupils to use a pencil for the first year because they had to master the art of drawing.”

Hillier found succour in evening classes where he was taught by the painter Bernard Meninsky, which is where he first encountered abstract art and the influence of the continent.

The continental life suited Hillier during the 1930s and until 1940 he lived happily in France where he befriended prominent Parisian artists such as Georges Braque, Max Ernst and André Masson. He also travelled extensively, until the Second World War forced him to flee with his wife Leda and infant daughter to a new home in Somerset. 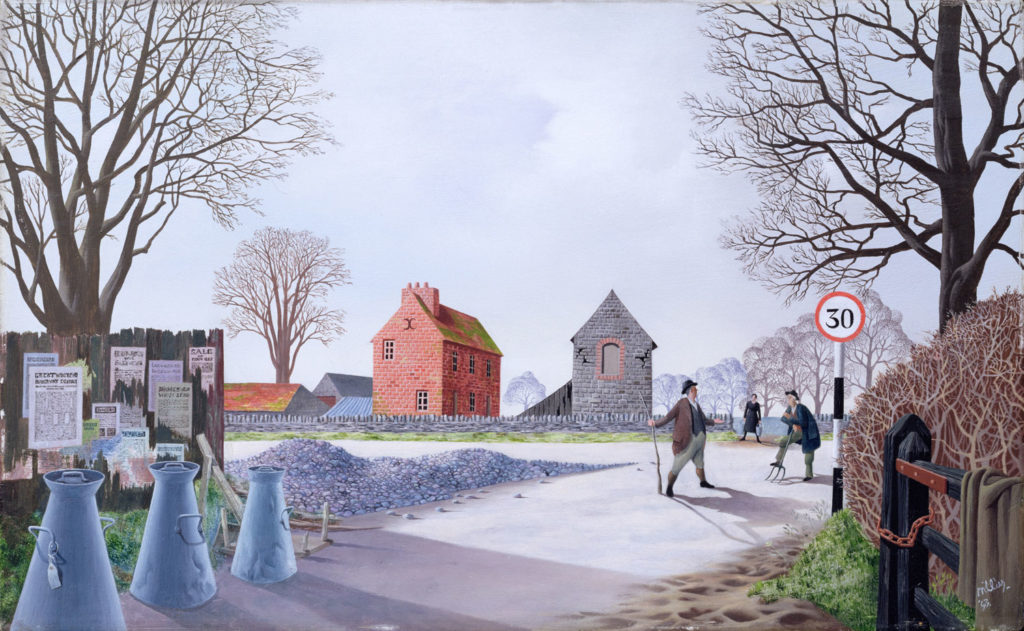 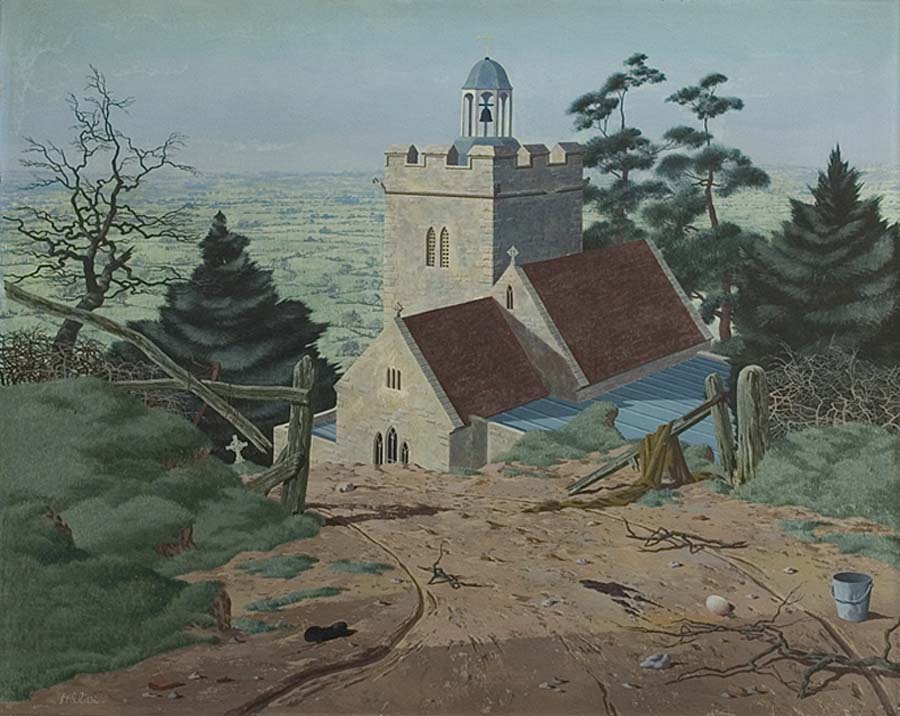 Tristram Hillier, The Vale from Cucklington. 1943 © The Museum of Somerset 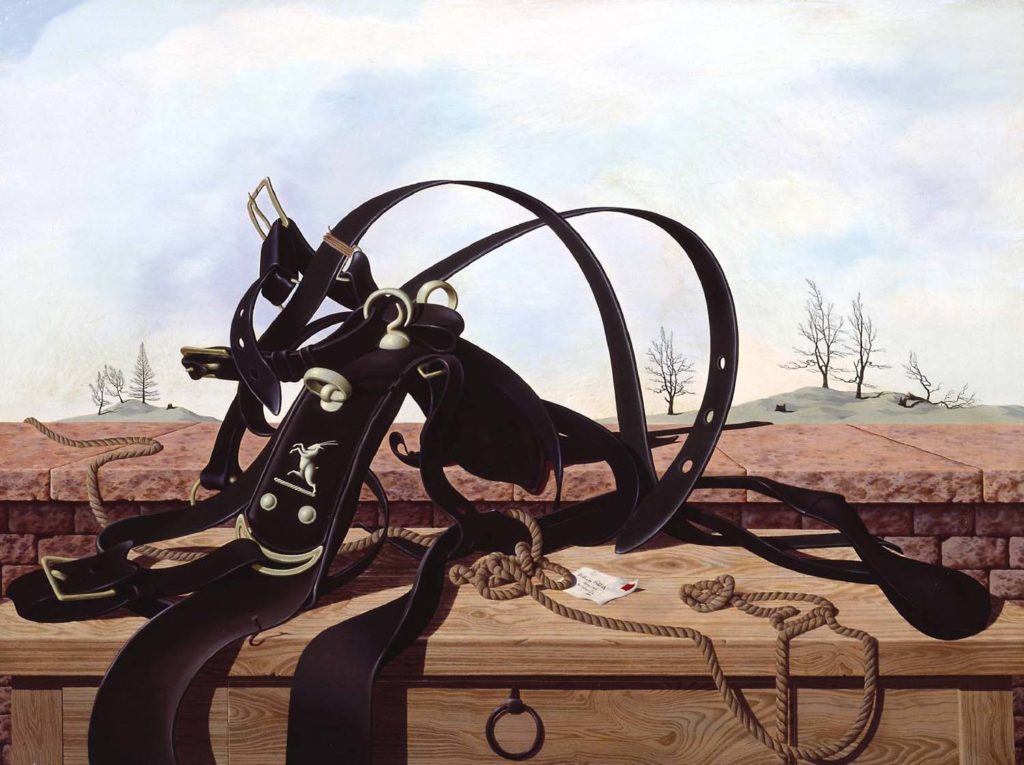 For a time he served in the Royal Navy Volunteer Reserve, but the upheavals of the war and his difficult early life led in 1942 to a mental breakdown and he returned home.

“His wartime service also meant he didn’t really draw or paint for three or four years,” says Cox, “he wrote in his letters how difficult he found that, not only being away from his family but also unable to do what was his life calling.

“Instead he wrote, and the freedom of expression he found through his war diaries led to him write his autobiography, Leda and the Goose, in 1954.

“He is a really wonderful writer who can evoke a time and a place and the book takes you up to his family coming up to Somerset in the early thirties and also moving between Paris and Cassis in the South of France where a lot of artists were centred at that time.”

After the trauma of war Hillier painted consistently and Somerset became the workshop of his artistic life.

“I’m drawn to the paintings he produced in ‘43 and ‘44 when he was just back from the war and was excited to be painting again,” says Cox. “He wrote about how he went to the studio and just couldn’t stop painting – and they are very beautiful English landscapes depicting farm buildings, agricultural equipment and milk churns that are really evocative of the idealised English countryside.”

But the English rural idyll was never going to be enough for Hillier and after 1945 he returned for long periods to Spain and Portugal where he travelled, always with his sketchbook to hand, to create preparatory sketches. In the wintertime he would return to his home in East Pennard, overlooking the Somerset Levels. He remained there, with Leda, until his death in 1983.

“I’ve always found it interesting that he decided to summer by travelling in the hot place and winter here in the cold, but that’s why some of the native Somerset paintings are quite bleak and wintery,” says Cox. “The Portugese and Spanish and paintings, which capture the colour and warmth of those countries, were also produced in a cold Somerset studio from his sketches and what he remembered of his travels.”

And it’s certainly tempting to read the later life of Hillier and some of the canvasses he produced, as an allegory of his reclusiveness or even depression.

“I think that’s one way of reading it,” says Cox, “and in the exhibition one thing that does emerge is the duality between his early life when he was sociable and immersed in the current modernism, and the later years when he withdrew from a lot of his former social circles. He would certainly maintain a very strict regime where he was isolated. But there are various ways of reading it.” 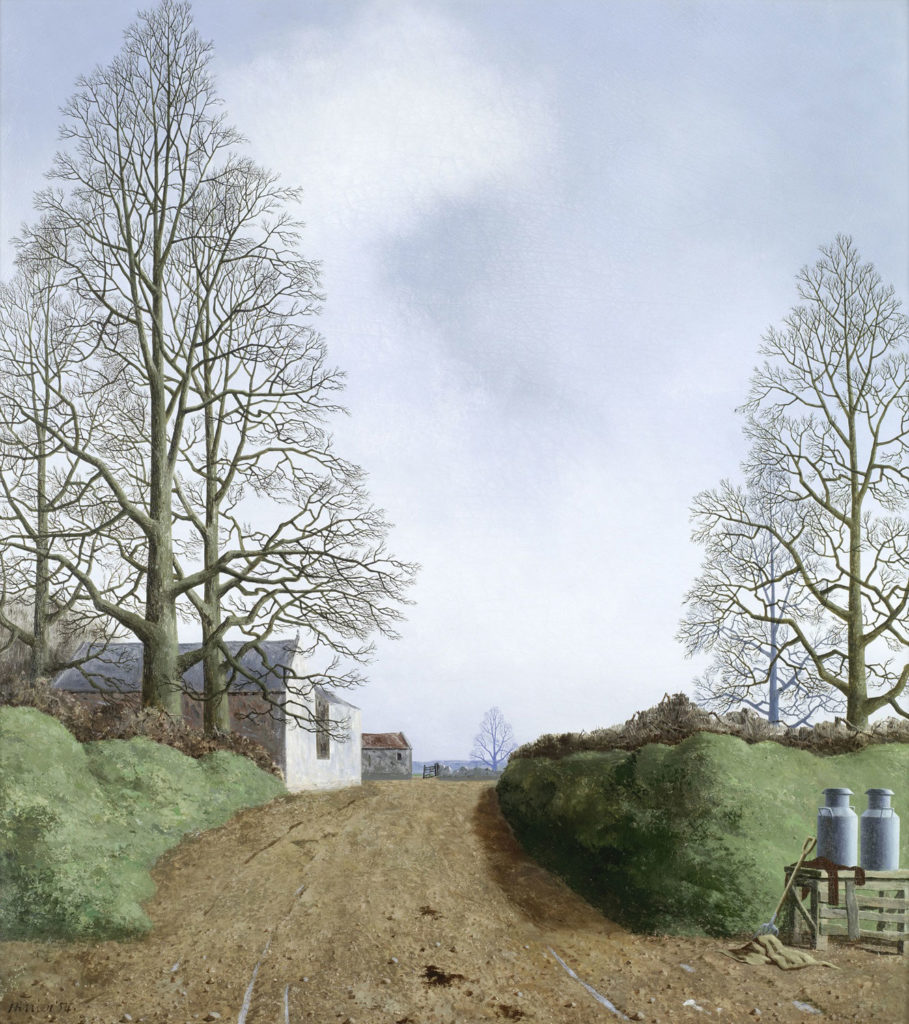 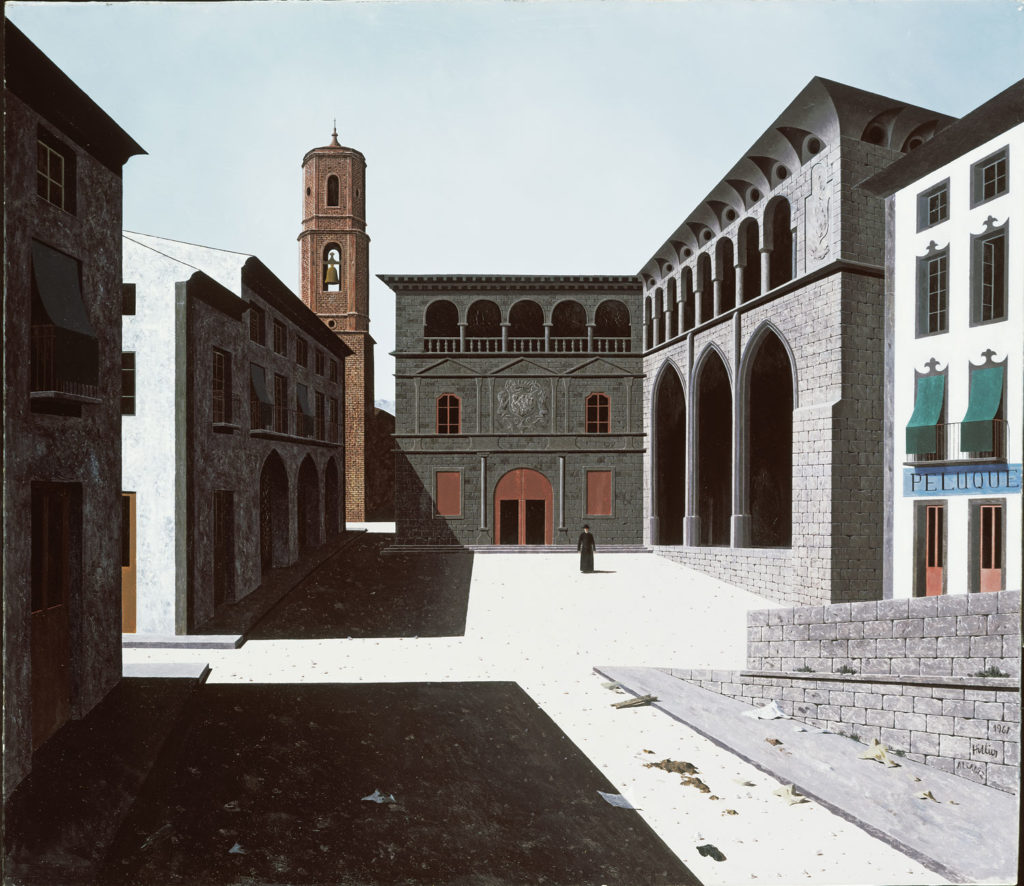 Visitors will be able to draw their own conclusions from an impressive collection of artworks from all over the UK and further afield. They join the Museum of Somerset’s own characteristically English landscape, Vale of Cucklington, a moody and desolate view of the Medieval church of St Lawrence with the Somerset fields in the distance, which was produced on Hillier’s return from the war in 1943, and a brilliantly stark rendering of the power station at Portishead built in the 1950s.

Hillier also took photographs, and locally taken shots evoke the times and places where he lived and worked in Somerset. His prolific and detailed sketches and drawings are also featured together with outstanding paintings by Nash, Edward Wadsworth and Ben Nicholson also feature in the exhibition.

Whether it’s the exploratory, vivid surrealism of the early years or the eerie asceticism that came in his later life, Tristram Hillier’s paintings offer an ambiguous, dream-like quality and this exhibition in the county where he found the peace and isolation to make his art is an all too rare opportunity to explore and enjoy them.

Landscapes of the Mind: The Art of Tristram Hillier is at the Museum of Somerset from Saturday November 9 to Saturday April 18.

The Museum of Somerset

An under-floor Plesiosaur, the largest collection of Roman coins ever discovered in Britain and a chilling recreation of the infamous Bloody Assizes – you’ll find them all at the Museum of Somerset! Set in the heart of Taunton, the Museum of Somerset lies within the historic 12th Century Taunton Castle.…