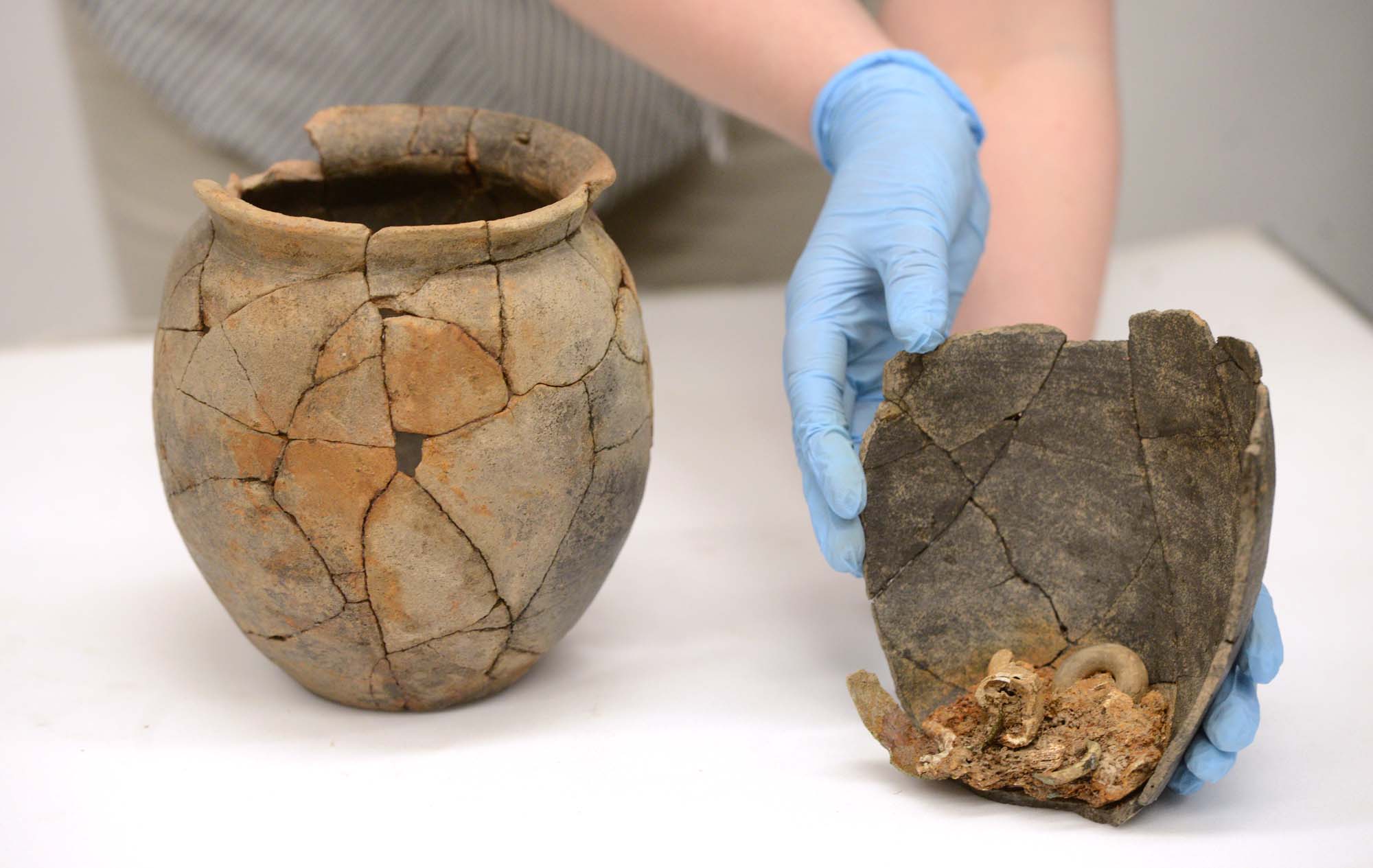 Curator of Roman collections at Corbridge Roman Town Frances McIntosh with cremation jugs from Birdoswald cemetary. The complete one contained the remains of a 5 year old. The half one has the remains of a female inside. © English Heritage

These previously unseen Roman cremation urns were used to hold the ashes of a young woman and a five year old child.

Discovered just outside Birdoswald Roman Fort on Hadrian’s Wall, they are the remains of what archaeologists think might even be a mother and her offspring – challenging any lingering assumptions that Hadrian’s Wall was exclusively the preserve of military men.

Although buried separately, the graves of the two were joined together, indicating a very close relationship. Analysis of the child’s tooth suggests s/he was around five years old, and the woman is thought to have been in her twenties or thirties.

They were discovered during a rare cemetery excavation in 2009, which also uncovered grave goods in the urn of the woman and a section of iron chain mail from armour. Normally indicating a male burial, this discovery has left archaeologists puzzling over its meaning. 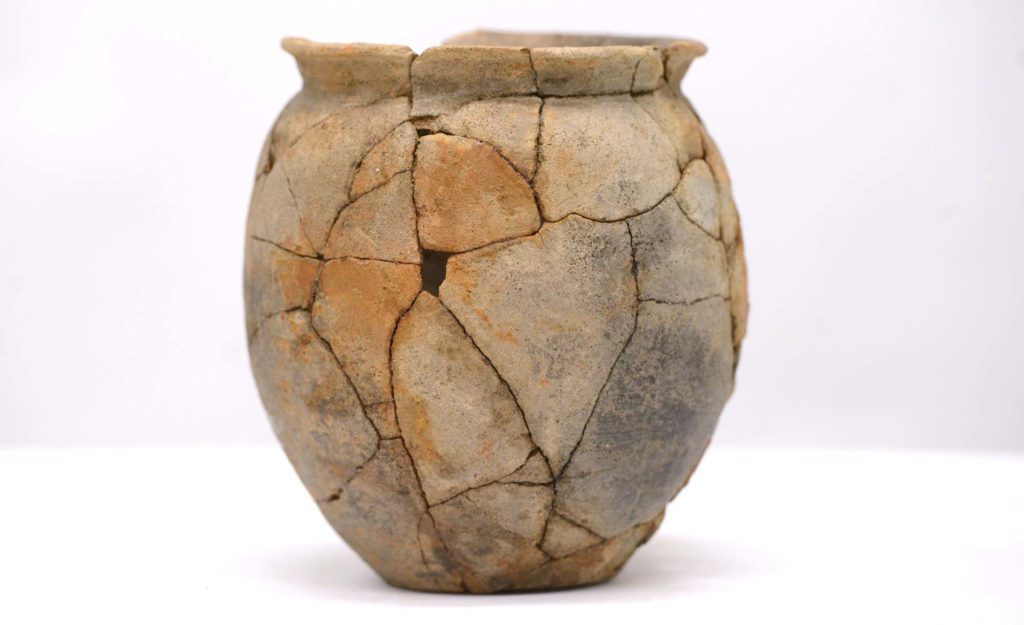 Roman Town Frances McIntosh with The Cremation jug from Birdoswald cemetary, which contained the remains of a 5 year old. © English Heritage.

The urns go on show in a new display from Friday April 26 at Birdoswald Roman Fort, which is re-opening – together with nearby Corbridge Roman Town – following a combined £1.8m English Heritage investment to improve the interpretation and visitor experience.

At Corbridge, new displays include infants’ feeding bottles, remnants of a doll, a bone whistle and evidence of board games, bringing to life the stories of people – men, women and children – who lived and died on the Roman Empire’s north western frontier.

“Alongside its military function, Hadrian’s Wall was a thriving centre of everyday life,” says English Heritage Curator of Roman Collections, Frances McIntosh. “Even though ordinary Roman soldiers weren’t officially allowed to marry until 197AD, a blind eye was often turned and many wives and children would have lived there, alongside a large community of civilians which sprung up to service the forts.

“The discovery of the woman and child is fascinating, it leaves us with questions about how they were related, and why she was buried with armour, but it also reminds us how rich and diverse the story of life on Hadrian’s’ Wall is.” 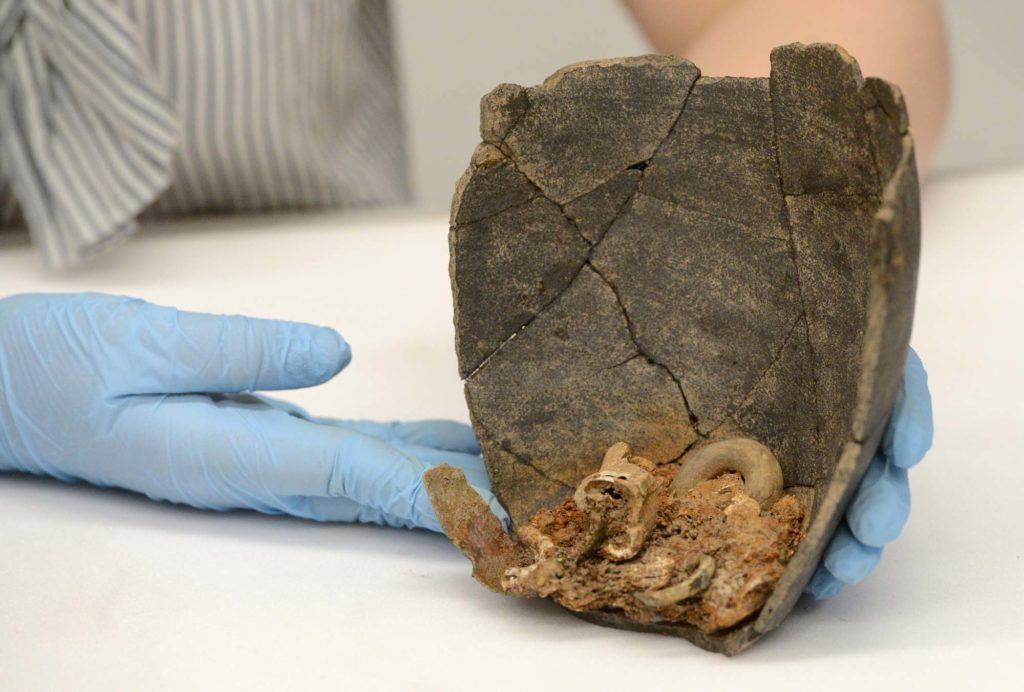 The half one has the remains of a female inside and chain male from Roman armour. © English Heritage.

At Corbridge Roman Town, new research has enabled experts to better understand what this town, the most northerly in the Roman Empire, would have actually looked like.

The museum, which houses the largest collection of Roman finds on Hadrian’s Wall, including the world famous Corbridge Hoard, now hosts a new visualisation as part of its re-presentation of the site.

Alongside the children’s games and toys, another highlight is an exquisite perfume vase, in impeccable condition and also going on display for the first time. Likely to have contained precious oils such as frankincense or the indulgent fragrance of rose water, the beautiful blue enamelled copper vessel belonged to a high status woman.

The research behind the new exhibition at Corbridge has called into question the established chronology for the site and debunked some archaeological myths, giving visitors a fascinating insight into the ordinary people of Corbridge, their lives and the changes they saw between 150AD – 410 AD.

At Birdoswald the new permanent exhibition focusses on the story of the garrison and its support communities, with a number of interactive experiences especially designed for families, including a have-a-go crane which demonstrates the expertise that was required to build the wall, and a periscope so visitors can see the same view as the Roman look-outs at the fort, which sits on the longest continuous section of Hadrian’s Wall.

On the pivotal north side of the Tyne, Corbridge played a vital role in the Roman conquest of northern Britain. The fort dates from AD139, when the Emperor Antoninus Pius once more advanced the Roman frontier into Scotland. On a principal route northwards, it became a busy garrison town. The…