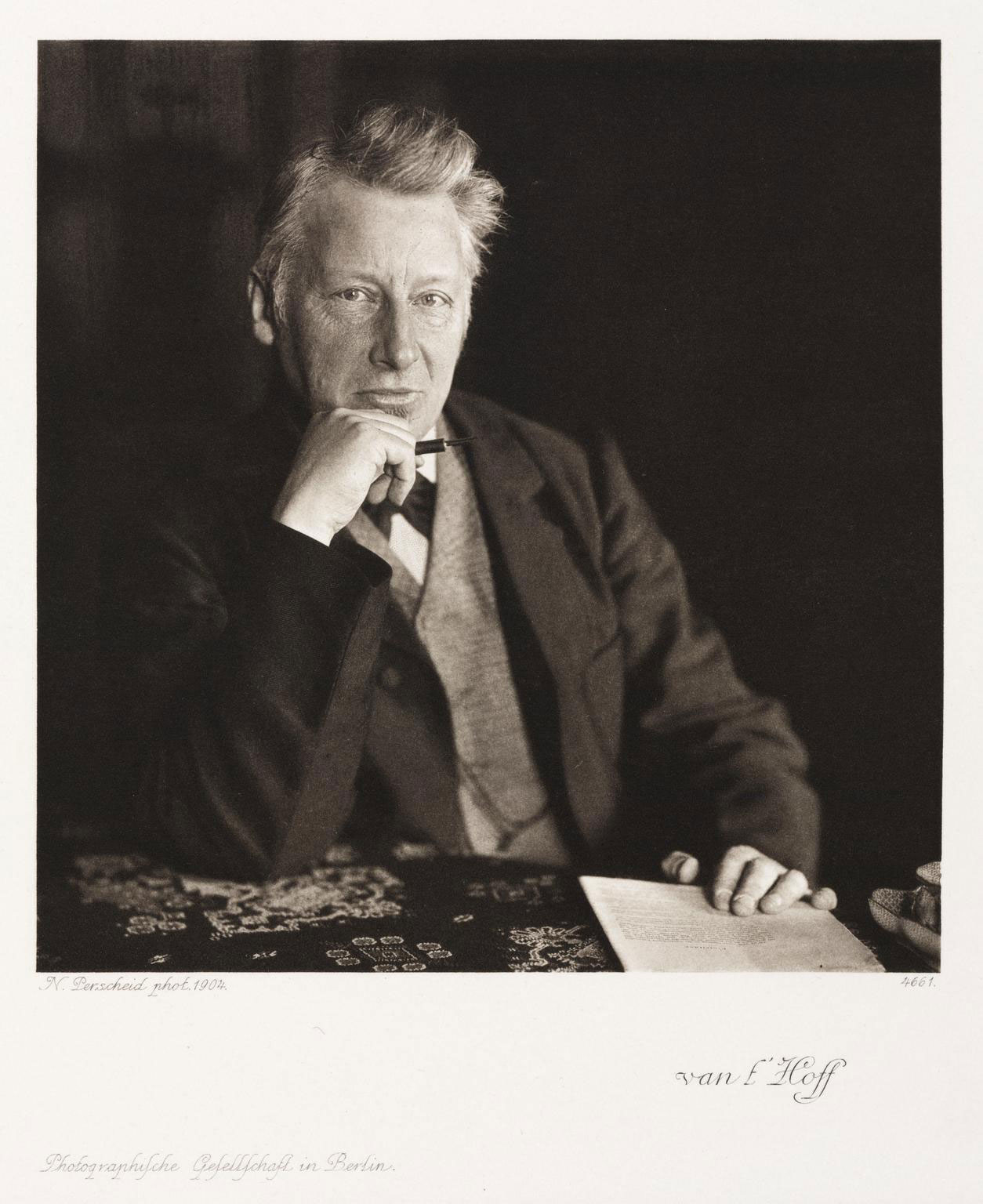 The winner of the First Nobel Prize in Chemistry – Jocobus Hendricus van ‘t Hoff © The Board of Trustees of the Science Museum (CC BY-NC-SA 4.0)

The first winner of the Nobel Prize for chemistry in 1901, Dutch chemical physicist Jacobus Henricus van ‘t Hoff was one of 19th century Europe’s most influential figures.

Making his name in organic chemistry van ‘t Hoff made many important scientific discoveries, contributing knowledge and an enhanced level of understanding to many fields of science. He won his prestigious award based on a culmination of a life’s work in the field of chemistry. 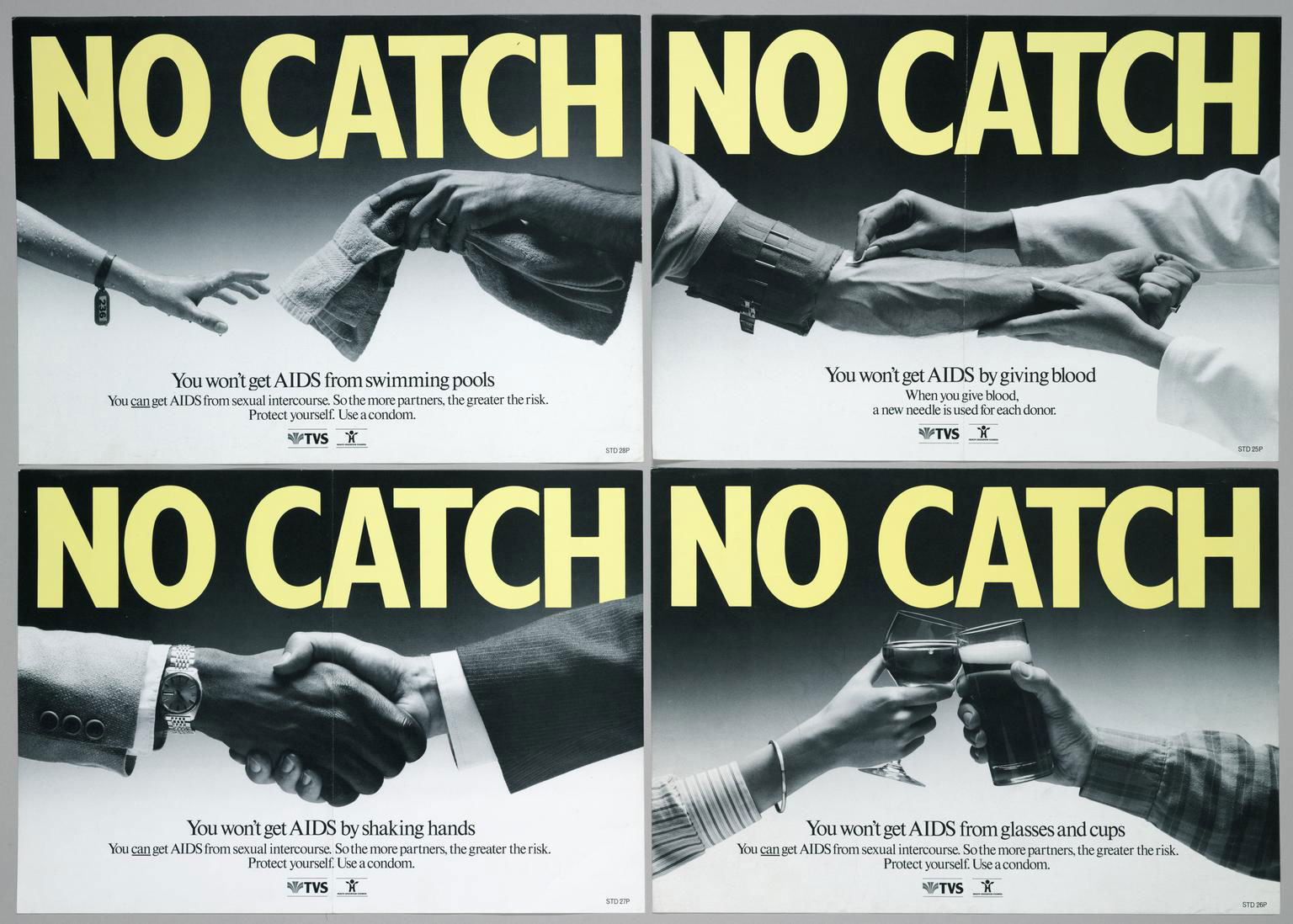 The No Catch campaign to educate the public about the AIDS epidemic © The Board of Trustees of the Science Museum (CC BY-NC-SA 4.0)

These posters, produced during the AIDS crisis of the 1980s address the anxiety surrounding HIV and AIDS, explaining to an increasingly nervous public that the disease cannot be caught from everyday activities such as swimming, shaking hands, sharing a glass or giving blood.

In the early 80s the HIV virus seemingly came from nowhere – tens, then hundreds, then thousands were dying from a mysterious illness, and the gay community was hit the hardest. For some, dealing with death became routine, and once the cause was established a slew of campaigns were created to teach the public how to protect themselves, and to let them know that everyone is at risk, regardless of sexuality, race or gender. The stigma attached to the disease terrified the population and these particular posters aimed to dispel some of the myths surrounding the virus.

While AIDS very much remains a threat to human health, a combination of education and medication has meant that for the western world the diagnosis is no longer a death sentence, and people who are HIV positive can live long and healthy lives. 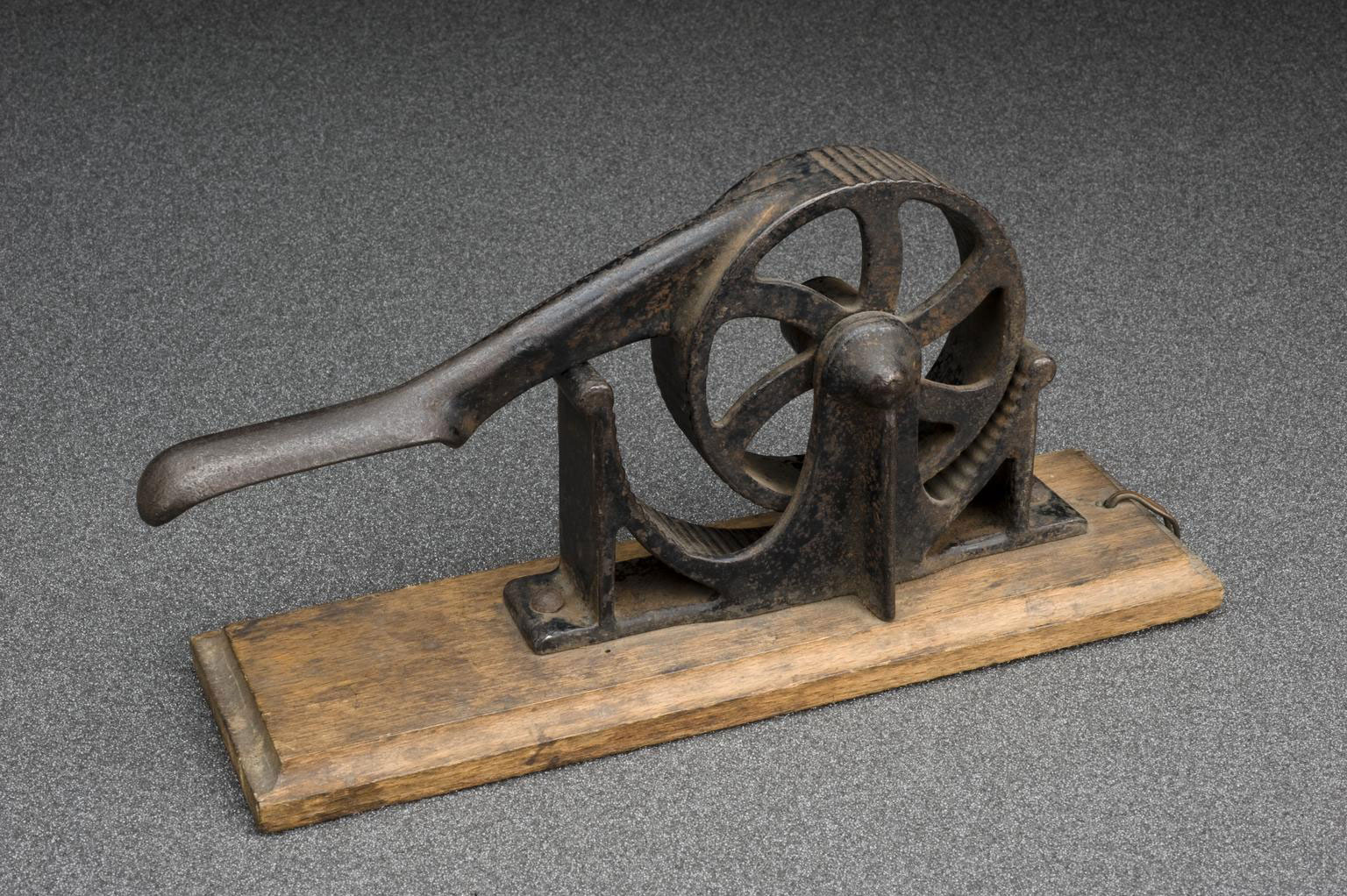 The ultimate reuse and recycle tool © The Board of Trustees of the Science Museum (CC BY-NC-SA 4.0)

While nowadays we’re more likely to see a cork sealing a bottle of wine rather than a bottle of medicine, this little machine served an important service in the late 19th century.

To save money, customers would bring their own glass bottles – recycled food and drink bottles such as beer – to their chemist or pharmacist to be filled with medicine. The bottles were sealed with a piece of cork, pressed and moulded to create an air-tight seal by a machine such as this.

This ultimate reuse and recycle practice continued until the 1930s, when pre-measured, pre-filled medicines became the norm. 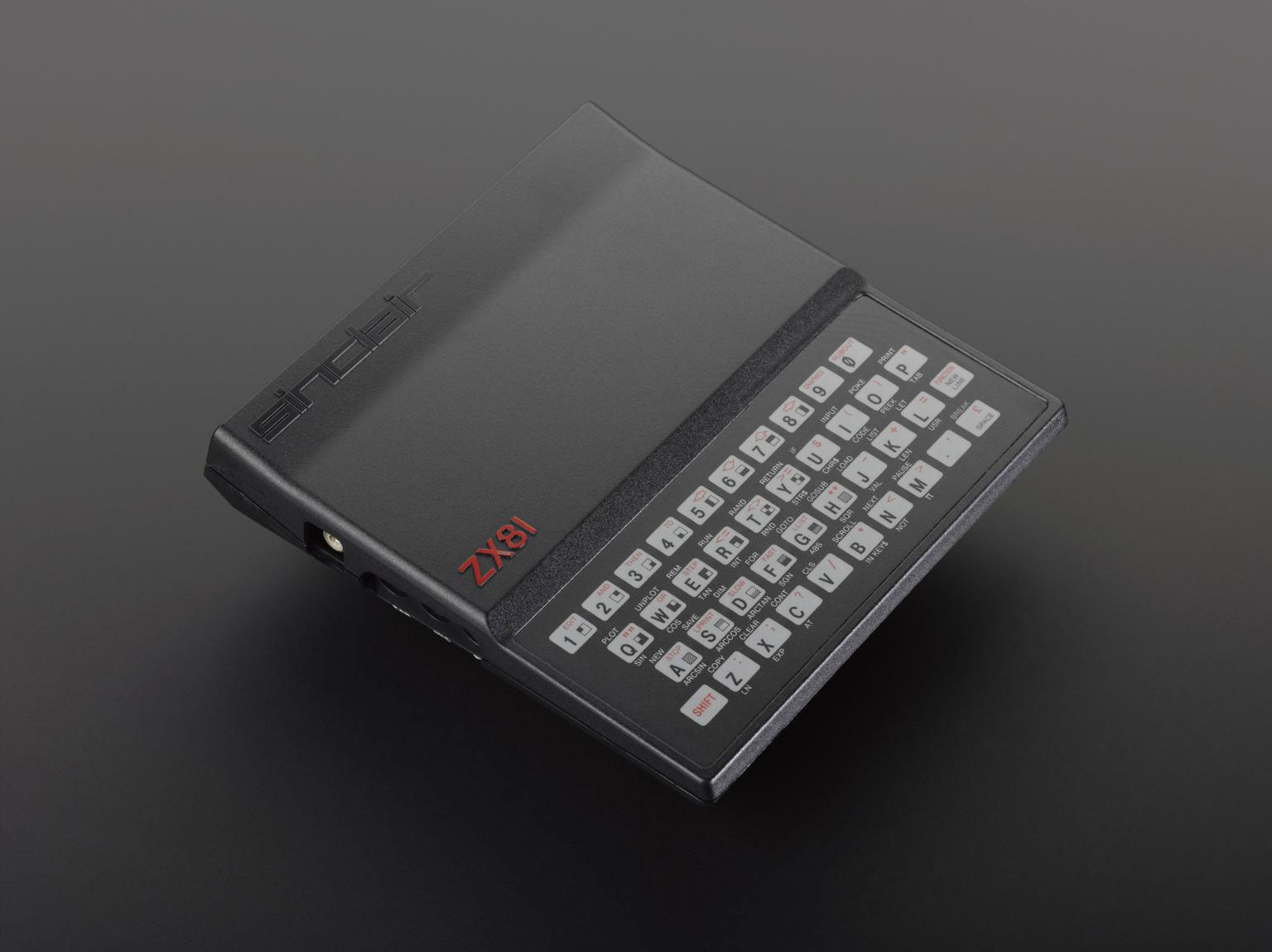 The successor to the famous ZX80 © The Board of Trustees of the Science Museum (CC BY-NC-SA 4.0)

Just a year after the success of the original Sinclair XZ80 – known to be the UK’s first affordable desktop computer, Clive Sinclair launched their follow-up machine, the ZX81. Not only improved technologically, the streamlined ZX81 also had a much-reduced price tag – consumers could pick one up for a little under £50.

Sinclair’s machines opened the world of computing to the masses, making it accessible to people from all backgrounds for the first time. With over 1.5 million of the ZX81 sold, it helped establish the UK as a leader in computer home ownership, earning the company its rightful place in the history books.

While today around 85% of the population carry far more powerful machines in their back pockets, the ZX81, a significant improvement on its predecessor, is a very early example of how quickly computing technology progresses. To compare these early machines to the technology we have access to today, the advances we have made over the past 40 years is staggering. 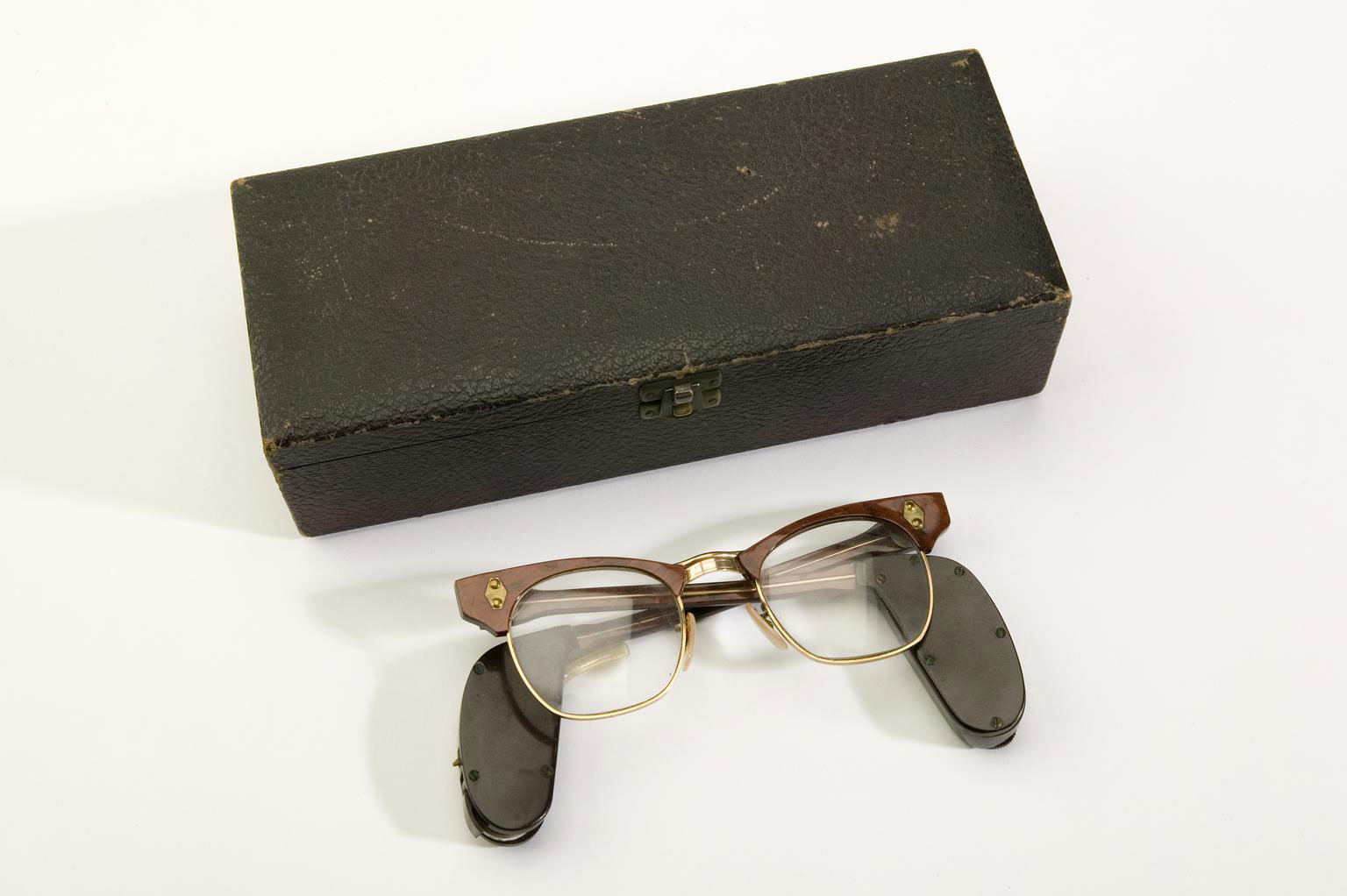 Two in one – a pair of hearing aid spectacles © The Board of Trustees of the Science Museum (CC BY-NC-SA 4.0)

The manufacturer of these spectacles, made in the middle of the 20th century, had the genius idea of combining two sensory aids in one. These stylish spectacles in an iconic 1950s design have hearing aids attached to the arms.

The first electronic hearing aid was invented 120 years ago, created by American engineer Miller Reese Hutchinson who wanted to help a friend who had gone deaf from contracting scarlet fever. These first machines offered a miraculous cure to the hard of hearing but their table top design was less than practical.

The hearing aid has been improved and downsized over the past 120 years, and in the 50s this more streamlined apparatus was created. Some companies are still making devices similar to these today, which use either the air or the bone to help conduct the sound waves through the skull to the ear. 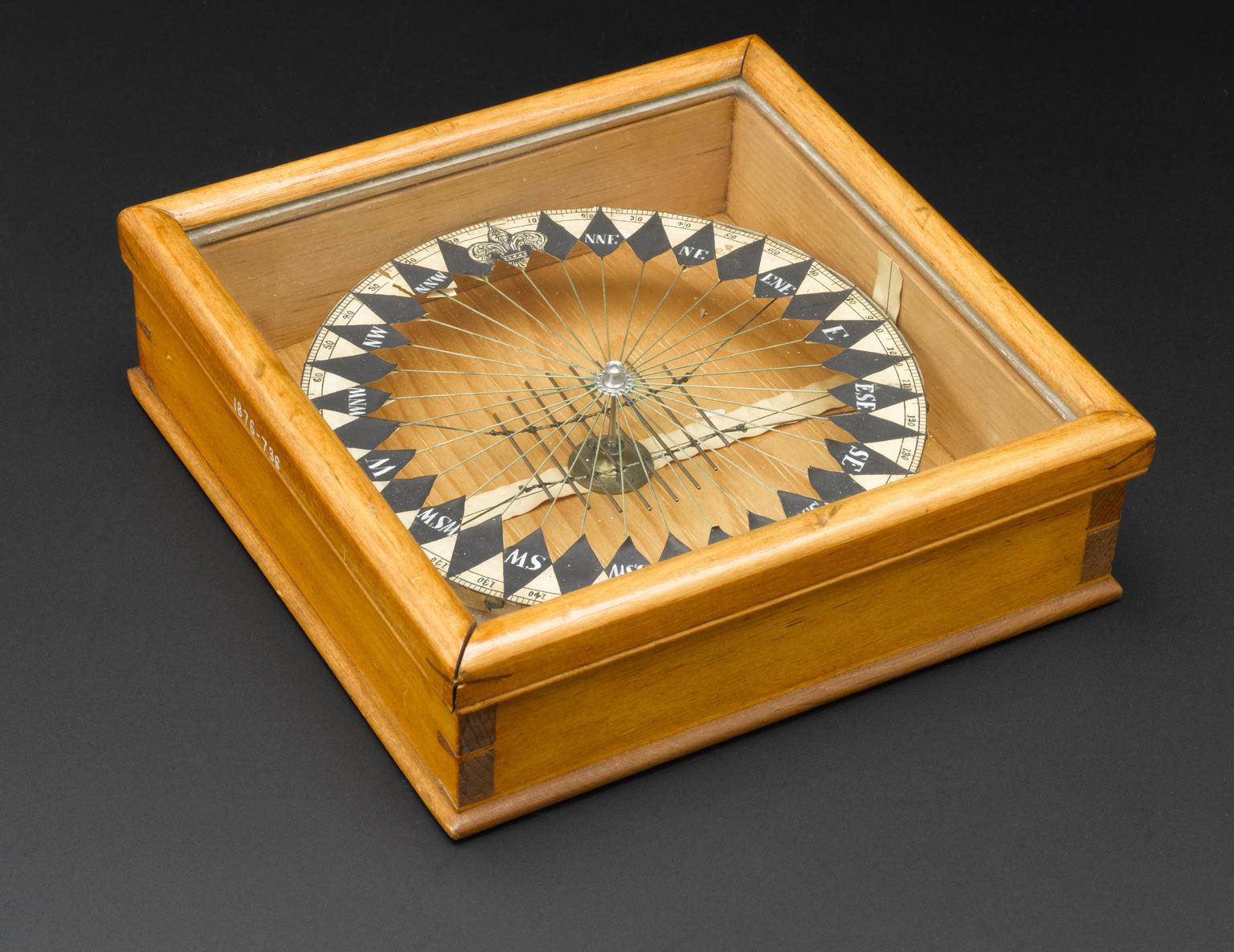 Lord Kelvin’s experimental compass © The Board of Trustees of the Science Museum (CC BY-NC-SA 4.0)

Donated to the Science Museum by Lord Kelvin himself, this rather odd-looking instrument formed part of his compass experiments of the late 1800s. A keen yachtsman, Kelvin strove to improve maritime safety and refine methods of navigation. We have him to thank for the maritime compass.

Kelvin spent years perfecting the compass design, resulting in his maritime compass, which was so successful it was used by the Admiralty until the adoption of the liquid compass in 1908. 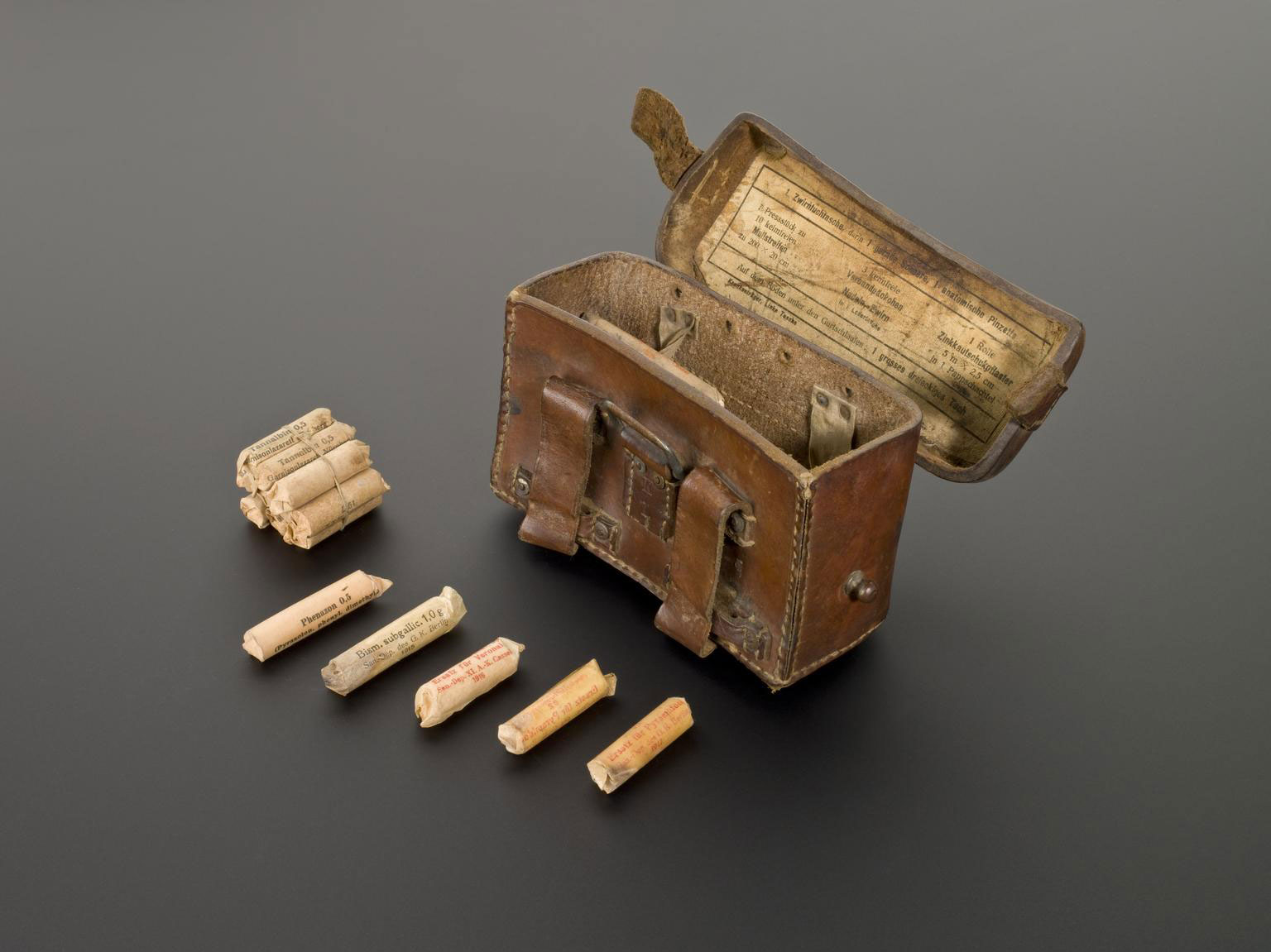 A First World War-era German medical pack © The Board of Trustees of the Science Museum (CC BY-NC-SA 4.0)

This neat leather medical pack would have been carried by a medic serving in the First World War. Containing several types of tablets packed in brown paper rolls, and a bandage, the leather satchel would have been worn around the belt.

It is thought to have been captured from an enemy battleship by British forces, possibly providing essential additional supplies to British troops. The pack’s contents include anti-sickness and anti-diarrhoea pills from a range of German medical stores. 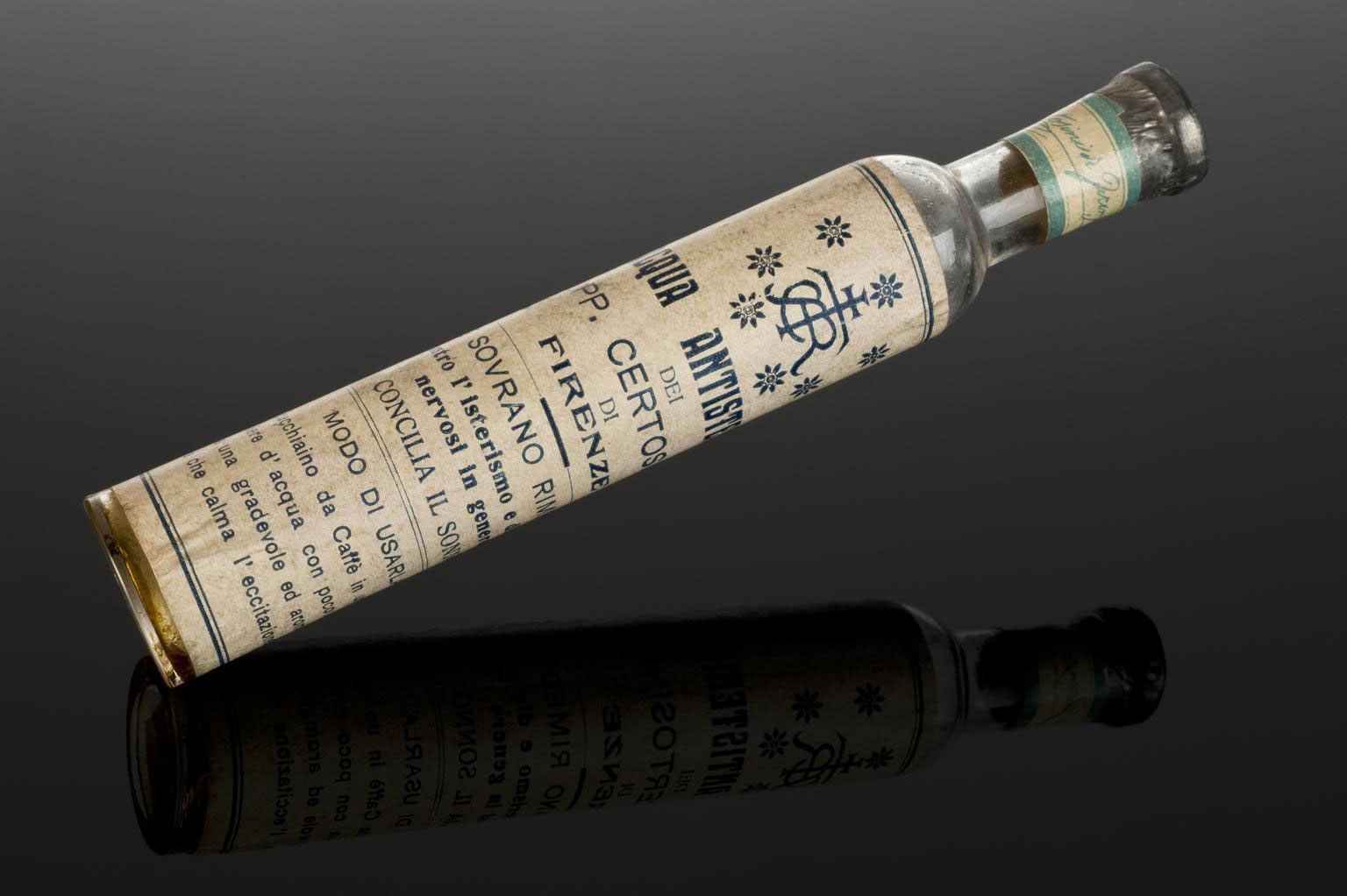 A bottle of Italian anti-hysteria water © The Board of Trustees of the Science Museum (CC BY-NC-SA 4.0)

This small bottle contains ‘aqua antisterica’ – a treatment for women showing signs of nervousness and over-excitation, made c1850-1920 at the pharmacy of the Carthusian Monastery near Florence.

From the middle ages most monasteries had their own pharmacies and would produce simple remedies and cures such as this ‘aromatic drink’ for sale to the public. This particular medicine promised to calm excitation when taken with a cup of coffee with a third of a cup of water, and a little sugar.

Hysteria was once a common diagnosis for women, a catch-all term applied to those experiencing a wide variety of symptoms, from nervousness to irritability to insomnia. In the middle ages physicians believed it was caused by a ‘wandering womb’, the theory being that the womb had the ability to move around the body, wreaking havoc with other organs. Thankfully, hysteria is no longer recognised as a medical disorder, the use of the catch-all term for women with difficult to diagnose problems dropped as medical diagnosis methods improved.

The Science Museum Group’s Random Object Generator serves up random pieces in the collection from a bank of more than 25,000 objects, with new items added each month. collection.sciencemuseum.org.uk/random