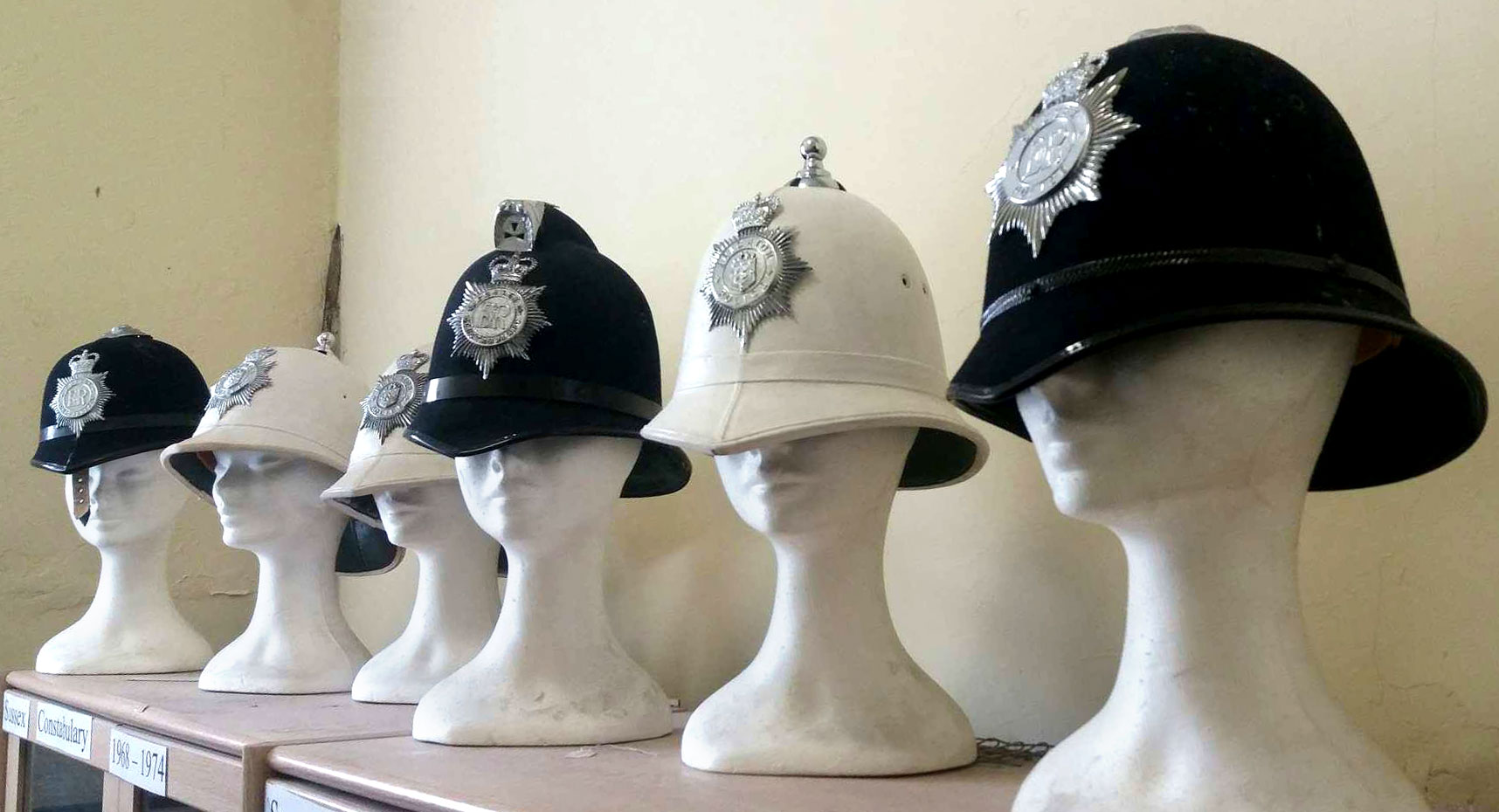 Brighton’s police service is one with a famous, or rather infamous, reputation – a reputation captured in the headgear they wore.

First introduced in 1933, police white helmets soon became the hallmark of Brighton’s police force, distinguishing the city from the rest of the national service, although the white gloves they also used have been historically forgotten.

“The high collar is a throwback to older days. When I was in the military we used to refer to marines as boot-necks, because they used to have a high-stock down the neck,” he says.

Brighton police also differed from the other police because of the blue wrist protector they used to place on their wrist while they were on duty, which was black in all other parts of the country apart from London, where it was red.

“Sussex police are unusual because they’re the only police service that I’ve found that were given three helmets,” Lynch-White claims.

“You had this helmet with a silver badge, for the day time. The same helmet with a black badge, for night time, because you didn’t want to be seen… and of course, in the summer, a white helmet.”

The white helmets were made of cork, which was said to be much preferred by the officers because of the lightness of the material.

They were first put into use in the summer because of the abundance of tourists that would travel down from Brighton.

White gloves were also used by the Brighton police force alongside the helmets in order to ease their identification.

Due to the difficulty in spotting officers in a crowd, the council decided to give the police white helmets for summer use in order to assist the public in their exploration of the city. “We still don’t have many tourist information centres in Brighton,” says Lynch-White.

“You walked twenty miles a day and expected to be attacked by members of the public at any time.”

Hove police also possessed a straw hat that was intended for use in summer.

“[There’s a] little straw-hat there just to show you how different Hove can be, or thought it could be,” says Lynch-White as he gives the helmet a knock, “and that was a summer helmet for Hove Police. “Didn’t last long, it melted in the rain.”

Lynch-White explains the daily life of a Brighton officer in 1839: “Your working hours were eight, ten or twelve hours a day, no rest breaks allowed, one week’s holiday a year unpaid.

“You walked twenty miles a day, no meal breaks were allowed. Your ‘snackers’ were kept under your hat. Uniform worn at all times, you must not gossip with the public and so on and so on…

“You expected to be attacked by members of the public at any time.” 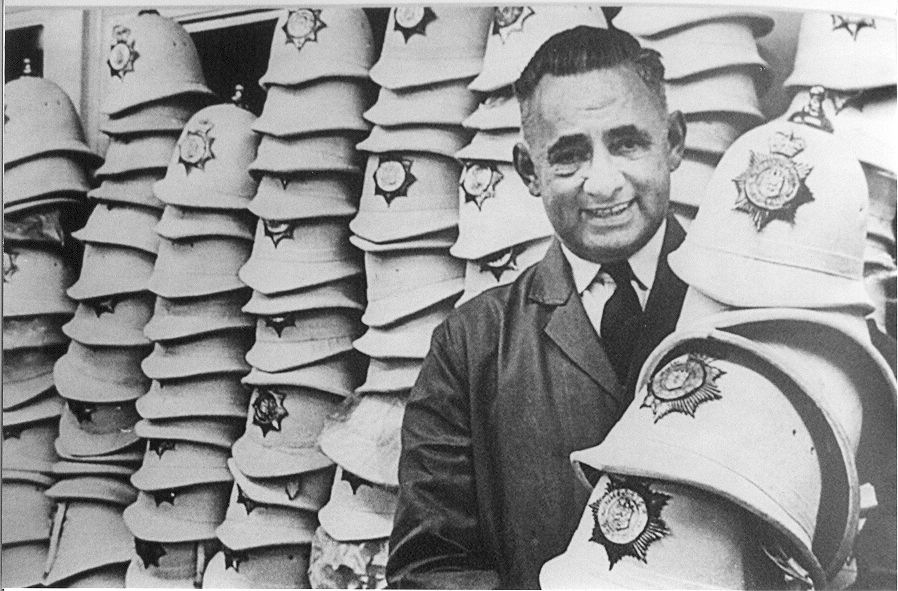 Asked why people would take on such an onerous role, he says: “If you think about it in 1839, a lot of people were very poor. At least in the police, and in the military, you got a regular wage every week.”

Towards the back of the old cells museum, one of the black helmets displays a distinguishable coxcomb that sits comfortable atop the head.

This coxcomb was used to distinguish officers as a fire-serviceman, as Brighton had its own fire-service after 1921. Their duties would eventually be taken over by the national fire service created in 1941.

The Brighton police service is also famous, or infamous, in other ways.

“It was the first police service in the world to have a police radio and people came from all over the world to listen to it,” says Lynch-White. “Unfortunately, it could only go one way. The desk officer here could ring his constable at the beach but he couldn’t reply.” 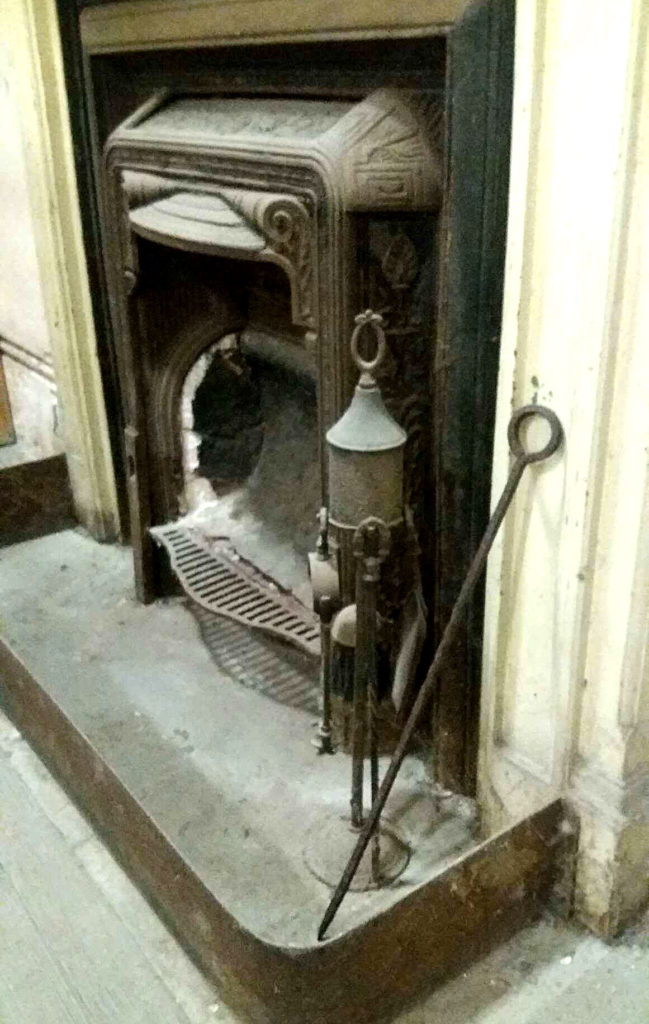 Scene of the crime – the fateful fireplace. Photo: Tom Brown

In 1844, he interviewed a man called John Lawrence, in those days the Chief Constable personally interviewed every criminal brought before him.

As was usual, he interviewed John Lawrence in front of the fireplace, to ask him why he had stolen a carpet from a shop in St James’ Street.

For reasons unknown, Lawrence picked up the fireplace poker, hit him on the head, and killed him.

“We’ll never know why, I mean stealing a carpet in those days probably may not have been a hanging offence but it was certainly transportation for life, and perhaps he didn’t want to go to Australia.”

He was of course arrested and taken to Lewes court, sentenced to death and taken to Horsham jail. His hanging was the last hanging open to the public in Sussex.

The white helmets fell out of use in 1967, when Brighton police amalgamated with the rest of the police force.

Access to the Old Police Cells is by tour only. Tours are available all year. See below for more details.

The Old Police Cells Museum is housed in the basement of Brighton Town Hall and offers visitors a unique insight into the history of policing in Sussex and is both educational and entertaining. It provides an opportunity to visit Brighton Borough main police station for the period 1830 to 1967…

One comment on “Headgear and homicide: Inside the Old Police Cells Museum”