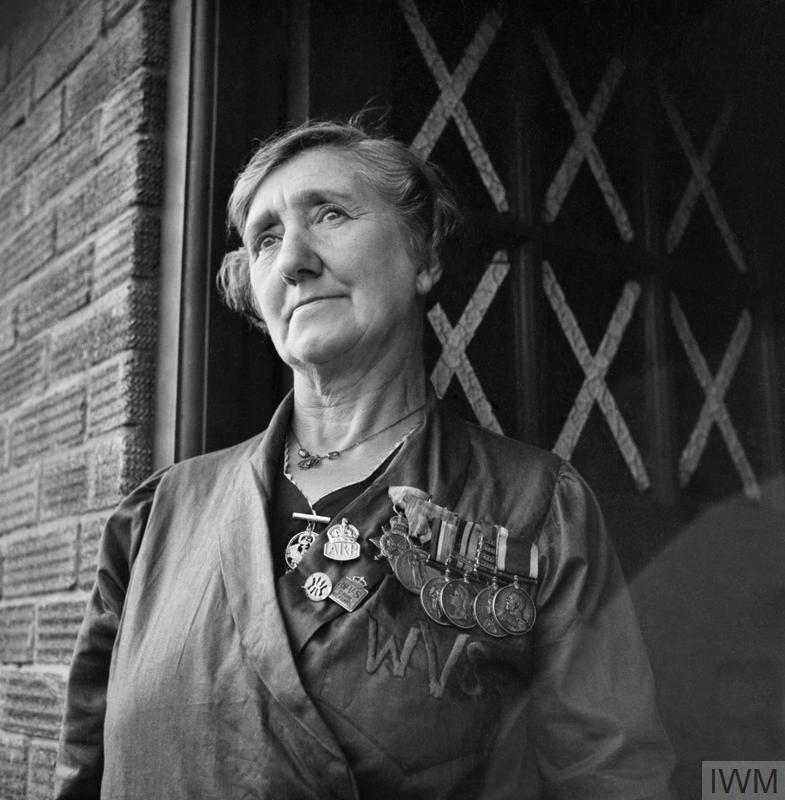 Mrs Redmond of Orford in Suffolk wearing her late husband’s medals. She was also a member of various Civil Defence organisations, including the WVS, as can be seen from the overall and badges she is wearing.© IWM

Established by the Dowager Marchioness of Reading in 1938 to fully engage women in the role of civil defence during World War Two, at its height 960,000 women were involved in the Women’s Voluntary Service, working alongside local authority personnel and the Air Raid Precautions Service.

Their work became vital to the war effort on the home front, with women from all walks of life volunteering to undertake a range of duties – from the collection of green waste in “pig bins” and the co-ordination of metal salvage to the running mobile canteens and rest centres in the blitz-torn streets of Britain.

The project to reveal the stories of this army of volunteers, The Hidden Histories of a Million Wartime Women, launched a fundraising campaign on the crowdfunding site Kickstarter in early May 2016. It caught the public imagination who helped the project hit its £25,000 target. The digitisation of thousands of diary entries, which were awarded UNESCO UK Memory of the World status in 2010, is now under way.

More than 300,000 pages of digitised diary entries will tell stories of everyday heroism by female volunteers from more than 2,000 cities, towns and villages across Great Britain at a time when one in 10 women in Britain was a member of the WVS.

Salvage workers from the Women’s Voluntary Service in East Barnet, Hertfordshire, during 1943, carrying bins containing kitchen scraps that will be distributed to local farmers as food for pigs. © IWM (D 14251)

Women of the Women’s Voluntary Service (WVS) stand alongside the mobile canteen donated to Britain by the people of Montserrat. The WVS are running the canteen on behalf of the Ministry of Food. © IWM (D 3119)

The Archive and Heritage Collection team at the Royal Voluntary Service will begin by digitising the first 28,000 pages – covering 1938 to 1941.

“For six years we have been sorting, protecting and preserving tens of thousands of pieces of fragile paper to get to a point where we can start to capture and share these remarkable stories with everyone,” says Matthew McMurray, the service’s Archivist.

“Those million women, the army that Hitler forgot, were pivotal in the allied victory in the Second World War, but their efforts have almost completely been forgotten.”

McMurray has spent the past 10 years working to turn what was a very large pile of boxes in a self-storage warehouse into a collection that is available to everyone.

One example report reveals how a volunteer from Bath cleaned an array of children’s gas masks. The accompanying narrative describes a particularly busy month for the Bath Centre following a major Blitz on the city between 28 and 29 April 1941, with volunteers fitting 80 children with masks and issuing 205 helmets for babies. The centre was also responsible for serving 3,350 meals and helped coordinate housing for more than 9,000 people made homeless following the raids. 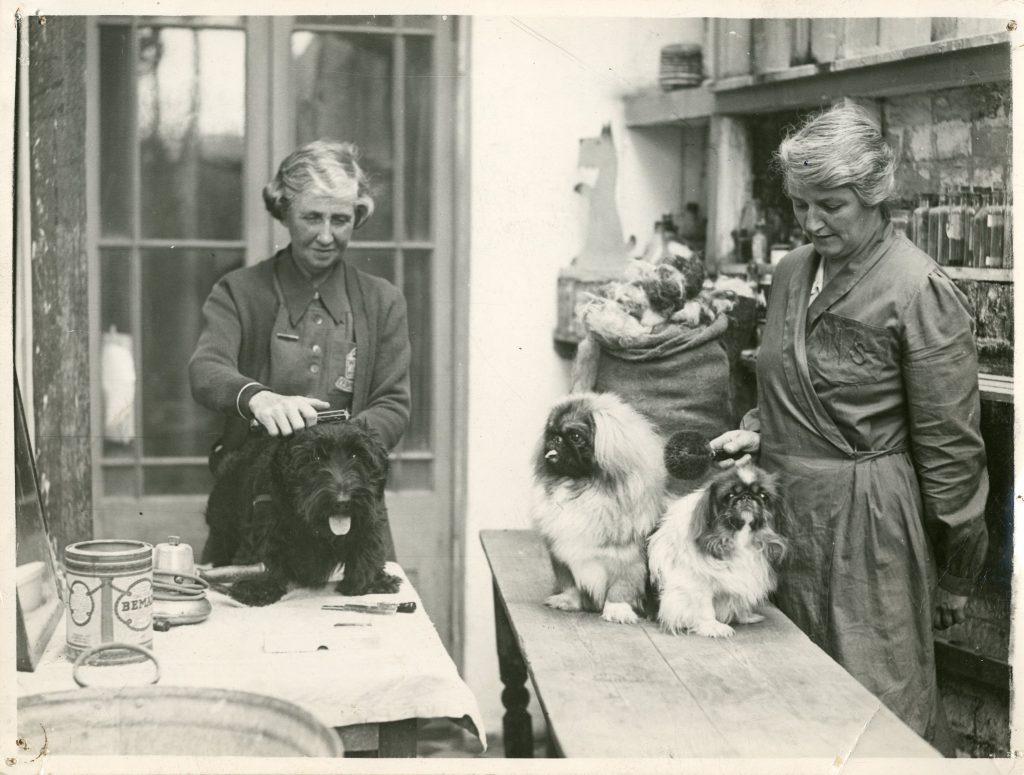 A member of the Women’s Voluntary Service cuts strips of green and khaki sacking into lengths in preparation for the production of camouflage nets at an old school building in London. © IWM (D 17199)

Three women, including a member of the Women’s Voluntary Service (WVS), speak to information officers in the rehousing and billeting department of the East Ham Information Bureau. © IWM (D 3226)

Another more unusual entry, from Portsmouth in November 1943, details how the Centre’s “dog hair expert” attended a special demonstration day at Harrods. The training session taught volunteers how to salvage fur from dog grooming and spin it into a “warm and hardwearing” alternative to wool. The entry remarks how Portsmouth’s contributions were highly praised at the event, which was organised at the request of the Board of Trade.

“We want to be able to share these tales of everyday heroism and those million ordinary women who made the difference and reveal the Hidden Histories of A Million Wartime Women.”

Today the WVS successor’s, the Royal Voluntary Service focuses its work on helping older people to remain independent and get more out of life. It now supports more than 100,000 older people each month to stay independent in their own homes for longer running services such as Good Neighbours (companionship), Meals-on-Wheels and Books-on-Wheels and other projects that alleviate loneliness and help older people.

Royal Voluntary Service also provides practical support for older people who have been in hospital through its On Ward Befriending and Home from Hospital services and via its network of retail shops and cafes.

Patience ‘Boo’ Brand serves tea to a shelterer from the WVS canteen, as an ARP warden drinks his tea, a bun in his hand, under the awning of the canteen. Rachel Bingham is also working behind the counter, pouring tea from an urn into a mug. All refreshments are sold to the shelterers at cost price, and the WVS makes no profit. © IWM (D 2152) 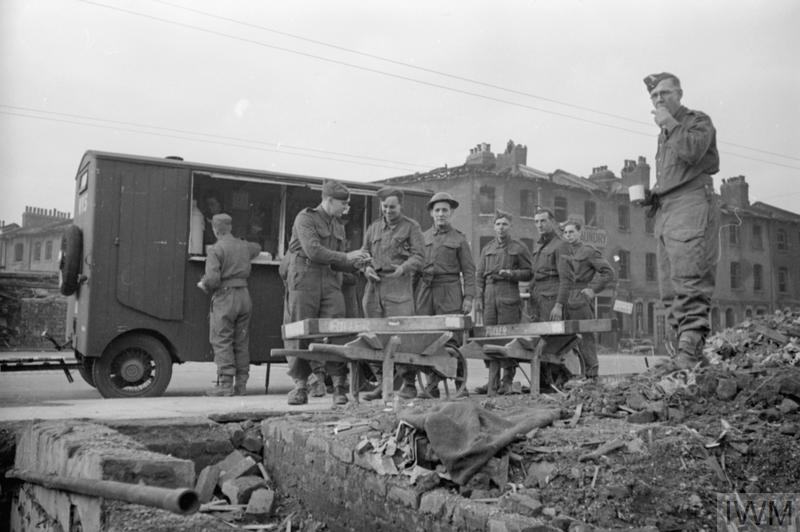 Men of the Pioneer Corps eat buns and drink tea alongside a WVS canteen during their midday day break on a bomb site, somewhere in London. Copyright: © IWM. 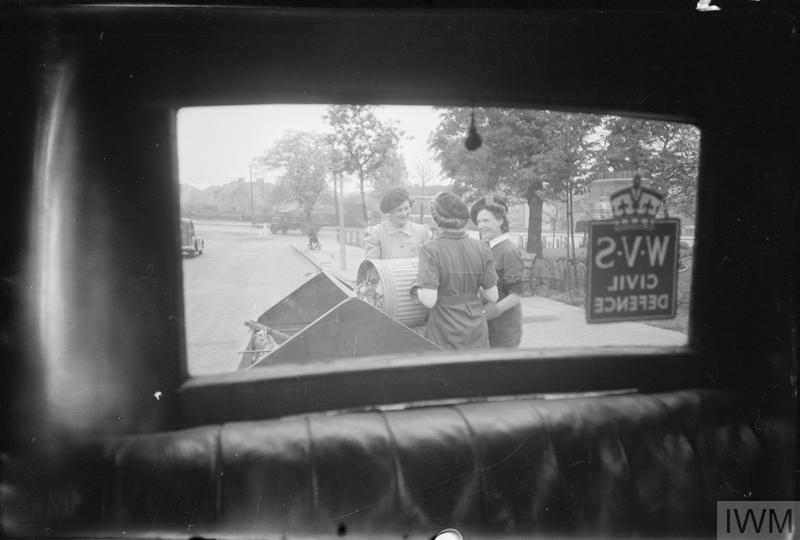 A view through the rear window of the WVS pig collection unit car, as members of the East Barnet unit empty a pig bin into the trailer. Left to right they are: Kathleen Kent (head of the unit), Miss Winifred Jordan (back to camera) and Mrs Gerald De Rivaz. Copyright: © IWM.