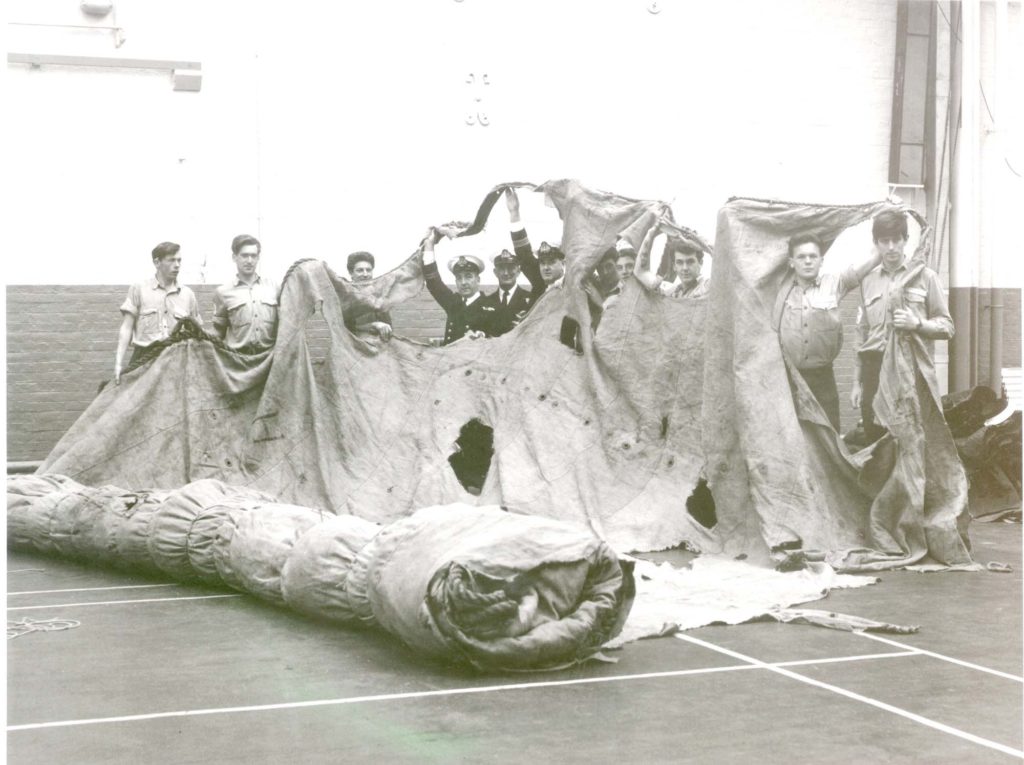 The sail from HMS Victory when rediscovered in the late 1960s.

Spanning the equivalent of two tennis courts when fully laid out, this sail – a rare survivor from Lord Nelson’s flagship, HMS Victory and its famous engagement at the Battle of Trafalgar in 1805, measures 80 feet at its foot, 54 feet at the head and is 54 feet deep.

It has lain unseen for the last six years, but now HMS Victory’s Trafalgar Sail, the only surviving foretopsail from the famous Napoleonic naval battle when the Royal Navy defeated the combined fleets of the French and Spanish Navies, is on display for a limited time this summer.

Laid out it in The National Museum of the Royal Navy’s Storehouse 10 in Portsmouth Historic Dockyard, it covers an area of 3,618 feet. And as visitors will see for themselves, it is pock-marked by some 90 shot holes – battle scars that pay tribute to the ferocity of the day on October 21st 1805, when Vice-Admiral Lord Nelson was fatally wounded.

Yet for such a venerable British naval artefact the sail has had a chequered history, remaining on board HMS Victory until it was removed and then placed in the sail loft when the ship returned to Chatham for repairs in January 1806. 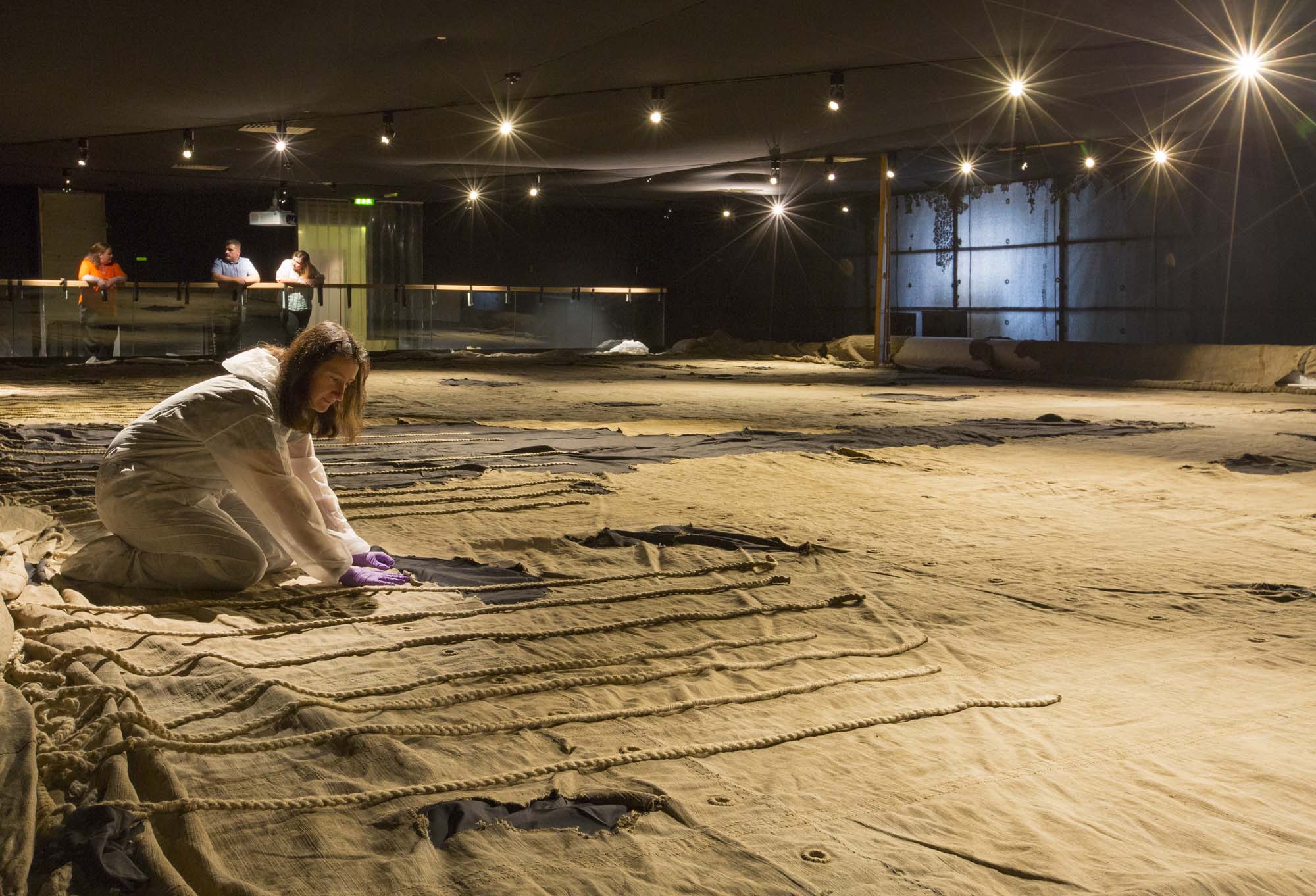 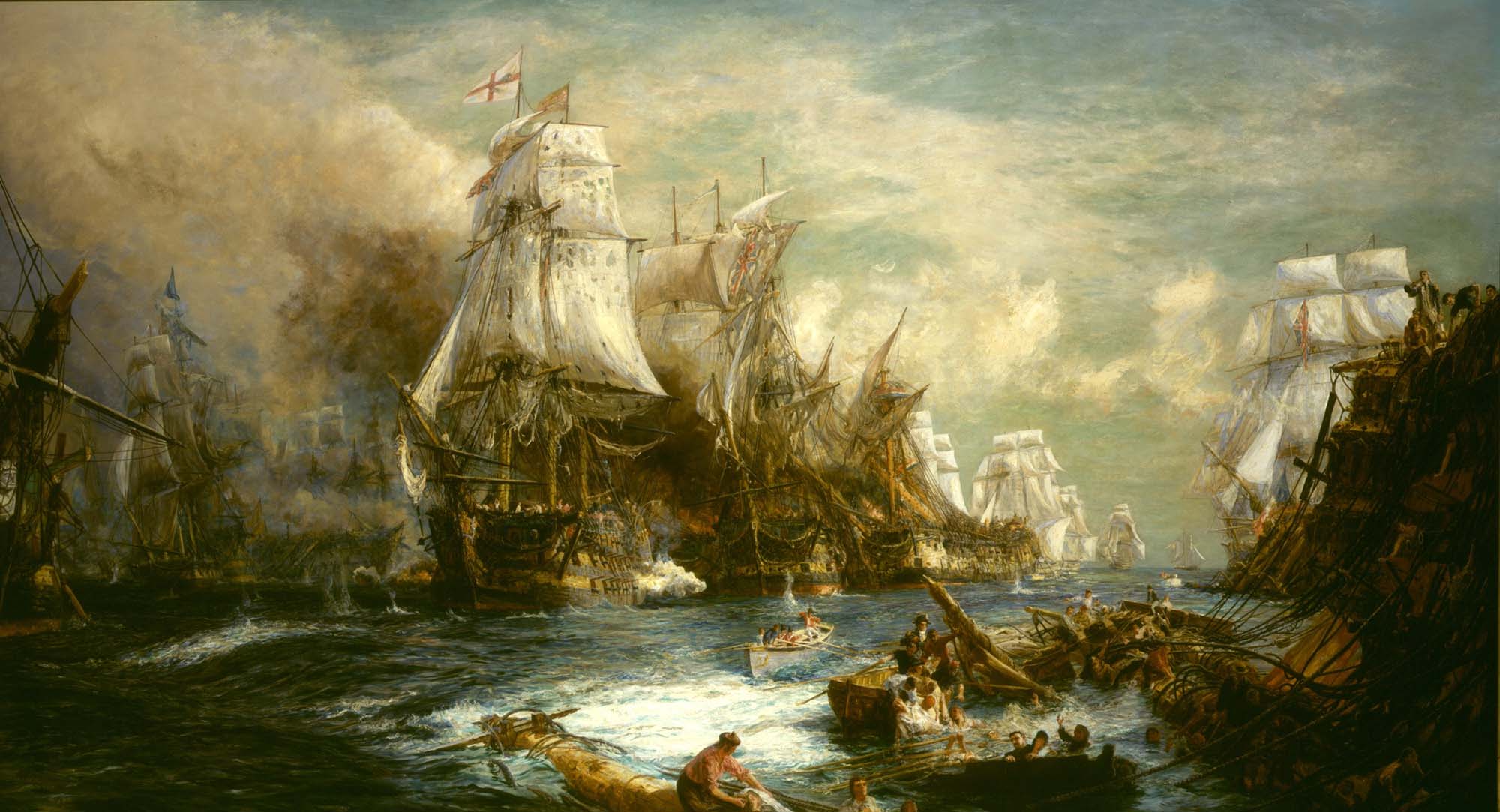 For the next century its whereabouts are somewhat obscure. Large painted letters stating “Victory’s Topsail” suggest it was displayed at some time and latterly returned to the ship for the centenary of Trafalgar in 1905.

Following HMS Victory’s berthing in No. 2 dock in Portsmouth Naval Base in 1922, the sail was again removed and many years later rediscovered in the gymnasium in the Royal Naval Barracks – HMS Victory (HMS Nelson today.) It was then returned to the ship in 1967.

It was extensively conserved and displayed for the bicentenary of Trafalgar in 2005.

“When the sail was first displayed during the Battle of Trafalgar centenary it had undergone considerable conservation by the Textile Conservation Centre at the University of Southampton,” says Diana McCormack, Senior Conservator at The National Museum of the Royal Navy.

“The conservation steps taken include placing the sail in an environmentally controlled space. A team of six textile conservators were involved in the cleaning programme. The sail itself was heavily soiled and under an electron microscope contaminants could be seen to have razor-like edges that were capable of abrading the sail fibres. The removal of the fibres was achieved by low suction vacuum cleaning and by gentle mechanical action.

“Our job now is to prevent any further deterioration because the fibres are sensitive to shrinking and warping or fading if the conditions are wrong. And to find a way to put the sail on permanent display so its story of incredible survival can be shared by visitors.” 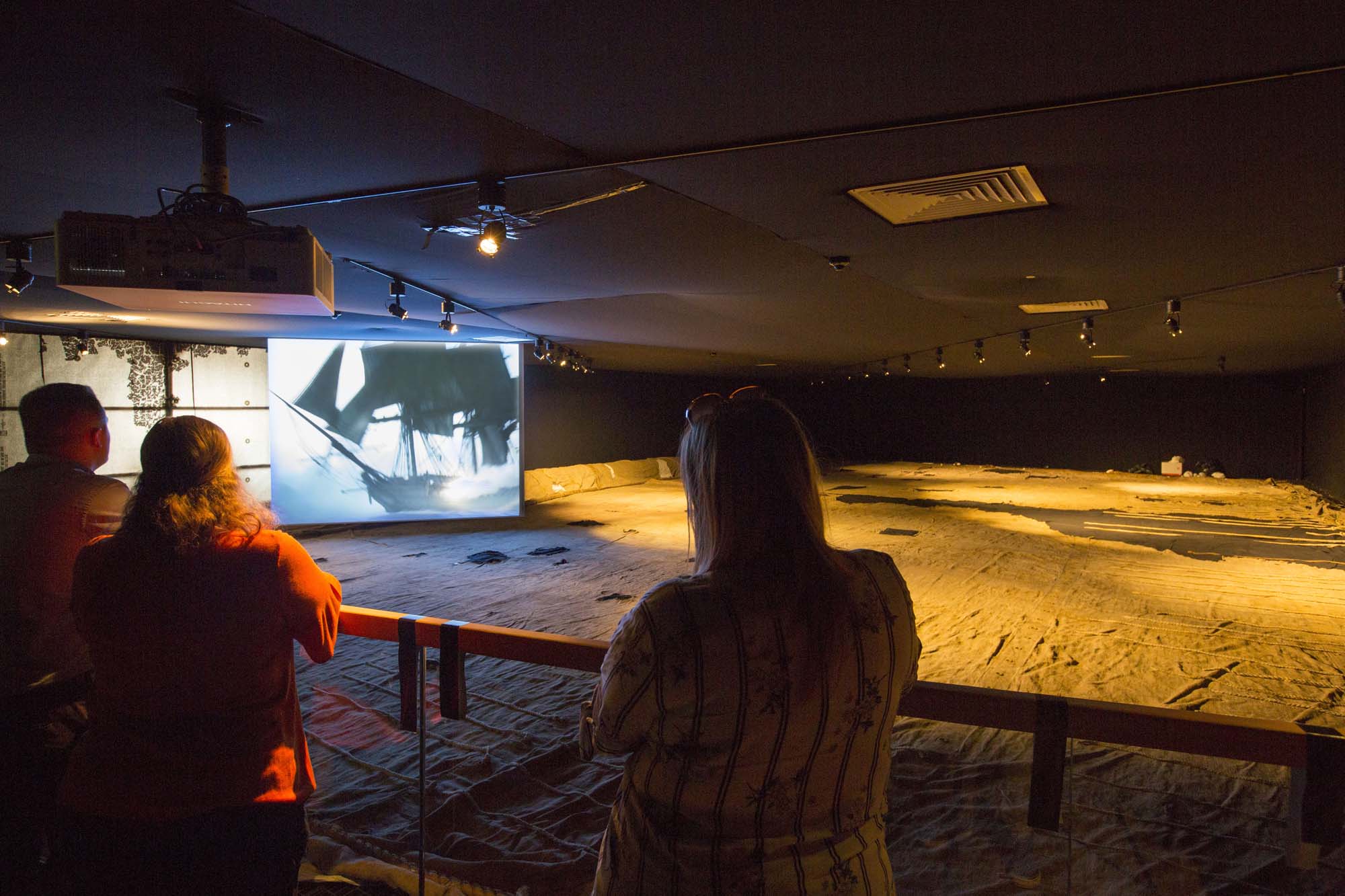 The Trafalgar Sail from HMS Victory on limited display at Portsmouth Historic Dockyard.

Describing HMS Victory, Nelson and the Battle of Trafalgar as “key to our history”, Mathew Sheldon, who is the museum’s Director of Heritage, added, “The sail is an amazing object, scarred by battle and like HMS Victory herself, a proud survivor of an iconic battle.

“But it is also a vast handmade object from Georgian times that required great skill and knowledge to create it. Seeing it is a real treat and will be a highlight for the summer.”

The sail is now laid flat and accompanied by a short audio and lighting presentation featuring footage from the popular film Master and Commander.

Entry to the Trafalgar Sail is part of the Portsmouth Historic Dockyard Full Navy Ticket available on www.historicdockyard.co.uk which costs from £31 per adult with under 16s free during the summer holidays and valid for multiple entries throughout the year. Book online to save 20%.