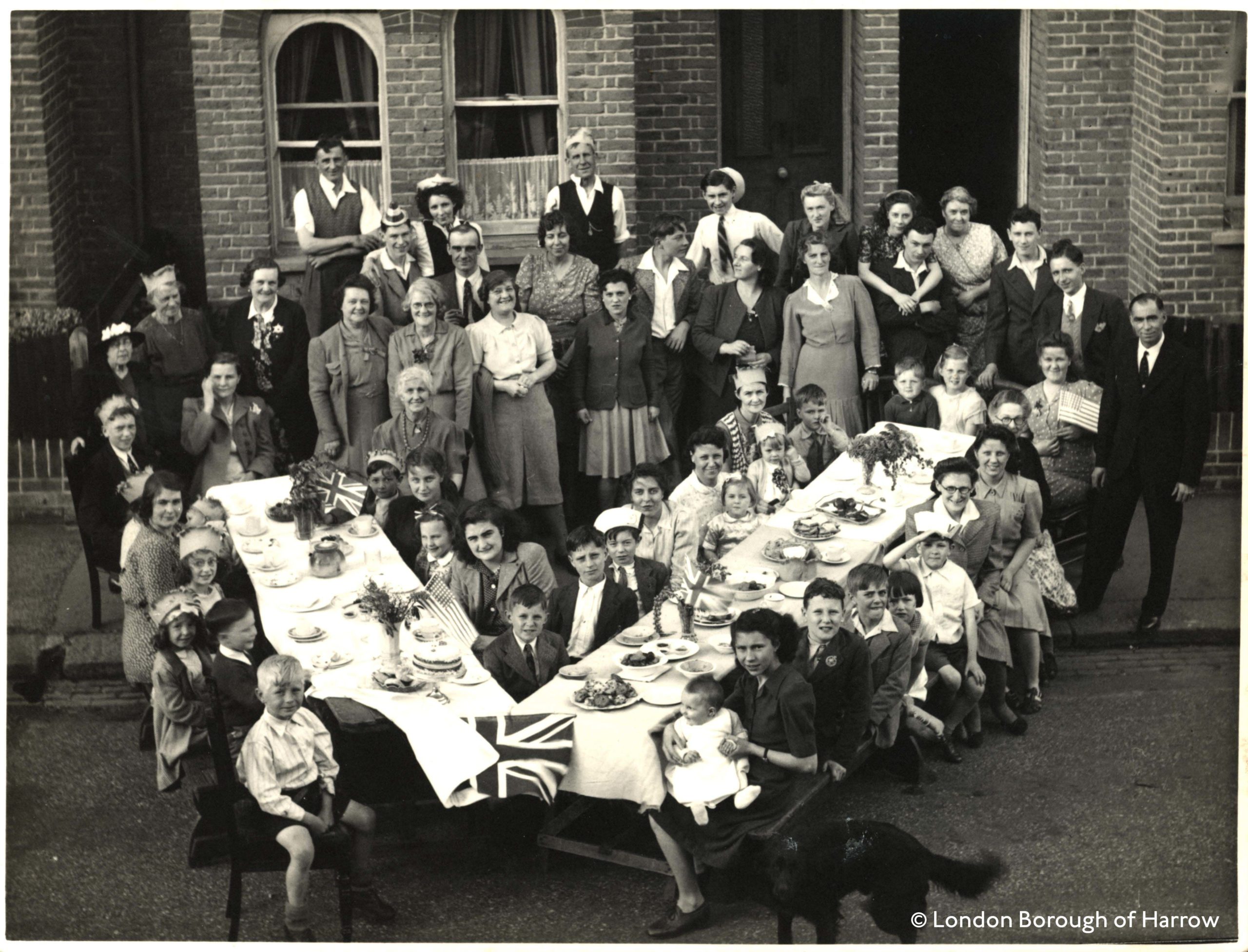 Stacey Anne Bagdi, Collections & Exhibitions Officer (Curator) at Headstone Manor and Museum in Harrow shares some of the stories of VE Day collected from locals who were there

On May 7 1945, the nation tuned in to the announcement that war was over in Europe and the U.K. was given two public holidays in order to celebrate. The first of these days, May 8 1945, is known as VE Day. Crowds of people gathered outside Buckingham Palace, whilst others gathered on their streets celebrating Britain’s Victory.

In Harrow, the Council formed a Victory Celebrations Committee. Celebrations in Harrow in 1945 were recorded in The Villager, a publication produced by the Pinner Association:

“The Council’s Victory Celebrations held in Headstone Manor Recreation Ground on the second day of the VE holiday had to be prepared at very short notice and produced an enormous bonfire as the main attraction”.

The Villager goes on to describe the atmosphere in Pinner, Harrow:

“An Oasis of light and colour, amplified by the surrounding darkness brought a touch of fairyland to the top end of the High Street during V-E Day celebrations. The floodlighting of the Church and the flags suspended across the road, with coloured lights on the neighbouring buildings to add to the gaiety of the scene, provided as delightful a spectacle as any to be seen those nights”.

Harrow Council’s main celebration were organised for 1946. The committee spent in total £2,972 18s. 7d that is equivalent to £105,692.09 today. Activities were planned for the people of Harrow including midnight entertainments at local cinemas and a number of ‘Old People’s Tea Parties’. A larger sports and entertainment event took place at Headstone Manor Recreation Ground from 8 – 10 June; with Punch and Judy shows and open-air dancing.

This year, we decided to launch a VE Day project and exhibition together with an oral history project with supported training from The Oral History Society, and through this, we conducted nine new oral history interviews from members of our community.

From the success of our roadshows and the call out, we have collected an additional 11 new written memories and 14 new VE Day images. In order to display these new memories, we commissioned a London based film editor to create a film and commemorative book to display in the exhibition.

In addition to the contributions from the Harrow community,, we also approached Harrow’s cultural institutions, including The William Heath Robinson Museum, The Old Speech Room Gallery and Harrow School Archive and they have loaned us an additional 21 images from their collections for the exhibition.

The exhibition at Headstone Manor & Museum, titled ‘Peace at Last: Victory Days in Harrow’ aims to highlights aspects of a post-war Britain on the home-front in Harrow. Using memories from those who experienced it, or those who moved into Harrow after 1945, the exhibition creates a window into the past through the interpretation process of storytelling.

Michael Pearce, born in April 1938, grew up on Yeading Avenue in the area generally known at the time as Roxbourne, Harrow. As a young child during the war, Michael remembers hearing air-raids:

For Michael, aged 7 in 1945, VE Day was full of excitement and relief:

“VE day made us all feel full of joy. The knowledge that the war was over and there would be no more bombing or threat of being conquered by the Nazis was paramount. At school we were all presented with a certificate containing a personal message to boys and girls from King George VI, which I still possess.

“The street parties, where we celebrated with neighbours, were great fun with banners and tables laden with all sorts of goodies that were usually only served on birthdays. A special entertainment afternoon was also held at a pub on Field End Road called The Clay Pigeon with lots of party food and entertainers. Life was suddenly full of light and happiness…”

Michael Pearce recently wrote a book highlighting some of his memories of Harrow during the war, “When Bombs Fell on Roxbourne” is available to purchase on Amazon. 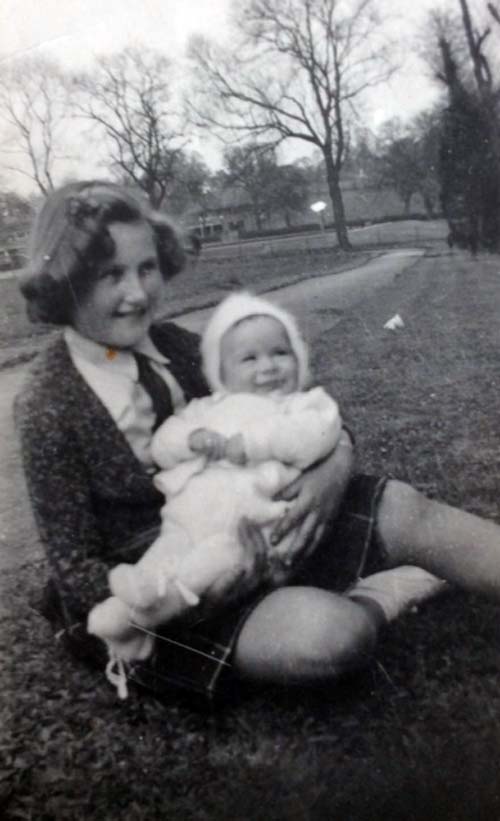 Peter Bayliss as a baby.

Born in 1940, Peter was aged five when the war ended. Here he recalls how VE Day felt to a young child living in Harrow:

“I do remember kitchen tables and chairs being carried down to the street and set up. And I remember plates piled high with food – sandwiches and cakes made by all the mums and pooled to make a gigantic feast…Long hoarded goodies were taken from secret stashes – in our case from the back of the wardrobe…

“Out came the jam, ﬁsh paste, corned beef, sugar for cakes, and the much maligned spam. When it was all over the tables and chairs were recovered and the bonﬁre built for the VE night celebrations. Now was time for the grown-up celebrations.” 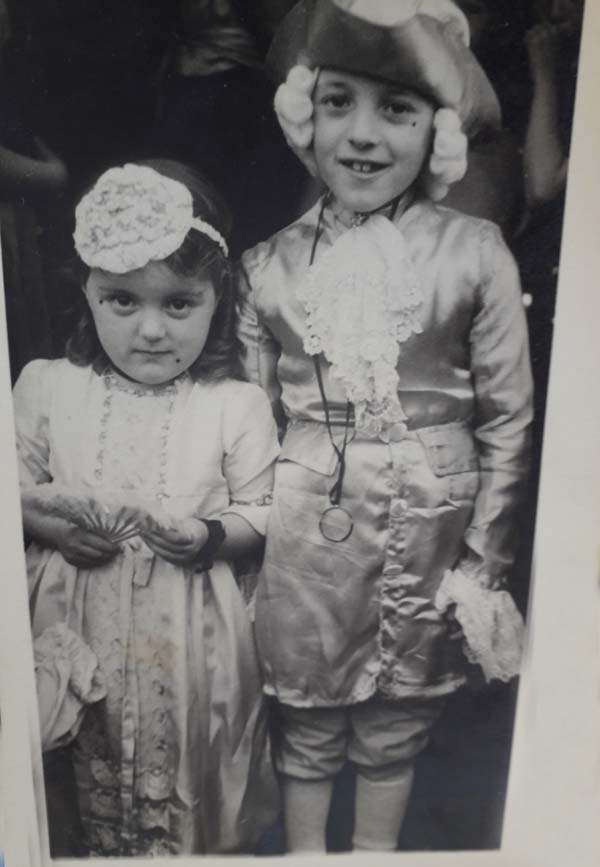 “This photo was taken in Hamilton crescent South Harrow on VE day. I was only 3 & half so don’t remember a lot. I know there were tables all set out on the big green in front of the houses. All the children were dressed up put on the back of a lorry with small Union Jacks & we were driven round the whole estate to wave at everyone.

“Then we had tea & there was a bonfire with Hitler sitting on the top…we all saw him burn. [Our] costumes were made of pale green silk” 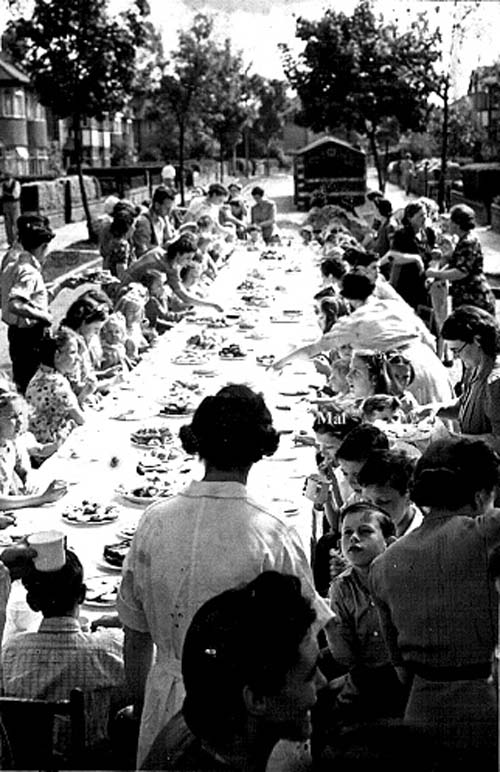 A young Malcolm Hutton sitting at a VE Day street party in Harrow, 1945

“I was taken up to town by Dad and Mum. I can remember and always will the tremendous crush in the middle of so many people outside Buck Palace.

“I was lifted up for a moment or two to see the King and Queen come out on to the balcony, and then the mad rush – carried along in the crush… I do not think our Street Party could have been the same day. I’m sure it was around lunch time, when we would still have been in the City on the day itself.” 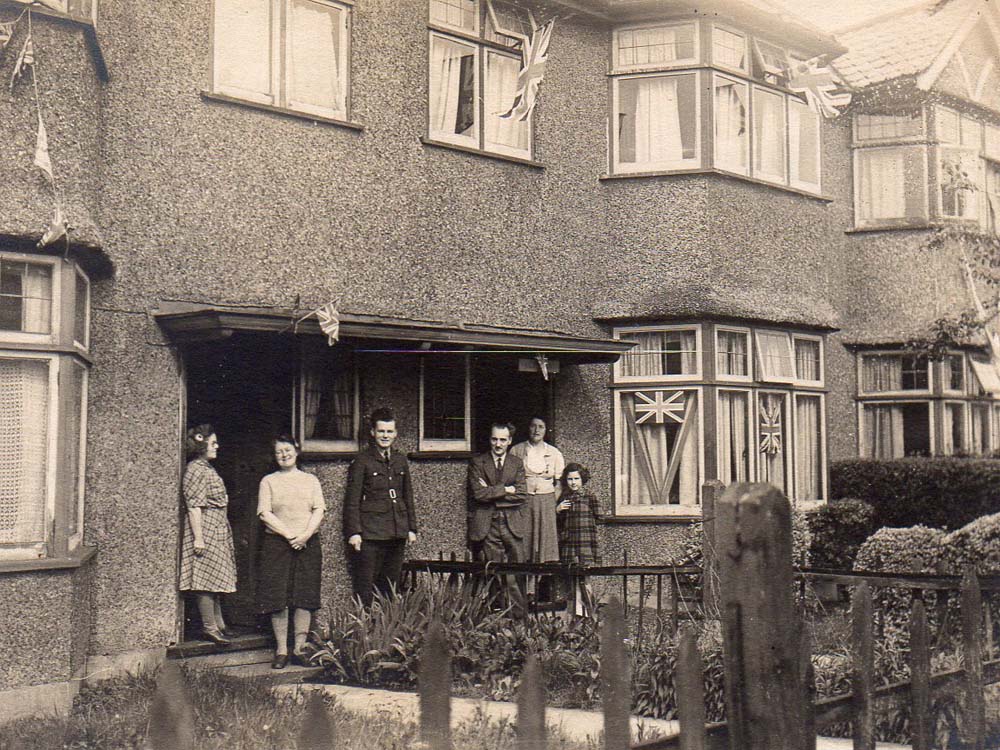 Joseph and Elsie Bell with their daughter, Claudia, standing outside their home in St.Paul’s Avenue, Kenton. Image kindly sent in by Caroline Bell, niece of Claudia Bell.

“The photo shows (on the right) my grandparents, Joseph and Elsie Bell with their daughter, Claudia, standing outside their home at 17, St.Paul’s Avenue, Kenton. My grandparents moved into the house in 1930 and shortly after this found that there wasn’t a concrete base under the foundations and that the flooring kept getting very damp.

“Nan recalled how the lino was coming up in bits because it was so damp and the furniture was going through the floor boards. By 1945, they had replaced the floorboards and the old ones were used to light a bonfire in the street on VE day when there was a party.”

Due to the current Coronavirus situation, all planned VE Day events, including the exhibition, have been postponed and the exhibition has been pushed back to open on Tuesday, July 21 2020, although this date is still under review. So to mark the 75th Anniversary on May 8 2020, we will take our commemorative efforts online via our social media channels and website.

This year’s celebration is even more poignant due to the global situation and here in Harrow we hope to be a beacon of hope for our residents and share our messages of support, good health, and wellbeing across the nation. Much as Britain looked to the future in the post-war years so will we look to the future as we overcome our current challenge.

To find out more about Headstone Manor & Museum, visit: headstonemanor.org