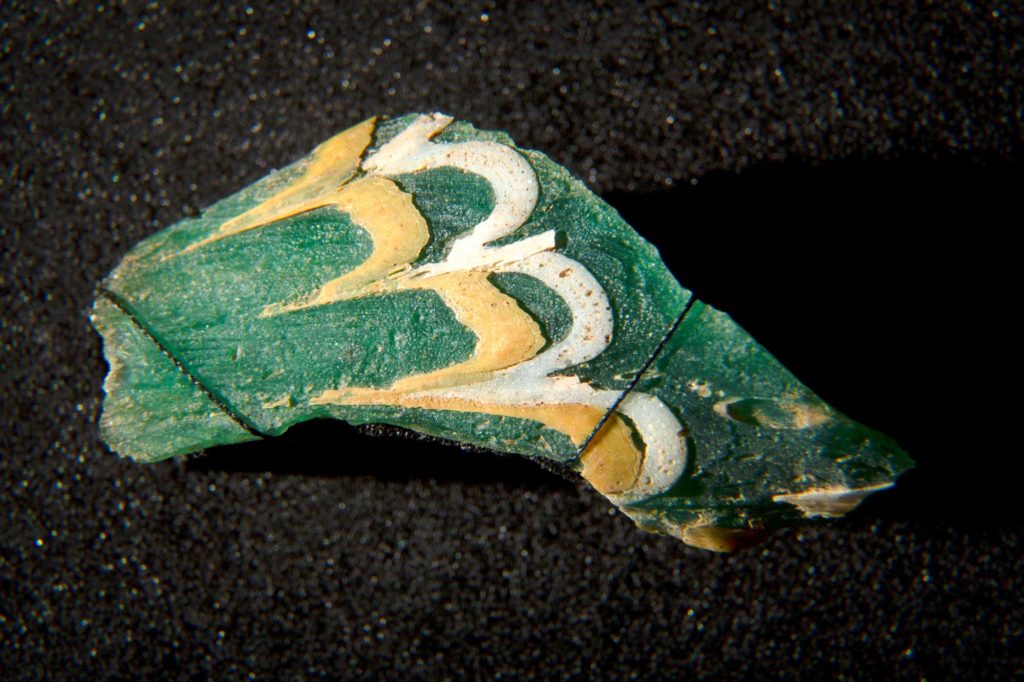 A fragment of an 1,800 year-old glass fish, the only one of its type ever discovered in Britain, has been found by the National Trust at Chedworth Roman Villa near Cirencester in Gloucestershire.

Sometimes in archaeology it’s the smallest finds that reveal the biggest insights – the grain of corn, the finger ring, the arrowhead.

At Chedworth Roman Villa in Gloucestershire they are celebrating the discovery of a small, glass fragment no bigger than a child’s thumb, but which experts agree is part of an 1,800 year-old glass fish, the only one of its type ever discovered in Britain.

Archaeologists say the find, which is so rare it took glass experts around the world two years to identify it, sheds new light on the wealth and influence of those who imported it from the Black Sea more than a millennium ago.

The shard of blue-green glass with an unusual fish scale pattern has been identified as coming from a fish-shaped bottle imported from what is now Ukraine and may have been used to hold exotic perfume.

Although found in the summer of 2017 it has taken until now to identify the type of bottle the fragment came from because of its exceptional rarity. 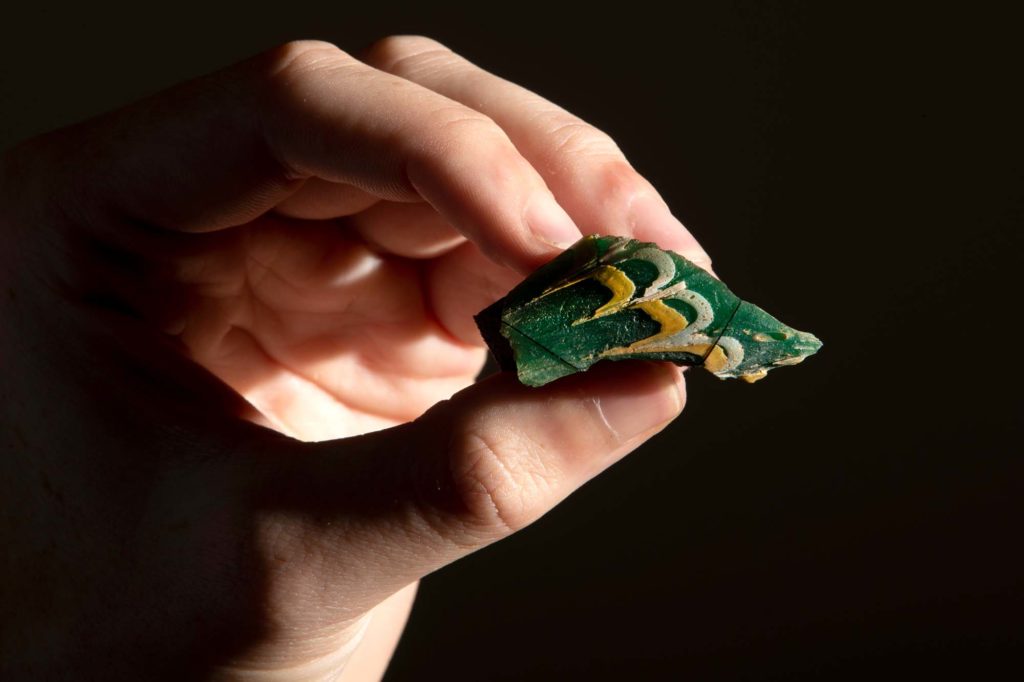 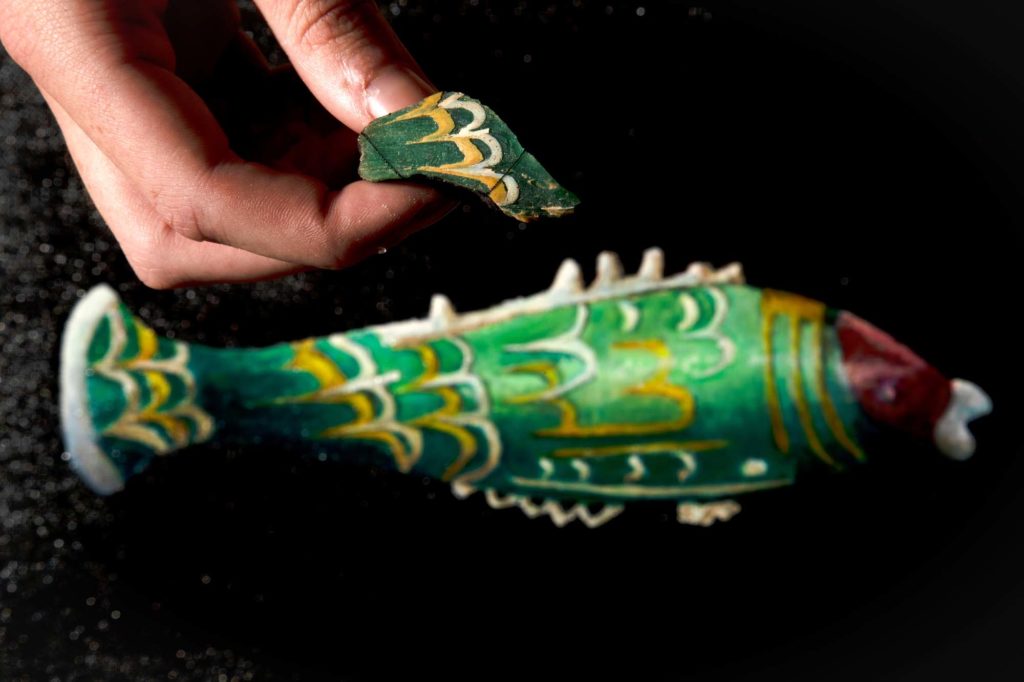 The fragment above an artist’s impression of how the fish bottle would have looked.

The leading Roman glass expert, the late Professor Jennifer Price, sought advice from other glass experts across the world before the mystery was solved.

The glass was blown by hand with a distinctive profile showing that it came from a long bottle with an oval shape and a sharp taper at the end. It was likely a small flask with the fish’s open mouth forming the aperture of the vessel.

Professor Price eventually found it matched a fish-shaped bottle that had been restored from many pieces, at the Corning Museum of Glass in New York. By comparing the two examples, she concluded the Chedworth piece came from near the ‘tail’ of the fish bottle.

The only other example of such a fish-shaped Roman bottle comes from a 2nd-century burial in Crimea. The technique used to make it was unusual, with decoration laid on top of the blue-green surface to create ‘scales’ in loops of white and yellow. It was more common to incorporate different colours into the body of the vessel itself.

“People have been enchanted by it, but it has also been a long and difficult journey,” says Nancy Grace, the National Trust archaeologist who led the detective work to investigate the find. “To have found that it is the only one of its type so far discovered in Roman Britain adds to our knowledge of the importance of Chedworth Roman Villa.

“Other objects found at the villa show it was home to somebody of wealth and status. That such an exotic thing was brought from so far away underlines that the occupants were in touch with the furthest regions of the Roman Empire and wanted to show off that influence.

“It is amazing that a small fragment has told us so much. This find shows there is still more for Chedworth to tell us about Roman life in this corner of Gloucestershire.” 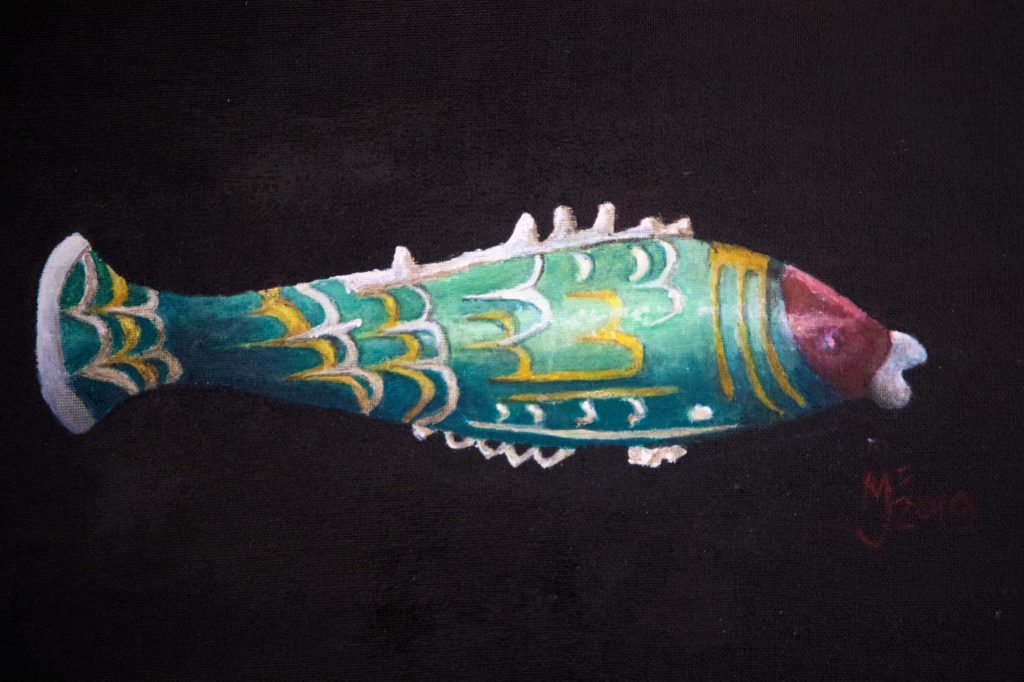 Artist’s impression of how the fish bottle would have looked. 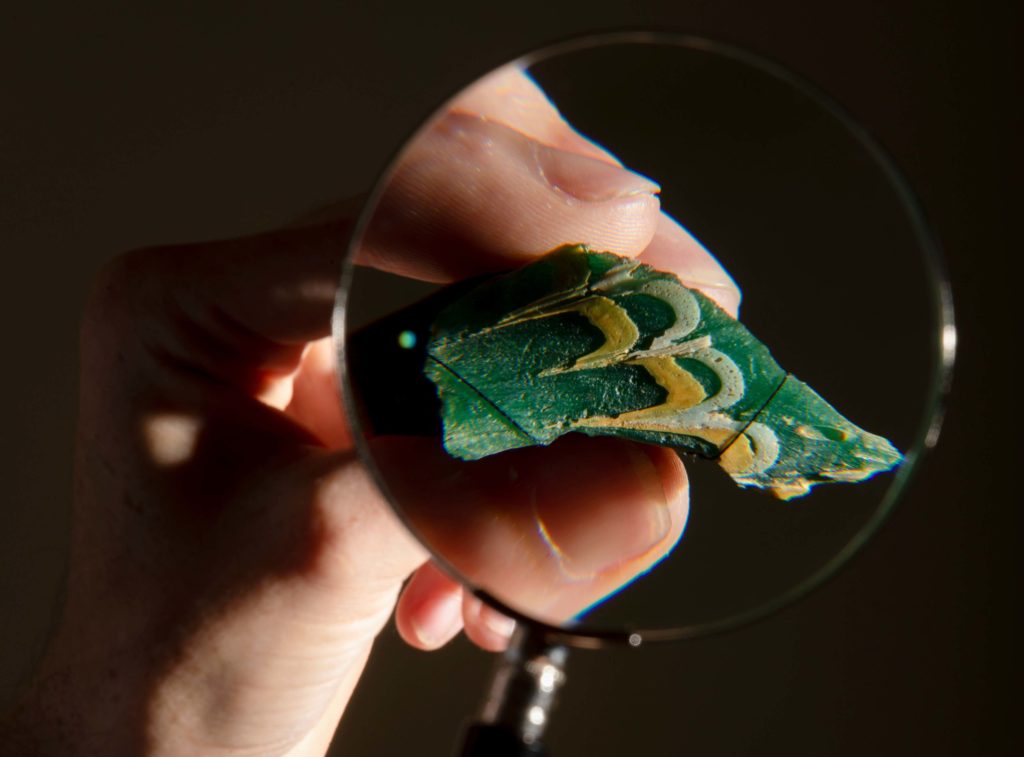 The 1,800 year-old glass fish fragment under the microscope.

The bottle fragment was found by Peter Moore, an archaeologist and masters student at the University of York who was helping with a dig to understand more about the north wing of the villa.

Describing its discovery as “incredibly humbling”, Peter says, “excavating anything at Chedworth and knowing that you are the first person to gaze upon it for at least 1,800 years is a feeling that never tires, the memory of recovering this piece of glass certainly will not.”

The fragment has gone on display at the villa as part of the Festival of Archaeology (until 28 July) and will remain on display throughout summer.

The remains of one of the largest Roman villas in Britain provide a fascinating insight into the period. The site was discovered in 1864 by a local gamekeeper and subsequently excavated. Over a mile of walls survive along with beautiful mosaics, two bathhouses, hypocausts, a water shrine and latrine. Visitors…