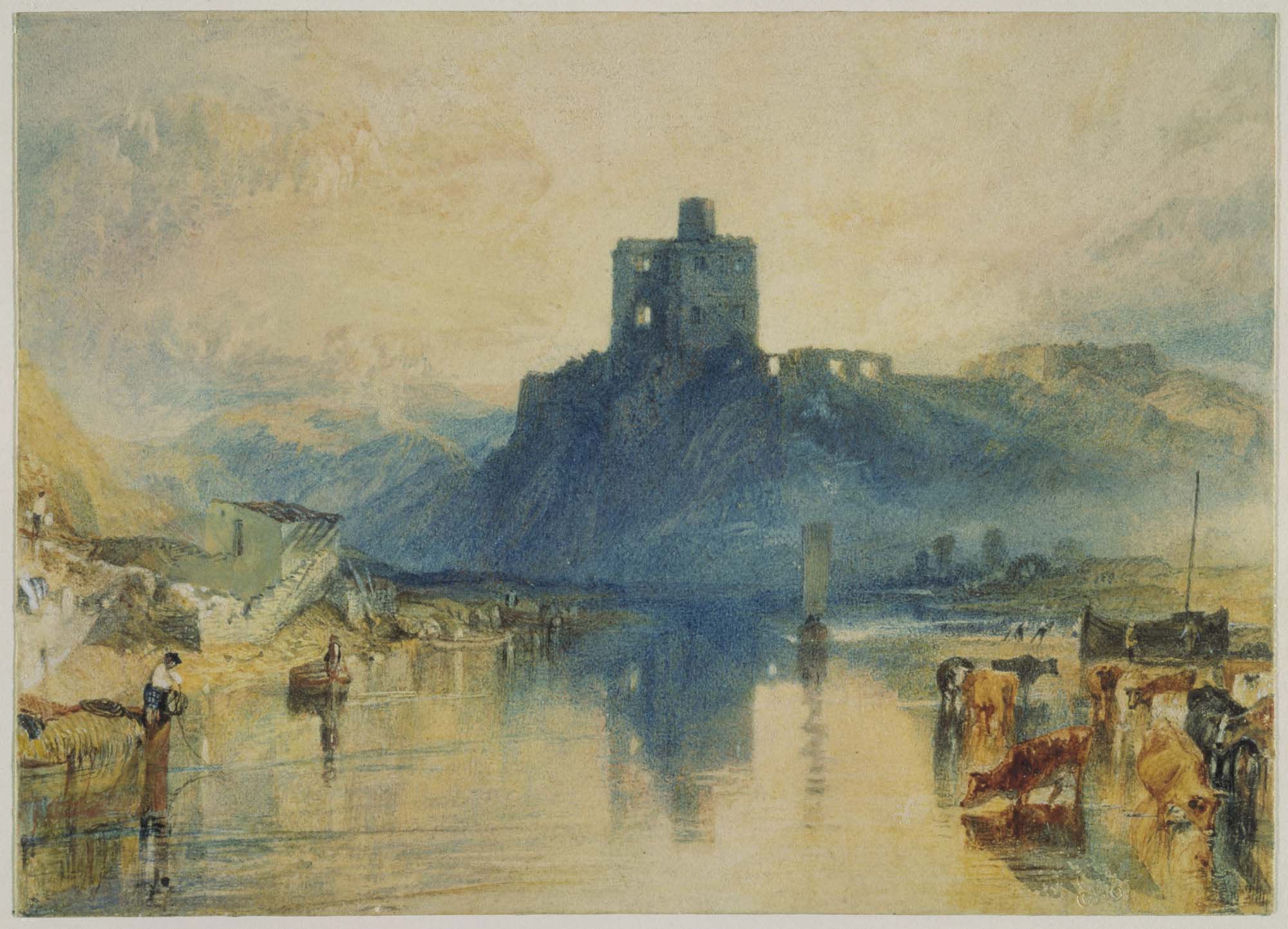 In 1797, aged just 22, JMW Turner set off on his first tour of the north of England, spending three months sketching in Northumberland, the Lake District and Yorkshire.

The young painter had already begun to produce his first brooding oils for the Royal Academy (having entered the Academy as a 14-year-old probationer in 1789), and he was now plying his trade as an architectural draughtsman specialising in sketches of abbeys and castles in places like Tintern, Malmesbury and Westminster.

By now he was also relatively well travelled, having traversed the West Midlands and negotiated Bristol and South Wales for his sketches, and for this first journey northwards he was intent on visiting the abbeys, castles and cathedrals that were his bread and butter.

But this time something different happened, which according to this new exhibition in Northumberland turned him into the landscape painter he’s famous for being today. Turner: Northern Exposure represents the highlights of the young artist’s route, and explores the effects of his exposure to the northern landscapes across his subsequent career. In effect it’s an argument that says Turner’s northern sojourn transformed him into a poet of the landscape sublime, and armed him with sketchbooks full of the subjects that he returned to again and again throughout his life. 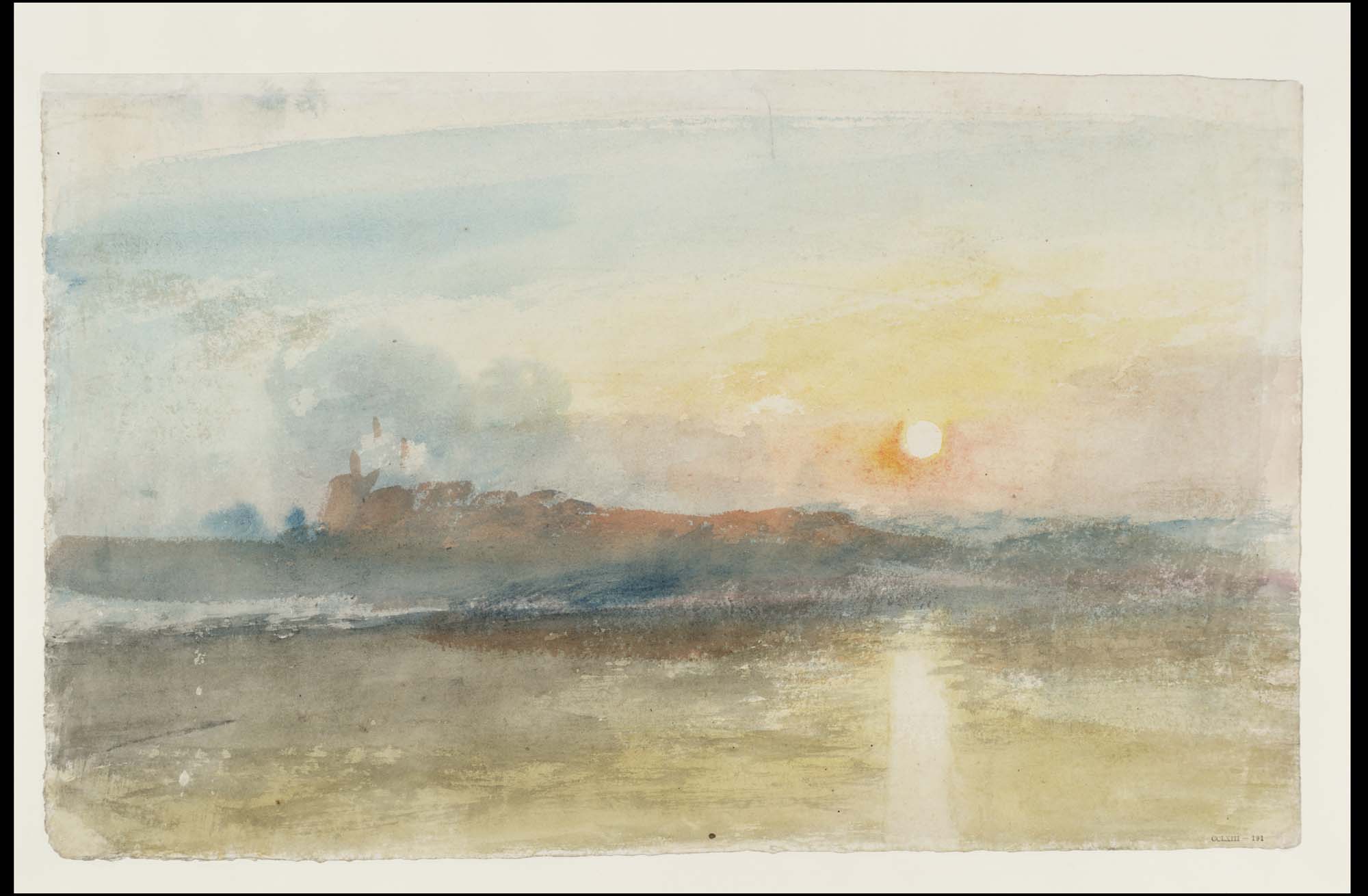 “It’s crucially formative in his early career,” says Professor David Hill, who is the Curatorial Advisor for the exhibition. “It opens up the possibility of the sublime in landscape.”

“When Turner made his tour of 1797, most of the places he visited were little-known to a wider public. Turner’s pictures of these places were in themselves pioneering, but Turner added a new dimension; that of the sense of his actually being there. Each is a sensory experience in itself. So Turner did not just represent the appearance of places, but also the experience of them.”

Turner covered over a thousand miles on his northern journey, staying in humble taverns and coaching inns, and sketching and painting furiously to develop a portfolio of images.

And, says Hill, the resulting sketch books were important tools that he used wisely.

“They’re very luxurious sketchbooks for a young and still relatively impecunious artist,” says Hill. “They’re full, big and leather bound with elaborate brass clasps all around them to keep them closed. One of them has a little frame in the inside of the front cover, a little window mount that must have had at some stage a finished sample.”

These luxuriously fashioned sketchbooks were passed around his patrons – some of them the leading aristocratic artistic patrons of the day – and Turner invited them to choose subjects from the sketches.

“There’s a list in one of them of the subjects that various patrons had selected,” adds Hill. “So these sketchbooks and the sketches in them were designed to impress.”

The paintings are designed to offer insight into Turner’s remarkable memory and visual recollection, but the sketches in particular demonstrate his awareness of the weather and its changing impact on how he depicted each landscape.

But is there evidence inside them of the spark that turned him into the sublime artist of atmosphere and landscape that we revere today? 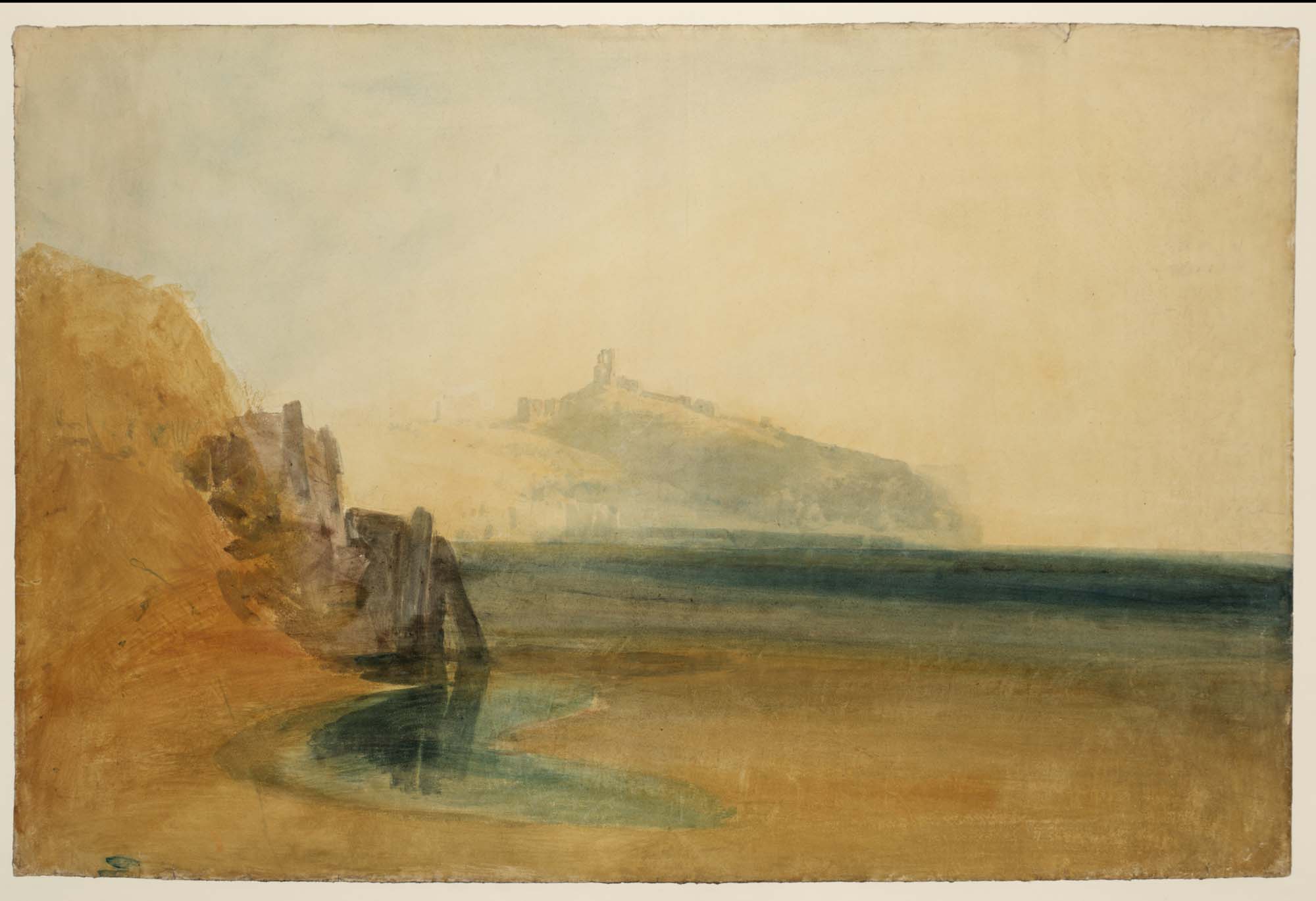 “Oh there certainly is,” says Hall, “but we also have Turner’s own testimony for it. He came back on occasion to the north, finally in 1831 when he was in his mid-fifties and had been commissioned to illustrate the works of Sir Walter Scott and went to Abbotsford to see him.

“His most northerly subject on the 1797 tour was Norham Castle on the Tweed, which isn’t far from Abbotsford and as he was travelling past there in the coach with Robert Cadell [Scott’s publisher] he suddenly stood up and made a low bow to the ruins. Cadell generally enquired, “What are you doing, sir?” and he said, “I made a watercolour of this subject when I was a young man and from that day on I’ve had more commissions than I could execute.” So he himself identified it as the beginnings of his career and his success.”

In 1797 when Turner first saw Norham perched high above the Tweed’s south bank, he made a series of watercolours showing the ruin at sunrise. Visits in 1801 and 1831 resulted in further views in which he refined his approach to capturing the blazing, almost mystical light and what we might now describe as a ‘Turneresque’ merging of a historic setting with a natural landscape. By then, of course, he was the most famous artist in Britain.

“People would ask him what his secret was, and he’d say, “I don’t know any secret but damned hard work,”” adds Hall. “And that’s what you see in these sketchbooks, they’re marvellous, astonishing feats of observation, and careful application.

“He was amazingly accurate and rapid, but with controlled perspective. And that was just in architecture. In nature he had an amazing eye for phenomena like no-one else. He understood natural phenomena, thunderstorms and so on.”

The Berwick Exhibition includes an early watercolour of Warkworth Castle, which when it was exhibited at the Royal Academy was called “Thunderstorm Approaching at Sunset” and for Hill it encapsulates Turner’s uncanny ability to understand and capture weather and an atmosphere.

“If you look at it you’d think it was wrong because the wind appears to be blowing in the wrong direction,” he says. “But as Turner knew, and meteorologists concur, the ground winds in a thunderstorm are sucked into the storm so they appear to be blowing in the opposite direction. His watercolours are just full of things like that – traps for the unwary.

“He was cantankerous by nature and provocative as an artist, so he was constantly luring the less-aware into thinking him wrong. He was interested in science – he was interested in everything, he talked to everyone that he possibly could – but how much science he understood is a different matter. He understood things from being there, being in them, observing them and recording them in his sketchbooks.” 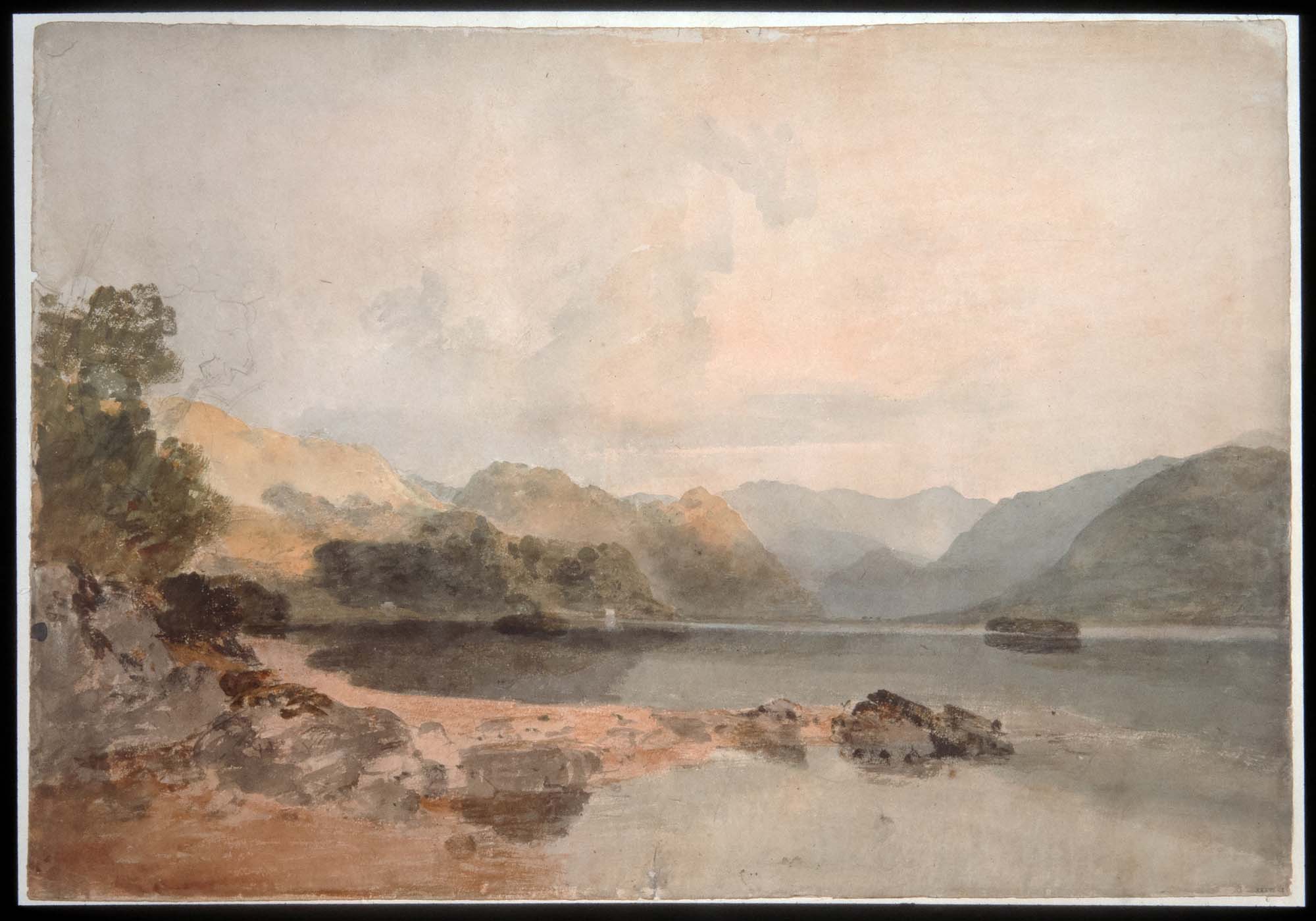 If you want to explore his journey and the way Turner worked his way back through these subjects, the three venues hosting and exploring the pivotal sketchbooks more or less follow Turner’s 1797 route. After its spell in Northumberland the exhibition moves across to the Lake District, to Carlisle, and then back to Harrogate in Yorkshire in Spring 2020. Different paintings relating to each region will complement the core sketchbooks on display.

But even if you don’t want to follow Turner’s route yourself, any one of these exhibitions will take you on a journey – from the original sketches of a young artist towards the finished watercolours of England’s most famous landscape painter.

Turner: Northern Exposure is at The Granary Gallery, Berwick-upon-Tweed from May 25 until October 13 2019. Admission is free. It then tours to Tullie House Museum and Art Gallery, Carlisle from October 19 to January 5 2020 and Mercer Art Gallery, Harrogate from January 18 to April 18 2020.

Berwick Visual Arts is an initiative of The Maltings Theatre and Cinema to develop and support the visual arts in Berwick-upon-Tweed. Our main gallery space - The Granary Gallery brings artworks from regional, national and international collections to Berwick-upon-Tweed.