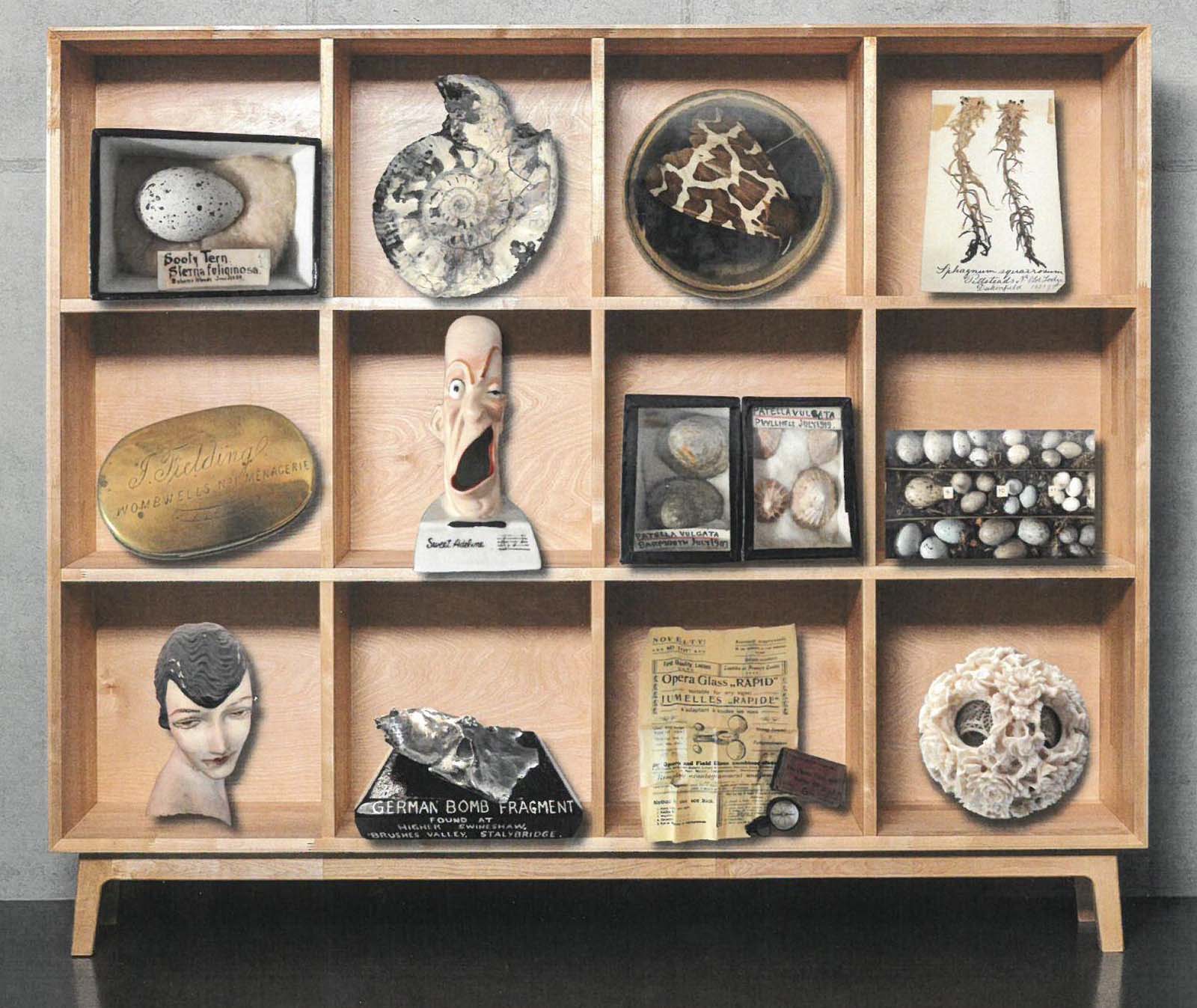 Michelle Hill, Curator at Portland Basin Museum, on some of the bizarre objects she found in the museum stores for her Cabinet of Curiosities exhibition

A forerunner to the modern museum, classic cabinets of curiosities emerged in 16th Century Europe as notable collections of various objects, serving a social and scientific function for their owners.

The term ‘cabinet’ was generally used to describe a room rather than a piece of furniture. These cabinets contained a wide range of items including: natural history, geology, art, religious relics, and archaeology.

Cabinets would also feature mythical items, such as narwhal tusks displayed as unicorn horns, dragon’s eggs and mermaid’s tails. Limited to those who could afford to create and maintain their contents, larger cabinets were used as a marker of wealth and social standing, focusing more on aesthetics and exotic items, whereas smaller cabinets tended to belong to scholars who used them for scientific purposes.

Several international museums started off as cabinets of curiosities, growing as more items were collected and donated, such as the British Museum in London, which began as an combination of Sir Hans Sloane’s cabinet as well as some other collections.

In recent years ‘Cabinets of Curiosities’ have had a resurgence in museums; I’m thinking of several examples in Northern museums including Mark Dion’s ‘The Bureau of the Centre for the Study of Surrealism and its Legacy’ at Manchester Museum, ‘The Collectors Cabinet’ at Leeds City Museum and ‘The Cabinet of Curiosities’ at Warrington Museum & Art Gallery.

Having spotted a few intriguing objects in the stores when looking through boxes I proposed a ‘Cabinets of Curiosity exhibition to be held at Portland Basin Museum. The idea was readily accepted and was seen as an ideal opportunity to get out some of the natural history collections that have no permanent display in the museum – and had not been on display for about ten years. With the Manchester Regiment museum currently closed and all its items in store it was also a chance to include some of our more unusual military material.

Being relatively new to the Service (two years) it was also an ideal opportunity to have a dig about in the stores and have a good look at the MODES database to see what may be of interest. 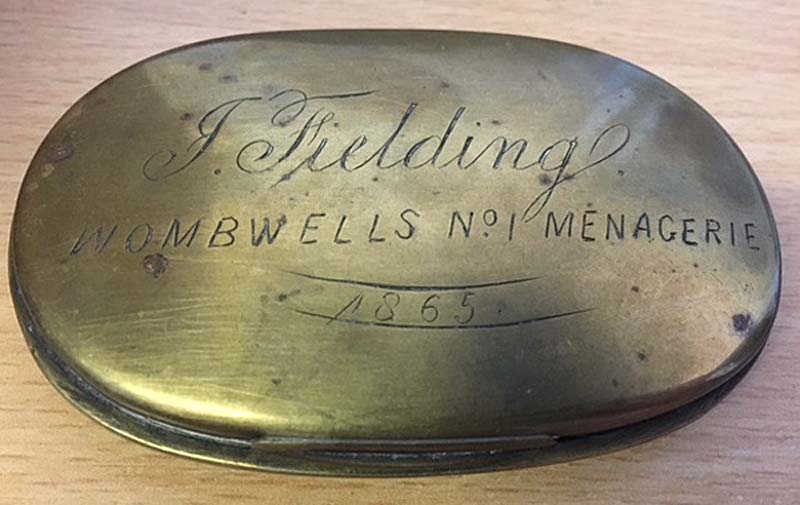 The object that initially sparked my desire to do the exhibition was this seemingly innocuous Wombwell’s Menagerie tin. I was intrigued as to what this menagerie actually was and why was this item here in Tameside?

On further investigation it transpires George Wombwell (1777-1850) was a famous menagerie exhibitor in Regency and early Victorian Britain. In 1810 he founded the Wombwell’s Travelling Menagerie and began a tour of the fairs of Britain.

The menagerie included elephants, giraffes, a gorilla, a hyena, kangaroo, a rhino and zebras. He started to breed and raise animals himself including the first lion to be bred in captivity in Britain. There is a whole website dedicated to all things Wombwell (www.georgewombwell.com) and after contacting the editor he thinks this item may have been a long service gift to ‘J Fielding’, the name engraved on the tin.

It transpires that Wombwell was a regular exhibitor at the annual Knott Mill Fair in Manchester and this local link may be why the item ended up with us. It still remains a mystery as to why we have it, but it is interesting nonetheless. 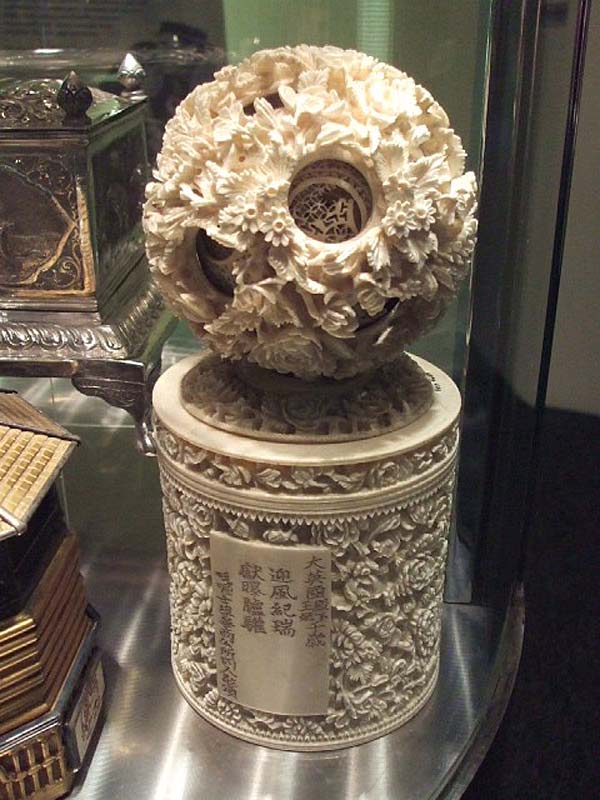 The second item to discuss is a Chinese ivory puzzle ball, which is part of a historic loan to Tameside Museums and Galleries from The Royal Collection Trust at Buckingham Palace.

Puzzle balls are made of several concentric spheres each of which rotates freely and are hand carved from the same piece of material. Making one is a lengthy and complex process involving highly skilled craftsmen using L shaped tools of different lengths to carve the various spheres.

Traditionally made of ivory they can also be found made of synthetic ivory, resin, jade, wood, and other materials. They are usually comprise between three and seven, but the world’s largest puzzle ball is made of 42 concentric balls all contained one within the other. They are called ‘puzzle balls’ from years of people apparently wondering how they were made. 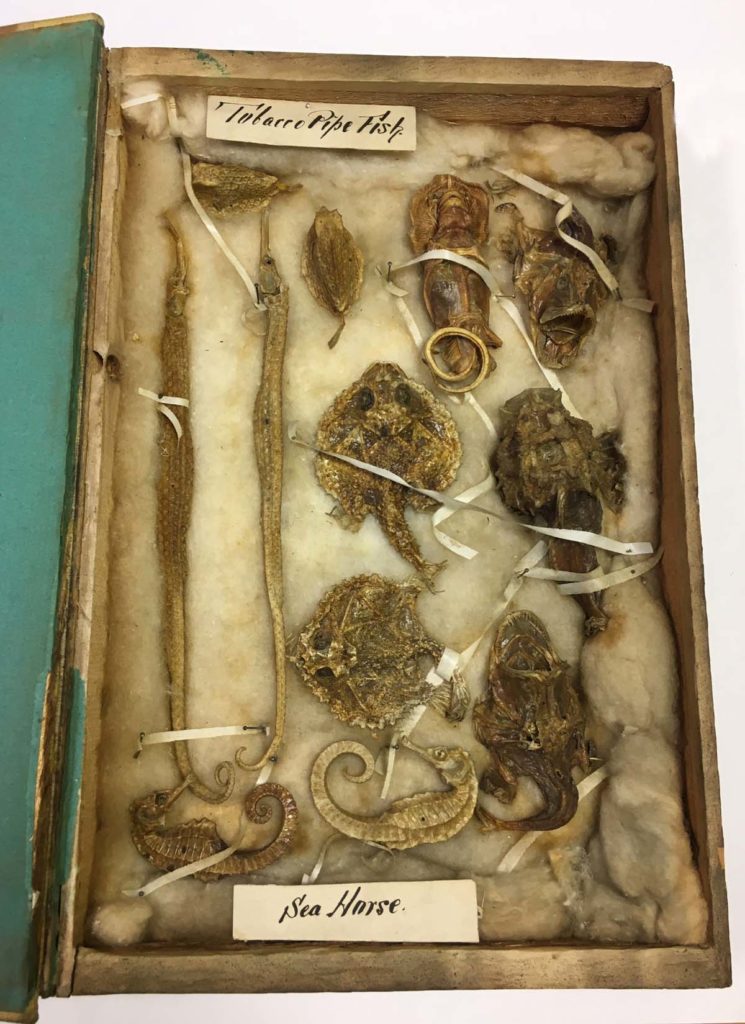 A rather bizarre find in the museum stores was this old box of sea horses and tobacco pipe fish. Long serving staff had no recollection of ever seeing it before and no information is known about its provenance. Alongside the more traditional small boxes of eggs and shells its enigmatic origins made it a definite choice for this exhibition. 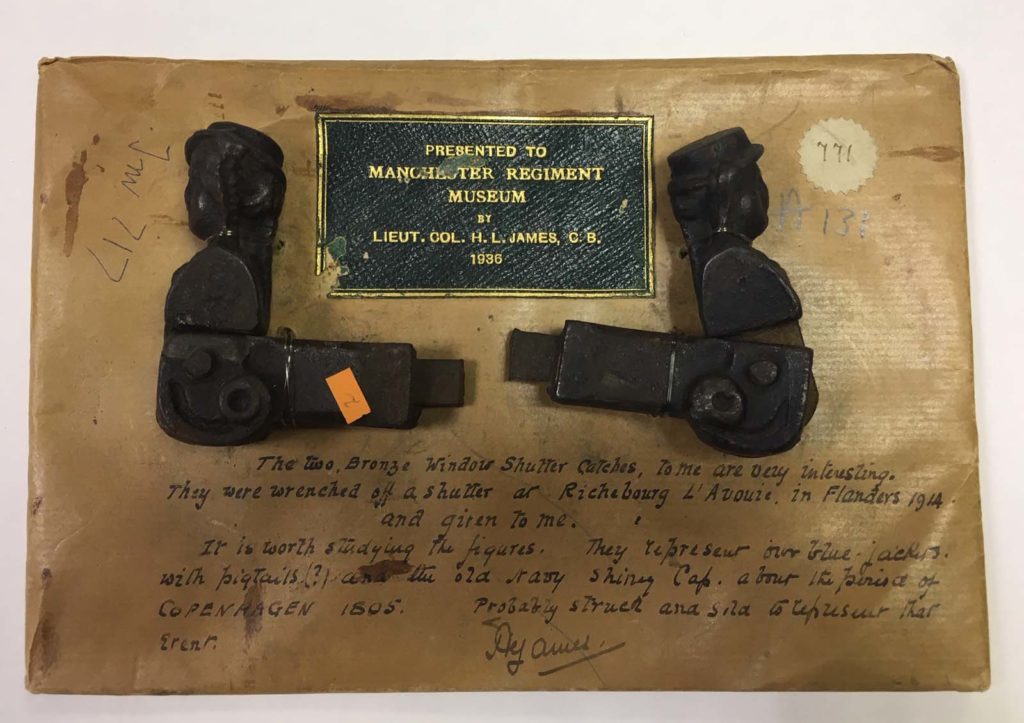 As mentioned earlier this exhibition was also a great opportunity to put out some Manchester Regiment material. These window catches presented by Lieut. Col. H.L. James of the Manchester Regiment are intriguing and I love the fact that he has mounted them on a board and detailed their history. If only we had this level of information for all of our collections…

“Two bronze window shutter catches, to me are very interesting. They were wrenched off a shutter at Richebourg L’Avouie in Flanders 1914 and given to me. It is worth studying the figures. They represent our blue jackets with pigtails(?) and the old …..shiny cap about the period of Copenhagen 1805. Probably struck and sold to represent that event” 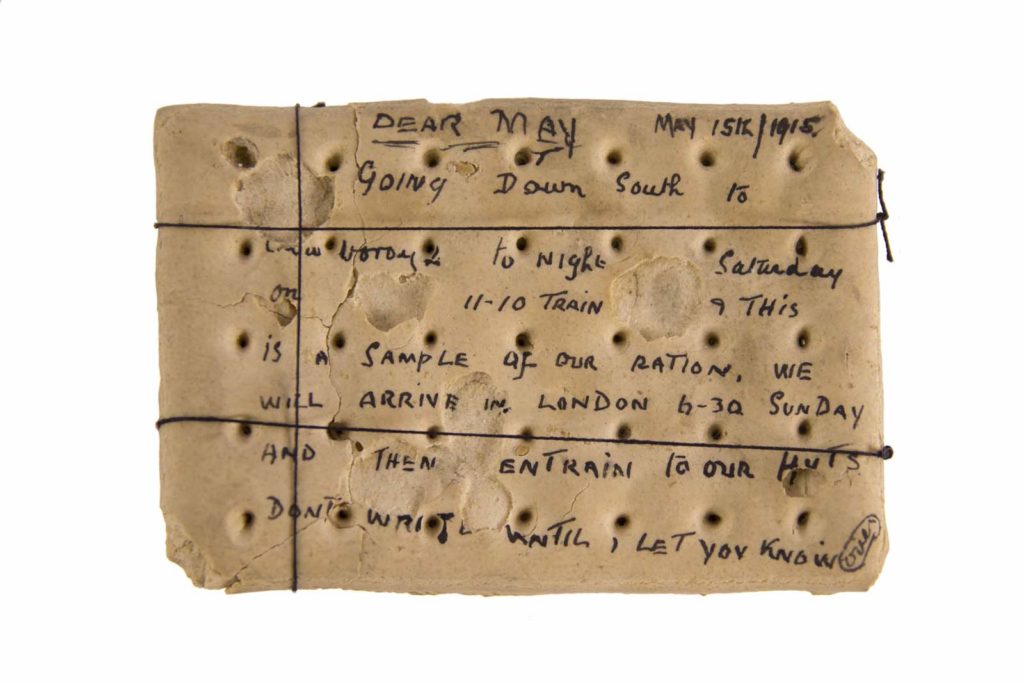 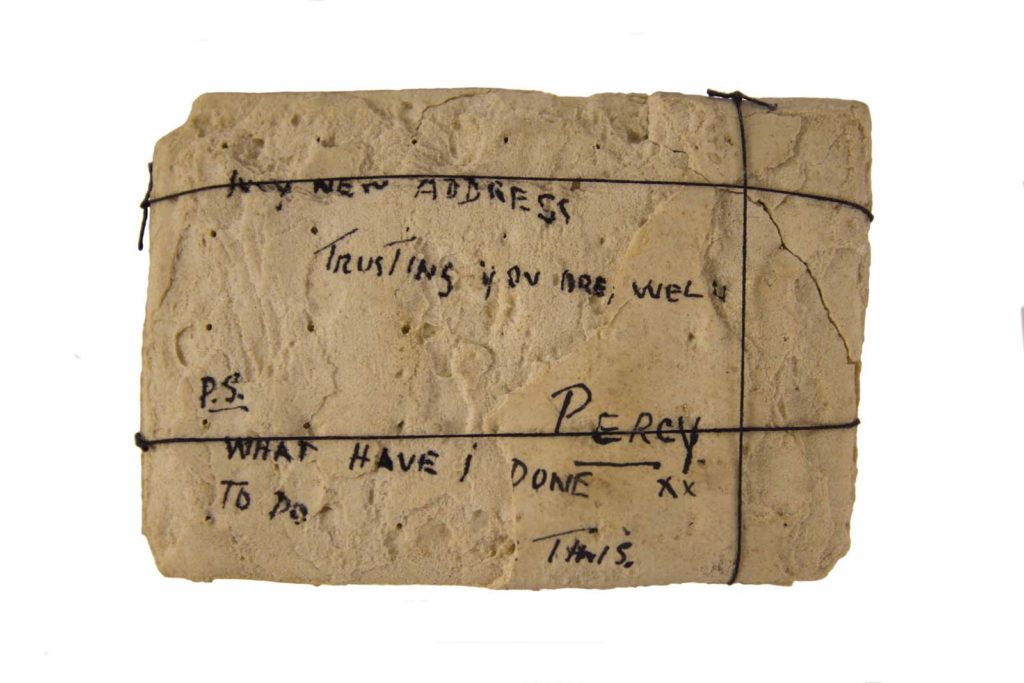 Another item on display from the Manchester Regiment collection is this hardtack biscuit with a hand-written note on it which was sent by post by Sergeant Percy Lockett of the 1/6th Manchester Regiment to his sister May. ‘Hardtack’ was a kind of biscuit or cracker made from flour and water which was an ideal replacement for perishable foodstuffs in military campaigns.

“Dear May, Going down South to… tonight Saturday on 11-10 train and this is a sample of our ration. We will arrive in London 6.30 Sunday and then entrain to our huts. Don’t write until I let you know.” Reverse reads: “My new address. Trusting you are well. Percy xx PS What have I done to d(eserve) this”

It’s amazing that this biscuit has survived in such good condition and seems a strange item to write a letter on. Research has shown that this actually wasn’t such an unusual occurrence as you may think – soldiers would send this type of biscuits home as a bit of a joke and also to show their families the kind of food they had to eat. There was also a practical reason in that paper was scarce on the front and these biscuits were more readily available. 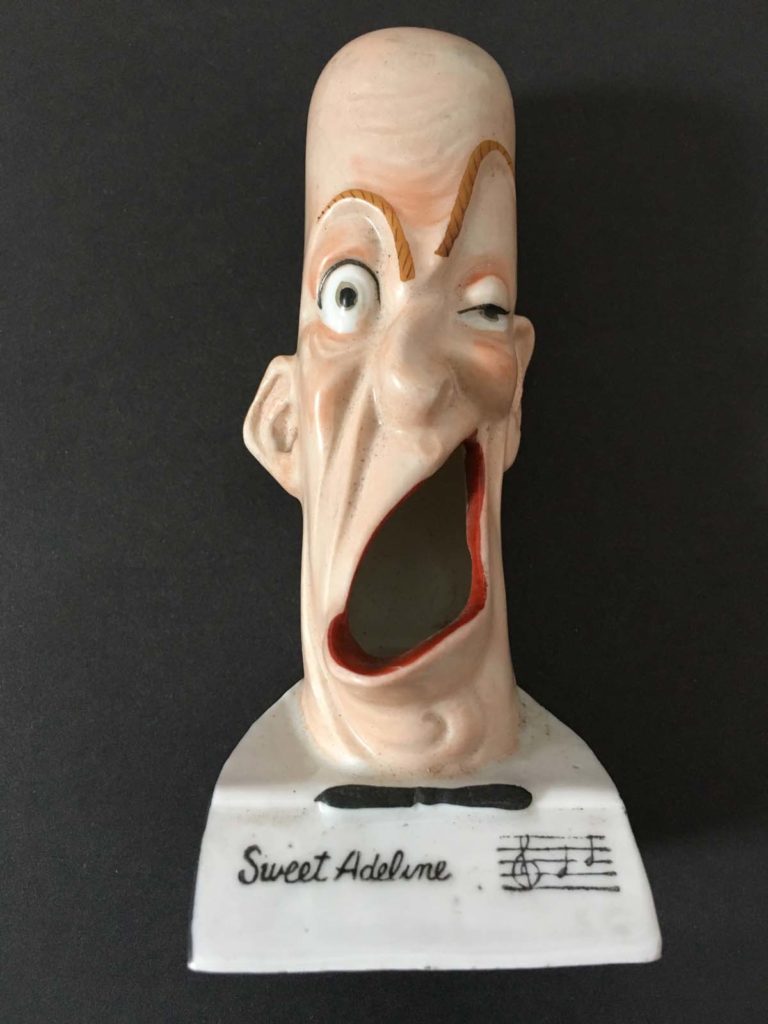 This bizarre ornament of a man with his mouth open with and the words ‘Sweet Adeline’ painted on the front was quite a mystery to us is. According to the collections database it came from a pub in Dukinfield.

The power of the internet really helped us here as apparently it was made in the 1930s by a German porcelain firm called ‘Schafer & Vater’ who were well known for their comic and figural items. It was designed as an ashtray and one of a series of four equally odd male faces pulling faces called the ‘Barber Shop Quartet’. According to one source if a lit cigarette is placed inside the open mouth then smoke issues from the ears. 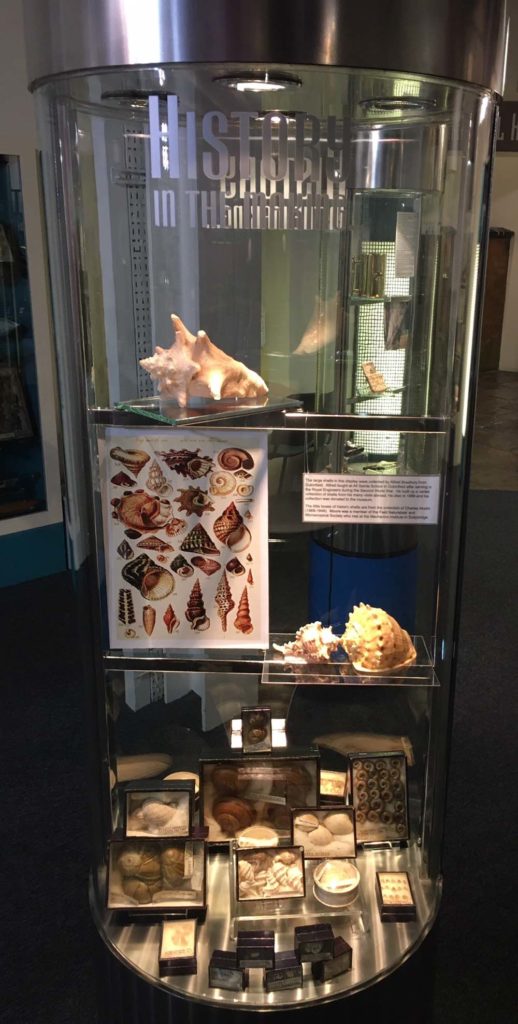 Cabinets of Curiosity is at Portland Basin Museum, Ashton-under-Lyne  until March 29 2020.

Portland Basin is an award winning museum housed in a reconstruction of the historic 1834 Ashton canal warehouse. Discover the life and work experiences of the people of Tameside. Explore a typical Tameside street of 1928 with its shops, houses, school, chapel and doctor's surgery - all brought to life…