When the world’s last Dornier bomber was recovered from the seabed, the real hard work of preserving it began

The dramatic recovery of a World War Two Dornier 17 from the sea off Ramsgate hit the headlines in 2013 as the RAF Museum won its battle against the elements to ‘save’ the last German bomber of its kind anywhere in the world.

Beset with difficulties, the rescue operation eventually brought the ravaged relic to the surface – 73 years after it had sunk beneath the waves – in a state that actually resembled an aeroplane, with a large proportion of fuselage, wings and propellers pretty much intact.

The tail section may have been in bad shape and all the glazing and weaponry was missing. But when it finally emerged from the depths, the sleek shape of the Dornier Do-17 – referred to as the “flying pencil” by its aircrew – was unmistakeable.

Beyond the drama and elation of retrieving an identifiable relic downed during the Battle of Britain, there was an even bigger challenge ahead: how to preserve a fragile aluminium aircraft buffeted by waves, colonised by sea creatures and effectively sand blasted by sea currents for 70-odd years.

After a clean on the dockside at Ramsgate, the Dornier finally arrived at RAF Museum Cosford in summer 2013 as two fuselage parts, a pair of wings, tonnes of silt and sand and thousands of barnacled artefacts. 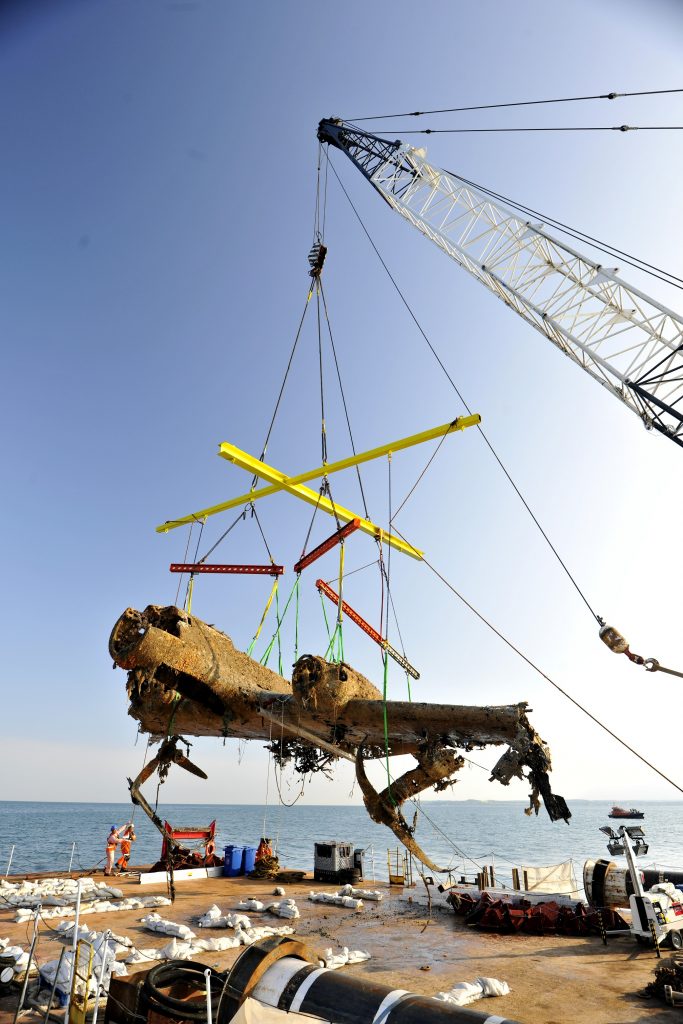 A meticulous treatment with a citric acid formulation – specially developed by University College London – has now helped to safely remove most of the barnacles, sea life, salt and other corrosive elements within a series of specially designed poly irrigation tunnels.

This process of timed hydration was expected to take a couple of years. But as Conservation Manager Darren Priday explains, the main fuselage section is already out of its protective environment and inside the Michael Beetham Conservation Centre at Cosford.

“We anticipated a couple of years in the irrigation tunnels receiving the citric acid treatment,” he says. “But fortunately the forward fuselage came out of the tunnels this summer.”

For Priday and his team of apprentices, technicians and more than 70 volunteers, the real hard work has begun. 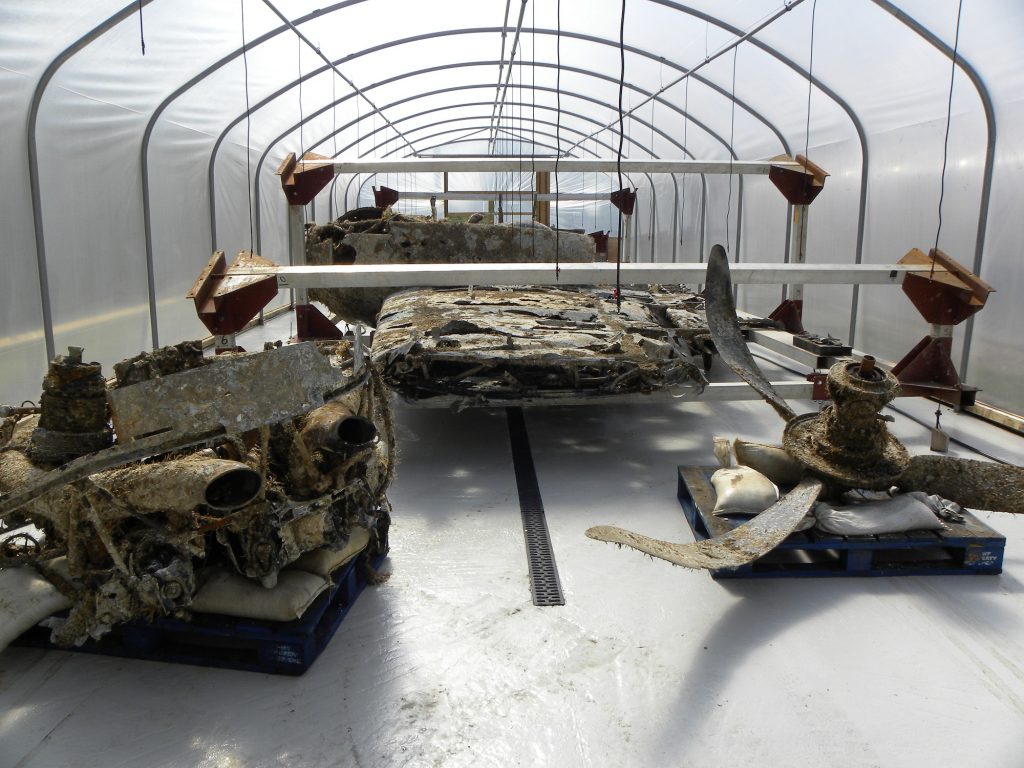 “Everybody working on the project realises it’s a very fragile object – the manufacture of the aircraft is 20 gauge which is about 0.9millimetres – so we’re using the plastic scrapers and being very careful.

“Conservators know that the plane they are working on might have a piece of glass or paper attached and they try to preserve these as much as the metal parts.”

The wings, meanwhile, are still in the poly irrigation tunnel, having had “many tonnes” of silt and sand removed from within them.

“Even though we had done that process down at Ramsgate, it’s still surprising how much is inside,” says Priday, whose team are now continuing with the citric acid treatment of the wings to neutralise the remaining salt layer.

The meticulous cleaning has, for most part, worked remarkably well. Sadly, little of the paint scheme or Luftwaffe markings remain, but there is paint on some of the propellers, which are relatively pristine. 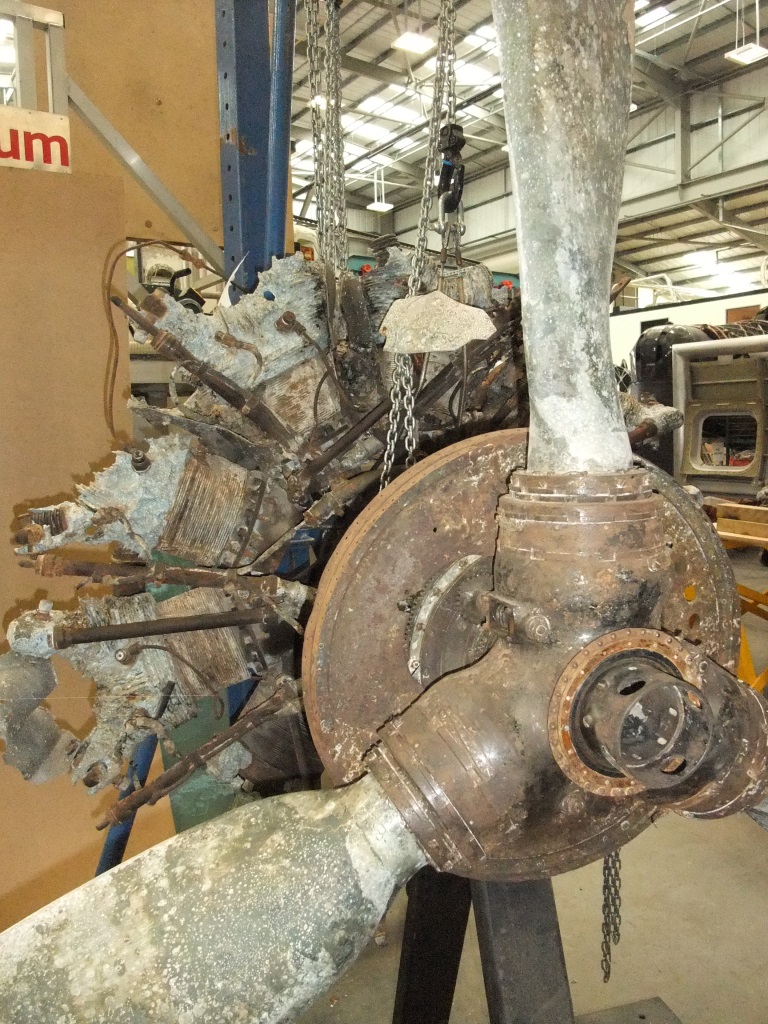 The Dornier engine and propeller. Courtesy the RAF Museum 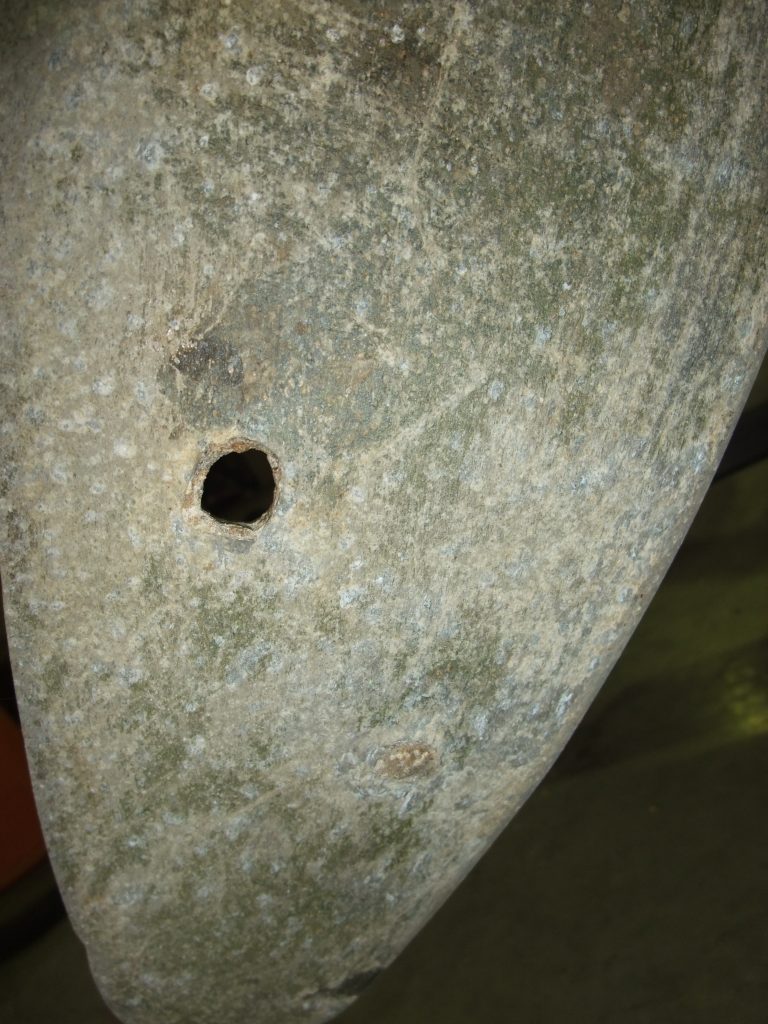 “This is one we’re really scratching our heads about,” says Priday. “When you look at the rest of the aircraft you’re thinking there shouldn’t be any propellers left but they are in quite remarkable condition.

“If you think about the suspended sand and grit in the water it is like having 73 years of sandpaper being lightly rubbed over it every time a current goes back and forth.

“If it had been in the Thames Estuary, which is not quite so violent, it might have been in better condition. But considering the environment we’re pretty pleased.”

It’s a different story with the alloys that case some of the engine components. Their close proximity to the engine’s ferrous metals has resulted in a kind of electrolysis, which has turned many of them into an aluminium ore with the consistency of rock.

Despite this setback, Priday’s team of volunteers working on the smaller parts have done some astonishing work. 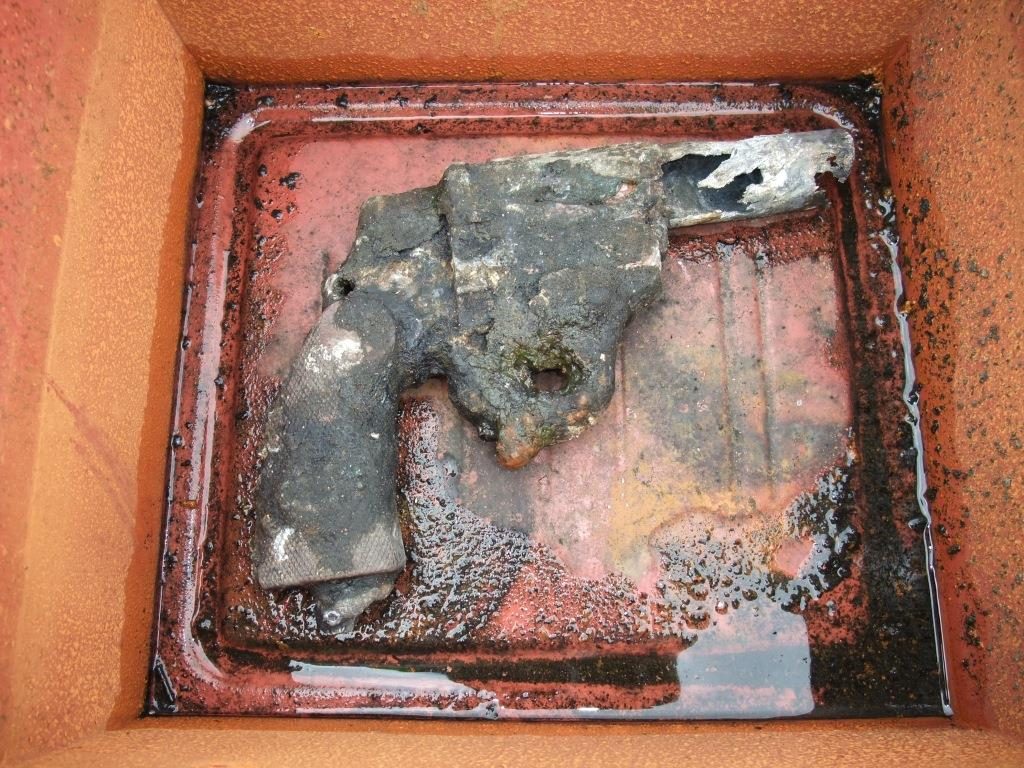 A flare pistol recovered from the Dornier. Courtesy the RAF Museum 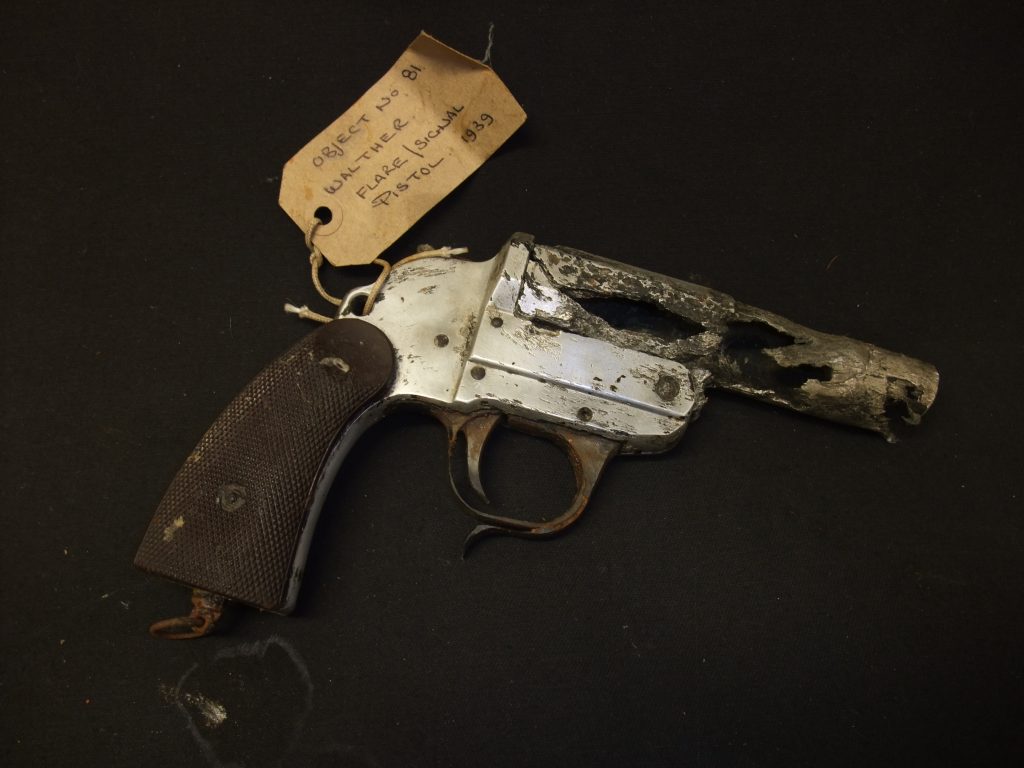 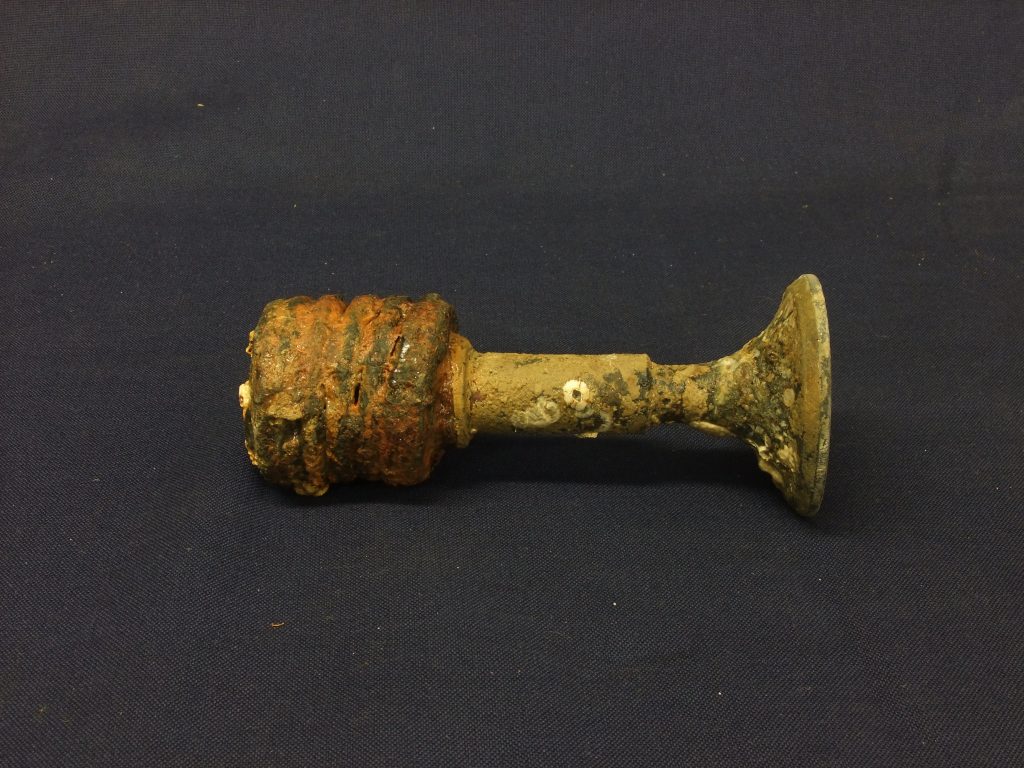 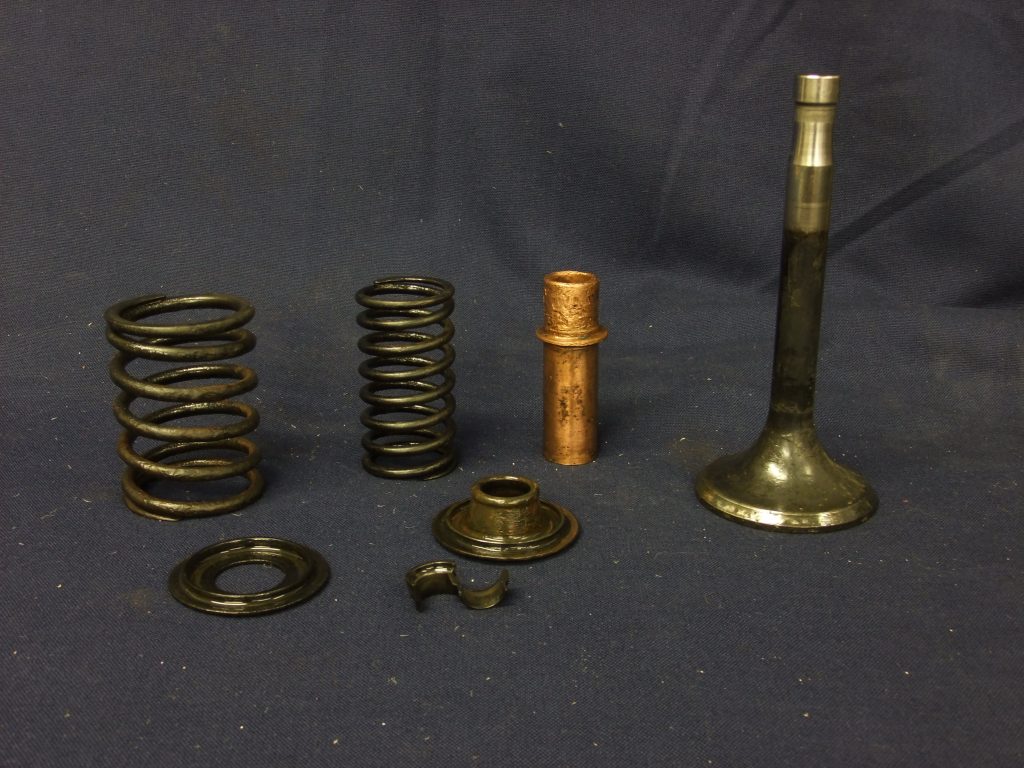 Brass and metal engine components, pieces of Luftwaffe kit including a flare pistol, personal knife, MG17 drum magazine and a first aid kit with syringes, needles, clips and bandages inside have been restored to something resembling their original condition.

These items will doubtless form part of the story when the RAF Museum decides how to display the plane. A meeting is scheduled for early November when the question of how and where (the Bomber and Battle of Britain Halls at Hendon or Cosford) will be discussed.

There are many questions to be discussed, such as whether it will be capable of being road transported. “Possibly,” says Priday. “But perhaps through the night at 30 miles an hour. I need to sit down with a few other people to see what’s going to happen.

“It’s always been down to how the conservation goes,” he adds. “When we brought it up we didn’t know whether it would survive this long.” 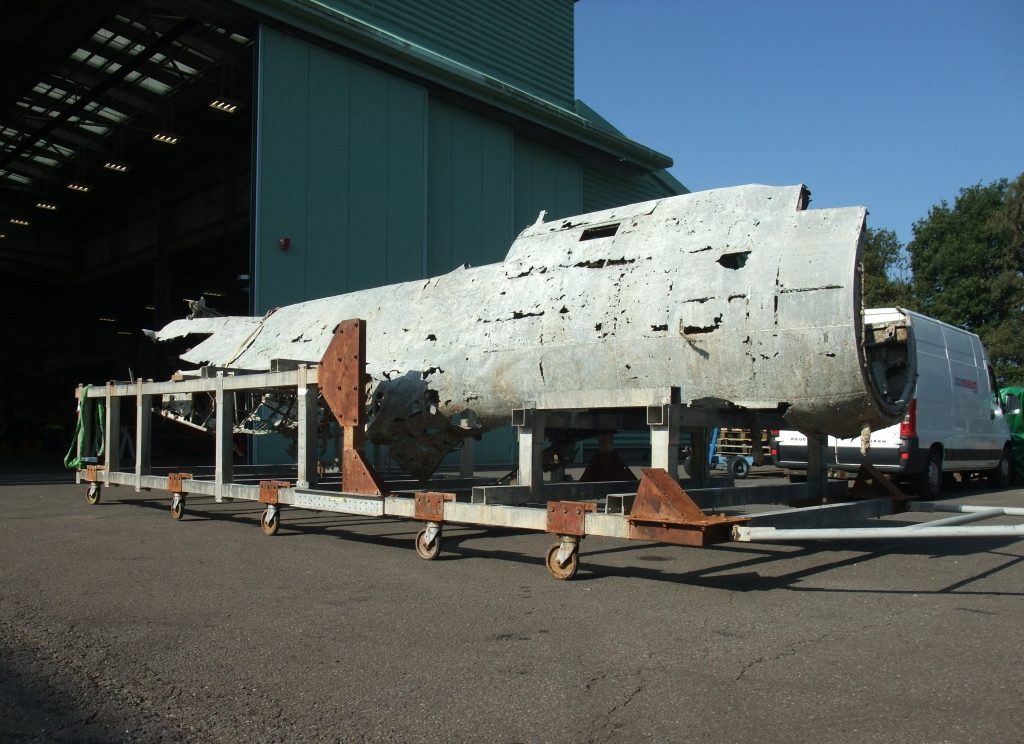 There is also the problem of how it can be put back together, whether to put the engines back in with re-manufactured casings and components to help position the surviving pieces and how to reattach the wing.

As Priday points out, the Conservation Centre has always focused on preserving aircraft rather than repairing and replacing.

“We can take measurements with our laser measuring equipment to make sure there hasn’t been separation and that the fuselage hasn’t widened slightly or the wings haven’t shrunk. At the moment I believe I can get the fuselage back onto the wing.”

With this positive prognosis it is to be hoped the plane will be re-assembled in some form so that visitors can get an idea of its original shape – and of course a vivid sense of its history.

The Do 17 was shot down by Bolton Paul Defiant fighters. At least one bullet hole has been identified in the fuselage, with a couple in the propeller.

A number of one-inch holes – with the metal peeled back rather than broken – also suggest damage by anti-aircraft fire.

“I’m not an expert in this field but I would guess that it has been hit by ground fire then the Defiant has come in behind and shot at it and finished it off,” says Priday.

Part of a large enemy formation intercepted by the RAF, the bomber was one of six enemy planes shot down on August 26 1940. Having made a crash landing which killed two of the crew, the pilot, Feldwebel Will Effmert and one of his crew were picked up alive before it sank beneath the sea.

It’s a lively picture of just one day’s action during the Battle of Britain and it certainly helps to give the work a focus and a context. 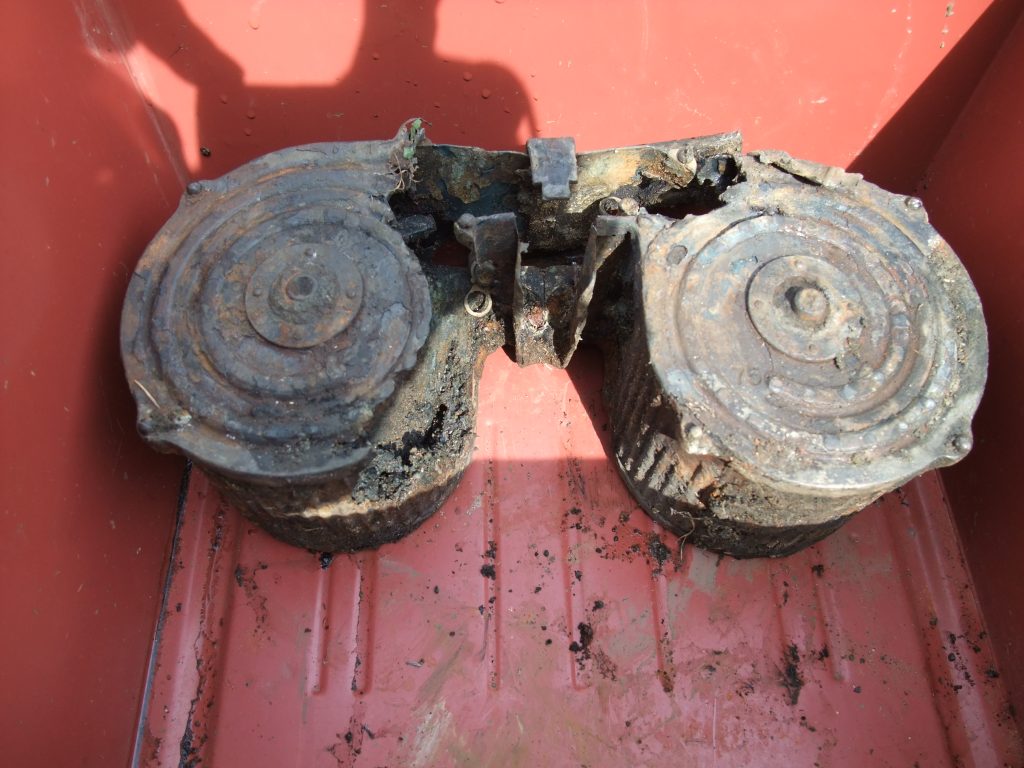 A machine gun drum magazine recovered from the wreckage

“We’ve seen the object now for 18 or 19 months so I suppose you get used to seeing something,” reflects Priday.

“But when you get visitors coming into the hanger and you see their reaction you’re reminded that what we’re actually working on is something quite special.”

The RAF Museum still has a long journey ahead to conserve and display what remains of its battered Dornier. As Priday puts it, this is a unique exhibit.

“It’s a one-off,” he says. “We’re pretty pleased we’ve got a Dornier 17 in the collection at the moment.”

May 2016 update: All three large sections of the Dornier are now inside the Conservation Centre with the great majority of marine deposit being naturally removed.

The next phase of conservation is to allow the aircraft metals to breathe again after spending 73 years in salt water. To ensure the aircraft doesn’t suffer deterioration the three large aircraft sections have been covered with tarpaulins and a dehumidifier has been placed inside to locally control the relative humidity. 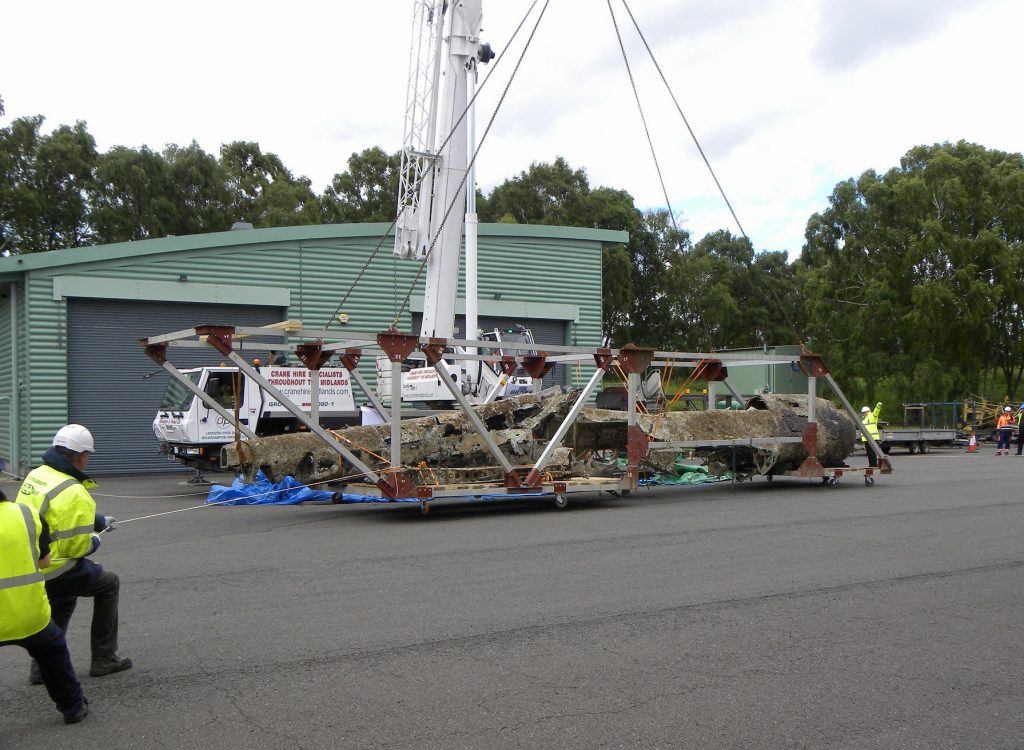 The Dornier on its arrival at RAF Museum Cosford. 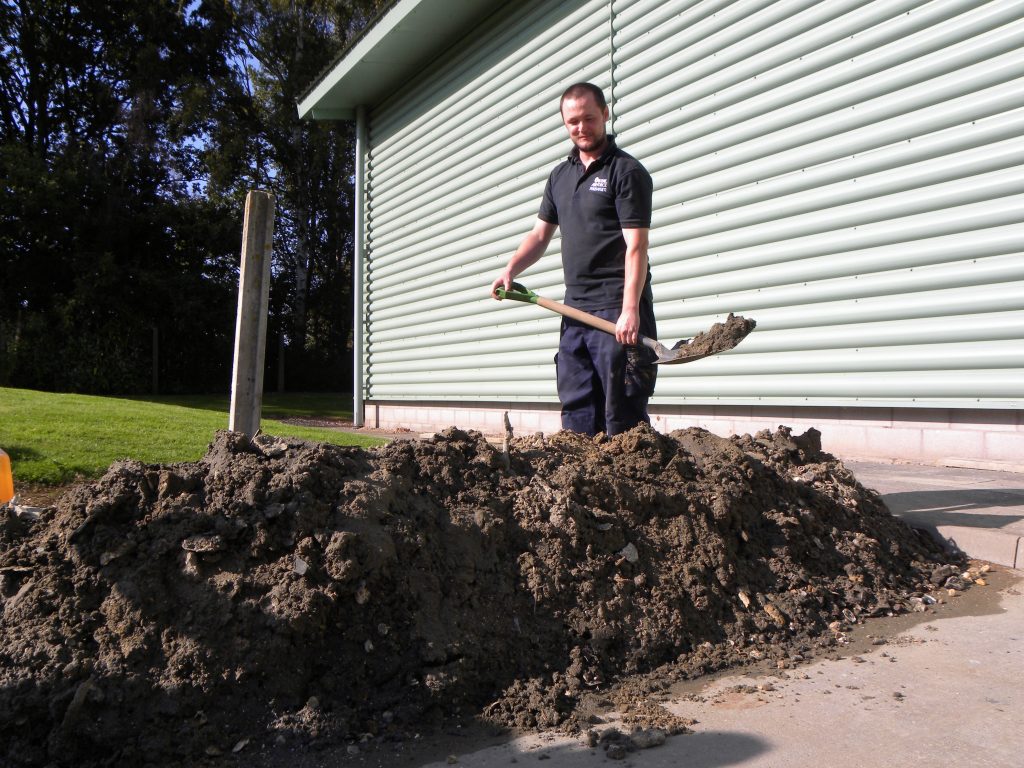 Make a donation to the Dornier Do-17 appeal.

Visitors can learn all about the Dornier Do 17, its recovery and its conservation in the Wargaming.net Dornier Interpretation Zone at RAF Museum, Cosford.

Visit the RAF Museum’s Dornier 17 microsite for detailed info on the project.