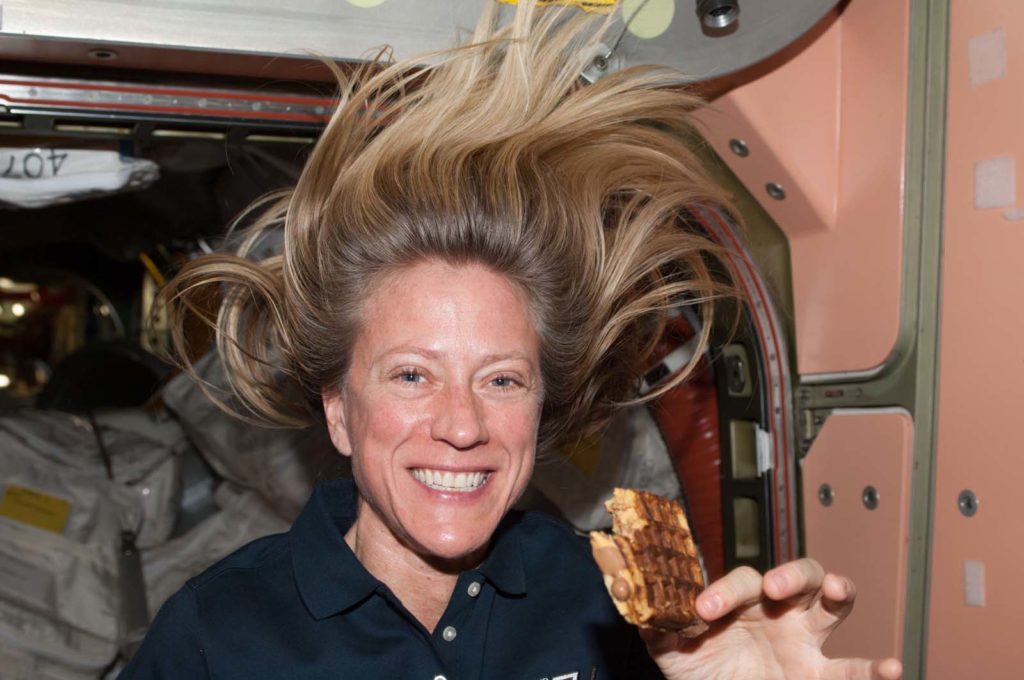 Dan Kendall, Curator at the National Space Centre, offers a bite-sized history of food in space

In space, food is a critical factor for mission success. If you’re going to send humans into space, you’d better well feed them. Obviously. But back in 1961, when Yuri Gagarin prepared to be Earth’s first space traveller, scientists didn’t know for sure if it was even possible to eat in space. Would all that floating about in micro-gravity make swallowing or digestion tricky?

Gagarin quickly determined that eating in space was OK. That is to say, it was possible, but perhaps not all that tasty. The first food ever eaten in space was a tube of beef and liver paste. Meat-paste in a toothpaste style tube. As Homer Simpson wouldn’t say, ‘Mmmmm.’

Gagarin polished off another tube (so perhaps it wasn’t as bad as it sounds), before washing it down with a tube of chocolate pudding. Much of the early space food was in this pureed baby food style, or bite-sized chunks.

Both the American and Soviet space programmes recognised that messy foods like sandwiches break apart into crumbs. Here on Earth gravity helps mess fall onto your plate, but in the weightless micro-gravity inside a spacecraft, crumbs will float away – with the potential to be really dangerous. Imagine if crumbs floated away and got into your eyes or into electrical machinery damaging the spacecraft. As a result, wraps are often used as a substitute for crumbly bread. 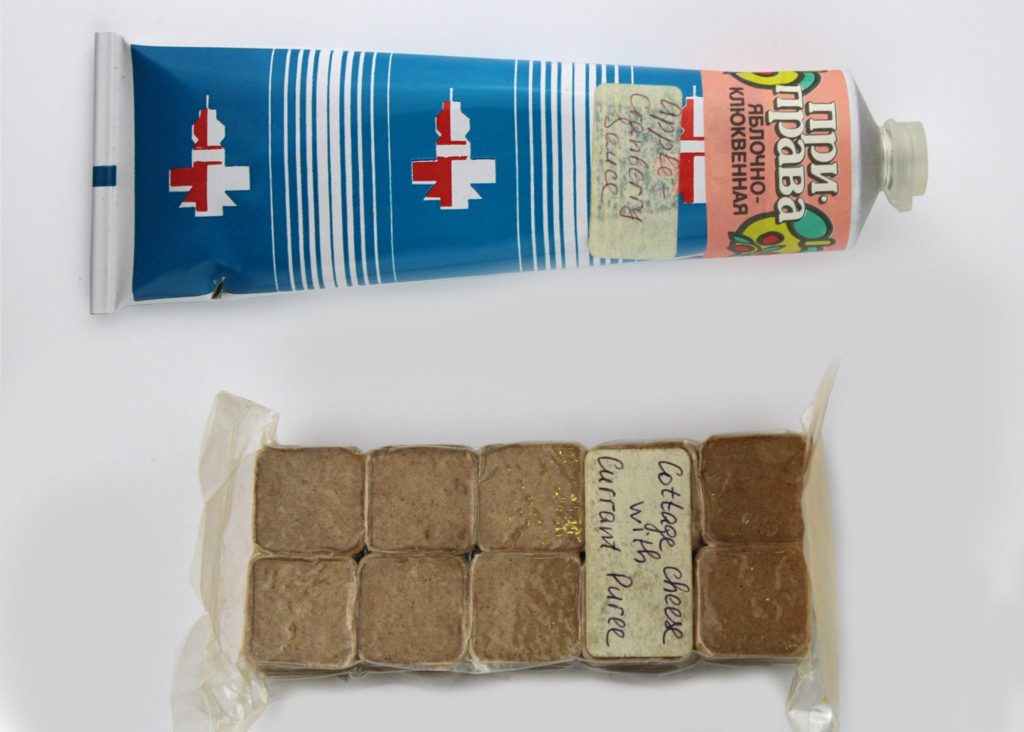 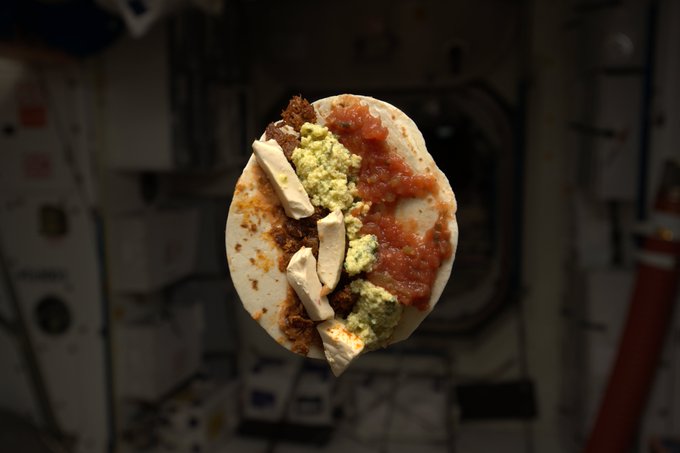 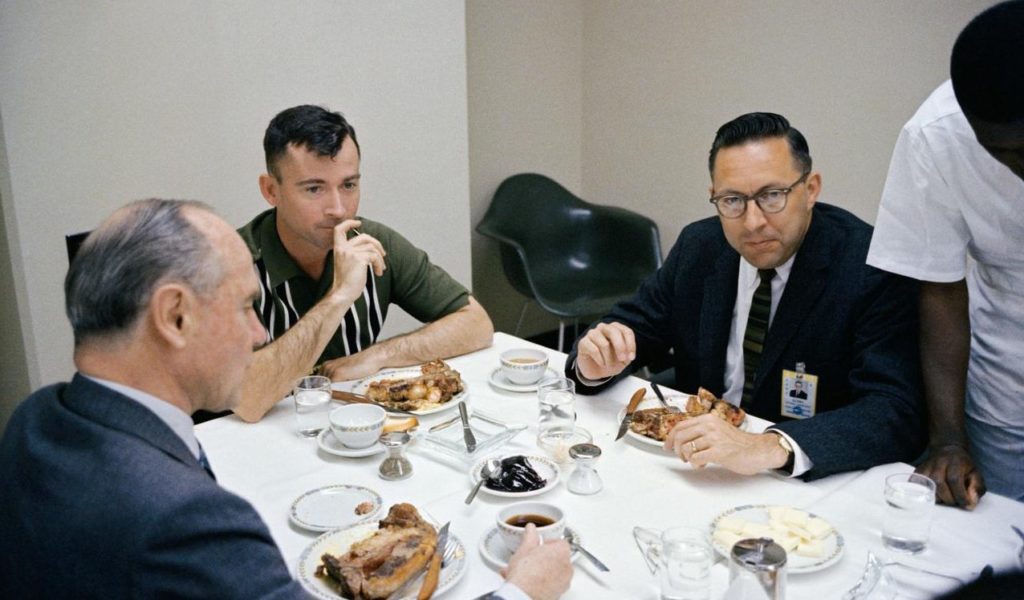 The story goes that Young stowed away a corned-beef sandwich aboard his Gemini 3 mission in 1965 – which could have caused the flight to be abandoned early due to crumbs going everywhere.

Of course, as is so often the case with such stories, that’s not entirely true.

Deke Slayton, head of the astronaut office at the time, claims he was well aware that Young had snuck the sandwich aboard, and only took a quick bite before safely stowing it away again.

Following the mission some members of Congress were upset by the incident, even asking for an investigation. They claimed that as one of the mission goals was to test space food that had been developed for the Gemini programme, this corned-beef sandwich was an expensive waste of time and money.

However, despite interest at the time, Young’s corned-beef sandwich ‘scandal’ (if it can even be called that) has always felt blown out of proportion. Nobody was actually in any danger. Although he did have to go without mustard or pickle. Poor guy. 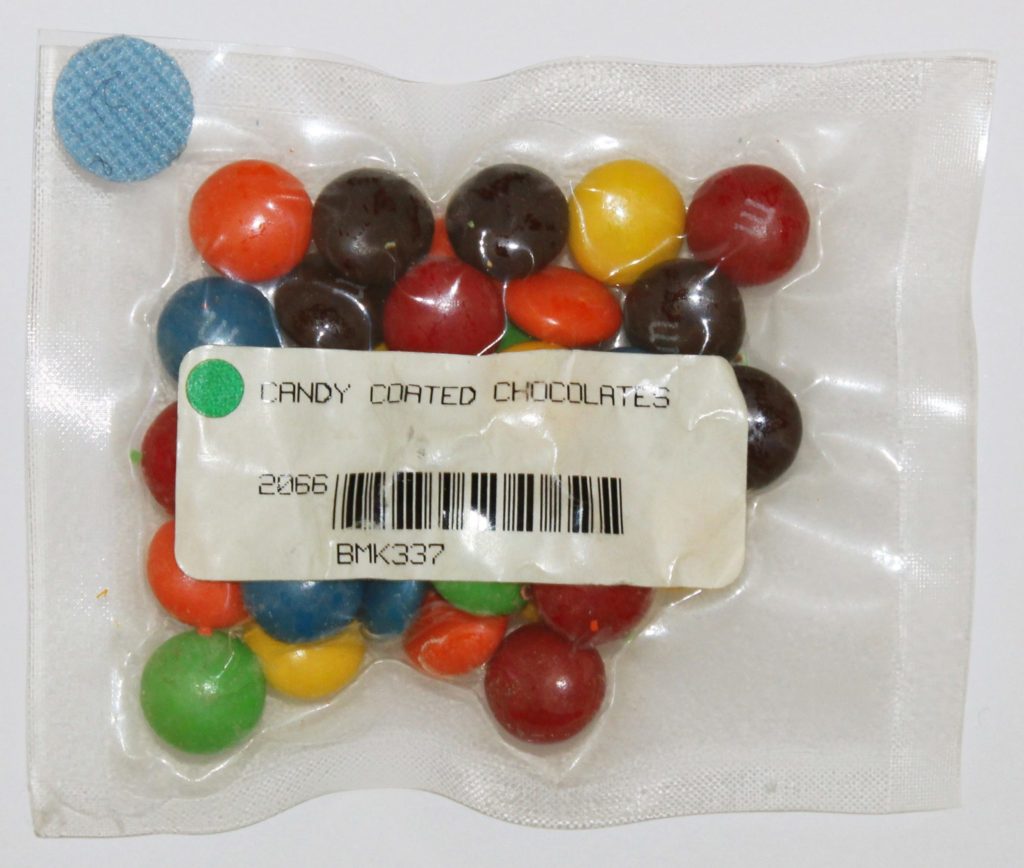 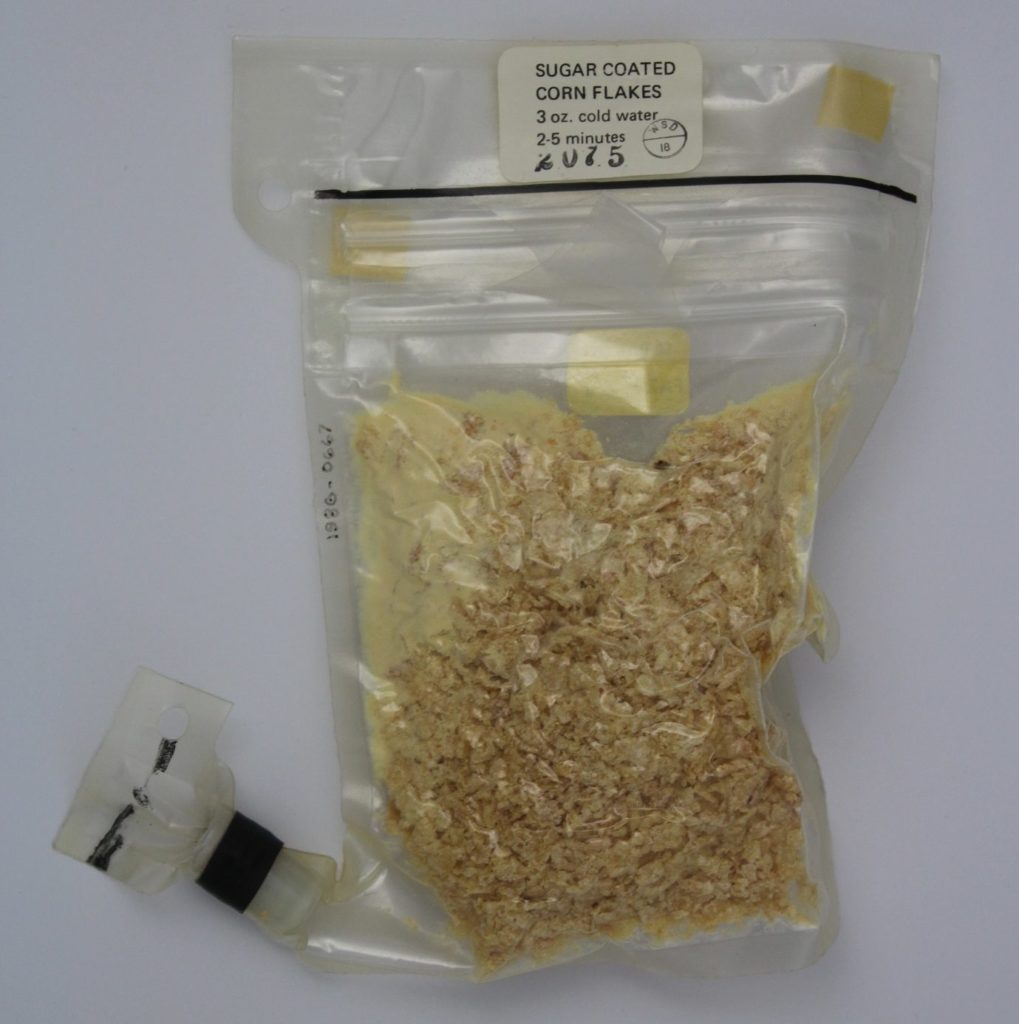 Bread is used in space, but often it is in bite-sized chunks covered in an edible gelatin layer to avoid those pesky crumbs. Alongside safety, the other priority for space food has been to provide nutritious meals. Spaceflight takes its toll on the body, so keeping healthy is critical. The food also needs to last, as it might be a long time between resupply missions.

Natural form foods – Nuts, granola bars, etc. Food that is ready to eat and lasts for a long time.

Rehydratable foods – Freeze-dried food that can be rehydrated once in space. The method used to freeze-dry food retains the nutrients, making it last longer. It also makes the food lighter and easier to store. Weight saving is important as it costs thousands of pounds to send even a few kilograms of food to the International Space Station.

Thermostabilised foods – A device looking a bit like a sandwich toaster heats food for a long time and gets rid of nasty microorganisms and enzymes that cause food to go off. This is then either put into tins or sealed pouches.

Space food often gets a bad press as being a bit unpleasant. This is down to a few factors. Firstly, the sort of food you see on display at places like the National Space Centre (see pics), is the stuff that doesn’t get eaten. The nicest food does, so never makes it back to Earth.

Secondly, whilst in space fluids move about the body differently. Mucus builds up in the sinuses but, without the normal gravitational help, it doesn’t drain away properly. This leaves astronauts feeling like they have a heavy cold – struggling to taste their food. As a result, most astronauts say that they prefer spicier food when in space.

The final reason space food gets a bad press is that taste hasn’t been the most important factor. Over the years the food has got better (better than Gagarin’s beef and liver paste at least), but nutrition and safety have remained the priority. 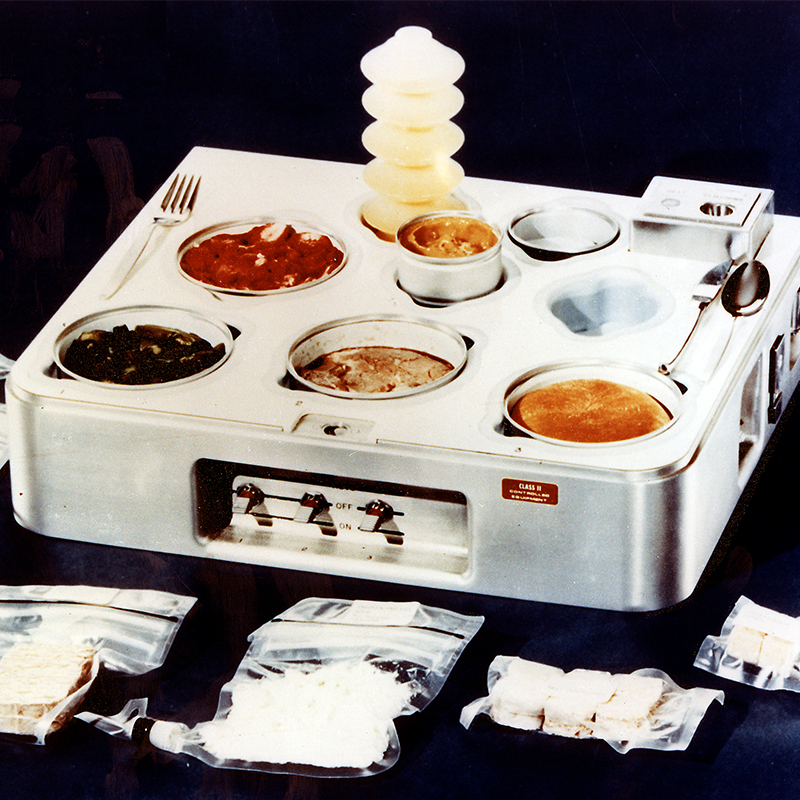 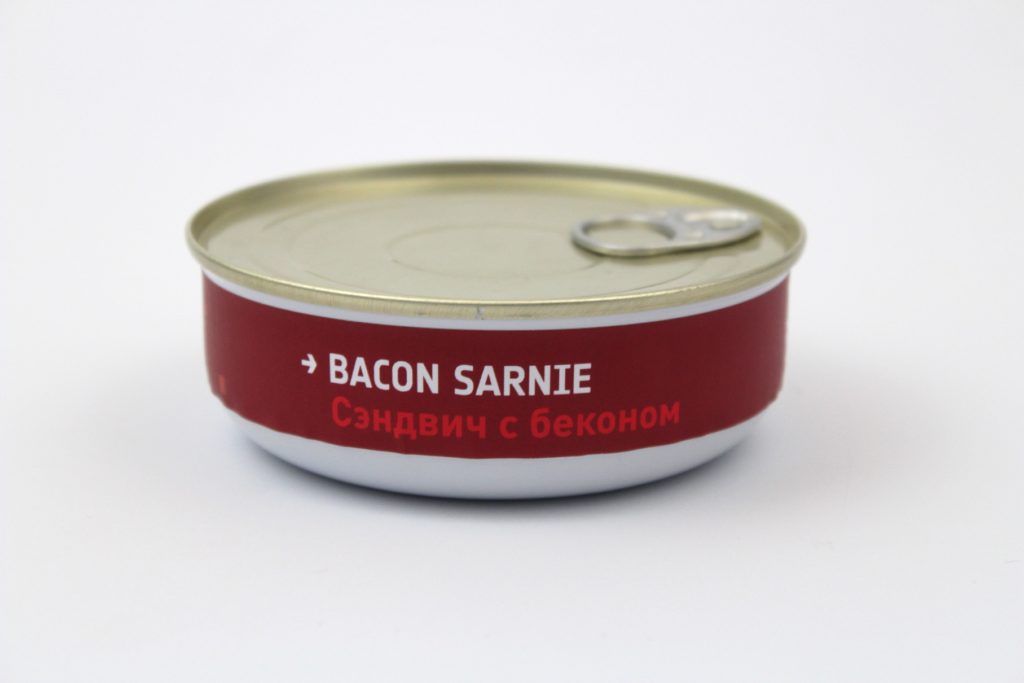 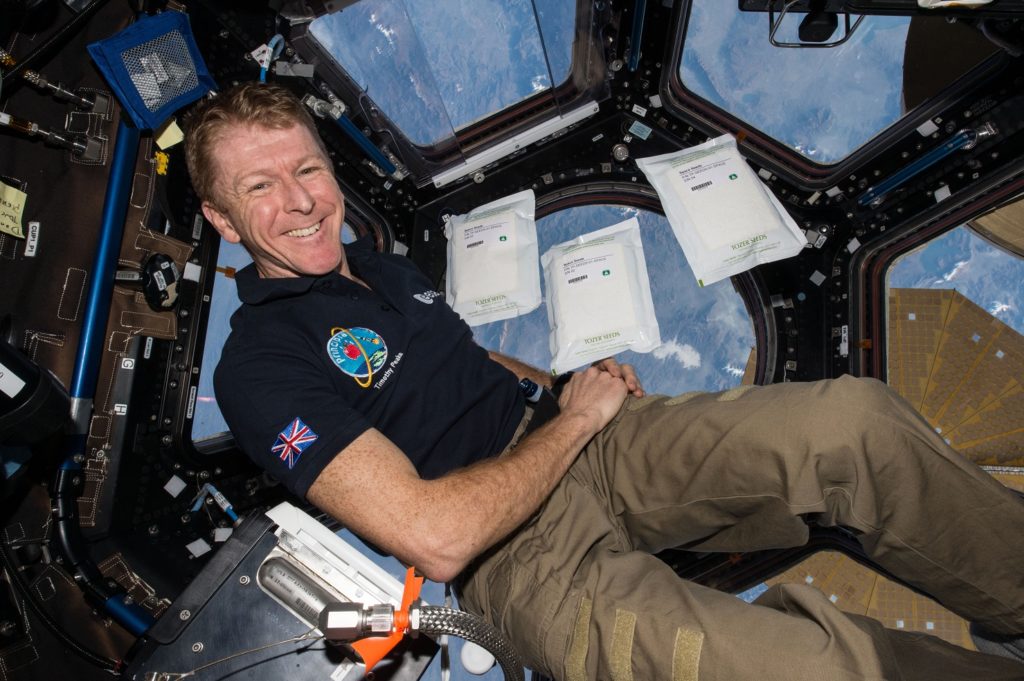 Arguably the best food in space was served aboard the American space station Skylab. Skylab had special food stations, which acted as both a table and a cooker. Food and drink cartons could be slotted into the device, keeping them from floating away and allowing the astronauts to use cutlery to eat. Moist food stuck to the spoon, thanks to surface tension – helping to make eating feel like a more normal experience.

The Skylab food station also had three heating elements at the front. This meant that food placed into one of the three slots could be heated up, with the crew grateful for hot meals.

Another improvement NASA made was developing a way of allowing astronauts to use salt and pepper on their food. You can’t sprinkle it on without it going everywhere, so the salt comes in a water solution to add a couple of drops to mix into the dish. Pepper is similar, but in an oil-based solution – simple but effective.

Fast-forward to the start of the twentieth century and the International Space Station has seen even more culinary developments. Crews aboard get re-supplied with fresh food at regular intervals. They still need food to last a long time, but they also get more treats now. Pre-flight the food is tasted by the astronauts and judged according to a nine-point system; only accepted with a score of six or above. The menu on the International Space Station includes more than 100 items.

When British astronaut Tim Peake travelled to the International Space Station in 2015, he worked with celebrity chef Heston Blumenthal to come up with something new. Blumenthal recognised the fact that food has a greater power than simply sustaining astronauts. If we plan to send humans on long-duration flights to places like Mars, we also need to consider their well-being.

As a result, Blumenthal developed a menu for Tim that included meals that would remind him of happy memories from home. Food can help to keep astronauts connected to Earth and their families, providing morale boosts when needed.

For Tim a lime curd reminded him of his guilty pleasure key lime pie. A truffled beef stew brought back memories of a romantic meal with his wife, whilst a chicken curry is simply one of his favourite meals. Before all these though, his first meal in space was a specially developed bacon sandwich. To get around the breadcrumb issue, Blumenthal packaged it in a tin and used crustless, very dense bread. By all accounts, it was pretty good.

As we plan for our future as a space-faring species, being able to grow your own food in space has become more important. Humans travelling into deep space won’t be able to take all the food they need with them. Being able to grow your own becomes not just helpful, but essential. A lot of research has been done into this, as growing fruit and vegetables in space is tough. With no ‘up’ or ‘down’, as well as difficulties with lighting, nutrient supply to roots, and microbes in the soil, space gardening takes some serious green fingers. 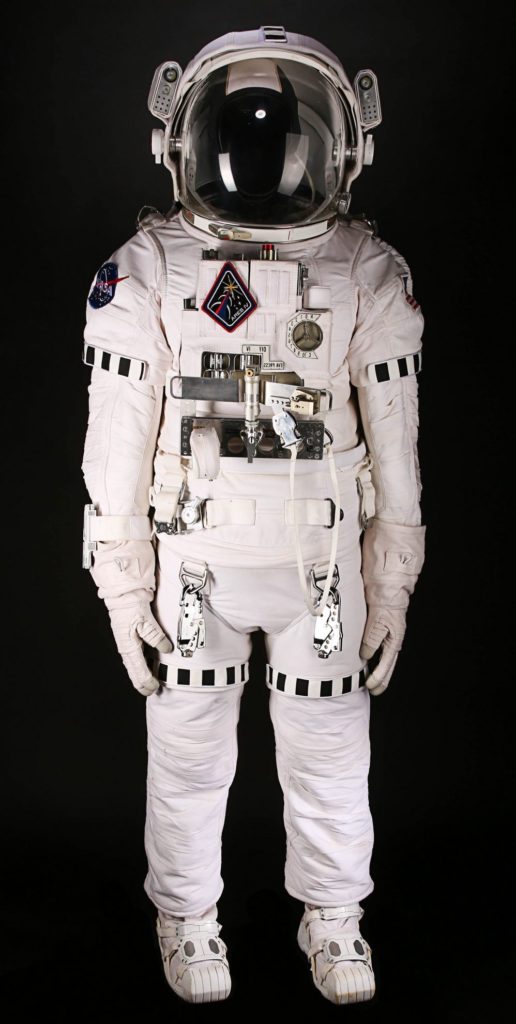 The International Space Station has special mini-greenhouse units that can control water and light levels automatically. The European Space Agency also has a system with a centrifuge that allows them to simulate gravity. We’re getting better all the time and moving towards sustainability in space.

Learning about growing food on other planets is of interest too, especially if we plan to live on Mars. In the film The Martian, Matt Damon’s character famously grows potatoes in Martian soil – with a little help from his (and his crewmates’) own self -made fertiliser. Let’s face it, we’re talking astro-poo here. In the film it worked, but could it work in the real world?

As is often the case, developments in space have other benefits. New quality control systems to prevent bacteria causing food poisoning in space have helped improve general preservation, nutrition, and food preparation. Low maintenance ovens aboard the International Space Station, which work on low electrical currents and heat food directly through hot jets at the top and bottom, have informed improvements to commercial and residential ovens back on Earth.

So, next time you’re feeling peckish or booking a meal at a fancy restaurant, spare a thought for the astronauts eating some of the most expensive food there is – even if it’s not always the tastiest.

This article was first published on the National Space Centre blog. Explore more stories at spacecentre.co.uk/news/blog/

The National Space Centre is a Science and Discovery Centre dedicated to the awe-inspiring story of Space exploration. Discover six interactive galleries, the UK's largest planetarium and the iconic, 42 metre-high Rocket Tower.