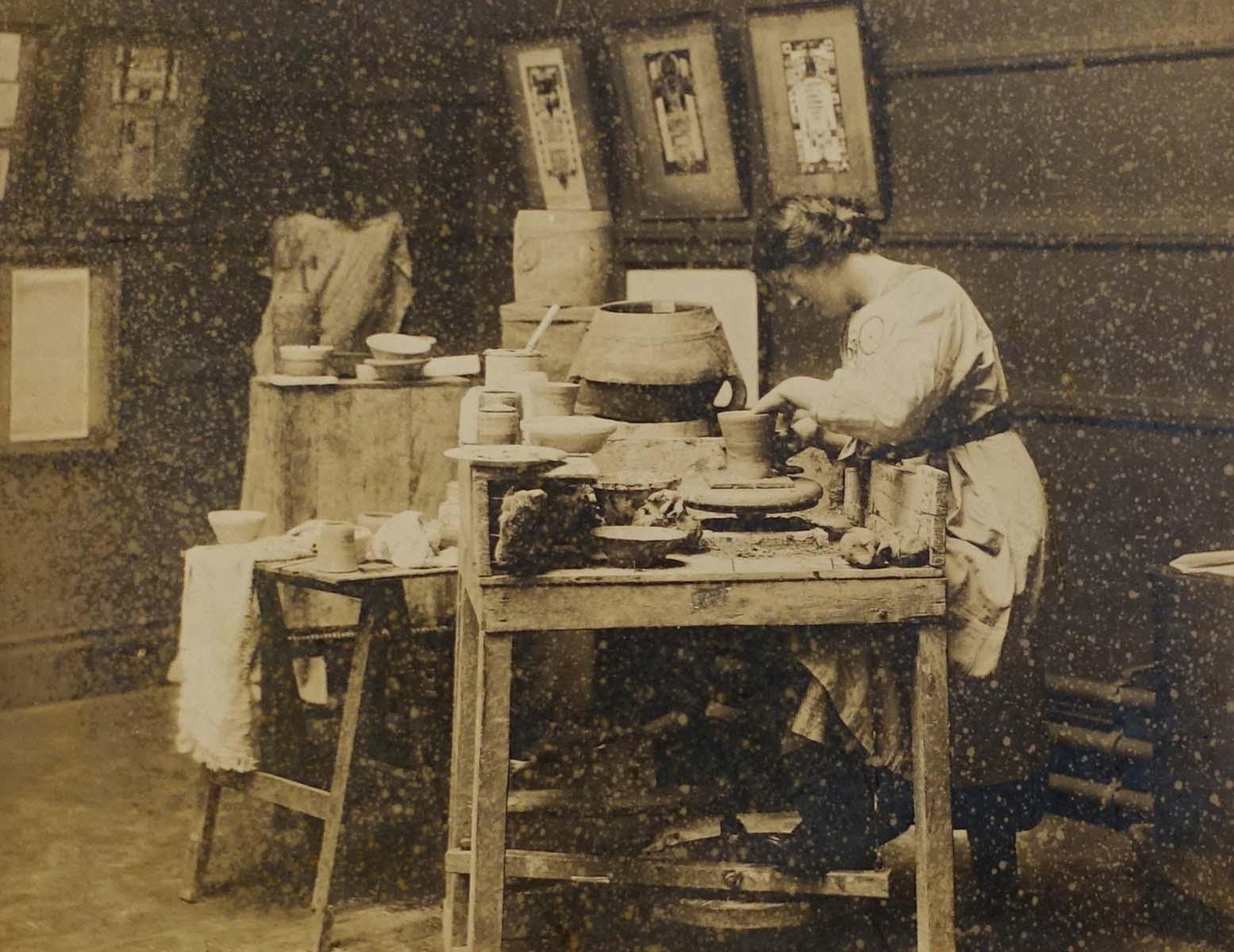 Denise Wren giving a pottery demonstration in Kingston Museum Art Gallery during a Knox Guild exhibition held there around a century ago. Courtesy Kingston Museum

Kingston Museum Curator Charlotte Samuels on the work of pioneering studio potter and designer Denise Wren, whose fascinating archive of ceramics and paper documents is held at the museum

Denise Wren (1891 – 1979) was a pioneering potter and one of the first few women studio potters in the UK, but apart from some tuition at Camberwell College of Art in around 1922, she was largely self-taught.

Born Denise Tuckfield, she attended Kingston School of Art from 1907-1912 where she was a student of Art Nouveau designer Archibald Knox. As there were then no classes for aspiring potters, she learned how to throw on the wheel at nearby Norbiton Potteries, where staff obligingly fired her ceramics alongside their commercially produced flowerpots.

Today her work is held in collections such as the V&A, the Crafts Study Centre in Farnham, York Art Gallery and Aberystwyth University. One of her jars was recently displayed in the ‘Things of Beauty Growing’ exhibition at the Fitzwilliam Museum in Cambridge.

At Kingston Museum we hold a large archive of her work, generously donated by her family, owing to her local connections. It includes her ceramics, designs, photographs, notebooks and letters. 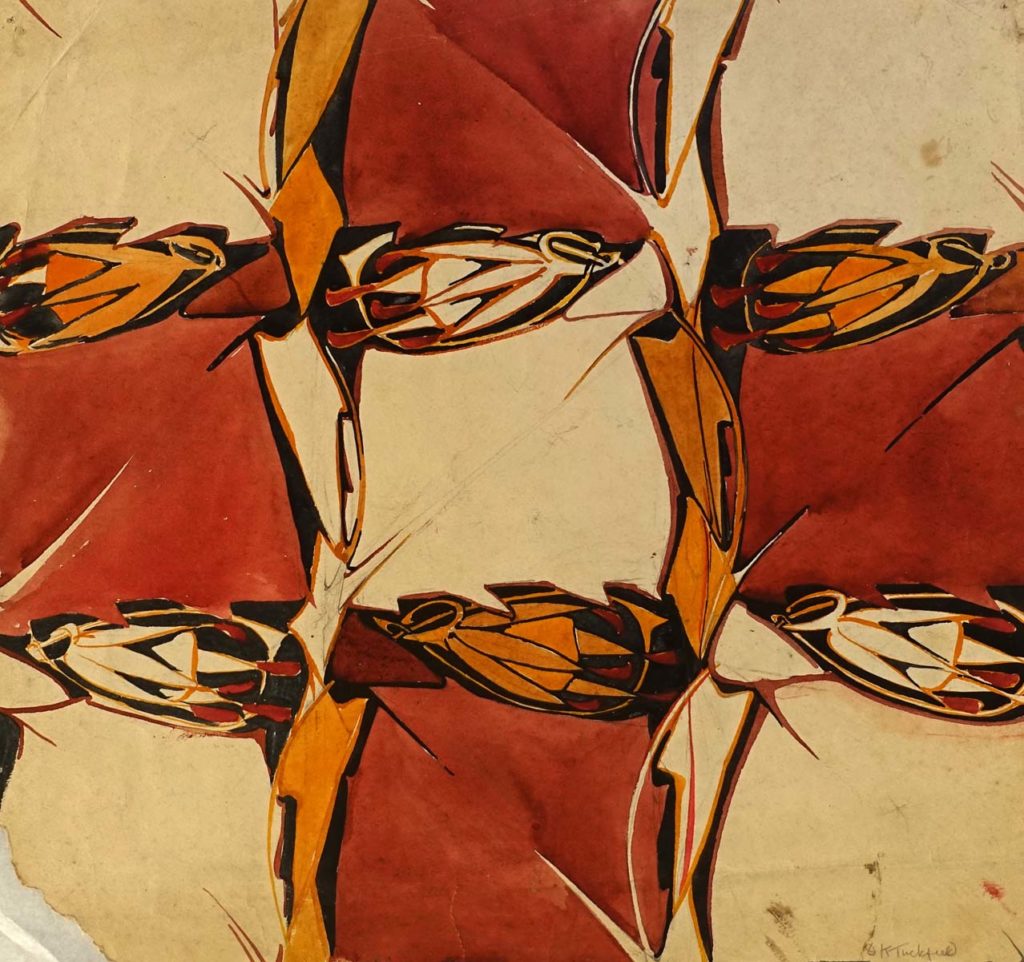 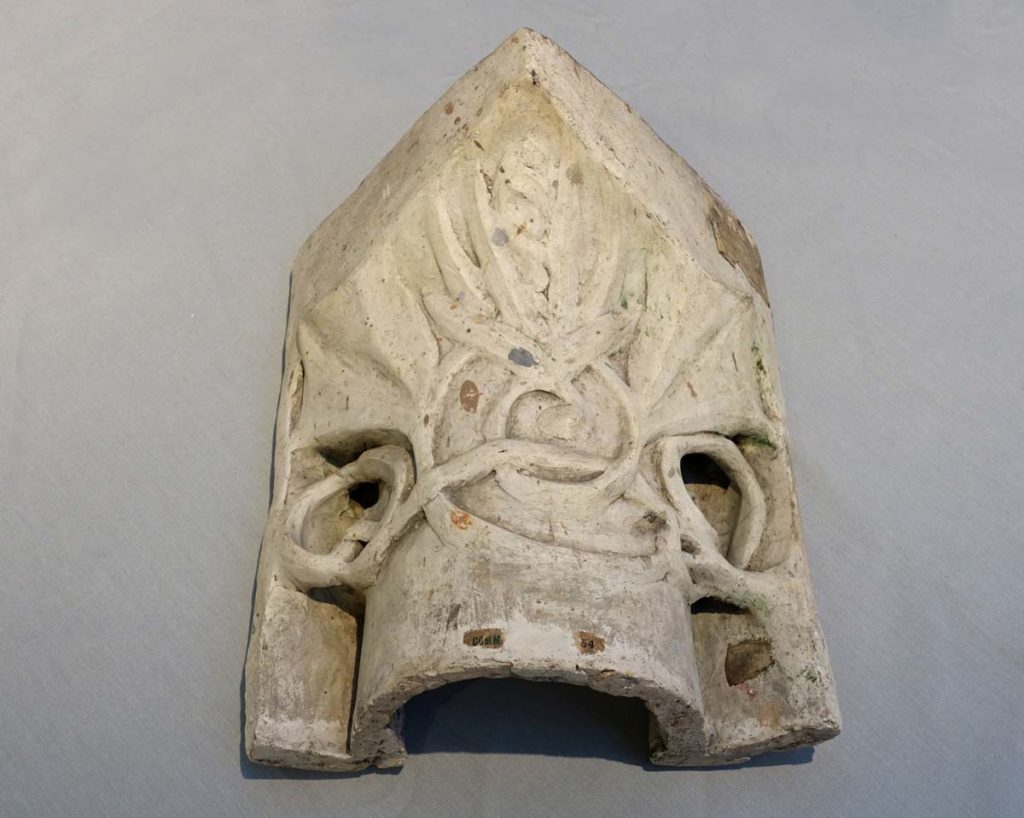 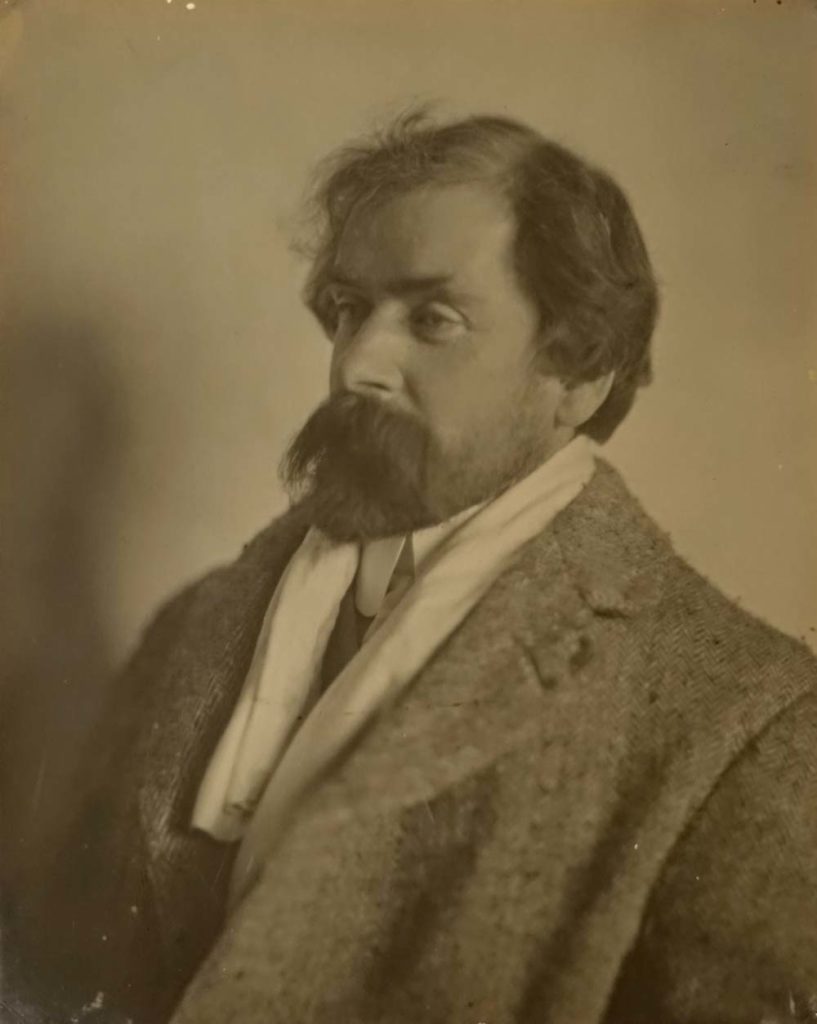 Her teacher, Archibald Knox, encouraged his Kingston students to observe and draw the everyday things that surrounded them and to foster a critical eye for what constituted good design. The intention was for students to develop a sense of design which would enable them to work in any medium.

However, Knox’s unorthodox approach was condemned by the South Kensington Examination Board and he abruptly quit his teaching post in 1912.

Devastated at the loss of their mentor, Wren and her fellow students founded the Knox Guild of Design and Craft (1912-1935) which championed Knox’s philosophy of art. The Guild sold their work from a showroom in Kingston Market Place and held annual displays in Kingston Museum Art Gallery, plus three exhibitions at the Whitechapel Gallery in East London during the 1920s.

In 1920 Wren and her husband Henry purchased some land at Oxshott, Surrey, upon which they built their own home to Denise’s design. It was planned as a live/work space where they could produce pottery. 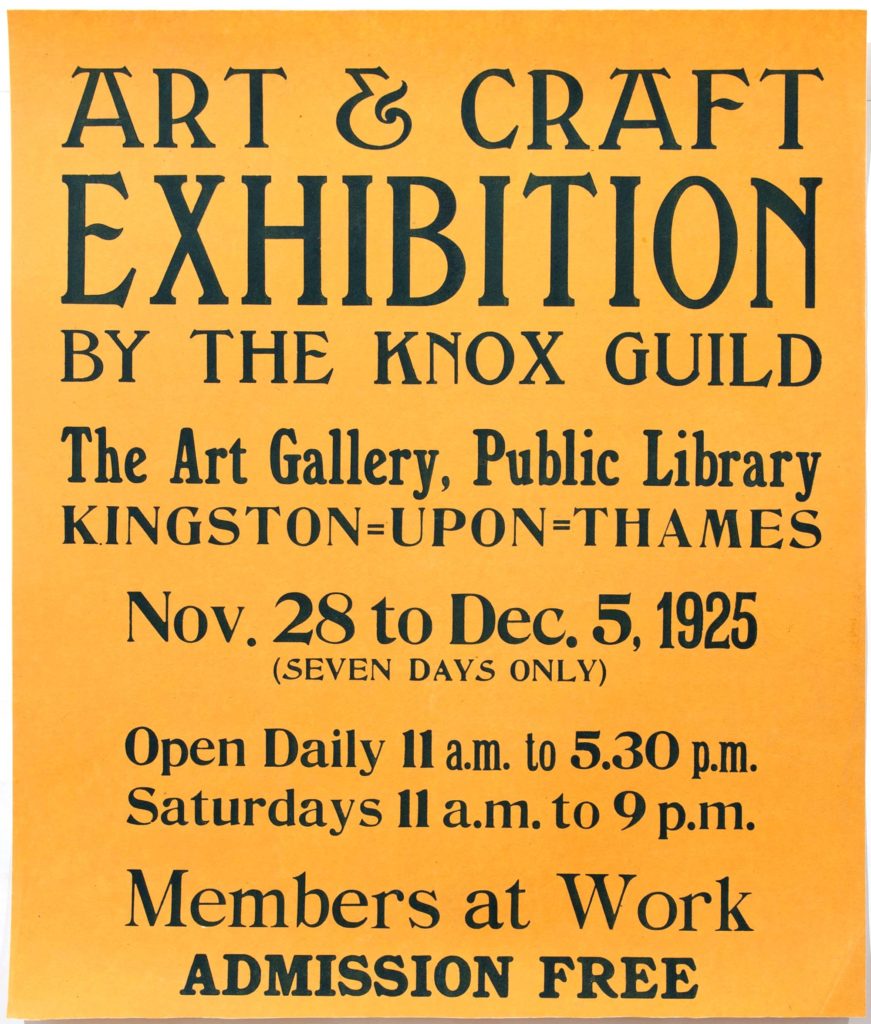 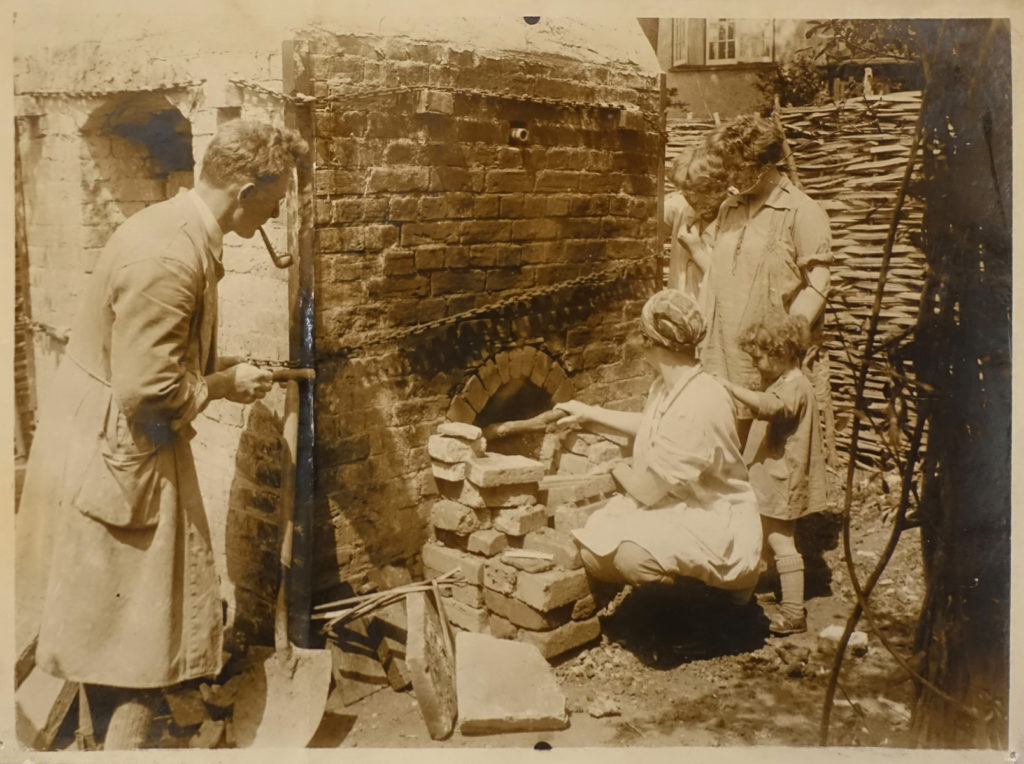 The Wrens with two students around a kiln at the Oxshott Pottery, 1926. Courtesy Kingston Museum 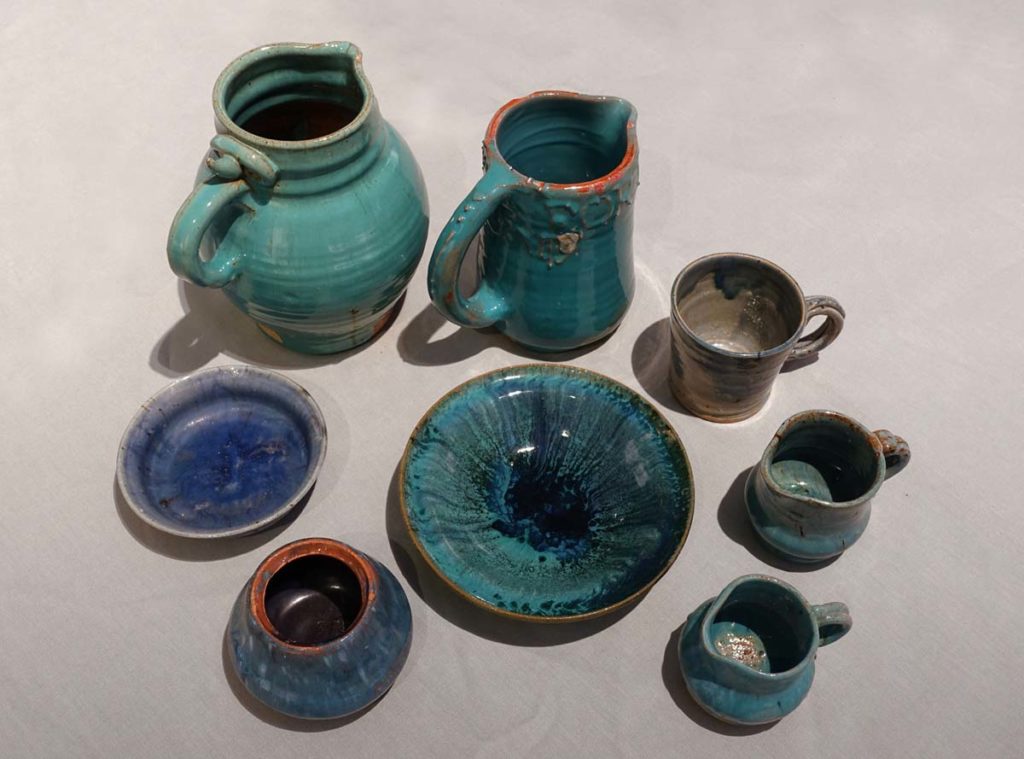 In a photograph dating to 1926 you can see Henry smoking his pipe while Denise stands with her young daughter Rosemary and two students in front of one of the kilns. Perhaps not surprisingly, Rosemary grew up to be an accomplished potter in her own right.

The bowls, jugs and plates are examples of the type of functional wheel-thrown earthenware that Denise Wren made at Oxshott during the 1920s and 1930s. She sold her pottery at agricultural and horticultural shows like the Chelsea Flower Show and at craft exhibitions.

‘Messrs Oxshott Pottery’ was included in the British Empire Exhibition at Wembley in 1924-1925. During interviews, the press usually assumed that Henry Wren was the potter while Denise Wren was his assistant. In fact, she made the vast majority of the ceramics while Henry organised the displays.

Blue, green, yellow, orange and brown were the preferred colours for glazes. Although she used commercial glazes made by firms like Wenger’s, who supplied Midlands potteries, she was creative in her approach. Wren taught her students that the only way to find out the effect of different combinations of glazes on the finished ceramic was to experiment repeatedly and note the outcomes.

When Wren started the Oxshott Pottery, there were very few kilns available for potters who wanted to produce on a small scale. She imported her first kiln, a Drakenfeld, from the US and subsequently designed three or four different models of kiln and sold plans and instructions on how to build these kilns to amateur studio potters all over the world. 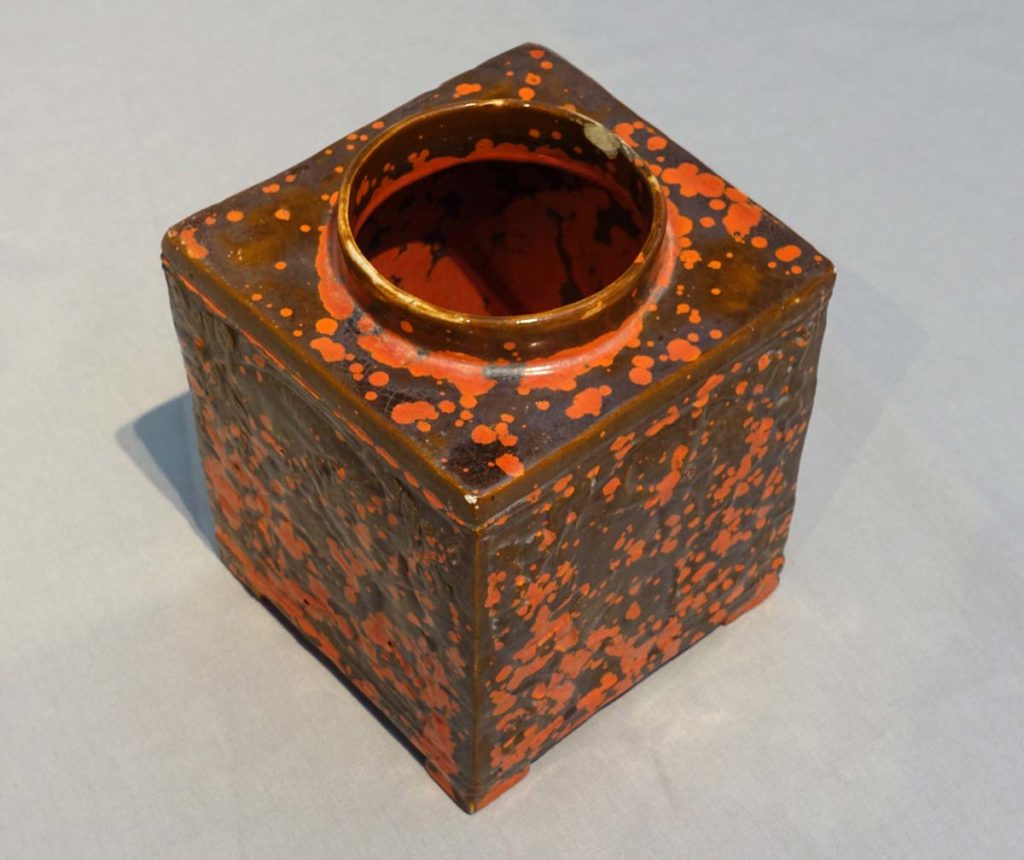 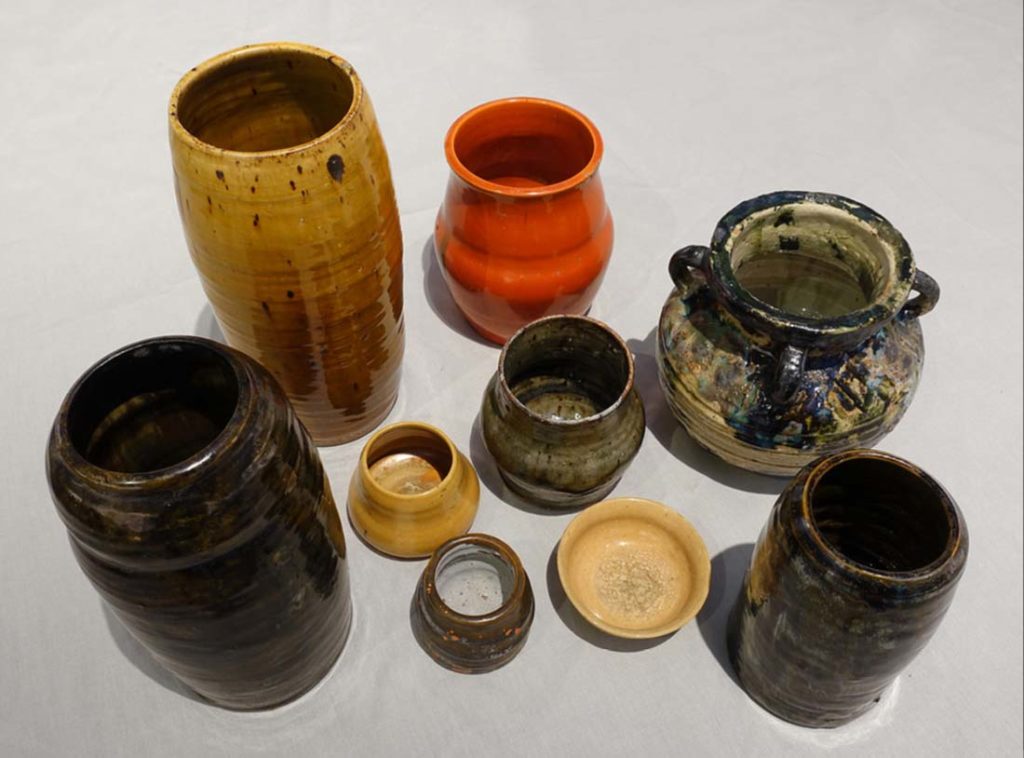 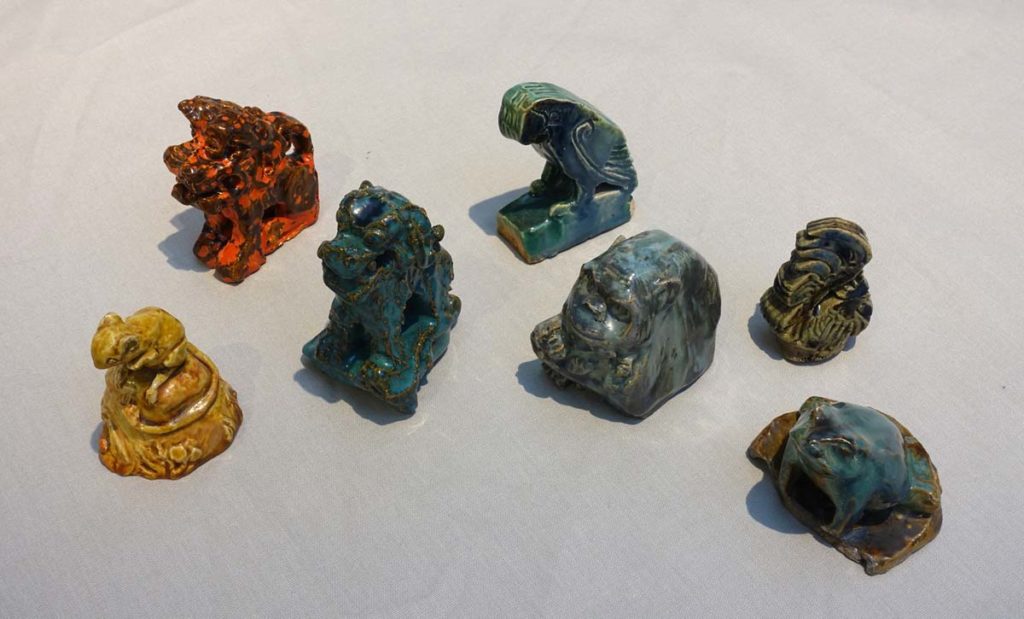 The square pot was made by pressing slabs of clay into a mould before firing and then glazing and firing it again. There is a design of leaping deer and flying birds impressed on each facet, though the ‘stormy sunset’ glaze obscures it. Wren was inspired by the deer she saw in Richmond Park and the bright orange colour comes from using depleted uranium in the glaze! Potters in the first half of the 20th century regularly used dangerous substances such as heavy metals, which have since been phased out on health and safety grounds.

In Pottery: Finger-Built Methods (I. Pitman, 1932) Henry Wren writes: ‘The potter’s wheel, though ancient, is a latecomer in pottery making…there is hardly a pot anywhere that you cannot almost equally well build up with coils or by some other non-wheel process’.

The Wrens advocated methods like slab-building and finger-building which they considered more universally accessible than throwing pots on the wheel. This contrasted with the attitudes of most other studio potters of the era, who focused on wheel-thrown pots.

The cute animal figurines were made from plaster of Paris moulds. They represent a gerboa (a small rodent), two Chinese-style lions, a parakeet, a baboon holding a baby, a cockerel and a frog, Denise loved animals and kept parakeets and bees at Oxshott.

Later in life she became known for her trademark elephants, made from roughly modelled clay. Wren’s daughter Rosemary Wren specialised in modelling animals, though her style of working was distinctly her own. 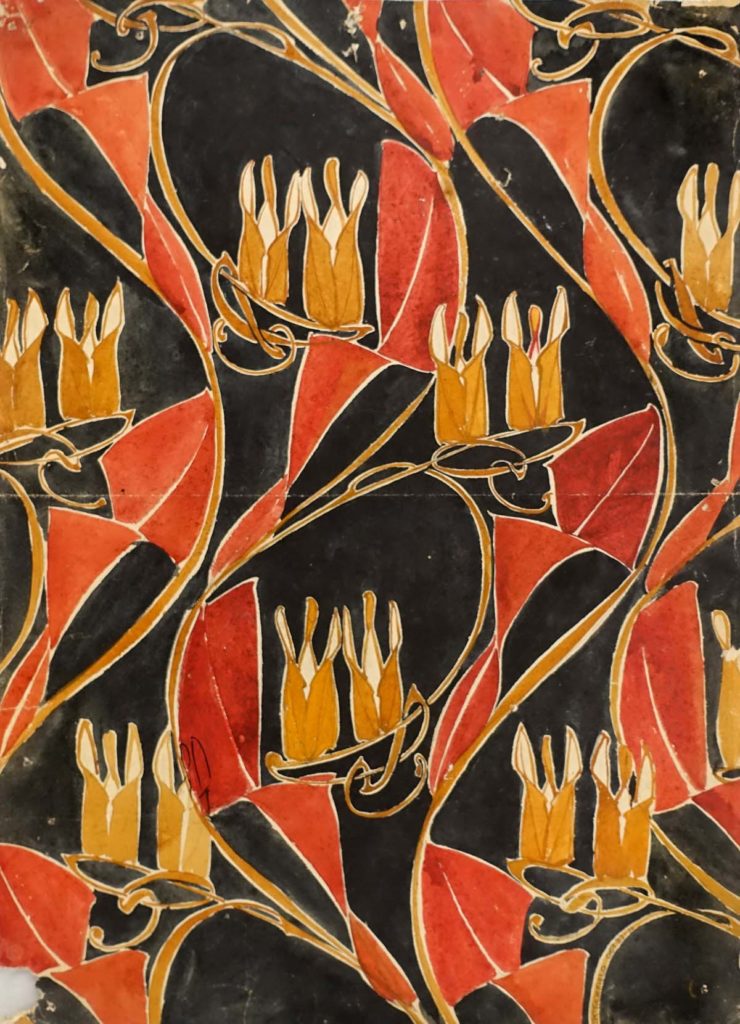 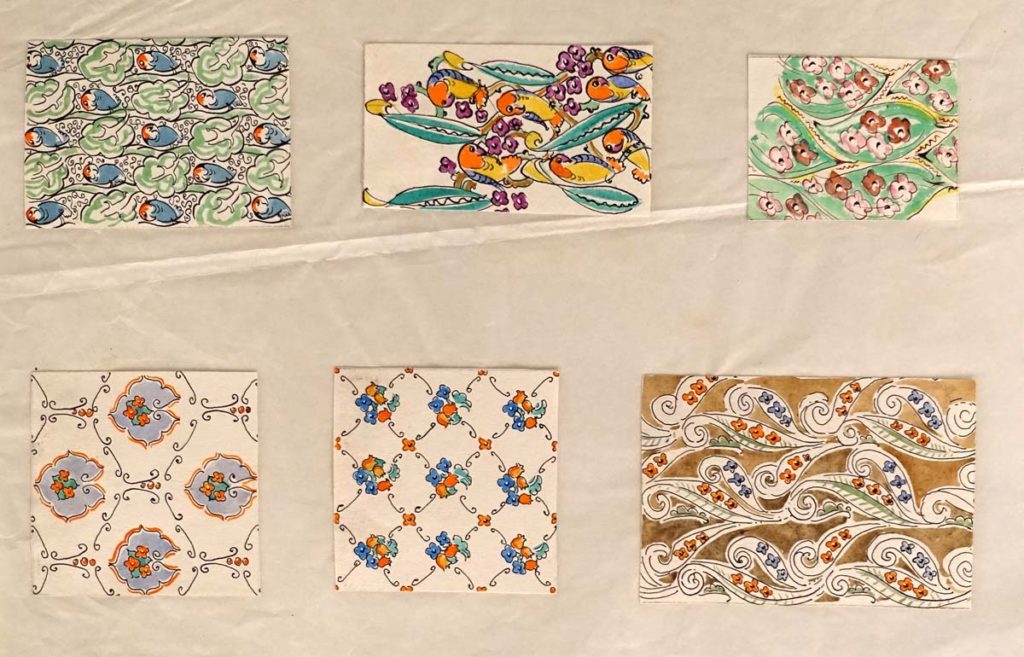 Wren had another string to her bow. From the late 1930s sales of pottery were slow and she turned to designing textiles to make ends meet.

At first, she adapted some of the Art Nouveau style designs she had created as a student. Archibald Knox had produced textile designs for the Silver Studio, sold through Liberty. And in 1913 after she left Kingston School of Art, she worked for a few months in the design department at Liberty’s. However, she claimed that the designers were encouraged to plagiarise the work of others, so she quit in protest.

“saltglazed stoneware ceramics finally brought renown to Wren, who was by then in her sixties”

Kingston Museum has records of 150 designs for fabric that Wren produced between the 1930s and 1950s. She developed a contemporary style of lively, small-scale prints, with many plant and animal motifs in bright colours. She sold mainly to Manchester textile firms, though also designed a few patterns bought by Liberty.

So Knox’s training and belief that his students could design in any medium came to fruition in Denise Wren’s output.

Post war, inspired by her daughter Rosemary, Wren began making saltglazed stoneware. This method involves adding salt to the kiln, which reacts with the clay, often giving an orange-peel like texture in a dark colour. Mother and daughter become known for reviving this technique and they displayed and sold their wares at the Craftsman Potters’ Association Gallery in the West End. These saltglazed stoneware ceramics finally brought renown to Wren, who was by then in her sixties. 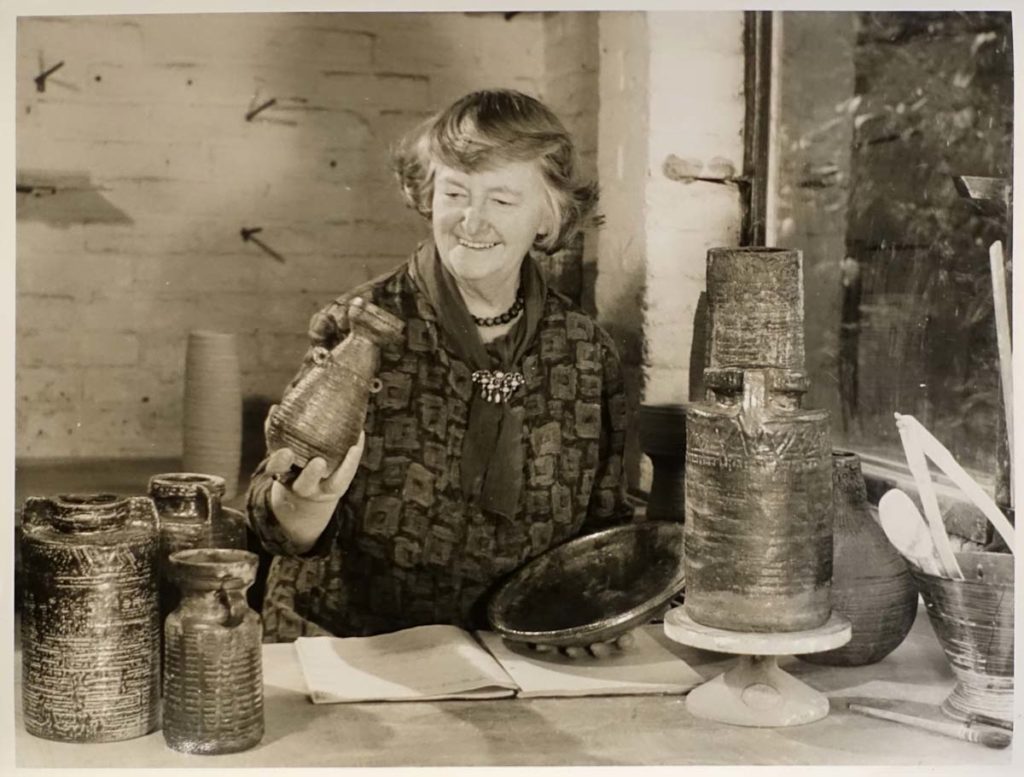 Denise Wren at Oxshott in 1968 with her saltglazed stoneware pots from the Commonwealth Institute Exhibition of 1967. Courtesy Kingston Museum

Today, Denise Wren is increasingly recognised as an innovative studio potter who worked at the grassroots, disseminating her craft through teaching, exhibitions and publications. The public can view the Wren Collection by appointment at Kingston Museum and we hope to create a display of Wren material in our galleries at a future date.

Kingston Museum was built in 1904, and restored between 1992 and 1997. There are three permanent galleries: Ancient Origins, Eadweard Muybridge and Town of Kings. The Art Gallery hosts a range of national and local temporary exhibitions. There are events and activities for children, a talks series for adults and…