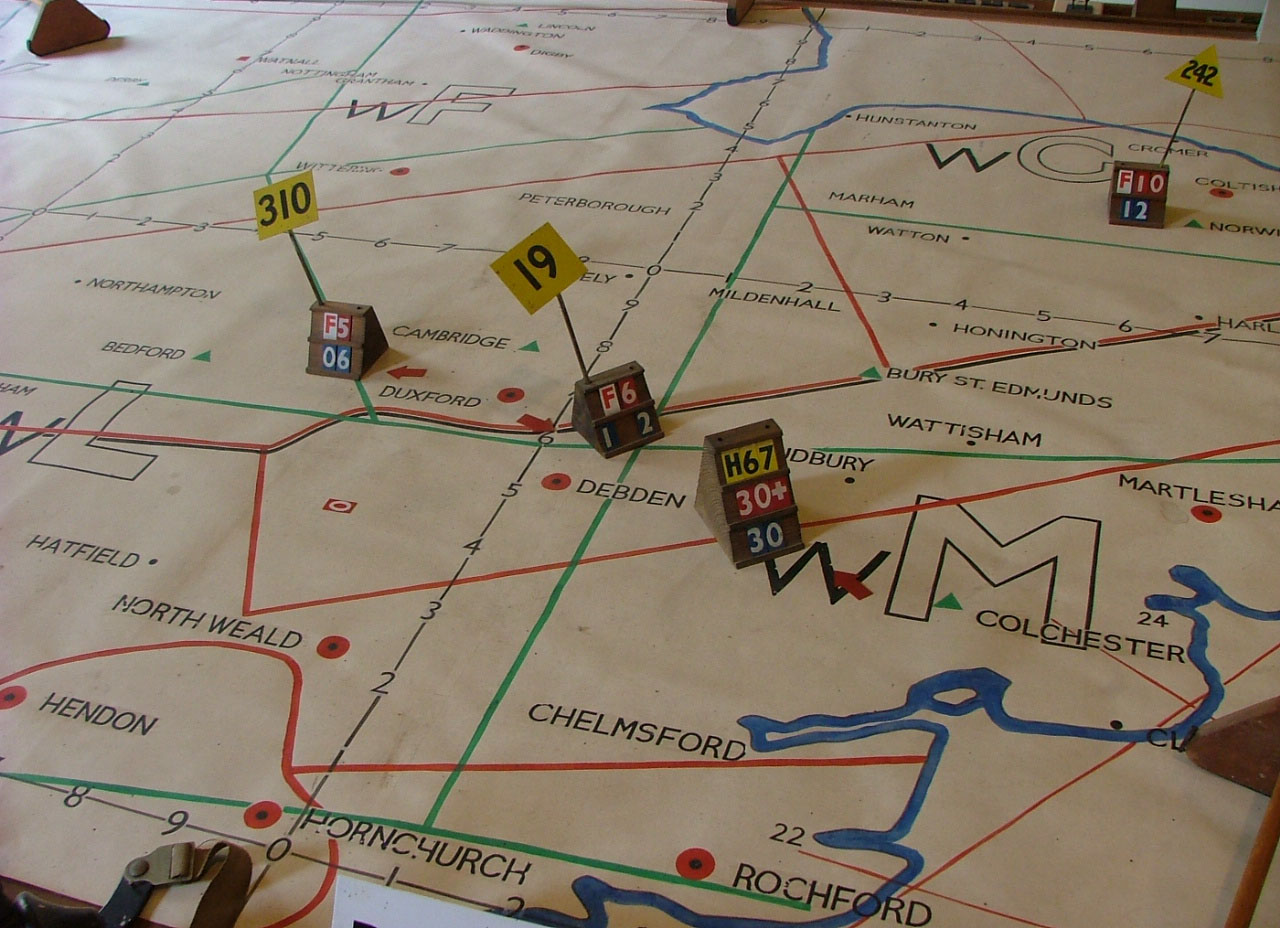 The Battle of Britain plotting table in the Ops Room at IWM Duxford. Photo Richard Moss

Step inside the Ops Room at Imperial War Museum Duxford

It doesn’t matter if it was a documentary or a movie – if you have ever seen a film about the Battle of Britain, the Operations Room at Duxford will seem like a familiar place.

The nerve centre of the Battle, the “Ops Room” – whether at HQ or airbase level – was the setting for the vital collation, plotting and dissemination of information to the fighter squadrons who scrambled to engage the Luftwaffe bombers and their fighter escorts.

And even today at Duxford, 70-odd years since the height of the Battle of Britain, the Ops Room is an atmospheric location.

“There was certainly a lot of drama to be had between the people on the ground who were issuing instructions to the people in the air,” says Imperial War Museum Duxford’s Head of Collections, Stephen Woolford, as we stand above the plotting tables, switchboards and wall charts with their mysterious cyphers. 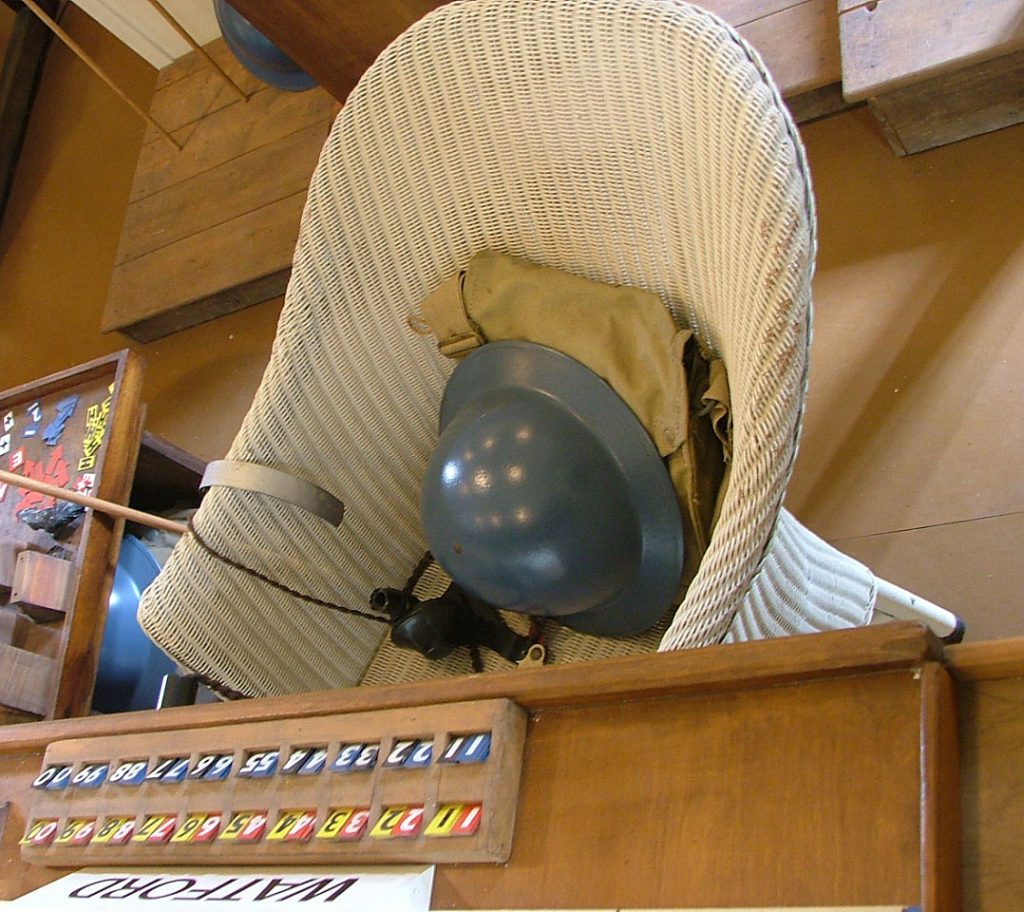 A wicker chair with RAF helmet and gas mask waits next to the plotting table. Photo Richard Moss

The atmosphere is heightened when the original Tannoy crackles into life. “You can hear what was happening in the air so you get that drama of the people following the action,” says Woolford, as a convincing recreation of the attack on Duxford in August 1940 fills the room.

All the familiar props are in place, from the central plotting map table with names like Wattisham, Mildenhall, Debden and Hornchurch – carefully marked with red circles – down to the wicker chairs where headphones, gas masks and RAF blue tin helmets lie waiting for WAAFs to arrive and plot the deadly aerial battle.

On the wall hangs an iconic RAF Operations Room Plotting Clock with its painted dial divided into coloured triangles of red, yellow and blue for 2½ minute periods, correlating to the coloured pieces on the map table. The detail is meticulous. 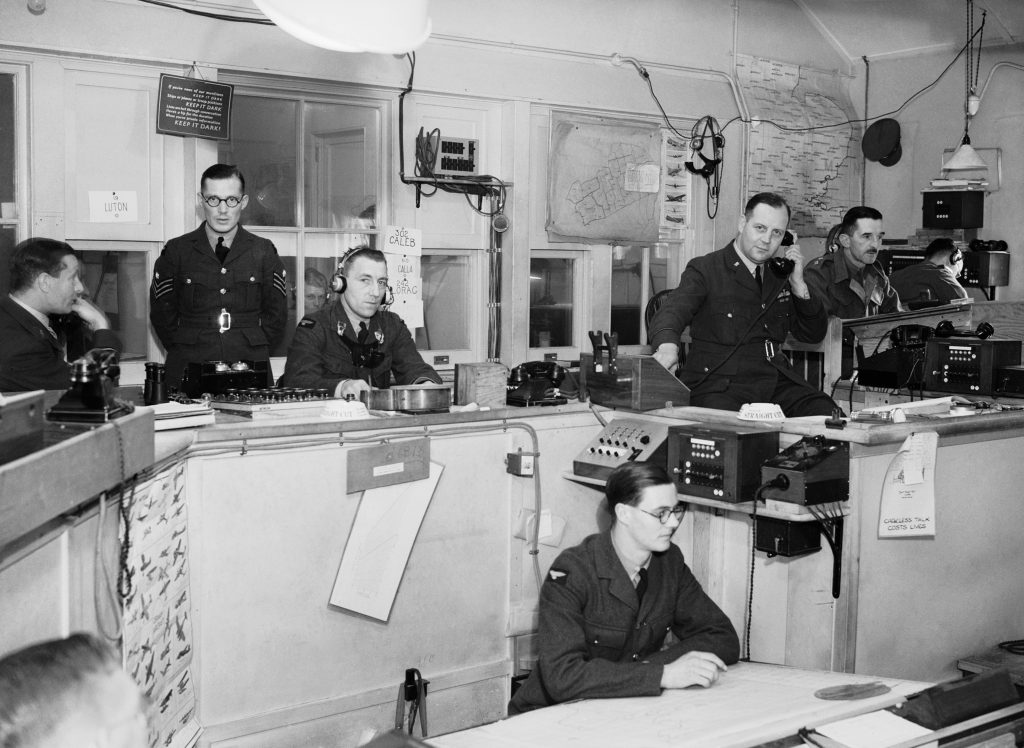 Interior of the Sector ‘G’ Operations Room at Duxford, Cambridgeshire. The callsigns of fighter squadrons controlled by this Sector can be seen on the wall behind the operator sitting third from left. The Controller is sitting fifth from the left, and on the extreme right, behind the Army Liaison Officer, are the R/T operators in direct touch with the aircraft. Copyright IWM (CH 1401) 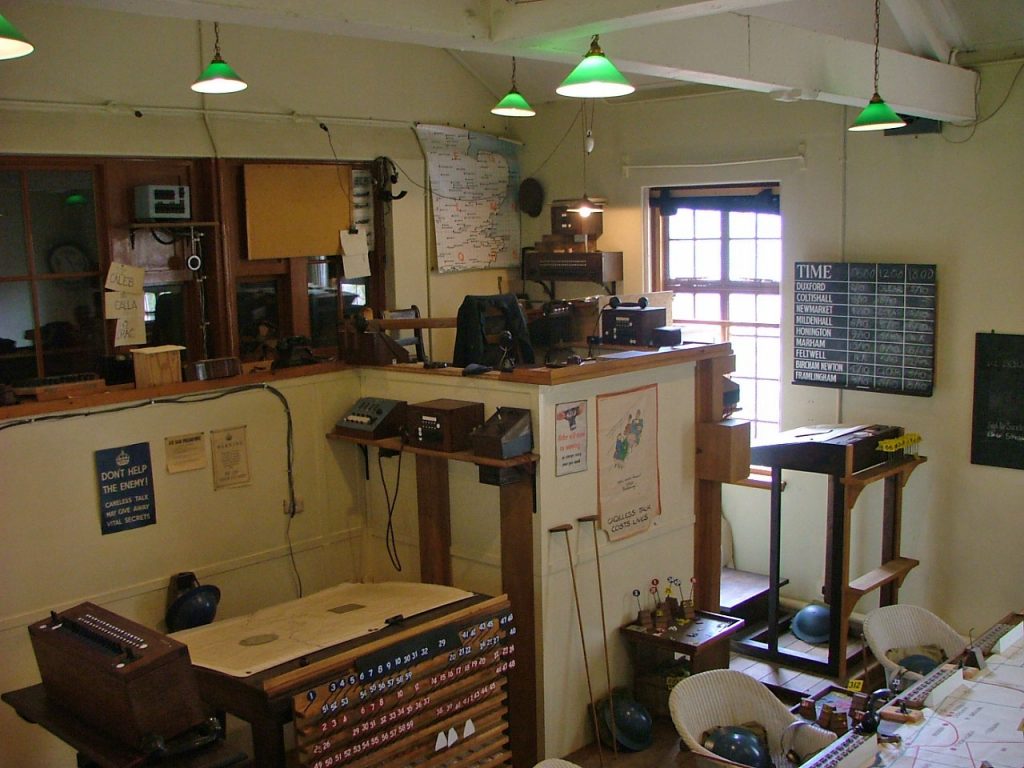 Woolford was charged with reconstructing the room in the 1980s after the IWM had taken over the former RAF airbase a decade earlier.

“What we’re looking at here is in fact a reconstruction of what this room looked like in 1940,” he says.

“It was an absolutely fascinating project, and an opportunity to get involved in a very detailed and important piece of history to do with the Battle of Britain – one of the key issues that helped Britain win was how they directed their fighters into combat.

“The Battle of Britain RAF Ops Room had its roots in the First World War when early warning systems were used to spot Zeppelin raiders, the movements of which were carefully plotted in a control room much like the one we’re standing in now.” 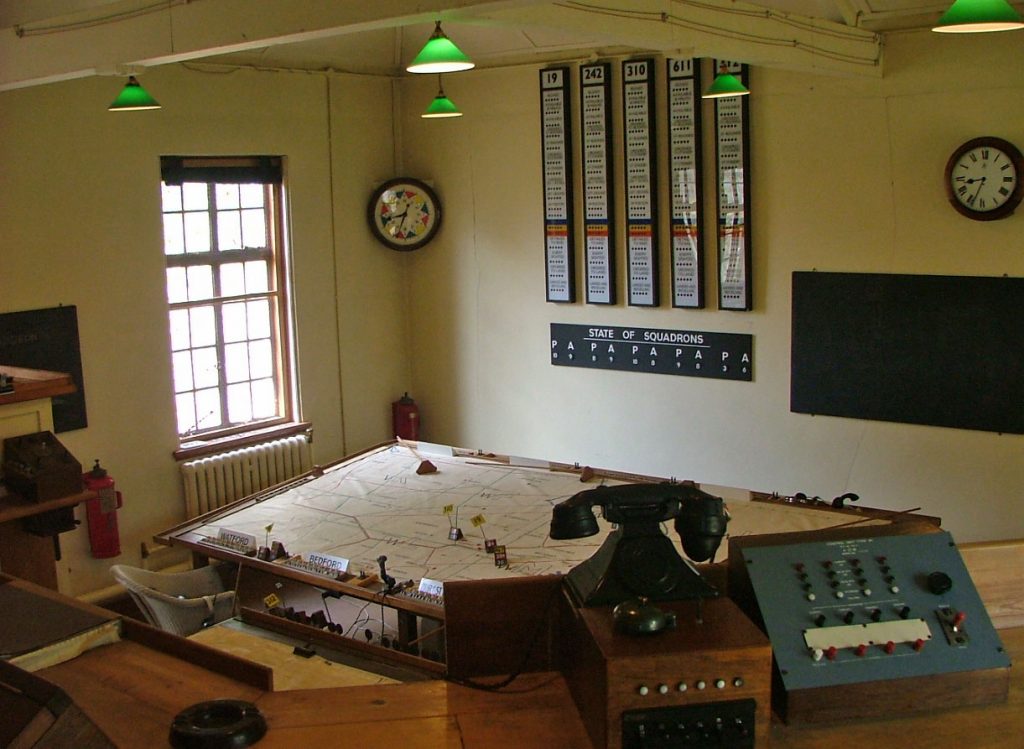 By the time of the Armistice it was a tried and tested method that survived to form the basis of the command and control system of Fighter Command.

However, the big technical change that helped tip the balance was the development of radar.

“From the mid-1930s onwards the British put a lot of emphasis on it, developing a chain of radar stations around the UK known as Chain Home and Chain High for high coverage and low coverage,” explains Woolford.

“The weakness of radar was that it only looked out to the sea, but it gave sufficient early warning to alert the controllers in the operations room to think about where they should place their fighter aircraft.”

Once enemy aircraft had crossed the English coast it was up to the spotters of the Observer Corps to track them. Once the information came in from a radar station, or from Observer Corps spotters, it went to the headquarters at Bentley Priory, whose controllers passed it out to a whole series of rooms like the one at Duxford. 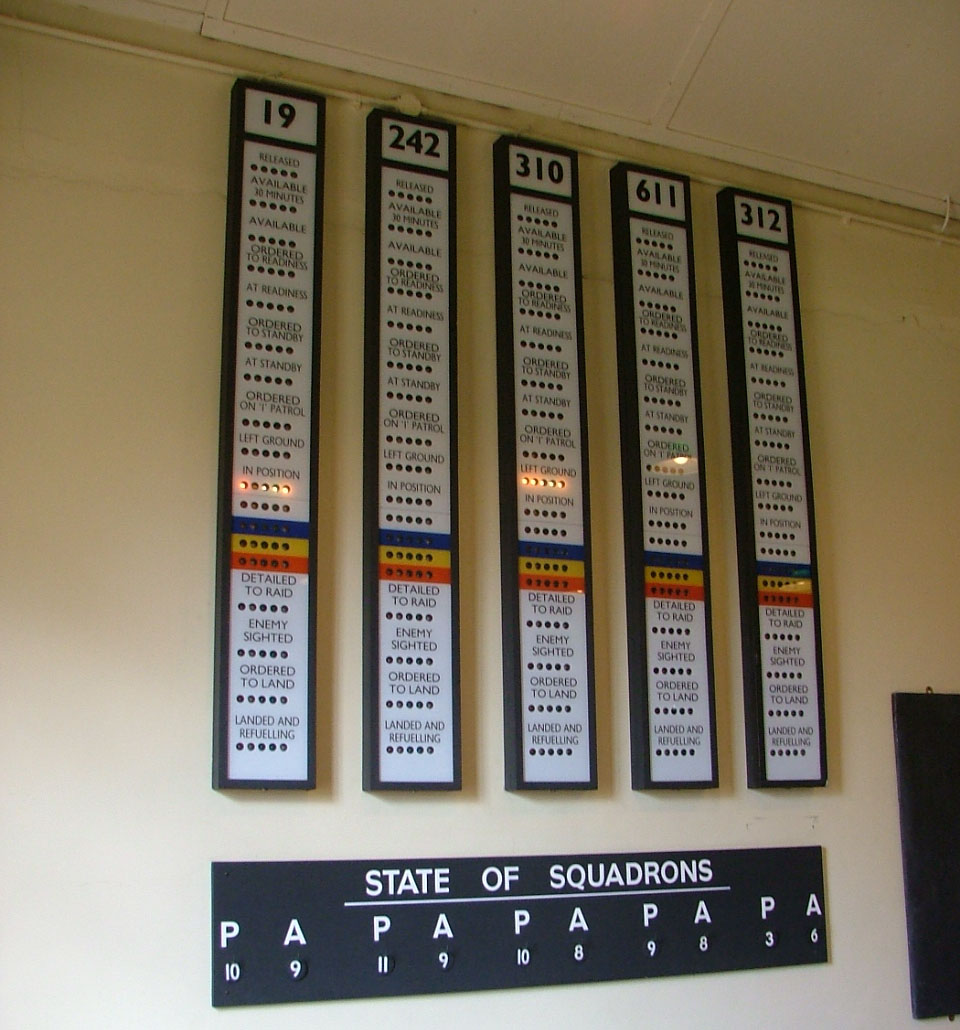 The status boards bear the names of the famous Squadrons that flew out of Duxford. Photo Richard Moss

The pre-war date came with pre-war protection too. At Duxford, in common with most of the operations blocks at airfield level, the room was incredibly vulnerable. The only fortification came from the brick blast walls that still welcome visitors to the historic site today.

“It’s a brick bungalow basically,” says Woolford. “There’s no strengthening up there or anything – so a direct hit in a room like this would have been devastating.”

Fortunately for the Duxford Ops Room staff of WAAFs and RAF officers, the raids that hit the airfield during the Battle of Britain didn’t “take them out” – as happened at the frontline fighter station, Biggin Hill.

“Luckily they [Biggin Hill] did have a back-up,” adds Woolford, “but if you keep hitting people hard enough and you keep disrupting their command and control system then they are not going to be able to fight so efficiently. 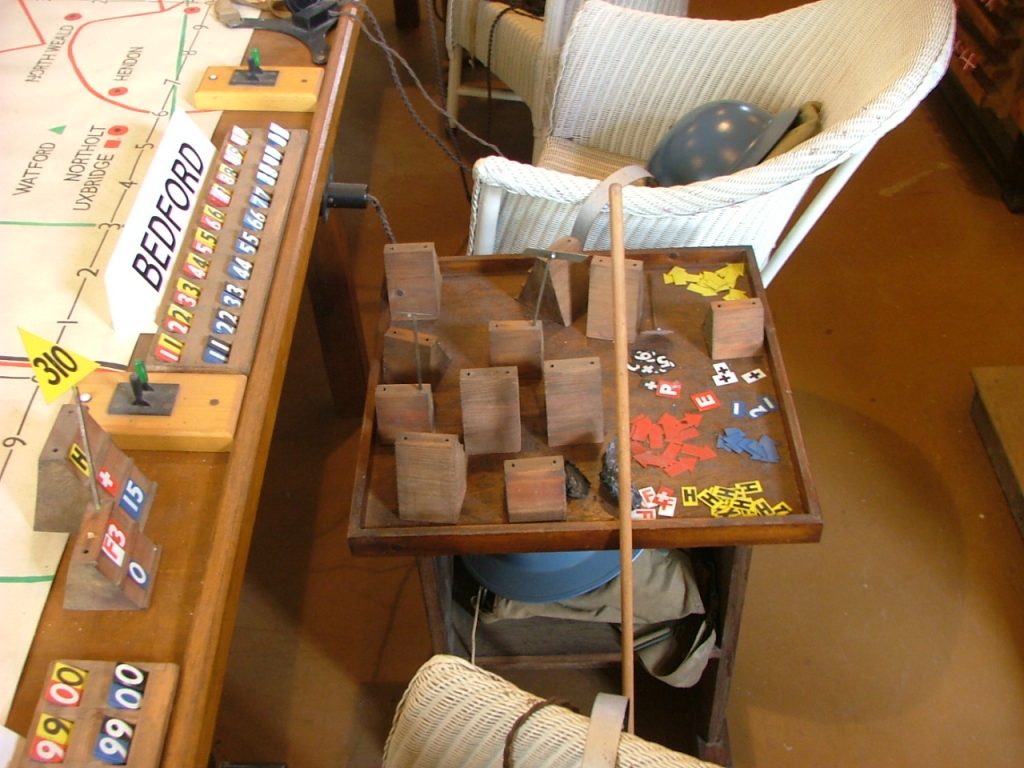 The tools of the trade for the WAAFs who operated the plotting table. Photo Richard Moss

“Perhaps the best illustration of success in the Battle is demonstrated by the fact that the latter didn’t happen and the RAF managed to continue to put up fighter aircraft in sufficient numbers to cause the Germans significant damage.”

Today the Duxford Ops Room might be a calmer place, but the names, the memories and the atmosphere make it a key place if you want to step back in time, and get just a little bit closer to the finest hour.

IWM Duxford is Europe’s largest air museum with over 300 aircraft and objects on display. Get up close to Spitfires and Hurricanes; see a portion of the original Wright Brother plane; walk through Concorde, feel dwarfed by the size of a B-52 and stand in awe of Europe’s only SR-71…