The young Jamaican African boy peering out from a nineteenth century photograph found by the curator of a timely new exhibition at the International Slavery Museum may be unknown and slowly vanishing into the paper, but says Jean-Francois Manicom, “he is for me the representation of all the unnamed people who suffered in slavery.”

Manicom has curated the Liverpool museum’s tenth anniversary exhibition, Ink and blood: Stories of Abolition, which shows abolition up close through ink (paper) and blood (people), via personal stories from Argentina, Cuba, Jamaica, the United States and Bahrain.

Born in Guadeloupe, Manicom has spent most of his life collecting photographs “taken in the Caribbean region since the early start of photography” and most of the pictures in the new exhibition come from his personal collection.

A photograph of a “Young negro from Saint Pierre” was acquired in a French auction and his dress suggests that he may have been a horseman or a butler in the house.

“This photo is exceptional because the man is an adult at a time after the abolition of slavery and before the volcano eruption of the Montagne Pelée, which totally destroyed Saint Pierre,” says Manicom.

“I have no specific information about who he was, for whom he worked and in which plantation, but given his age on the picture (25 maybe) he was born about ten years after the abolition (1848 in the French Caribbean), but enslaved people were forced to stay on the plantation to work for the “master” under the system of apprenticeship.” 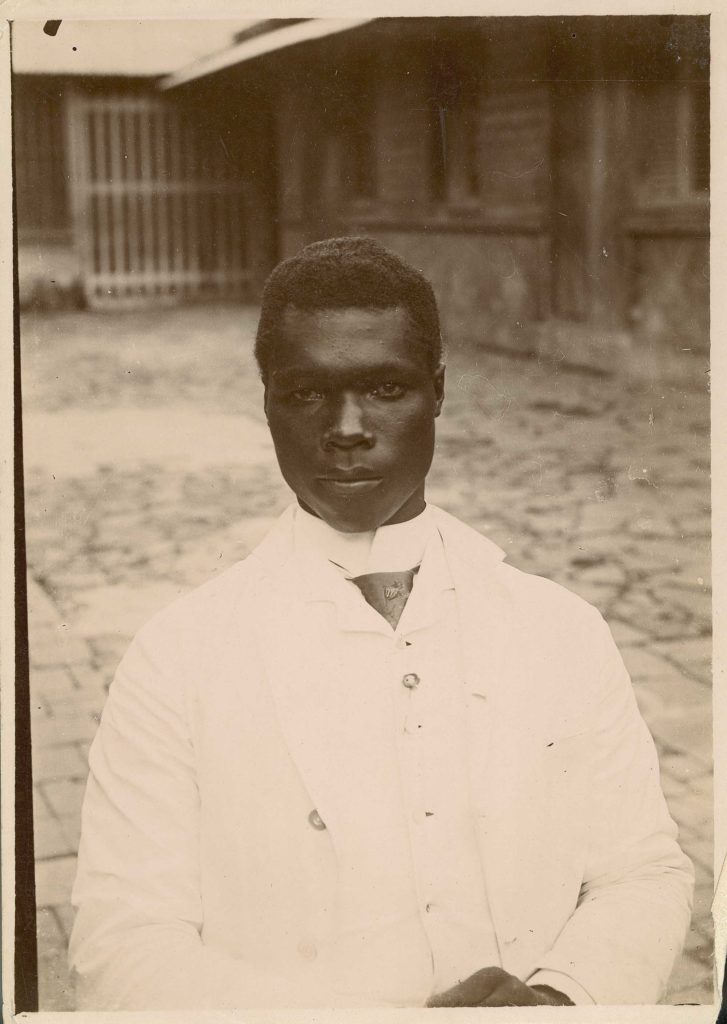 The exhibition also includes Manicom’s collection of stereo views, showing slaves at work in the field, the depiction of which were part of a photographic trend that a thirst to find out more about the world in 19th century America and the UK.

Visitors can use a stereo viewer to take a closer look ‘exotic’ photos like “A Rice Raft in South Carolina” and “Coffee Pickers in Guadaloupe”, which says Manicom, are photos taken just after slavery “but showing exactly the same postures, attitudes, bodies, and work conditions as in times of slavery.”

“This collection is called West Indies, made by Keystone,” he adds, “at the time there was no TV or cinema and no one working in the newspapers who knew how to print pictures; the only way to look at the world and have an idea of it was via stereoscopic pictures.”

At the back of each these stereoscopic photos are comments made at the time, which says Manicom, “reflect colonialist attitudes”, and visitors to the exhibition are invited to read them and draw their own judgments, whilst getting an idea of the 3-D vision invented by the stereoscopic technique.

As well as the photographs, the museum is displaying a number of powerful artefacts including a plantation stock book for Roslin Castle Estate in Jamaica. The book has never been on public display before and offers a crucial and touching insight into life on a Jamaican plantation.

From 1791 to 1813, the owner of the plantation meticulously did his accounting. Year after year, he wrote down the births, the deaths, the purchase and sales of his slaves, exactly as he did for his cattle. 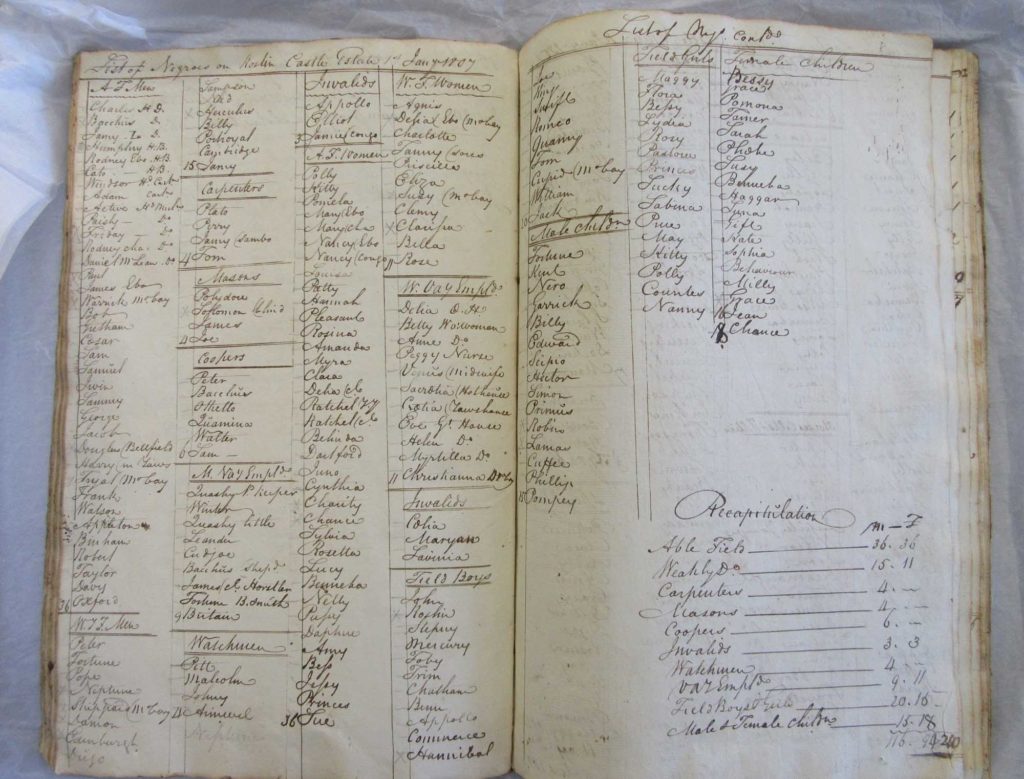 “Georgetown: Mr Wang, me and the Crew” © Private Collection

“Beyond the coldness of the accounting style, this book is also a window opened onto the lives of Mary, John or Peter,” says Manicom. “It allows us to grasp, even fleetingly, the lives of those men, women and children deprived of their identity and treated without any human dignity.”

The book details the different trades and occupations of the plantation slaves. James and Joe were masons, Plato, Perry and Sam (also marked as “Sambo”) were carpenters, Othello and Walter were coopers. But for most – even for slave children as young as five (referred to here as “field boys” and “field girls”) it was a life of hard toil.

But says, Manicom, there is something positive, however slight, to be taken from the cold and dispassionate ledger.

“It gives us a sense of the hope that animated those people who would, a few years later, become the people of Jamaica” he says.

Since opening its doors in 2007 – the bicentenary year of the abolition of the British slave trade and the annual date of Slavery Remembrance Day – the International Slavery Museum has highlighted the international importance of enslavement and slavery, both in a historic and modern context, through permanent displays, temporary exhibitions and events.

Its collection includes shackles, weapons, artworks and powerful artefacts from West Africa, Europe, The Caribbean and North America as well as documents and objects that trace the history of the abolition movement.

Working in partnership with other organisations with a focus on freedom and enslavement, the Museum also provides opportunities for greater awareness and understanding of the legacies of slavery today. 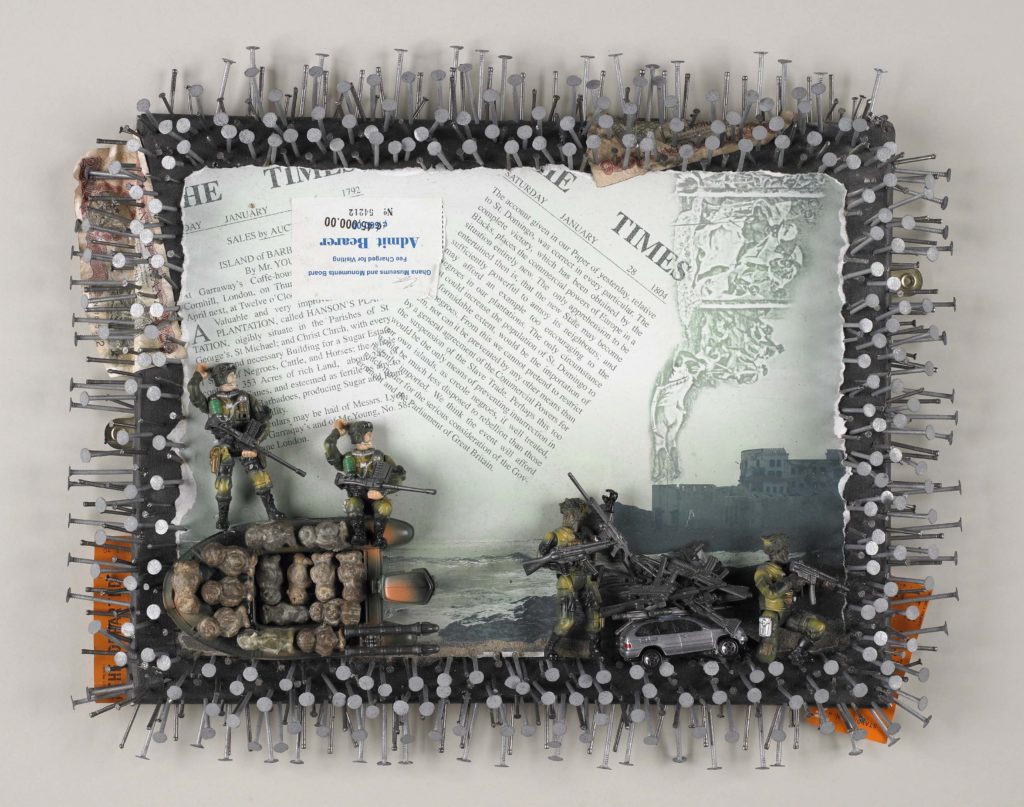 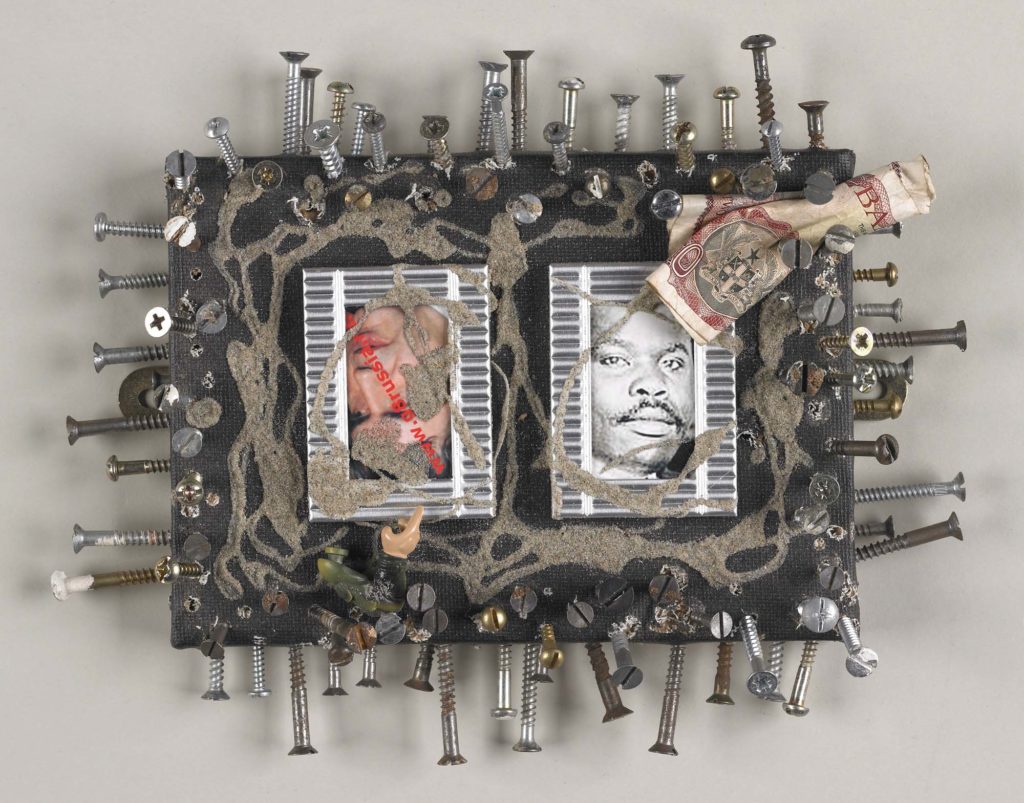 Writer and abolitionist Olaudah Equiano (1745-97) was considered highly influential in ending the African slave trade for Britain and its colonies, through his campaigning and 1789 autobiography, ‘The Interesting Narrative of the Life of Olaudah Equiano, or Gustavus Vassa, the African’.

Kidnapped from his African village when he was just a child, Equiano was enslaved and taken to the West Indies where he experienced terrible abuse and suffering. Eventually, he managed to buy his own freedom and reached England, where he took an active part in campaigning to end the British slave trade.

Arranged like a map of Great Britain, it includes portraits of famous participants in the Transatlantic Slave Trade and imagery from the artist’s visit to Cape Coast Castle in Ghana.

Ink and blood: Stories of abolition opens at the International Slavery Museum on August 21 2017 and runs until April 8 2018. For more information see www.liverpoolmuseums.org.uk/inkandblood and #inkandblood.

The International Slavery Museum highlights the international importance of slavery, both in a historic and contemporary context. Working in partnership with other museums with a focus on freedom and enslavement, the museum provides opportunities for greater awareness and understanding of the legacy of slavery today. It is located in Liverpool's…