Is there anything new to be said about Eric Ravilious? More than any other mid-century artist, the Sussex-born painter-designer’s star has risen to the point where he is now one of the most popular British artists of the twentieth century, his artworks are ubiquitous and the books written about him bountiful.

Yet Ravilious remains tantalisingly elusive and difficult to place within an artistic movement, while his peripatetic practice blurs the lines between design and fine art. Even his death, in an air sea rescue flight off Iceland in September 1942, adds to the mystique of a man whose work encapsulates a palpable yet somehow vague sense of Englishness during the inter-war years.

But in his childhood home of Eastbourne they are about to mark the 75th anniversary of the artist’s death by mining a new and relatively unexplored facet of the man; his wider circle of friends and the collaborations he undertook and stimulated. 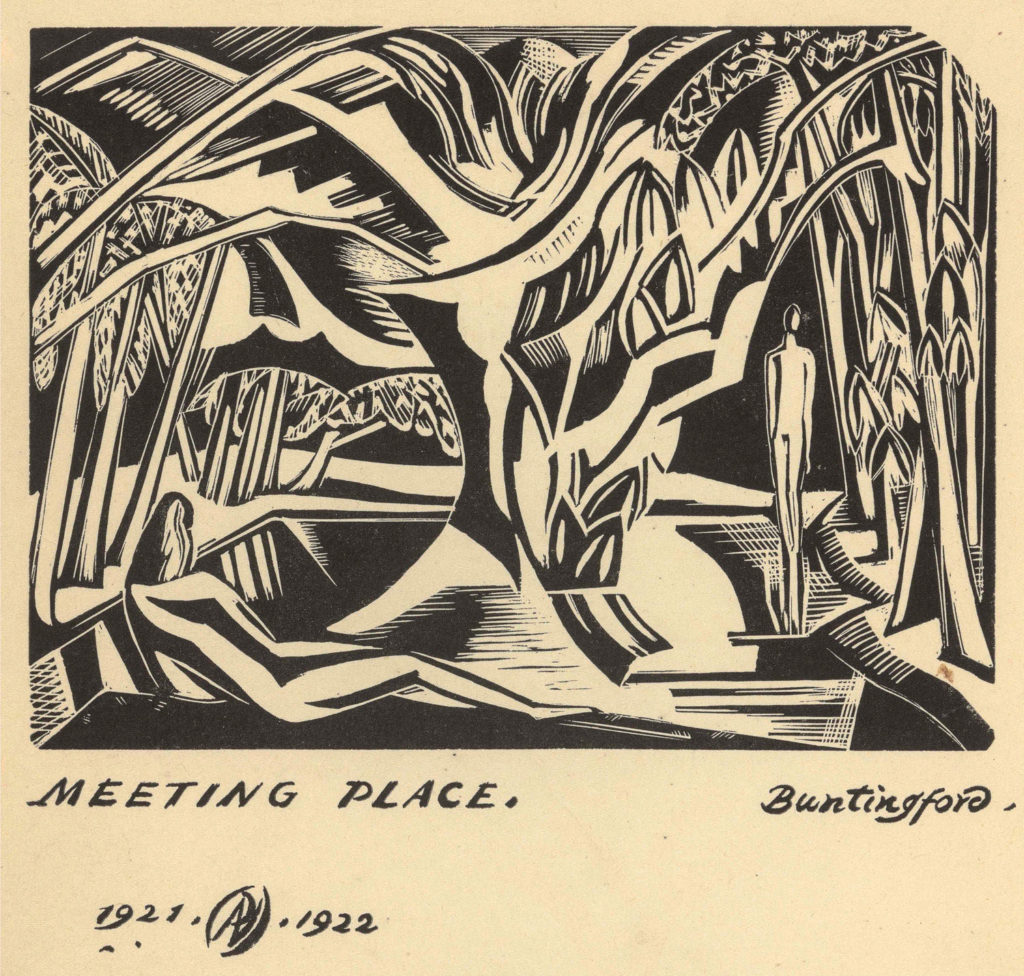 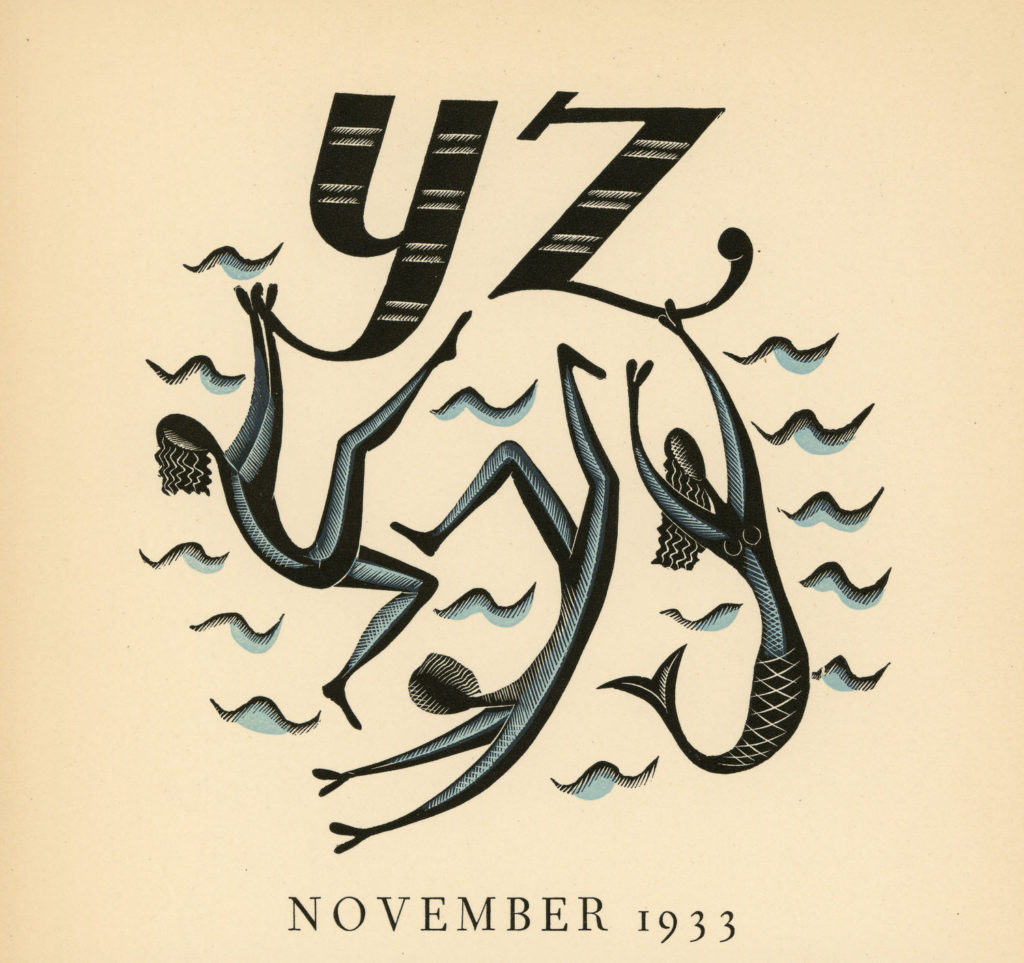 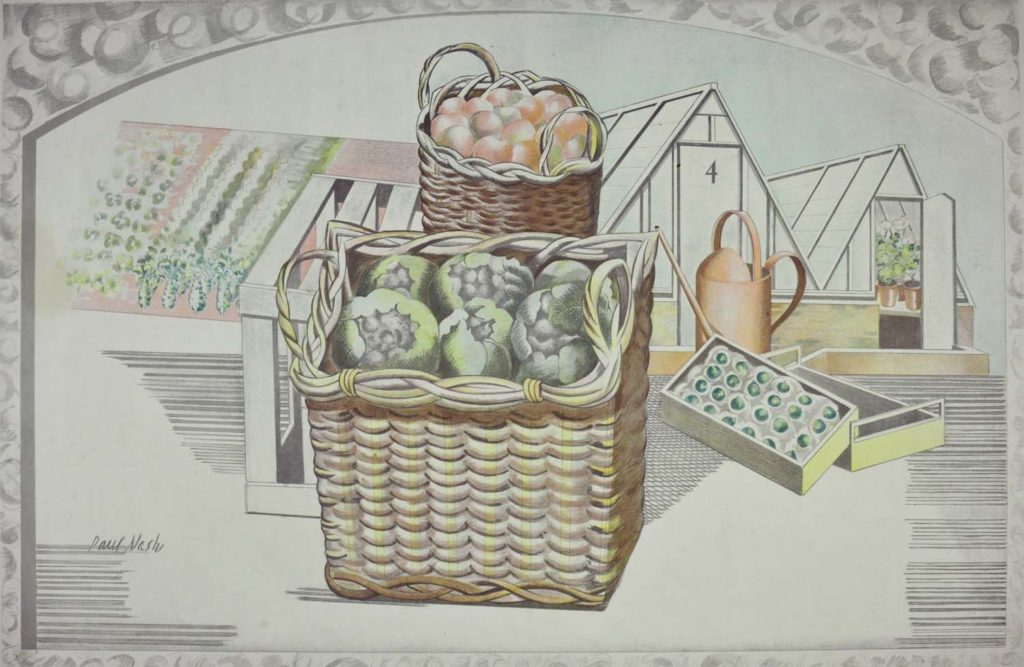 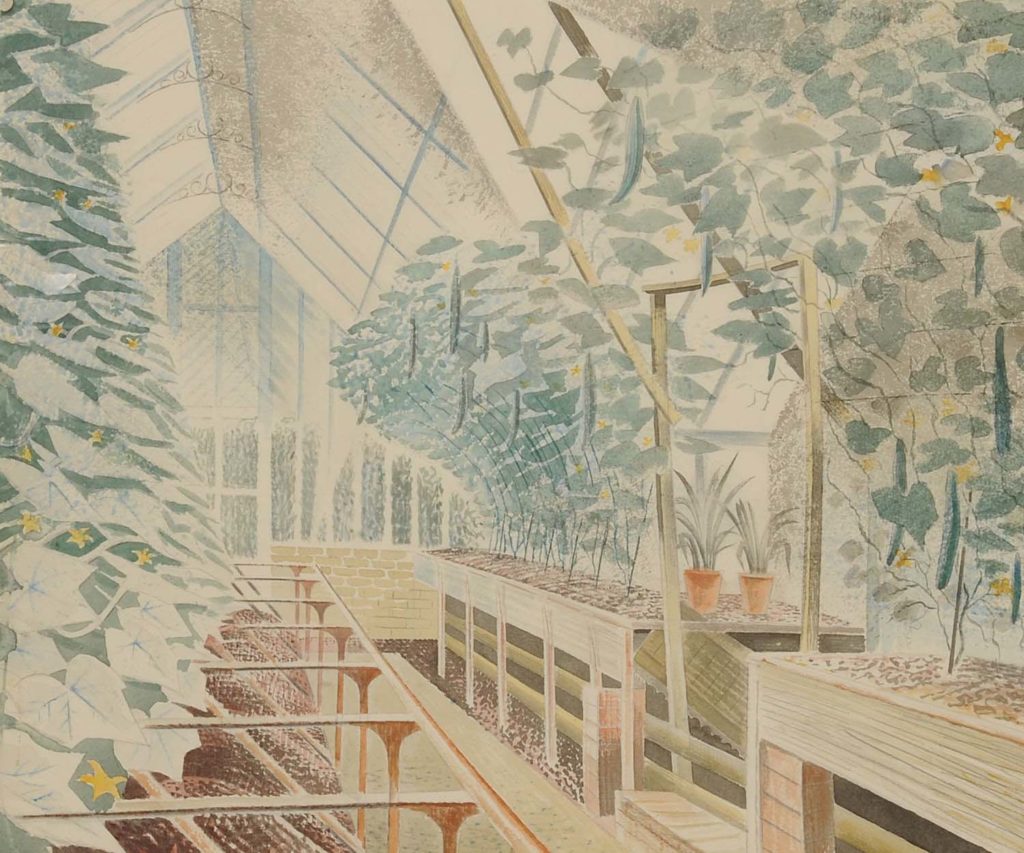 The jumping off point is the 30 days of teaching Paul Nash did at the Royal College of Art between 1924 and 1925 – a brief period that saw the coming together of a generation of artists, which included Ravilious and Bawden and a fascinating circle of people.

“Paul Nash left that group after a remarkable period of teaching at the RCA with valuable connections to outlets like the Curwen Press and with the message that if you were an artist you could turn your hand to many things,” says co-curator Andy Friend who has also written the accompanying book.

“For many of these artists, particularly the men, who tended not to come from upper class or particularly monied backgrounds, actually being able to turn their hands to all sorts of artworks led them into a world where the lines between fine art and applied arts and commercial applications were blurred.”

“A broad heterogeneous exhibition with over 300 works of art”

As you might expect the exhibition is a broad heterogeneous one, with over 330 works of art encompassing wood engraving and copper engraving, painting, lithography, fabric design, patterned papers, marbled papers and ceramic design, including – of course – Ravilious’ enduring designs for Wedgwood.

There’s also an authentic representation of a 1930s bookshop comprising nearly 100 books, book covers and illustrations by Edward Bawden, Barnett Freedman, the Nash brothers, Ravilious and those who influenced them, and a design shop, reminiscent of Dunbar Hay, a mid-century London retailer founded to encourage links between artists and industry.

The shop sold works by Ravilious, Marx and others who made significant contributions to commercial design from the end of the 1920s for Wedgwood, the BBC, London Transport, the GPO and many more. 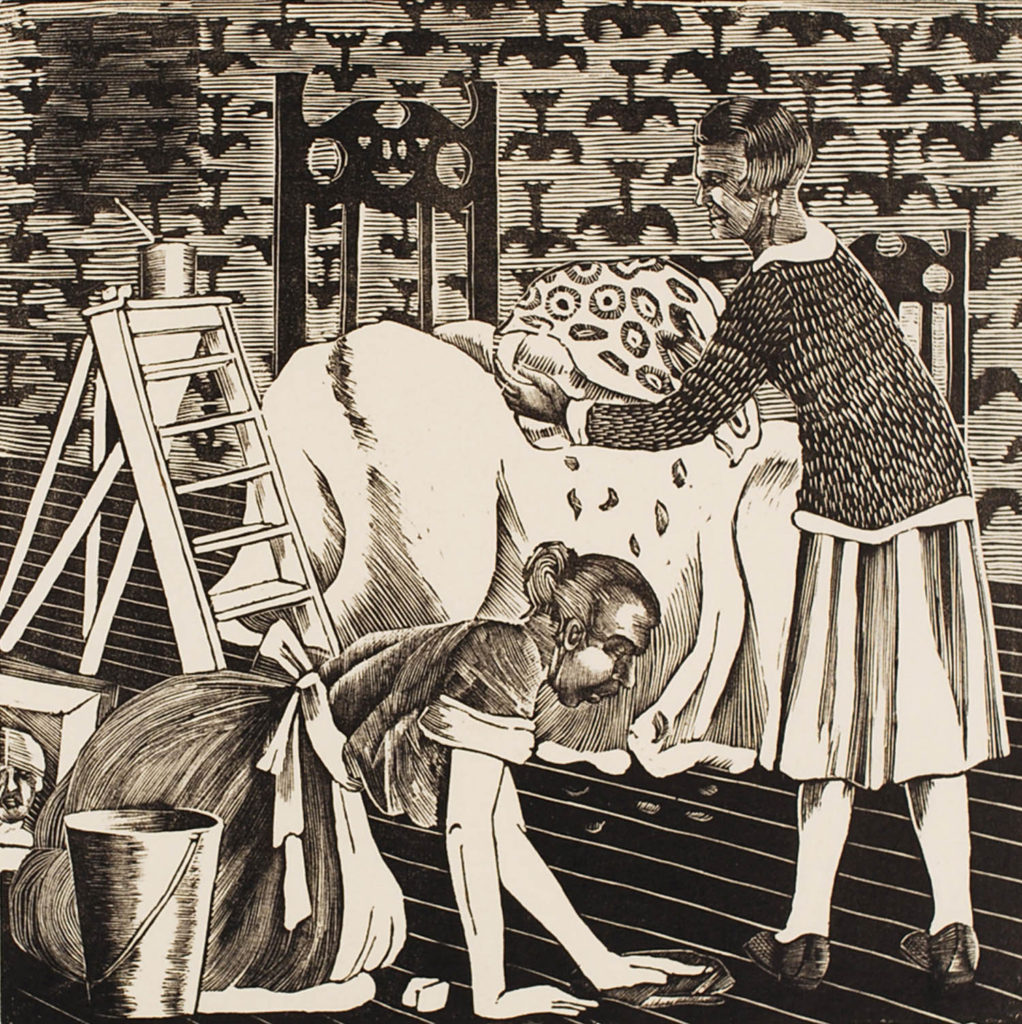 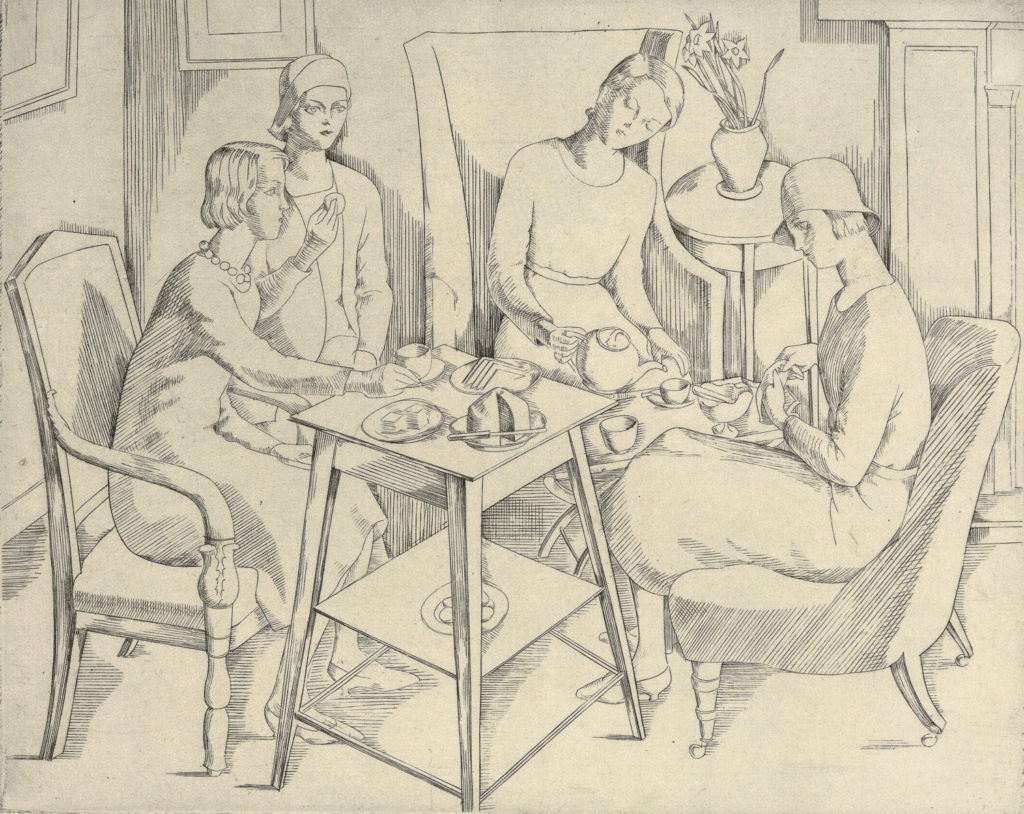 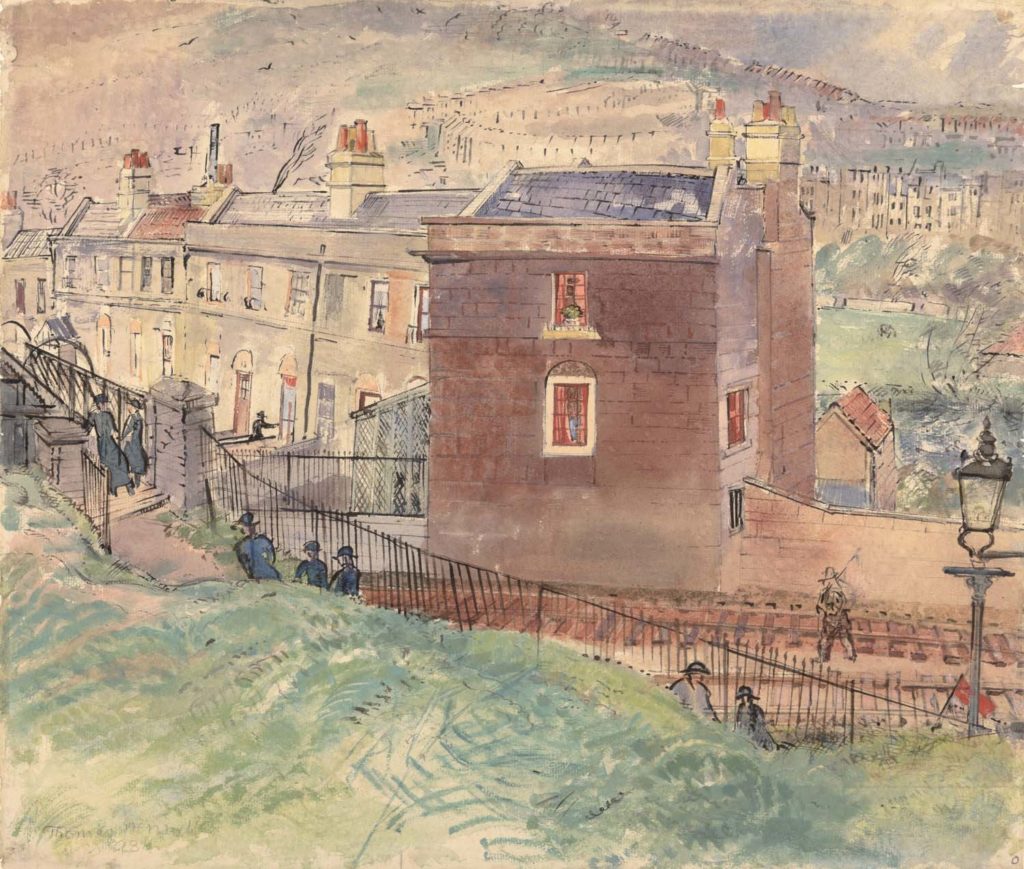 “We have work that will be very familiar and work that has never been exhibited before or since the 1930s,” adds Friend who says about 30% of it relates to Ravilious’ and then Paul and John Nash, Bawden, Barnett Friedman, “but we also have an extraordinary group of women.”

Like most histories of art, the women connected to the Ravilious story have too often been relegated to cameos and supporting roles, but says Friend, works in the exhibition reveal them as major forces in art and design of the period.

“Women in this network did not have the opportunities or recognition some of the men had because of the construct of the art market, or because they got married or the role of women at the time,” he says.

“I am convinced Tirzah began to influence what Ravilious did”

“Certainly Helen Binyon and Tirzah Garwood [who married Ravilious in 1930 but tragically succumbed to cancer in 1951] will strike people as much more considerable artists than they have hitherto been regarded. If you look at Tirzah she is absolutely precocious in terms of her wood engraving.”

Friend has been able to date from her father’s diaries the day Tirzah cut her first wood block. “And 15 months later she’s taken her place at the society of wood engravers alongside John Nash and Paul Nash.”

The show includes a couple of her watercolours – including one of Barcombe in Sussex which “has literally been under a spare bedroom bed” and Friend believes it will “really strike people as almost precursors to some of the stuff that Eric went on to do”.

“I have become convinced, looking at the evolution of Tirzah’s wood engraving in the late 1920s, notwithstanding the fact that Eric was teaching her, she at a very early stage began to influence what he did.” 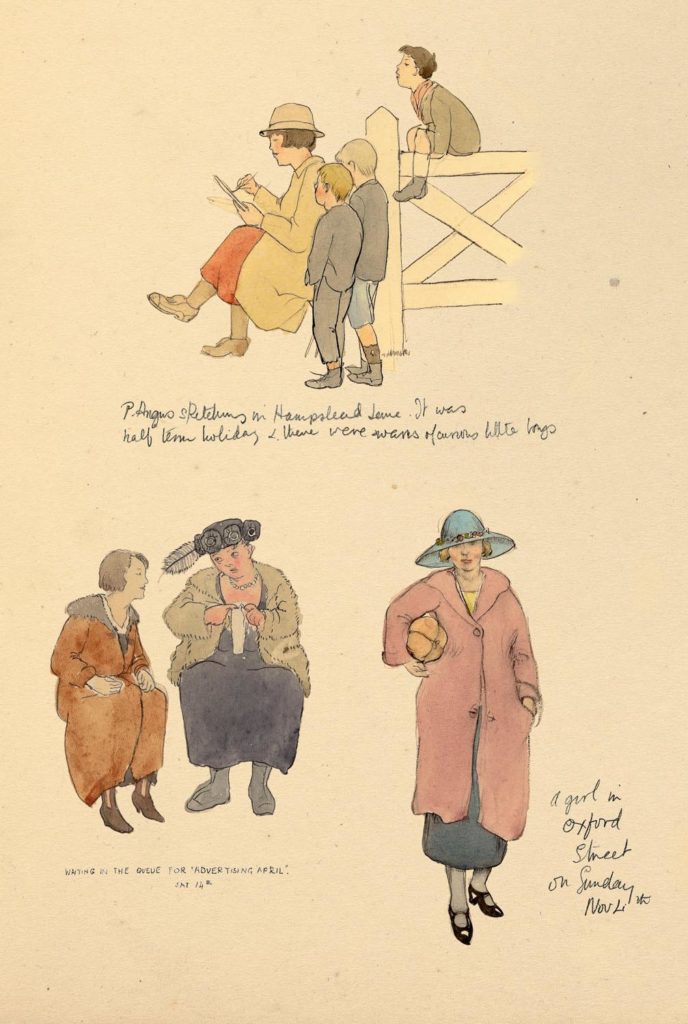 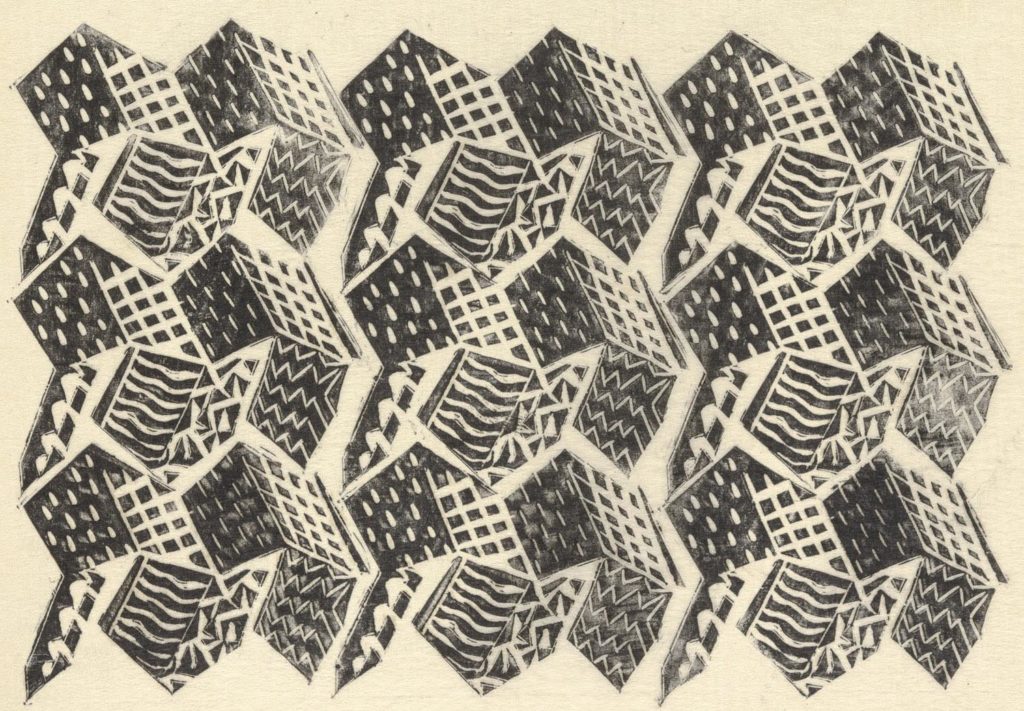 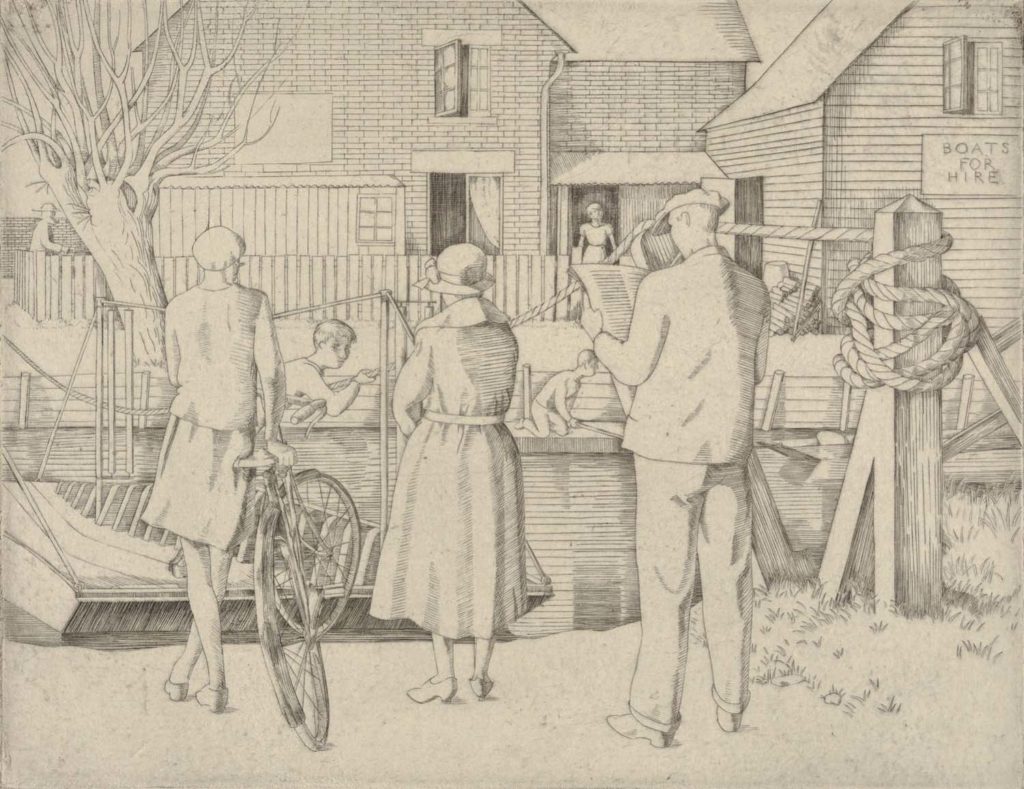 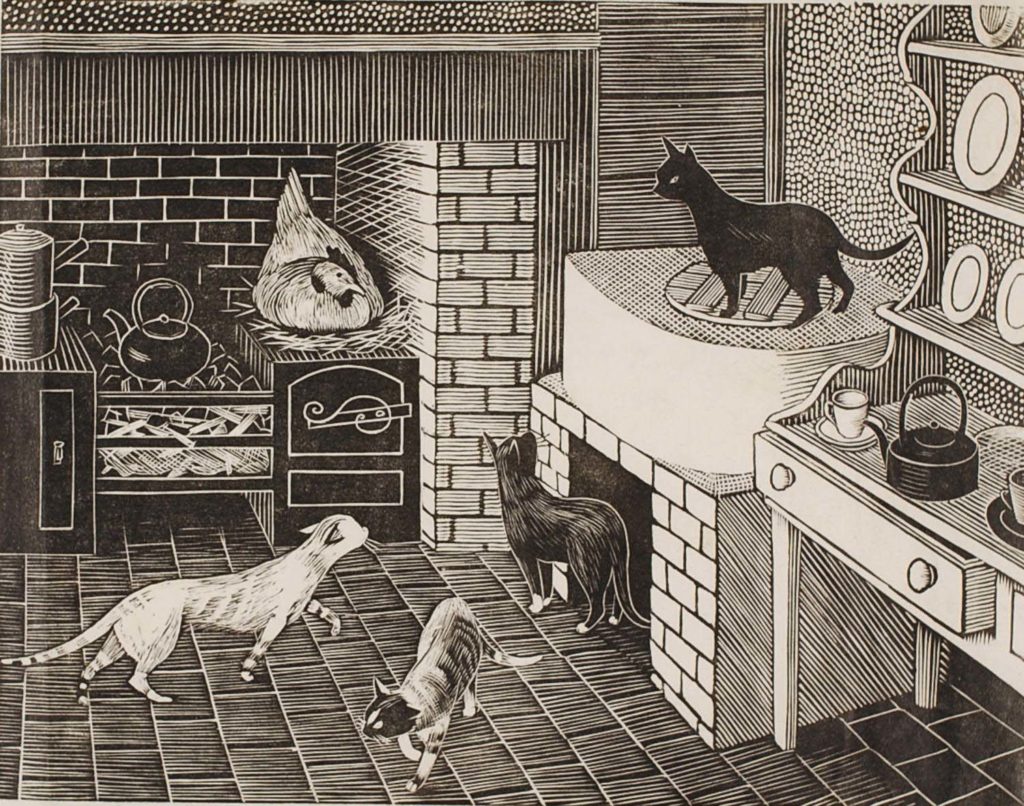 Similarly Helen Binyon who is today principally known for writing the first memoir of Ravilious, “a very interesting book that somehow doesn’t mention that she was his lover,” says Friend, also emerges from the shadows cast by her famous male counterparts. “Helen Binyon had done a lot of things around shops in London before Eric moved onto it with High Street [his 1938 book of shopfronts]” he adds.

Enid Marx is another from the circle whose artworks are represented via “very early, very compelling” woodcut patterns, which have recently emerged from her studio, each of them dated in her hand.

“The nice link with Ravilious is that Enid was struggling in the [RCA] painting school and wanted to become a designer, but the head of engraving in the design school, Sir Frank Short, was something of a patrician and wouldn’t allow her into the class because he said she couldn’t draw well enough. But Ravilious used to sneak her back into the college in the evenings and teach her what he’d learned in the engraving class in the afternoon – and that led on to her early work which we have in the exhibition.”

The interconnections are many – there’s the deep, connecting interests of Ravilious, Nash, Bawden and artist-poet Thomas Hennell in landscape painting; the role of Barnett Freedman in encouraging his peers to take up lithography, which led to High Street and Ravilious’ Submarine Lithographs; and the pivotal location of Furlongs, Peggy Angus’ East Sussex home, where many of Ravilious’ most important landscape paintings were made, as well as his first paintings of interiors.

“And while they are not a movement with a capital m or even really with a small m,” concedes Friend, “they did draw on a shared body of experience and had an affinity through their shared interests. So the theory of the pattern of friendship is based upon their interactions as people but also their interactions as artists.” 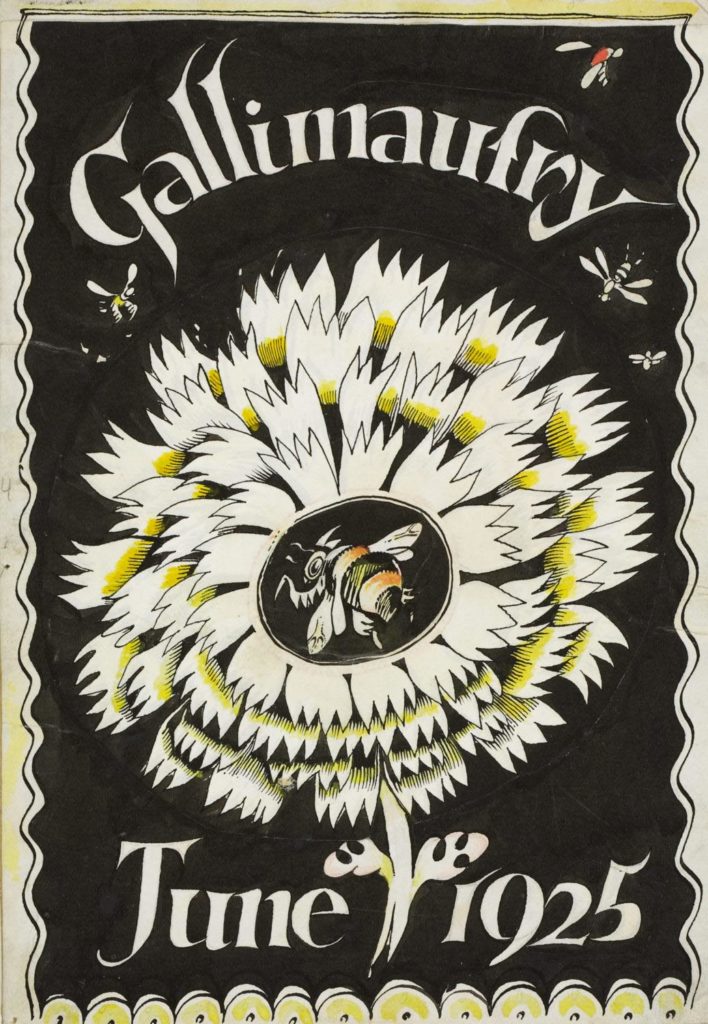 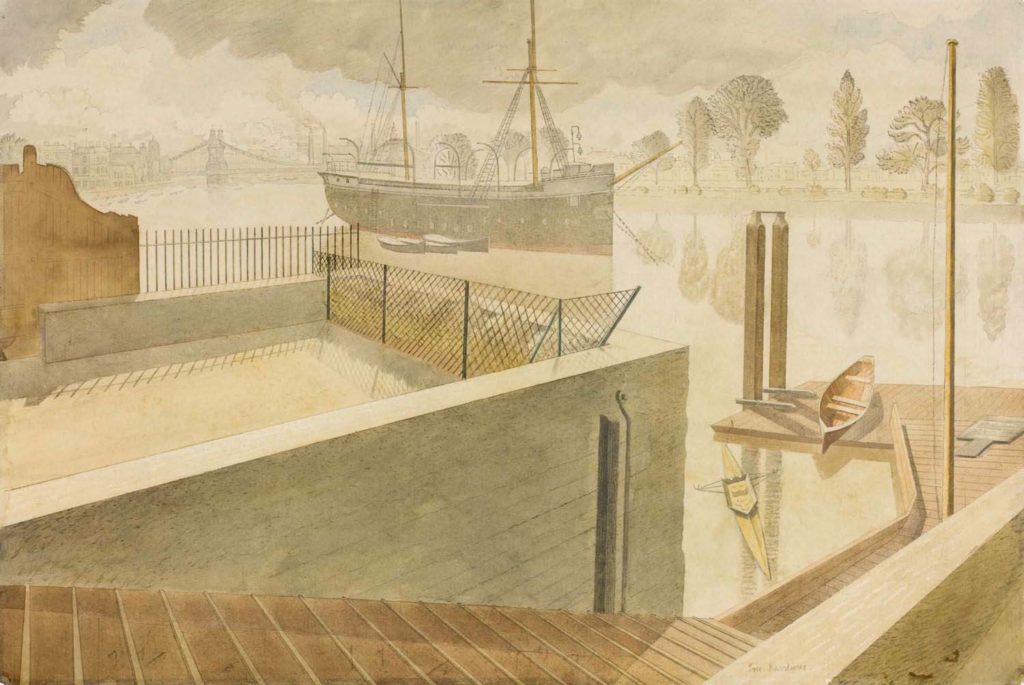 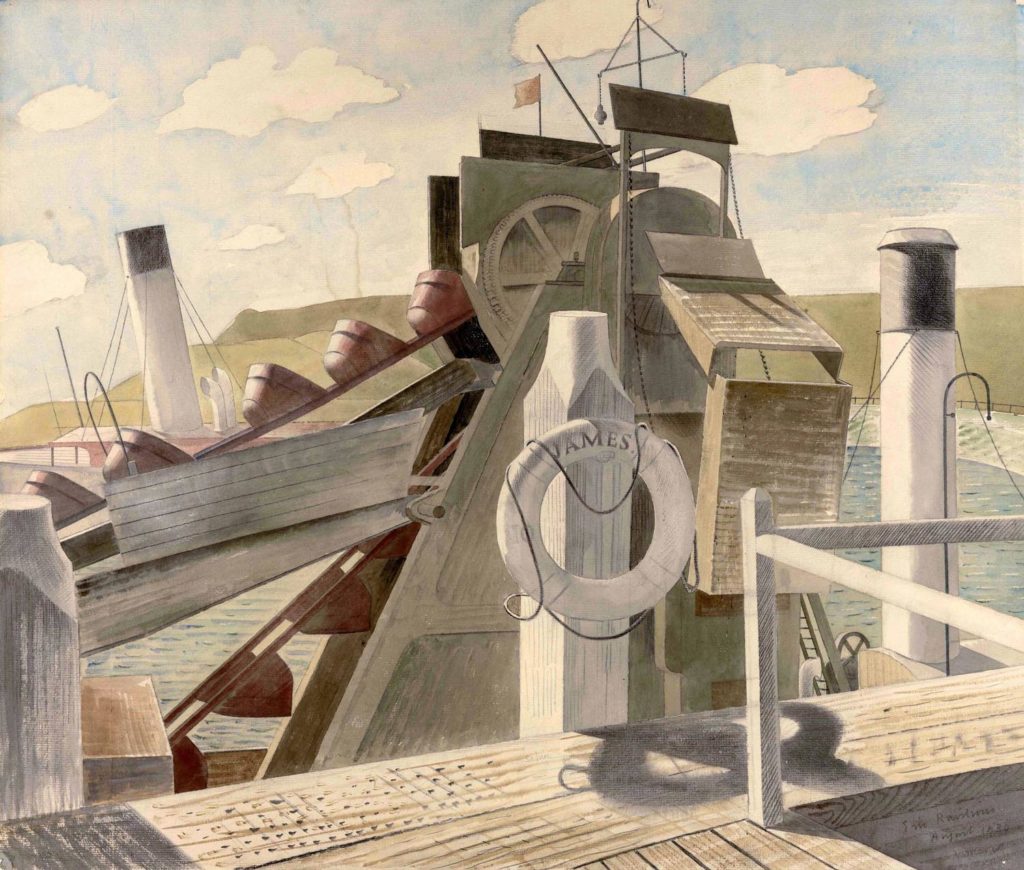 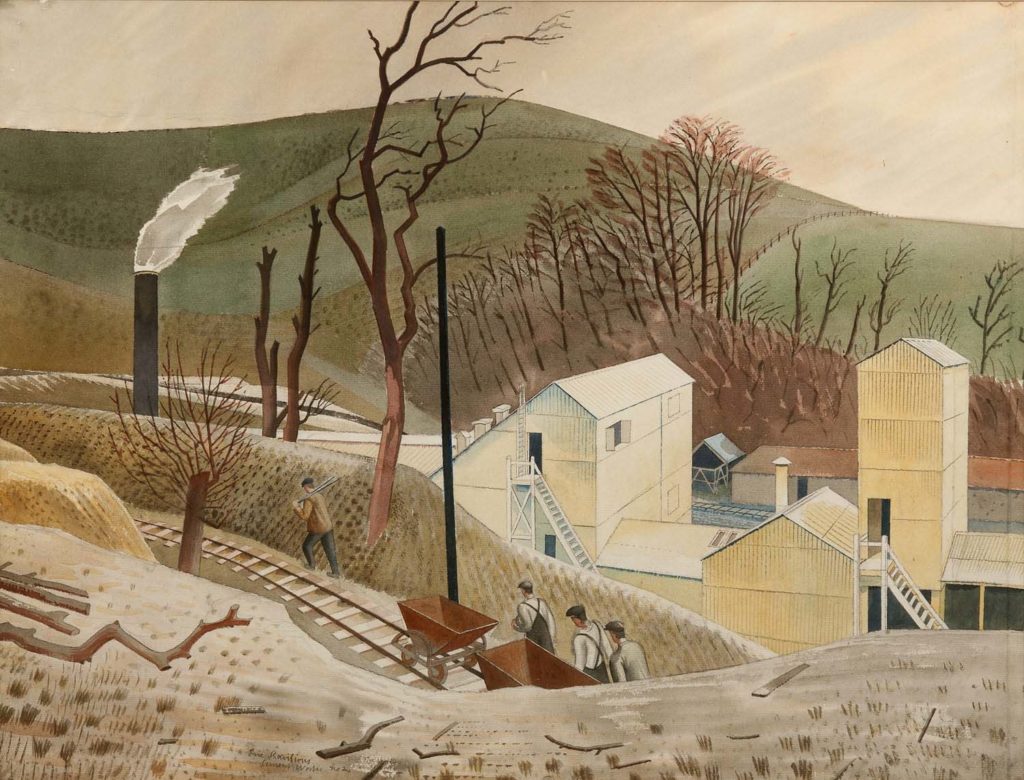 And for those looking to uncover more about the fascinating Ravilious himself, there are some rarely shown works, including a recently discovered painting, HMS Actaeon (1942) and many treasures from the Towner collection, which is the biggest publicly held Ravilious collection in the world, augmented by works from 26 galleries and museums including over 30 private collections.

There’s even some closure on Ravilious’ disappearance in Iceland which, says Friend, “has always been a bit veiled” via the log book from the last fateful flight, and his last letter to Tirzah – his only letter to her from Iceland.

The final word? Perhaps – although it seems there is still much more to be enjoyed if not said about Eric Ravilious.

Ravilious & Co: The Pattern of Friendship by Andy Friend, with an introduction by Alan Powers is published by Thames & Hudson, priced £24.95 hardback. www.thamesandhudson.com